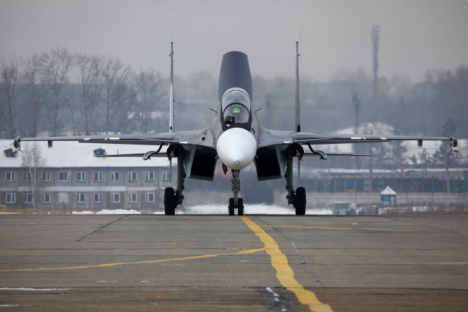 India has finalized a plan to modernize their fleet of Su-30 fighter aircrafts, as a deal with Rafale has yet to be signed and the Indian Air Force urgently needs a stealth aircraft.

An agreement between Russia and India on upgrades to the aging Indian Air Force Su-30 fighter aircraft fleet, sources in the Defense Ministry told Sputnik.

The upgrade process and its implementation were discussed during the visit of Russian delegates early this month.

According to sources, upgrade of the Su-30’s will include adding new avionics, sensors and radar, improving its stealth capability to reduce its radar cross-section, modernization of the cockpit, better electronic warfare capabilities and equipping its long range missiles with an infrared system.

“Indian Defense Ministry has decided to upgrade the Su-30 as there is long delay in materializing the much hyped Rafale aircraft deal and the Indian Air Force urgently needs an FGFA (Fifth Generation Fighter Aircraft) into its squadron. So it has been decided to upgrade and modernize the fleet of Su-30’s to become closer to FGFA,” sources in the Defense Ministry told Sputnik.

According to sources, the upgrade of the Su-30’s will not affect the Indo-Russian Fifth Generation Aircraft Project.

Indian Air Force presently has a shortage of combat aircraft, employing only 33 squadrons while needing a required 45 squadrons.

“Sukhoi is the main fighter aircraft and backbone of Indian Air Force. This aircraft has proved its mettle. The upgrade will definitely make it more sharp and sophisticated. In my opinion, the upgraded Su-30 can match the Rafale up to a great extent. The Rafale is costly and we don’t know when we will get this fighter aircraft. Therefore, upgrade of the Sukhoi should be done as soon as possible to increase our combat capability,” Wing Commander (Rtd) and Former Spokesperson of Defense Ministry, Praful Bakshi told Sputnik.