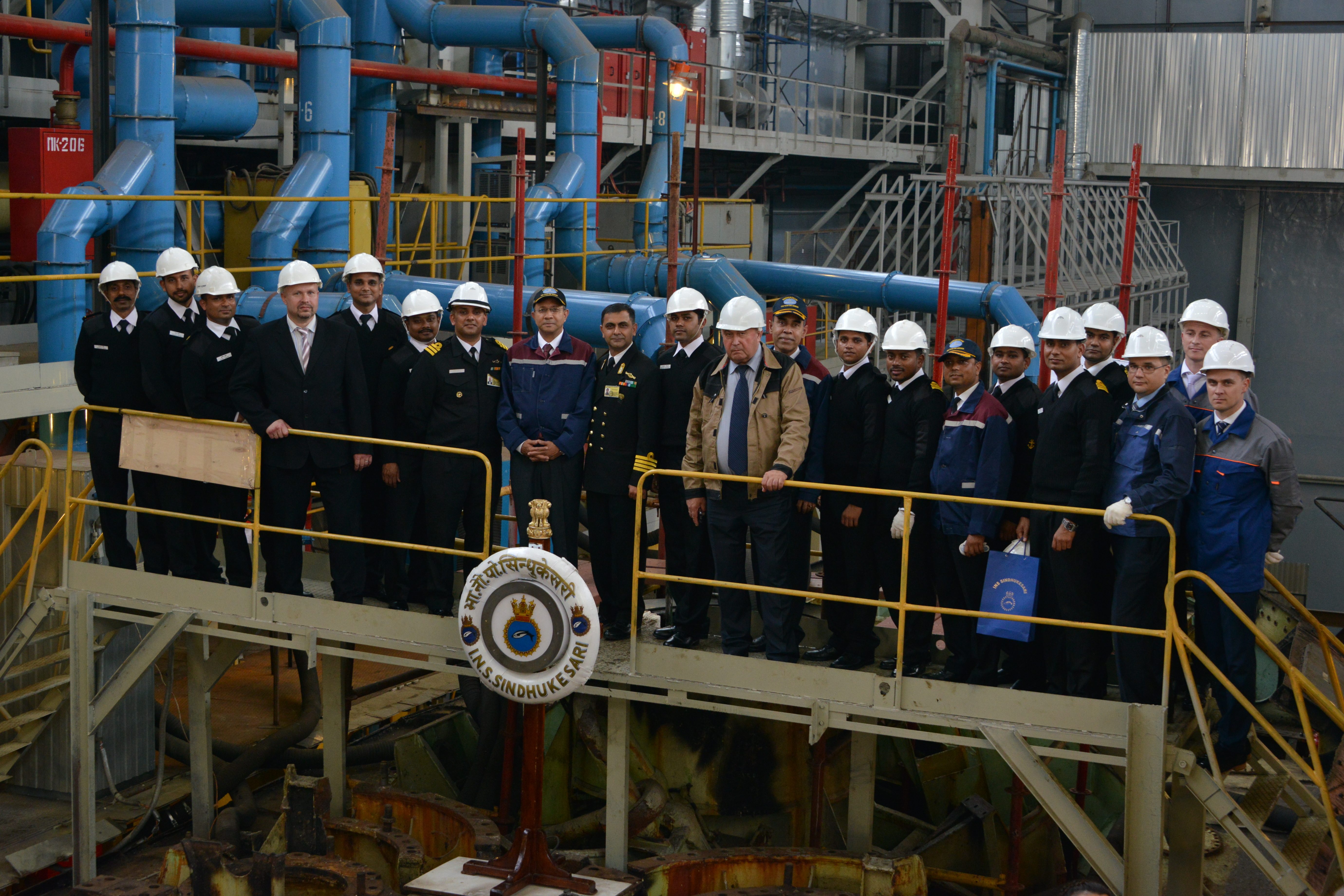 Indian delegation at the defence shipyards in Severodvinsk.

'Zvezdochka' shipyard
A delegation from the Indian Embassy in Russia recently visited the "Zvezdochka" ship repair centre, where the "Sindhukesari" submarine is currently undergoing renovations.

Headed by Pankaj Saran, the Indian Ambassador to Russia, a delegation from the Indian Embassy in Russia visited the defence shipyards in Severodvinsk. They visited the "Sevmash" production association, where aircraft carrier Admiral Gorshkov was modernized into the "Vikramaditya" for the Indian Navy, and also the "Zvezdochka" Ship Repair Centre, where the "Sindhukesari" submarine is now undergoing a refit and repairs.

The Severodvinsk shipbuilders gave the delegation a tour on the slip way and assembly workshop, where the actual works were being carried out.

“I will be frank and say that our people have learned a lot from you, and without your help and support we would not be able to reach the level, where we are at now. And that is why we are now considering which way our cooperation will be further developed, which will allow us to move forward another 40 years in terms of maintenance and modernization of submarines,” Ambassador Saran said, speaking of further military-technical co-operation between the two countries.

He said the question of establishment of a joint Russian shipbuilding venture in India is being looked into. It is possible that this will be done within the framework of the "Make in India" programme, which is now gaining momentum in the country. No time line has been set for the venture.

“For the Government of India and the country itself, one of the main priorities is the development of domestic industry capable of meeting all the needs of the Navy, Army and other military institutions,” Saran said. “That is why today India and Russia want to reach a new level of cooperation – the establishment of joint partner companies, where the two parties have their companies join forces and work on the same project, in order for it to be profitable for the Russian companies too and so that it could work for the benefit of the military and shipbuilding industry in India,” said the Ambassador.

The diesel-electric submarine "Sindhukesari" is the sixth submarine from the Indian Navy to have undergone warranty repairs in Severodvinsk. A contract for modernization of the sub was signed earlier this year and, in June, to supervise the repairs, a group of Indian naval officers and their families arrived in the northern city.

Eugene Gladyshev, head of the press service of the CA "Zvezdochka" said the total number of Indians in Severodvinsk, staying for repairs of the "Sindhukesari," is 53, including 13 children.

The school children are preparing for 1st September, when they will start studying in regular secondary school classes, said Gladyshev. “The wives of soldiers from India are also gradually learning Russian. Usually submarine repairs last about two years. We have special houses for the Indian families to stay, and there are also several other rooms, where they can find accommodation.”

For 20 years now, Severodvinsk has been receiving Indian guests for quite a long stay. The first Indian Navy submarine came to Severodvinsk shipyard for repairs in the mid-90s. During this time, the company has upgraded and refitted five diesel-electric submarines, with roughly around 600 servicemen and monitoring teams working for them, and newcomers to Severodvinsk.

Once a closed town, the people of Severodvinsk have, over this period, got accustomed to the Indian officers, and have fallen in love with many of the traditions associated with India and Indians. Today, no one city holiday is complete without Indian troops’ performances, while the wives always come for events wearing their festive saris.

To ensure that the Indian sailors have a more comfortable stay with their families in the north, the Severodvinsk authorities and the Indian surveillance team leader have signed an agreement on cultural cooperation.