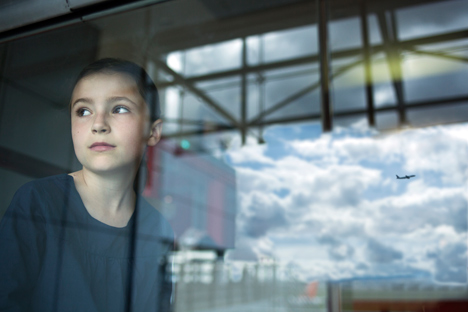 Look to the skies: air travel betweeen Russia and Ukraine has been suspended.

Getty Images
Efforts by Moscow to seek repayment of Ukrainian debt from Kiev have caused discord on the ground. After imposition of tit-for-tat airspace closures, the dispute has now been raised to the skies.

Authorities in Ukraine have agreed to a debt-restructuring plan with private creditors. Prime Minister Arseniy Yatsenyuk said on October 15 that private creditors of Ukraine have decided to write off $3 billion and restructure another $8.5 billion. According to Yatsenyuk, the Ukrainian authorities have offered the same pattern to Russia; cancellation of 20 percent of the debt, an extension of payments toward the principal of the loan, and the establishment of a coupon rate of 7.75 percent per annum, instead of 5 percent.

Dmitry Peskov, the Russian president’s spokesman, however, said the same day that the existing debt of $3 billion must be repaid, or else it would mean a sovereign default. Russian authorities will demand return of this money in the London Court of International Arbitration.

According to the credit-rating agency Standard & Poor’s (S&P), Ukrainian authorities have two ways to repay the Russian government. Ukraine could repay the debt at the cost of its foreign exchange reserves, currently valued at around $12 billion. However, Ukraine cannot take this step because the IMF has urged that its gold and currency reserves should not only not be reduced, they should reach $17 billion by the end of 2015.

Or, Ukraine country could default on these bonds. In which case, according to S&P, the necessary funds can be provided to Ukraine by the IMF. Since the beginning of 2015, Ukraine has received $9.7 billion from international organisations and, as Ukrainian finance minister Natalie Jaresko said on October 16, the country will receive another $4 billion from international partners by the end of 2015. In this case, the IMF loan would effectively go to the payment of Ukraine’s debt to Russia, a scenario unattractive to the western creditors.

“The IMF is unlikely to go for the provision of a loan to allow Ukraine to repay its debt to Russia,” said Andrei Margolin, vice-rector of the Russian Presidential Academy of National Economy and Public Administration. According to Margolin, politics dominates economics on this issue, and Ukraine’s debt to Russia falls into the category of sovereign debt.

“In accordance with the rules of the IMF, the programme of financial support for Ukraine would be suspended until the settlement of the public debt,” Margolin explains.

A similar position is shared by Alexander Krasnov, Verum Option analyst, who maintains that the IMF’s statute prohibits lending to countries that do not repay their public debt.

The Ukrainian authorities understand that the sovereign nature of the debt is a problem and try to challenge it, explaining that it had been issued to the previous regime. In late 2013, Moscow decided to support the Ukrainian economy, and agreed with then-president Viktor Yanukovych a loan of $15 billion.

At the expense of Russia’s National Wealth Fund (it consists of the revenues from the sale of hydrocarbons abroad), it was supposed to redeem the Ukrainian bond loan. The repayment of the bonds was scheduled for Dec. 20, 2015, and the coupon rate was 5 percent. At the same time, one of the conditions of the loan was the obligation to return the funds early if the total Ukrainian debt exceeded 60 percent of gross domestic product.

The Russian government only had time to transfer the first tranche of $3 billion to Mr. Yanukovych before Ukraine was hit by a political crisis, which led to the ousting of the president and a regime change.

Despite the loud rhetoric, however, Kiev seems to have an understanding that to deny the sovereign nature of the debt will be difficult in practice. Adam Derrick of the American Enterprise Institute sees a possible solution to the problem in offering Moscow a renegotiation on the terms of the loan, offsetting a preferential rate (5 percent compared with the market 12 percent) and at the same time placing it into the commercial category. However, judging by the current rhetoric in Moscow, it is unlikely to agree.

The restructuring of Ukrainian bonds is not the only stumbling block for economic relations between the two countries. On Oct. 25, 2015, direct flights between Russia and Ukraine were halted. “We have received an official notification that all Russian companies will be prohibited from the use of Ukraine’s airspace,” Russian transport minister Maxim Sokolov told RIR.

According to Oleg Panteleyev, head of analytical services at the Aviaport agency, “the decision to ban flights of Russian airlines to destinations in the territory of Ukraine is connected with Kiev’s objections against flights to Crimea conducted by these airlines”.

At first the ban did not extend to the airline UTair, which does not carry out flights to the peninsula, but later it was also included in the list. As a result, the sanctions will take effect against all Russian carriers. In response to these measures, the Russian authorities closed Russian airspace to Ukrainian aircraft. According to Mr Sokolov, the passenger traffic between Russia and Ukraine – despite its continued decline since the end of 2013 – amounted to 100,000 people per month in the first eight months of 2015.

“Given that Russian airlines made several times more flights between the countries than Ukrainian carriers, it is clear that their nominal losses from the closing of regular flights will be higher,” says Boris Rybak, a civil aviation expert with Infomost. “However, the loss of Ukrainian direction for Russian airlines is a loss of maybe half a per cent of the total passenger traffic. Of course, in real economic terms, any loss is bad, since air carriage teeters on the brink of profitability, and the situation is not healthy. But if Russian carriers are able to survive the closing of the Ukrainian direction, it is not a fact that the Ukrainian companies will survive the loss of the Russian route.”