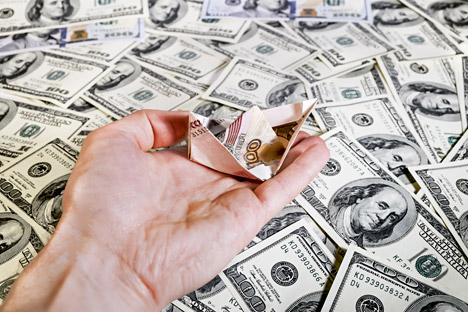 Since November 2014, foreign exchange value has been unregulated by the Russian Central Bank.

Shutterstock/Legion Media
The Russian national currency lost half its value in the space of just a year.

The ruble has lost half its value in just over a year.

The value of foreign exchange has been unregulated by the Russian Central Bank since November 2014. When Russia's Central Bank gave up selling dollars from its reserve fund to buy rubles, Russia's national currency swiftly began to lose value. The decision, said experts, was forced by rapidly declining prices of crude oil.

Analysts are divided on the bank's actions, with some suggesting that regulatory control could make a comeback in 2016.

"It would have been practically impossible for the Central Bank to restrain the further fall of the ruble with foreign currency interventions," says Fin Expertise analyst Natalya Borzova.

"The liberalization of the exchange value helps the economy react to the realities of the market more flexibly. In particular, oil-producing countries, where the value of the national currency is fixed to the dollar, encountered a 20 percent budget deficit that had to be compensated with reserves," explains Alexander Kuptsikevich, financial analyst at FxPro. Essentially, the Central Bank had no alternative, he said.

Ekaterina Vlasova, an analyst at Citi Research, believes the Central Bank changed the ruble to a free-floating regime rather quickly. "It became possible thanks to the preparatory stage in the course of which the Central Bank gradually increased the ruble's flexibility."

Dmitri Savchenko, analyst at Nordea Bank, said immediately after the liberalization, the ruble's exchange rate dependence on the price of oil increased by 88 percent. This is evident when the ruble exchange rate peak values are compared to oil prices (see diagram).

Vlasova adds that besides oil prices, geopolitical risks and Russian domestic factors also affect the ruble's exchange rate - interest rates, tax payment periods and repayment of foreign debts. Nevertheless, the dependence on oil was the main factor. The situation changed only in the last months of 2015. In December, with the fall of oil prices to $36.4, the ruble's exchange rate increased to 70.55 rubles per dollar. But the ruble had reached this level in August when oil prices had not fallen to such low levels.

"This means that if there was an absolute correlation between oil prices and the ruble exchange rate, the dollar would now cost 88.8 rubles, not 70-71," remarks Alexander Abramov, a professor of Capital and Investment Markets at Moscow's Higher School of Economics. "That is, the monetary authorities were able to significantly decelerate the falling value of the ruble in comparison with the fall in oil prices."

However, since its liberalization the ruble has "depreciated by practically 50 percent against the dollar," says Vladimir Rozhanovsky, director of the analytical department at OK Broker. "In such a situation it has certainly become easier filling the budget, but at the same time export-import activities are having difficulties."

Due to sanctions on the Russian financial sector, industry has been deprived of inexpensive western financing, adding to industry's losses. "A large part of industry's expenses goes towards equipment, components, electronics, which they buy abroad," Rozhanovsky adds.

If the Central Bank had not let the ruble go, losses related to devaluation would have been less than a third of what has been witnessed, he says. He also suggests that in 2016 it is possible the bank will re-introduce controls over the ruble.

The Central Bank admits that the weakening of the ruble has clearly had an impact on industry. "However, the positive contribution of growing export revenues [in export-oriented production - RIR] has exceeded the negative impact of the exchange rate dynamics on expenses," its press office says.

The bank does not intend to toughen its exchange rate policy, the press office adds. "At the same time the Russian Central Bank reserves the possibility to perform currency interventions to support financial stability."