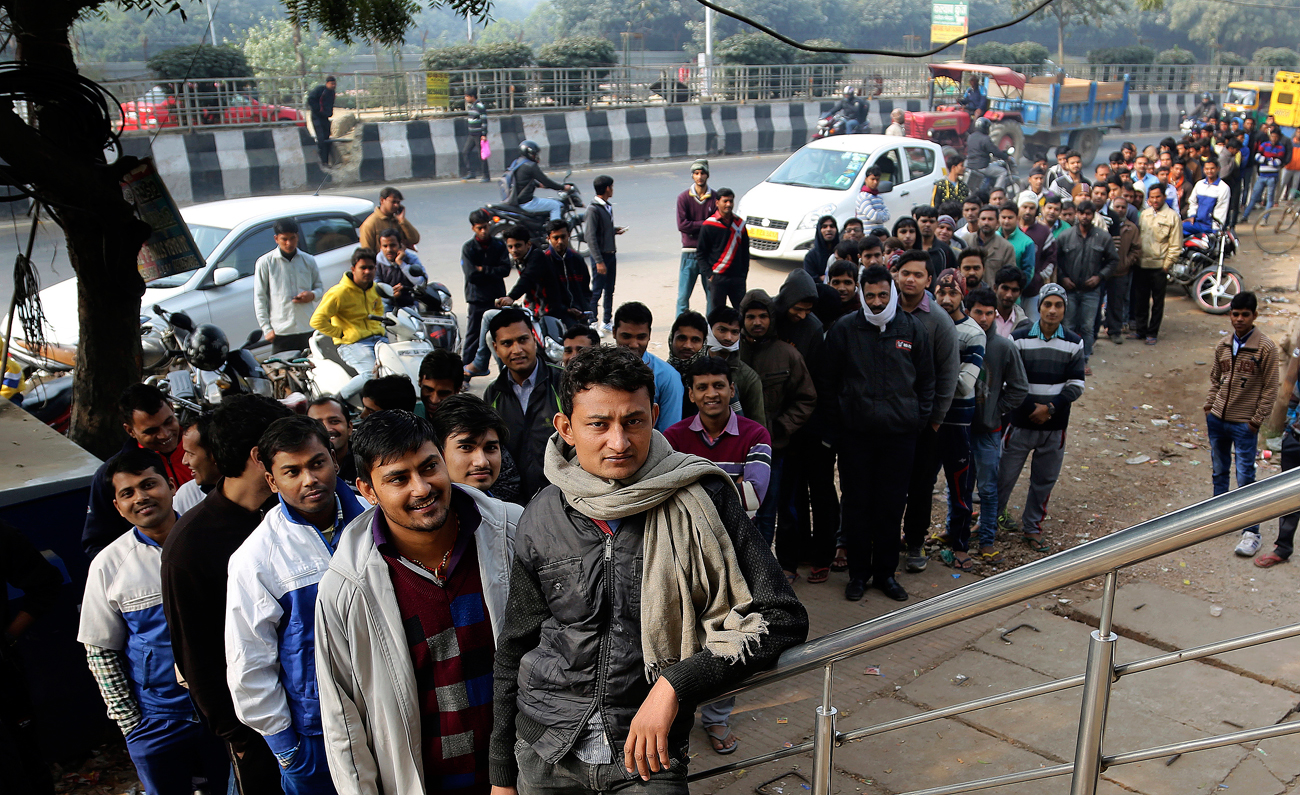 Indians wait outside a bank to withdraw money on the outskirts of New Delhi, India.

AP
New Delhi is scrambling to try and reassure diplomats that they will be given priority by banks in India and will not need to stand in queues to withdraw money. The scarcity of cash after the Indian Prime Minister suddenly declared high denomination currency illegal has seriously hampered the functioning of diplomatic missions.

Standing accused of violating the Vienna Conventions on Diplomatic Relations, India on Thursday began a priority diplomatic outreach exercise to try and relieve the problems diplomats in India were encountering since the demonetization of high value currency a month ago.

Faced with an avalanche of complaints, most recent among them from Russian Ambassador Alexander M Kadakin, Indian Foreign Secretary Subrahmanyam Jaishankar on Thursday met Frank Hans Dannenberg Castellanos, the Dean of the diplomatic corps, who represents 157 foreign embassies in India. The Dean is chosen by the diplomatic missions on the basis of the length of the ambassador’s tenure in the country.

“Foreign Secretary has met the Dean of the Diplomatic Corps,” said Vikas Swarup, spokesman for the Ministry of External Affairs (MEA). “They discussed the issues raised by foreign Missions and how best to address them,” Swarup said.

Accepting that India had placed hurdles in the functioning of foreign missions, as outlined by the Vienna Conventions, Swarup said, “It’s a fact. The Vienna Convention clearly says that foreign diplomatic missions are to be allowed to function unimpeded. So, certainly he (the Dean) has raised it in the context of the Vienna Convention and we have given a very sympathetic hearing,” the MEA spokesman said.

“With a view to avoid inconveniencing their (diplomatic) operations, the Ministry has been in discussion with concerned authorities in the Government on this matter,” Swarup said. “The Finance Ministry, as a consequence, is being asked to issue directives to banks to allow Embassy officials with identity cards to withdraw money on a priority basis.”

Earlier Castellanos, Ambassador of the Dominican Republic, said several embassies, upset by India's restrictions, were studying the possibility of "reciprocating" similar steps against Indian diplomats in their countries.

He said the Indian Prime Minister had initiated the move (demonetization) and he should deal with the problems diplomatic missions were facing.

"The fact that we cannot access our own funds in our bank accounts is a serious breach of Vienna convention and international diplomatic principles. This is the main constraint of a lot of ambassadors," Castellanos said, adding the Rs 50,000 a week cap on withdrawal must be lifted.

Among those who lodged a very strong protest was Russian Ambassador Kadakin who, in a letter to the MEA dated December 2, had said the withdrawal limit, of 50,000 rupees per week for all embassies, was not even enough to “pay for a decent dinner.”

“Please just imagine if we in Moscow mirror this order of SBI (State Bank of India) when 50,000 roubles will not be enough to pay for a decent dinner in a restaurant, not to mention functioning of such a big embassy as ours in New Delhi or India’s in Moscow,” Ambassador Kadakin wrote.

“SBI informed the Embassy that the cash withdrawal limit available to the Embassy is now Rs 50,000 per week under the government of India directives with no exceptions unless otherwise advised by the RBI. Such an amount is totally inadequate as regards the embassy’s salary and operational expenditure requirements,” the Russian Ambassador reiterated.

“The (Russian) Embassy must be in real difficulty,” a senior official told RIR. “Otherwise, Kadakin would never have protested so strongly. He is a big supporter of India and has always been very pro-active in pushing closer bilateral relations. He has also supported most Indian government initiatives,” the official said.

After the meeting on Thursday, Ambassador Castellanos said, “Although we are waiting for a formal response (from the MEA) to the issues brought up by the Diplomatic Community, I personally feel very positive by the time and effort taken by the Foreign Secretary to listen in detail to all the concerns of my colleagues, to jointly find solutions not only for the day to day operation of our Diplomatic Missions but also of the difficulties our Nationals are having as Tourists and those coming to India for medical treatment,” he said.

Dean Castellanos added, “The Diplomatic Community is sensitive to the temporary difficulties that affect the whole population of India, and hope that the  measures bring the expected positive results in the future, for a more transparent destination for Foreign Investments from our countries and a healthier overall economy for the future of India and its people”.

“We are confident that the Missions would bear with the temporary difficulties that arise in that process, even as we seek to address their concerns,” the MEA spokesman said.

However, he did not have any time frame to offer by which time the matter of cash shortages would be resolved, or when the limit of 50,000 rupees a week per Embassy would be raised.

“We have taken already one step,” Swarup said, for banks to give priority to diplomats. We have also agreed now to see what more we can do to minimize the inconvenience,” he said.

Swarup declined to state what recommendations had been accepted by an inter-ministerial Task Force set up soon after November 8, when Prime Minister Narendra Modi announced that high value notes, worth 1000 and 500 rupees, would become illegal.