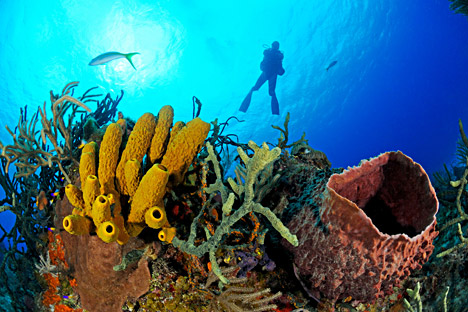 Alamy/Legion Media
Researchers claim to have discovered a new anti-tumour agent in the Far East. During an ocean expedition along the coast of the Kuril Islands, Russian scientists isolated a unique compound from a sea sponge in the Far East. It apparently causes the self-destruction of cancer cells.

Researchers have found a new anti-tumour compound, Monanchocidin A, in a sea sponge towards the country’s Far East, called Monanchora pulchra, which inhabits the northwestern area of the Pacific Ocean.

The research is being conducted by the G. B. Elyakov Pacific Institute for Bio-organic Chemistry (PIBOC) in Vladivostok and the Experimental Oncology Laboratory of a German clinic in Eppendorf, Germany.

“This is a very rare mechanism, and the compound is one of very few such findings,” PIBOC Director Valentin Stonik (RAS) told RIR. “We have isolated a new mechanism of action which opens up possibilities for creating new anticancer drugs.”

Sea sponges are already known as “suppliers” of powerful anti-cancer drugs. In 2014, researchers at Leeds University in the UK isolated and procured the drug Eribulin, used against breast cancers, from the sponge Halichondria okadai. This substance does not cure cancer completely, however, as was demonstrated during clinical trials on 1,800 patients. It extended their lives for an average of five months.

The biologically active substances in the Far Eastern sea sponges, Monanchora pulchra, however were being investigated for the first time.

“Our institute conducts multi-year research in the ocean. We have the 47th Expedition working in the area of the Komandor and Kuril Islands,” said Stonik. “Biological testing of collected specimens and the extracts and fractions obtained from them is done right on board the scientific research vessel Academic Oparin. On this basis, subjects are selected for further study. On one of our previous expeditions, this sea sponge was chosen for research with the purpose of obtaining new natural compounds.”

This unique compound, Monanchocidin A, was isolated during the expedition. In 2010, Tatyana Makareva, a Doctor of Chemistry, commenced her research in the Institute’s laboratories. Study of the anticancer properties of the sponge has now been underway for five years.

Drug discovery: when will there be medicine?

The researchers consider it too early yet to speak of how much more effective or safer Monanchocidin A is than existing drugs. This will require additional pharmacological studies. “We found the prototype for the creation of new medicines, that is, we have isolated an individual substance, determined its structure and studied the compound. This is a very complicated and drawn-out process,” Stonik explained to RIR. “However, we can already say that the discovery makes possible the creation of new groups of anti-cancer medicines.”

The findings of the coastal scientists show that the drug resistance of cancer cells can be overcome. Trials were conducted on the agent Cisplatin; one of the most common drugs in clinical practice. It turns out Monanchocidin A is capable of killing tumour cells resistant to classical medicinal drugs.

The scientists are now planning the next stage of their work. They will seek how to obtain the new compound in large quantities through organic synthesis or with the help of biotechnology. Also, other compounds must be studied in greater detail for safety and other vital properties. If tests were only conducted on individual types of tumour cells earlier, it will now be necessary to begin substance testing on animals.

“For now, it is only the beginning of the road, but it is very promising,” said Stonik. “We are now at the stage researchers call ‘drug discovery; the emergence of the idea for the creation of a new medicine.”