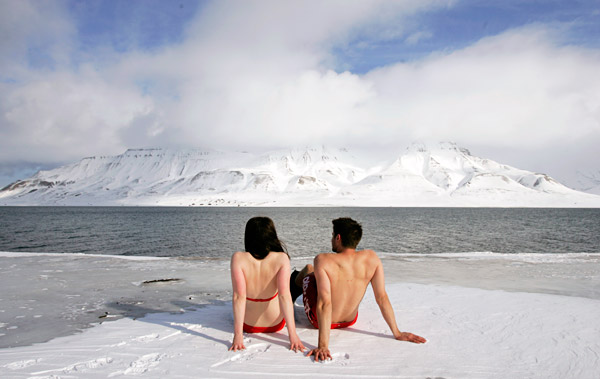 Reuters
Around 700 new ‘methane holes’ found in the Arctic shelf by Russian scientists show how fast these emissions are heating up the region. Given the scale of hot air emissions, it is likely the permafrost has been severely degraded, and the thaw irreversible.

Carbon and hot gaseous emissions from small water bodies in the Arctic continental shelf have emerged as a major cause of concern, more worrying than the speed of thawing Arctic glaciers.

Having spent 20 years studying water bodies formed when permafrost thaws, a team of Russian scientists have found that these thermokarst lakes are sources of carbon dioxide and hot methane gas. More recently, they have begun to grow rapidly, making it difficult to recognize them on satellite images compared to a couple of years ago. The coastline, in some areas, has shifted as much as 70 metres in a few years.

For decades, researchers at Tomsk State University (TSU) have studied the West Siberian subarctic, an important natural zone of the Northern Hemisphere. Their main research facility is Khanymey scientific station, located in a small village of Russia's Yamalo-Nenets region in the Arctic Circle. The size of these local wetlands surpasses the area of the Scandinavian, Canadian and Alaskan wetlands several times over.

“The soil organic carbon, also known as peat, transforms into carbon dioxide the fastest while in water,” said Sergei Kirpotin, head of TSU’s BioKlim Land research centre. “Over 80 percent of subarctic Siberia is covered by thermokarst lakes, but the scale of the carbon dioxide flow still has not been evaluated by anyone, and neither has the chemical composition of the water. We are currently working on it together with our colleagues from Sweden and France as part of the Siberian Inland Waters international initiative.”

Researchers discovered that smaller lakes with a surface area under 100 square meters, which are virtually undetectable by satellites and do not show up on any maps, emit several times more greenhouse gases than bigger lakes. There are millions such tiny lakes in the Siberian tundra, and due to their negligible size until recently they were not taken into account within existing carbon exchange models.

Because of the increasing permafrost thawing in West Siberia, the bigger thermokarst lakes could soon break up into numerous smaller ones. “This could lead to a tenfold increase of greenhouse gases and dissolved organic carbon emissions into rivers and the Arctic,” said Kirpotin.

An even more serious problem than the thermokarst lakes are the processes that occur within the Arctic continental shelf. Carbon emissions in the form of methane and carbon dioxide are already having a significant impact on Earth's climate.

“Five years ago we discovered that the massive methane emissions that occur in the seas of the western Arctic are about two times larger than emissions in all the world’s oceans,” said Igor Semiletov, a geochemist at the Pacific Oceanological Institute and Tomsk Polytechnic University.

In 2014, an international research team led by Semiletov set sail to the Arctic Ocean on the Oden icebreaker science vessel. The researchers were the first to closely examine the waters of the outer West Arctic continental shelf at depths below 50 meters, and it turned out that carbon emissions in the shelf zone are much more intense than expected. Up to several hundred grams of methane per square meter are emitted daily, which shows that the underwater Arctic permafrost has been degrading severely. About 700 such “methane holes,” each up to a kilometer in diameter, have been found in the shelf.

“We are finding more and more evidence confirming our hypothesis about the leading role of the Siberian continental shelf in changing Earth’s methane balance at the present time and for at least the past 400 years,” said Semiletov. “We are now experiencing what is called an interglacial period, during which sea levels rise.”