Russia plans to save Earth from asteroids 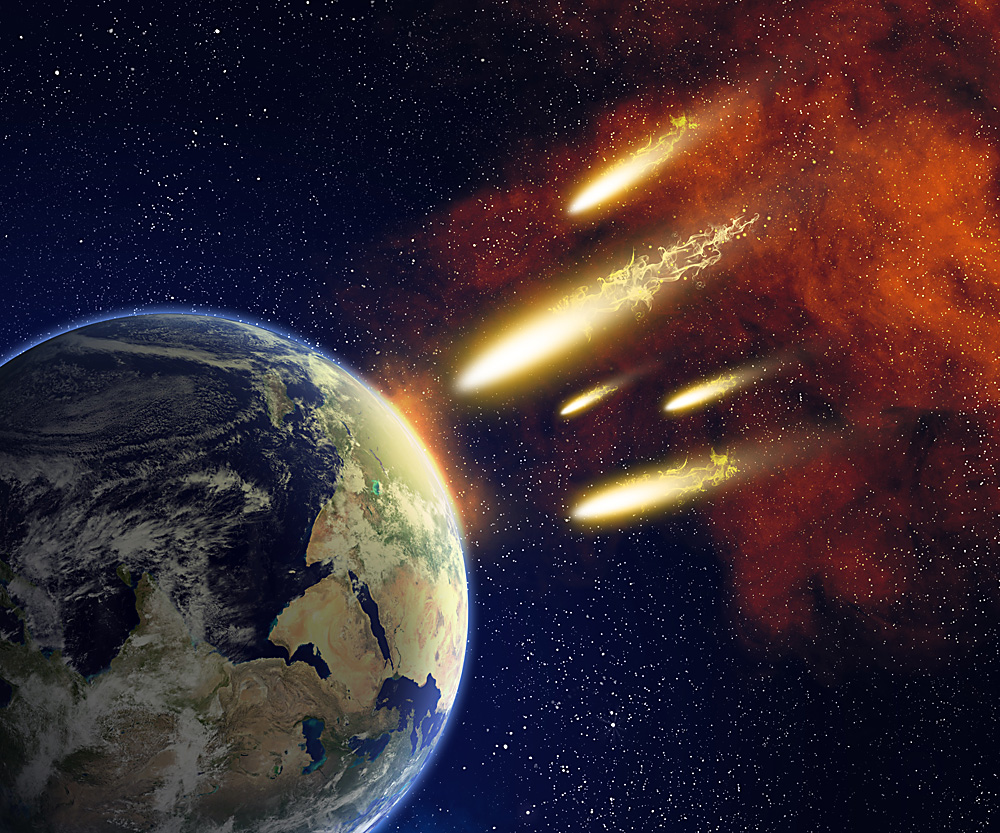 The total number of asteroids approaching our planet is estimated at more than 11,000. Source: ShutterStock

Destroying asteroids in orbit as they move away from the Earth is one way, Siberian scientists have suggested. The required explosive force however, can only be provided by nuclear weapons, the use of which are now banned in space.

A great many asteroids pass by the Earth at regular intervals, changing their orbit only slightly.  Some Siberian scientists have suggested a way to neutralize these dangerous space visitors by destroying them in orbit as they move away from our planet.

More than 11,000 asteroids are estimated to be approaching our planet. Scientists say that only 39 asteroids, however, will get close enough to pose a serious threat to life on Earth over the next two centuries.

Although chances of a giant rock approaching the Earth unnoticed are almost zero, asteroid bodies with a diameter less than 300 metres can creep up suddenly on humanity. Even such small asteroids, should they fall to Earth, can wipe out an entire metropolis or even an entire country.

Scientists from various countries are working on how to change the trajectory of an asteroid that threatens the planet. Choosing the method of protection depends on the asteroid's size: it can either be deflected, or shattered.

Nuclear bombs to the rescue

Scientists from Tomsk State University, along with colleagues from other scientific institutes, have suggested neutralizing the potentially harmful space objects by blowing them up after they move away from the Earth.

"With the aid of the SKIF Cyberia supercomputer we modeled an asteroid's nuclear explosion in a way so that its highly radioactive debris does not fall to Earth," explained Tatyana Galushina, an expert at the Scientific Research Institute of Applied Mathematics and Mechanics at the Tomsk State University.

"For this reason, we suggest to eliminate such an asteroid not as it is approaching the Earth, but at the moment when it is moving away from us. This will be much safer and more effective."

Scientists chose a hypothetical celestial body with a diameter of 200 meters as their target in their computer simulation experiments. This is similar to the Apophis asteroid, which will approach the Earth at a distance of 38,000 kilometres in 2029. An explosion equivalent to one megaton of TNT would be required to destroy an object of this size. That is 50 times more powerful than the atomic bomb dropped on Hiroshima in 1945.

What about the debris?

How safe is this method and will the debris not fall to Earth if it is decided to destroy asteroids with nuclear weapons?

"Computer models show that such an explosion will turn part of the asteroid into gas and liquid, while the other part will shatter into debris that is no more than ten metres in diameter,'' explained Galushina. “This size is an acceptable limit in terms of safety for the Earth. Also, since the nuclear missile will strike the asteroid from behind, practically all the fragments will fly ahead, away from the Earth."

Some scientists added, however, that after the explosion the Earth may once again encounter the destroyed asteroid's debris floating in the usual orbit. But the models show that any shower of meteorites will be practically unnoticeable.

"The debris will be distributed along the course of the orbit, and only insignificant amounts would fall to the Earth,'' remarked Galushina. "In our experiment, only one fragment out of 100,000 fell to Earth.''

This idea, however, has its critics. Scientists from the Tomsk Polytechnic University say it is still too early to imagine that results from the supercomputer simulation will correspond to reality. Critics point to the fact that only nuclear weapons can produce an explosion with the necessary power, but the use of these weapons is prohibited in space. Additionally, the precision needed to hit an asteroid is also a problem that must be solved.