No rules & total freedom: This family’s lifestyle SHOCKED the public in USSR 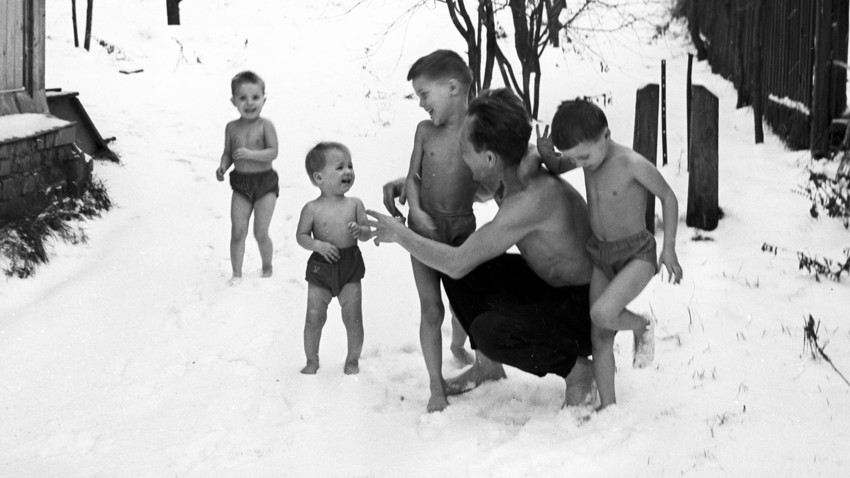 G. Sherbakov/Sputnik
Since infancy, the Nikitin family’s kids were raised to be healthy, independent and creative, through hardening, lack of parent control and abundance of activities. Were they right?

A simple wooden house in the countryside. Two small boys and a little girl, wearing just underwear, are playing in a room strewn with toys, books, instruments, and sports items. The oldest, four-year-old Alesha, is solving math equations on a chalkboard. Olya, who’s just a year and a half, and has just recently learned to walk, is hanging on an exercise bar mounted to the wall. After turning upside down, she laughs.

The kids quickly go from one activity to another - one moment they are preoccupied climbing up the wall ladder and, a bit later, the boys switch to making toys with a real saw in their small workshop. The mother doesn’t seem to worry seeing all this. She takes her youngest Olya for a quick nap on the terrace (despite it being winter outside) and later, the kids run out into the snow, almost naked and barefoot, to greet their father who is coming back from work.

That is just a glimpse into the life of the Nikitins, a Soviet family whose practices both inspired and shocked the public in the 1960s. Their approach to early childhood education differed a lot from the mainstream Soviet system, that raised kids to be part of a bigger society from kindergarten, with a certain daily schedule. The Nikitin kids, however, were free to choose what their day would look like and any communication and/or interaction was mainly limited to within the family until school started. 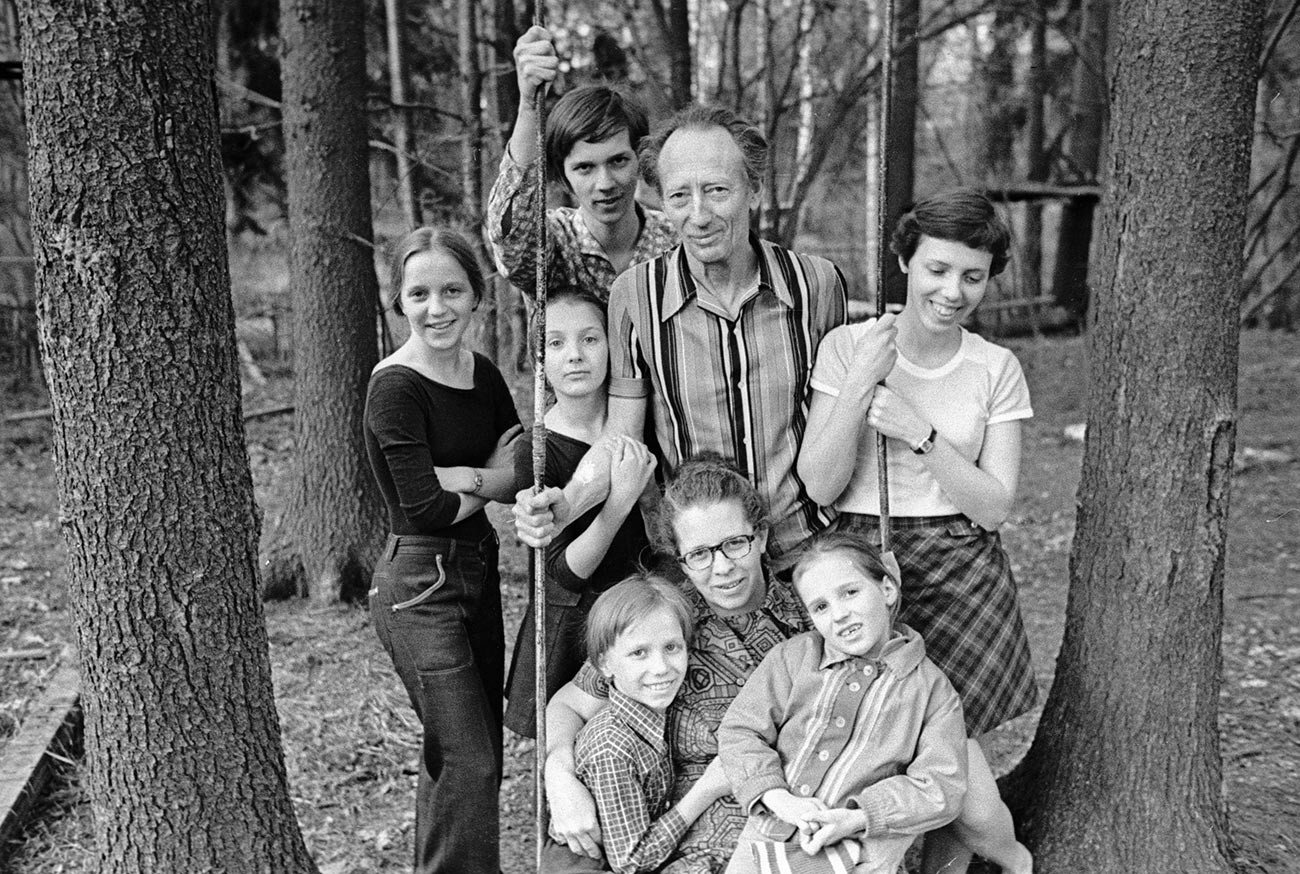 Even though there was a child welfare service within the Soviet state system, they didn’t mind the Nikitin lifestyle - there were never any serious problems or accidents within the family, meaning there was no cause for alarm.

Teachers and researchers Boris and Lena had seven children together over the years and authored more than 10 books on early childhood education. Their works were published not only in the USSR, but also in countries like Germany and Japan, and secured them wide popularity, which also annually drew hundreds of visitors and journalists to their house in the village of Bolshevo, outside of Moscow.

Why did they allow their children to play freely without limits and constant parent control? And was their approach successful in the long run?

Freedom of movement and immunity to cold

Former aviation engineer Boris Nikitin had a strong interest in pedagogy. He had even wanted to open his own school, but his vision had no state support. It was in 1959 when he met his future wife at one of the pedagogical events in Moscow. Lena (not short for Elena, as she was named after the Russian river Lena) was a Russian language and literature teacher and was 14 years younger than Boris, but common interests and views on life quickly brought them together. They both were dissatisfied with the existing teaching system.

And it so happened that they started a family together, which ended up being a “school of the future”, sort of a laboratory where they could apply their new ideas to their own kids. Boris and Lena believed that it was enough to create a suitable environment for a child - it was not necessary to do anything else, he or she would grow, mentally and physically, without any help. Parents should only guide, encourage and support, without any kind of pressure or excessive patronizing. 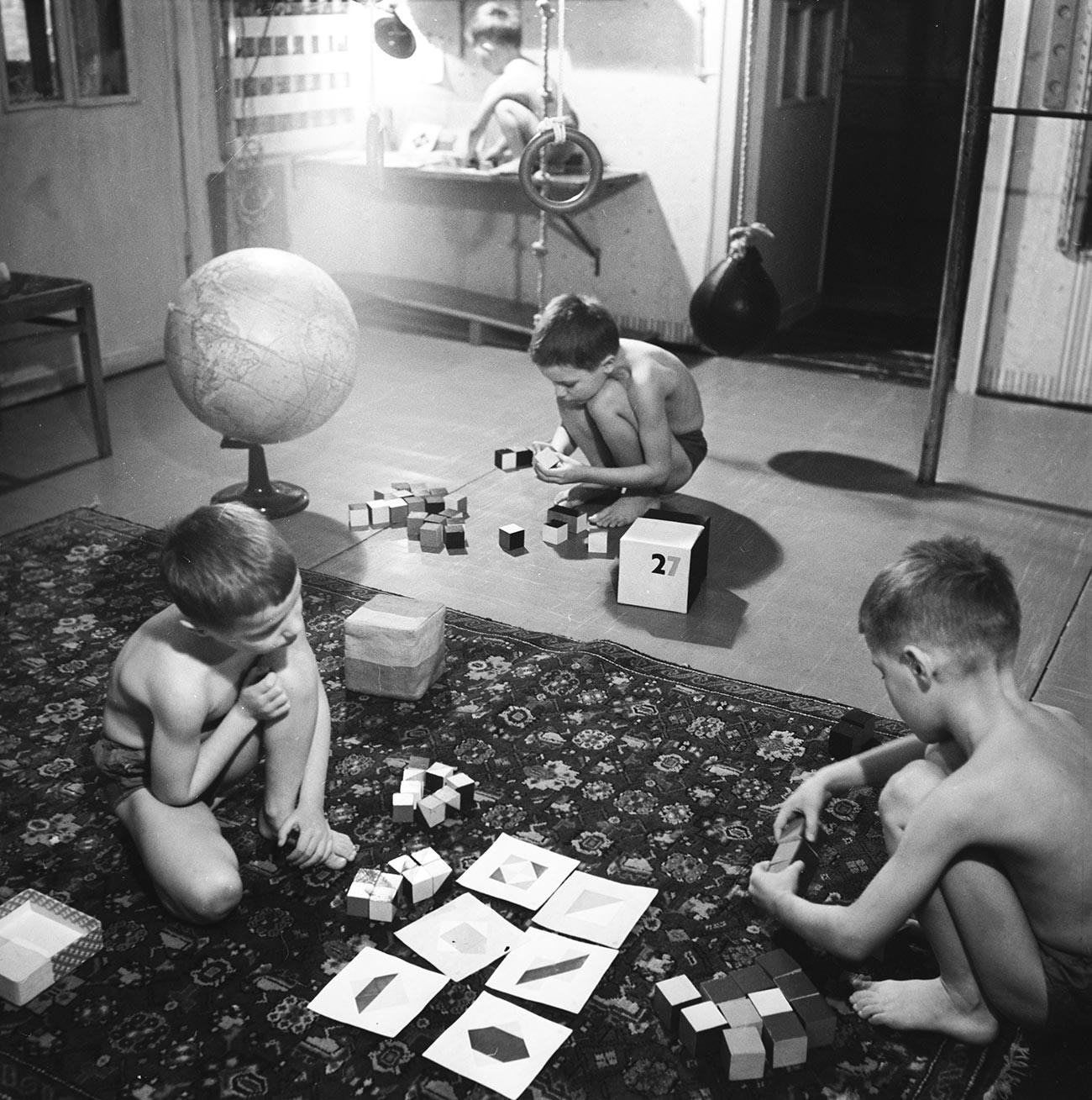 The Nikitin kids were free to choose what their day would look like. 1968

That’s why Boris and Lena allowed kids to touch and taste anything they found and never forbade them to do anything. Otherwise, how would they learn what was dangerous and what was safe? Plus, one couldn’t hide dangerous things from a kid forever. “What if we ‘introduce’ a kid to such dangers? This introduction will take place as we watch them and we will be able to control the seriousness of the consequences,” Lena wrote in one of her books. “It’s better to make a ‘safety vaccine’, cause a minor trouble to a kid, but, thus, teach him to be cautious, than keep him in the dark of the dangers that can happen to him unexpectedly.” 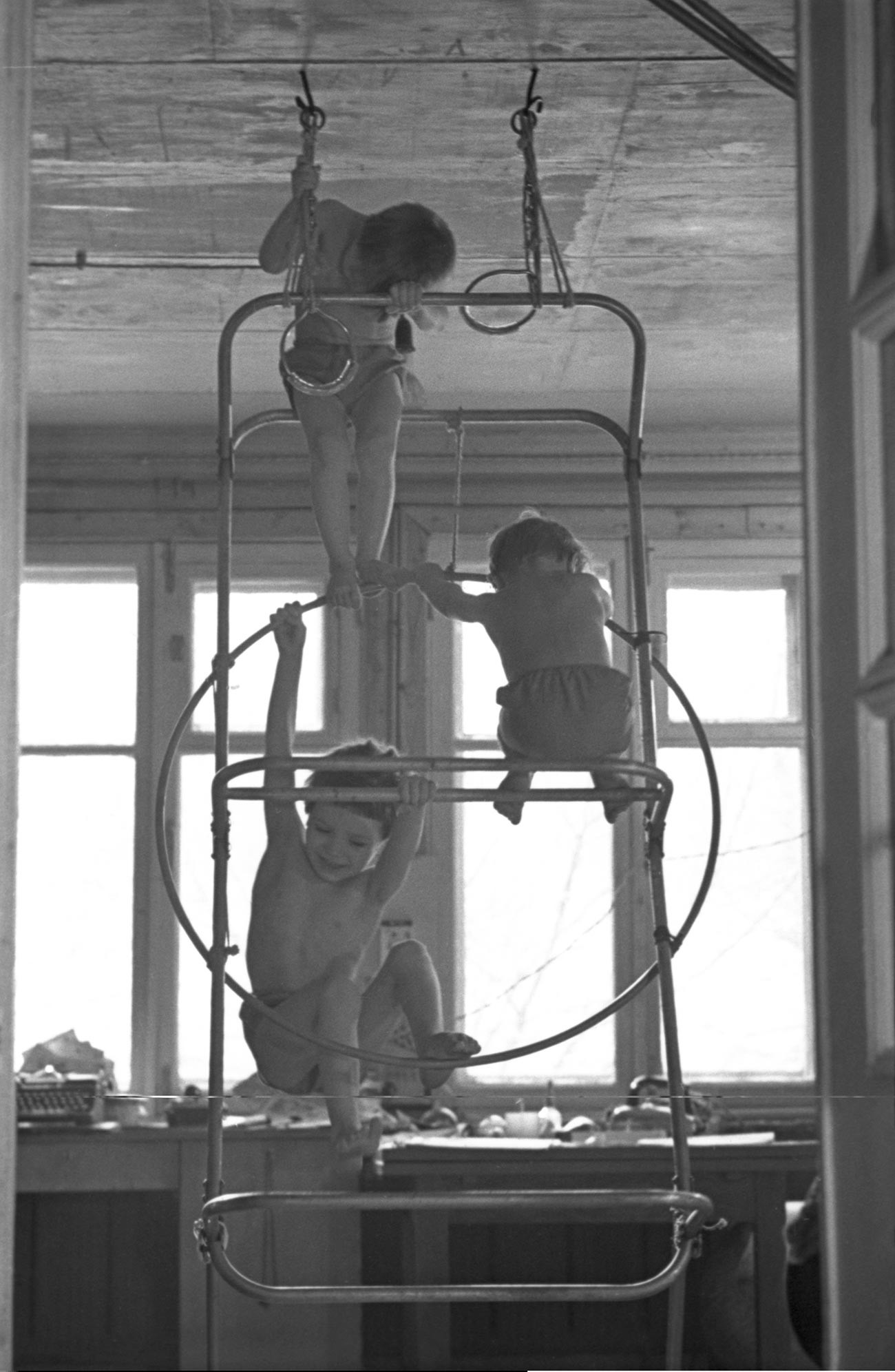 According to Lena, the freedom of movements not only facilitates the development of strength and agility but also caution. 1966

The same applied to letting kids play climbing wall bars and ladders. “Of course, kids can fall down, but we are not afraid of this. Freedom of movements not only facilitates the development of strength and agility but also caution. Our kids never had any serious injuries,” she said.

As for cold hardening practices, it all started when their oldest had skin problems which didn’t seem to go away through conventional methods. Once Boris and Lena realized that Alesha’s skin would get less irritable after him being in the cold they tried leaving him outside, at first for just 10-15 seconds. The positive effect of this practice, in any kind of weather, prompted the parents to continue the practice later and develop it into naps and cold showers outside, even in winter. Interestingly, no one ever got a cold or any kind of related health problems. 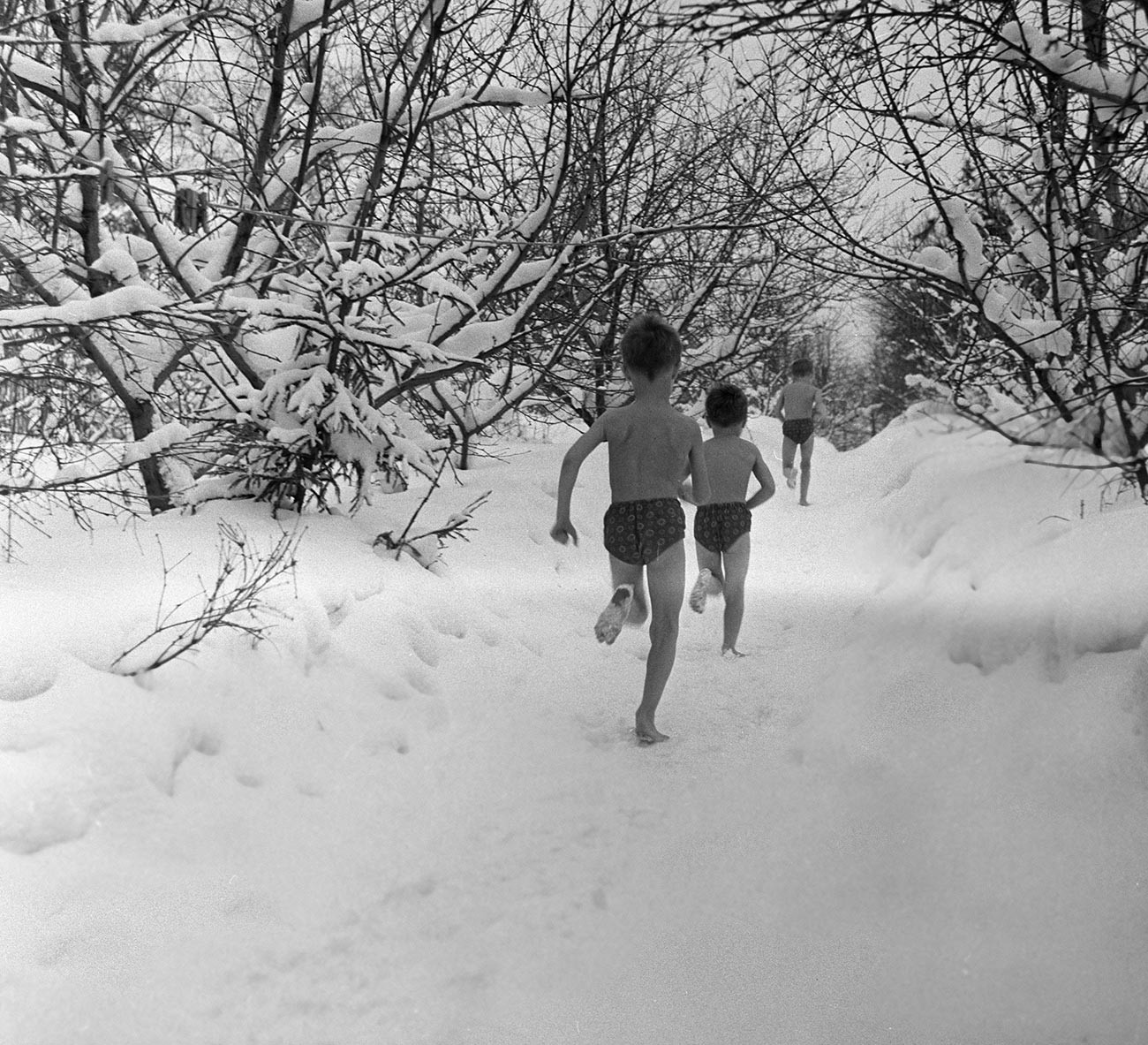 The cold hardening practices started when their oldest had skin problems. 1968

Here are some of the key principles they followed:

2. Emotional development: regular body contact with parents, sleeping with parents, an opportunity to explore the world without unnecessary limits, common hobbies shared with parents and their full support and approval of kids’ progress.

3. Total creative freedom: no obligatory lessons and practices. Kids do whatever they want to do at any given moment, easily moving from doing gymnastics to solving math problems.

4. Intellectual development: a rich educational environment with classroom boards where kids can study maths, books to read, geographic maps to explore, brain games and special games developed by Boris and Lena themselves. 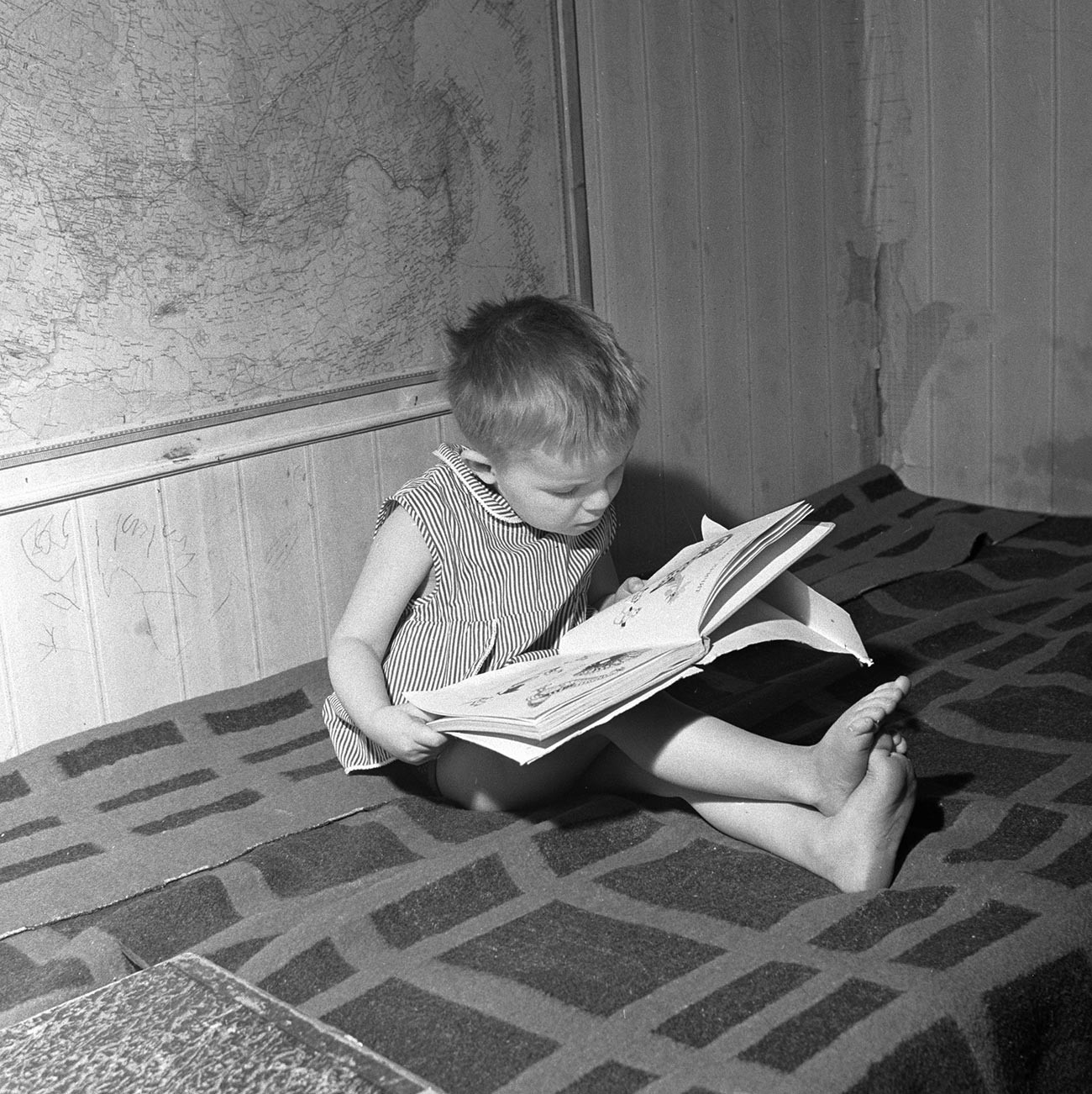 The children enjoyed a rich educational environment with classroom boards where kids could study maths and many books to read. 1968

It’s also important to note that the kids simply followed their parents habits. For example, Boris was an active person, fond of different sports and maintained excellent health until his death in 1999 at the age of 83 and deeply enjoyed being with children, playing games and observing their progress. Living in a country house outside of Moscow, the family lived quite humbly, both in food and clothing habits.

Thanks to this approach, the Nikitin children began reading at two to four years old and were more than ready to start school at five years old, two years earlier than usual. Their “over preparedness” to the school curriculum led to them skipping years, from first to third or from second to fourth, and they would even be allowed to skip lessons if they didn’t feel like going.

Such a fast-track intellectual development made it harder for some of the seven kids to socialize. And that’s why none of the Nikitin kids, as they grew older, sent their children to school earlier, even though they also followed the same early childhood development lifestyle.

Furthemore, it turned out to be more difficult for them to adapt to real life, because they were used to learning everything in their life with ease and thus had an illusion that it would continue this way. For instance, their daughter Yulia remembered that she had to train herself to “do something even though she didn’t want to” at an older age, while the oldest, Alesha, learned to achieve his goals through doing martial arts.

Another problem was living under close public attention. As the children recall, it was hard to live their life being constantly watched by both fans of the family and those who criticized them. Plus, the public attention effectively took Boris and Lena away from their kids: they would travel a lot giving lectures, spending a lot of time writing books and articles, so the kids felt left alone.

Despite the public expectations to see the kids grow up to be some kind of geniuses or celebrities, none of them did. The majority of them graduated school after eighth grade (though there were ten), received higher education and had large families of their own. Four families now live in two big houses in Bolshevo and frequently get visited by other family members living in other cities. On their official website, they share how their childhood affected their lives and admit that they still use many of the things taught by their parents. 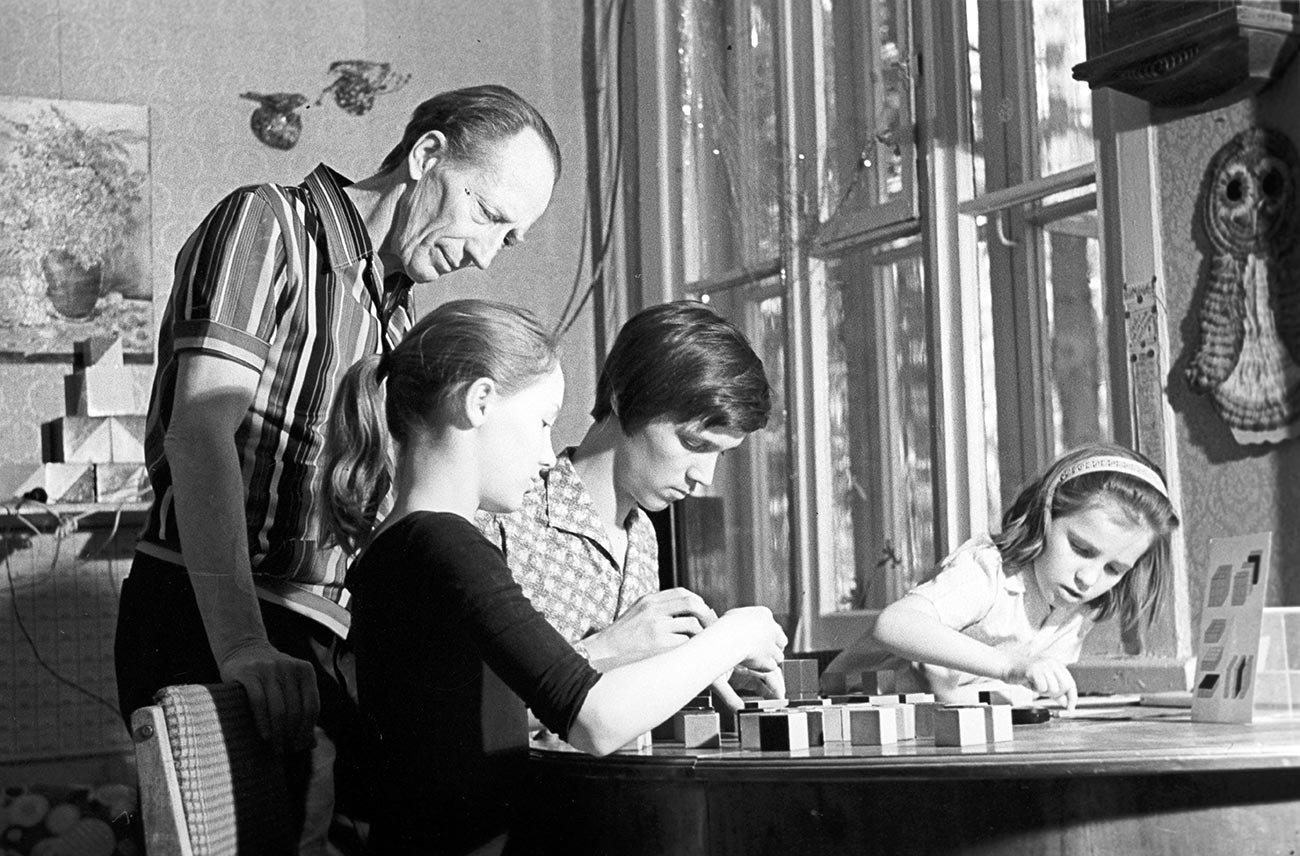 Boris deeply enjoyed being with children, playing games and observing their progress. 1978

The eldest, Alexey, got a degree in physics and astronomy and now works as an engineer-consultant in London. Anton is a chemist working as deputy head of a production department. Olga is a lawyer with more than 25 years of experience. Anna is a medic, Yulia - a journalist, Ivan - a video operator, and Lyubov - a former librarian and proud mom of 10 (!). All of them admit they all maintained excellent health through life and kept their love of reading instilled by their parents.

Quoted by the KP news outlet, Lena herself recalled: “We didn’t aim to raise famous people, erudites. All my kids are normal, healthy people. There are too many celebrities in the world right now anyway. And not so many decent people. I’m happy with my children: none of them will ever do harm and will not enter paradise at someone else’s expense.”