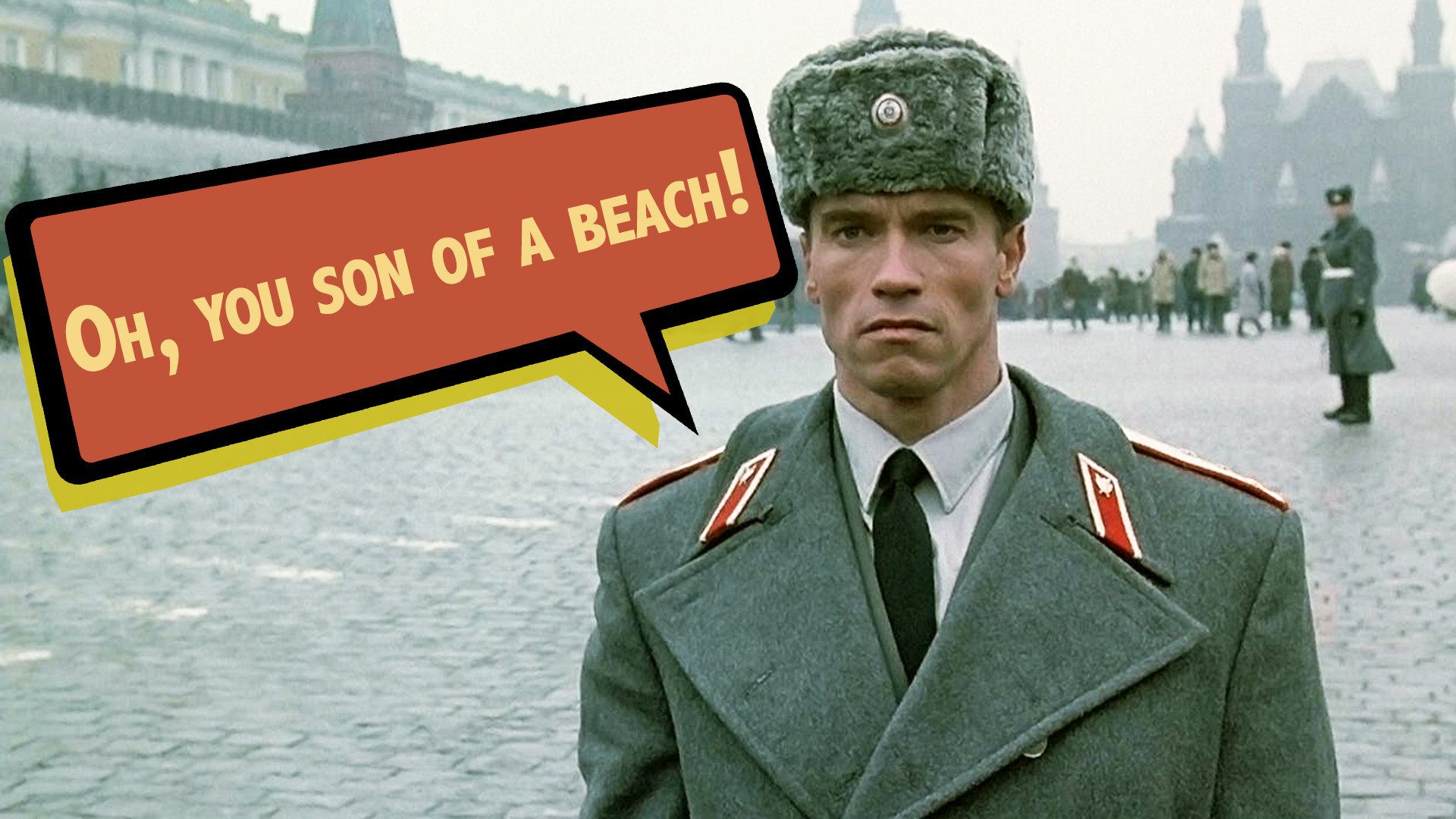 Walter Hill/Carolco Pictures, 1988; Russia Beyond
You might think that the Russian language is a difficult one, however, for Russians English is also not that easy. Especially, when it comes to phonetics.

Russians can not pronounce ‘A’ properly. The open and long sound æ just doesn’t exist in Russian. Instead they perform something like ‘E’. You never know if they meant ‘bad’ or ‘bed’. And anything like “black cat sat on a mat” turns into “bleck ket set on e met”!

While Russians frequently turn the inner ‘A’ into ‘E’, they also mispronounce ‘A’ at the beginning. Sound ɑː in ‘after’ they turn into clear ‘uh’ or ‘ah’ - because that’s how A always sounds in Russian.

There is another problem with ‘after’ and words like it - Russians pronounce clearly ‘er’ in the end instead of ‘ə’.

Russians don’t normally differentiate long and short vowel sounds. That’s why you won’t be 100% sure if they’re speaking about their summer ‘beach’ holidays, or complaining about some ‘b*tch’. ‘Sheep’ and ‘ship’ spoken by a Russian would sound equal, too.

At the same time, ‘E’ sounds like ‘YE’, as if you smile a lot. ‘Teacher’ - one of the first words that anyone learns in a foreign language, sounds like ‘ticheR’ with a Russian accent, not ‘teechə’, as it is supposed to be pronounced.

Or those vowel combinations! You’ve probably already got that it’s Russians’ main weak spot.  Instead of an open ɔː sound in such words as ‘prawn’ or ‘spawn’ Russians pronounce a clear ‘ao’ or even ‘au’: [spaun] and [praon].

‘Very’ and anything with ‘V’

‘Water’, ‘Walter Scott’, ‘William Speakspeare’ and ‘Walt Disney’ suffer a lot from Russian accents. As there is no such letter as ‘W’ in Cyrillic, Russians just don’t know how to pronounce it properly and frequently forget to switch. ‘Voter’, ‘Valter’, ‘Villyam’, ‘Volt’ - that’s how they are most commonly said. Well, here is another problem - all English names which start with ‘W’ or ‘V’ are transliterated into Russian using the single ‘V’ (‘В’) in the beginning. So forgive them. But ‘water’? It’s ‘voda’ in Russian…

While they pronounce ‘V’ instead of ‘W’, sometimes Russians do the opposite when they need to pronounce ‘V’ in English - they turn it into ‘W’. ‘Very’ and ‘even’ could really sound like ‘wery’ and ‘ewen’. They just want to soften their ‘V’ and frequently over try.

‘H’ in general is hard for Russians. They pronounce it harder than native speakers, with something similar to ‘kh’, not open soft h. So it creates an odd throaty sound and instead of ‘help me’ you’d hear ‘khyelp mee’, while Russians pronounce ‘happy’ like ‘khepi’.

And by the way… Did you know that Harry Potter turns into Garri Potter in the Russian language?

8. Just about everything with ‘R’

Yes, mispronouncing ‘R’ is a big thing for Rrrrrussians! While foreigners can’t pronounce Russian ‘R’, Russians just can’t break their tongue to reproduce the English ‘R’, because of their hard accents. A phrase like “over there” can make a Russian sweat. They will pronounce it like “oweR zeRrRr”. How come did ‘Z’ end up there, You may ask. That’s our next point.

‘Bezdei’, ‘Khiezer’, ‘zei’. Did you recognize the words? It’s ‘birthday’, ‘Heather’, and ‘they’. Russians don’t have sounds that should be pronounced with the tongue between the teeth, so they just turn them into something vaguely similar. And for Russians it’s the letter ‘З’ (the Russian letter ‘z’, not the number ‘three’) which is ‘Z’ in English.

At the same time, ‘TH’ as in ‘think’ or ‘throw’ Russians pronounce like ‘S’, so for them the pronunciation of ‘think’ and ‘sink’ might have no difference. Or they try to avoid these complicated sounds altogether. For example, the name ‘Katharine’ would be transliterated into Russian as ‘Ketrin’, and pronounced this way. ‘Katharine Hepburn’ this way will sound like ‘KyetRRRin KhyepbYOrn’. Enjoy!

Stresses are usually a common mistake for foreigners who speak Russian, as well. Russians struggle to put them on a correct syllable, too. This way ‘engiNEER’ turns into ‘ENgineer’, while ‘commAnd’ into ‘cOmmand’, and ‘cIrcumstance’ into ‘circumstAnce’ (one of the most challenging English words for Russians, by the way).

READ MORE: 10 steps to get a kick-ass Russian accent