Russian puzzle: How do you “put” something when it can only "stand" or "lie"? 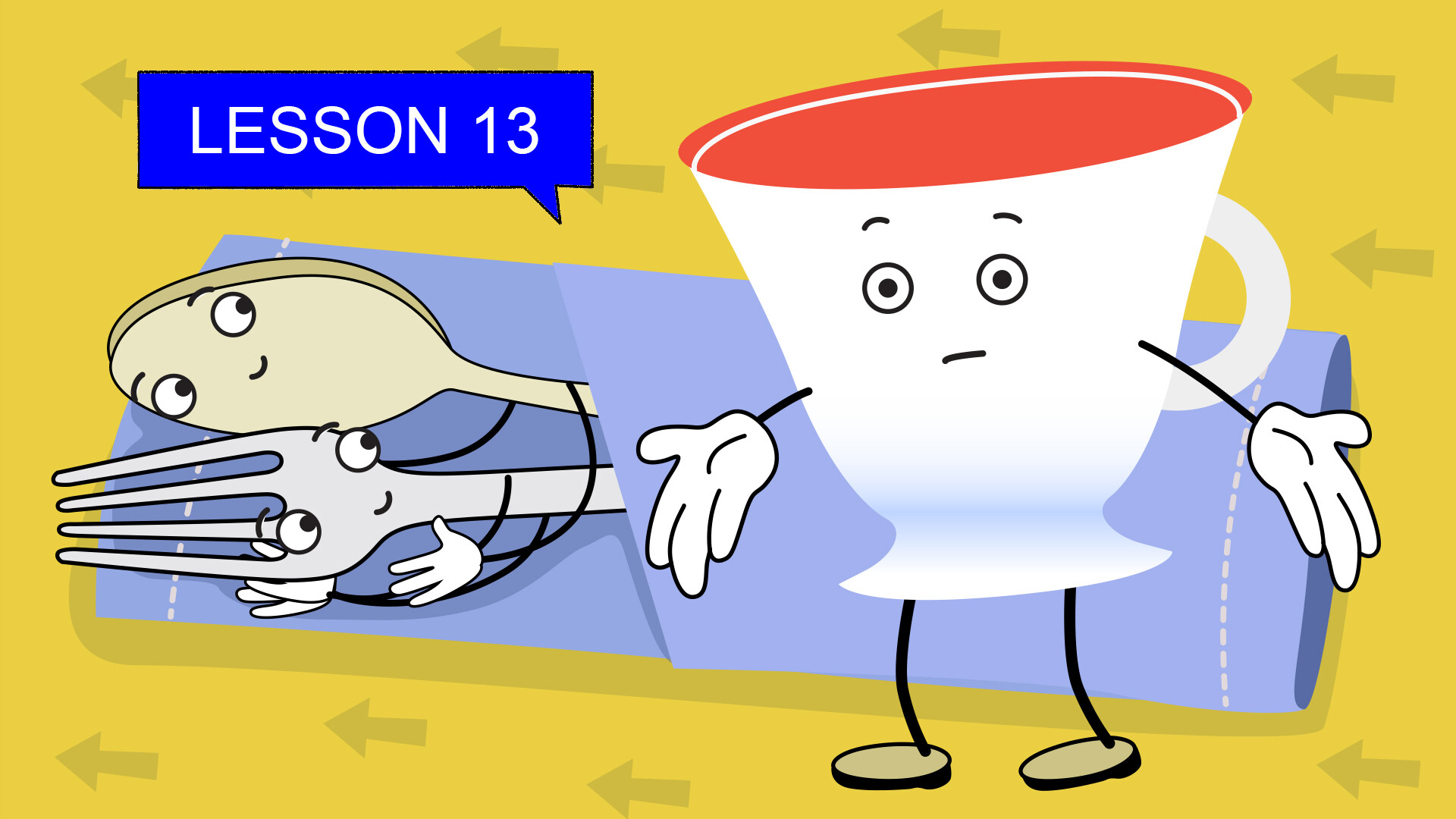 Alena Repkina
We often encounter entire sets of rules in foreign languages, not present in our own. And, however smart we may be, the outright absence of a particular rule might slow down our learning process. We discuss one such case here.
Imagine that your Russian friends invited you for dinner. You’re on time, you take your shoes off in the hall and have worked up a healthy appetite. The food is ready, but the table hasn’t been set. And, as you’re enjoying conversation, you begin to help the hosts arrange the plates, glasses and cutlery.

Were the conversation to be in English, you’d be using the verb to put in relation to all those objects. However, if you speak a little Russian, you begin to notice that your friends split the usage of the verb for all these things between ПОСТАВИТЬ (to stand upright) and ПОЛОЖИТЬ (to lay down). This is all down to the fact that there’s no verb for TO PUT in Russian without first specifying what position the item is to be placed on a surface.

A clever foreigner will quickly pick up on this idiosyncrasy, observing your Russian friends use the verb for putting something upright (ПОСТАВИТЬ) for items like plates, bottles, pitchers or glasses and the form for putting something in a horizontal position (ПОЛОЖИТЬ) for objects, such as cutlery and napkins (we’ll get to why plates “stand” below).

“Is that all?” you may ask. Well, not quite. Things aren’t as simple as that. But let’s not rush things. Have you set the table? OK, then let’s start the dinner party. 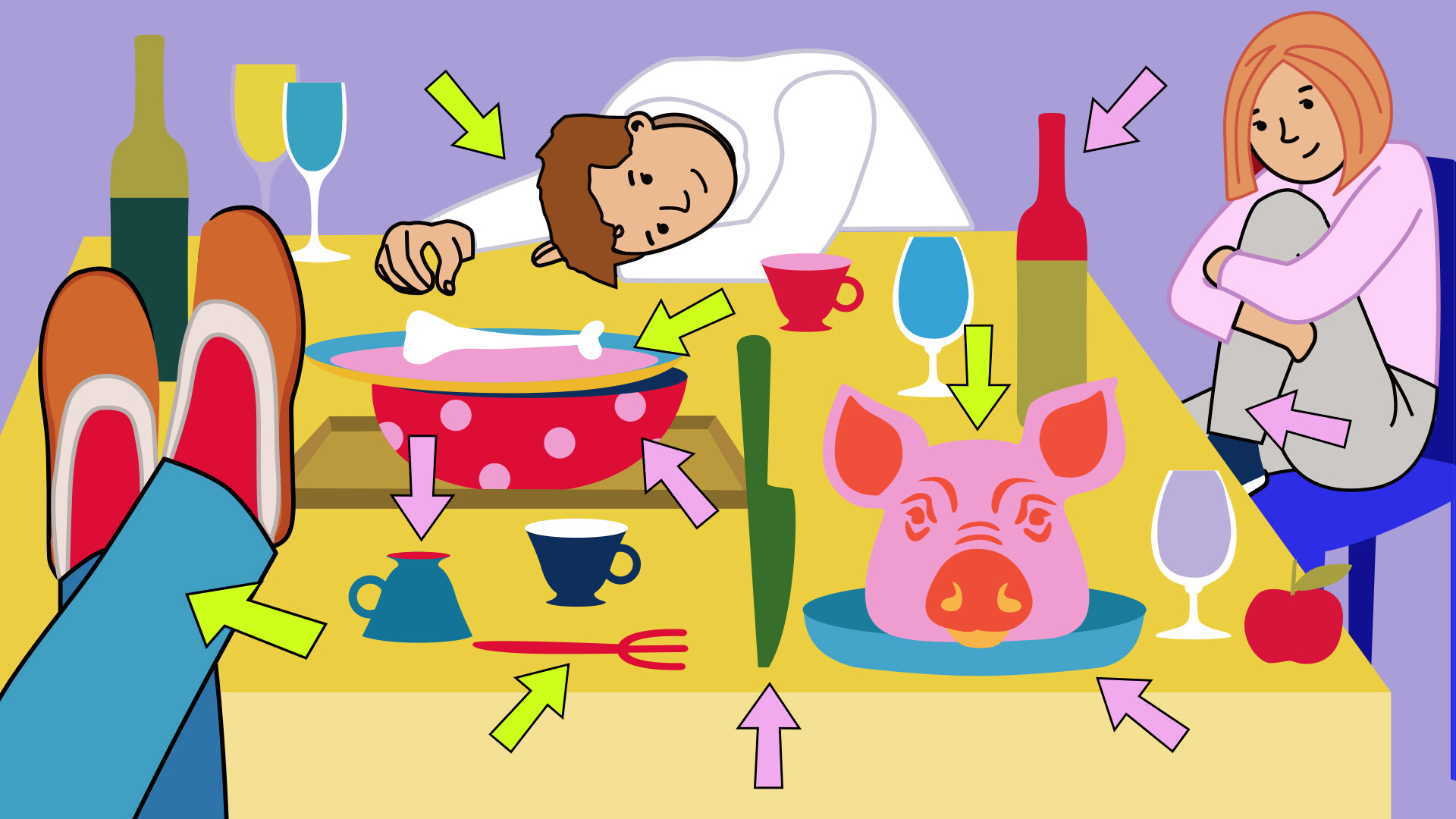 The picture shows that the party is a success! And if you’re still in a state to solve linguistic riddles, you’ll notice that your Russian friends - having performed a fortune-telling session using a coffee cup - now refer to the item as lying down and not standing up (ЛЕЖИТ, instead of СТОИТ). The plate, meanwhile, remains in a horizontal position, but, for some reason, also “lies”, together with the remaining food. The salad bowl remains “standing” (СТОИТ), however - against all logic - the tray on which it stands… also “stands”. What’s more, wasn’t it “lying down” when there was nothing on it? Or are we imagining things now?

Meanwhile, you still ПОЛОЖИЛИ - “laid” - your feet on the table, if you choose to put them up. Nothing unusual here, linguistically, but do please remove those feet from the table. Your friend, meanwhile, has pressed her knee to her chest, putting one foot up on the chair - and now that leg СТОИТ - “stands” - on the chair. The woman herself is sitting down, but the leg still “stands”? What?!

We now move to the knife. It has been inserted into the table vertically since your friends decided to explain to you that it “lies” 99 percent of the time. And now physically stands. But they haven’t managed to find the exception to the rule. Even when thrust vertically into the table - it still doesn’t “stand”. When we forcefully insert something into a surface, we use some other specialized verb. ВОТКНУТЬ, for example (to stick). 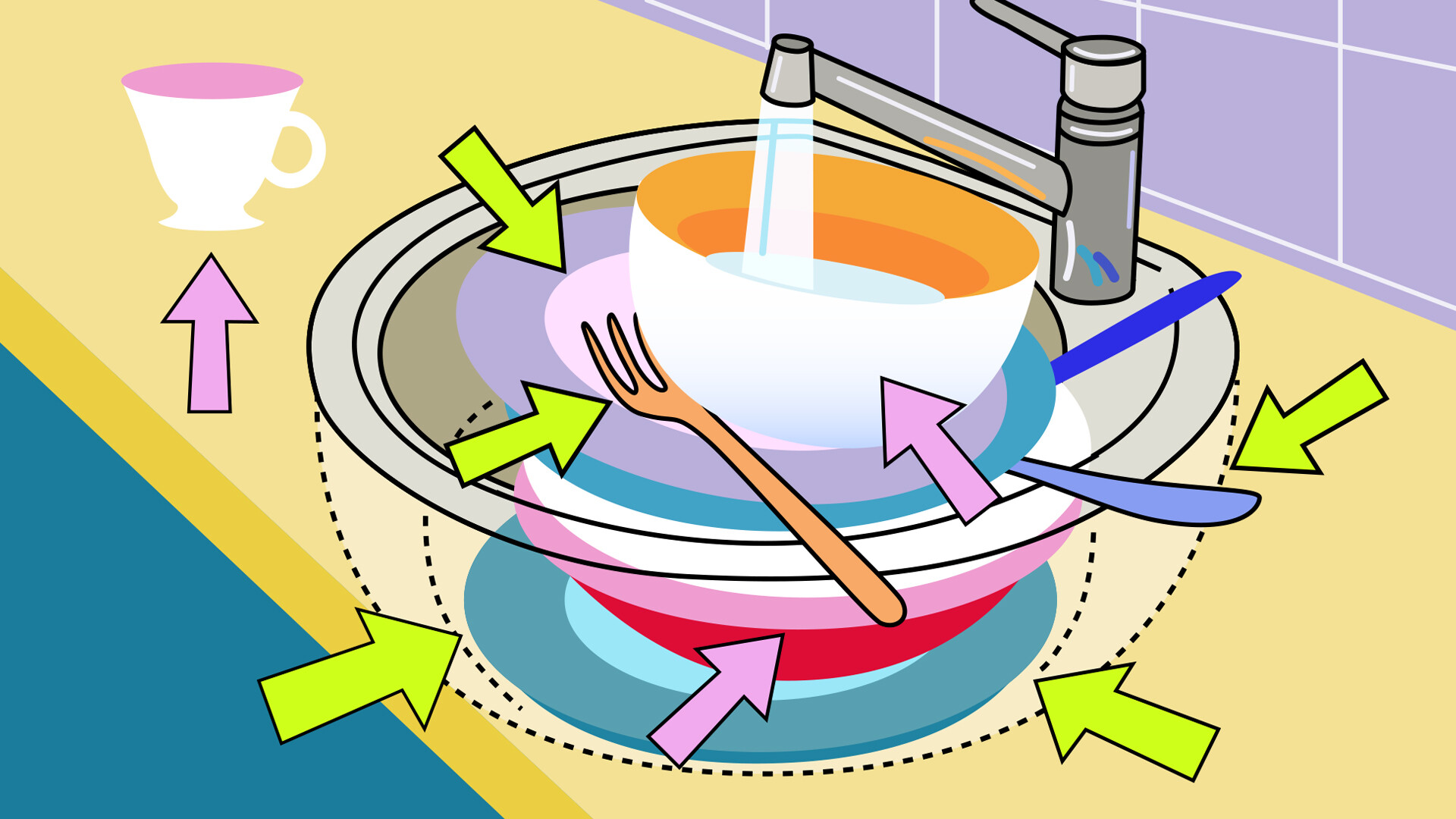 What about the sink? The dishes in the sink ЛЕЖИТ (lie horizontally). And when we start washing and stand the plates in the rack, they, well, “stand” (СТОИТ), your friends might explain to you.

We have to come to terms with the fact that there are no hard rules in Russian for some of the aspects we’ve discussed above - and some Russians might even disagree among themselves as to which word to use: take the case of the tray on the table, the dishes at the bottom of the wash basin or when they’re in the rack (did you lay or stand them there?). Some guidelines might be - as we mentioned - the vertical or horizontal position of the object. But we’d best rely on logical hints here, since what is “vertical” or “horizontal” really?

It’s best to look not at the shape, but the function of things. If it’s a receptacle, it must “stand” in order not to topple over and lose its contents. Once a bottle has been knocked over, it will “lie” (just like our upside down coffee cup from the example above).

And still, how come a plate at the bottom of the wash basin “stands”, while others “lie”? Well, that’s because - as soon as we’ve used the word “bottom”, the wash basin stopped being a receptacle and turned into a surface, where ПОСТАВИТЬ - and not ПОЛОЖИТЬ - applies.

Now that you (think) you know everything, here’s the million-dollar question: your friends decide it’s time for song and dance. So, how come, when someone pulls out a perfectly flat vinyl record, they “stand” - and not “lay” - it on the player’s flat surface? Wow, isn’t it nice that we have all our music in the cloud these days?