7 facts about Lomonosov Moscow State University you should know 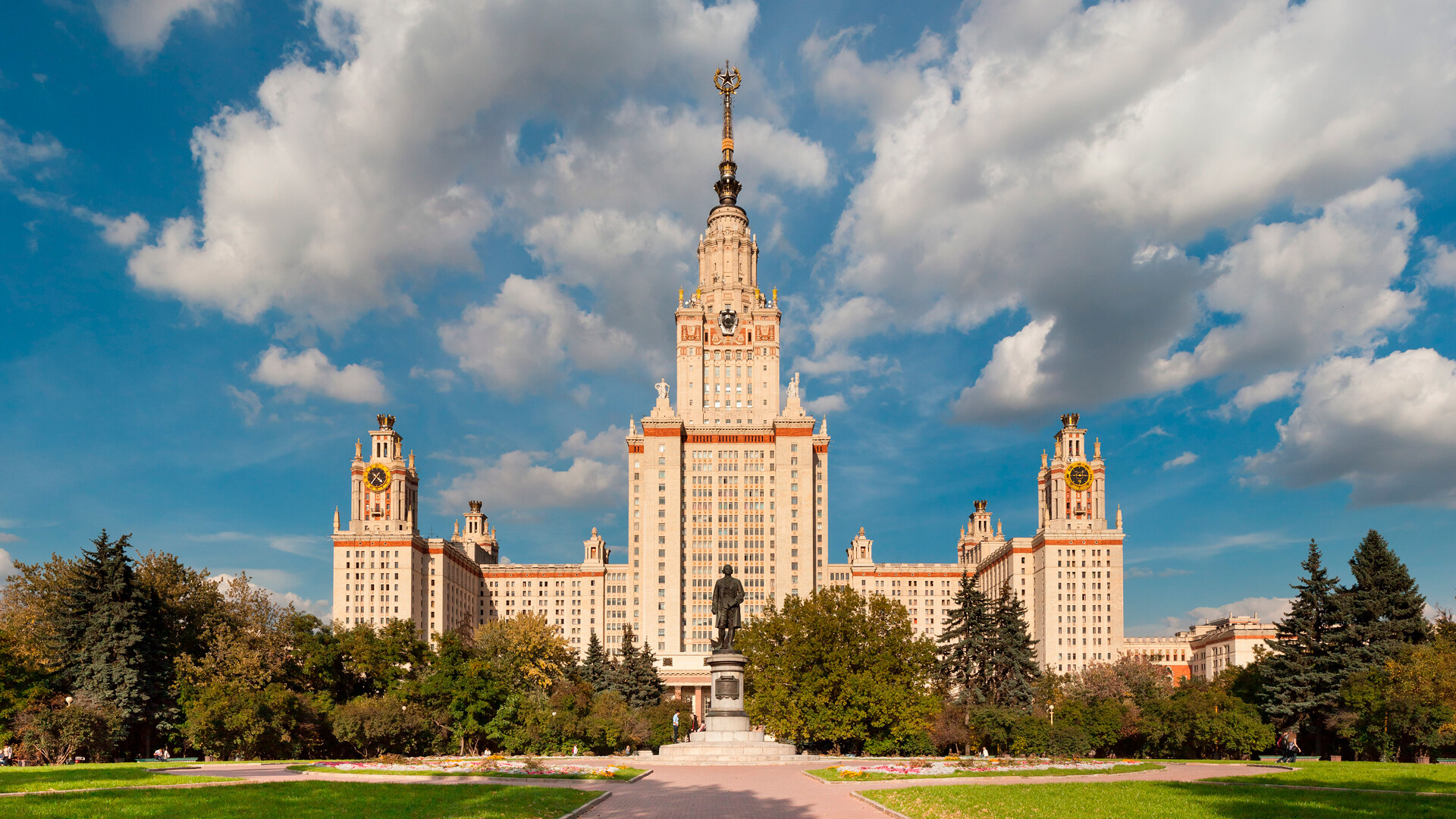 Dmitry A. Mottl (CC BY-SA 3.0)
Russia, overall, has more than a thousand universities. But every schoolkid dreams of enrolling at MSU.

1. The oldest university in Russia 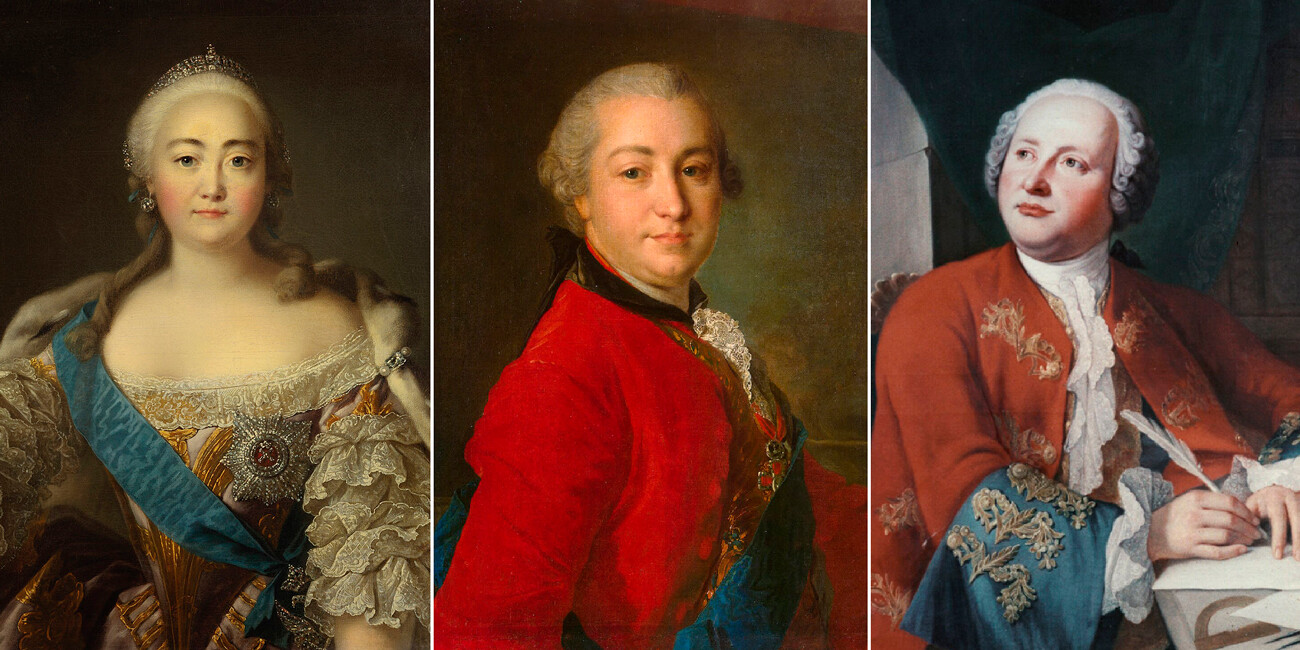 Moscow University was founded in 1755 at the order of Empress Elizaveta Petrovna. The education concept and the university project were prepared by first Russian academician Mikhail Lomonosov. However, MSU would be named after him only in 1940. 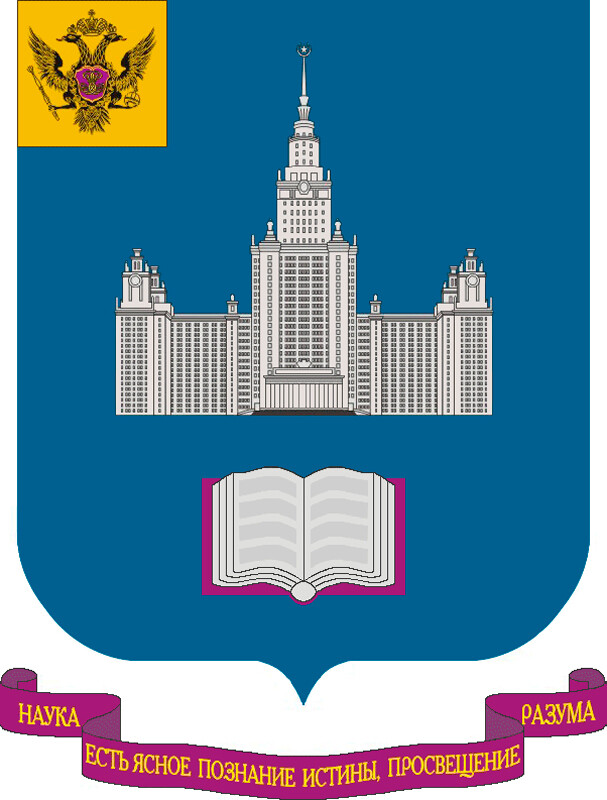 Lomonosov student and Elizaveta’s favorite Ivan Shuvalov, who presented the project to the empress, promoted the idea of creating a university. He became the first curator of MSU.

January 25 is considered the birthday of the university, also known as ‘Tatiana Day’. Shuvalov timed it for the birthday of his mother. MSU also has a house church named after Martyr Tatiana.

Moscow University contests St. Petersburg State University’s claim to be the oldest (historians debate if the latter is the successor of the Academy of Sciences, founded by Peter the Great in 1724 or the reorganized Pedagogical University, founded in 1819).

And yet, MSU’s anthem says: “It’s ours! It’s the first! It’s Moscow University!”

2. Until 1953, the main building was located near the Kremlin 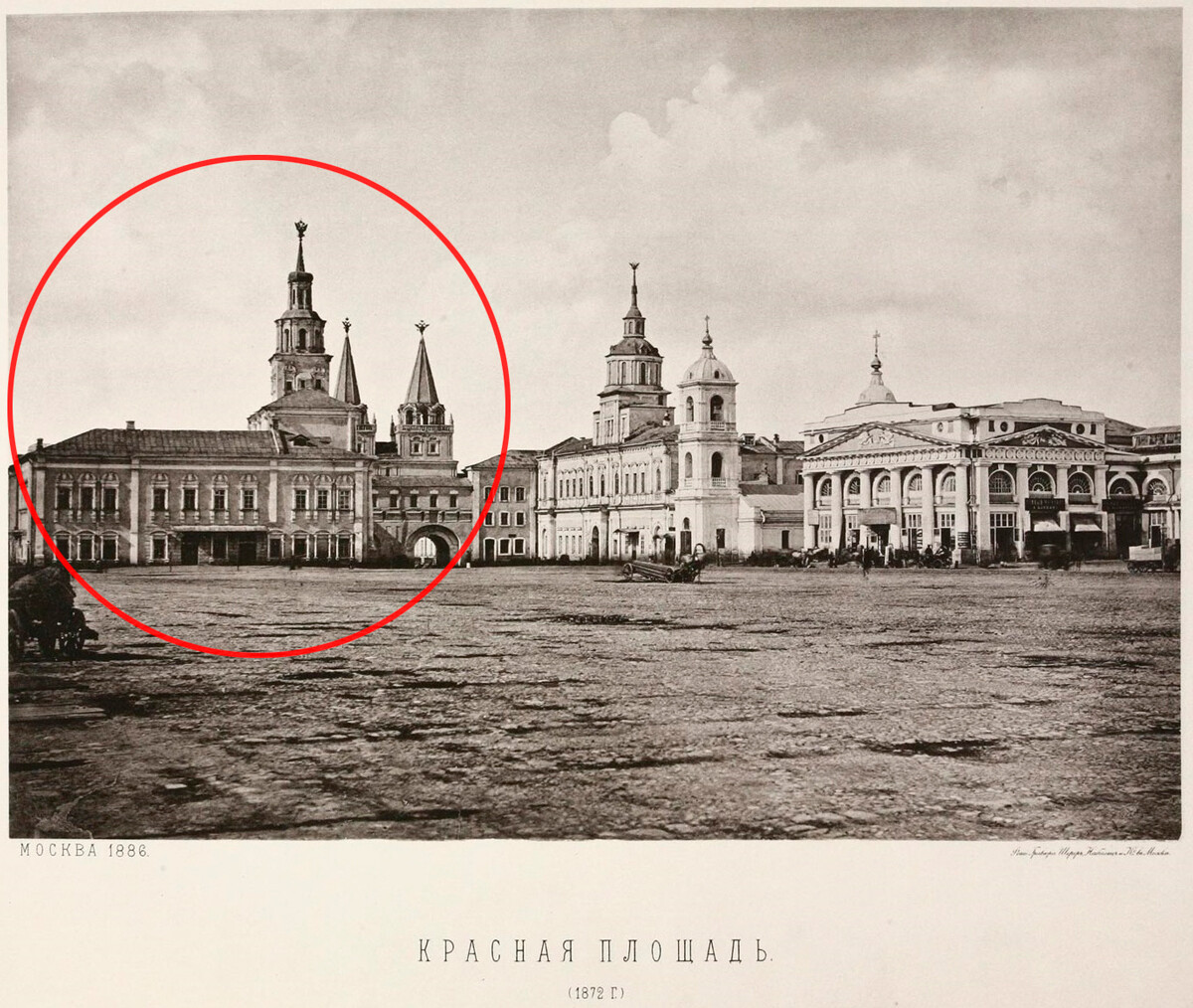 The building of 'Zemsky prikaz' on the Red Square, 1872

The first building of MSU didn’t survive – initially, the university was given the building of Zemsky prikaz (county council) on the Red Square (today, the Historical Museum occupies this space). This building didn’t meet the requirements of the new university – and, in the 1780s, a new building was erected for it on Mokhovaya Street, right across from the Kremlin. 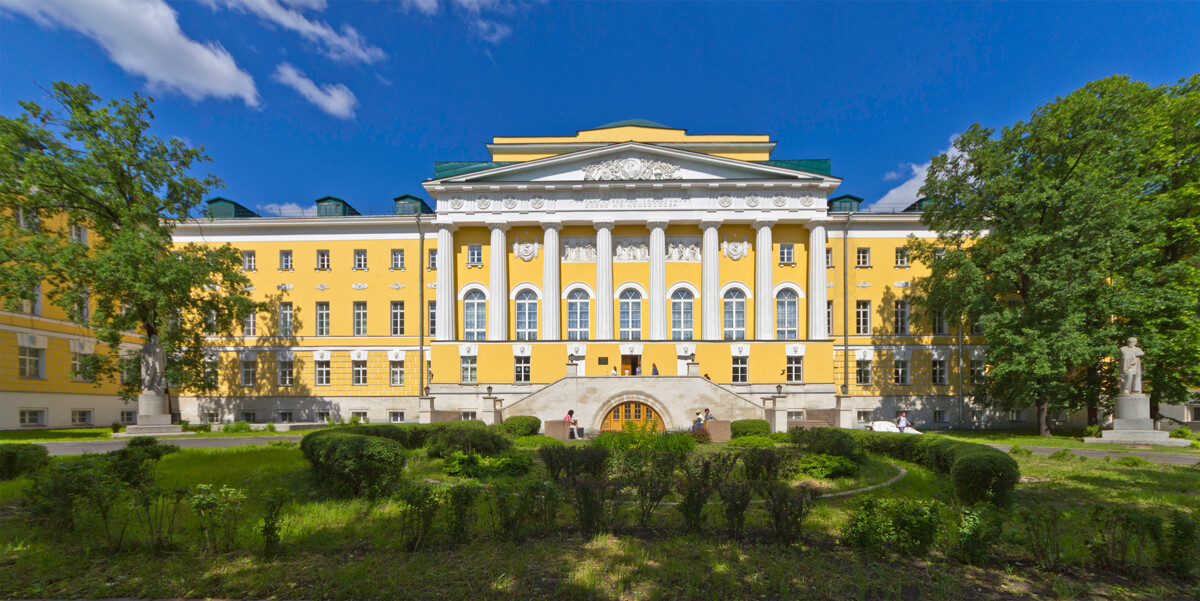 Students still attend this oldest of the surviving buildings of the university at the address Mokhovaya Street, 11 – now it hosts MSU’s Institute of Asian and African Studies. 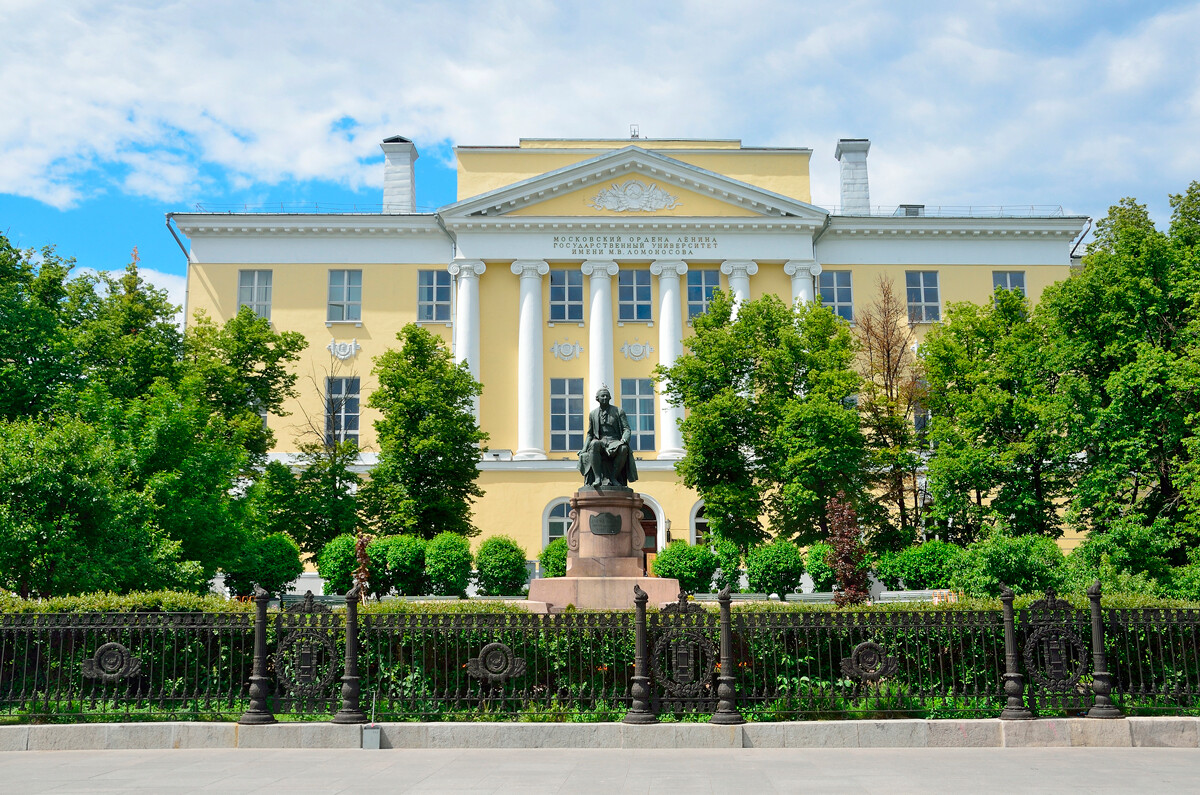 In the 1830s, for the university’s needs another building was bought out (built in 1790) across the road (now the address Mokhovaya, 9 is occupied by the MSU Faculty of Journalism), as well as the house church. Later, the university occupied the entire quarter – its own printing house appeared, as well as a scientific library and a zoological museum.

3. The main building is now one of Stalin’s skyscrapers 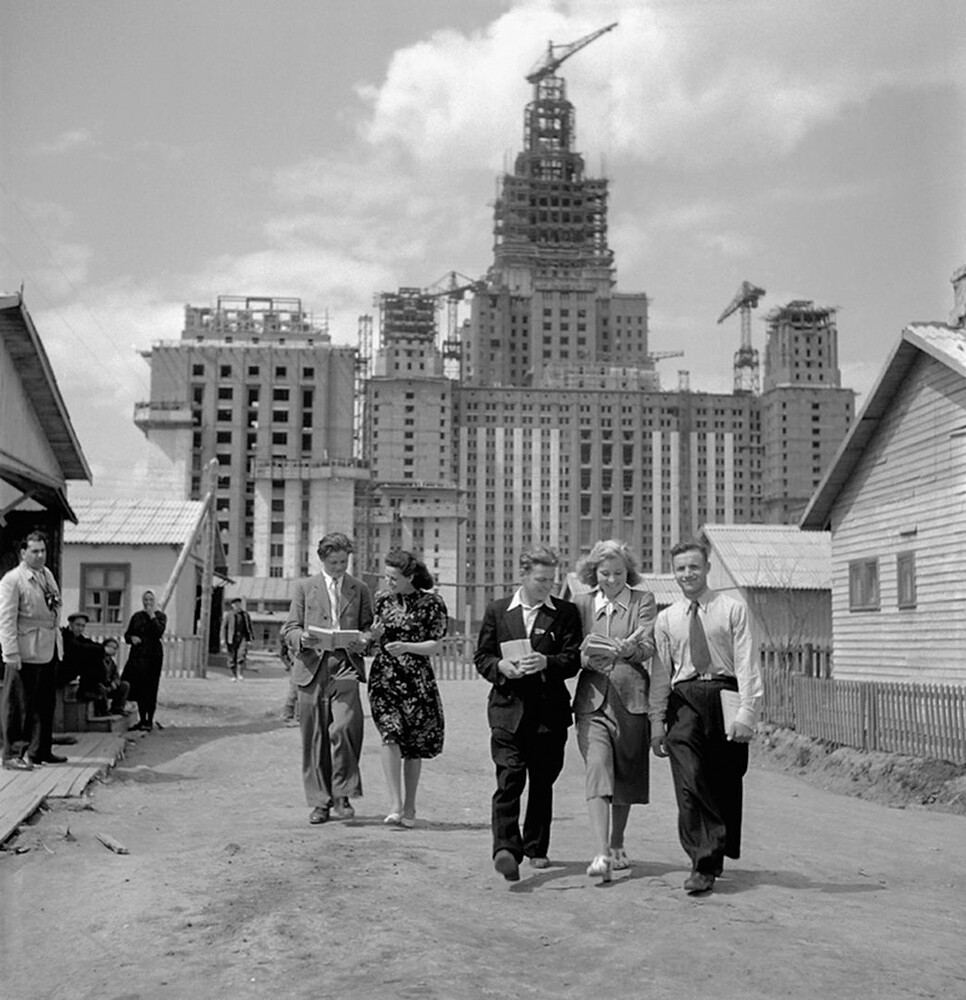 Before the 1917 Revolution, education at Moscow State University was just for the elites – and, even then, only a very small circle of people could afford it. But, after the Revolution, the course was set for the democratization of education. The number of students rose sharply, a reorganization was undertaken and student self-governed bodies were created. The Higher Courses for Women also merged with MSU, for the first time allowing female students and also female professors. New faculties and areas of study appeared; small buildings in the center of the city couldn’t keep up with the main university of the country’s needs. 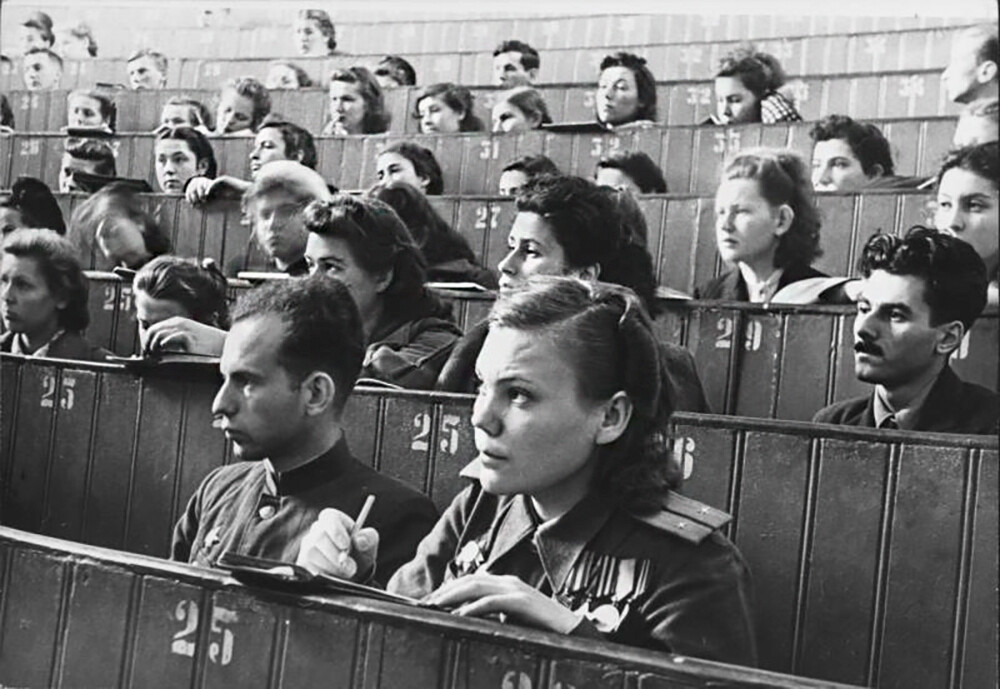 First lecture after the end of WWII. September 1, 1945

At the end of the 1940s, Stalin planned to build several high-rises in Moscow – initially, the high-rise on Lenin (‘Sparrow’) Hills on the bend of the Moscow River was supposed to be a hotel. But, the MSU administration pleaded so much for a new building that Stalin decided to give this building to the university. MSU ended up being the tallest of these buildings – its central building with the spire has 32 stories and is 239 meters tall (and it's the tallest educational building in the world). 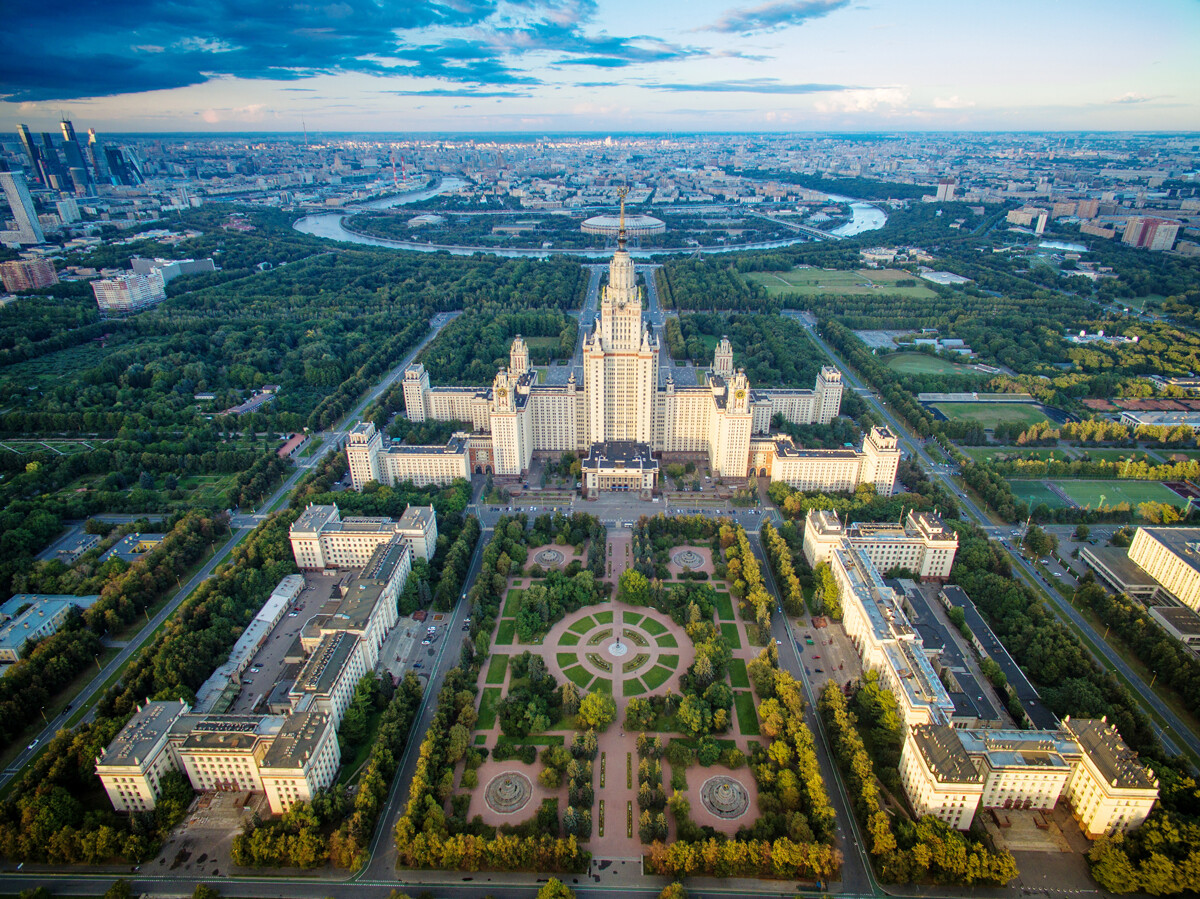 At the same time, two buildings for the Faculties of Chemistry and Physics were erected next to the main one in the same style.

4. MSU owns hundreds of other buildings 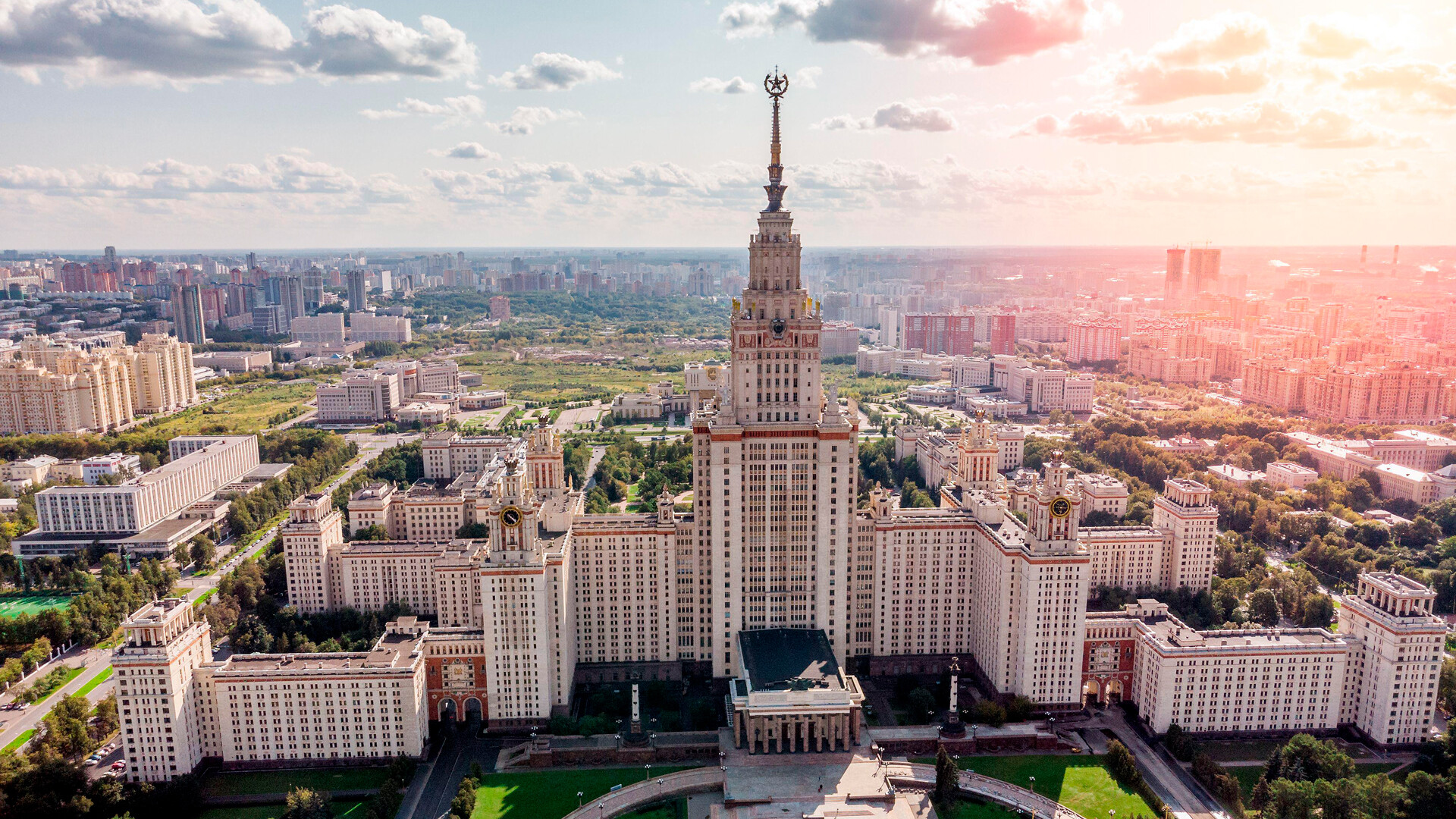 View on MSU main building from the Vorobyevy Gory

Today, MSU owns hundreds of buildings across Moscow and beyond. The area of just the main campus is hundreds of hectares. 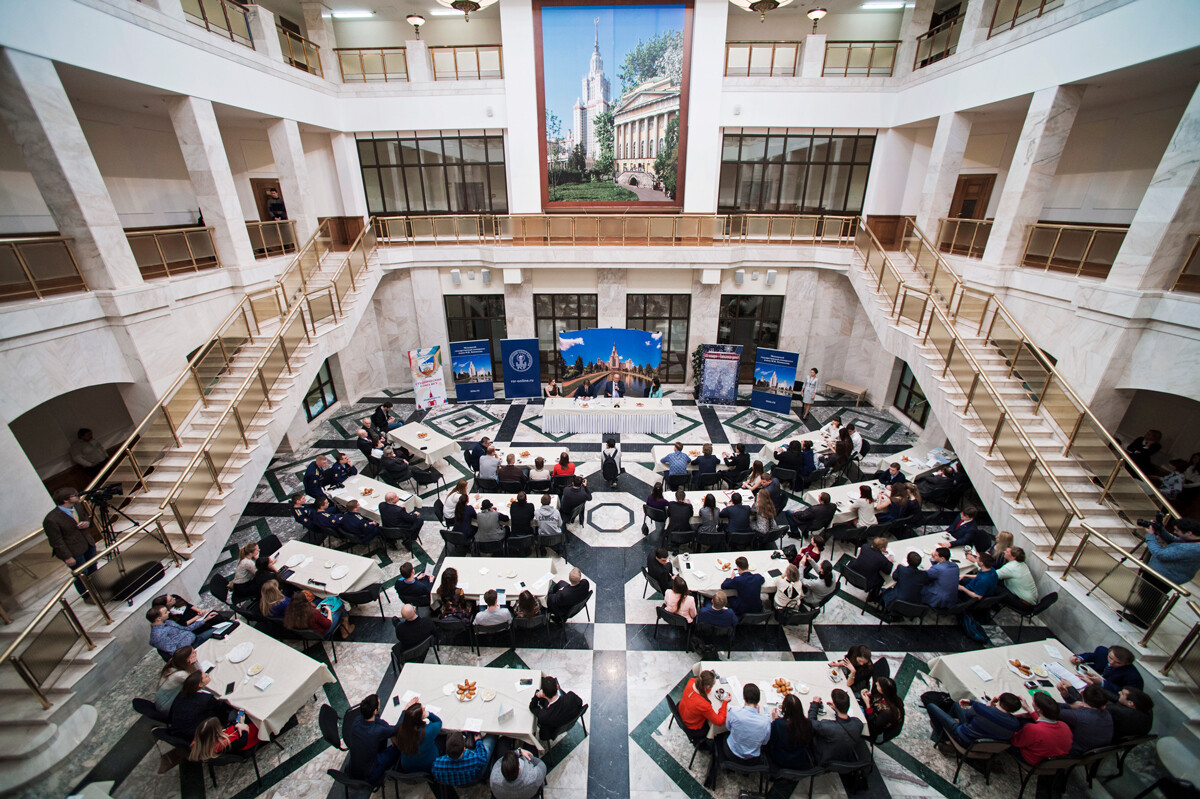 The building of the new MSU Fundamental Library (opened in 2005)

Aside from a range of buildings in the middle of the city and more than ten educational buildings on Sparrow Hills, MSU owns several libraries, research centers and laboratories, its own printing house, a botanical garden, several museums, a track and field arena, as well as soccer fields and tennis courts and much, much more. 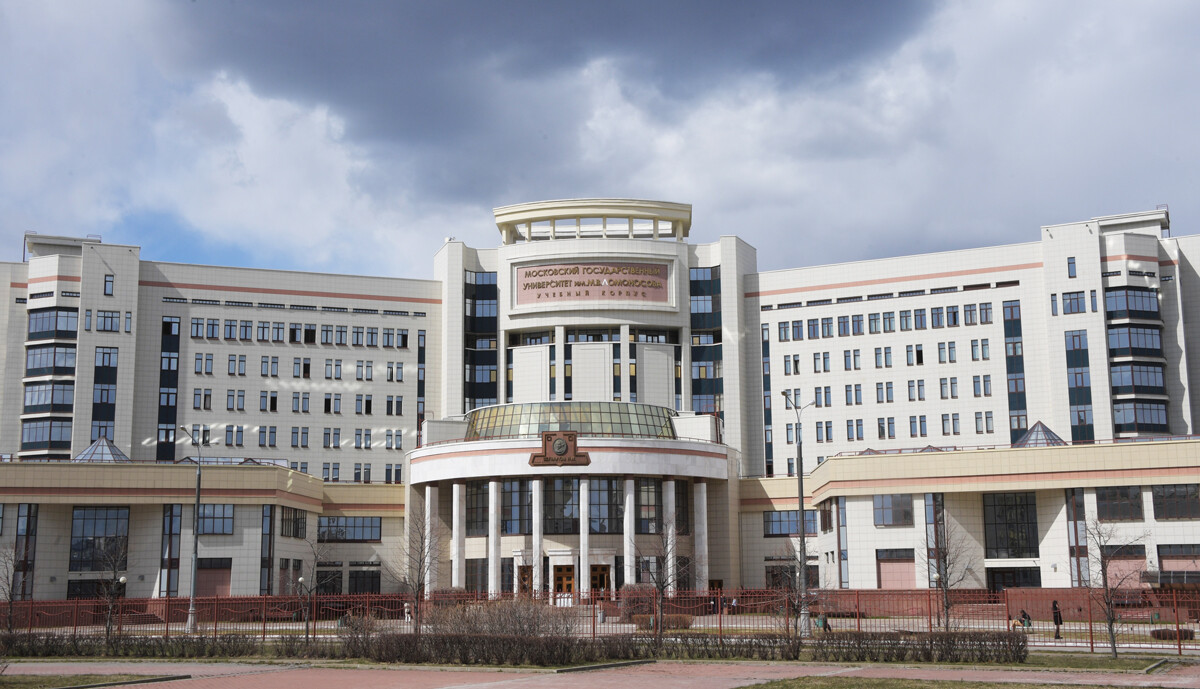 The Shuvalov academic buildings of MSU (opened in 2007)

It even has its own clinic, meteorological observatory and its own nuclear center.

5. The university currently has 43 faculties!

In addition to the faculties, MSU also has more than 300 departments and seven branches in other countries (among them former USSR republics and Slovenia). 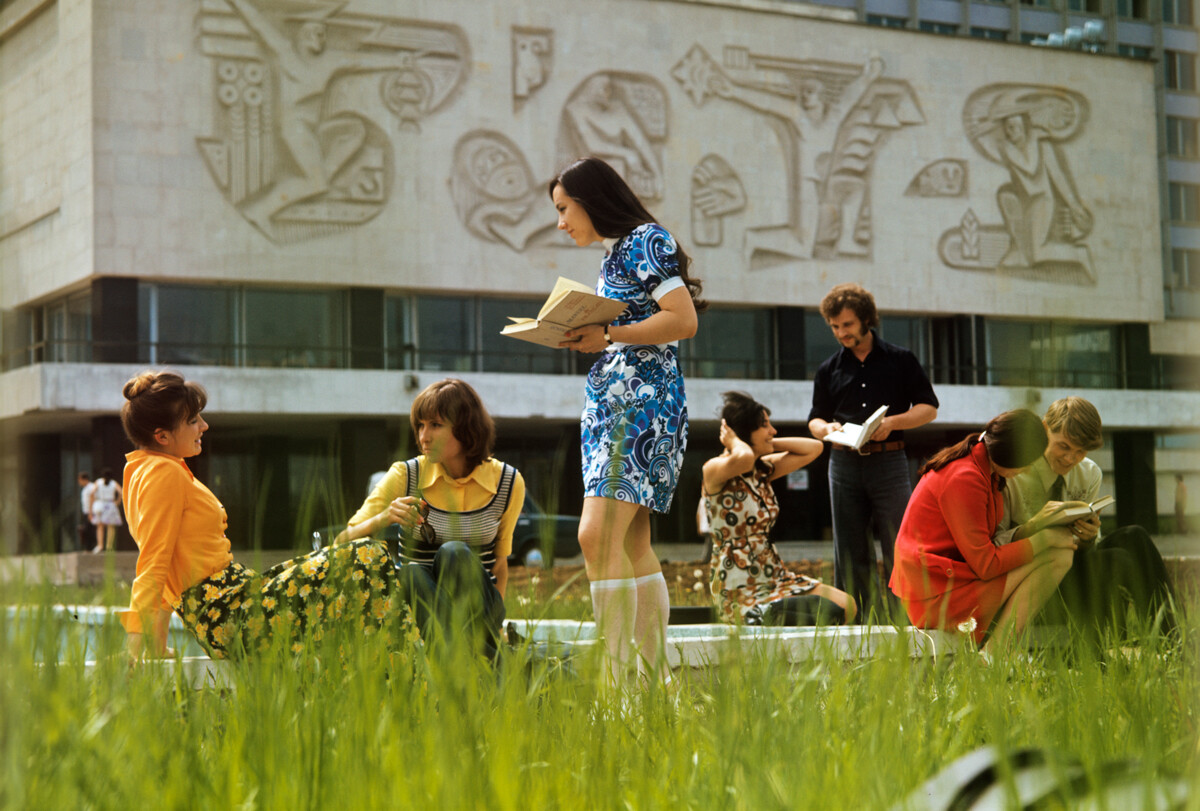 Students in front of the first Humanities Building, 1975

Initially, in 1755, the university had only three faculties – the Faculty of Philosophy, Faculty of Law and Faculty of Medicine. In the 19th century, they were joined by the departments of physical and mathematical sciences, as well as philological departments. After the 1917 Revolution, it was reorganized and new faculties of fundamental sciences appeared: the faculties of Chemistry, Biology, Mechanics and Mathematics, Physics, History, Geology, Geography, Philology and Economics.

Lesson in the lingaphone classroom at the MSU Institute of Asian and African Studies, 1978

Aside from that, MSU has its own educational center for high school students, whose priority is the preparation for enrolling at the university.

6. Headed for more than 30 years by academician Viktor Sadovnichy 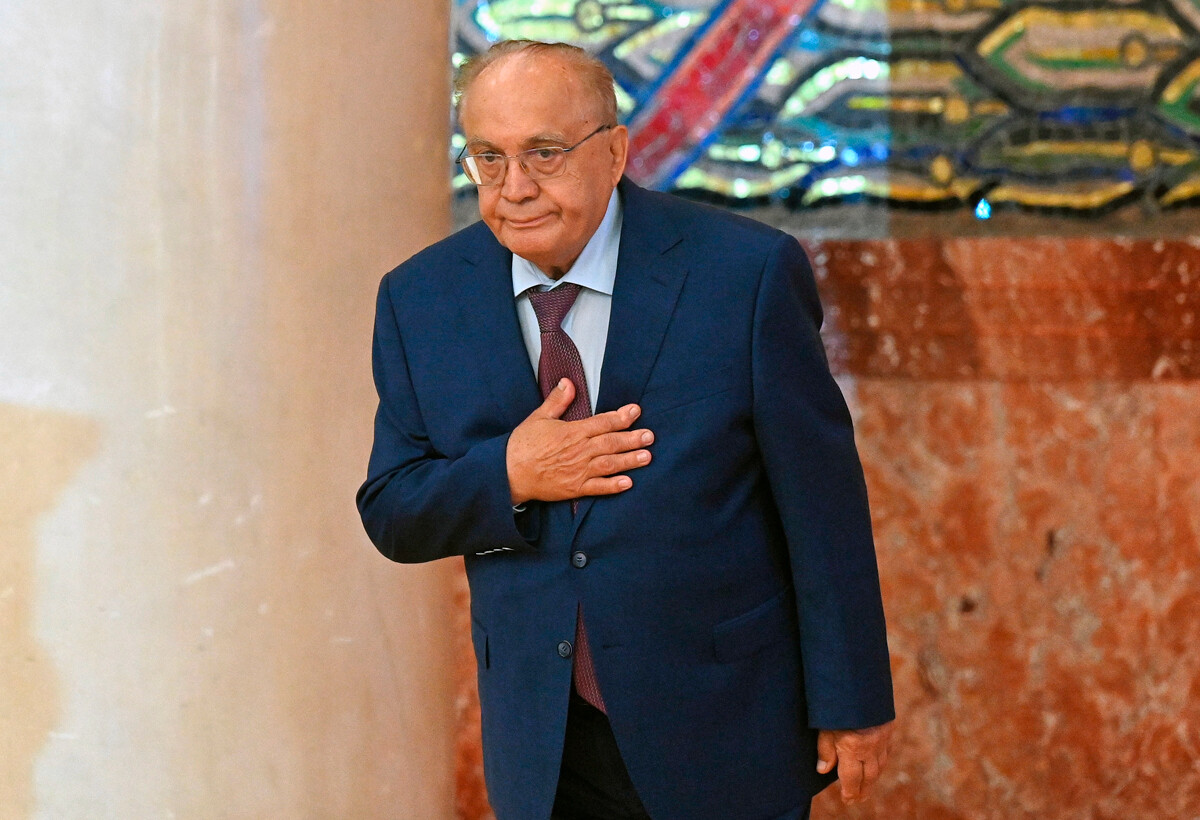 Since 1992, Viktor Sadovnichiy has served as a longtime rector of the university. He himself graduated in 1963 from the Faculty of Mechanics and Mathematics of MSU (that’s why other faculties’ students are often jealous, because they believe he loves his faculty a bit more than the others and pays more attention to it). 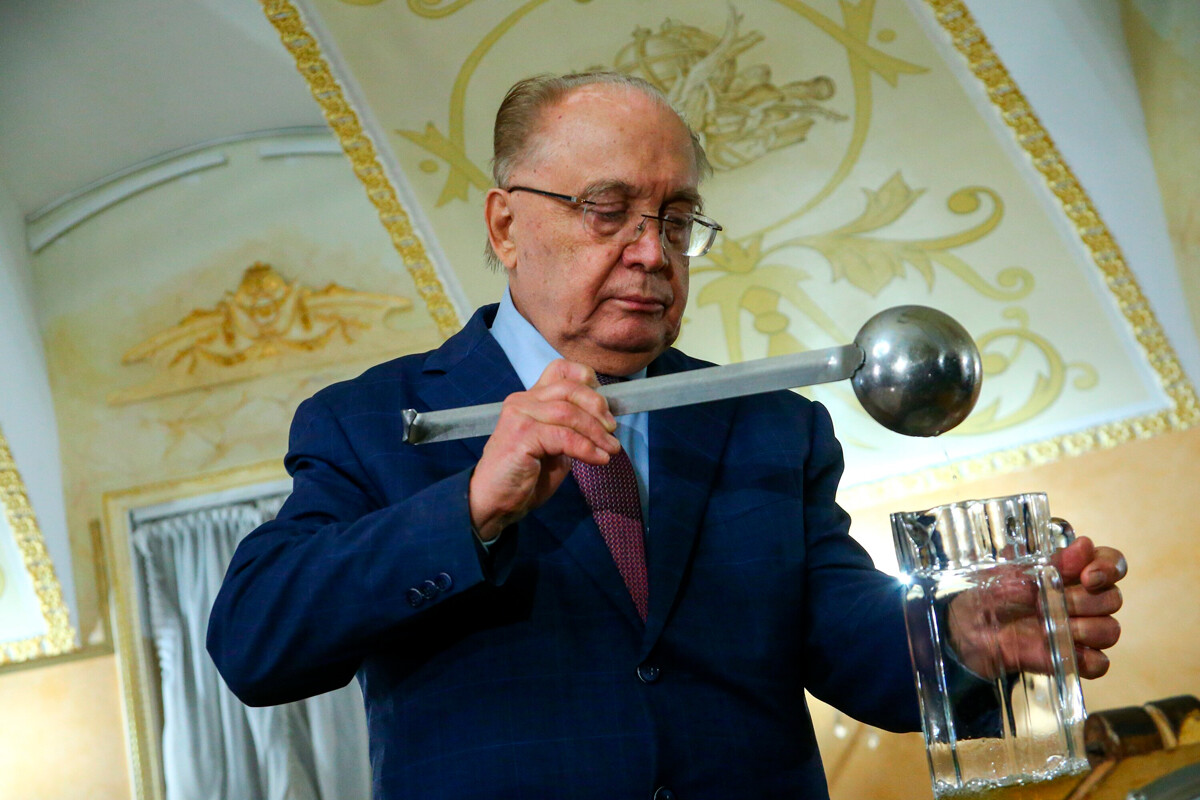 Every year, according to an old tradition, the rector offers students medovukha - a honey-based alcoholic beverage - on MSU’s birthday.

Sadovnichiy also heads the Russian Union of Rectors and has the title of honorary professor at many foreign universities, from the U.S. to Japan. He has a lot of state honors and awards. Aside from that, an asteroid was named after him (‘Sadovnichij’), as well as a type of peony tree (‘Academician Sadovnichiy’). 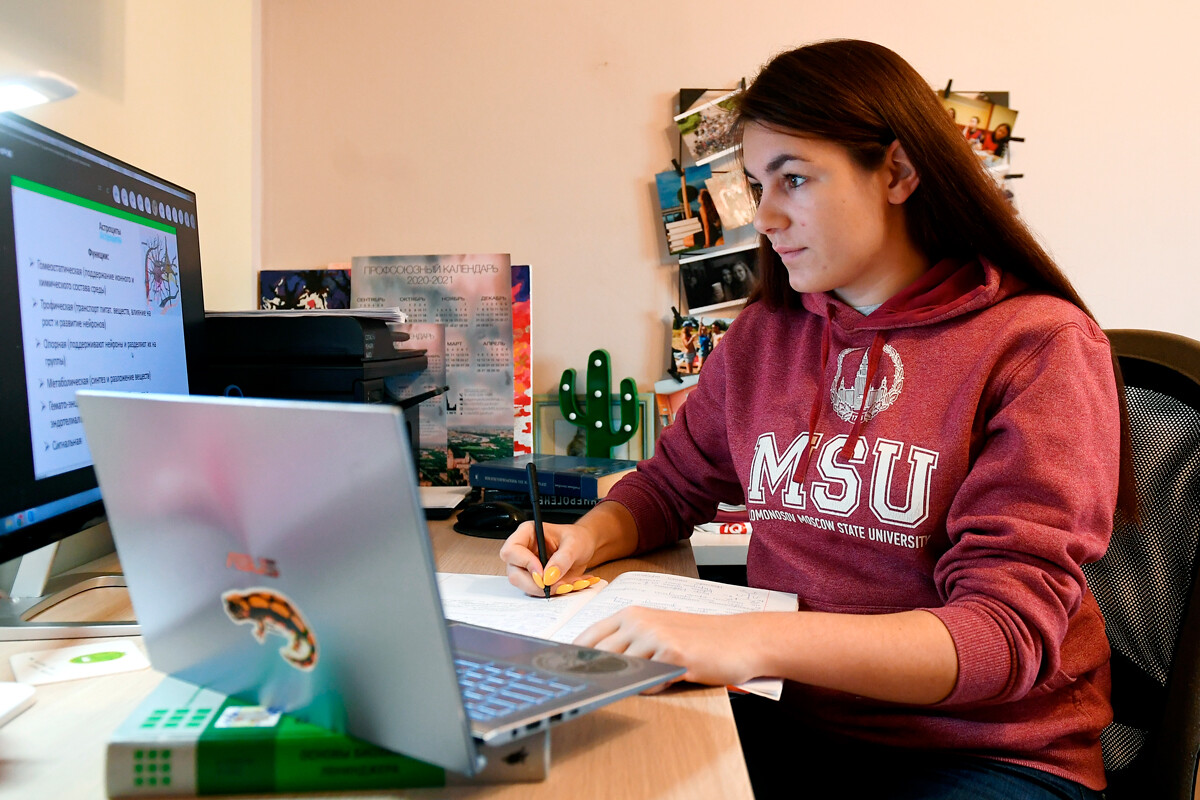 An MSU student getting ready for classes

Today, about 40,000 students attend MSU (almost 4,000 of them are foreign students from 80 countries). It’s simply impossible to count the overall number of graduates of the university for all the years of its existence. Russia Beyond alone has about a dozen graduates (mainly from the Faculty of Journalism)! 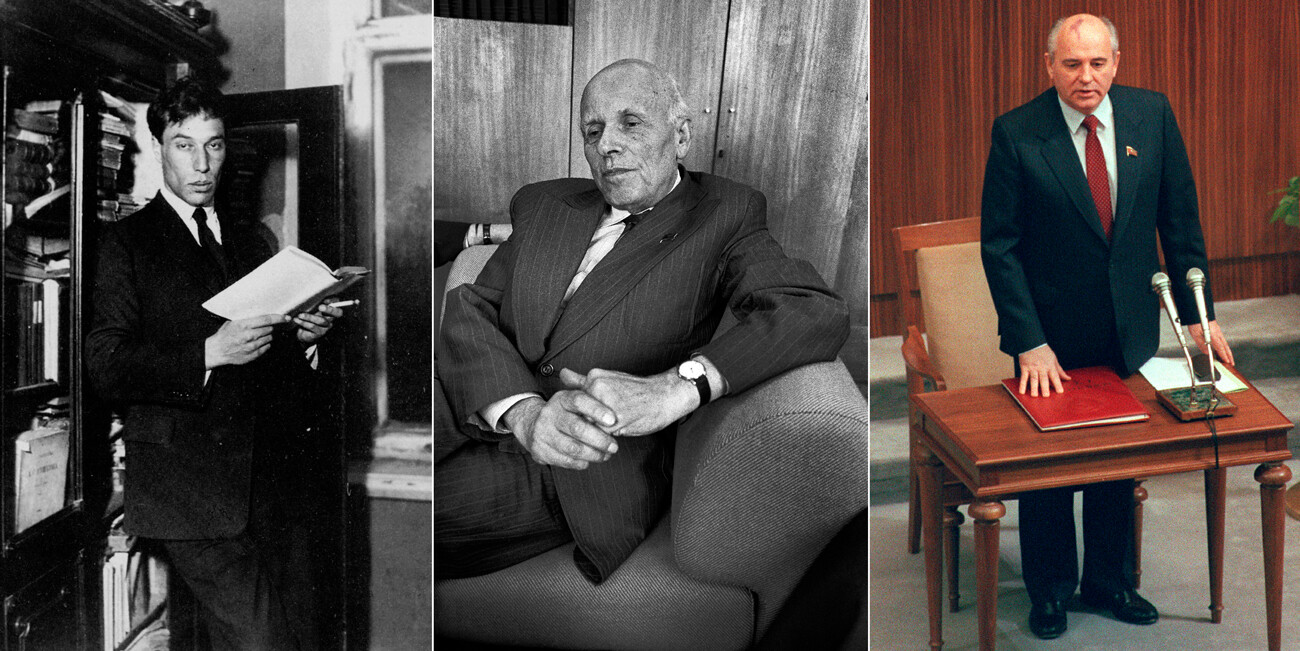