Where the first Russian books were printed 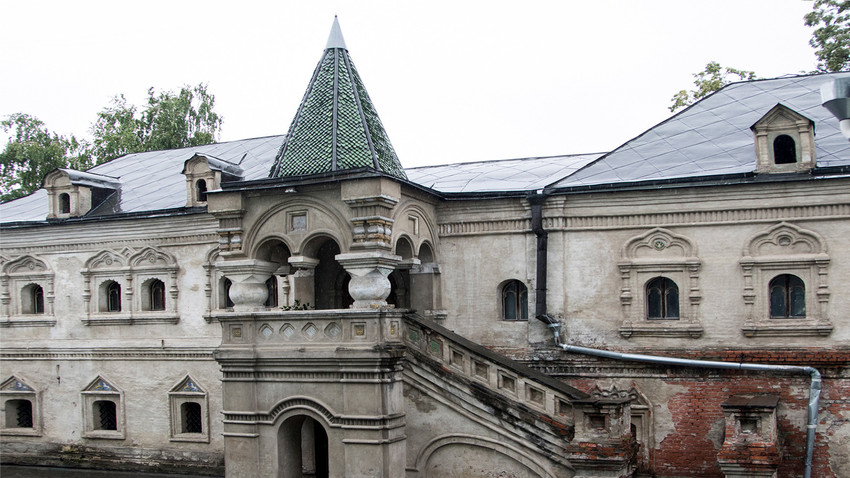 Inside the Moscow Print Yard.

Ilya Ogarev
Located only 500 meters from Red Square, the Moscow Print Yard is considered to be one of most extraordinary buildings in Moscow, as well as one of the earliest secular constructions in the city. Russia Beyond has descended into its dungeons to show you a secret glimpse of ancient Russia.

The building was established at the behest of Ivan the Terrible in 1553 and became the birthplace of Russian publishing. The first publication ever printed in Russia, with a known date, was The Acts and Epistles of the Apostles (also known as Apostle). It was completed in 1564 and printed at the State Print Yard by Ivan Fyodorov (the father of Eastern Slavonic printing) and Pyotr Mstislavets (a Belorussian printer).

During the Time of Troubles in 1611, the Print Yard burned down almost entirely and was rebuilt in 1620.

The first Russian newspaper, Vedomosti, was also printed here in 1703 under Peter the Great.

The historic headquarters of the Print Yard now the Moscow State Institute of History and Archives. 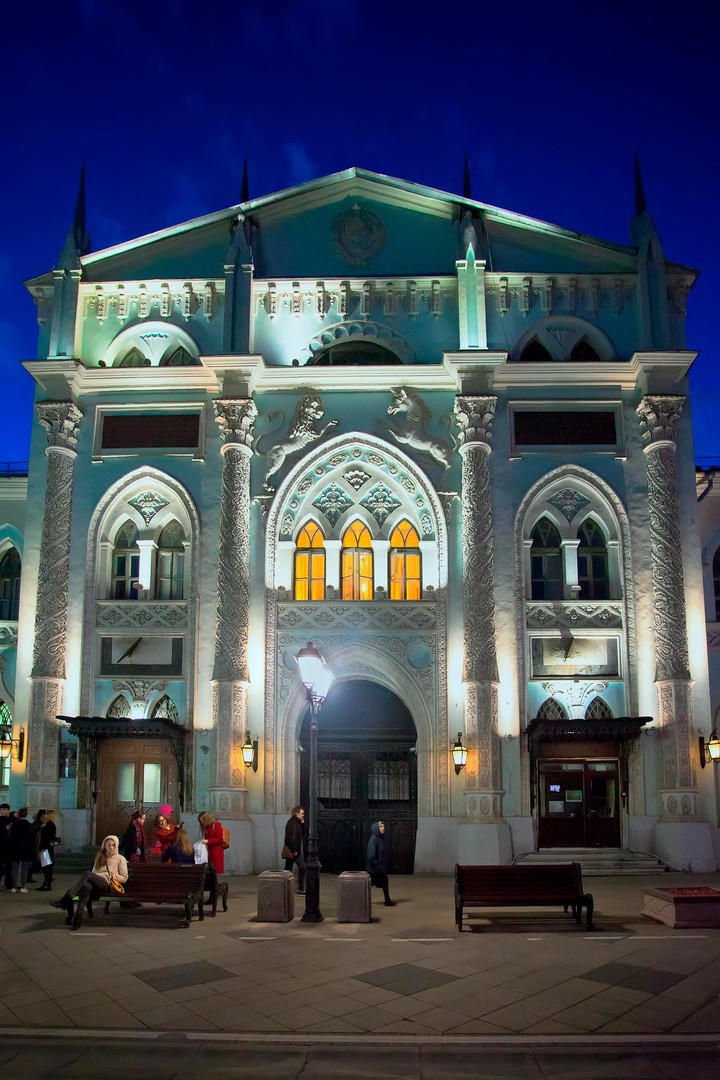 The lion and unicorn on the facade of the Moscow Print Yard symbolize power. They are believed to have come from England.

Such buildings not only have a rich history but also contain mysteries and tragedies. The Print Yard is no exception.

Accompanied by professor and archeologist Dmitri Abramov, we descended into the dungeons of today’s Institute of History and Archives to find out what escapes the eyes of tourists—despite being so near to Red Square.

Going down through the centuries

The oldest room in the printing complex is the Pravil’naya Palata [editorial room], where books were edited into their final drafts. 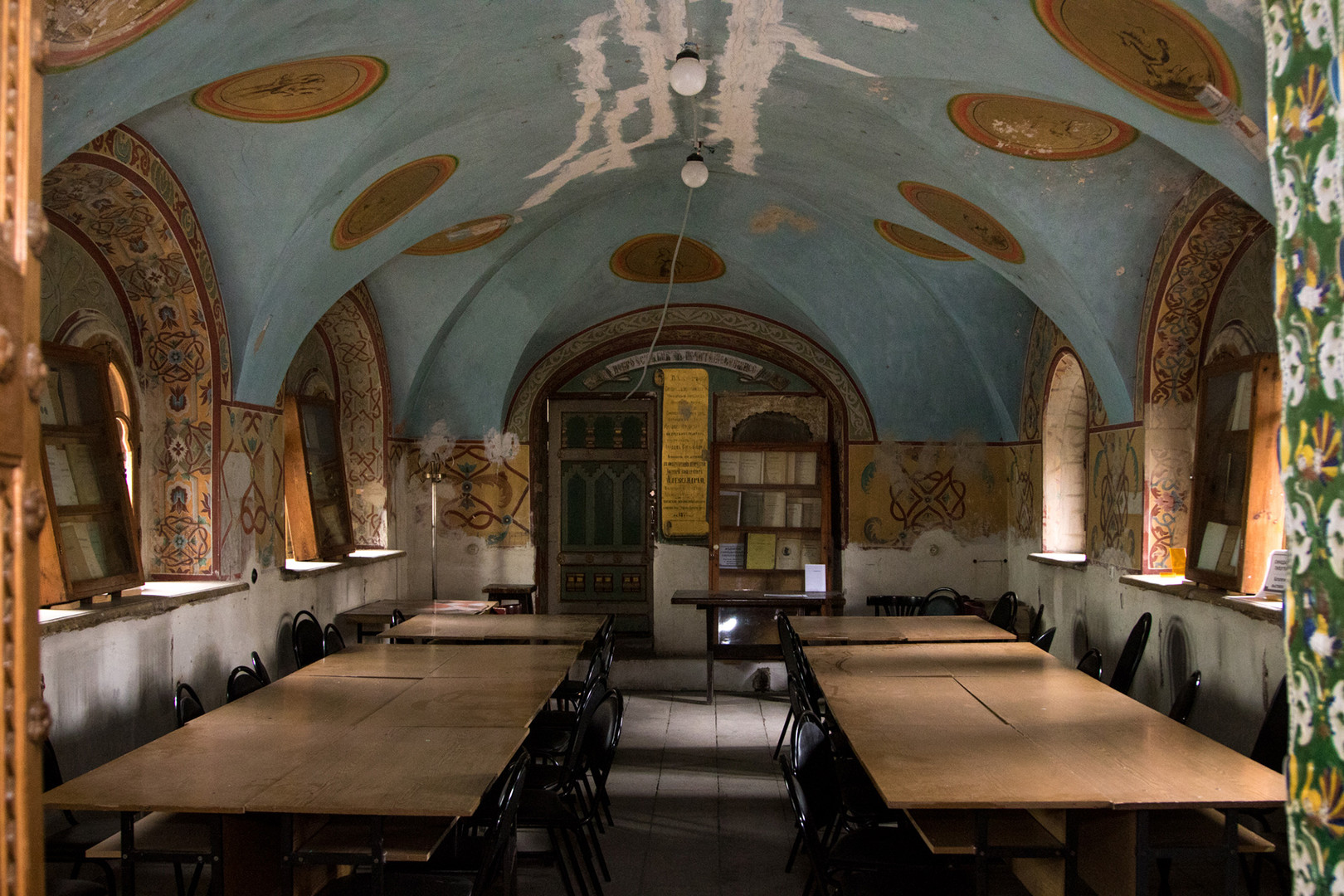 Rooms of the Print Yard were restored in 1875 by original pictures and tiles.

According to Abramov, it is here where the smartest people in Russia would sit, including typographists and artists (at the time, books were quite expensive to produce and were regarded as works of art). Today, the room is used as a classroom for the Institute of History and Archives.

Personally, I dream of studying in such a location—just take a look at these paintings and murals.

The room located opposite was used as a book depository and functioned as the first national library. Apart from the finished volumes that had been printed on site, there were also handwritten ancient Greek books and chronicles brought from Mount Athos. These were intended for students of the Slavic Greek Latin Academy—the first higher education establishment in Moscow, which was built here in 1687.

Today this space is also used for classes.

Actually, the most interesting stuff here lies underground. We went down to the first floor below ground level, which had actually been the first floor a few centuries ago. There was a room for the workers, who boiled the paint and cast letters with the aid of the huge furnaces. 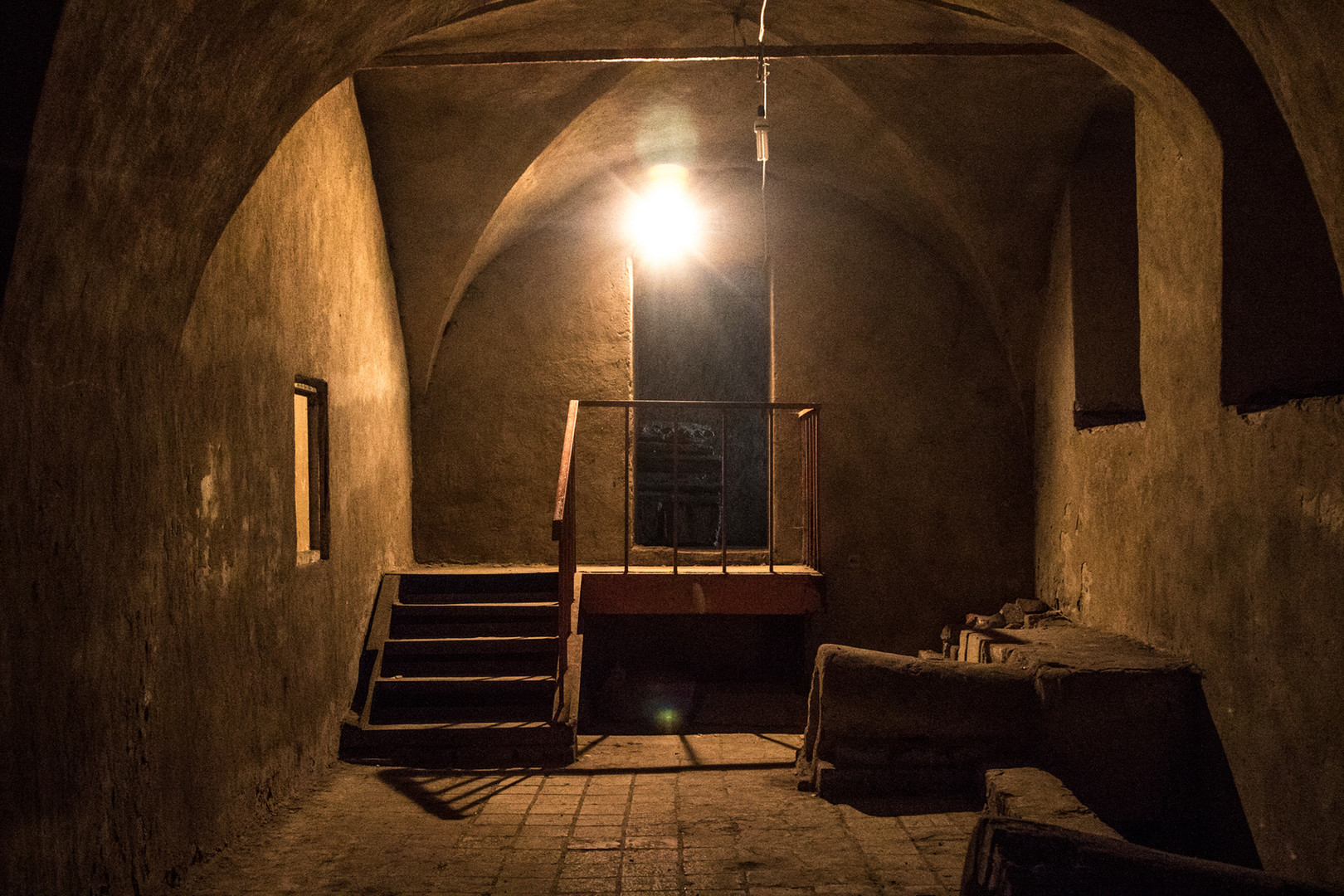 In the weak, dim light, the smell of antiquity enveloped us.

Here, we have reached the ruins of the very first Print Yard, now about 15 meters under ground.

A little further down, we could see a blocked passageway that the archeologists obviously haven’t reached yet. We carefully climbed over the pit, filled with broken bricks and trash. It appears to be a pathway to the oldest wall of Moscow. 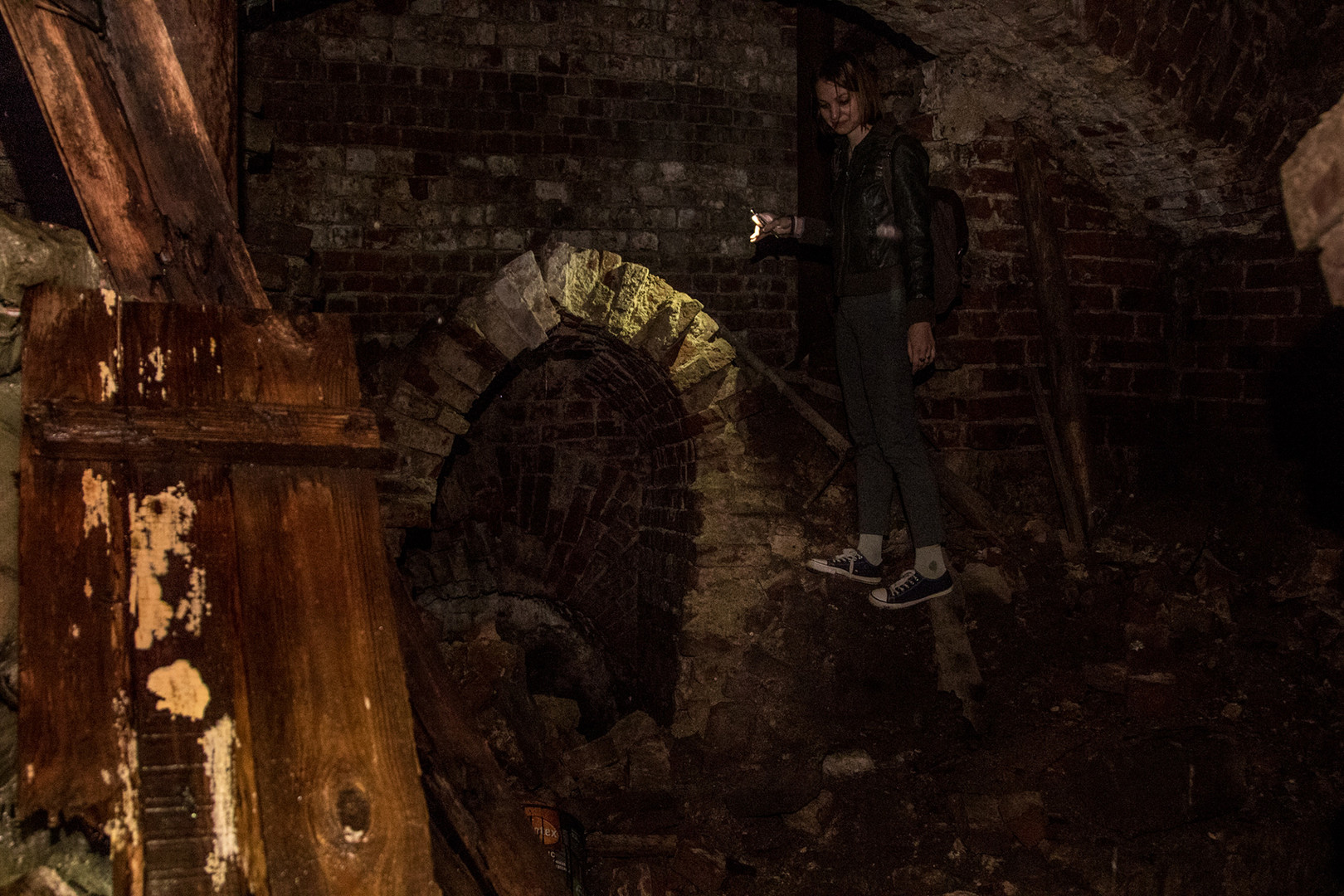 Transfer to the Synod

In 1721, the Moscow Print Yard was transferred to the Most Holy Synod, the highest governing body of the Russian Orthodox Church, and the publishing house became religious.

In the late 18th and early 19th centuries, the appearance of the building changed as well. Instead of old workrooms and cells, a monumental building in the Russian style was built. However, the facades remained in the Baroque style.

Today, the historical heritage of the building is protected—and not just by the government. Recently, a special department was created within the Institute of History and Archives—the Museum-Educational Complex, which now oversees all archaeological and restoration work.

The Synodal publishing house was closed in 1917 and replaced by Soviet archival institutions. 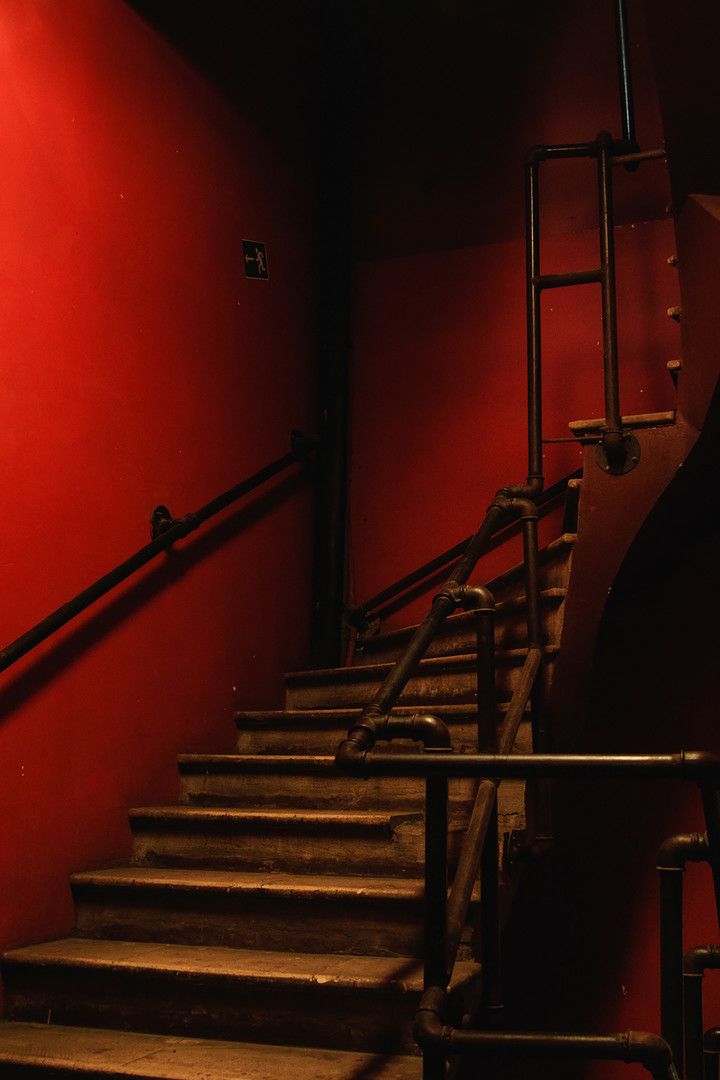 The building was almost a holy place.

We kept walking. Passing by different rooms, each with centuries of history, until we entered … the sports hall!

All joking aside, during the Soviet Union and perestroika, many of these rooms were used by the Institute and for various industrial purposes.

In the 1990s, several of these halls were rented by the bar, Pivnaya kruzhka [beer mug]. When Sergey Sobyanin became the mayor of Moscow in 2010, the bar was closed. 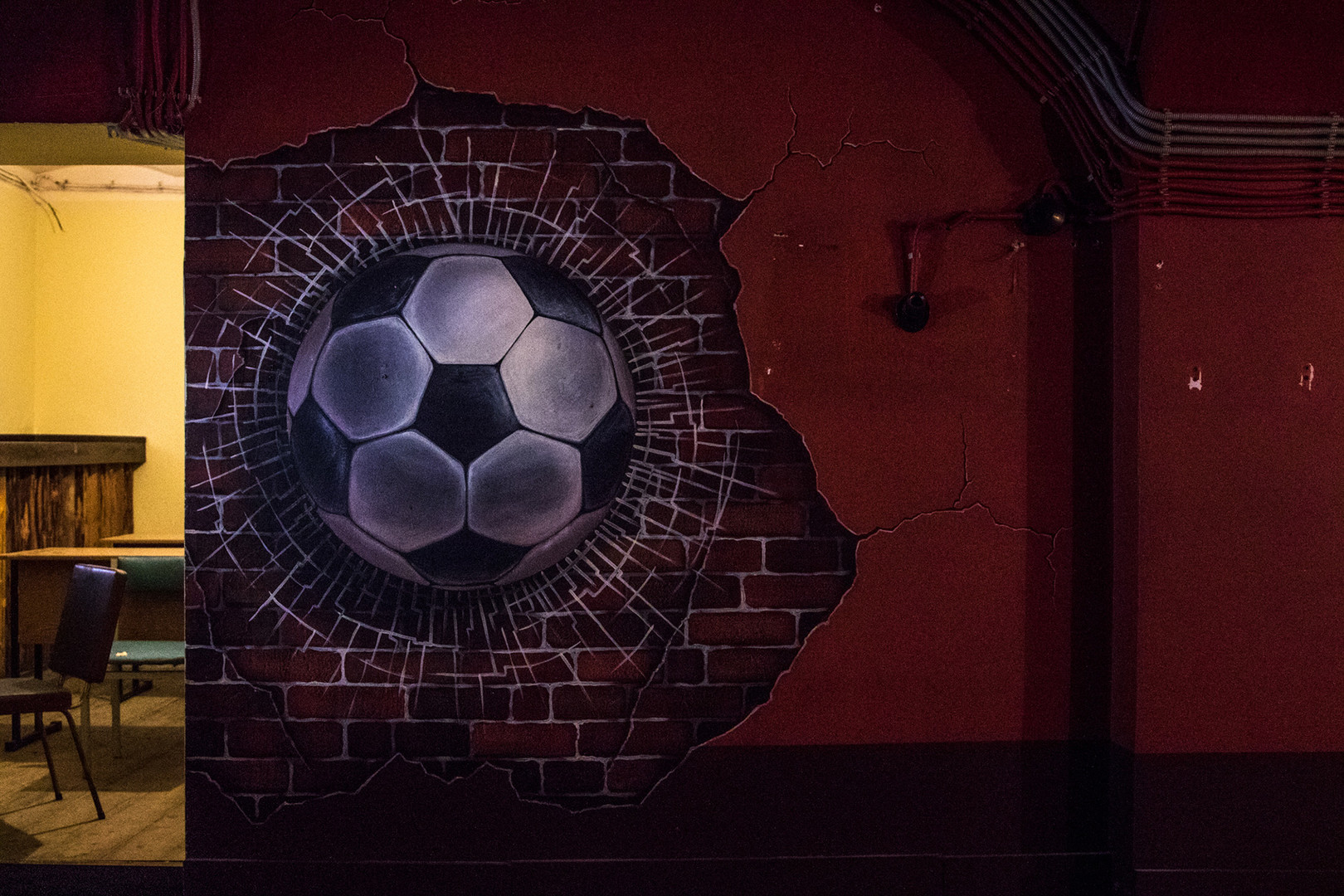 The place was also used as the dining room within the institute.

From 1931 to the present day, the Moscow State Institute for History and Archives has been based here, at the address Nikolskaya 15.