How did Russian soldiers live on the front lines of WWI?

History
Boris Egorov
When we think about World War I, we imagine endless grey days in dirty trenches, heavy artillery fire, and suicide infantry attacks on machine-gun nests. But that’s not the whole truth. There was another side to army life: holidays, celebrations, fun and simple foolery. 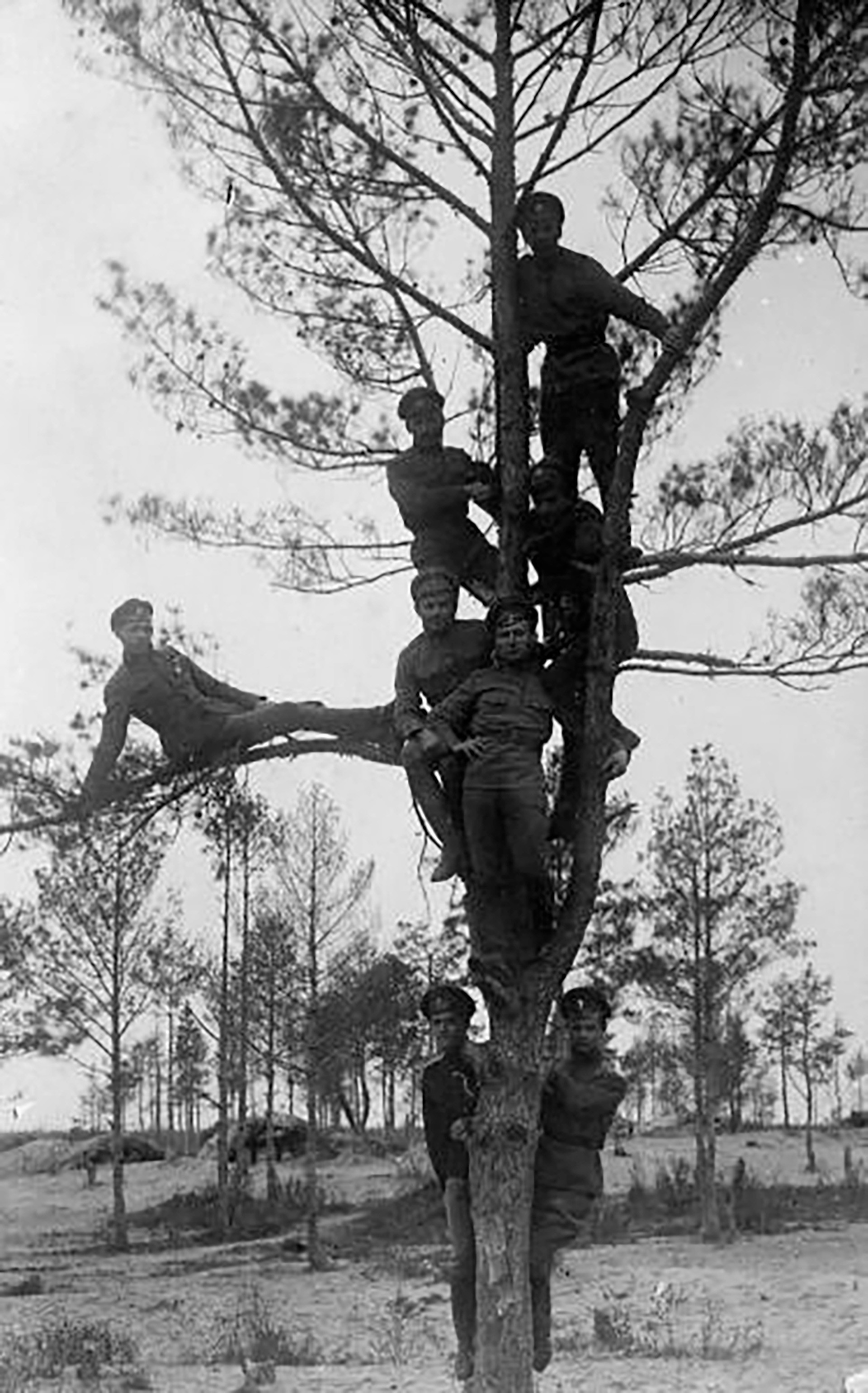 The First World War, or the Great War as it was called by contemporaries, was marked by wide use of trench warfare, when for months, if not years, troops could sit in trenches opposite each other. Soldiers’ days were full of drudgery and boredom. No surprise then that they were eager to spice up the daily grind any moment they could. 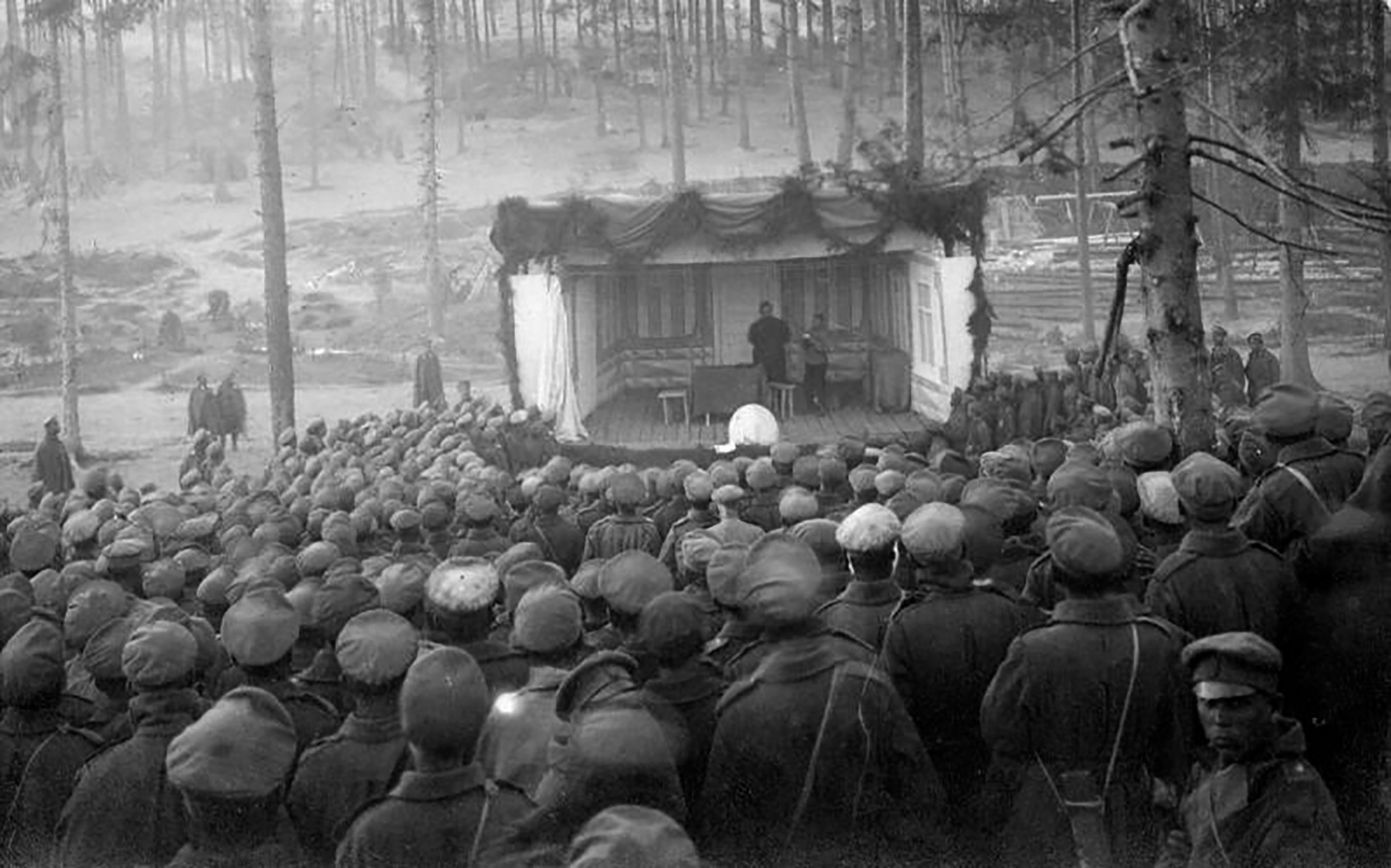 Theatrical performances were very popular among the soldiers. Sometimes they staged their own amateur shows, but the real celebration took place when famous artists visited on tour. 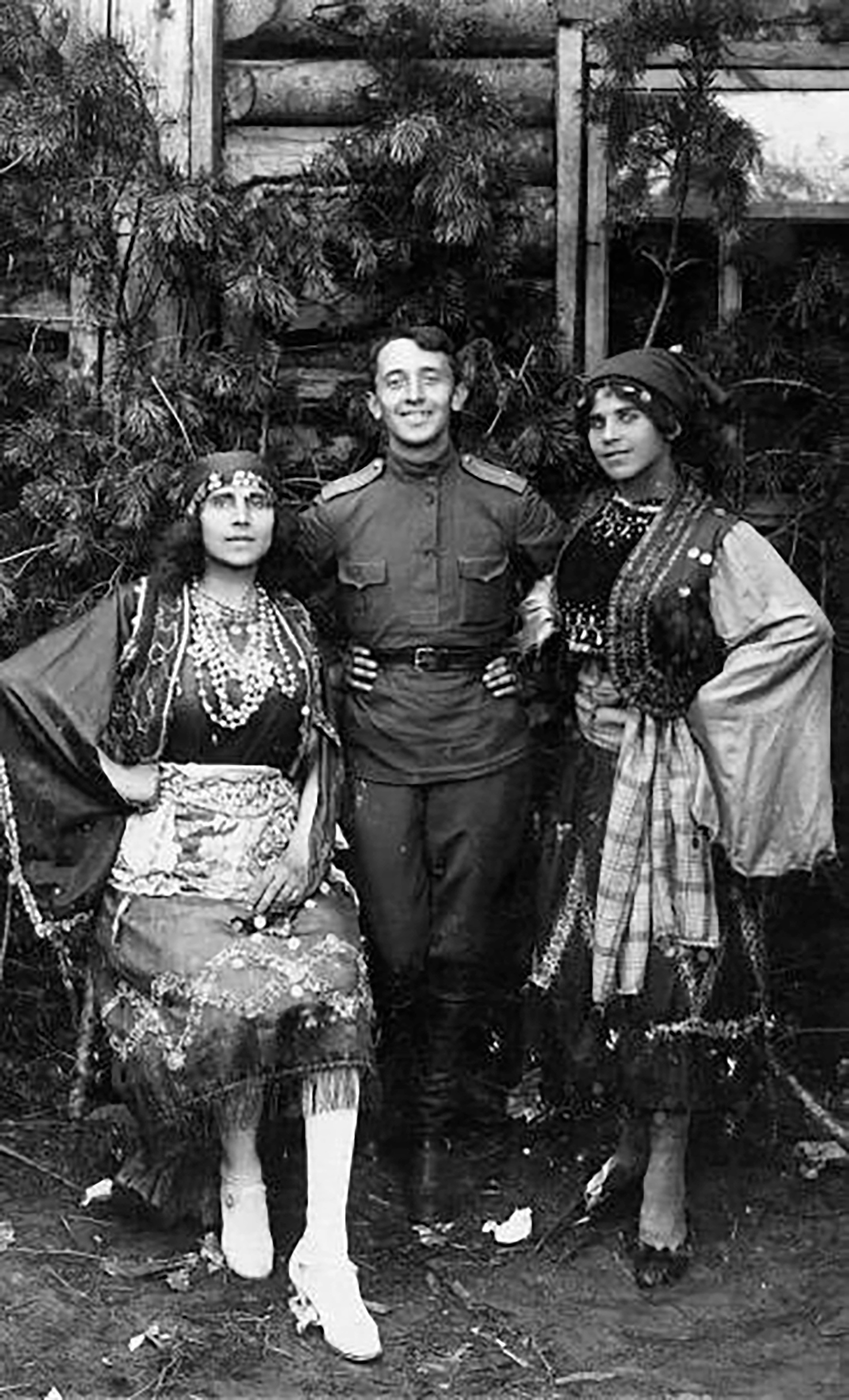 One soldier wrote in a letter home about a visit by the well-known ballerina Evgenia Lopukhova: “Our ‘Knights’ from Kursk, Smolensk, Ryazan and other places circled the artists and stared at how Madam Lopukhova was dancing. And she was doing it great. Forest and hills protected us from the enemy, and we were having fun right under the nose of the Germans.” 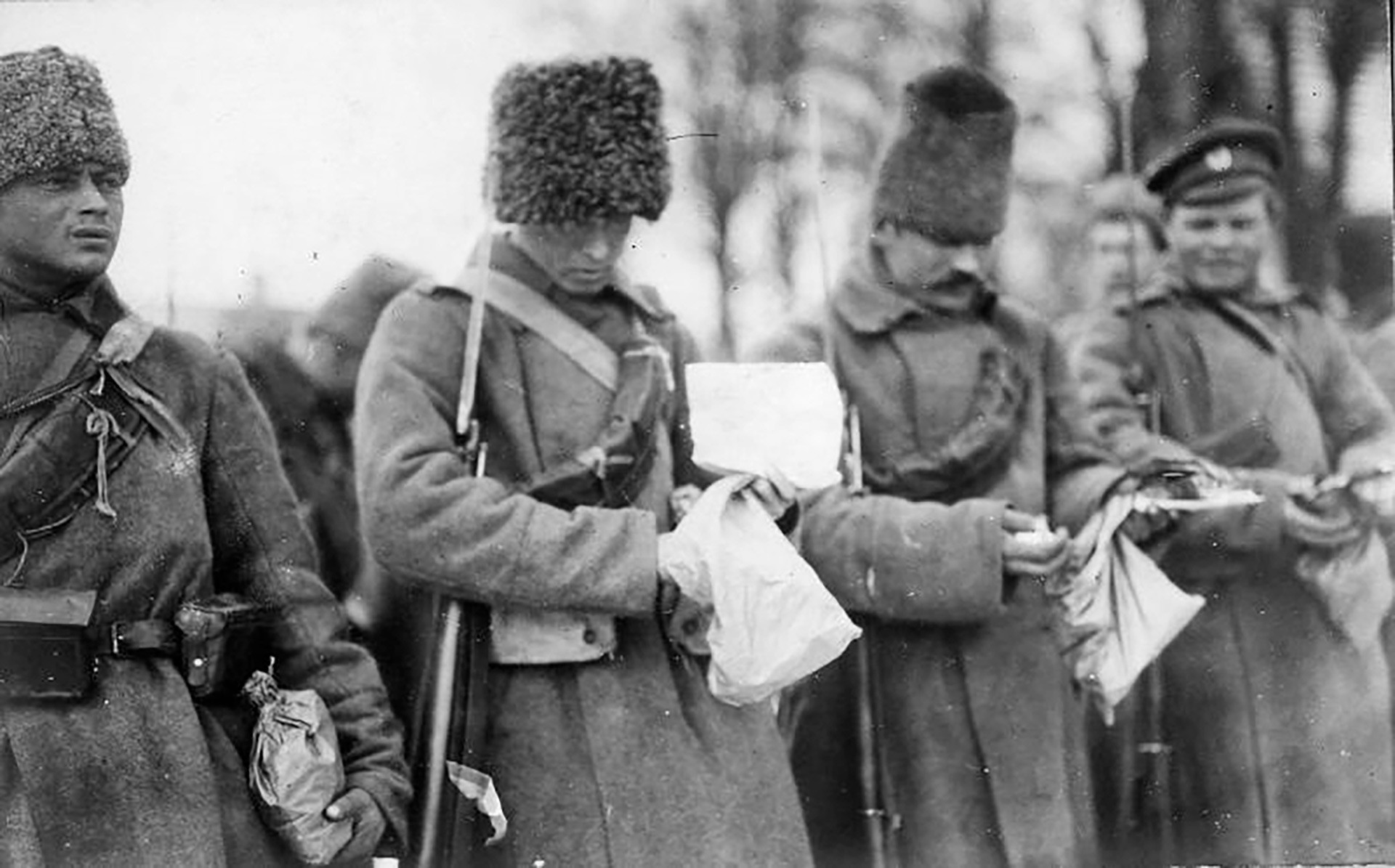 Soldiers received gifts not only from their families. Numerous rear organizations performed charity works to bolster troop morale. Presents for soldiers were made by the city authorities, individual businessmen and common citizens. As one correspondent of the Sovremennoye Slovo (“Modern Word”) newspaper wrote, soldiers saw these gifts as a symbol of the strong ties between society and the army, proof that the country hadn’t forgotten about them. 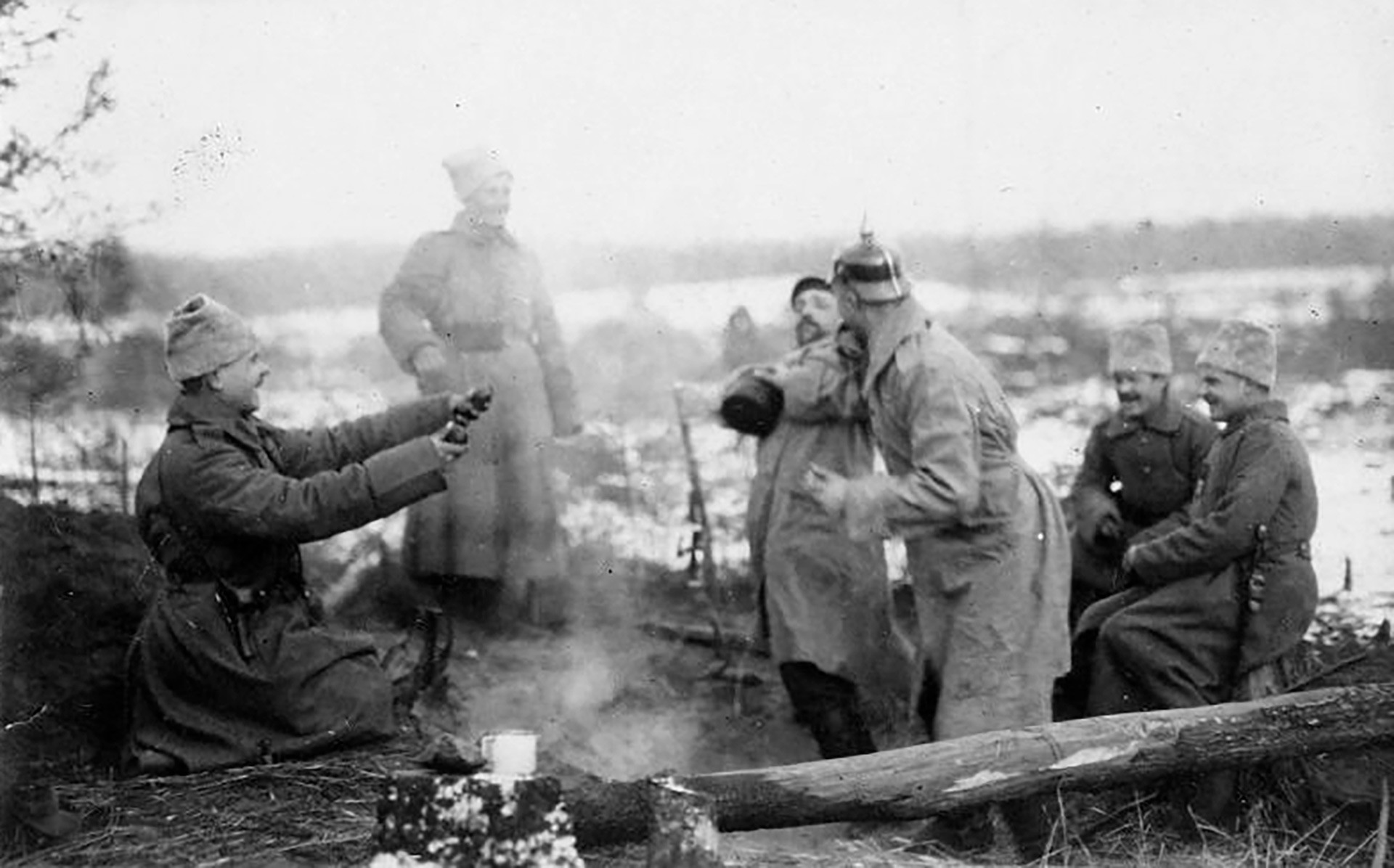 Mass fraternization between Russian and German (and Austrian) soldiers on the Eastern Front of World War I began in late 1916 and spread widely in 1917, when the Russian Army was completely demoralized. The photo was taken in 1915, and may show one of the rare cases of fraternization that happened that year. This could also be foolery on the part of Russian soldiers, having changed into trophy enemy uniform. 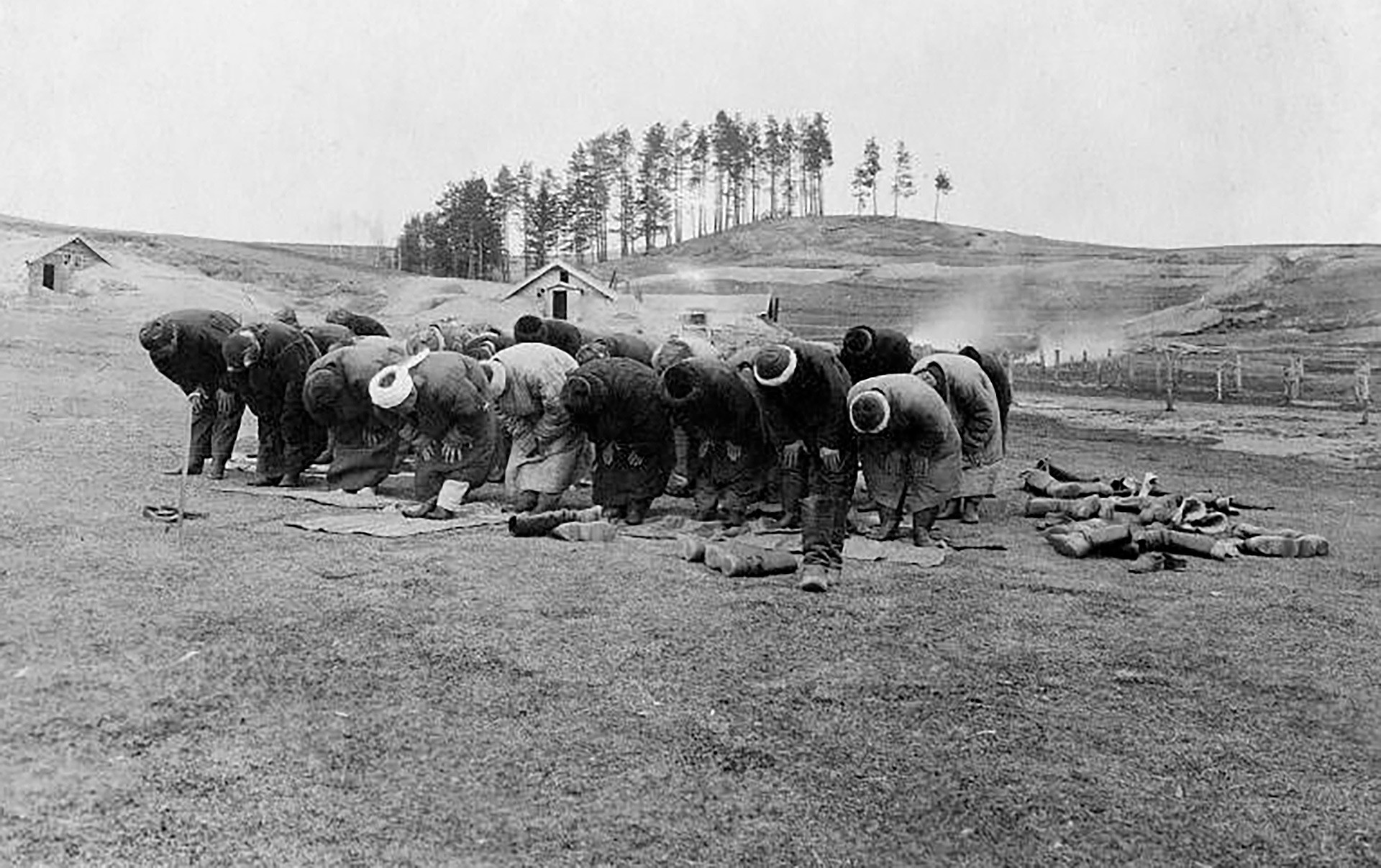 Muslim soldiers of the 267th Dukhovshchinsky Infantry Regiment at prayer. About 1.5 million Muslims served in the Russian Army during World War I. Fearing that they could side with the Ottoman Empire, which had declared itself the protector of all Muslims, the Russian authorities deployed Muslims mainly in the European theater of operations. 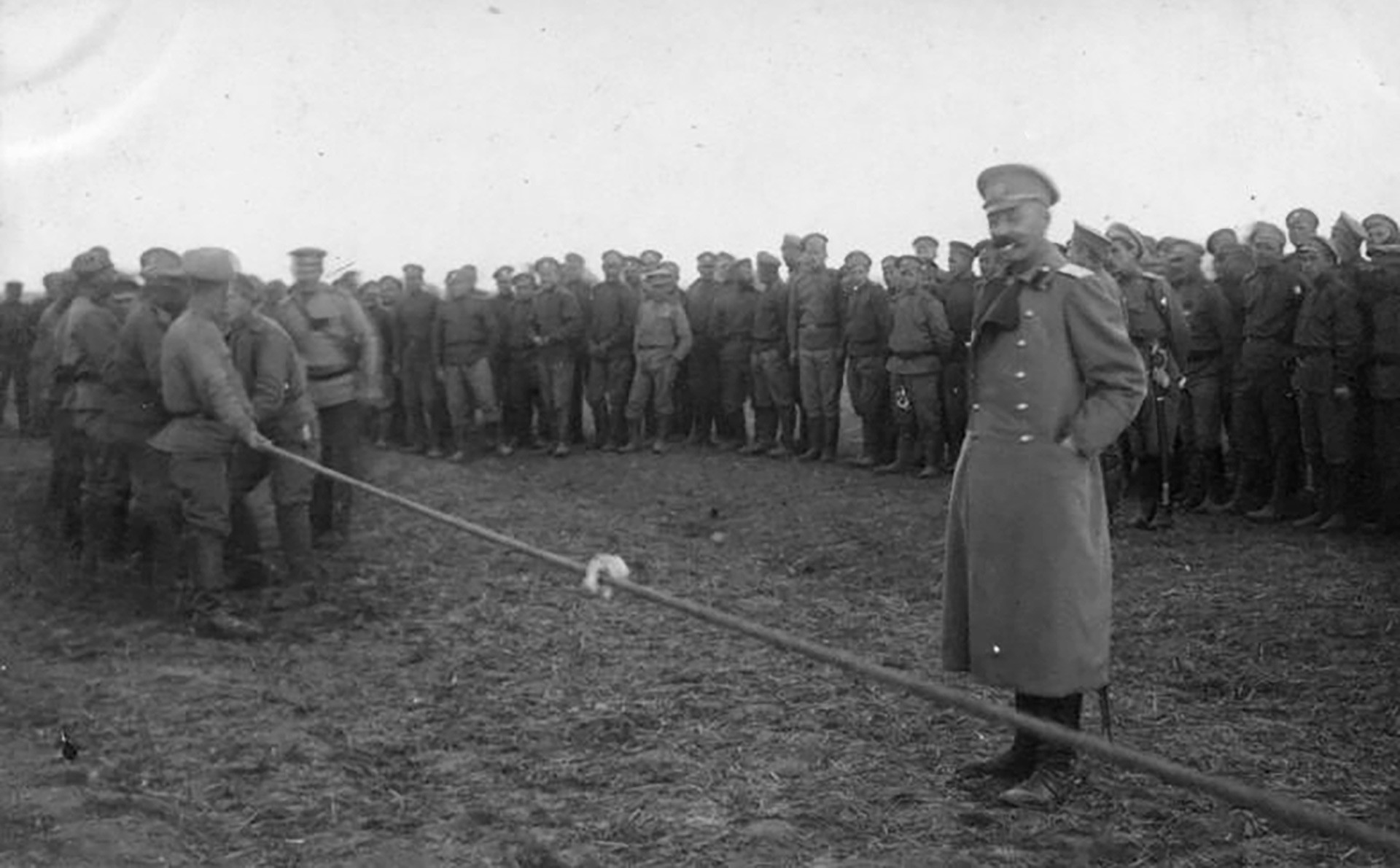 Soldiers prepare for a tug-of-war competition – one of their most beloved activities. 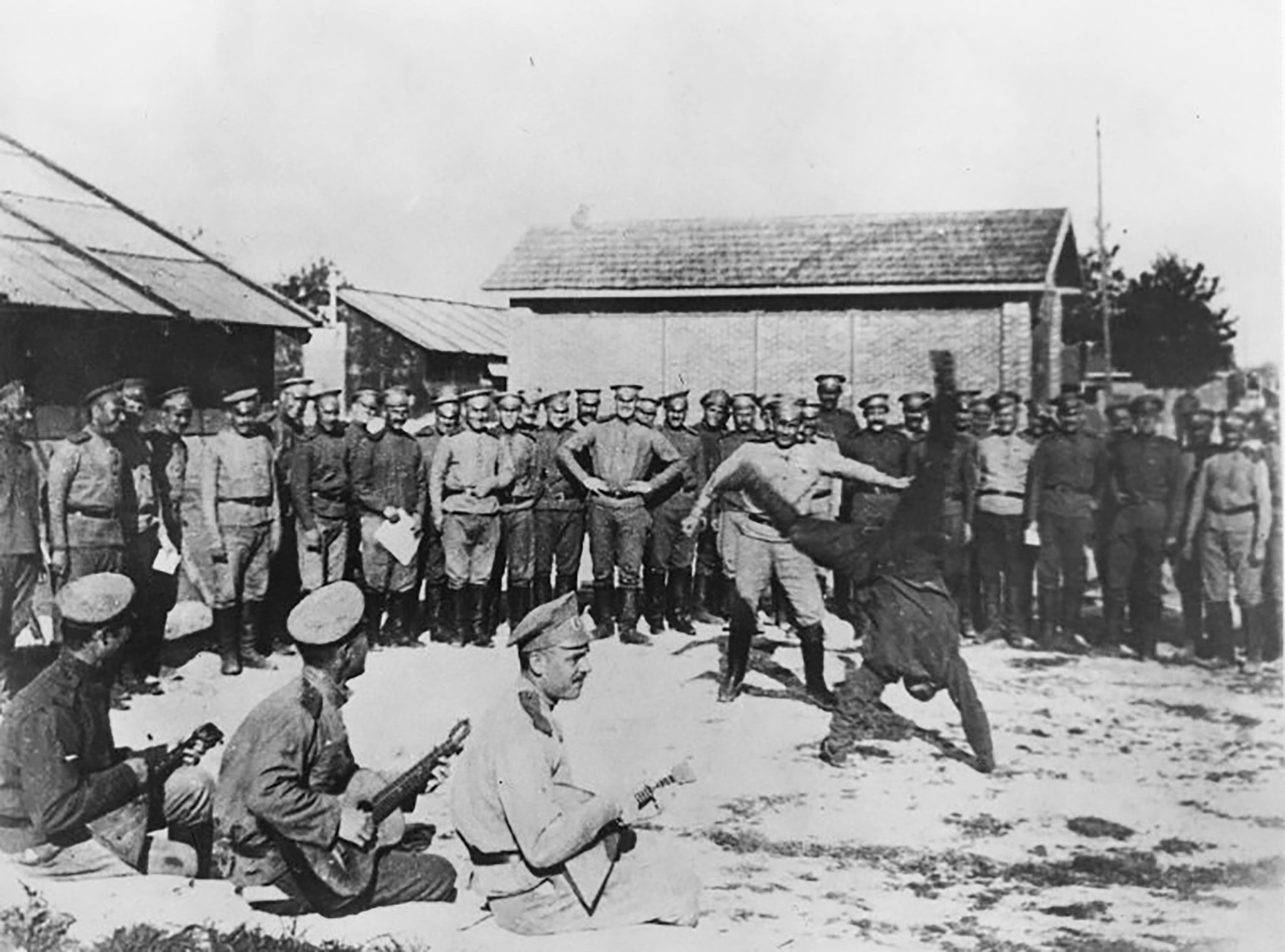 Russian soldiers have fun near the small French town of Mailly-le-Camp in 1916. Over 45,000 officers and soldiers fought in the Russian Expeditionary Force in France and took part in the defense of the Champagne Region and the Battle of Verdun. 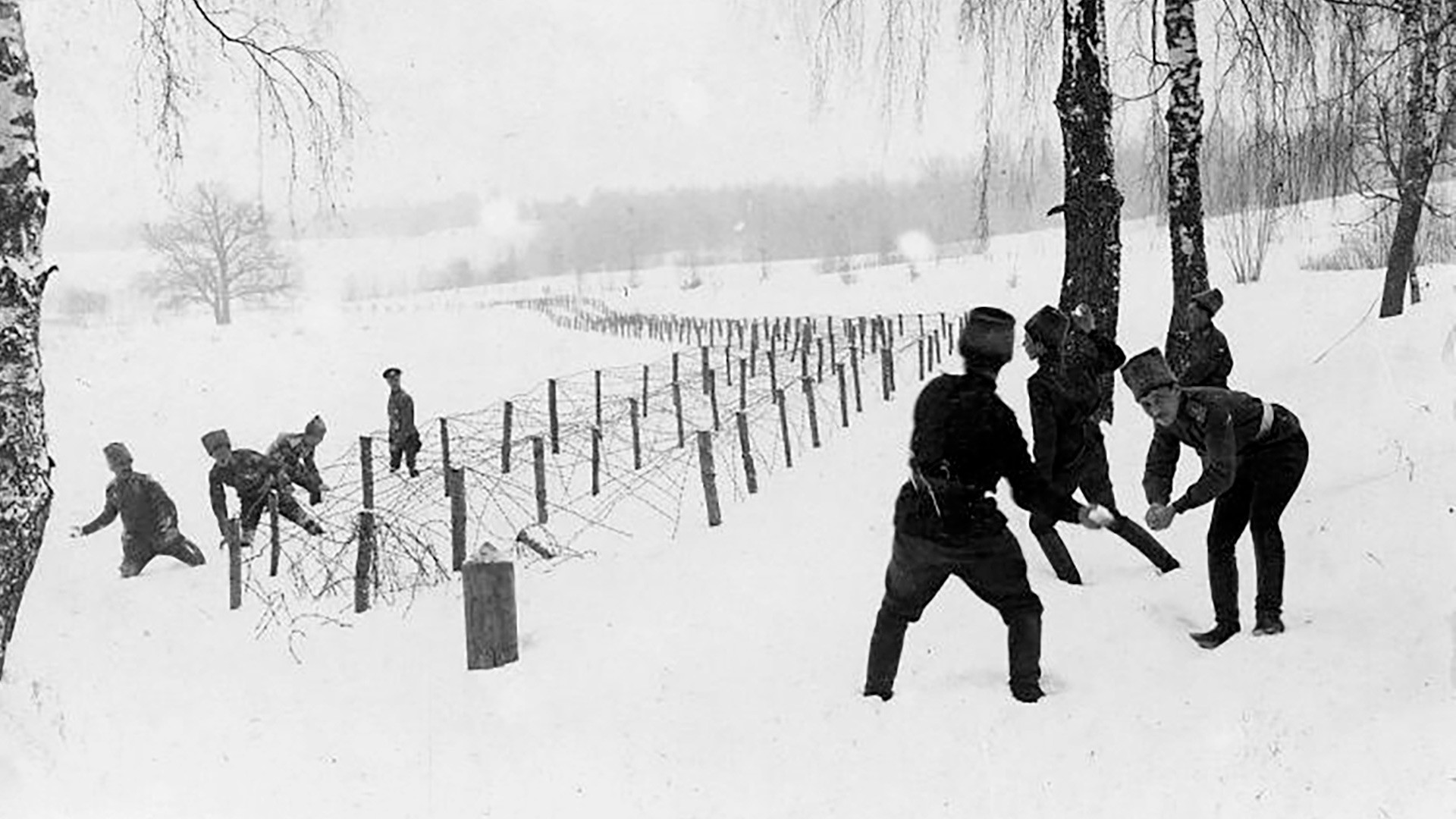 Soldiers of the 267th Dukhovshchinsky Infantry Regiment have a snowball fight in 1916. 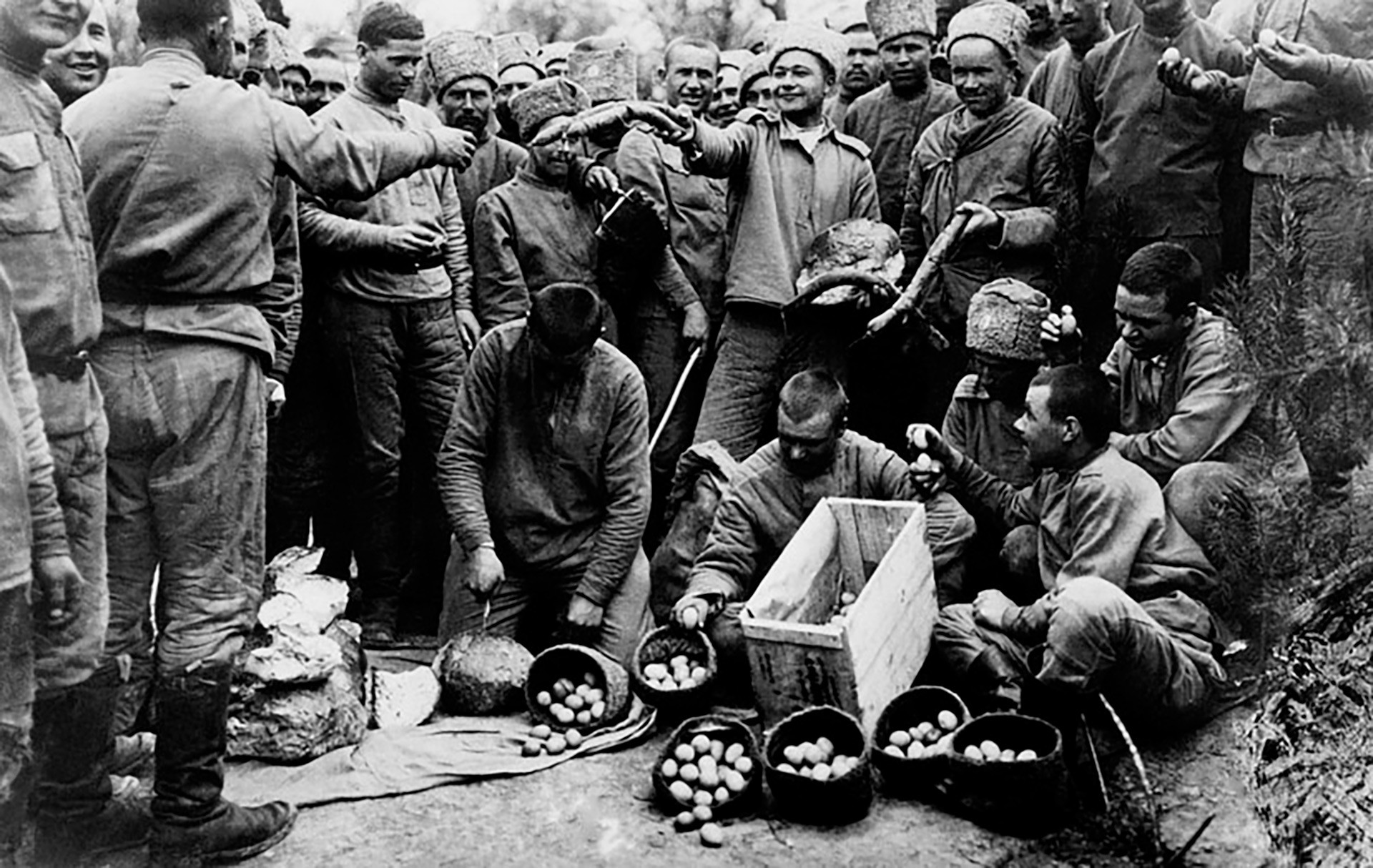 Soldiers prepare to celebrate Easter and hand out eggs and cakes to each other in April of 1917. Being in a state of complete anarchy, by that time the Russian Army was suffering from mass desertion, insubordination, fraternization with the enemy, and lynching of officers.