Locked up, lost, or looted: 5 Romanov treasures that have suffered different fates

History
Russia Beyond
The story of the Romanov crown jewelry collection is as mysterious as the family’s tragic death. While some of their gems were sold or lost, some survive to this day and are locked in the state vaults.

Until the 1917 Revolution the Romanov family ruled Russia for over 300 years, and during this time accumulated a large collection of crown jewels made by the best craftsmen. These include jewelry masterpieces from regalia and Faberge eggs, to bracelets and brooches that impressed European ambassadors and rulers so much that many mentioned these gems in their memoirs after visiting Russia’s imperial court.

After the fall of the crown and the devastating civil war, the young socialist state wasted no time in selling this jewelry to raise funds to build a new society. Priceless treasures amassed by the old regime were auctioned off or sold directly to millionaires from the U.S. and Europe 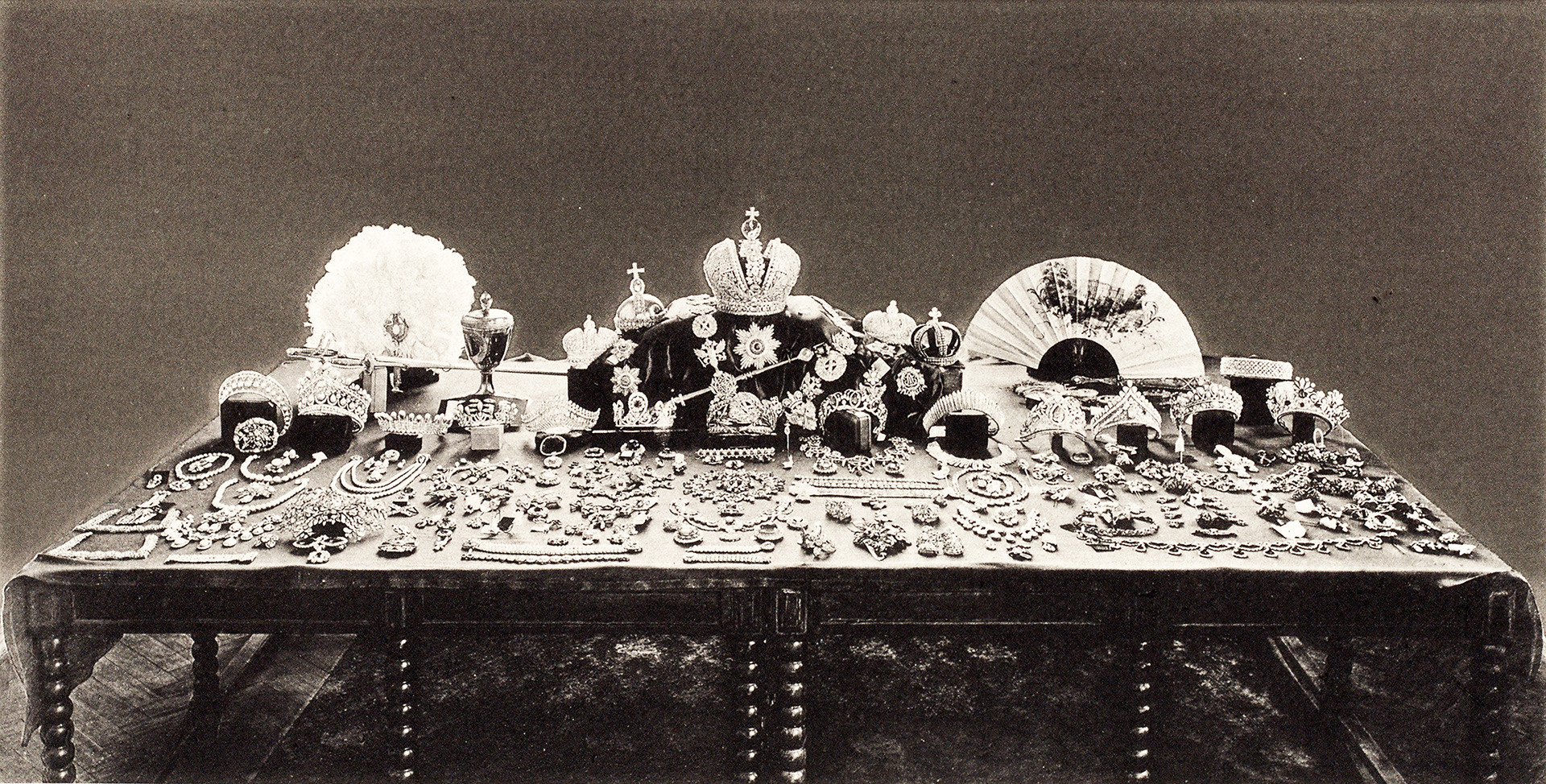 The famous photo taken by the Soviet commission in 1922 shows the large part of the Romanov crown jewelry collection.

items, mainly ladies’ jewelry, were divided up into small pieces and sold discreetly. Some found new owners abroad or lost without a trace. However, a number of important pieces remained in the country and are now kept under lock and key in the Kremlin.

1. The Imperial Crown of Russia 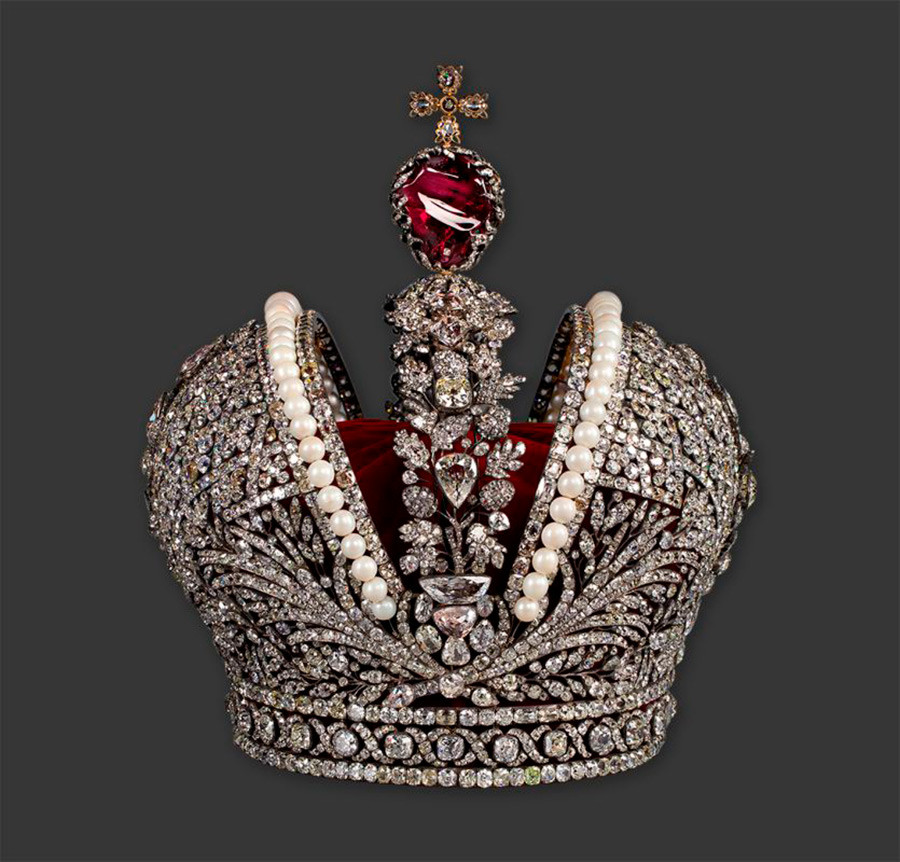 The Imperial Crown of Russia, also known as the Great Imperial Crown, was the main symbol of power for Russian monarchs and the main Imperial regalia from 1762-1917. It was used by all Russian monarchs starting with Catherine II and ending with Nicholas II. Created by court jeweler George Friedrich Eckart and diamond craftsman Jeremiah Posier in just two months for Catherine II, the crown is decorated with 4,936 diamonds (2,858 carats), 75 large Indian matte pearls, and a 398.72-carat spinel.

After the 1917 Revolution, the crown luckily survived and remained in the country. Today it is locked in the Diamond Fund collection, but it is not on show to the public because it is simply too valuable. To showcase the of the crown, however, a special replica was made in 2012 costing around 1 billion rubles ($15.1 million) and was exhibited all over Russia and even abroad. 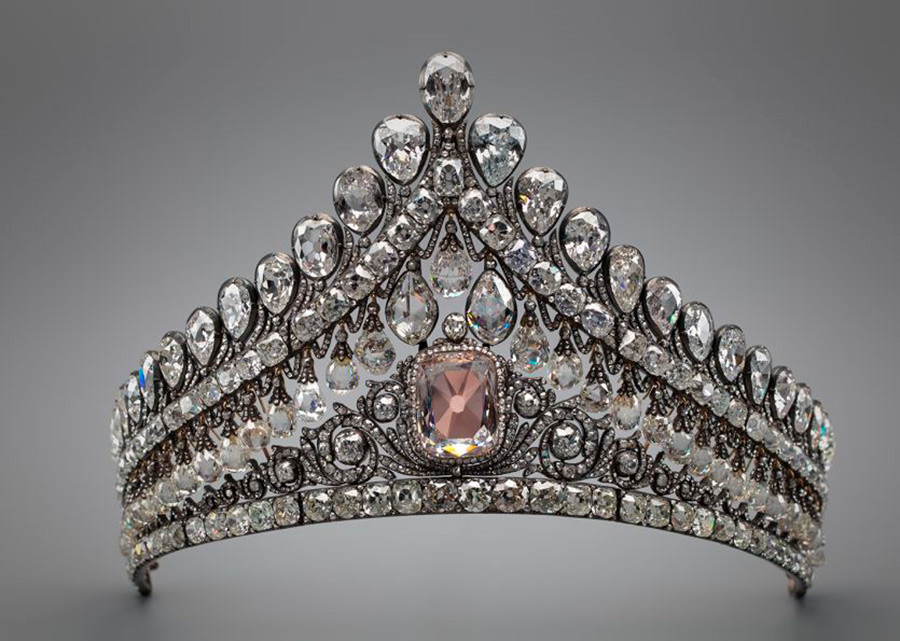 Another treasure kept by the Diamond Fund is the kokoshnik diadem that belonged to the wife of Emperor Paul I — Empress Maria Feodorovna. Arguably, the only original diadem still in Russia, it survived the Revolution and is now an invaluable part of the fund’s collection.

A regular element of the imperial bridal look, the triangular diadem in the Empire-style is formed by diamonds of different cuts and sizes. The briolette (elongated pear-shaped gemstones) are movable — at the slightest turn of the head they tremble and twinkle. The central stone of the diadem is a rare pale pink 13.35-carat diamond. 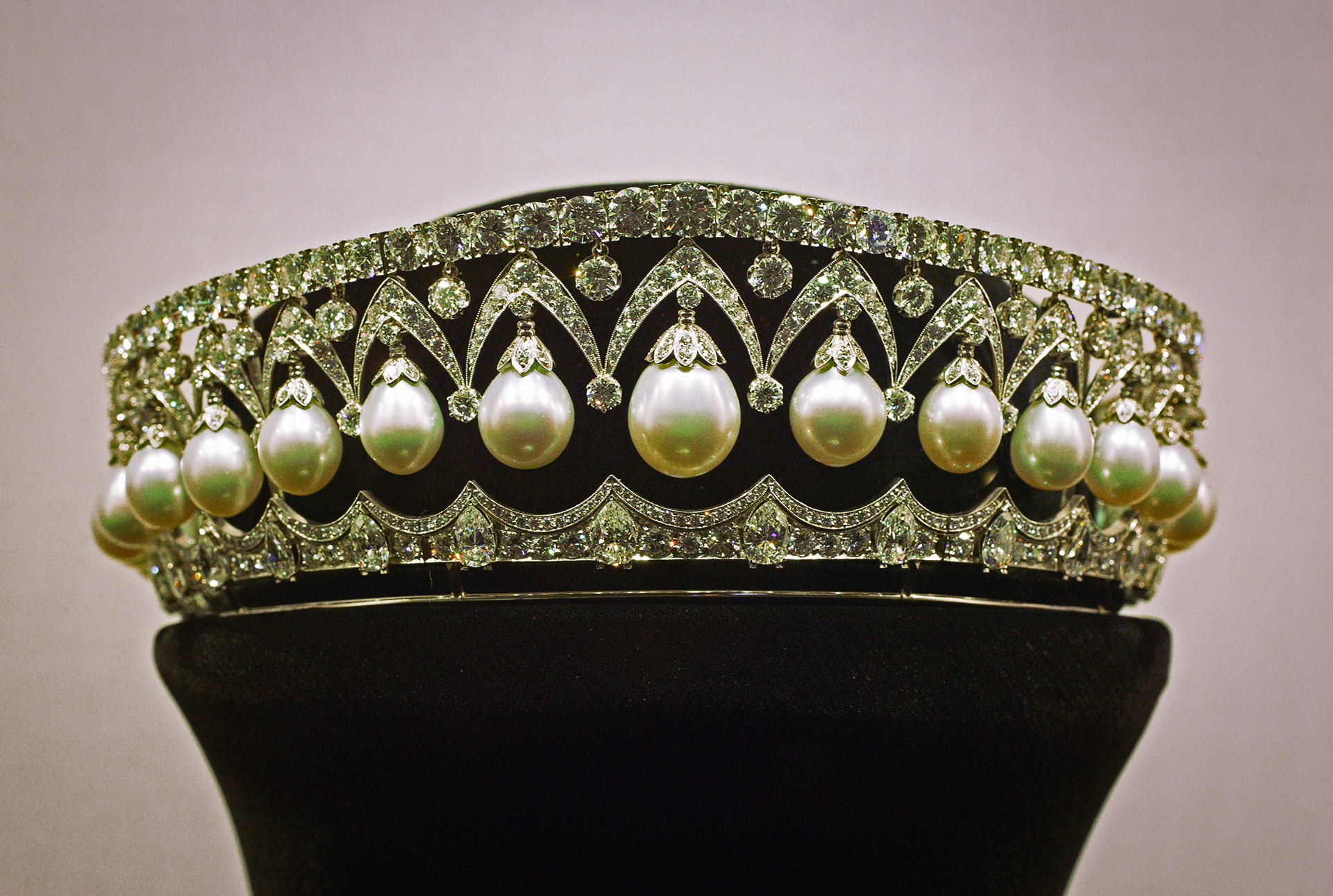 A stunning drop pearl and diamond tiara called “The Russian Beauty” has suffered a less fortunate fate. Made in 1842 by court Carl Bolin for Alexandra Feodorovna, the wife of Nicholas I, it was a favorite piece of Empress of Russia Marie Feodorovna, a Danish princess married to Tsar Alexander III of Russia. The diadem is so splendid that at some point the Empress kept it in her chambers. In 1919, after her son Nicholas II and his family were murdered, she fled the country (with only the jewelry she wore daily) and the tiara together with other precious items from the crown collection taken by the Bolsheviks.

As the story goes “The Russian Beauty” was sold at Christie’s in 1927 to Holmes & Co., who later sold it to the 9th Duke of Marlborough, who bought it for his second wife, Gladys. When she died in 1977, the tiara changed hands once again and ended up in the collection of the first lady of the Philippines — Imelda Marcos. After she and her husband fled to Hawaii in 1986, the tiara together the whole Marcos’ collection was confiscated by the authorities. It’s said it could resurface once again if the government of the Philippines decides to put the tiara up for auction or exhibit it. 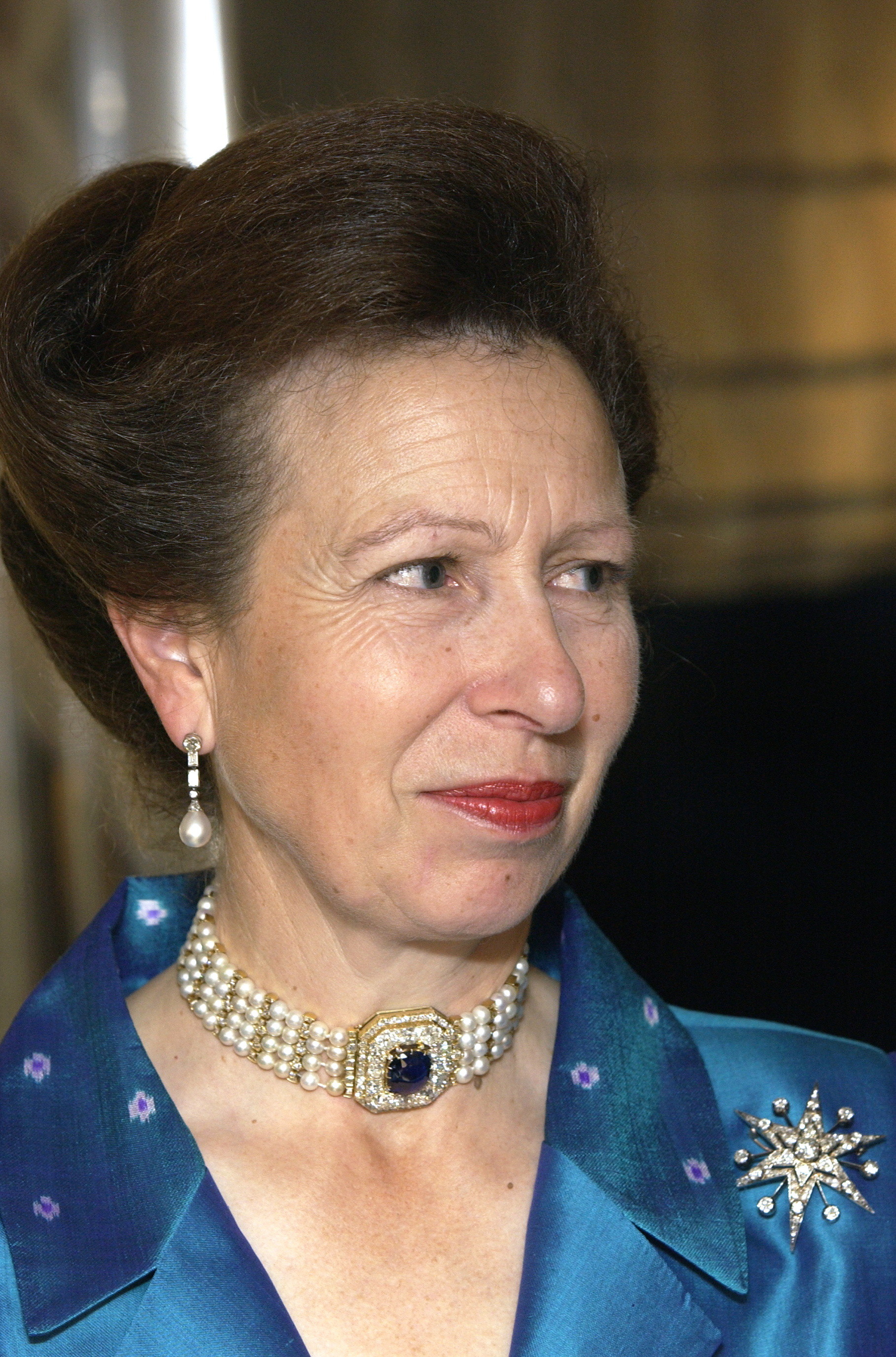 Anne, the Princess Royal, wearing the choker that supposedly came from the Marie Feodorovna's collection.

Another item from the collection of Marie Feodorovna supposedly ended up in the possession of the British royalty. The diamond and pearl choker with a geometric sapphire and diamond was sold at auction together with other pieces after Marie’s death. Allegedly, it was bought by Queen Mary and then after her death in 1953 it was inherited by Elizabeth II. The choker has often been worn by the Queen’s daughter Anne for special occasions like the 2011 gala held the night before Prince William’s wedding.

5. A sapphire brooch with a diamond bow 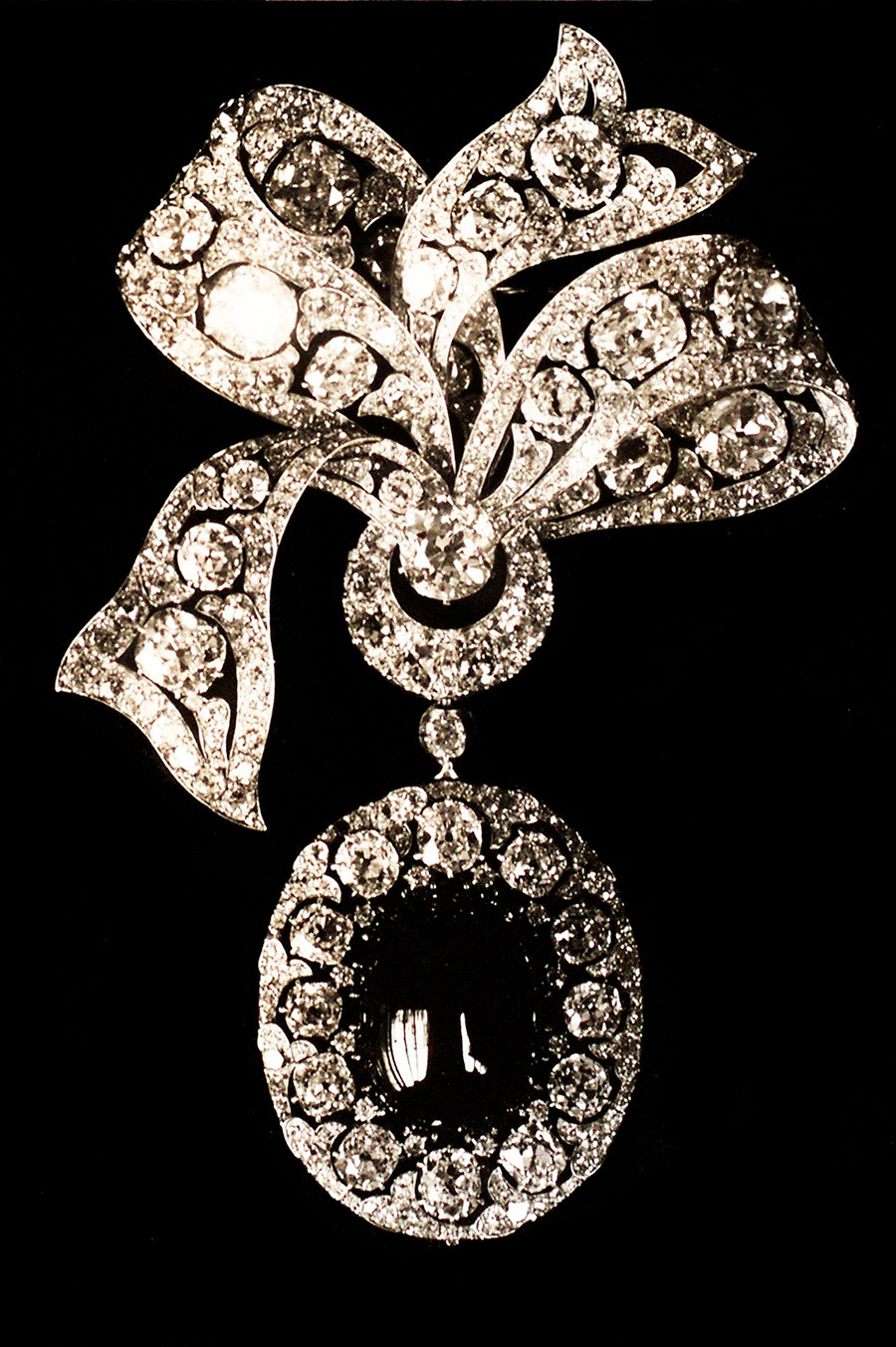 This large sapphire brooch was one of the four previously unknown Romanov jewels discovered a few years ago in the American USGS Library. Along with the brooch, researchers found photos of a sapphire and diamond tiara, a sapphire bracelet, and an emerald necklace — the photos appear in a 1922 “Russian Diamond Fund” album but are not included in the official documentation of the Russian Crown Jewels published in 1925. U.S. researchers determined that the sapphire brooch was sold in London in 1927 — what happened to it after and what happened to the other three pieces isn’t yet known.