‘Enemy at the Gates’ - How accurately was the Battle of Stalingrad portrayed in the film?

History
Alexey Timofeychev
Jean-Jacques Annaud/Paramount Pictures, 2001
Early February marks the 76th anniversary of the end of the Battle of Stalingrad, the largest military engagement in history. The Franco-American film, Enemy at the Gates, recreated those events and remains probably the best-known movie about the battle. How well does it match the historical record?

"Enemy at the Gates gets the look and feel of war right," commented Critics Consensus on Rotten Tomatoes, the film critics’ website. However, the love story “seems to be out of place” in this historic World War II blockbuster released in 2001. One can argue that this is a gross understatement because more than just the love story is out of place, according to many Russians who saw the movie

example, veterans living in the city of Volgograd (Stalingrad’s name since 1961) were shocked by the and demanded that it be banned. They complained that the Red Army’s image was distorted: commanders were portrayed as merciless despots, while rank and file soldiers were“voiceless cannon fodder.” The authorities, however, did not react to their appeal.

Even though time has passed, the movie remains one of the most popular western films about the Battle of Stalingrad. Millions of people form their understanding of this battle when watching it. So, who is right here from the point of view of historical accuracy - Critic Consensus, or the insulted veterans? Let’s address this question starting with the obvious: We are dealing here with a product of art and creative imagination (although director Jean-Jacques Annaud emphasized in an interview to Russian media that he diligently studied the circumstances of the battle).

The movie’s focal point is a duel between Soviet sniper Vasiliy Zaitsev (Jude Law) and his German counterpart, Major Erwin König (Ed Harris), which really took place during the Stalingrad battle, history’s bloodiest confrontation, drastically changing the course of World War II. The Red Army at first was desperately defending the city (summer-autumn of 1942), and then launched a counteroffensive, encircling hundreds of thousands of German troops (autumn 1942 – winter 1943) 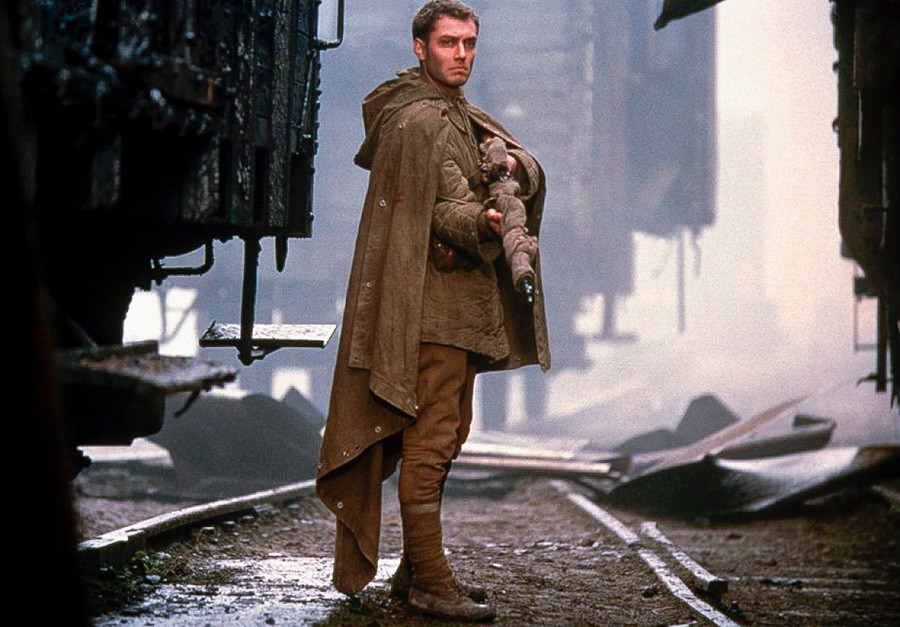 critical image of the Red Army is conveyed from the very beginning when the film shows new troops, among which is the main character, Zaitsev, arriving at the Stalingrad front. On their way they are screamed at, threatened and humiliated by commanders. They are transported in crowded boxcars like cattle and the cars are locked from the outside.  This is done, as one might guess, to stop soldiers from deserting. However, according to military historian Boris Yulin, this could not have taken place because it was forbidden. Indeed, in the case of a German air raid or shelling the men locked inside would be dead men.

After reaching the opposite bank, the soldiers are given weapons, but there aren’t enough rifles for everybody, so one soldier gets a rifle while another gets the ammunition for it. Soldiers are told to take the weapon from those killed in action. One doesn't have to be a historian or a specialist in warfare to understand that this makes no sense: none of the soldiers would be able to fight since one lacks a rifle and the other lacks ammunition. This means that Red Army commanders sent their soldiers to fight essentially without weapons 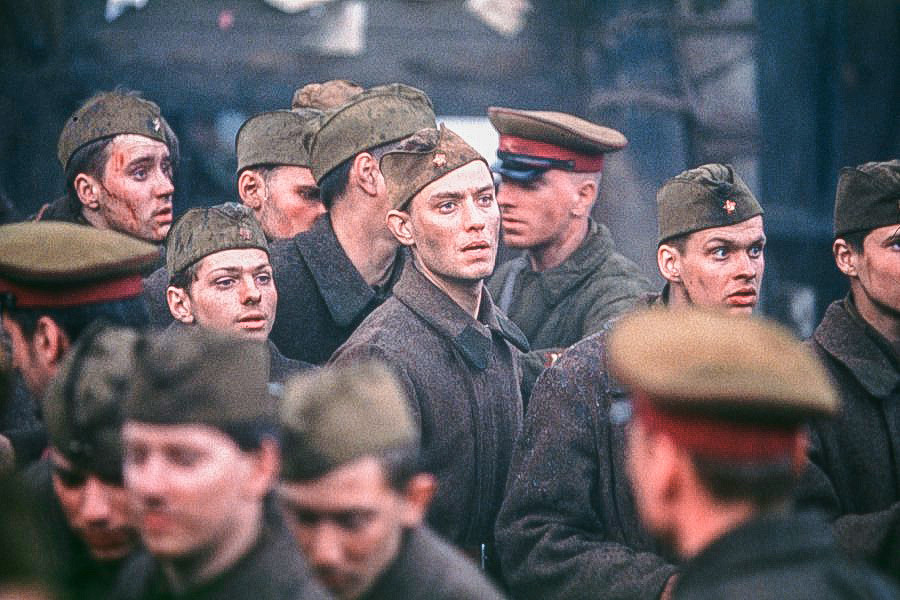 the situation with weapons truly so dire for the Soviets as portrayed in the movie? Historians point out that there were shortages of rifles, but that was in the early period of when due to heavy losses authorities had to form militia regiments that often were poorly armed. However, by autumn 1942 the situation had changed. “There were no unarmed soldiers sent to the attack… What is shown in Enemy at the Gates is pure nonsense,” confirmed historian Alexey Isaev, author of several books about the Battle of Stalingrad.

One of the film’s most vivid scenes is an attack by the newly-arrived Soviet troops against well-fortified German positions. The attack, which started a sports match with a whistle blow, quickly withers away, but when the troops start retreating they are machine-gunned by a punitive detachment. It makes one wonder: Who killed more Soviet soldiers - the Germans or Soviet brothers-in-arms.

Such punitive regiments did exist in the Red Army, and indeed they were charged with stopping panic in the ranks and to prevent unauthorized retreats with force. 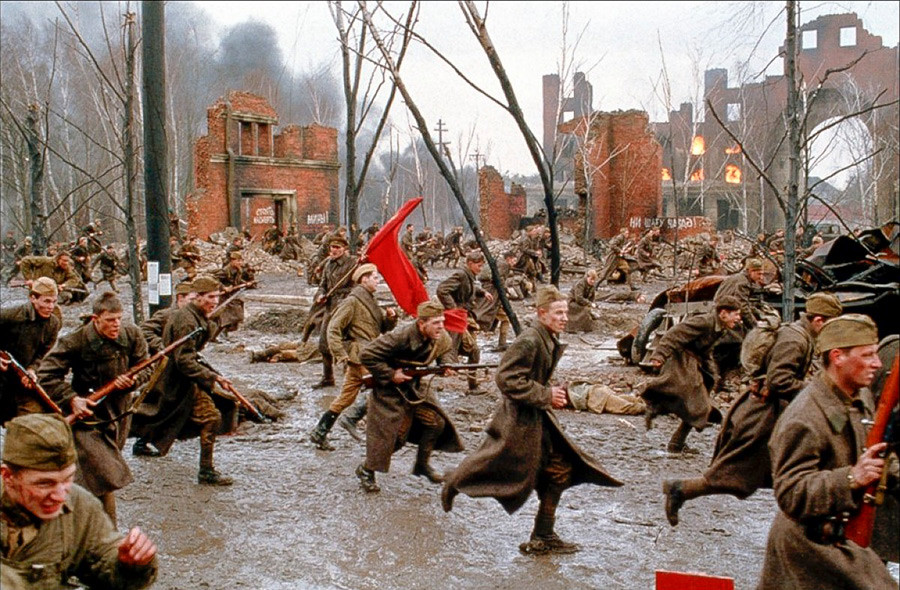 The attack started like a sports match with a whistle blow

However, Stalin’s infamous order No 227, "Not a step back!", which  the use of these regiments on a large scale, stipulated that there should be up to five such detachments (consisting of 200 soldiers each) per army formation (more than 50,000 people).

There is also plenty of data about what these regiments did. From Aug. 1 to Oct. 15, 1942, the detachments detained 140,775 people who left their positions (these were not only deserters but also soldiers fighting their way out of encirclement). The majority were sent back to the army (131,000) whilst 3,900 were arrested and 1,189 shot (less than 1%).

Alexey Isaev points out that in the conditions of urban warfare the punitive detachments could hardly be used effectively, and so “their role was minimal”. “Most often they were used [in Stalingrad] as usual combat regiments.” However, it seems that such scenes are made to emphasize the main message – “most Soviet soldiers needed a literal gun in the back in order to go into battle” to use the words of a blogger.

This, however, it’s not the way Russians have been brought up to think about the Battle of Stalingrad, where there were many cases of true heroism and sacrifice. Due to the fact that such bravery was very common, it’s highly unlikely that Soviet soldiers were motivated by fear.