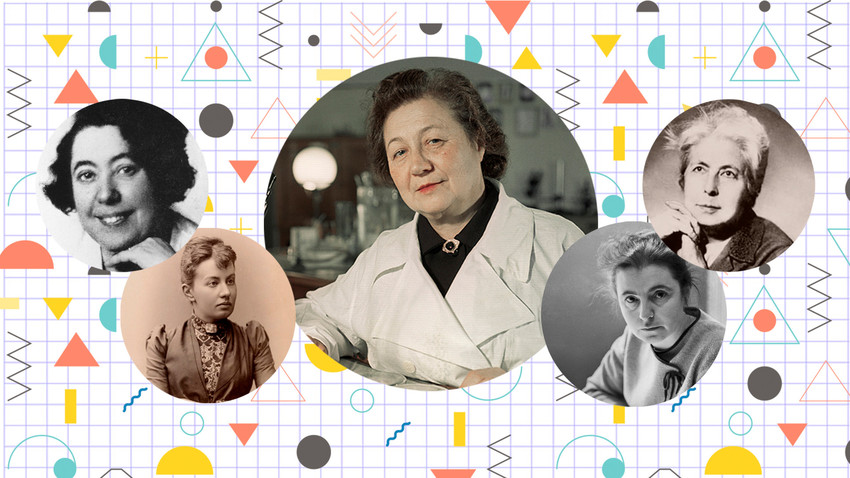 David Sholomovich/Sputnik, Getty Images, Vasiliy Fedoseyev/TASS, Images from the History of Medicine (NLM), archive
From the invention of the first Russian antibiotic to the first fluorescent lamps, these women have left their mark on the history of Russian science.

Nowadays you can meet female scientists all over the world and it won’t come as a surprise to anyone. Only this spring, on March 19 to be exact, the prestigious Abel Prize for mathematics was awarded to a woman for the first time.

The first higher education courses for women started appearing in Russia about the same time as in Europe, in the 1870s, but the right of women to have an equal education with men was only fully realized in the 1920s. Despite this, the examples of scientists such as Zinaida Yermolyeva, Sofia Kovalevskaya, Lina Stern, Olga Ladyzhenskaya and Fatima Butaeva show that even in the most difficult times, women's aspirations in science found ways through. 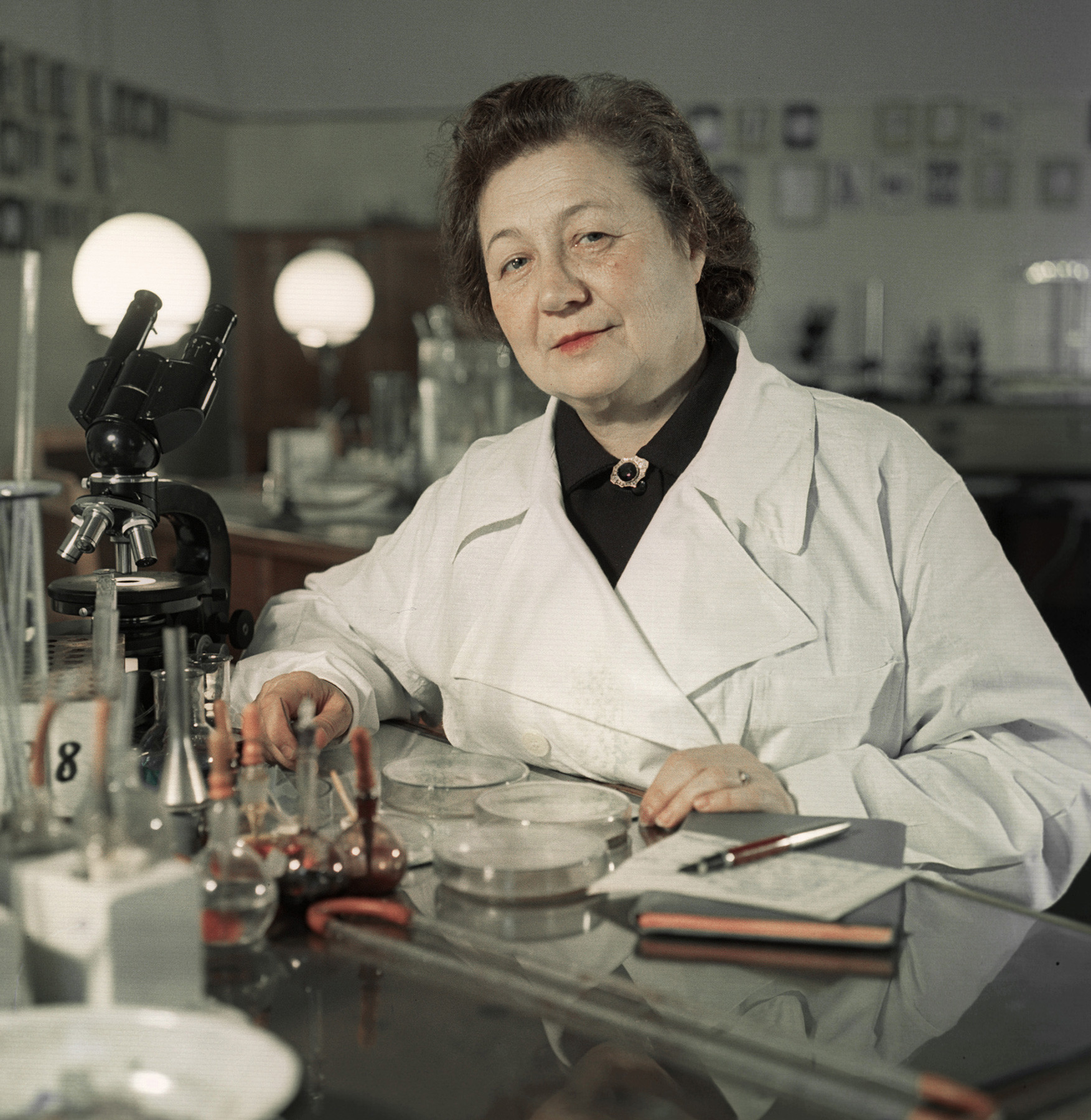 One of the founders of Russian microbiology, Zinaida Vissarionovna Yermolyeva (1898-1974) didn't choose her profession by accident. In 1915, she decided to become a doctor after learning that her favorite composer, Pyotr Tchaikovsky, had died of cholera. Zinaida decided to devote her life to fighting the disease and entered Donskoy State University from which she graduated in 1921.

During a 1922 cholera epidemic, Zinaida almost died after she conducted an experiment on herself: Researching ways of contracting the infection she deliberately drank water containing choleroid vibrios. Thanks to her bold and life-threatening experiment, modern standards of water chlorination were created.

In 1939, she was sent to work in Afghanistan where she invented methods for the rapid diagnosis of cholera and an effective drug, not only against but also against typhoid fever and diphtheria. And during World War II, Zinaida succeeded in preventing the spread of a cholera epidemic at Stalingrad. The disease broke out among German troops and posed a threat to city residents and the Soviet army, but thanks to Yermolyeva, the production of bacteriophage was launched and mass vaccinations and chlorination of wells were carried out, measures that helped stop the epidemic.

One of the major achievements of the Soviet microbiologist was the development of the first Russian antibiotic, , which was similar to penicillin. The creator of penicillin, Howard Florey, who visited the USSR with a delegation in 1944, compared the two antibiotics. It turned out that worse than but actually more effective. Florey was so impressed that he nicknamed Yermolyeva " Penicillin". 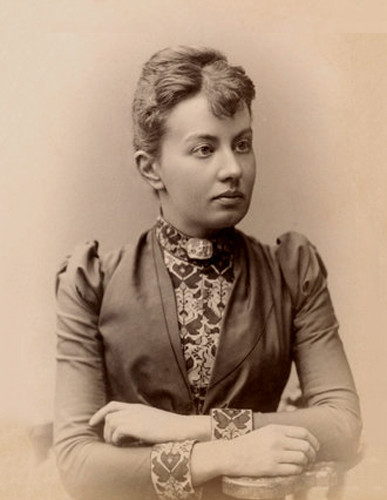 first female professor in the world and the first woman mathematician in Russia, Sofia Vasilyevna Kovalevskaya, also known as Sophie Kowalevski, (1850-1891) was introduced to mathematics in early childhood. According to legend, owing to a shortage of wallpaper, the walls of her nursery were covered with pages from lecture notes by mathematician Mikhail Ostrogradsky about differential and integral calculus. She received her first lessons from a tutor at but managed to get higher education only abroad. At the time, women didn't have access to education, so Sofia arranged a fake marriage and left with her young scientist husband for Germany. There, she attended lectures first at Heidelberg University and then at Berlin University, and in 1874 was awarded a doctorate in philosophy at the University of Göttingen.

After her husband's suicide in 1883, Sofia went with her daughter to Berlin. She secured a professorship at Stockholm University, where she read lectures and published work in Swedish. In 1888, the first woman professor wrote a work on ‘The Rotation of a Rigid Body about a Fixed Point’ in which she discovered the third classic way of solving the problem, moving forward the work started by Leonhard Euler and Joseph-Louis Lagrange.

3. Lina Stern, the first woman academician in the USSR 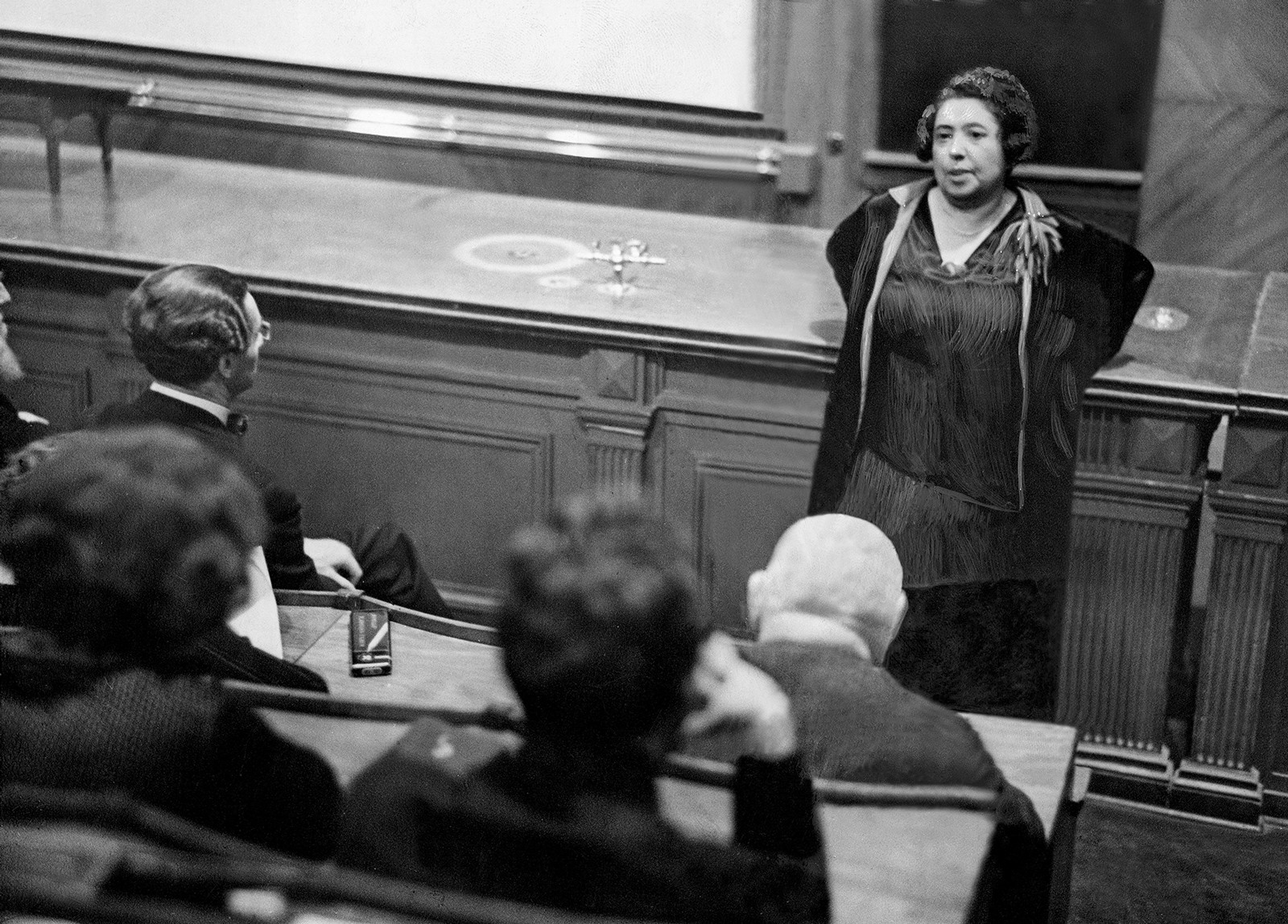 The eldest child in a large Jewish family, Lina Solomonovna Stern (1878-1968) was born in the Courland Province (now Latvia) of the Russian Empire. She was the first woman awarded the title of professor at the University of Geneva, where she had studied, later becoming the first female academician in the USSR, to which she returned in 1925, having been offered the position of head of the Department of Physiology at the Second Moscow State University (since 1930 - the 2nd Moscow Medical Institute).

An incredibly energetic and hard-working woman, from 1925 to 1949 Lina Solomonovna was the head of the Department of Physiology and simultaneously (1929-1948) director of the Institute of Physiology of the People's Commissariat for Education of the RSFSR (later - the USSR Academy of Sciences). In 1932, Stern was elected a member of the German Academy of Natural Sciences and, in 1939, an academician of the USSR Academy of Sciences. The main focus of her research was the study of the chemical and principles governing physiological processes in humans and animals. She introduced the term "hemato-encephalic barrier" - a mechanism that selectively regulates the movement of substances between the blood and the central nervous system, and performs a protective function in the body.

Under her leadership, an electro-impulse method for halting the ventricular fibrillation of the heart was developed and the first cardiac electrotherapy device created. A method of treating wound shock, which went on to be widely applied in military hospitals during World War II, came out of the work done by Stern. And in 1947, she proposed an effective method for treating tuberculous meningitis by introducing streptomycin into the cerebrospinal fluid directly through the cranium.

Science once saved Stern’s life: in 1949 she was arrested over the Jewish Anti-Fascist Committee but was the only one to avoid being shot, telling the court that she didn’t want to die as she had not yet done everything she was capable of for science. Nevertheless, Stern was deported to Kazakhstan, where she spent the next few years, until 1953. On her return to Moscow, she headed the Department of Physiology at the Russian Academy of Sciences Institute of Theoretical and Experimental Biophysics. 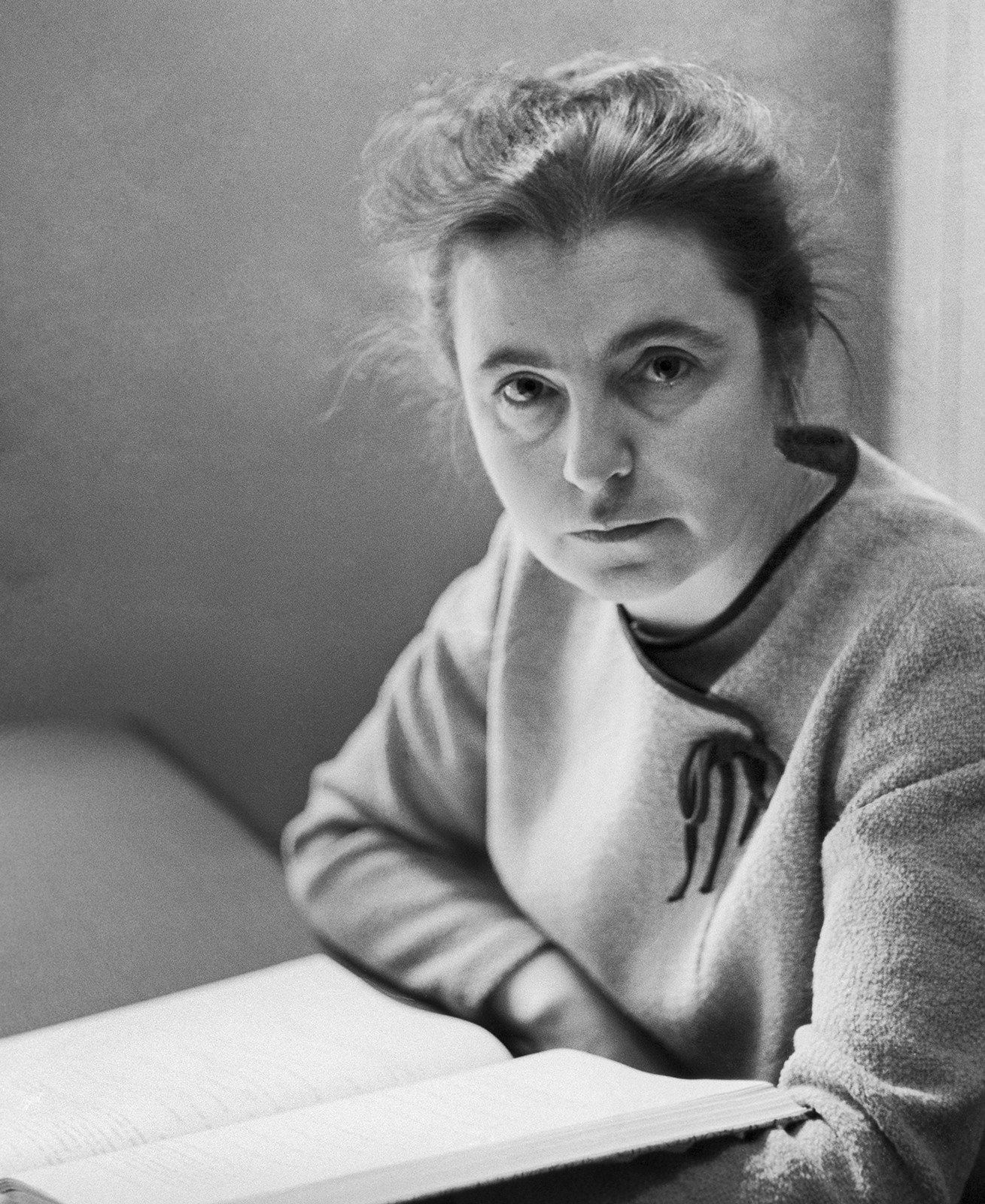 outstanding mathematician Olga Alexandrovna Ladyzhenskaya (1922-2004) was born in the small town of Kologriv in the Kostroma Region. Her father, Alexander Ivanovich - a school mathematics teacher and former officer in the Tsarist army - instilled in his daughter a love for his subject at an early age (at 10, she was already solving advanced math problems with ease), but her path to an academic career was not an easy one. Her father was purged in and shot soon , and the stigma of being the ‘daughter of an enemy of the people’ hindered Olga in her efforts to enter the Faculty of Mathematics and Mechanics of Leningrad University (LGU).

She eventually managed to enter the Faculty of Mechanics and Mathematics of Moscow State University (MGU) in 1943, and in 1947 she commenced postgraduate studies at LGU, where she subsequently earned a doctorate in Physical and Mathematical Sciences and became a professor of the Department of Higher Mathematics and Mathematical Physics at LGU’s Faculty of Physics. Known for her austere , intellectual curiosity and outspokenness, Ladyzhenskaya was the author of more than 200 works dealing with a broad range of problems relating to the theory of partial differential equations. For instance, her work on fluid dynamics has assisted research into the movement of ships and torpedoes, of blood inside blood vessels and liquids in pumps.

Like her father, Olga had wide interests and loved not only the sciences but also , poetry, and music. She counted many cultural figures among her friends. One of them was Anna Akhmatova, and Olga was one of a select circle to whom the poetess entrusted her verses in the years of repression. She was also one of the 257 ‘Witnesses of the Archipelago’, whose narratives, letters, memoirs, and clarifications were used by Alexander Solzhenitsyn when he was working on ‘The Gulag Archipelago’. 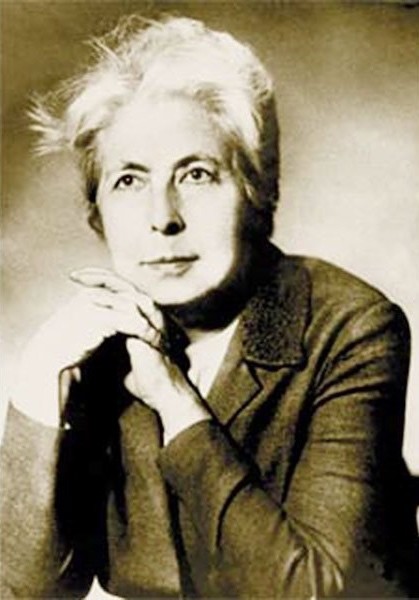 in a small town in Ossetia, where few could even write, Fatima Aslanbekovna Butaeva (1907-1992) started her career as a teacher of mathematics in Kuybyshev immediately after graduating from the Second Moscow State University in 1932. Fatima returned to Moscow in the same year and spent two years teaching theoretical mechanics at the Technical School of the Metrostroy Training Centre. In 1934, she went to work at the light source laboratory of the All-Union Electrotechnical Institute (), first as an engineer and subsequently as head of .

As a result of her research, Fatima became famous as the co-inventor of the first fluorescent lamps, for which she was awarded the Stalin Prize, Second Degree, in 1951. In the same year, Butaeva and her colleagues applied for a patent for a new principle for light amplification, which is today applied in all lasers. The discovery was ahead of its time and the patent was only granted eight years when it was eventually entered in the USSR State Register of Scientific Discoveries.