The truth about Anatoly Dyatlov, the man blamed for Chernobyl 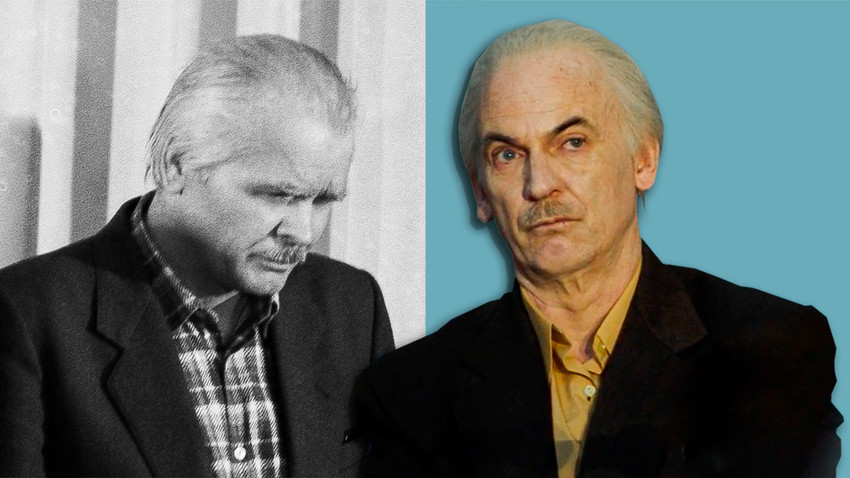 Vladimir Samokhotsky/TASS; HBO
The deputy chief engineer of the Chernobyl Nuclear Power Plant was in control on the night of April 26, 1986. But how true was his portrayal on the show? It's hard to tell without hearing his own story and exploring his take on the tragedy.

An unlikable, authoritarian, and criminally negligent man who willfully turns a blind eye to reality - this is how Anatoly Dyatlov, deputy chief engineer at the Chernobyl Nuclear Power Plant, appears in the recent HBO mini-series Chernobyl. He swears, yells, humiliates junior staff and strikingly neglects every safety procedure, which eventually leads to the explosion of the nuclear reactor - costing God knows how many lives.

He’s one of the most hated characters on the show, but was Dyatlov as horrible a person as he’s portrayed? What was his background and what happened to him after he was sentenced to prison?

A competent, but tough boss 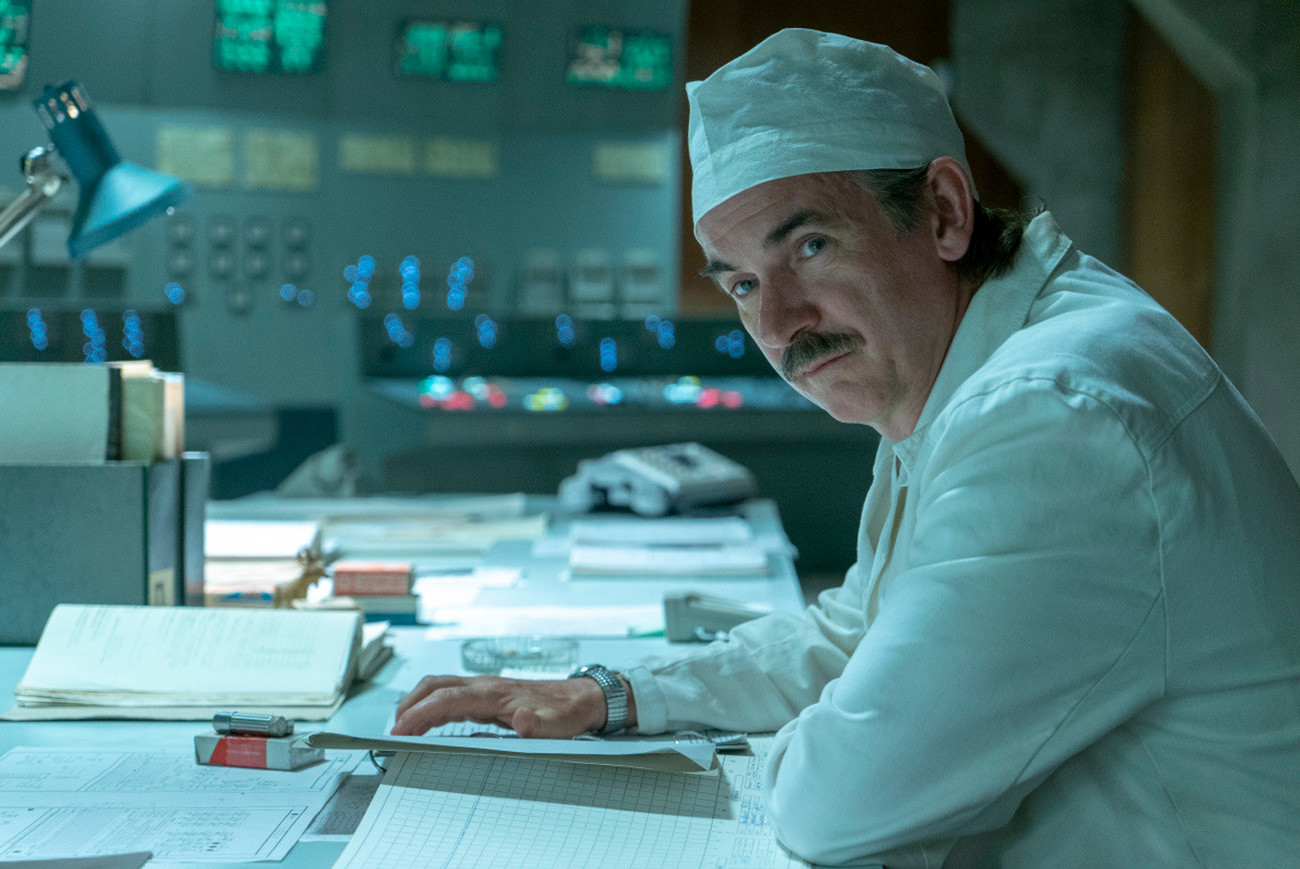 Born in 1931 in a small village of Atamanovo in Russia’s Krasnoyarsk region, Anatoly finished just seven years of school. In 1945, he enrolled in the electrical engineering department of the Norilsk Mining and Metallurgical Technical School and graduated with honors five years later. After three years working in Norilsk, he was admitted in Moscow Engineering Physics Institute where he received an engineer-physicist degree with a specialty in automation and electronics - also with honors.

He was allocated a position at a shipyard in Komsomolsk-on-Amur where he worked in classified lab No. 23 equipping nuclear submarines with nuclear reactors. In 1973, due to family reasons, Dyatlov was transferred to newly built Chernobyl Nuclear Power Plant and worked there for 13 years - climbing up from deputy head of the reactor hall to deputy chief exploitation engineer and receiving two state awards (the Order of the Badge of Honour and the Order of the Red Banner of Labour).

As those who worked with him recalled, Dyatlov was a competent professional, but often too tough and demanding. While some remember him as unfair, stubborn, slow minded and prone to conflicts with other people, others say that he was a responsible, principled, honest, and devoted man. The following opinions present how polar-opposite views on him were.

“Dyatlov wasn’t passionate about the work, even though he acted like a stern and demanding boss,” Razim Davletbayev, an employee at the Chernobyl NPP recalled (in Russian). “Operators (of the plant) didn’t respect him. He used to reject all suggestions and objections that required his efforts.”

“He could understand if the staff made mistakes due to explainable reasons, but he totally couldn’t tolerate carelessness, incompetence and the neglect of their duties,” recalled (in Russian) Anatoly Kryat, a state inspector on nuclear safety of Ukraine. 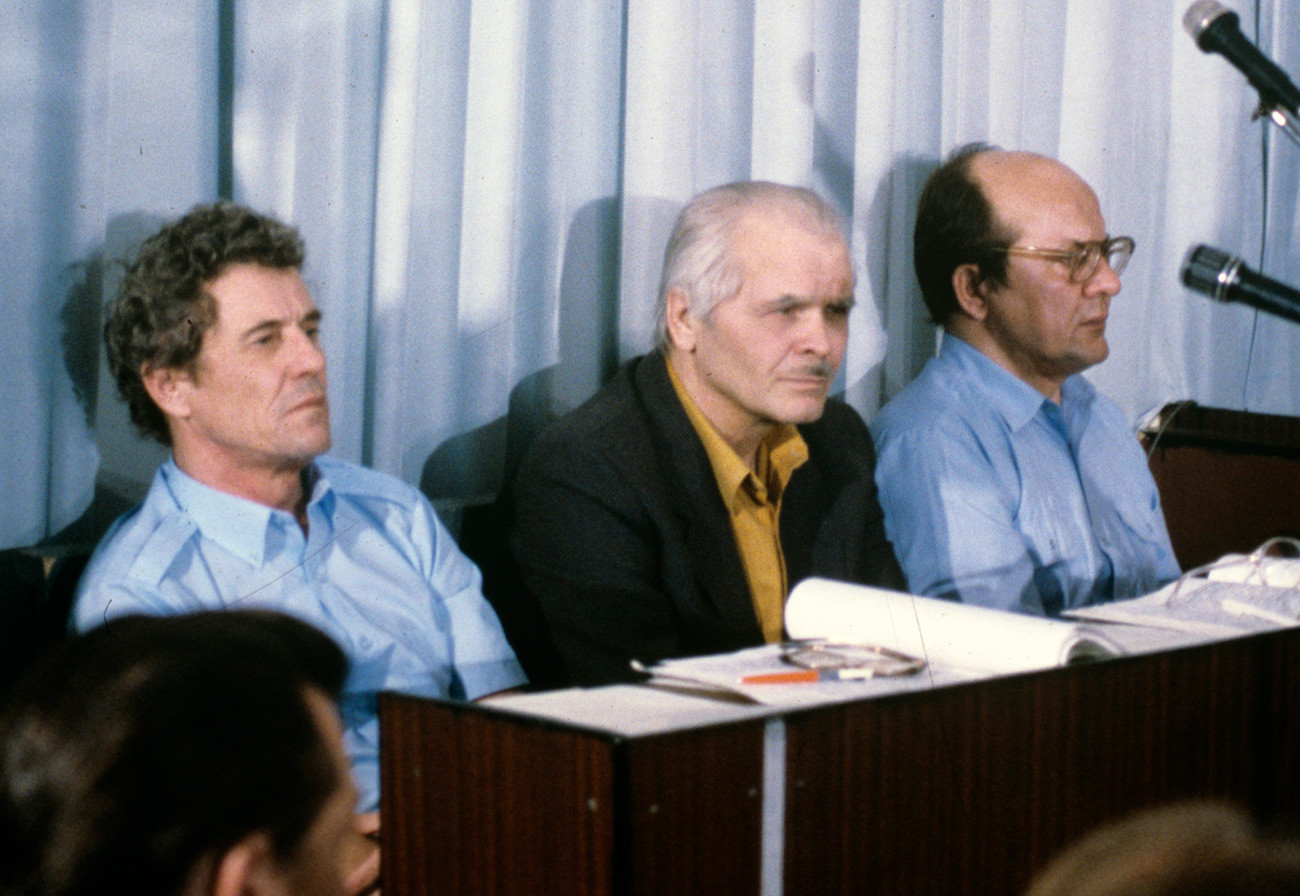 (From the left) The director of the NPP Viktor Brukhanov, Anatoly Dyatlov, and chief engineer Nikolay Fomin facing the court trial.

In his own book, ‘Chernobyl: How it happened’ (Chernobyl: Kak eto bylo), Dyatlov himself argued that he wasn’t the worst of bosses. “I never sought to be loved by my juniors or by my seniors. I think that it’s enough to be competent and fair to ensure normal working relationships. In any case, none of my staff ever quit because it was impossible to work with me. I could have been too tough sometimes, but nothing more. Indeed, I was demanding,” he wrote (in Russian).

On the day of the tragedy, work had been going on as usual and it was a total surprise for the staff, including for Dyatlov, when they heard an explosion. In an effort to complete a scheduled test (which was unsuccessfully tried a few times already), the operators tried shutting down the fourth reactor, but the heat inside the reactor instead rose dramatically. The operators pushed the emergency button to stop the reactor, but it exploded instead. “That was it, a total catastrophe, that could happen in an energy reactor,” Dyatlov recalled in his book.

Refusing to believe the reactor had exploded at first, he ordered water to be pumped to the reactor to cool it down and, being in shock, sent two staff members to lower the rods manually - a decision that Dyatlov later admitted was absurd. “If the rods do not go into the zone when the clutches are de-energized, then they will not go when rotating manually,” he explained.

According to other accounts of the night of tragedy, Dyatlov acted anxiously, constantly yelling at junior staff, and didn’t want to believe that an explosion had occurred in the reactor. Pretty much how Dyatlov has been portrayed by the HBO. 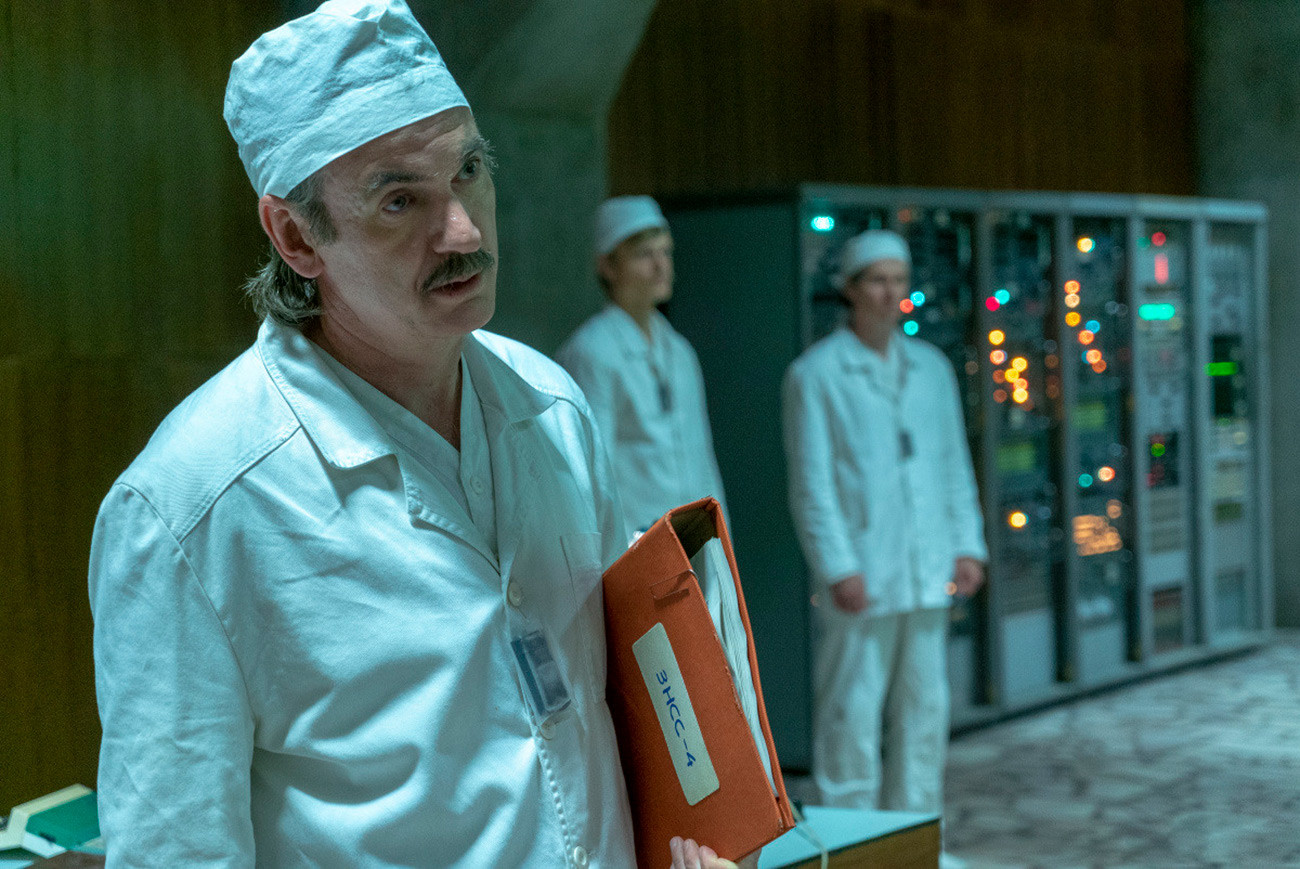 Then, followed a meeting with the director of the NPP Viktor Brukhanov, a confirmation that the reactor had indeed exploded, the first signs of Dyatlov’s radiation exposure (continuous vomiting) appeared and he was evacuated to a hospital in Moscow. On that fateful night, he was exposed to 390 REM (Roentgen Equivalent Man) of radiation and had to learn to walk again once the radiation wounds on his legs had healed.

Together with others held responsible for the disaster (Brukhanov and chief engineer of the NPP Nikolay Fomin), Dyatlov faced the court and was sentenced to 10 years in prison, despite his sickness. Dyatlov said he examined every step they made that night and was fully certain that his responsibility in the tragedy was only partial. 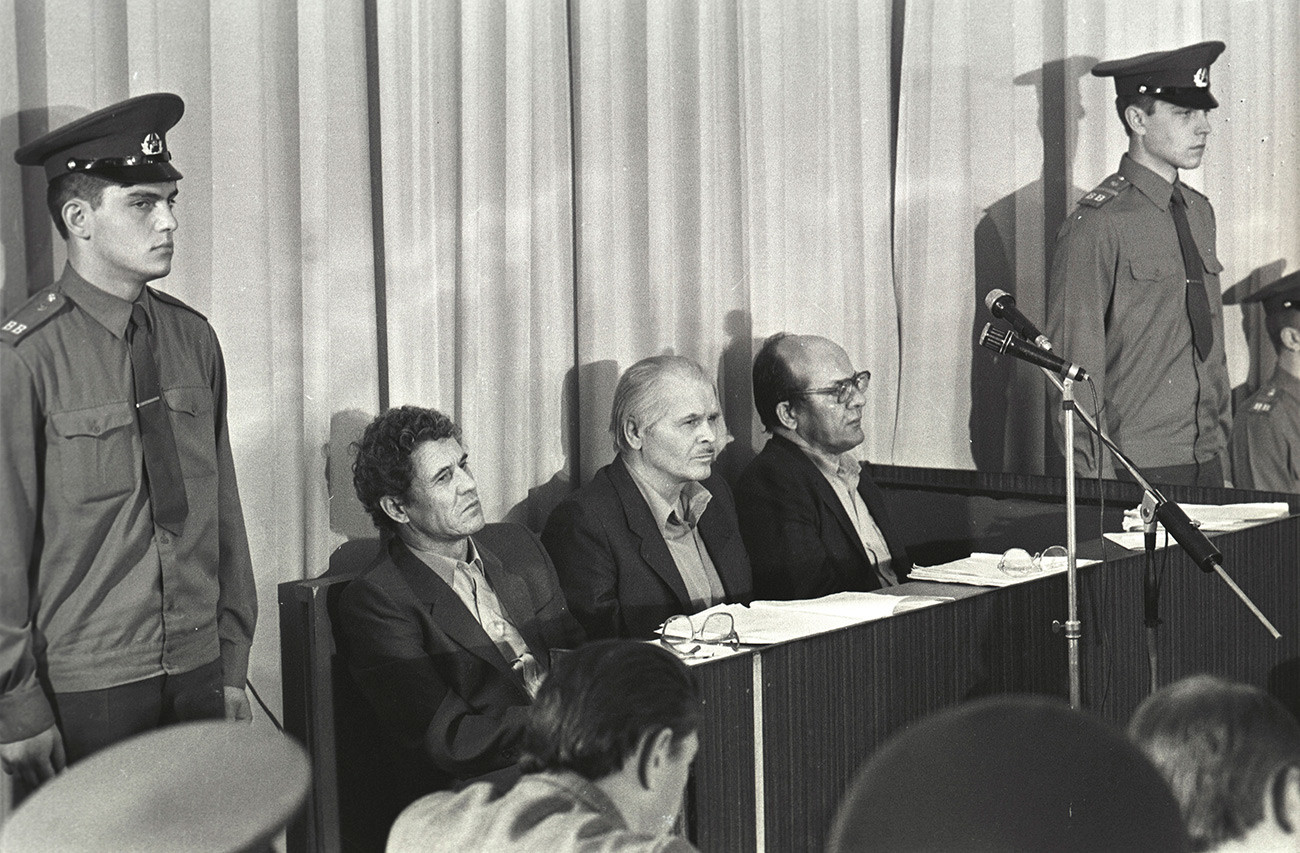 (From the left) The director of the NPP Viktor Brukhanov, Anatoly Dyatlov, and chief engineer Nikolay Fomin facing the court trial.

“The reactor didn’t comply with more than 30 standard design requirements - more than enough for an explosion. To explain it another way: before protection was lifted, the reactor was reaching a nuclear bomb-like state and there was no alarm signal. How could the staff learn about it - by smell, by touch?” he argued in his book. “Before talking about the fault of the staff, just think about it - the reactor was detonated by its emergency system.”

Despite his sickness and disability, Dyatlov served time in jail, first in Kiev and then in the Poltava region in Ukraine. After four years and constant official letters, including those from Russian nuclear physicist Andrei Sakharov and Dyatlov’s wife, in 1990, Anatoly got released due to his poor health. He underwent medical treatment in Germany, but suffered a lot and died in 1995 as a result of heart failure provoked by radiation. 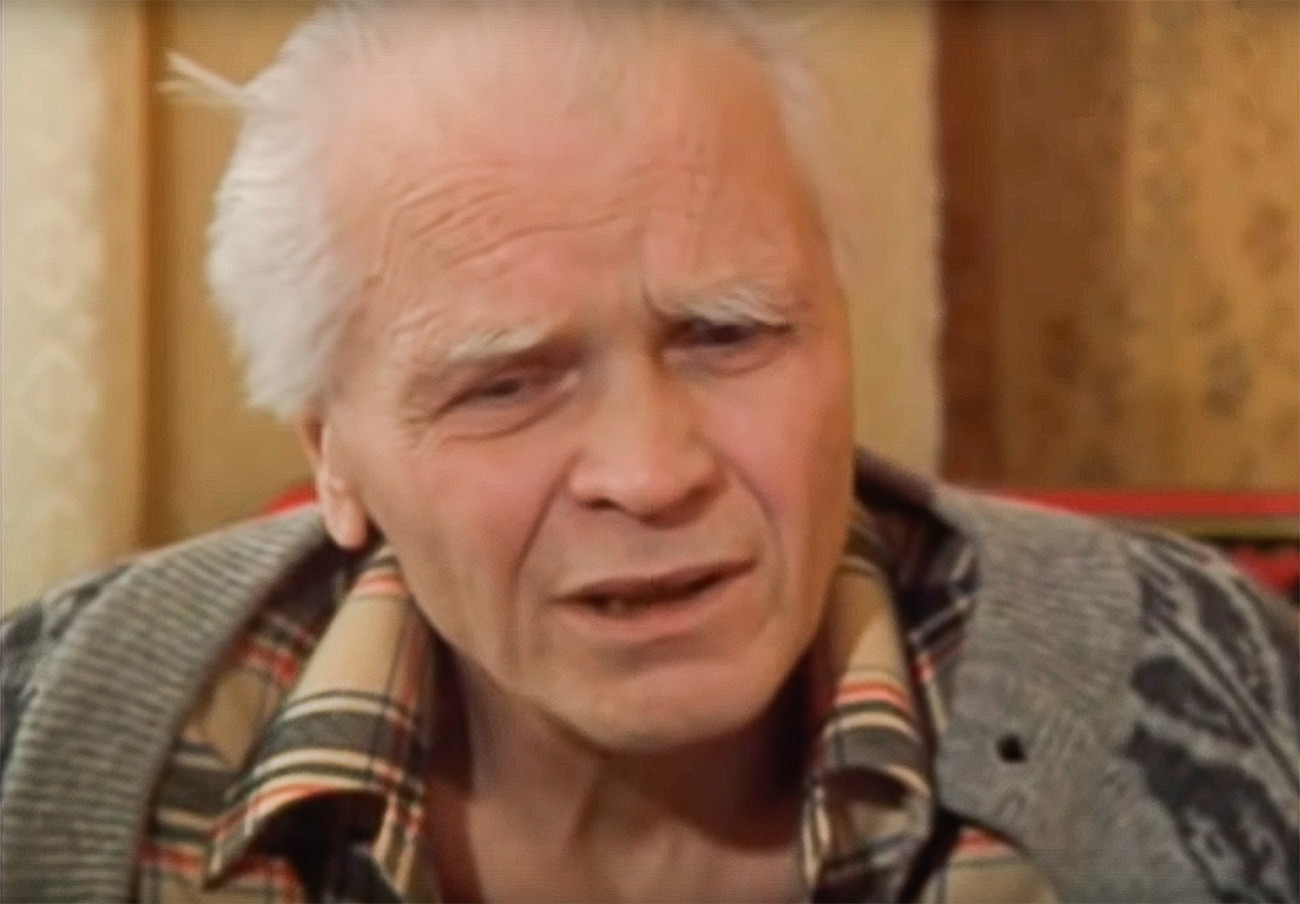 Until his death, Dyatlov continued to blame the design flaws for the tragedy and argued that the Soviet Union simply couldn’t admit the responsibility for this and, thus, blamed the people who had to work on faulty equipment. To prove his point, he gave an interview in 1994 (video available on YouTube) and wrote a book (in Russian).

There are many conflicting views on Dyatlov’s personality, and it’s up to the individual to choose how to remember him. But it was officially admitted later that the defects of the NPP did play a role and it wasn’t only Dyatlov’s mistake.