What was the most bitter Russian-British war? 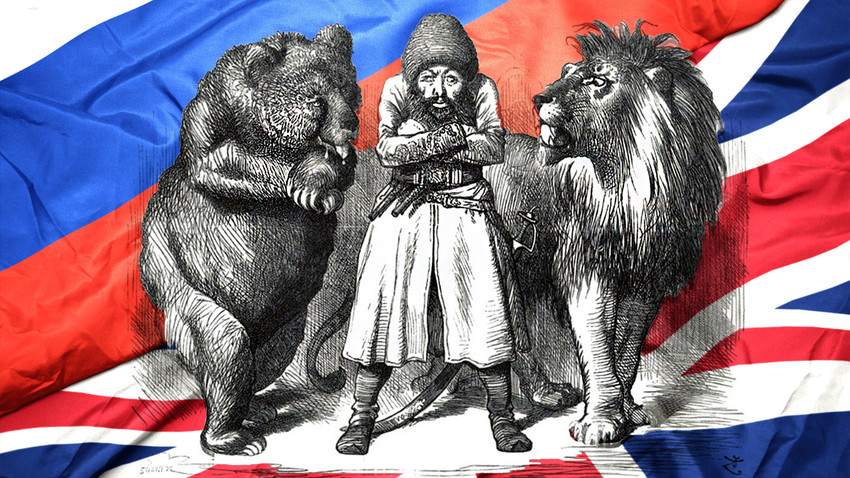 Legion Media, Sir John Tenniel
For centuries the Russian and British empires were implacable rivals and enemies. Surprisingly, they rarely met each other on the battlefield, preferring to lead proxy wars. 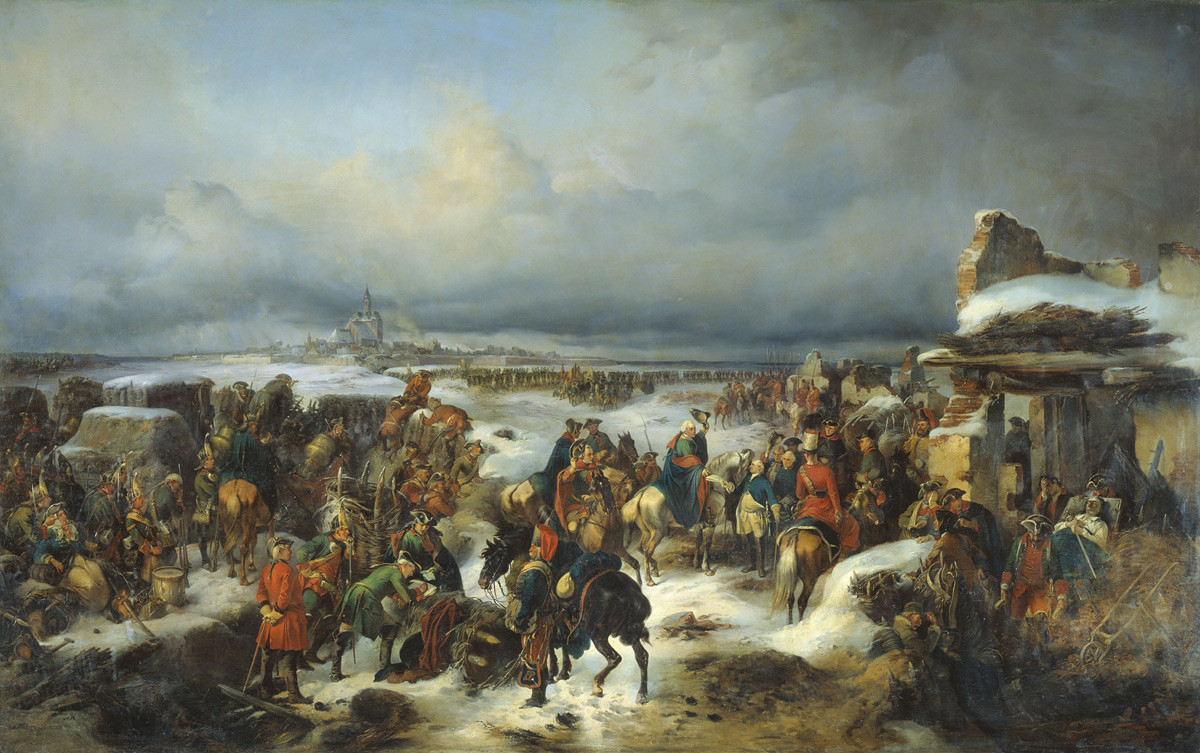 The fall of fortress Kolberg in 1761 (Seven Years' War) to Russian troops.

Confronting each other in one of the bloodiest wars of the 18th century, Russia and Great Britain, however, never actually met on the battlefield in the process. While the British fought their traditional rival France on land and sea, their ally, the Prussian king Frederick the Great, dealt with the Russians and Austrians.

When the exhausted Prussia was on the brink of collapse in 1761, the so-called “Miracle of the House of Brandenburg” occurred. The deceased Empress Elizabeth of Russia was succeeded by Peter III, a native German and a big admirer of Frederick. He immediately made peace with the Prussians and returned them the conquered East Prussia, reducing all Russia’s successes to zero.

Despite the fact that Peter III was soon overthrown, the war for Russia was over. Losing over 130,000 soldiers, it got nothing in return, except for high military prestige. The United Kingdom, for its part, after defeating France and seizing its vast territories in North America, turned into the greatest colonial superpower. 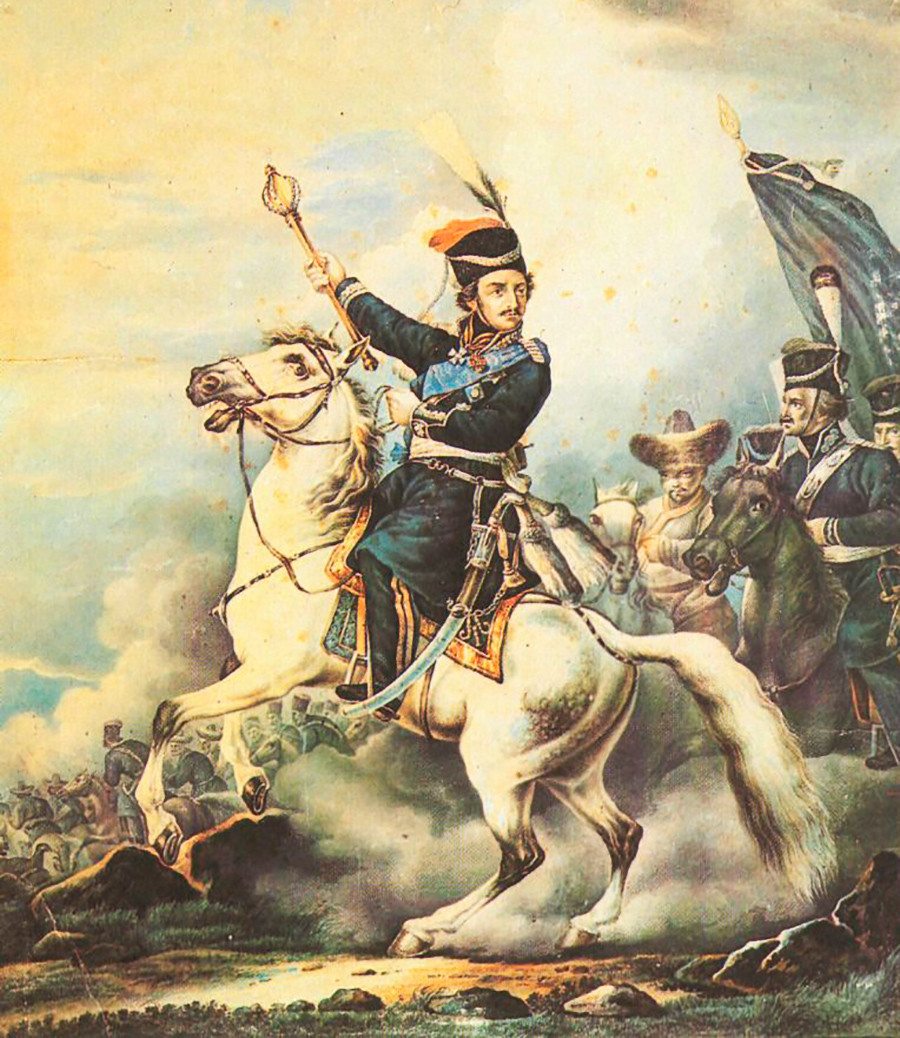 The joint long-term Russian-British fight against Napoleon and revolutionary France was interrupted in 1800 because of tiny Malta. Having liberated the island from the French, the British kept it for themselves instead of returning it to the Knights of Malta.

Russian Emperor Paul I, who was Grand Master of the order, took this as a personal insult. Dramatically changing the course of his foreign policy, he befriended the former enemy, Napoleon, and together with the French ruler planned a joint campaign into India, the British Empire’s main source of wealth.

22,000 Cossacks were sent towards India, while a joint 70,000 Russian-French army, commanded by André Masséna, was due to follow. However, on March 23, 1801, Paul I was murdered as a result of court intrigue in which Britain played an active role. The new ruler, Alexander I, recalled the Cossacks and immediately restored allied ties with the British. 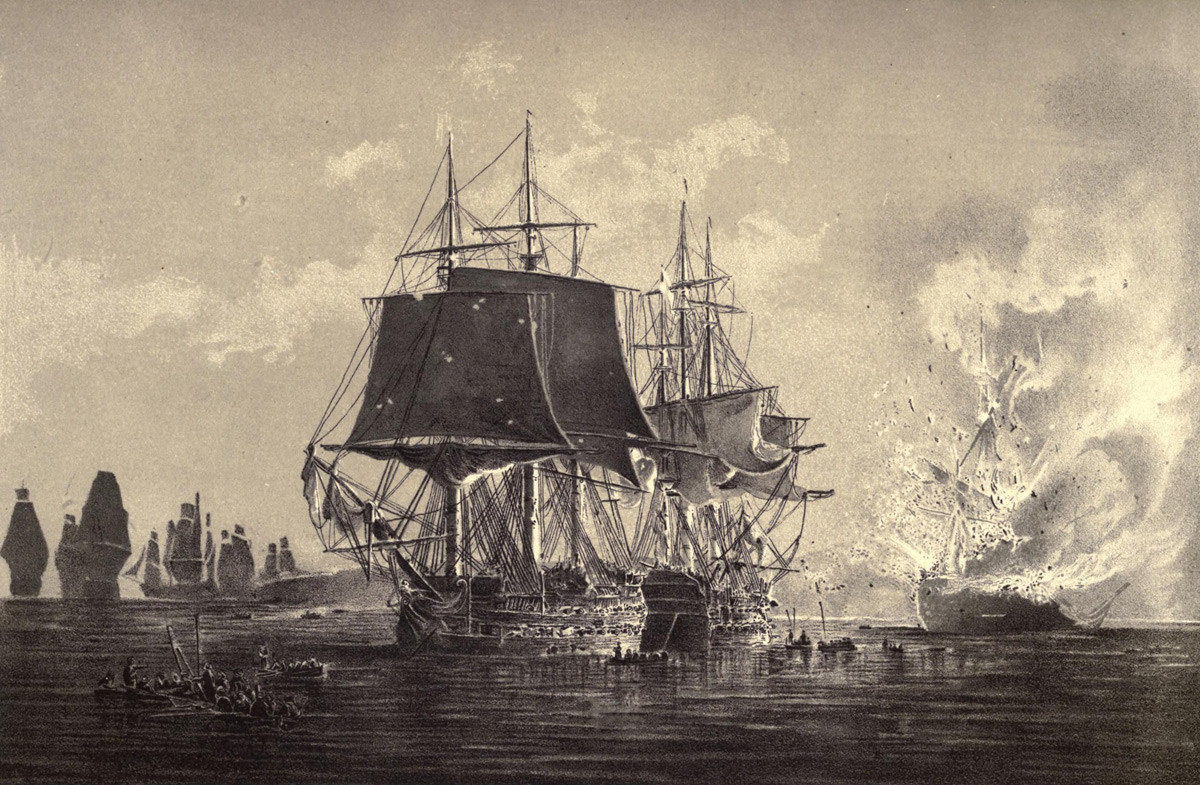 The Russian Ship Vsevolod, after the action with the Implacable, destroyed in the presence of the Russian Fleet. Rogerwick bay 1808.

When on June 14, 1807, Napoleon defeated the Russian army in the Battle of Friedland, Emperor Alexander I was forced to conclude a peace treaty with the French and join the Continental Blockade, aimed at paralyzing British commerce.

For several years the former allies waged a naval war in the Baltic and White seas. The British attacked and captured enemy merchant and warships, pillaged Russia’s coast, and tried to blockade its ports. The confrontation never led to large-scaled naval battles, being limited to isolated duels.

The hostilities peaked during the war between Russia and Britain-supported Sweden, which lost Finland as a result. Since 1811, the Russians and British had been in secret negotiations on lifting the blockade, so detrimental to both of them. With Napoleon's invasion of Russia in 1812, this unnecessary war was finally over. 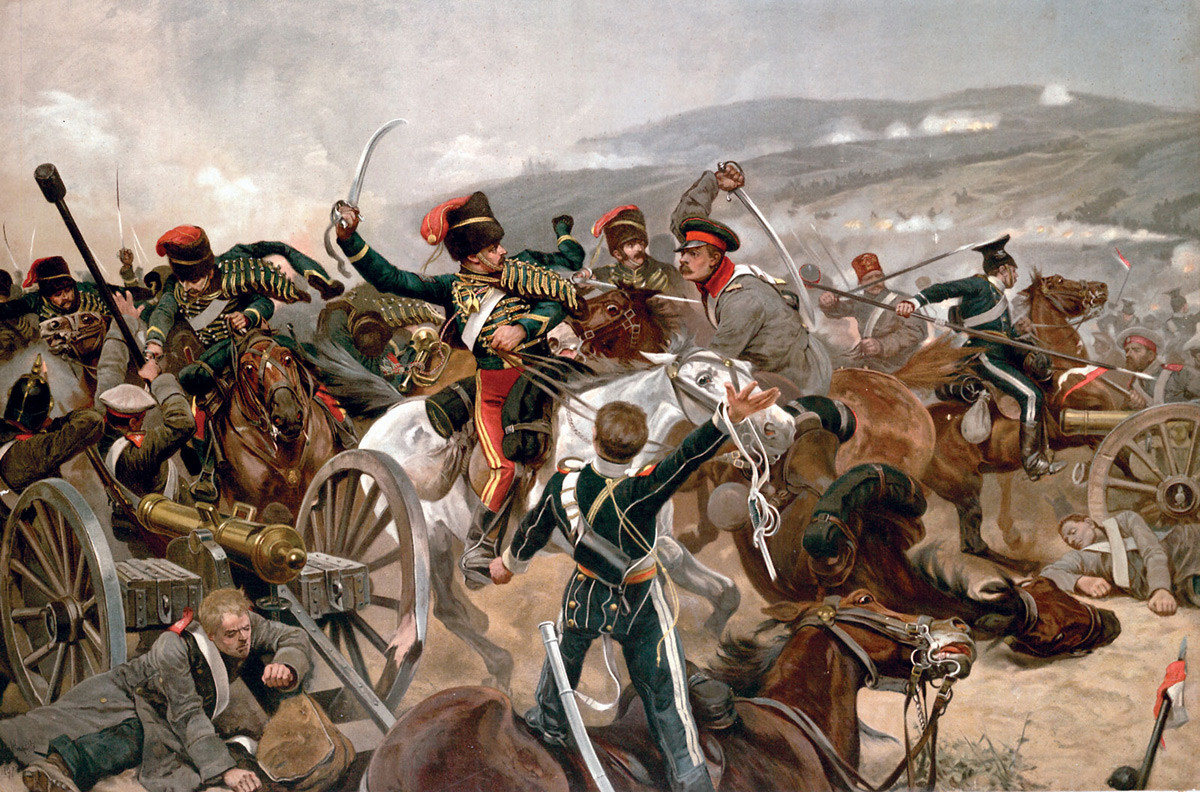 In the mid-19th century the Russian Empire had its sights set on taking advantage of the weak Ottoman Empire and gaining a foothold in the Balkans. Such intentions were, however, opposed by a coalition of Great Britain, France and the Kingdom of Sardinia.

Despite the name, the war was fought not only in Crimea, but also in the Balkans, the Baltic Sea, the Russian North and even the Russian Far East. The technically backward Russian troops could do little against the joint forces of the Great Powers, and after three years of conflict they suffered a bitter defeat.

The war severely undermined Russia’s international standing, not to mention losing the right to station a fleet on the Black Sea. On the other hand, the defeat opened the eyes of the Russian leadership, who launched a wide range of military and economic reforms in the country. 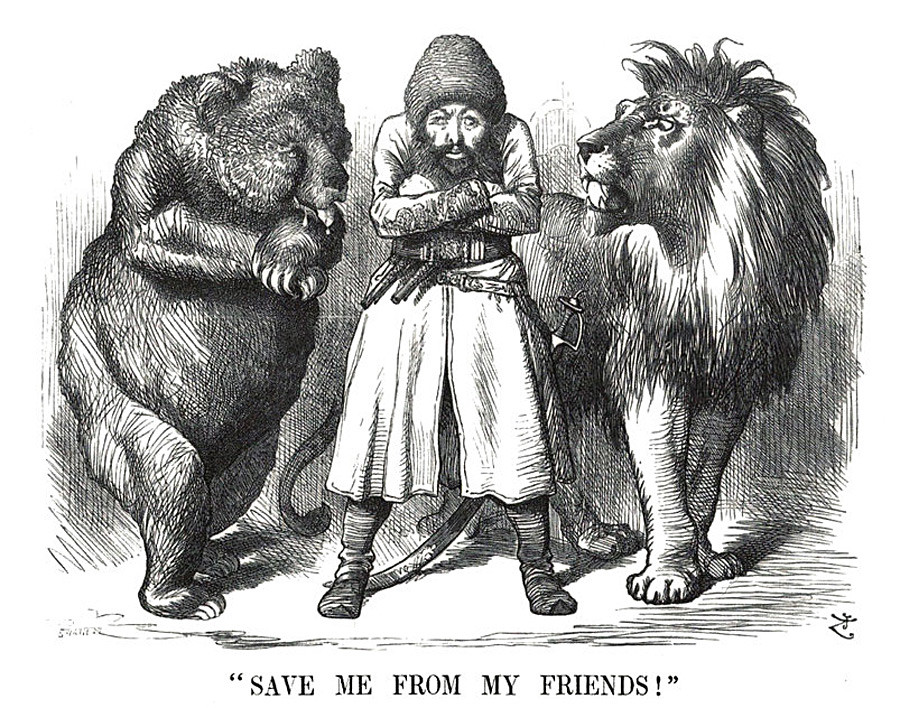 The Great Game: the Afghan Emir Sher Ali Khan with his "friends" Russia and Great Britain.

In the 19th century, the whole vast region of Central and Southern Asia became an arena of confrontation between the Russian and British empires. Absorbing small and weak local nations and states, they fought each other politically and diplomatically, waging spy and proxy wars.

So as not to allow this peculiar “cold war” to turn into open hostilities, the Russians and British avoided the establishment of joint borders, always leaving a line of buffer states between them.

When in the early 20th century the danger emanating from the German Empire became obvious, the two old rivals overcame their misunderstandings and launched cooperation within the Triple Entente. The focus switched from Asia to Europe, where World War I had already showed up at the doorstep. 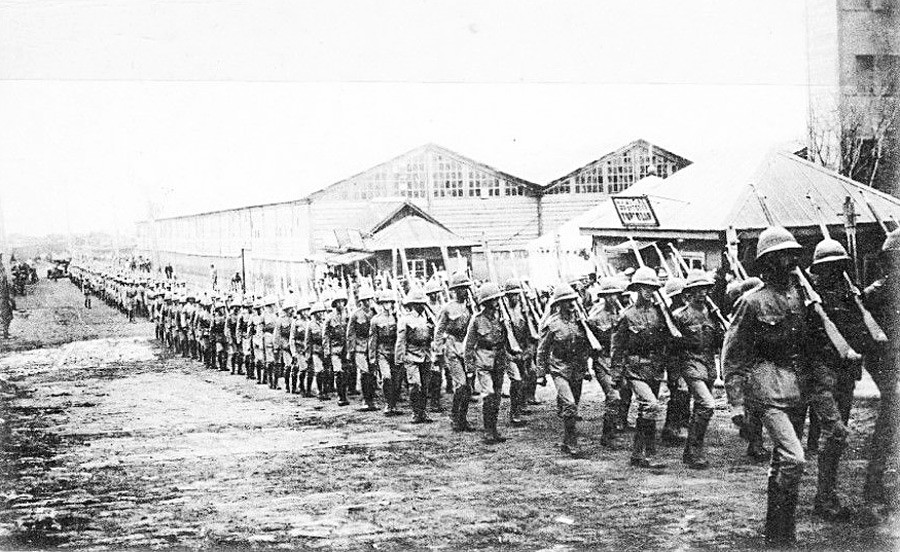 Landing of the British troops in Vladivostok

In 1917, drowning in the chaos of the Civil War, Russia became a tidbit for foreign countries. Officially proclaiming support for the White movement in the Civil War and the struggle against Bolshevism, the interventionists were more concentrated on their political and military expansion into Russia, seeking to further weaken their geopolitical rival and exclude it from the world arena for years, if not for decades to come.

Great Britain’s participation was the largest in the Allied intervention. Along with its dominions (Canada and Australia), Britain sent 40,000 soldiers, who captured the main ports and cities in the Russian North, South and East.

The interventionists preferred to avoid open clashes with the Bolsheviks, favoring the role of spectator. When the Whites were crushed by the Red Army and discontent with the intervention became too high in their own countries, the Great Powers evacuated their expeditionary forces. By summer 1920, no British soldier was left in Russia.