What could you buy in vending machines in the USSR? 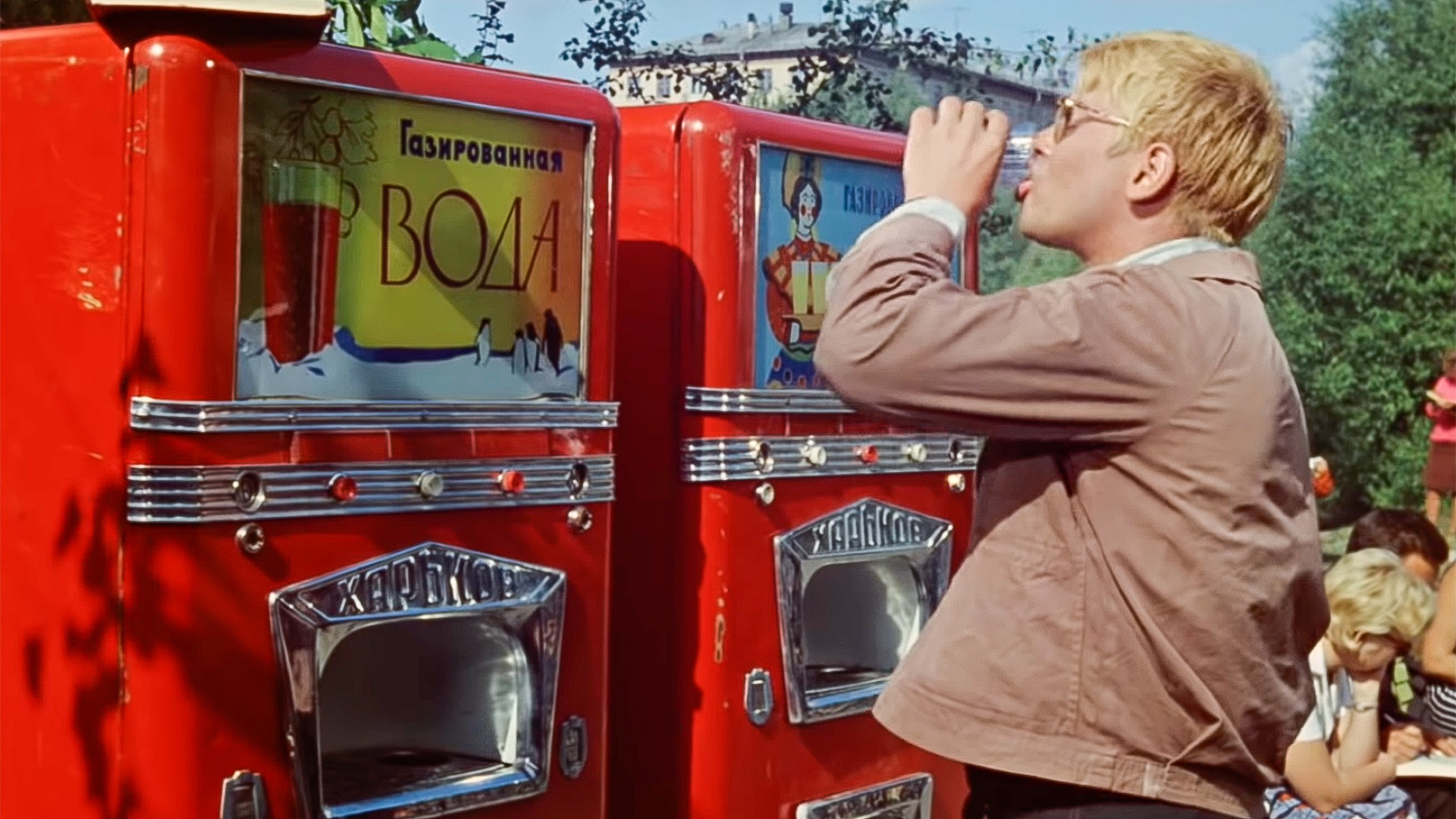 Leonid Gaidai/ Mosfilm, 1965.
How the Soviet Union got its first automated kiosks and why they disappeared.

The idea of automating (and optimizing) manual labor was very popular in the Soviet Union. The first vending machines (as well as hamburgers and canned food) were brought from the USA by the people’s commissar of the food industry, Anastas Mikoyan (the author of the legendary The Book of Tasty and Healthy Food), but World War II interfered and none of those novelties had the time to catch on.

The second wave of automation in retail and catering came in the 1950s, after Soviet leader Nikita Khrushchev's trip to the United States: vending machines appeared on the streets, in factories, at metro stations and airports. But what did they sell? 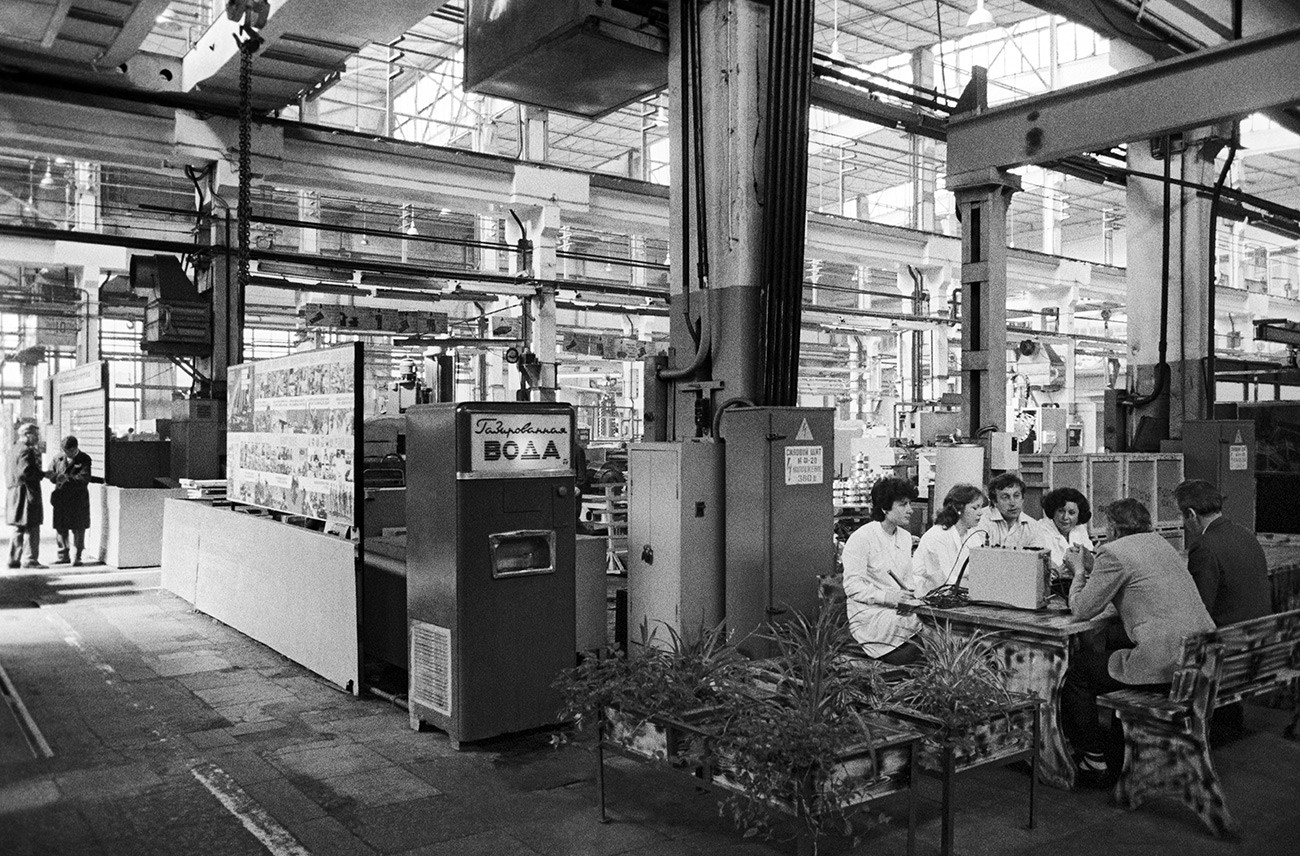 Soda fountains could be found practically everywhere, from parks to community centers. They sold either plain soda or soda with syrup. The syrup was usually pear or orange. Soda was poured into an ordinary glass, which came together with the machine, so once a customer had their drink, they were expected to place the glass upside down into the washing fountain next to the dispenser to have it cleaned before the next customer. 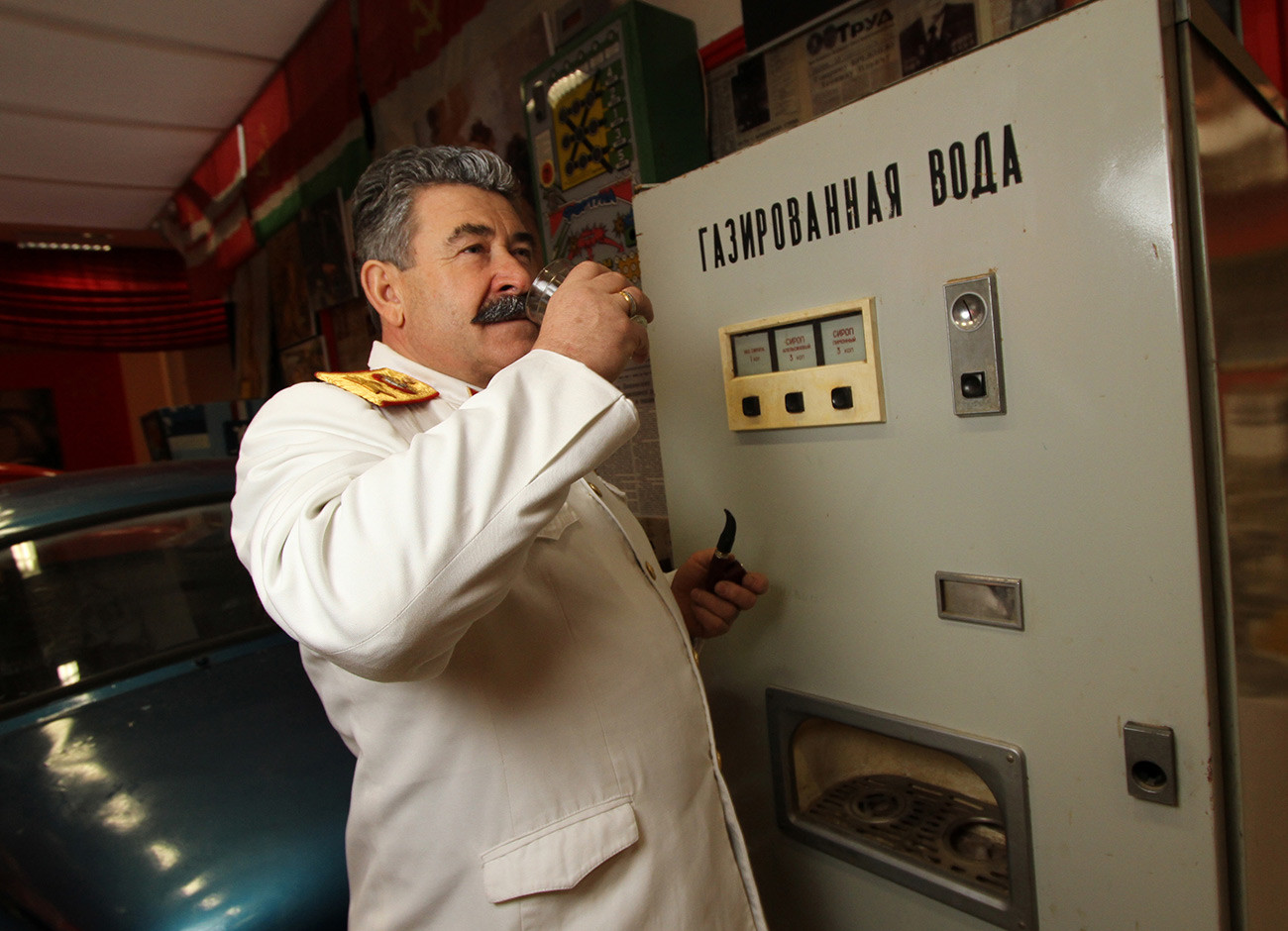 Stalin's double at the opening of the Museum of the USSR in Moscow. 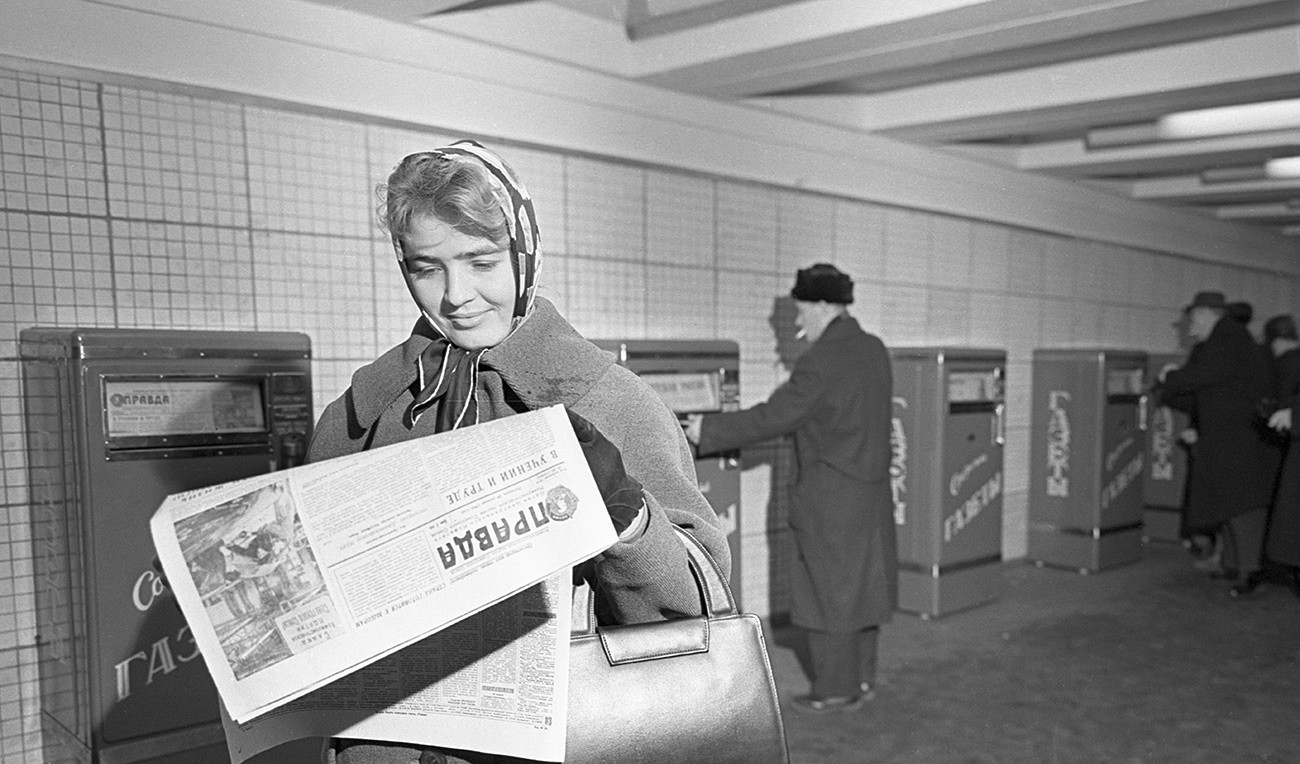 The most basic newspaper vending machine also appeared in the USSR after Khrushchev’s visit to the United States. It was a mechanical device: when you put a coin into the slot, it pressed the lever, which 'released' the newspaper. Newspaper vending machines were located on the subway, at train stations, and in underpasses. Their present-day equivalents could be seen at Moscow Metro stations up until just a couple of years ago. They were, however, removed, since most passengers prefer to read papers online these days. 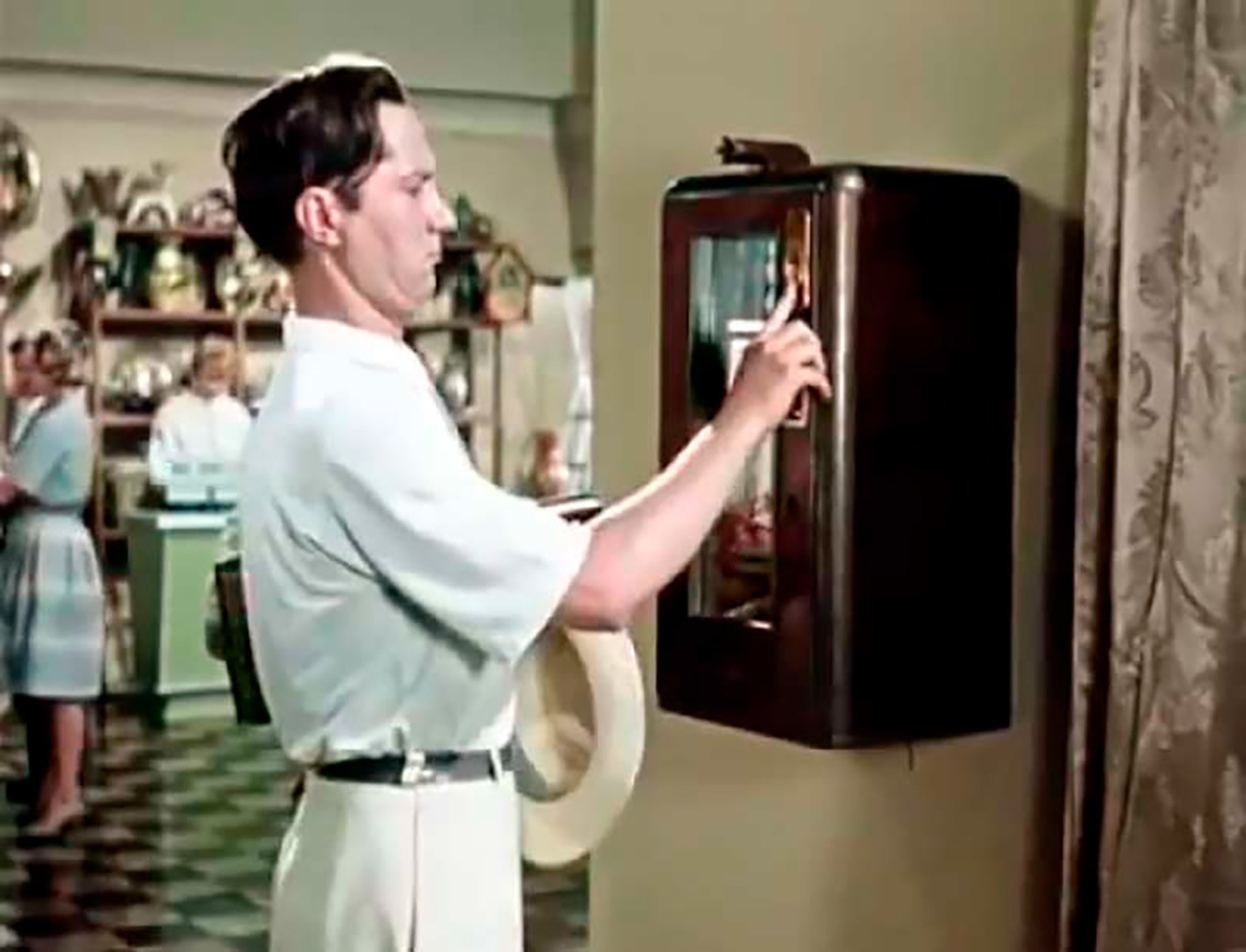 These unusual devices dispensing perfume and cologne could be seen near hairdressers and hotels. It was a great idea, but the devices did not last long: due to a design fault, their atomizers quickly broke down, rendering the devices unoperational. The last of them could be found at VDNKh (the Exhibition of Achievements of National Economy) in Moscow in the 1980s. 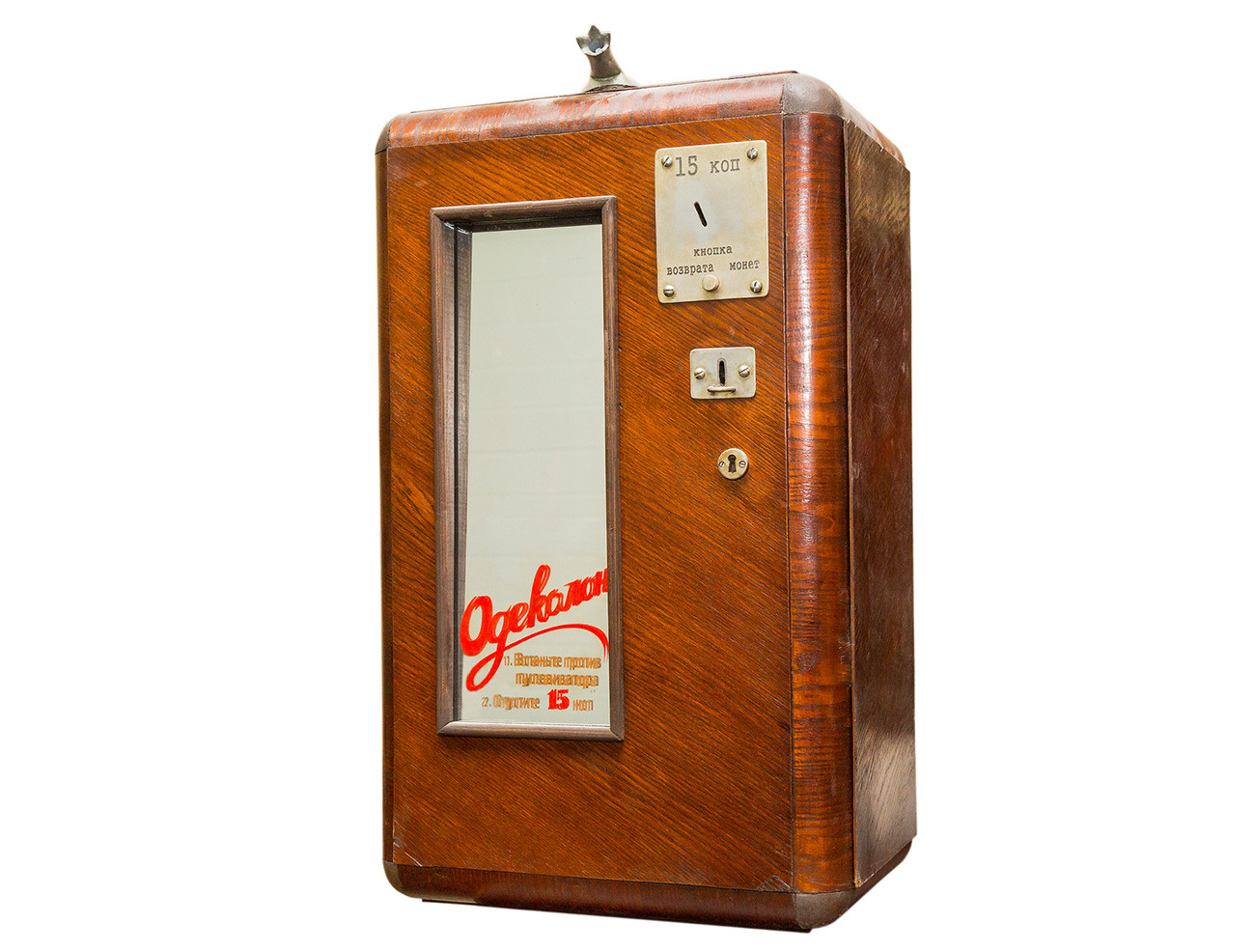 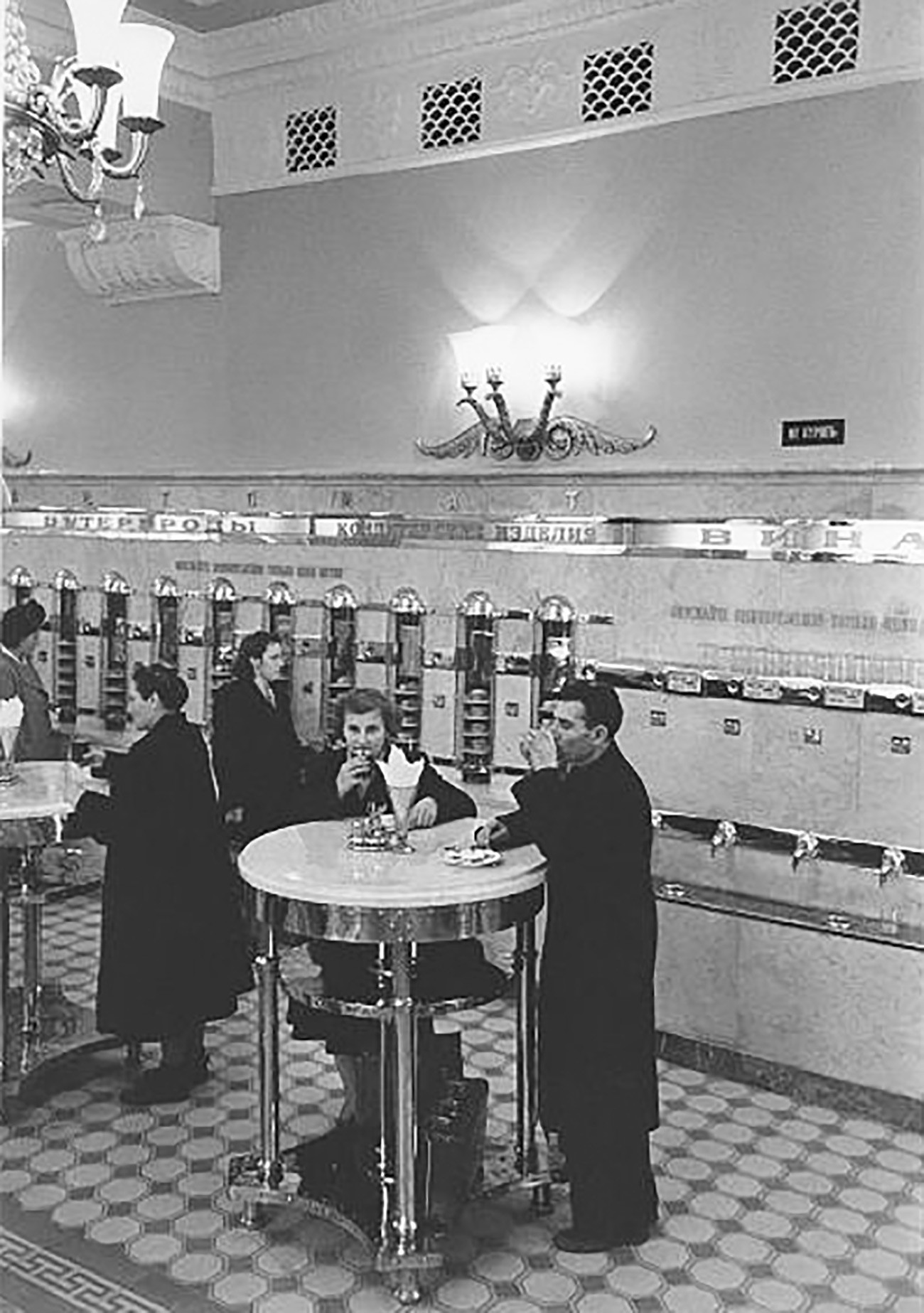 Self-service cafeterias with vending machines were a not an uncommon thing in big Soviet cities. They first appeared back in the 1930s: the idea had also been brought from the U.S. by Mikoyan. 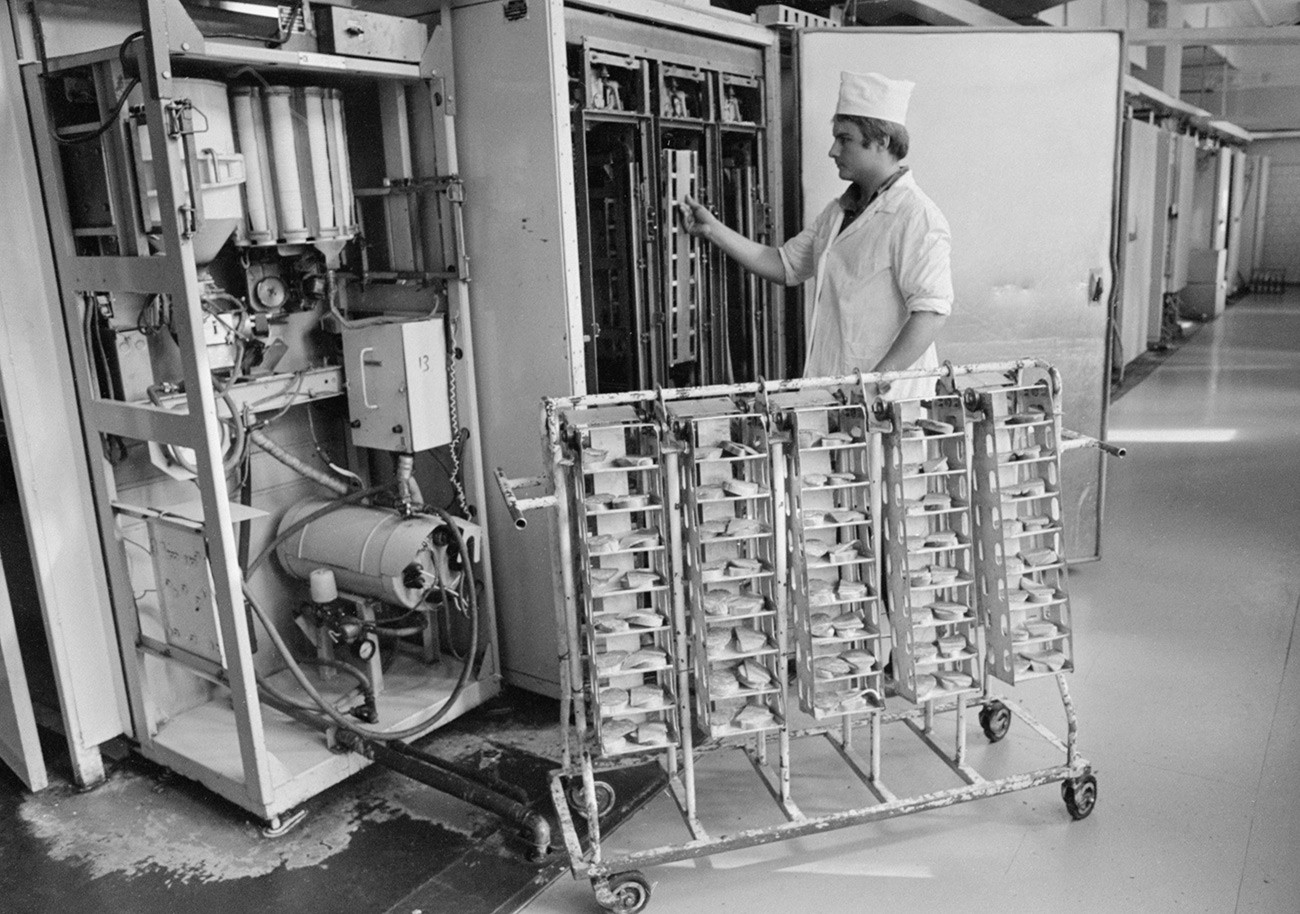 One of the largest of these cafeterias was in Leningrad (now St. Petersburg). It had 25 vending machines selling sandwiches (with cheese, sausage, caviar, ham, and fish, etc.) and cold starters (with a choice of fish, meat or vegetables). There were also vending machines with hot drinks (tea, coffee and cocoa), beer and lemonade.

The place was quite popular: on the first evening, it welcomed some 3,000 customers. During the war, the cafeteria was closed. It reopened in 1946. In 1957, it had its vending machines replaced with new ones, made in the German Democratic Republic (DDR). The menu was also revamped, however, it did not go down well with customers, who dubbed the place “café gastritis”. By the late 1970s, it had only a handful of vending machines left, selling juice, sandwiches and cakes. The cafeteria lasted until 1995. Today, there is a McDonald's in its place. 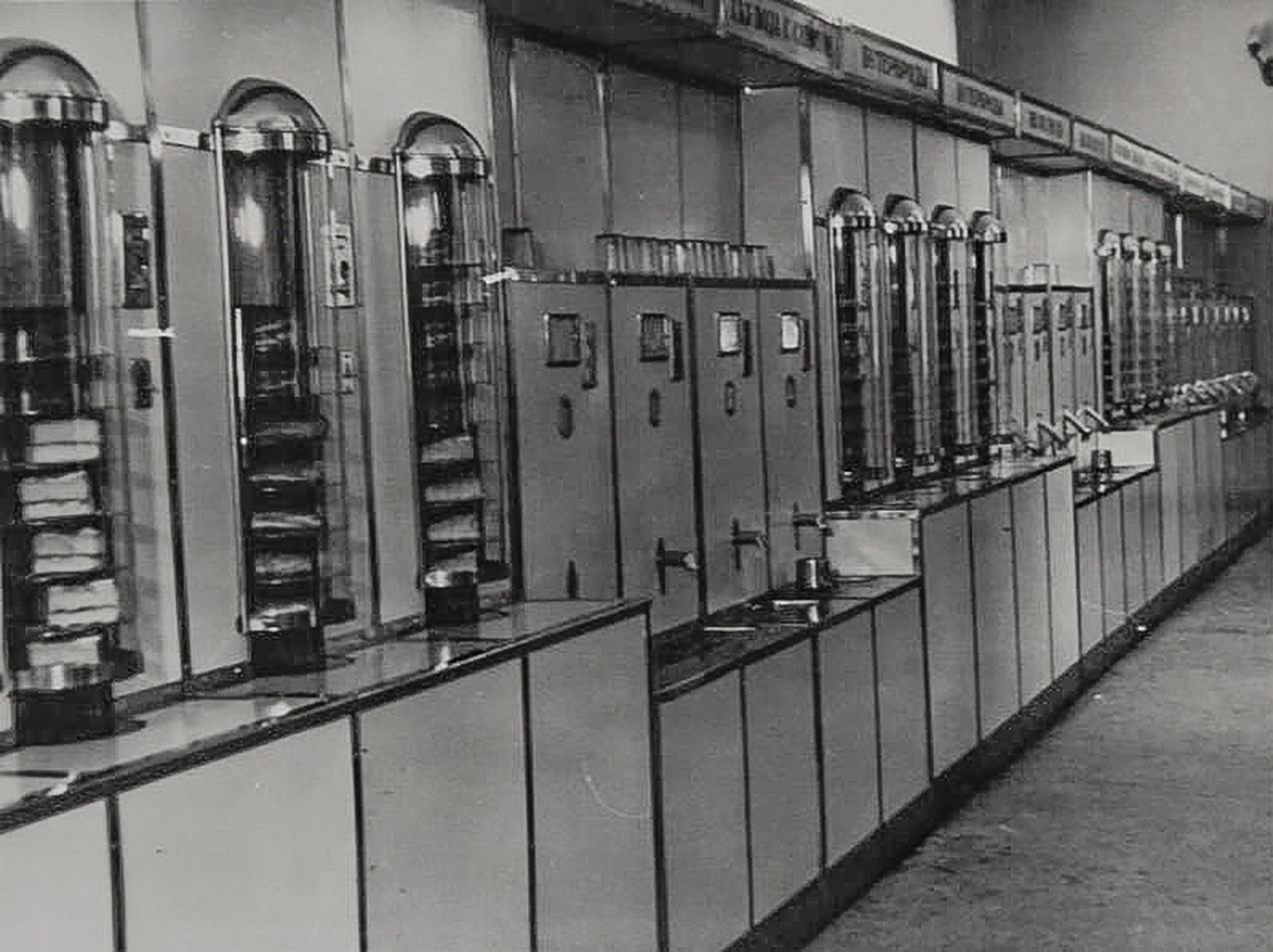 In Moscow, a similar cafeteria was located near Novaya Square. It boasted some 40 cold and hot dishes and beverages on its menu.

To get a sandwich, a customer had to first buy a token from the cashier. Each vending machine took a specific token. According to Soviet Trade magazine, the cafeteria served around 10,000 people per day. It operated from 1954 to 1961: with time, the vending machines slowly went out of order, and the place eventually became an ordinary canteen. 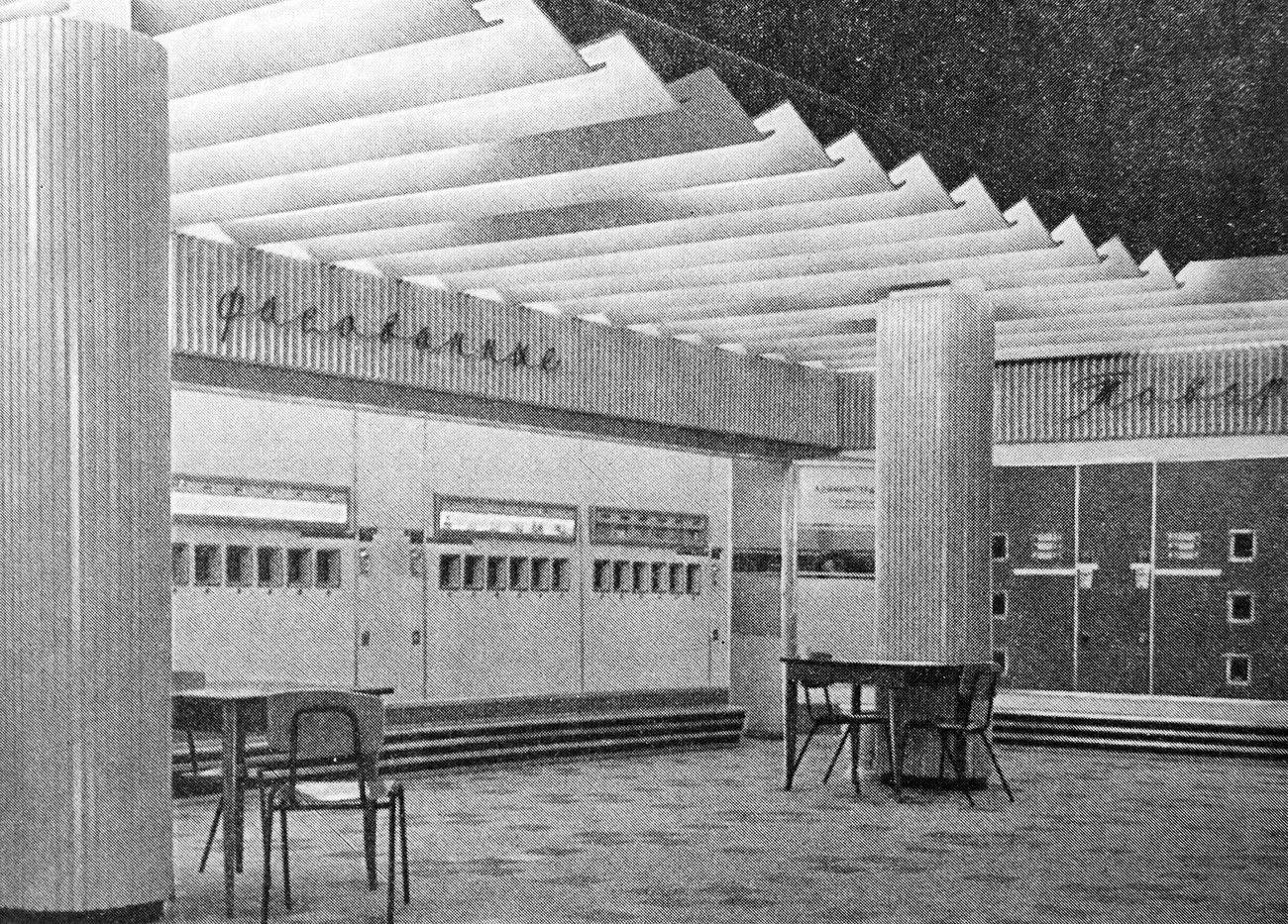 In the 1960s and 1980s, Moscow had a store called ‘Progress’. There were no counters or shop assistants there, only vending machines supervised by a single operator.

They sold dairy products (such as milk, kefir, condensed milk, butter, curd snacks), bread and canned foods. If a customer did not have coins, they could use a change machine.

By the 1970s, vending machines were slowly going out of fashion. Firstly, their maintenance was very expensive: if a component broke down, the machine took months to be repaired.

Secondly, the Soviet Union was hit by an economic crisis and there were shortages of many goods, so most vending machines were empty – just like the shelves in ordinary stores.