‘Young Pioneers’: Whatever happened to the Russian version of the Boy Scouts? 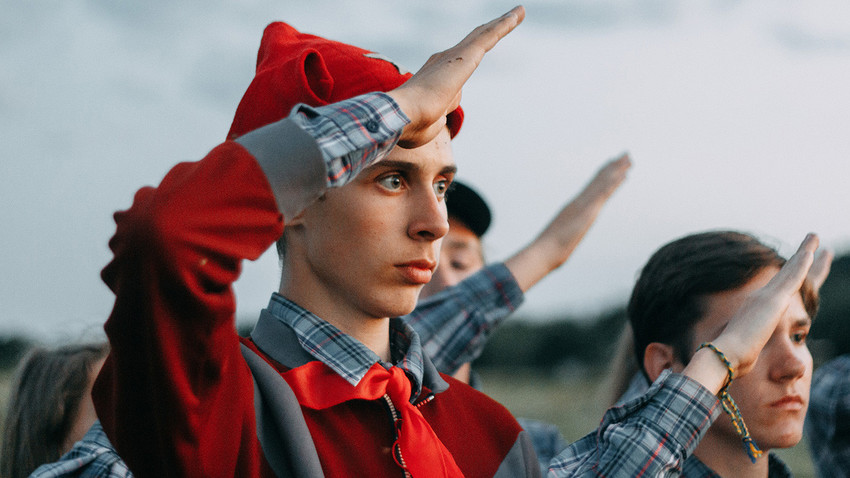 АГШШ
Every summer, 100 Arkhangelsk teenagers voluntarily give up their screens and other modern conveniences to spend 3 weeks in a boy scout-style summer camp. For more than sixty years, alone with nothing but nature and their comrades...

Once upon a time there were millions of Young Pioneers in red neckerchiefs. All across the vast lands of the USSR, young people gathered on holidays to march in geometrically stunning parades, turning to salute a banner bearing Vladimir Lenin’s profile. Widely supported by the Communist party, the pioneers formed their own organizations and movements, helping their elderly and younger comrades, planting trees, and collecting paper for recycling.

In 1961, in the Northern Russian city of Arkhangelsk, deriving from the All-Pioneers Organization, the Arkady Gaidar Arkhangelsk Schoolchildren Headquarters (abbreviated as AGShSh - or АГШШ) was born. It was to become one of the oldest and most durable Russian young people’s organizations that remains active and full of potential even today. 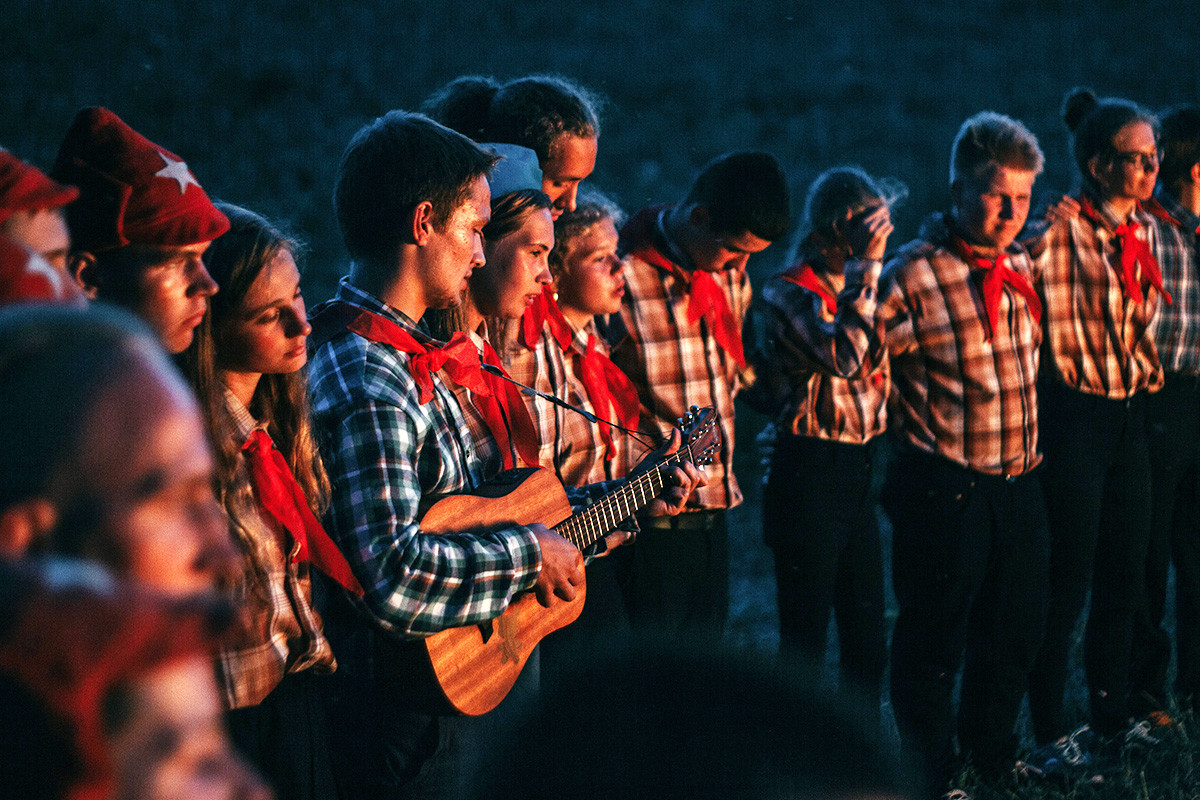 Inspired by benevolent and noble activities performed by young heroes from children's writer Arkady Gaidar’s novels, a few enthusiasts from Arkhangelsk decided to form their own organization, similar to the Young Pioneers’ initiative in its goals and symbols, but quite different in its implementation.

By the time the young Arkhangelsk enthusiasts decided to form their own headquarters, the Vladimir Lenin All-Union Young Pioneer Organization had already been around for 40 years years, originating in the early 1920s. Throughout its history, the pioneer movement engaged millions of Soviet schoolchildren, raising communist-oriented and politically mindful citizens for the good of the country. 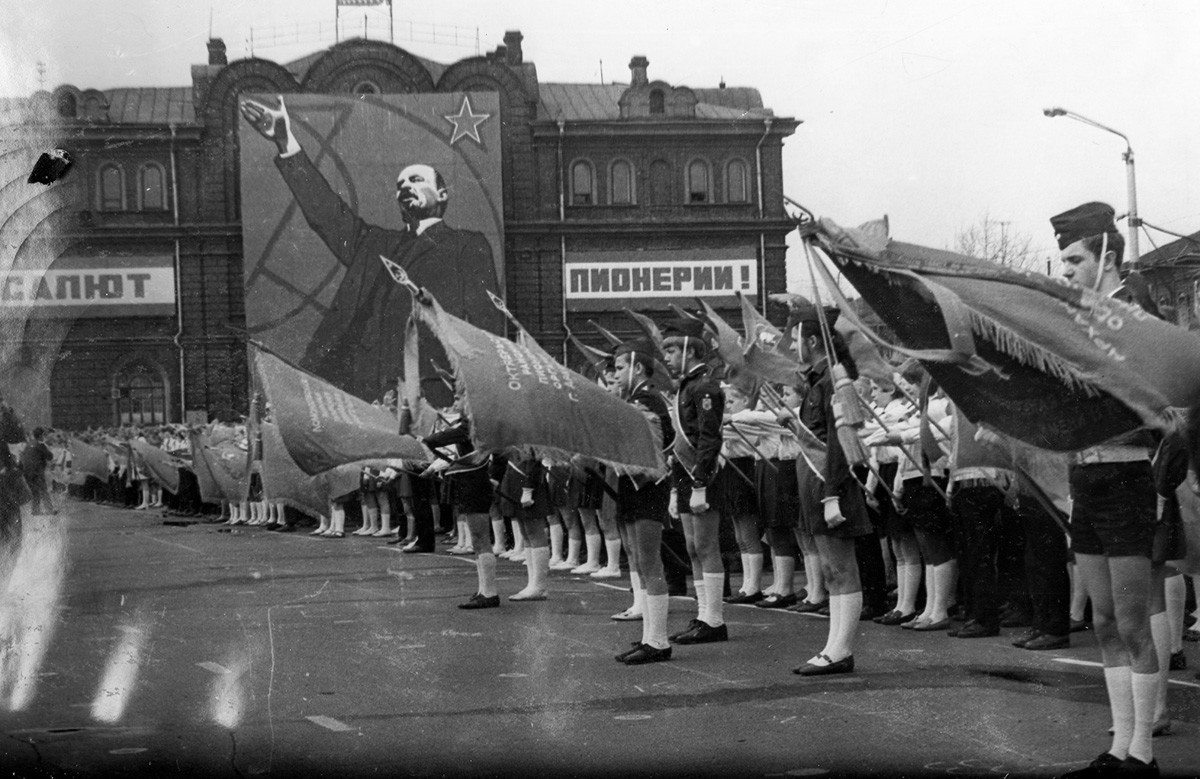 Ideologically, the Soviet government planned such a movement to be communist, but formally and structurally - not very different from scouting organizations in old Russia and the West. The young enthusiasts of Arkhangelsk decided that they wanted to start something quite different. They modeled their organization after witnessing the success of communes and schools formed by prominent Soviet education theorist and social-pedagogical youth movement founder Igor Ivanov, who based his teachings on principles of collective creative deeds, mutual care and respect.

And so, the young enthusiasts from Arkhangelsk created their own organization, calling themselves ‘communards’ - inspired by Ivanov’s communes. A substantial difference from the pro-communist pioneer organization was that the communards did not impose any strict ideological rules on their members, but fostered everyone’s freedom of creative expression and development. 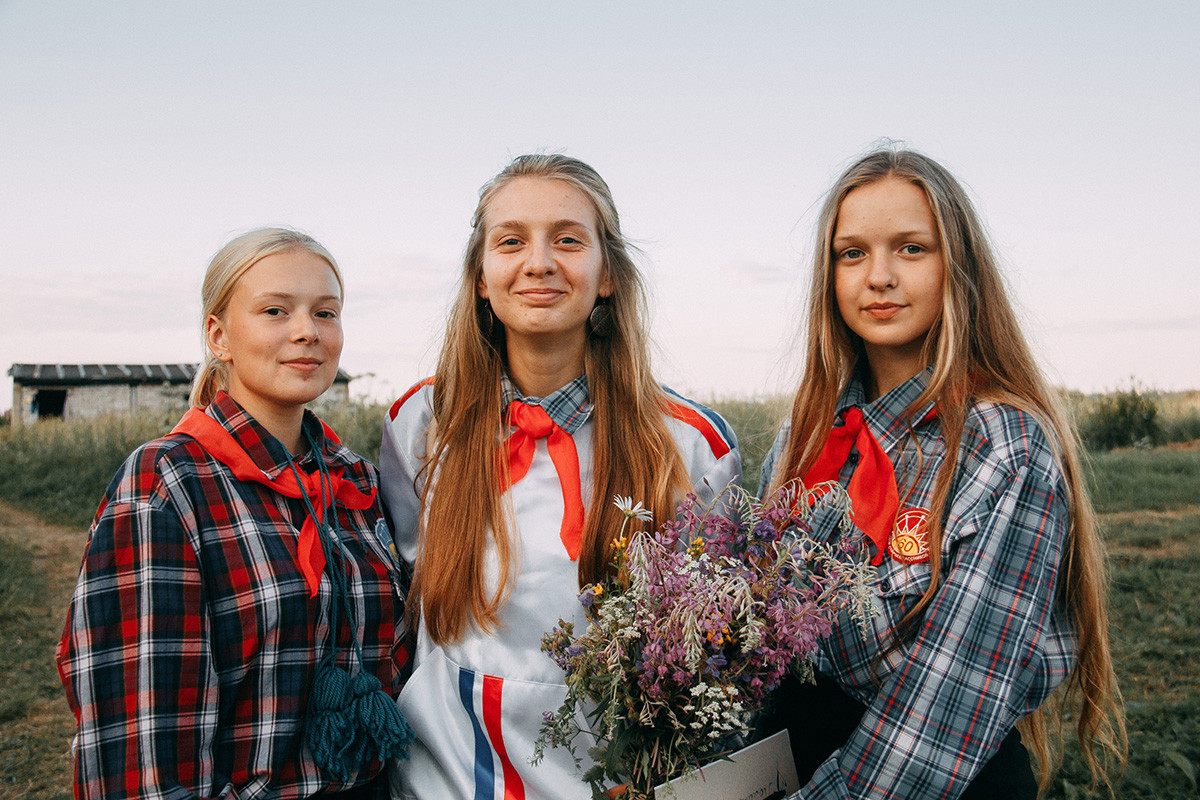 The АГШШ’s everyday activities, however, remained very similar to those performed by the Pioneer movement, the АГШШ organization’s older brother. Both organizations intended to maintain universal moral ideals in young people by engaging them in doing good things for cities and regions, akin to the purposeful characters of Arkady Gaidar’s novels. Therefore, all of the young activist organizations contributed to the preparation of pioneer parades, assisted Second World War veterans, planted trees in their cities, and formed clubs of creative activists at their schools. 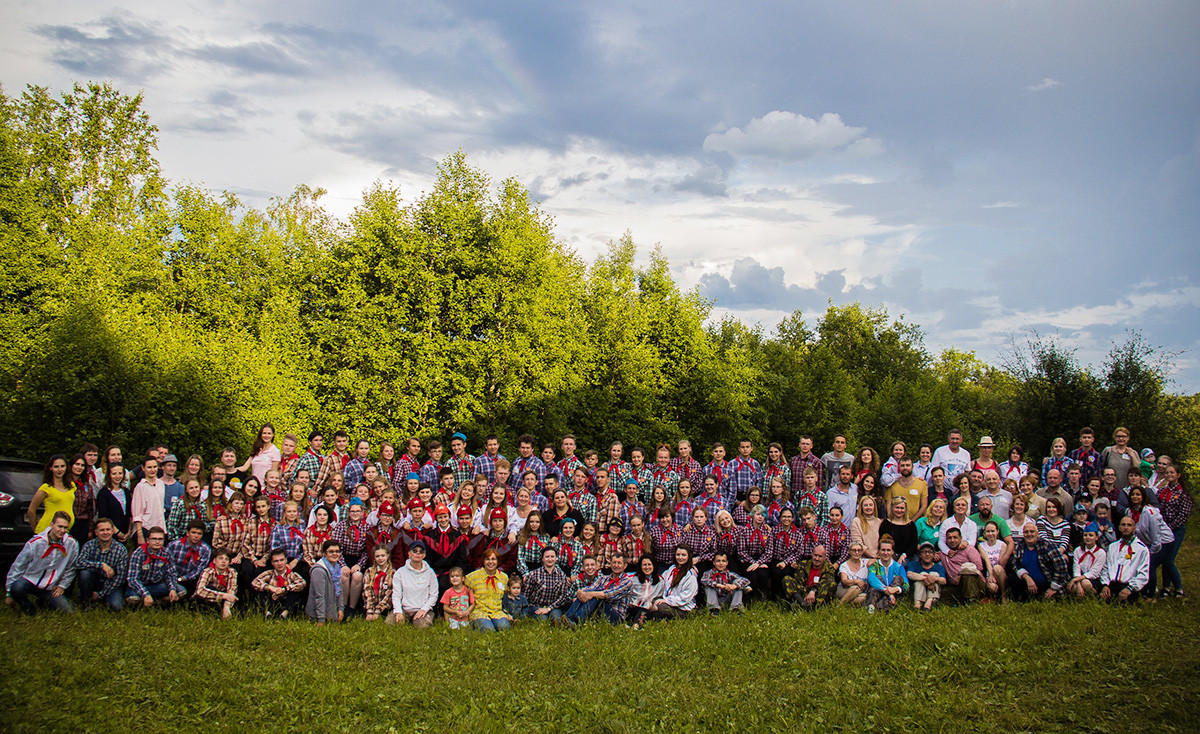 The АГШШ’s similarity to the USSR’s mainstream pioneer movement was the main reason the organization survived in such a highly ideological era, which didn’t allow many deviations. However, when the Soviet Union collapsed in 1991, pulling all mainstream pioneer organizations down with it, the small АГШШ remained relevant for young people, and survived, maintaining its traditions to this day. 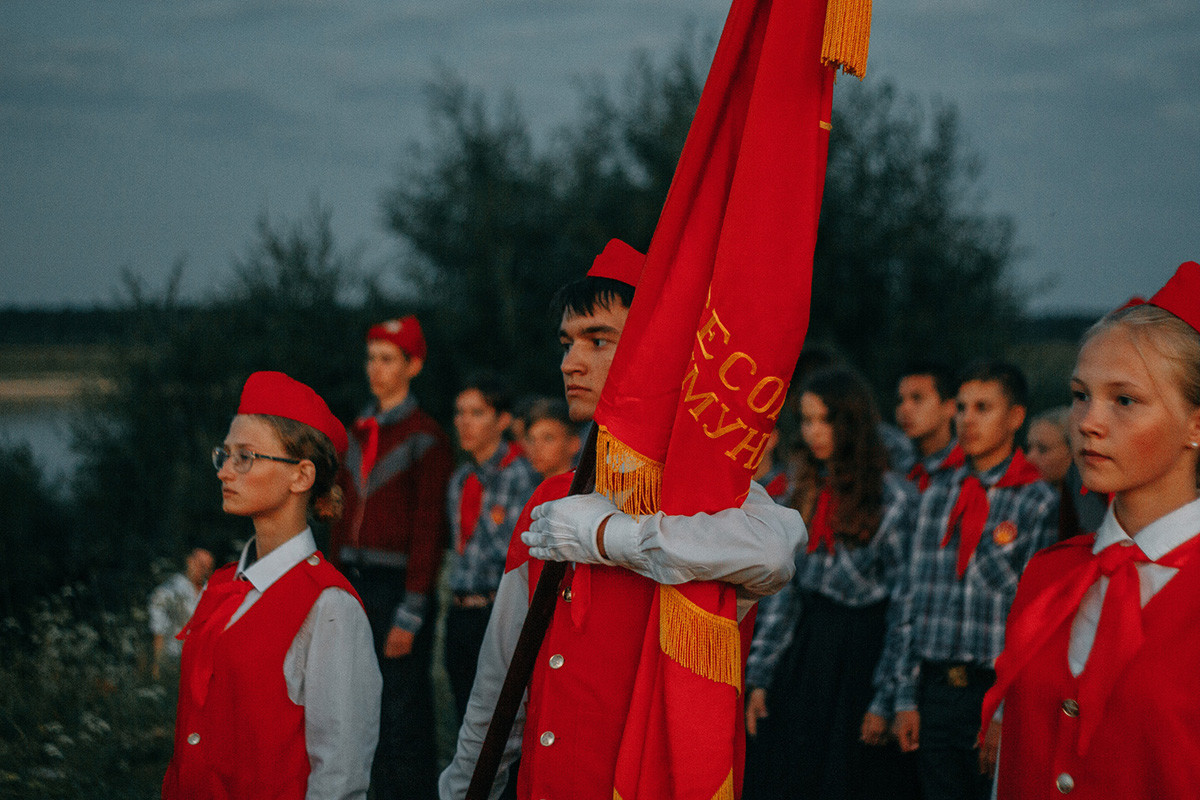 Since the mid-1960s, every July, on the shores of the Dvina river, close to Arkhangelsk, devoid of any political influences, young Arkhangelsk enthusiasts and activists have been gathering for a communard summer camp to spend 21 days in a small ideal world. Every July, with the motto “Our goal is the happiness of all people”, young enthusiasts have been organizing their camp life without any help from adults. 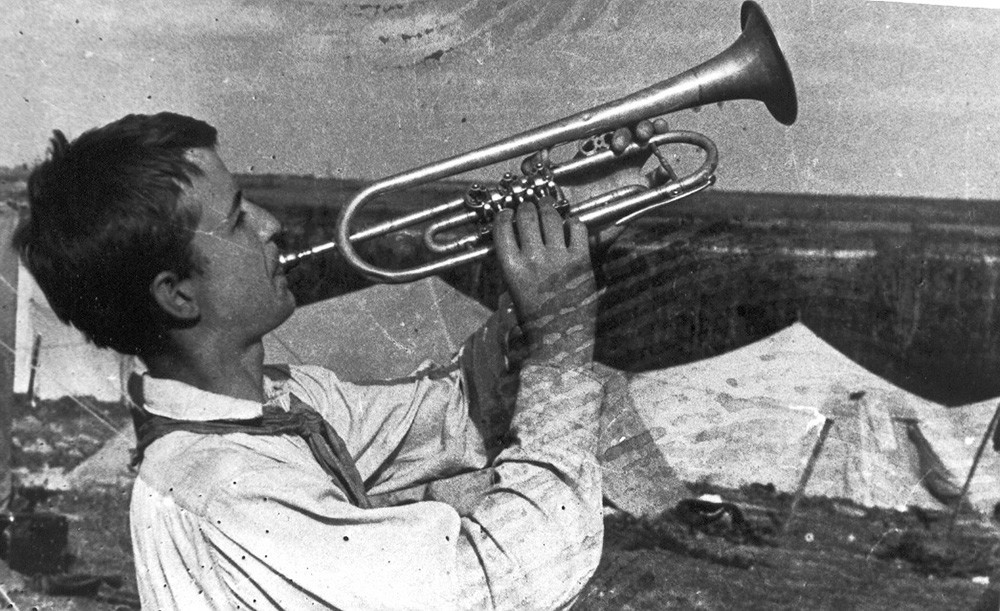 The work includes building a public dining hall, setting up tents, cooking, and organizing entertainment for the three weeks. This form of collaboration proved to be extremely successful for all participants, who could develop their organizational and leadership skills as a substantial contribution to their future careers. Alexei Kudrin, Russia’s longest-serving finance minister and current chairman of the Accounts Chamber, is among the former members. 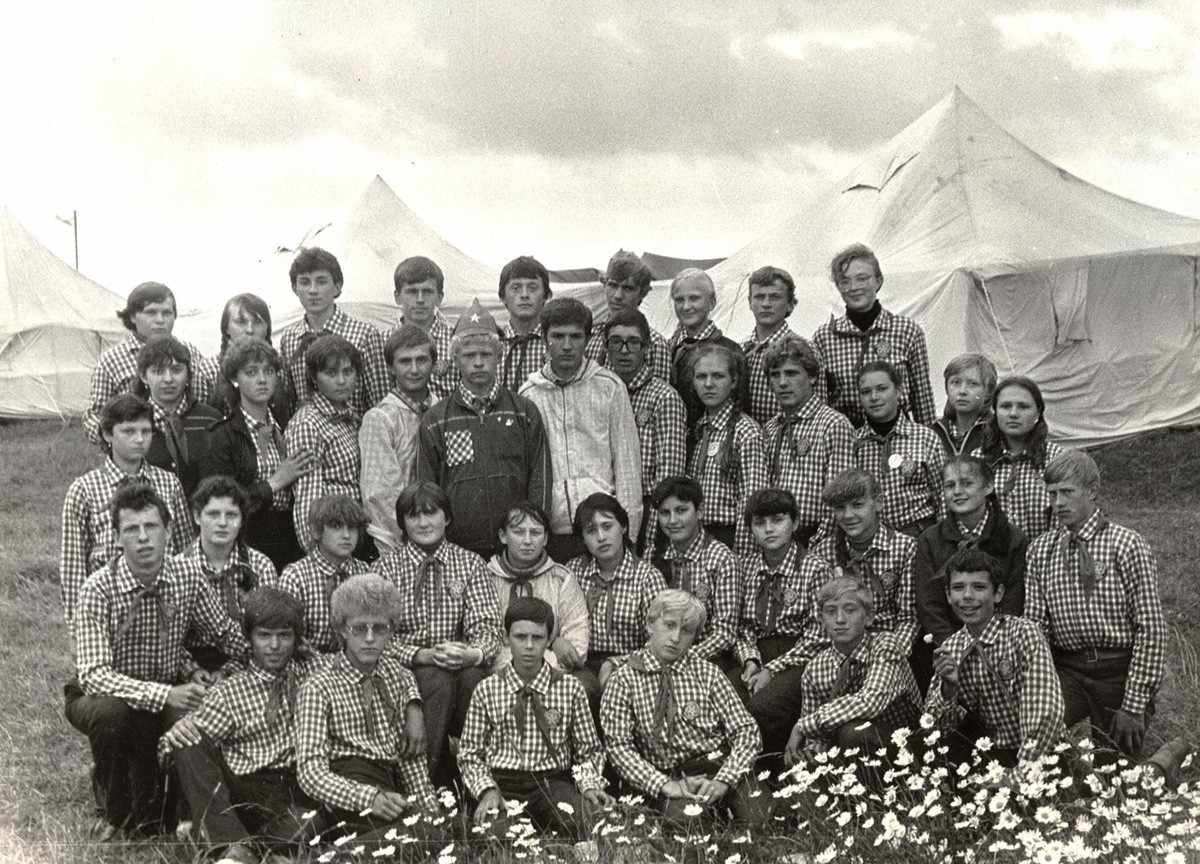 In creating their communard summer camp, the young Arkhangelsk activists borrowed a lot of traditions from the heritage of all-union pioneer camps. This is why Arkhangelsk communards share their symbology, uniforms, events and celebrations even today. 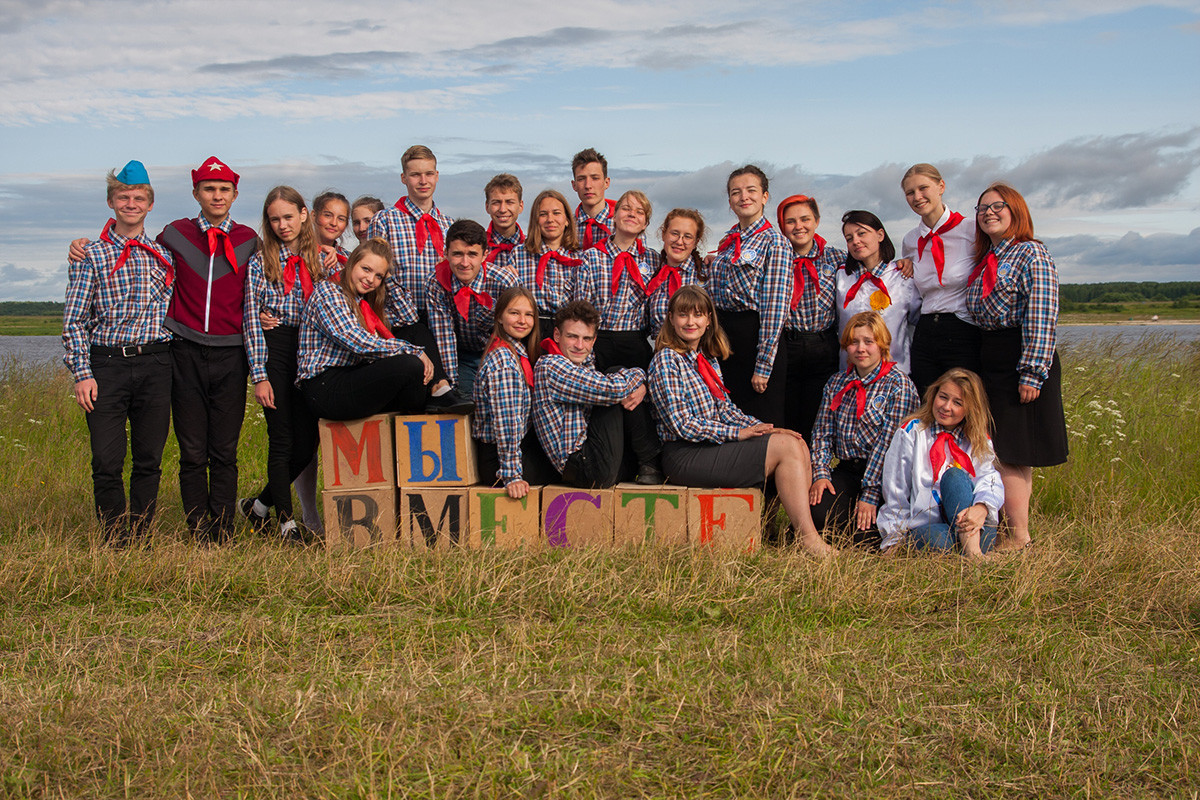 The members of the camp divide into four groups - otryads (отряды) - each with a particular color of checkered shirt. Each otryad elects its leader - a komsorg (комсорг), usually a more experienced member of the organization. 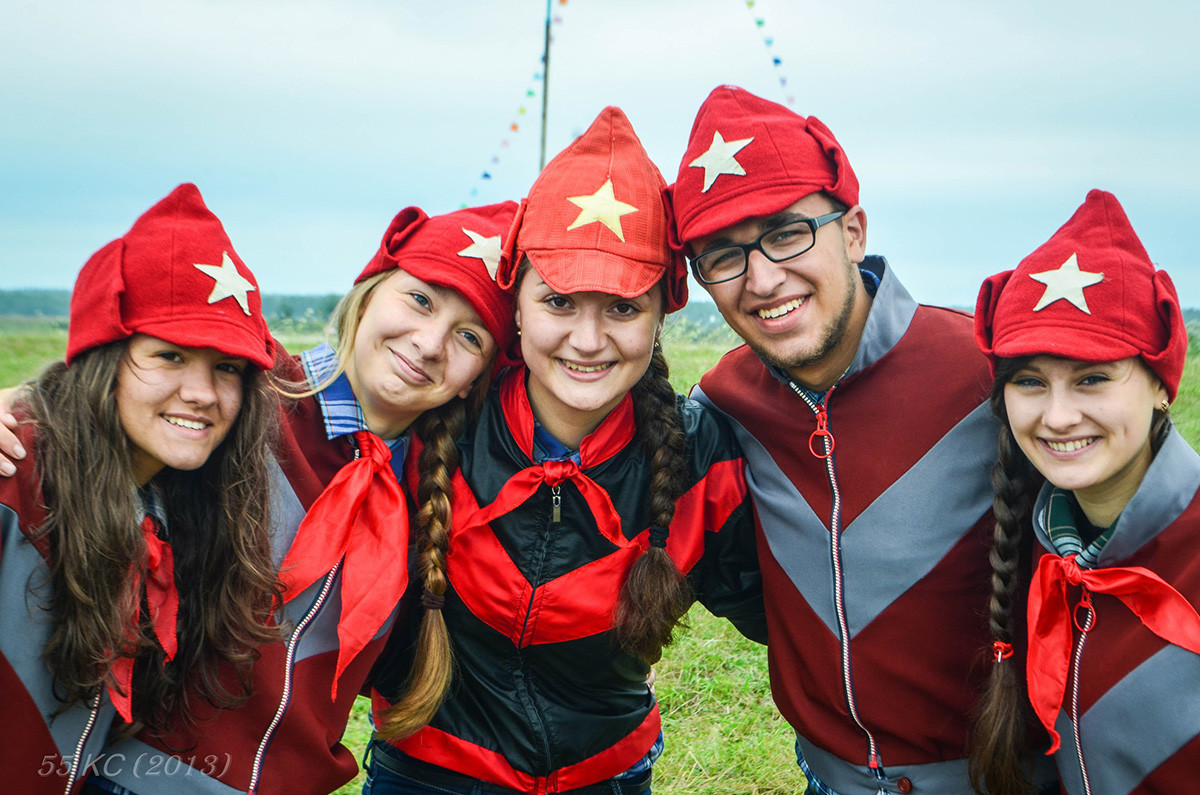 The komsorg’s uniform is a red-grey jacket and a red hat (budenovka), similar to those the Red Russian commanders wore during the Russian Civil War (1917-1922). The military or communist implications of this uniform are long gone, because the young communards created their own alternative, apolitical ideology with the help of similar attributes that symbolized rather different ideas. 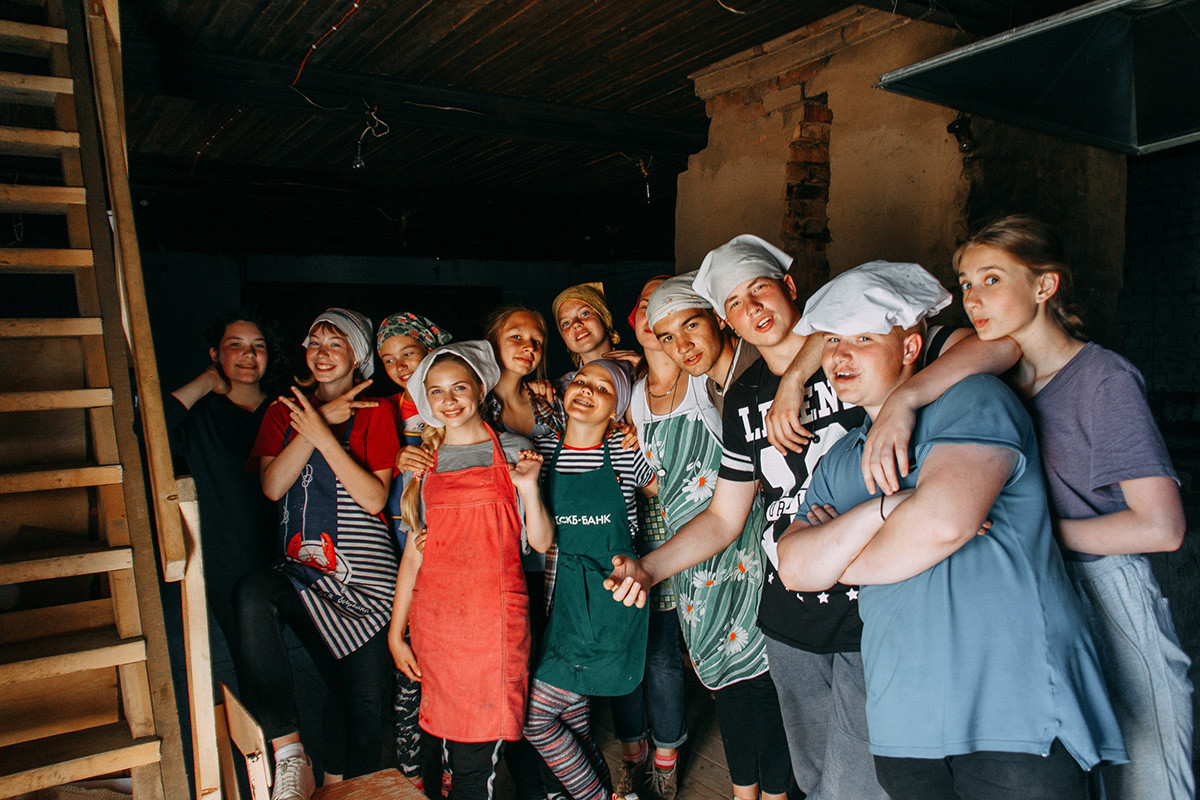 People in white jackets are vozhatiye (вожатые), the older members of the organization who help their younger comrades organize their activities. The vozhatiye are usually responsible for camp coordination and safety throughout the year.

Every day, one of the otryads takes a turn cooking for everyone with a real stone stove, whereas other camp members participate in entertainment or educational activities. 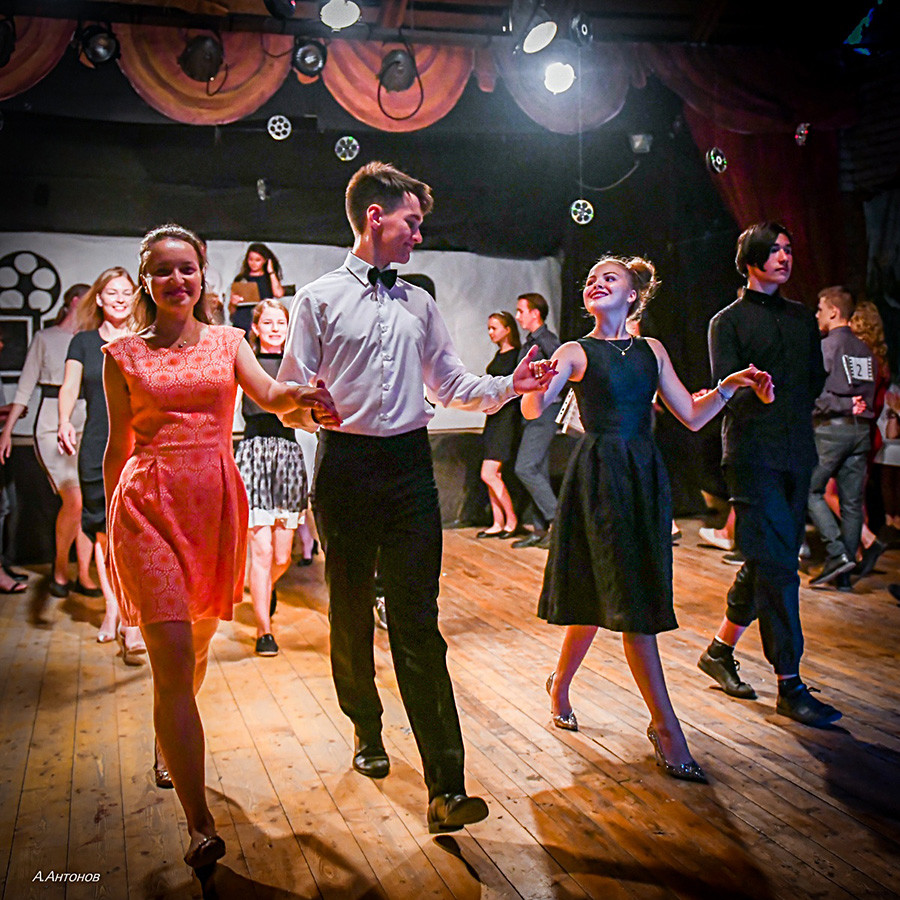 At the end of each day, everyone gathers for an evening event. All the participants are free to suggest what event they want to see during the camp, and if everyone agrees, they form a creative group to organize and perform it for the others. Some of the most beloved camp activities are an annual beauty contest and a ball dancing competition. Later, some of the older activists introduced these events to their schools and then started a tradition of regional beauty and ball dancing contests in Arkhangelsk.

Each otryad organizes a theatrical performance, engaging every member in it. Everyone also contributes to collecting the props and painting the decorations. 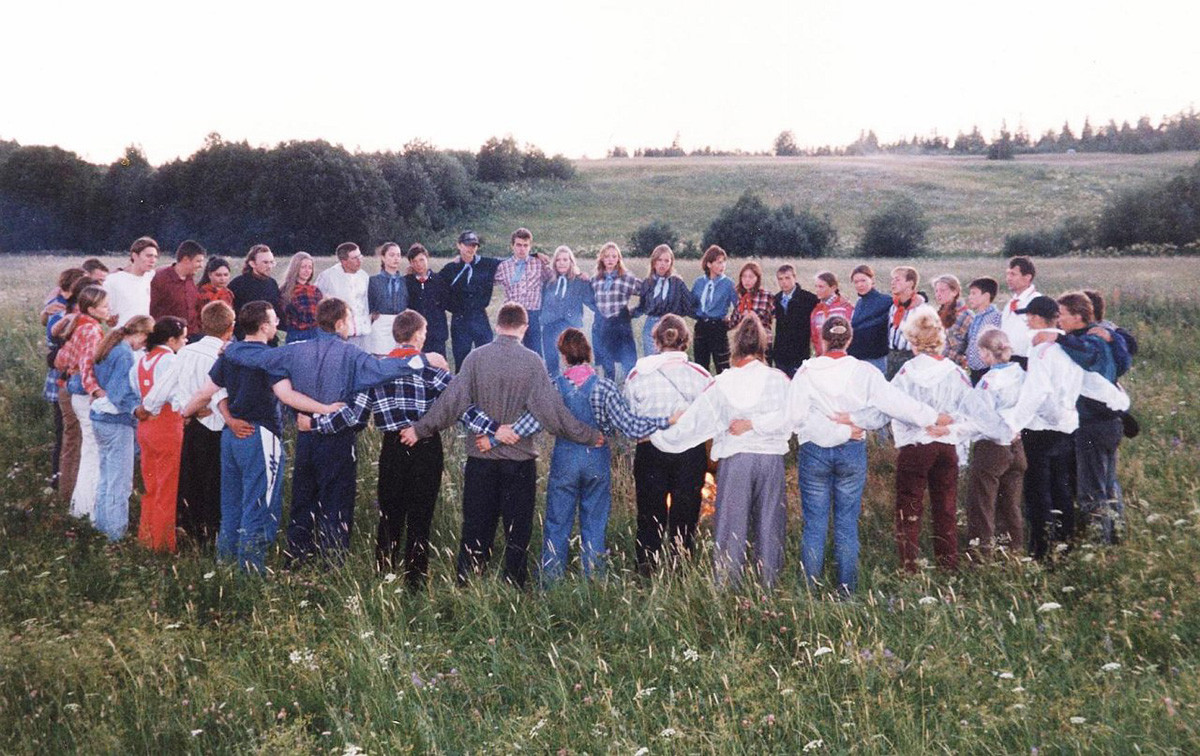 Similar to the Young Pioneer camps, the communard camp gathers for orlyatskii krug (орлятский круг), a gigantic circle in which everyone embraces each other, sings the camp’s traditional songs, and recites the motto “Our goal is the happiness of all people” every evening.

Even several decades after the numerous all-union young pioneers marched away into the past, together with the Soviet Union’s aspirations towards communism, the АГШШ has persisted, fulfilling its founding activists’ dreams. 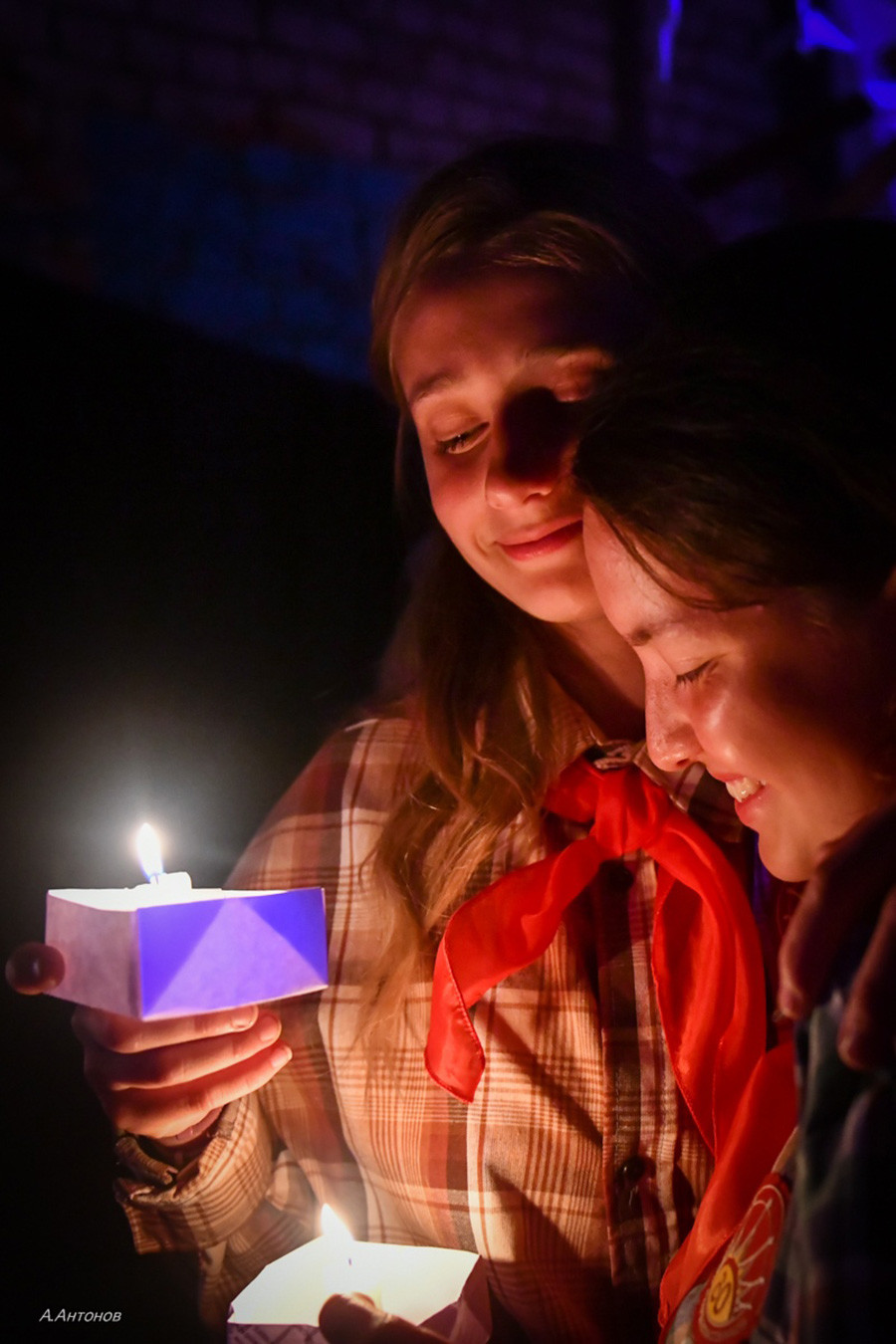 The АГШШ and its main project, the communard summer camp, still remain an absolutely unique platform for young people to learn from one another in truly unusual circumstances and to contribute to the happiness of all people, as their motto states.

And the young enthusiasts of Arkhangelsk kept doing their good deeds happily ever after.