5 facts about the distaff, the main sewing tool of a 19th century Russian woman 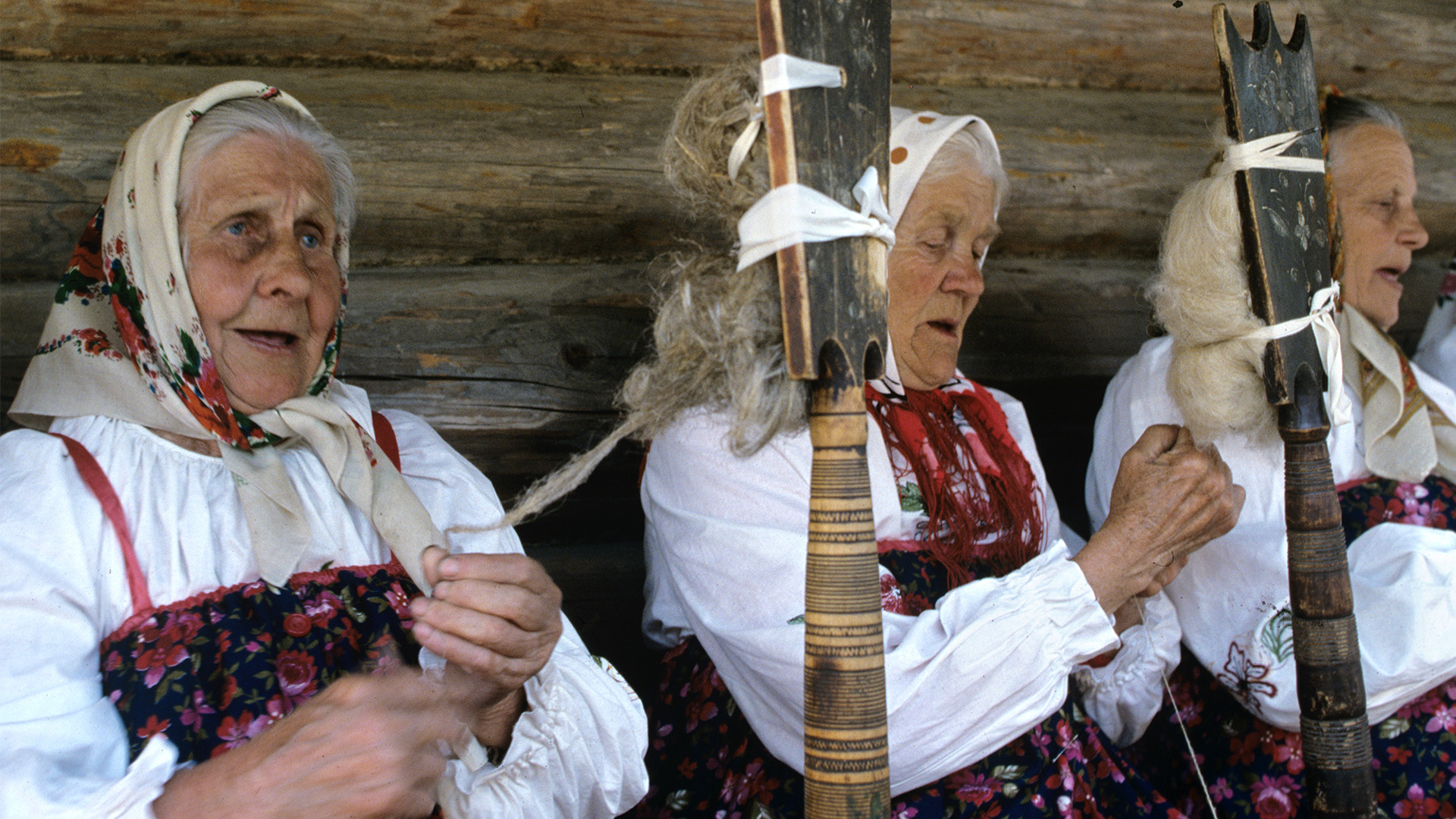 Sergei Samokhin/Sputnik
A distaff in Russia was treated not just as a household item but also as a work of art. Their unique decor has fascinated museum curators and collectors for more than two centuries.

In terms of their shapes and décor, Russian distaffs (prialka) are unique even among other Slavic nations. Distaffs were used in Russia up until the 1930s. Researchers differ as to when exactly distaffs first appeared in Russia and when they began to be decorated: museums started collecting household items only in the 19th century. The oldest surviving distaff is in the collection of the All-Russian Decorative Art Museum, for example, and dates to the late 18th century. 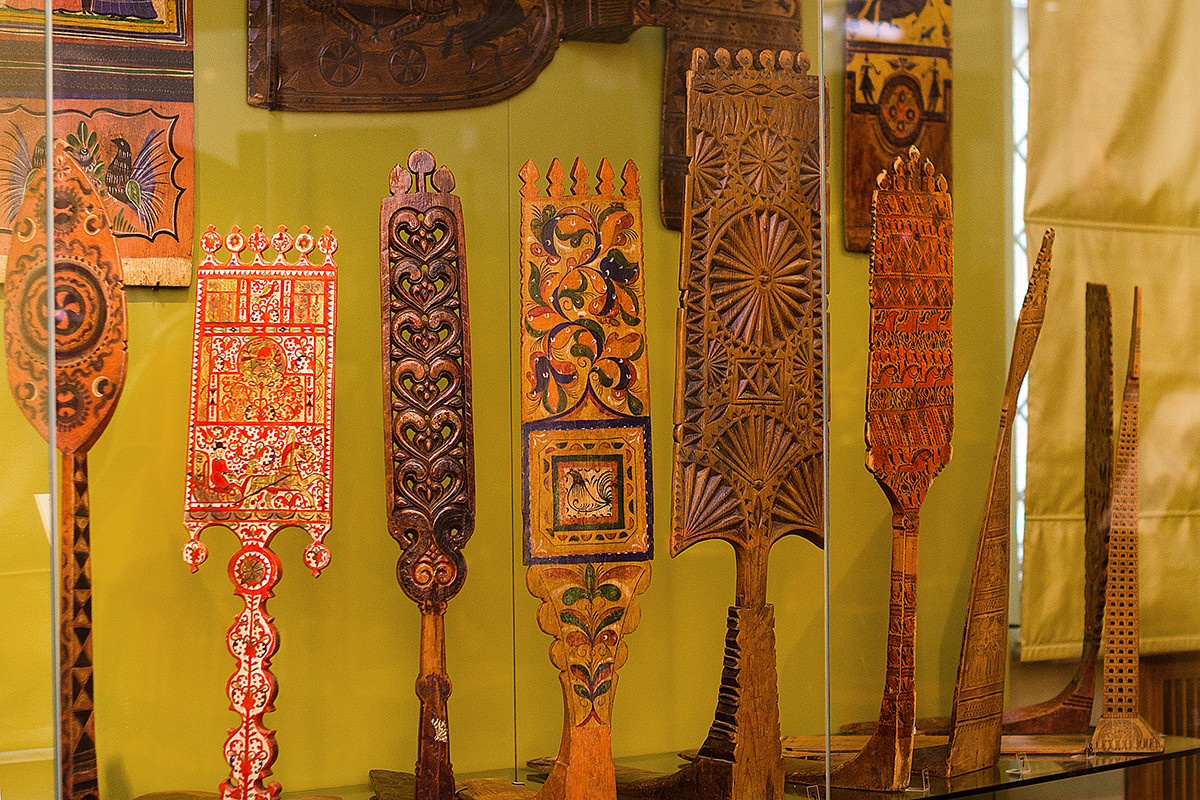 In central Russia, especially along the banks of the Volga River, two-piece distaffs were more common. Instead of the blade, they had a comb, and their bases were decorated. After spinning, the distaff was taken apart and the base was hung on the wall as an ornament.

2. Accompanied a Russian woman throughout her life

A girl usually got her first small distaff at the age of six. Russian women did their spinning from the end of November until the end of winter, while there was no field work to do. During that long period, while spinning they’d tell each other fairy tales and sometimes invite musicians to play for them. 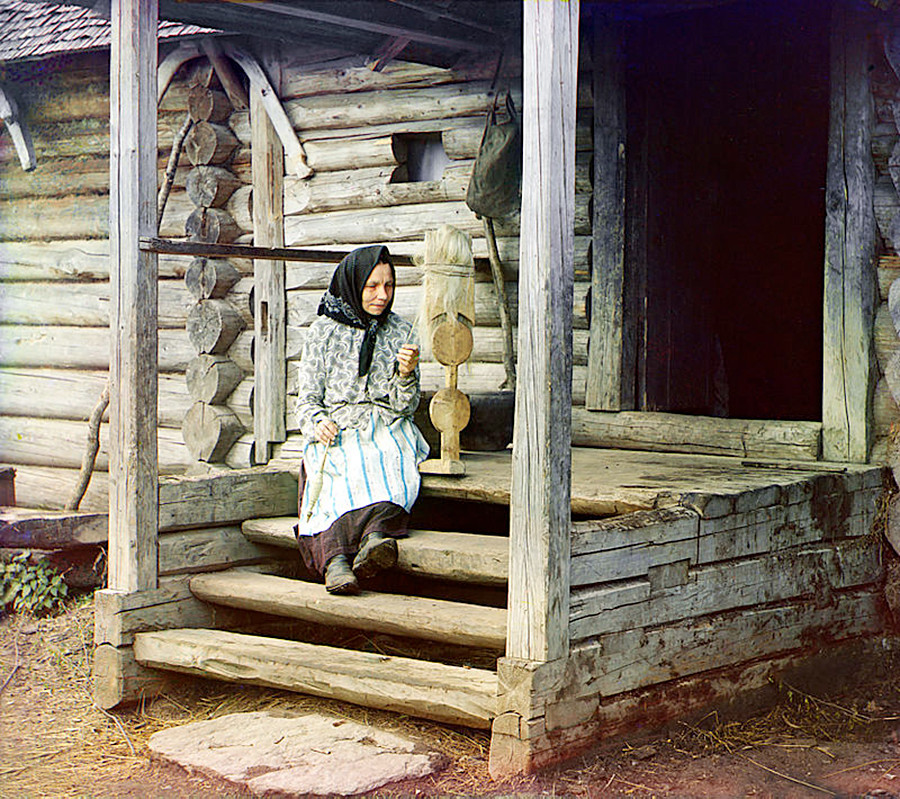 Young women often held special 'parties', to which they would come with their distaffs. There they could boast how beautifully painted theirs were. Young men from neighboring villages would come to these 'parties' in search of a bride. An expensive and richly decorated distaff could serve as an 'indicator' of a prospective bride's wealth.

Distaffs were sold at fairs and cost a lot of money (say, 5 rubles or more, which was the price of a new pair of leather shoes in the early 20th century). Parents bought a distaff for their daughter as a dowry, or it could be an expensive gift from the groom. Often, distaff blades carry signatures of the craftsmen who made them or inscriptions dedicated to someone special. 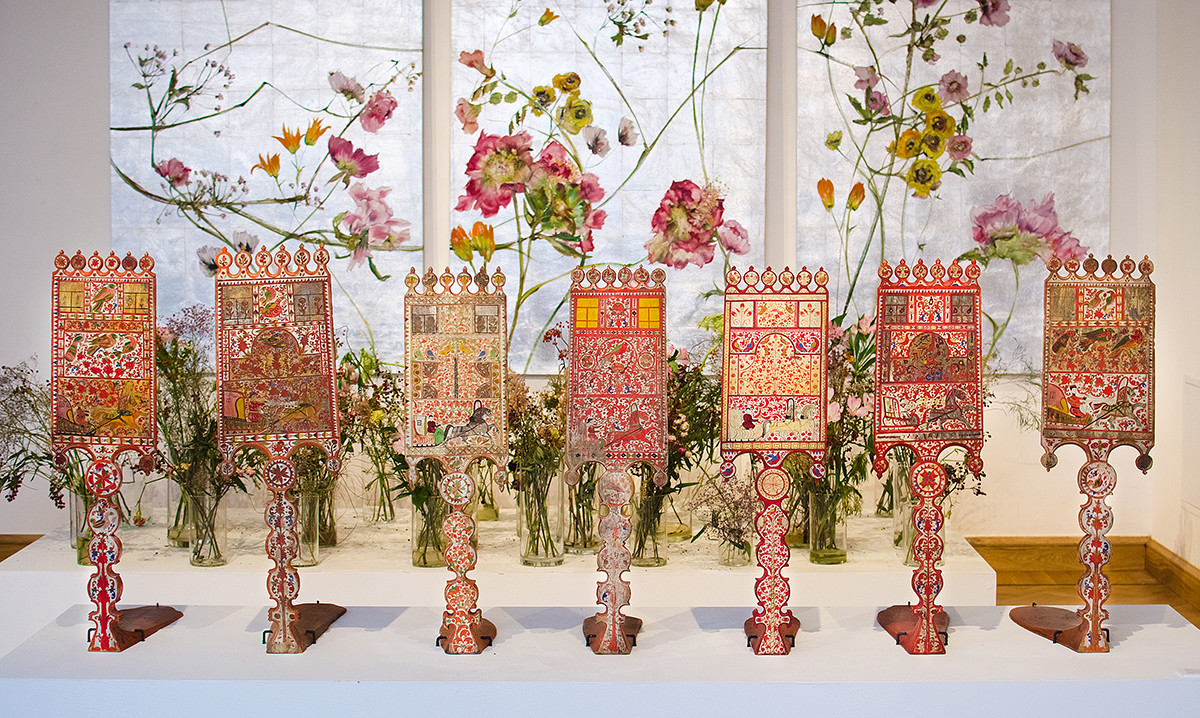 That is why distaffs, unlike other household items, were treated as legacy items and with much care. Also,  this is why they are often well preserved (and can be found in many Russian museums).

4. Three places in Russia famous for their painted distaffs

Almost all distaffs that have survived to this day and form part of museum collections were decorated by professional craftsmen and come from specific locations known for their artistic traditions. These are the three  best known location-specific artistic traditions: 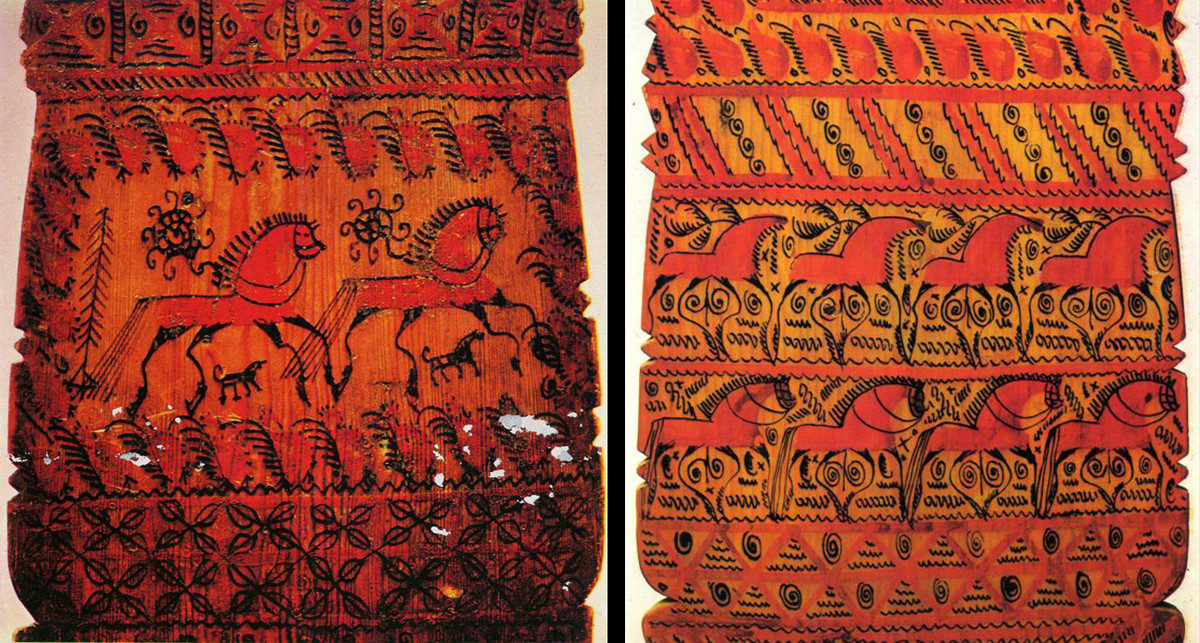 In the very north of Russia, on the Mezen River, the village of Palaschsherye is a place where craftsmen painted distaffs in the archaic style inspired by primitive rock paintings. Using soot and clay, they depicted running deer and other animals, as well as various geometric patterns. 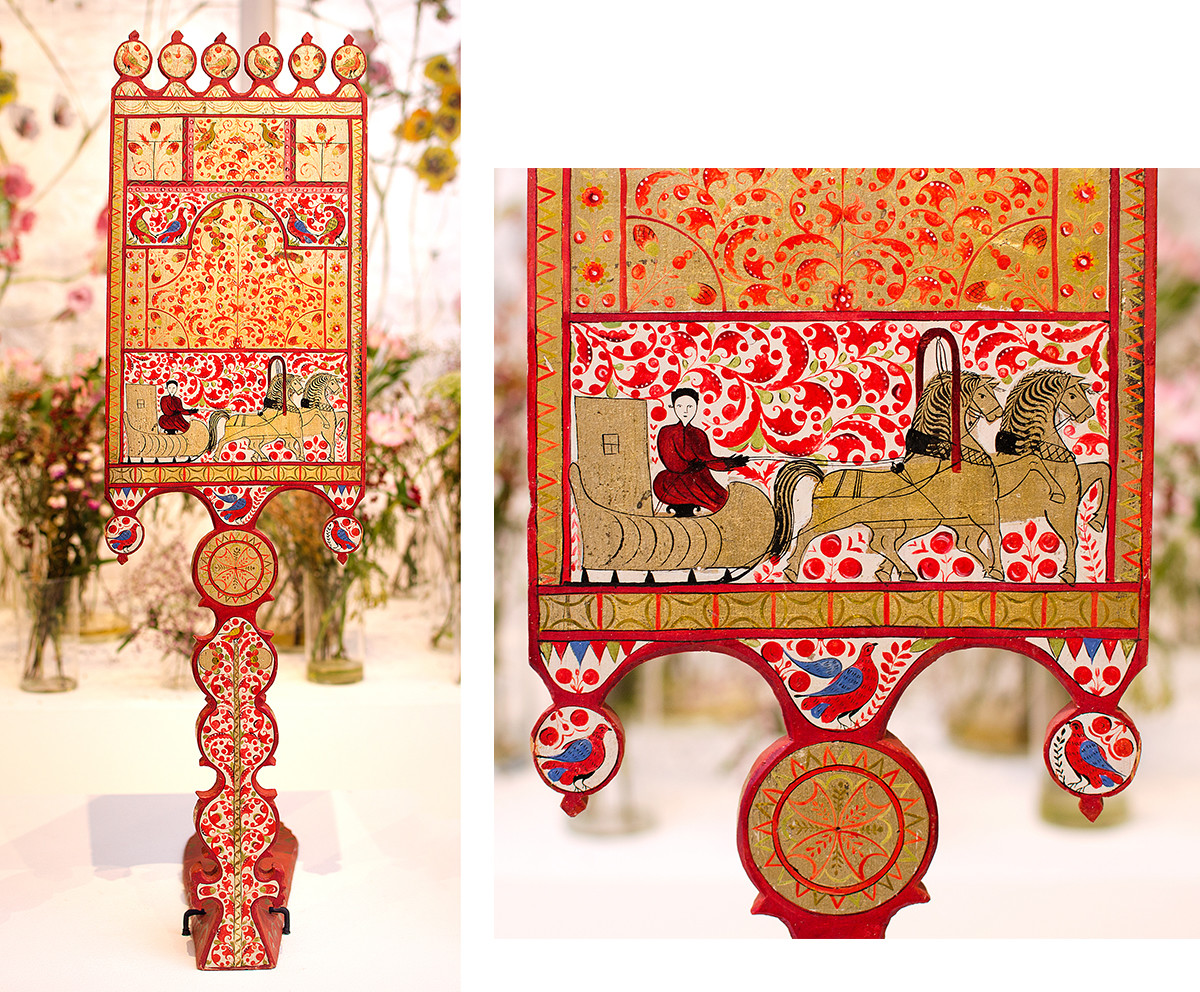 Another major center in the Russian north was the Northern Dvina River. The villages of Permogorye and Borok were home to entire dynasties of talented craftsmen. They often used gold leaf in their paintings, depicting floral ornaments, as well as the tree of life and birds of paradise. In addition, distaffs were often decorated with festive scenes and symbols, especially wedding carts. 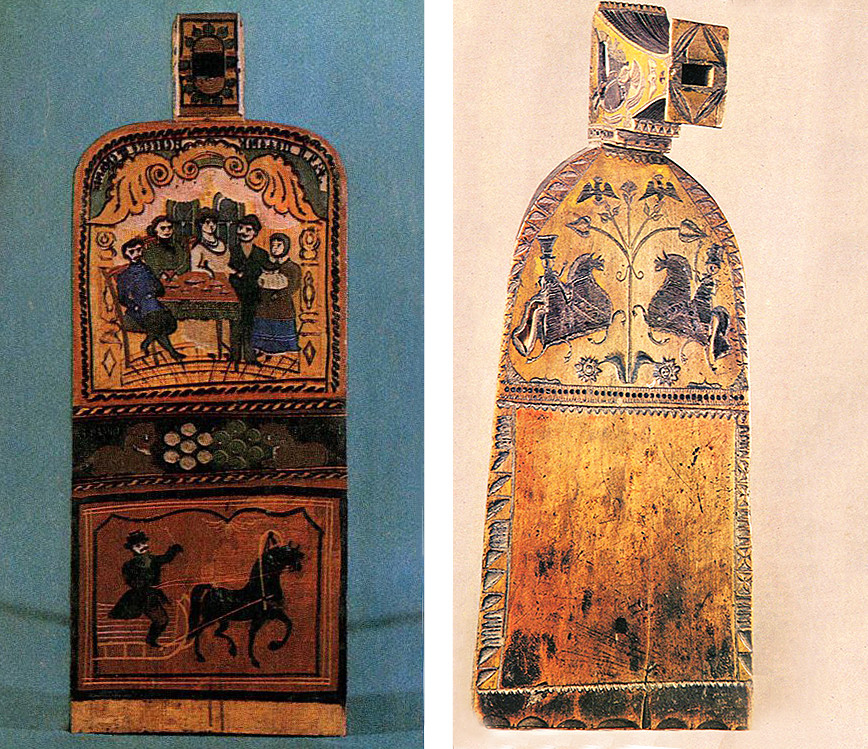 In the village of Gorodets on the Volga River in the 18th century craftsmen began to decorate distaffs with carvings. For inlays they used bog oak, whose trunks had a long time been submerged in river water and acquired a beautiful black color.

Today, distaffs are back in fashion, but now they are appreciated as a unique object of art and interior décor: many modern designers create wall objects using folk art motifs. 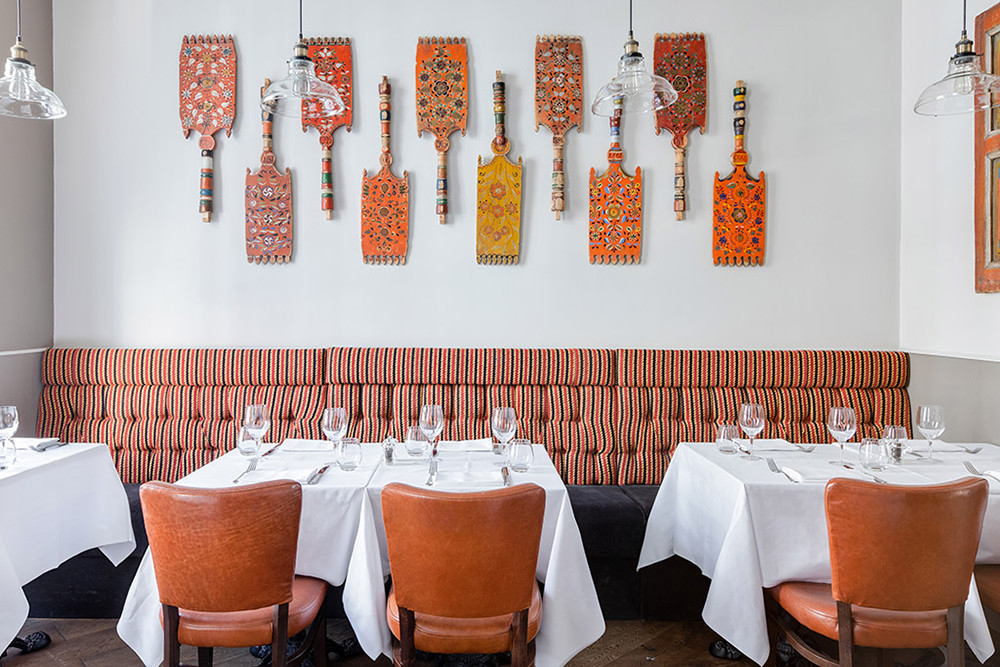 In the 1990s, museums stopped sending expeditions to the Russian North: a sufficient number of exhibits had already been collected. However, private individuals continued to seek out handicraft items, including decorated distaffs.

Famous antique collectors from Moscow, Alexei and Ksenia Nikitin, purchased their first distaff in Vologda Region in 2004, and now they have about 1,000 items in their collection. They organize exhibitions of household items throughout Russia.

Russia Beyond would like to thank the All-Russian Decorative Art Museum, which boasts one of the largest and most unique collections of folk art in Russia, and in particular Natalya Denisova, an art historian, deputy head of the museum's Education Center, for their help in preparing this article.