The nicknames of Russian tsars 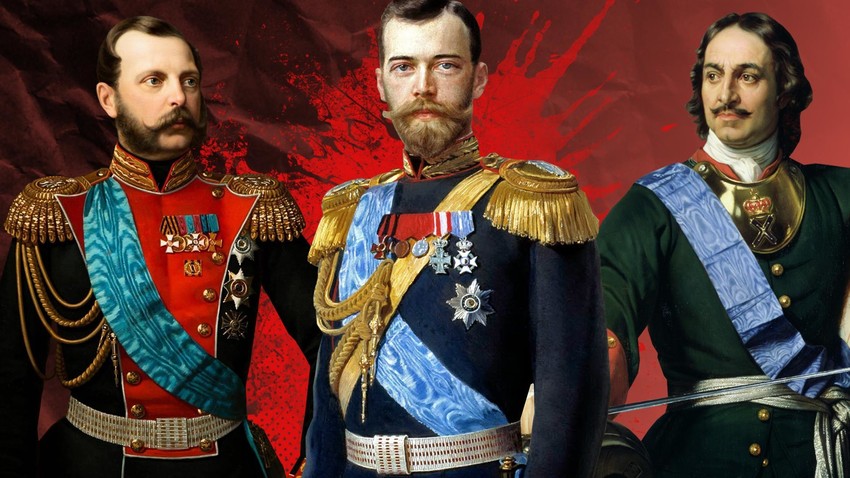 From the Terrible to the Bloodstained, we look at the 7 nicknames that the Russian tsars acquired during their lifetimes.

1. Ivan the Terrible – for the conquest of the Kazan Khanate 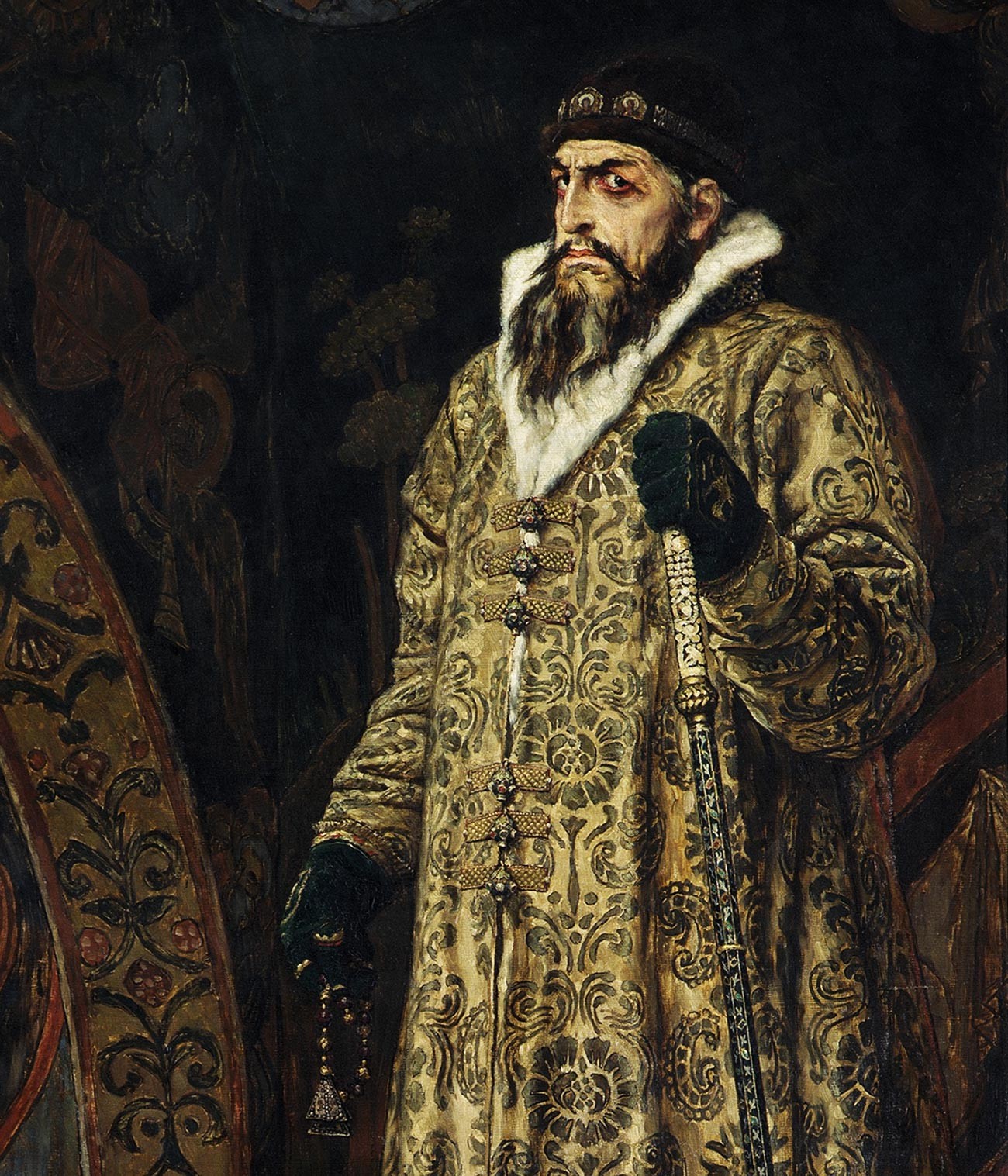 Groznyi (“The Terrible”), or, more correctly translated from Old Russian, “The Strong/The Menacing,” was an epithet that in the 15-16 centuries, didn’t carry negative connotations.

Grand Prince Ivan III of Moscow (1440-1505), the founder of the Moscow state and Ivan the Terrible’s grandfather, was the first man to be called “Ivan the Terrible” in Russia. With time, he came to be known as Ivan the Great, while “Ivan the Terrible” in reference to Ivan Vasilyevich IV of Moscow, the first Russian tsar (1530-1584) started appearing, Russian scholars say, in the second half of the 16th century (probably during Ivan’s lifetime) in Russian folk songs composed by unknown authors.

Ivan Vasilyevich gained his famous nickname, that noted his exceptional power as a ruler, after his conquests of the Kazan and Astrakhan Khanates, the Muslim states on the Russian borders that menaced the Russian lands. Later in Russian history, his nickname came to be associated with his alleged cruelty.

2. Alexey Mikhailovich the Humblest – for piety 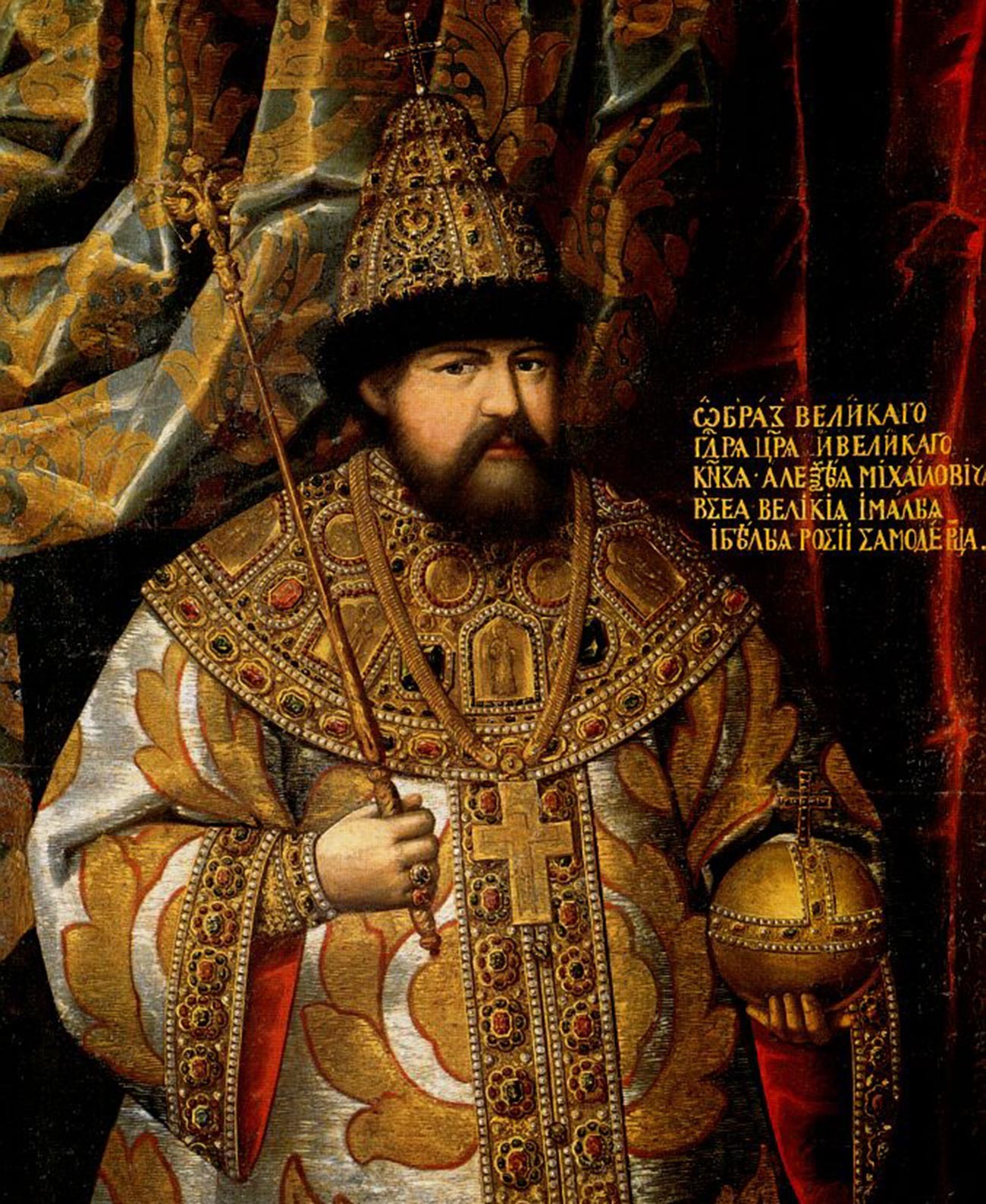 Alexei Mikhailovich (1629-1676), known as Alexis of Russia, is still remembered by his moniker Tishayshiy (“The Most Quiet”), which, in Old Russian, meant “The Humblest,” “The Most Pious.”

Indeed, this tsar was famed for his strictest adherence to the Russian Orthodox rituals. He kept fast on Mondays, Wednesdays, and Fridays, spent hours daily in prayers, regularly made pilgrimages to the holy cloisters of the land with his family, and sent generous alms to churches and priests.

However, his temper was fierce, his mind curious and inventive, contrary to his overall piety. It was Tsar Alexei who really turned Russia to the West and laid the foundations of the major reforms his son, Peter the Great, introduced in Russia.

3. Peter and Catherine – the Greats, by the decision of the government 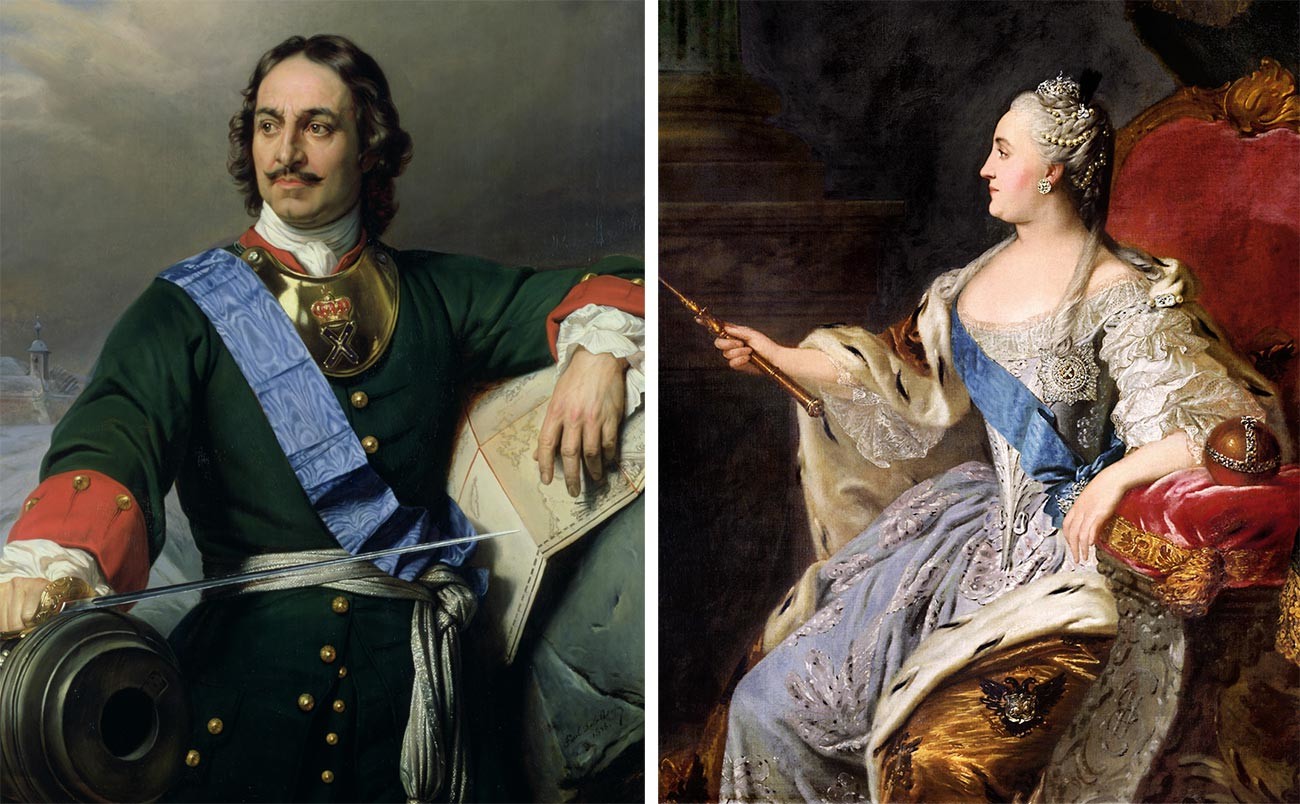 Tsar Peter (1672-1725) became the first Russian Emperor on October 22, 1721, after decisively winning the Great Northern War over Sweden. The Governing Senate and the Most Holy Governing Synod, the governing bodies of civil and religious powers in Russia of the time, ceremonially “presented” the Emperor’s title, and the moniker “The Great” to Peter in a way the Roman Senate honored their Emperors. Since that moment, Russia has also become the Russian Empire.

For Catherine II (1729-1796), the title “The Great” was given officially by the All-Russian Legislative Commission convened in 1767 for the purpose of replacing the mid-17th-century Muscovite code of laws with a modern law code. Although the Commission didn’t reach its goal and was dissolved about a year later, Catherine, in fact, didn’t object being dubbed “The Great” by her aides and servants, since that title connected her to Peter the Great, a monarch she said she modeled her way of governing after.

However, in reply to the Legislative Commission’s address which declared her “The Great,” Catherine wrote: “Let the time and the posterity judge my deeds impartially.”

4. Alexander I the Blessed – for the victory over Napoleon 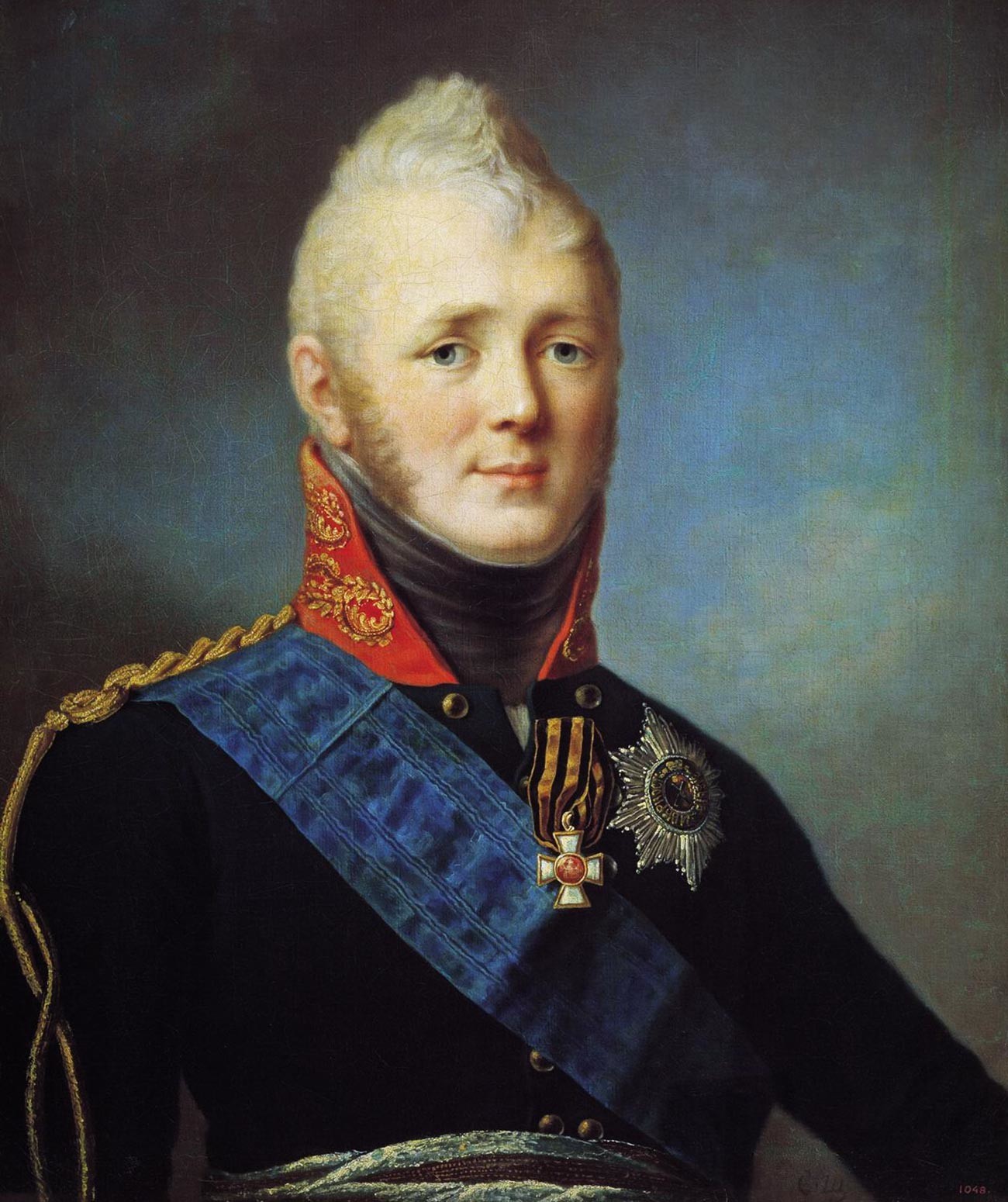 In a fashion similar to the presenting of “The Great” titles to Peter and Catherine, in 1814, the Governing Senate of the Russian Empire officially bestowed the title of Blagoslovennyi (“The Blessed”) on Emperor Alexander I (1777-1825). His full honorary title was “The Blessed, The Magnanimous Restorer of the States,” because it was given to honor the victory over Napoleon Bonaparte and the restoration of the European monarchies subdued by Napoleon.

However, during the War of 1812, Alexander didn’t take up the position of the Commander in Chief, trusting it first to Michael Andreas Barclay de Tolly (1761-1818) and then to Mikhail Kutuzov (1745-1813). Nevertheless, in public opinion, he was rightfully perceived as the victor of Napoleon. 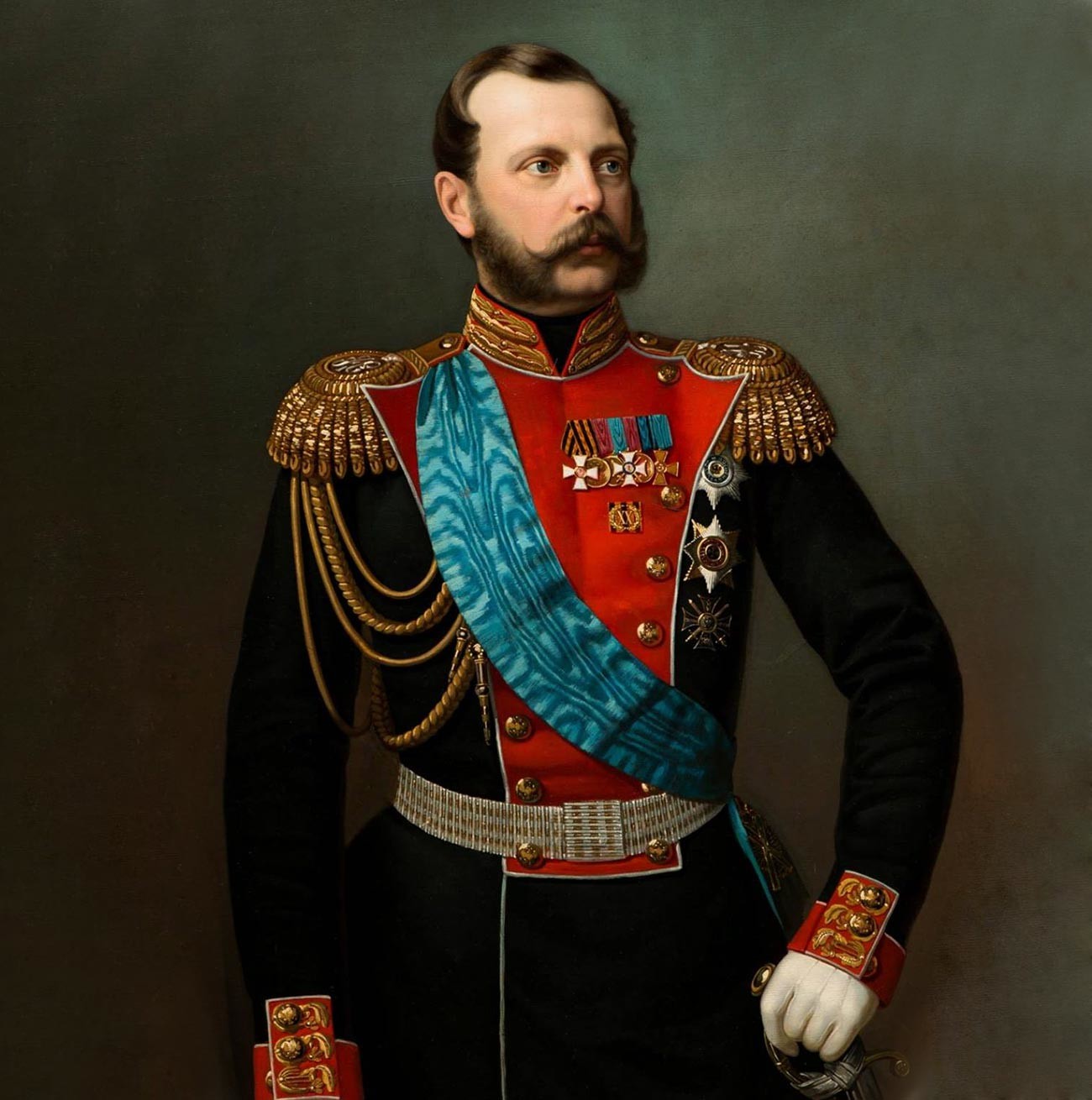 The liberation of serfs in Russia that happened in 1861 during the reign of Alexander II (1818-1881) wasn’t, however, a very popular and effective reform – it pauperized the peasantry and caused multiple riots. By the end of the 1870s, the country was bustling with protests and terrorist attacks.

In 1877-1878, Russia opposed the Ottoman Empire in the war to liberate the peoples of the Balkan states (Bulgaria, Romania, Serbia, and Montenegro) from the oppressive Ottoman regime. Russia won decisively. According to the Treaty of Berlin (1878), that finalized the war and was signed by the major European powers, a part of Bulgaria, and also Montenegro, Serbia, and Romania became independent from the Ottomans, which were pushed from Europe. In the Balkans, Alexander II of Russia became then known as the Liberator, and this title was also widely propagated in the Russian Empire.

Three years later, Alexander II was murdered by the terrorists, because in domestic policy, he definitely failed.

6. Alexander III the Peacemaker – for not engaging in wars during his reign 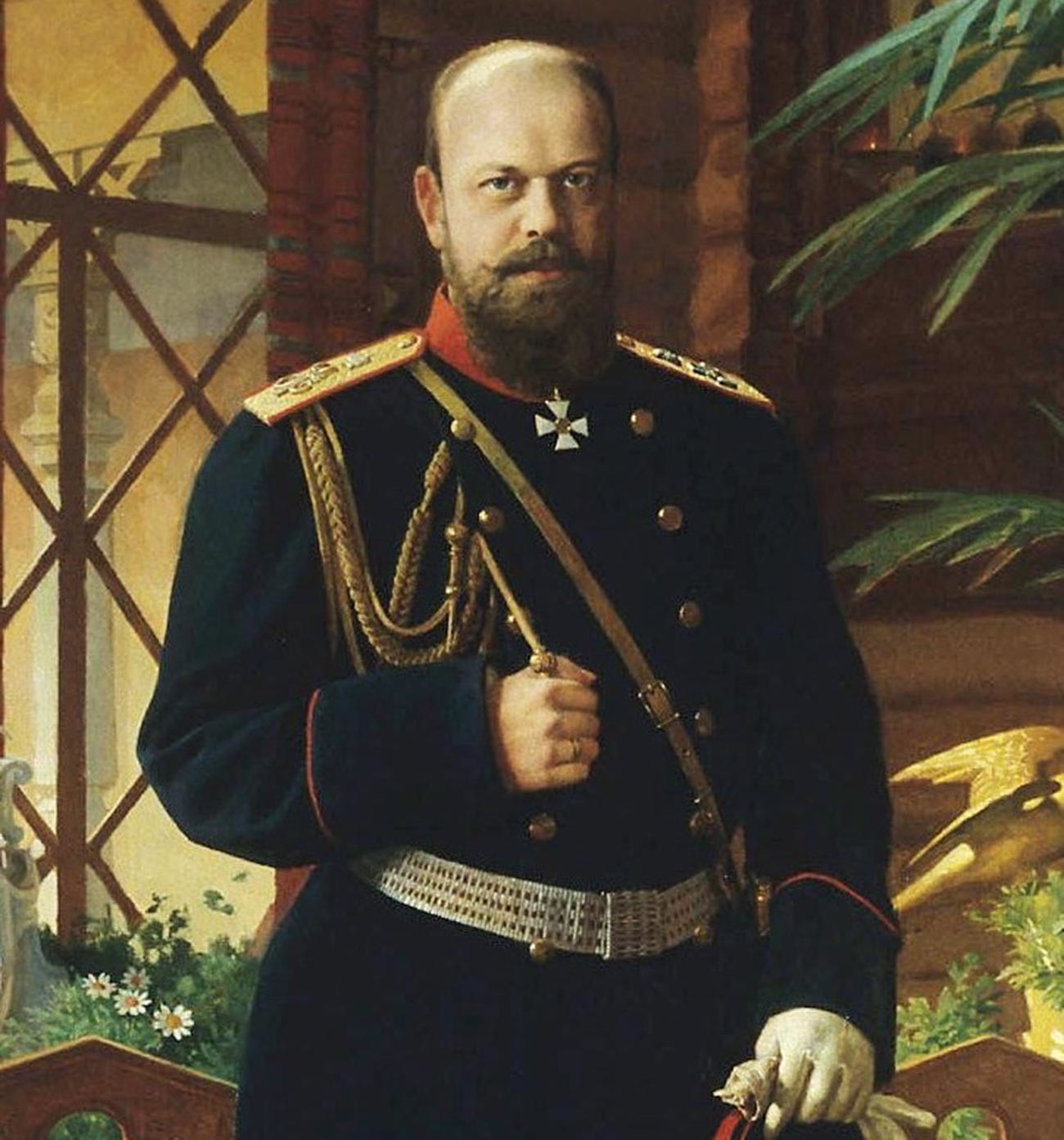 Alexander II’s son, Alexander III (1845-1894) took the throne after one of the most disastrous events in the history of the Romanov dynasty in general – his father was blown up by the terrorists. He imposed a harsh internal policy and conservative measures aimed to calm, control, or violently suppress any protests.

In the foreign policy accordingly, Alexander stopped the practice of clandestine two-party treaties with European countries because such treaties inevitably lead to international conflicts. By employing a non-interference foreign policy, Alexander III saved a great lot of Russian lives that had not been lost to wars. He was named “The Peacemaker” during the last years of his reign.

7. Nicholas II the Bloodstained – for his cruelty 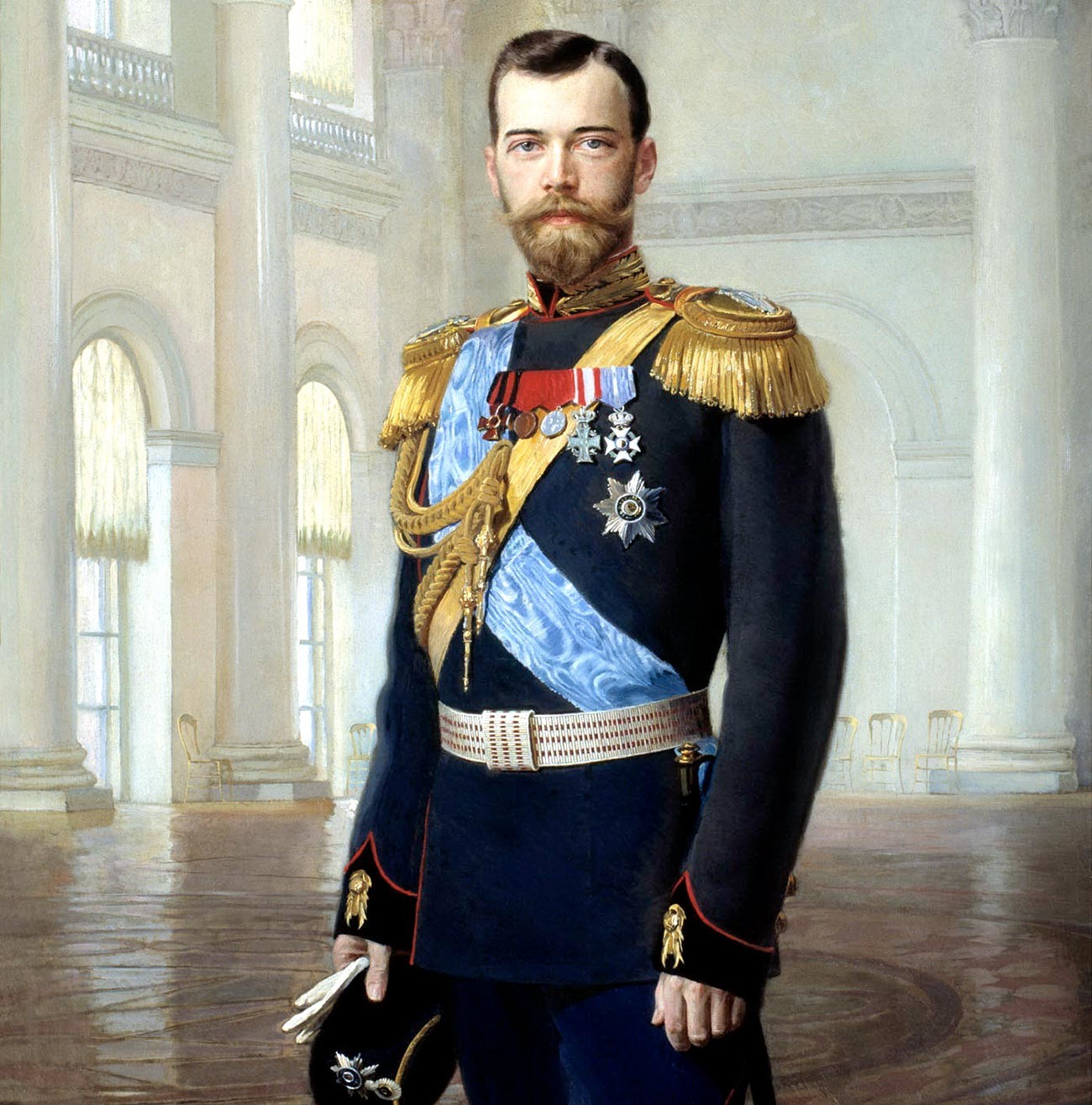 The coronation of Nicholas II (1868-1918) in Moscow in May 1896 was to be followed by a mass celebration on the Khodynka field, where thousands gathered and stampeded each other to death in the rush for free giveaways. Stupidly organized by the Moscow authorities, the Khodynka tragedy later named the Bloody Sunday resulted in the death of 1389 people. This grim event marked the beginning of the last tsar’s reign, but Nicholas became the Krovavyi (“Bloodstained”) not because of that.

The Revolution of 1905 in Russia began shortly after Bloody Sunday, January 9, 1905, when peaceful protesters were fired at by the soldiers of the Imperial Guard, killing dozens. Vladimir Lenin called Nicholas “The Bloodstained” right after that in 1905, in his articles in the revolutionary Russian press (published abroad) and agitational leaflets.

But after the Revolution, Nicholas II was dubbed “The Bloodstained” even by his own supporters. Nicholas further strengthened the regime, giving more absolute power to local authorities and judges, which led to a great number of totally illegitimate and government-biased court processes. In December 1910, Vladimir Purishkevich, an ultra-right pro-monarchist politician, called Nicholas II “The Bloodstained'' in his speech at the State Duma, ignited by the violent suppression of a student riot in the St. Petersburg University.

The next day, the newspapers that published Purishkevich’s words were confiscated; but through the press, the nickname inevitably leaked into the masses, much wider than the audience of Lenin’s articles; since 1910, “The Bloodstained” has stuck as a nickname used by Nicholas II’s fierce enemies and made it on into the 20th century because it was widely used by the Communist anti-monarchist historical propaganda.