How the Red Army managed to defend Leningrad during WWII (PHOTOS) 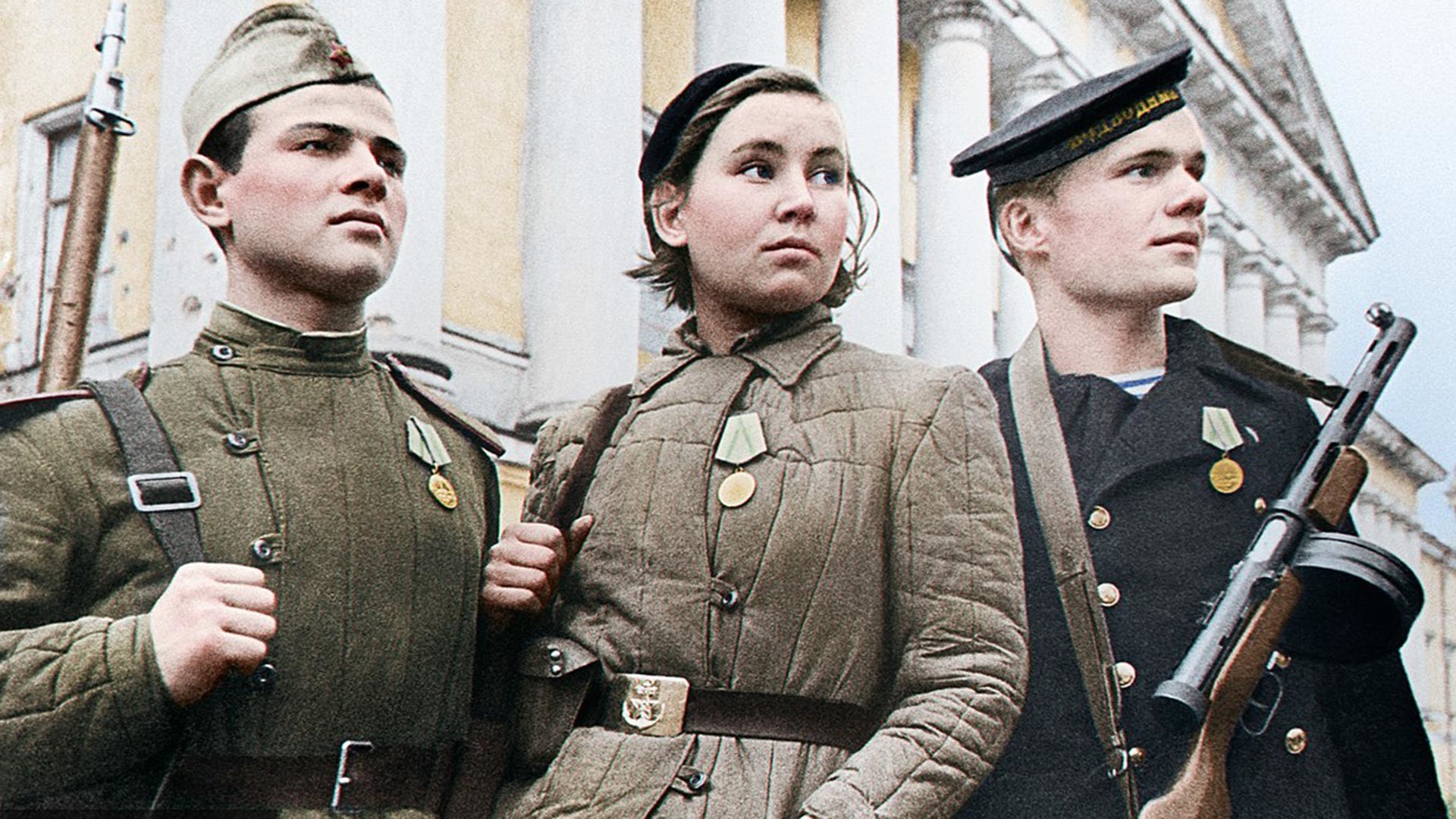 Boris Kudoyarov, colorized by Julius Jääskeläinen
One of the longest and most terrible sieges in world history claimed the lives of more than a million residents of the second most important city in the Soviet Union.

“The Fuehrer is unshakeable in his decision to raze Moscow and Leningrad to the ground in order to completely get rid of the population of these cities, whom otherwise we would be forced to feed during the winter...,” chief of staff of the Army High Command Franz Halder wrote in his diary on July 8, 1941, at the very start of Operation Barbarossa. As a result of a rapid advance of Army Group North through the Baltic republics, the enemy approached Leningrad as early as the summer of 1941. In the meantime, the Finnish army was approaching the city from Karelia. 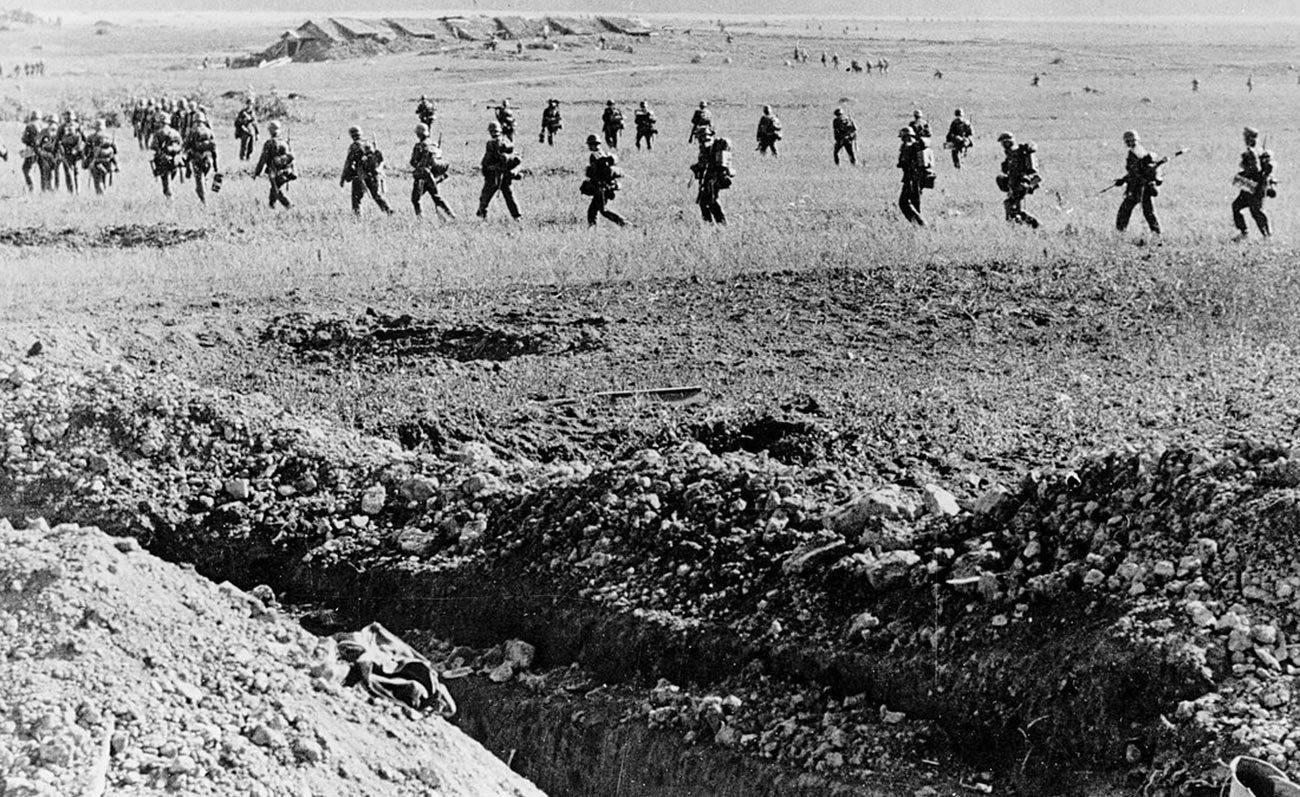 On September 8, 1941, the German troops captured the town of Shlisselburg on the shores of Lake Ladoga, thus encircling Leningrad from land. Trapped in the Soviet Union’s second largest city were about half a million Soviet troops, almost all the ships of the Baltic Fleet and up to three million civilians. 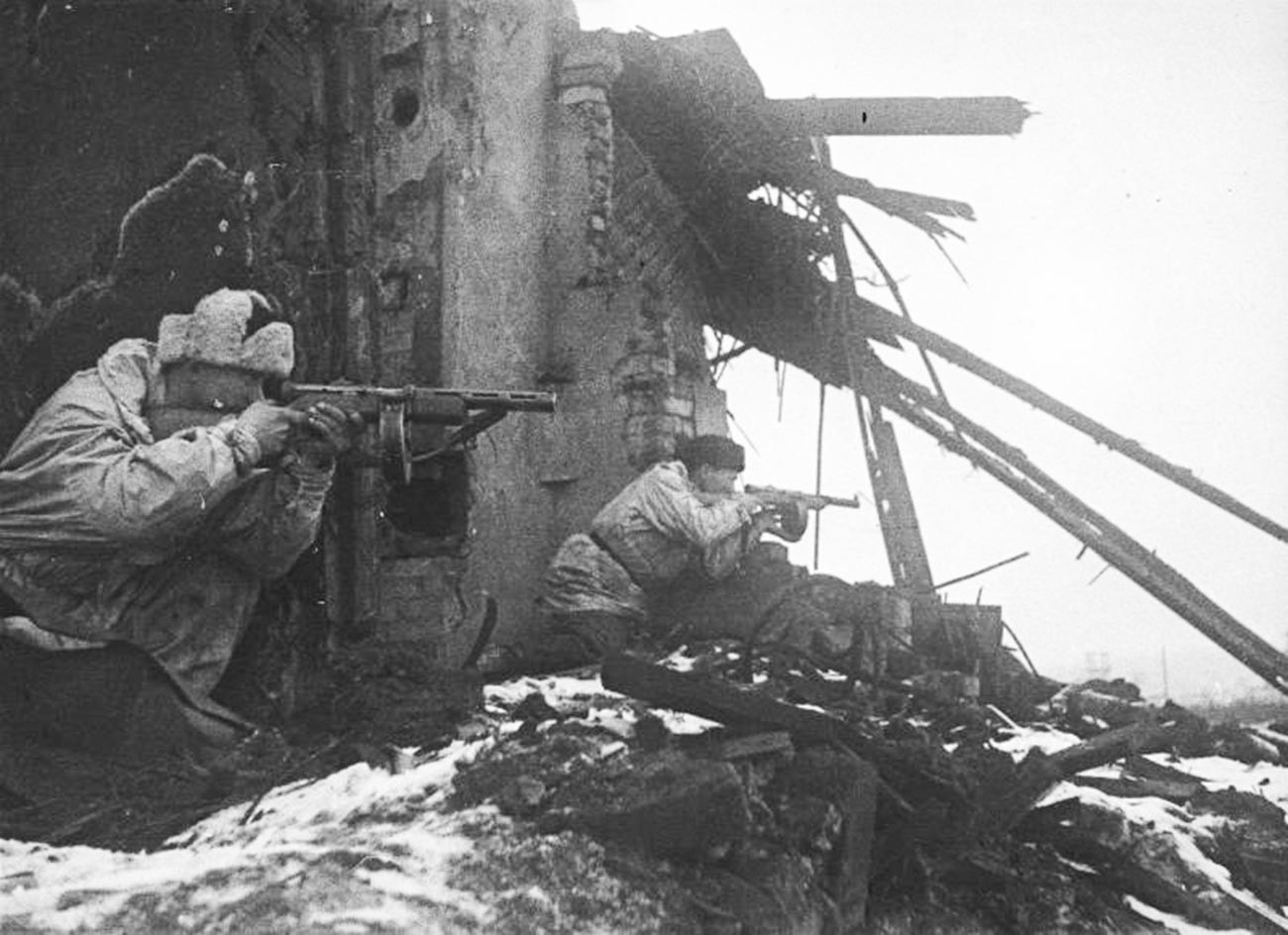 Nevertheless, an attempt to storm the city that soon followed failed. By mid-September, Leningrad was turned into a fortress. Over 600 km of anti-tank ditches and wire obstacles, 15,000 pillboxes and bunkers, 22,000 firing points, 2,300 command and observation posts were deployed on the approaches to the city. In Leningrad itself, 4,600 bomb shelters were set up, capable of accommodating up to 814,000 people. The entire city center was covered with camouflage nets to protect against enemy aircraft. 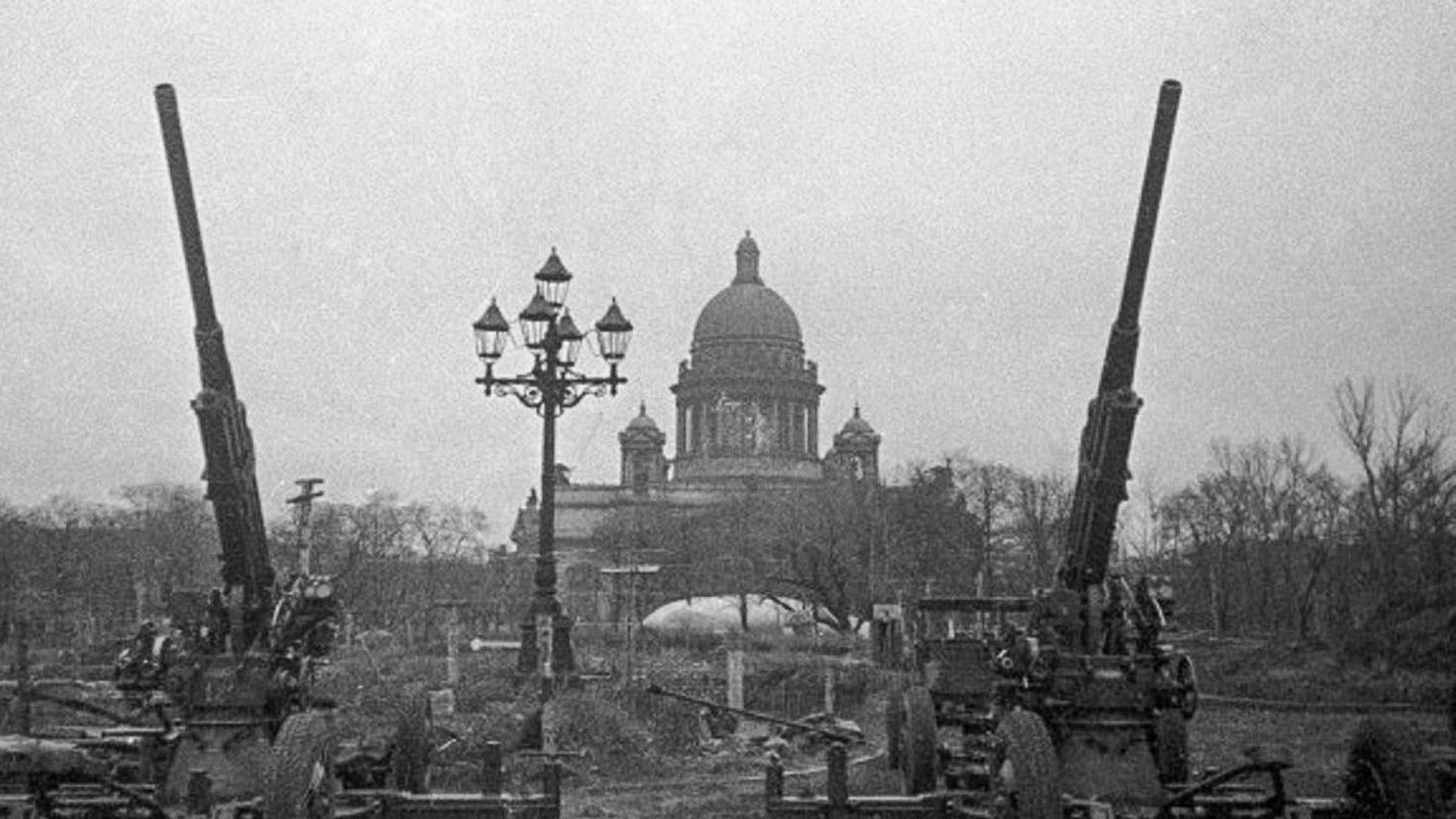 The only thread connecting besieged Leningrad with the “mainland” was a route along Lake Ladoga, which became known as the ‘Road of Life’. Along it, food was delivered to the city and people evacuated from it. In an attempt to destroy this last link, the Germans broke through to the Svir River, where they hoped to join forces with the Finnish troops. On November 8, they seized the town of Tikhvin, thus cutting off the only railway link along which goods for Leningrad were delivered to the eastern shore of Lake Ladoga. As a result, the already meager rations that the city’s residents were receiving had to be reduced still further. However, thanks to the fierce resistance of the Red Army, the enemy’s plans were thwarted and Tikhvin was recaptured a month later. 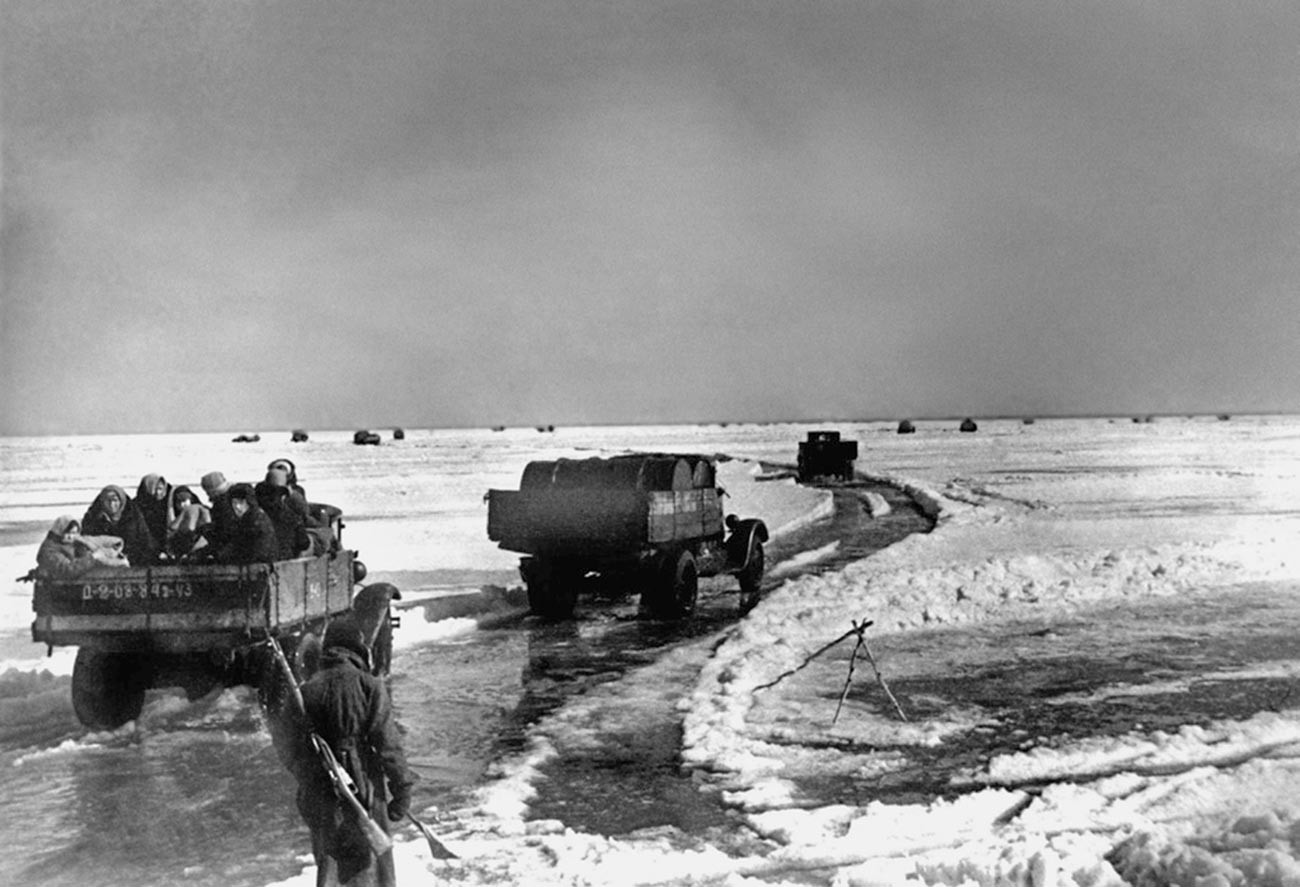 The ‘Road of Life’ along Lake Ladoga.

And yet, limited deliveries by air and along Lake Ladoga could not cover the needs of a large city like Leningrad. Soldiers on the front line received 500 grams of bread a day, workers up to 375 grams, and dependents and children just 125 grams. With the onset of the harsh winter of 1941-1942, famine began. “Everything was eaten: leather belts and soles, not a single cat or dog remained in the city, let alone pigeons and crows. There was no electricity and the only source of water was the Neva, so hungry and exhausted people often dropped dead on their way to the river to fetch some water. Nobody removed the dead bodies anymore, they were just left lying in the streets and getting covered by drifting snow. Whole families were dying at home, whole apartments,” Yevgeny Alyoshin recalled. 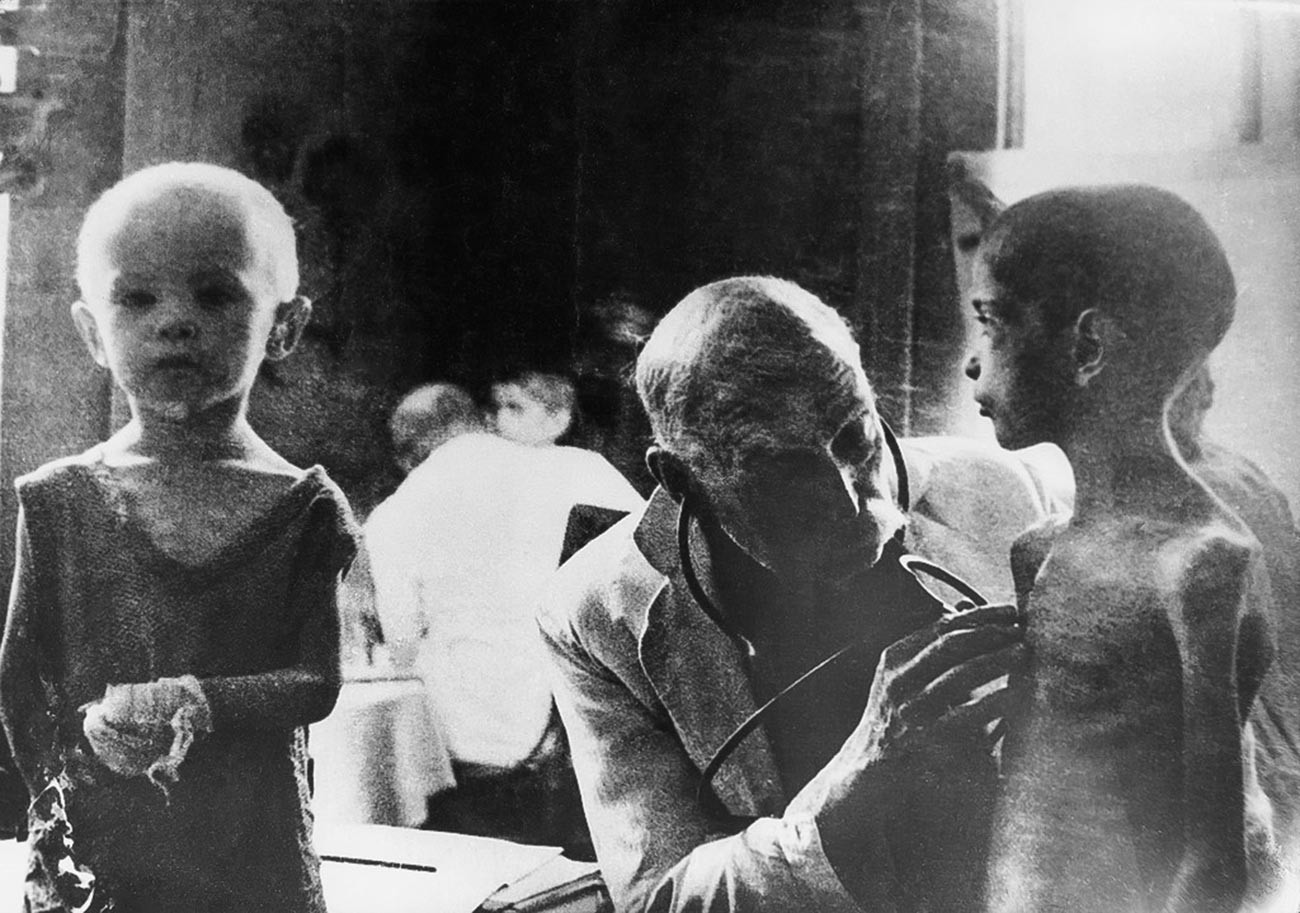 Some did not stop at pets and birds. The NKVD recorded more than 1,700 cases of cannibalism. Unofficial figures were even higher. Corpses were stolen from morgues, cemeteries or lifted straight from the streets. There were also murders of living people. A report by Leningrad Region directorate of the NKVD dated December 26, 1941 says: “On December 21, V.F. Vorobyov, 18, unemployed, killed his grandmother Maksimova, 68, with an ax. He chopped the body into pieces, liver and lungs, boiled and ate them. Body parts were found during a search of the apartment. Vorobyov testified that he had committed the murder out of hunger. An expert assessment found that Vorobyov was sane.” 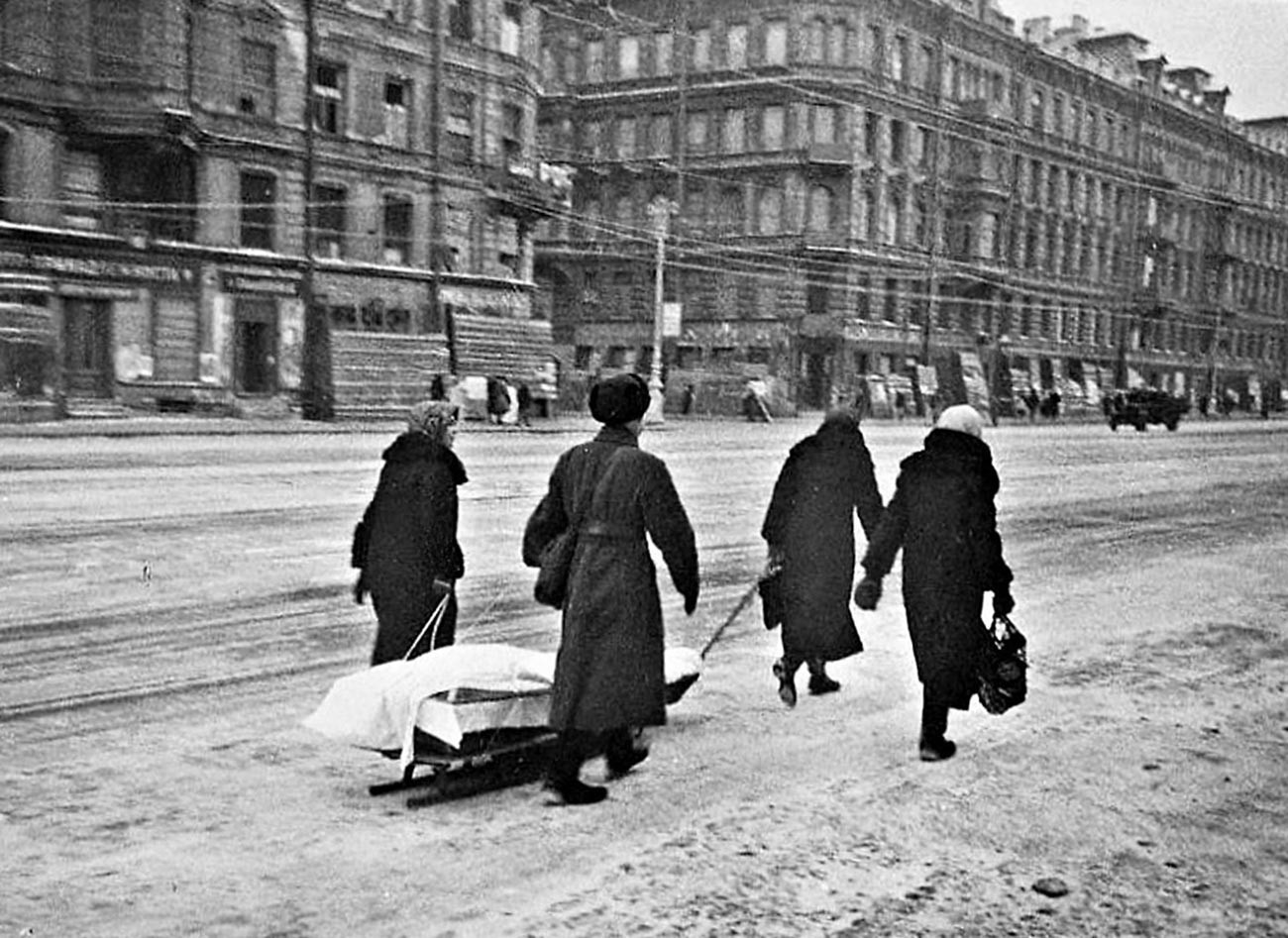 In the spring of 1942, Leningrad began to gradually return to a semblance of normal life after the nightmare of the winter it had just lived through: in the suburbs that remained unoccupied, kitchen gardens were set up to grow vegetables, food provisions improved, mortality dropped and even the operation of public transport was partially resumed. In an important and inspiring development, a partisan convoy arrived in the city from the occupied Novgorod and Pskov regions. Having covered hundreds of kilometers behind the enemy lines, on March 29 the partisans broke through the front line to Leningrad, delivering 223 carts with 56 tons of flour, grain, meat, peas, honey and butter for residents of the city. 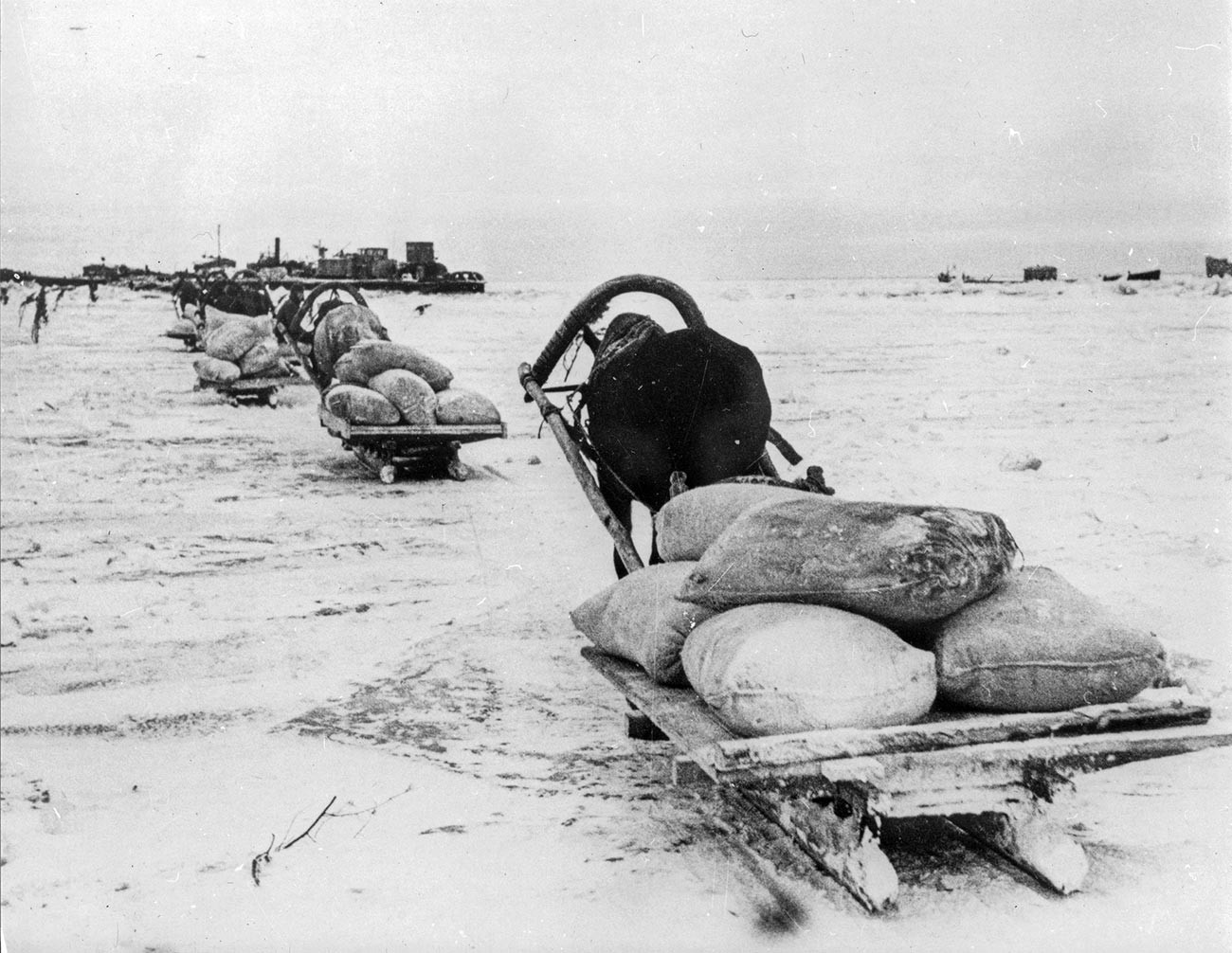 From the very first days of the siege, the Red Army never stopped its attempts to break through to the city. However, all the four big offensive operations carried out in 1941-1942 ended in failure: there was not enough people, resources, or combat experience. “We attacked on September 3-4 from the Chernaya River on Kelkolovo,” recalled deputy commander of the 939th regiment Chipyshev, who took part in the Sinyavino operation in 1942, “without artillery support. The shells sent for the battalion guns did not fit our 76 mm guns. There were no hand grenades. The machine guns in German pillboxes remained unsuppressed and the infantry suffered huge losses.” And yet, these attacks did not leave the enemy unscathed either: the constant pressure from the Soviet troops exhausted Army Group North greatly, limiting its room for maneuver. 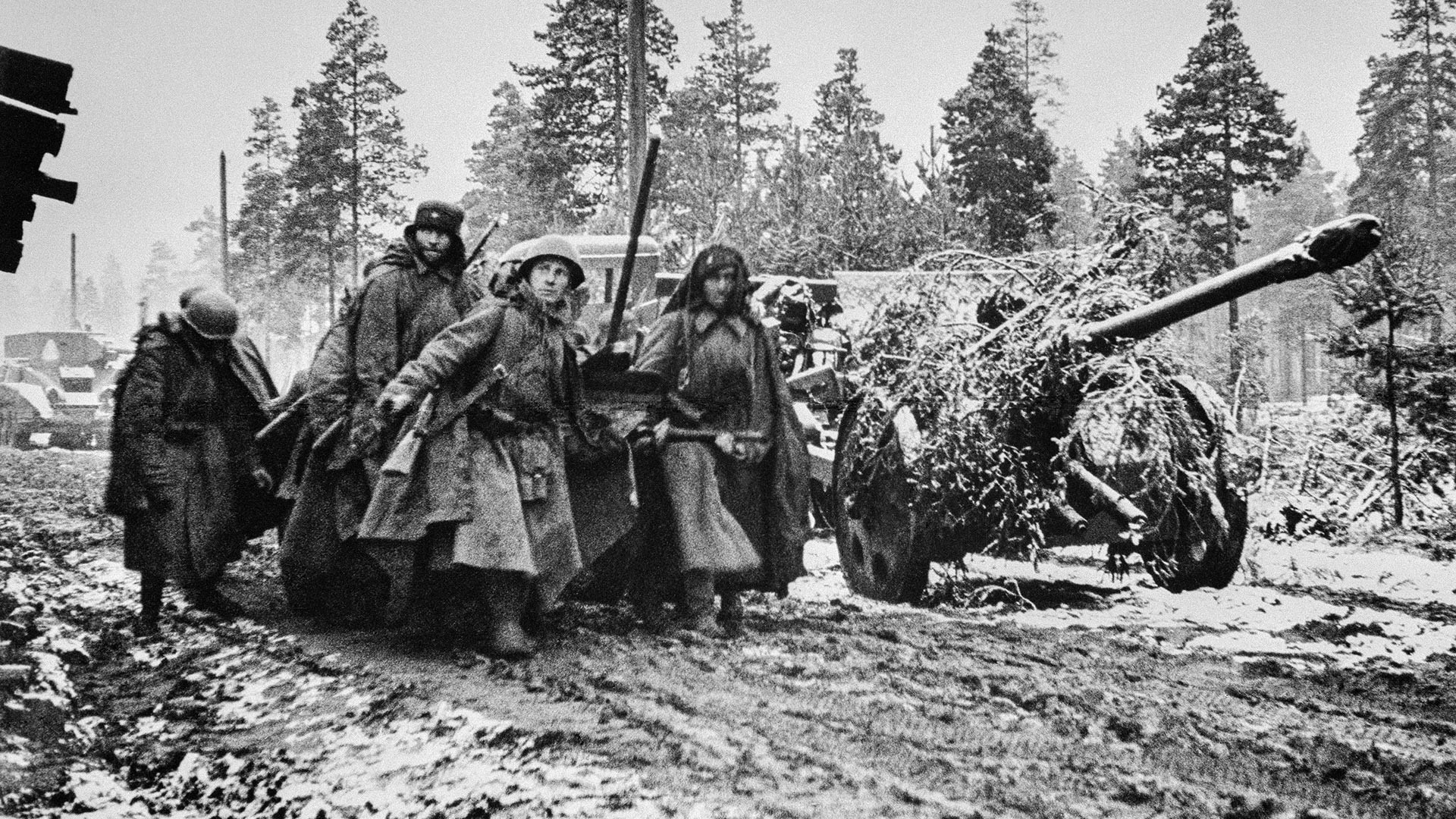 Red Army soldiers during the 2nd Sinyavinskaya offensive operation in 1942.

After the defeat of the German troops at Stalingrad, the initiative in the war began to gradually pass to the Red Army. On January 12, 1943, the Soviet command launched the Iskra offensive, which finally ended in success. The Soviet troops liberated the city of Shlisselburg and cleared the southern shore of Lake Ladoga, thus restoring Leningrad's land communications with the “mainland”. 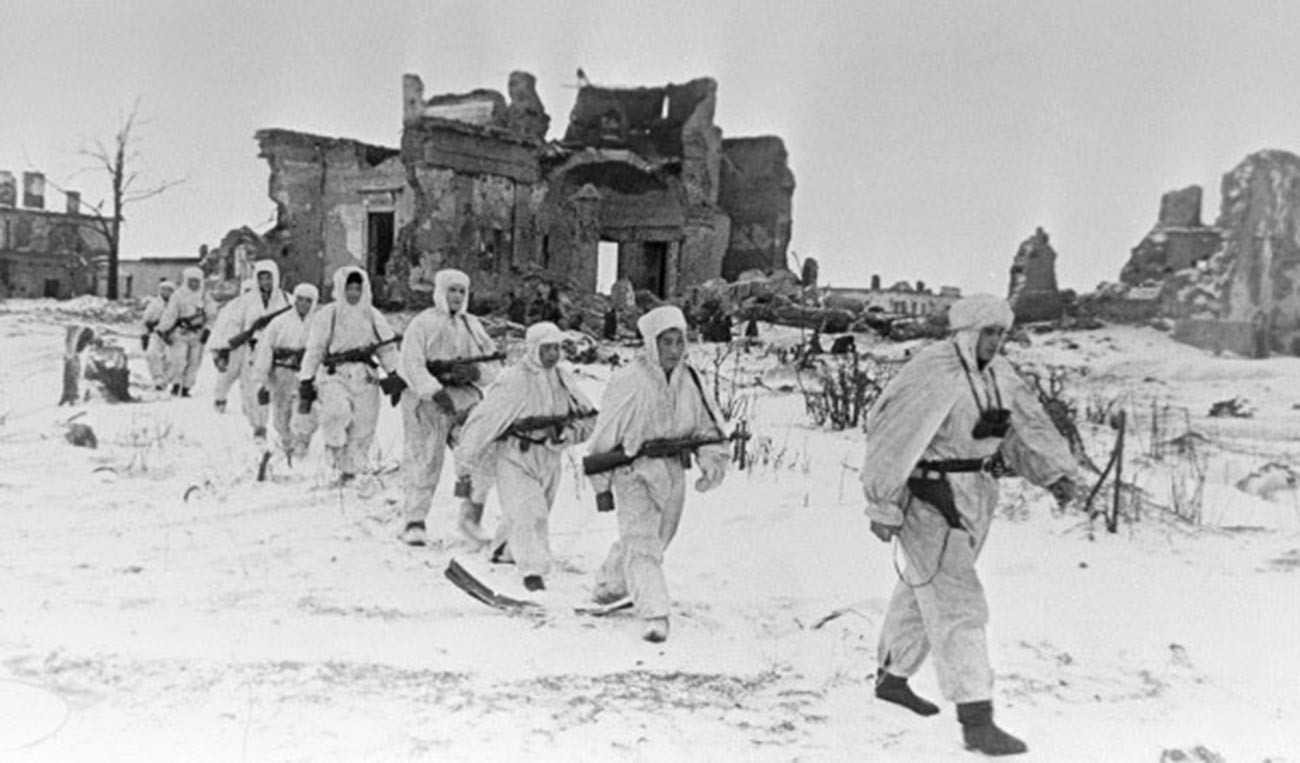 “I think it was on January 19, 1943, I was about to go to bed when at eleven o’clock I heard that the radio suddenly came alive,” nurse Ninel Karpenok recalled. “I came closer and heard that, indeed, the radio was saying: ‘Listen to the notification.’ So we started listening. And suddenly they announced that the siege had been lifted. Oh! We ran out of the room. We lived in a communal apartment, four families in four rooms. And we all ran out of our rooms, and started screaming and weeping. Everybody was so happy: the siege was over!” 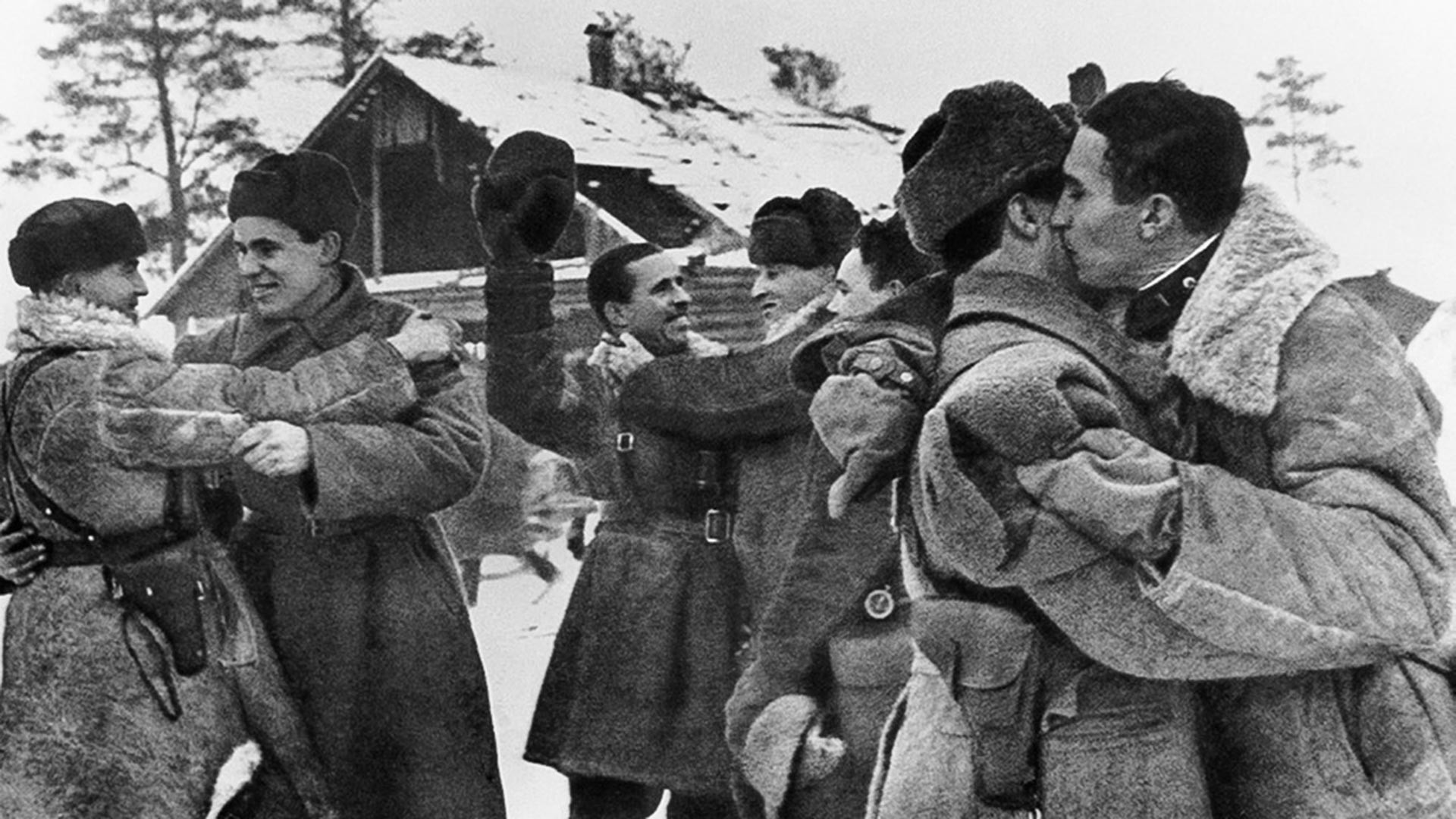 "The siege is over!”

A year later, during Operation January Thunder, having thrown the enemy 100 km away from Leningrad, the Soviet troops finally put an end to any enemy threat to the city. January 27 was officially declared the day of the lifting of the siege, which was marked by 24 volleys from 324 guns. During the 872 days of the Siege of Leningrad, hunger, cold, artillery attacks and air raids killed - according to various estimates - from 650,000 to one and a half million residents of the city. 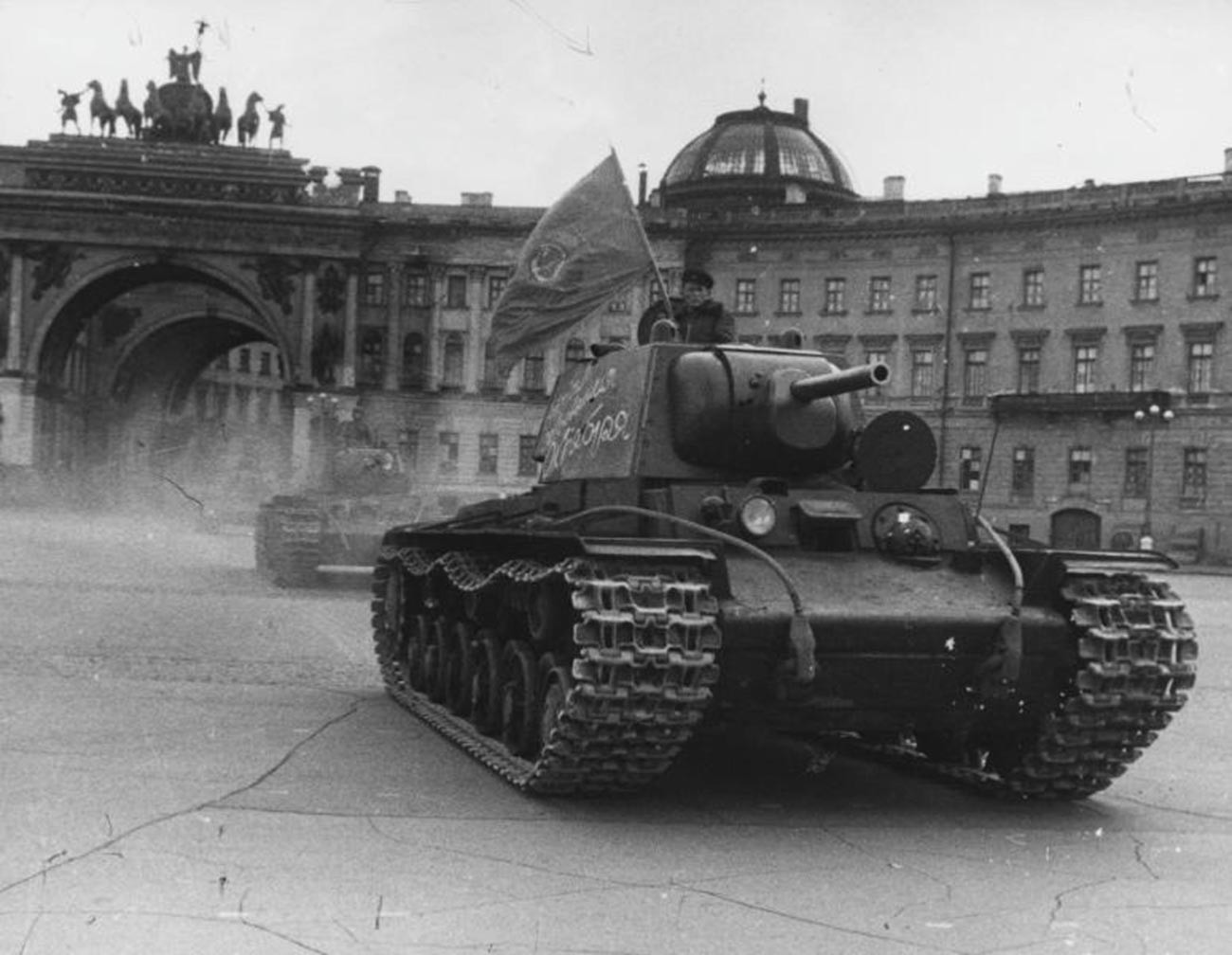