What toys did Russian peasant children play with? 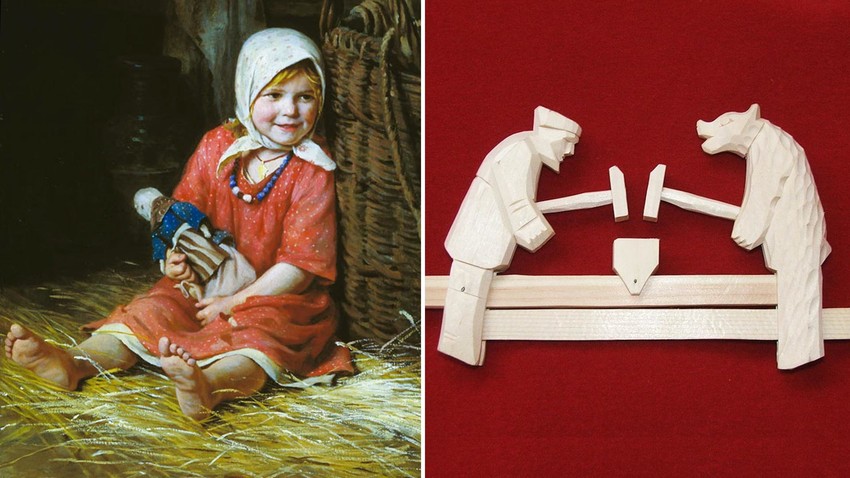 Karl Lemokh; Eugene Zelenko (CC BY-SA 4.0)
To a modern Russian, the names of most of these toys are meaningless and survive only as part of some set phrases, the origins of which have been lost in time. And yet, over the centuries, these toys helped entertain and develop countless generations of Russian children. Let's discover some of them.

What unites all traditional Russian toys is their simplicity and low cost. Parents made such toys for their children from whatever material they could find and in the little free time they had. The techniques for making these toys were passed down from parents to children and were perfected over the centuries. Any father could carve a horse for his son or a doll for his daughter, which she could then dress up in scraps of cloth. 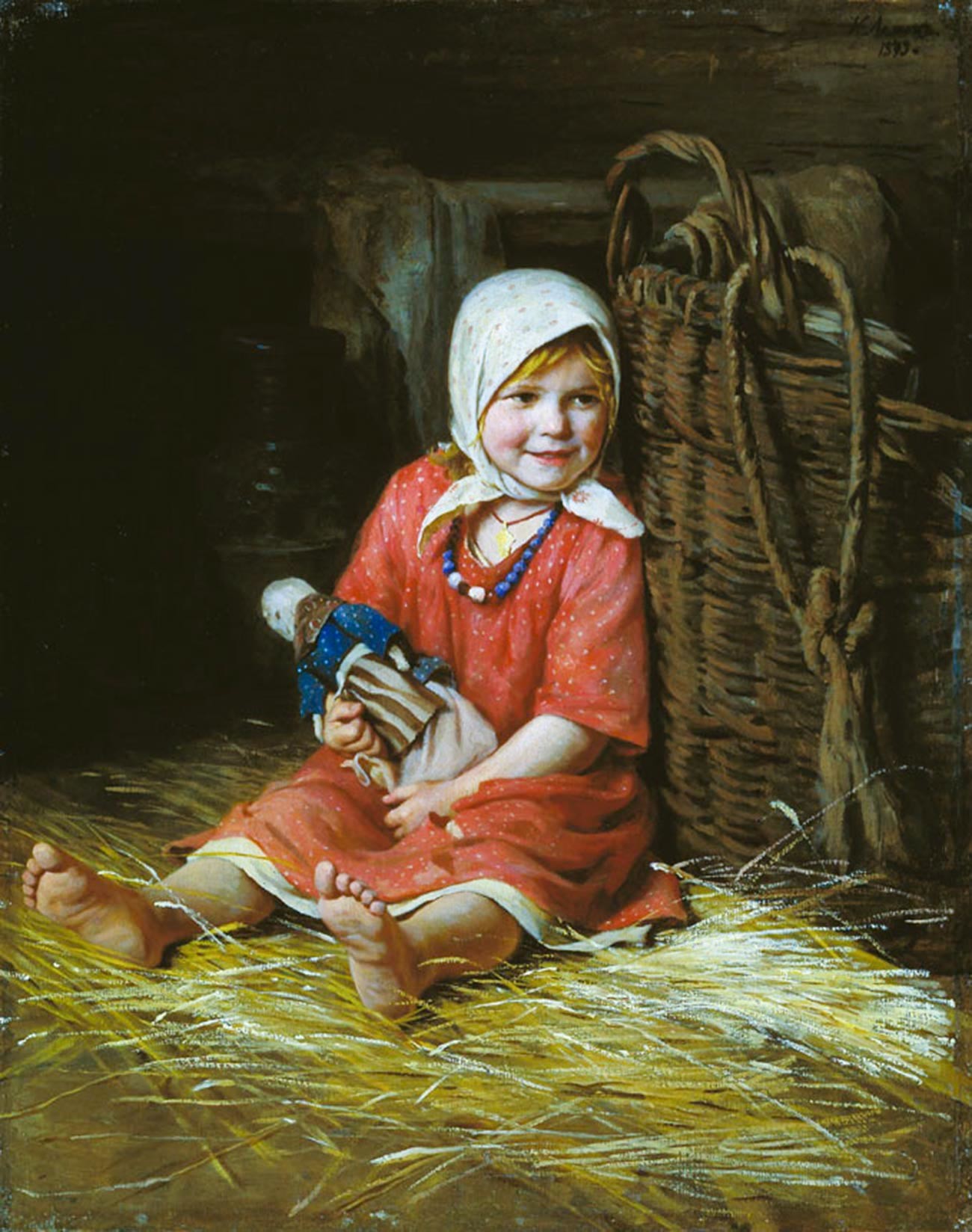 "Var'ka" by Karl Lemokh. The girl is holding a wooden doll dressed in rags.

A peasant household did not have many toys, so each one was cherished. Besides, peasant children had precious little time for playing with their toys: from the age of five or six, they were expected to start helping around the house, primarily, looking after their little brothers and sisters. It was at approximately the same age that children themselves learned to make the simplest toys for their younger siblings. 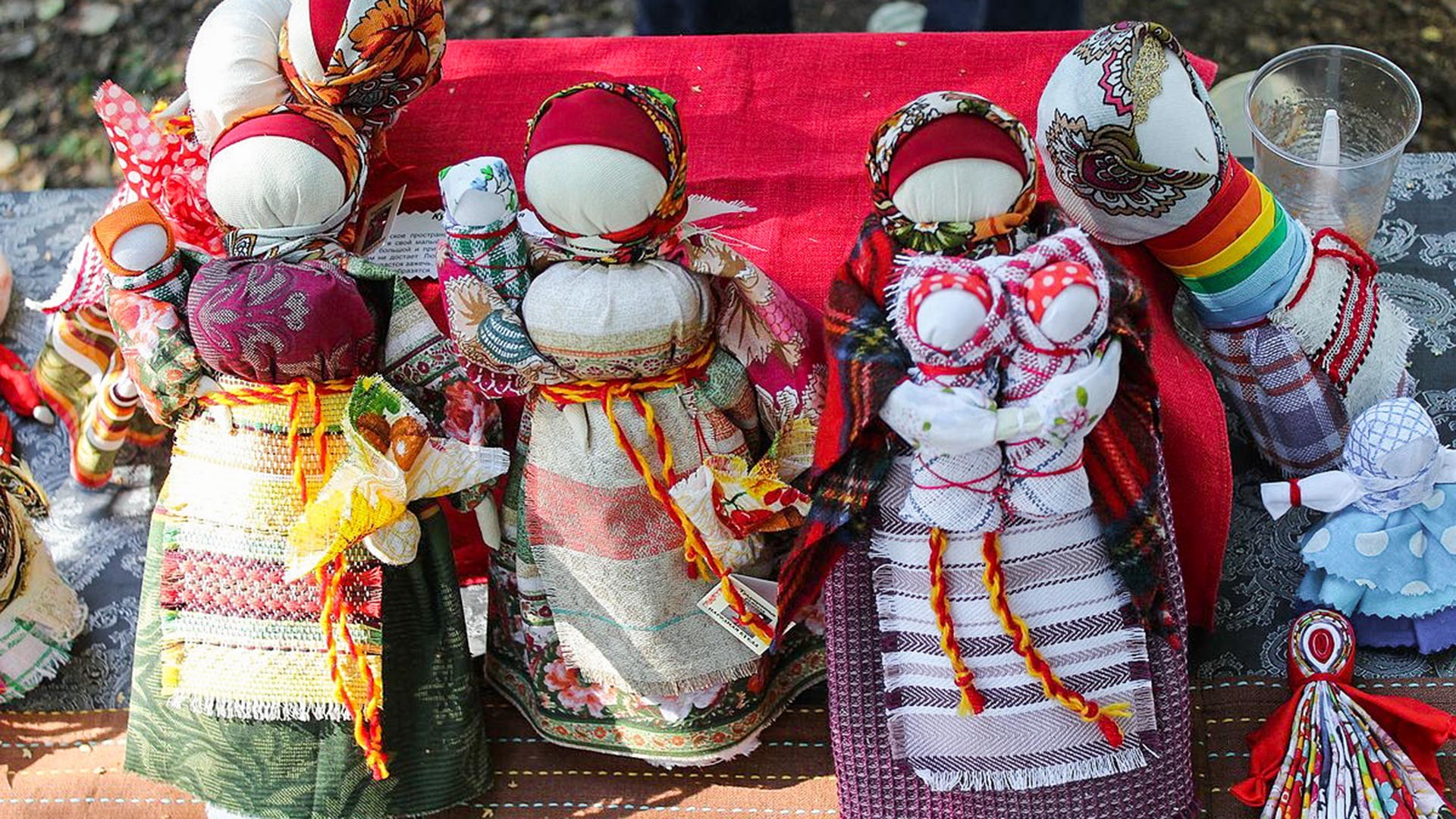 Russian dolls never had faces or eyes painted on them. According to scholar Galina Dain, “the facelessness of the traditional rag doll is a clear vestige of the animistic views of the Slavs. A faceless doll was considered an inanimate object, inaccessible for evil spirits." Russian dolls began to have faces only closer to the end of the 19th century, under the influence of toys from Western cities. What Russians distinguished themselves in was their ingenuity in creating different types of dolls.

According to ancient customs, as soon as a woman realized she was pregnant, she began making a rag doll (zakrutka). She made it without a needle, purely by hand, since metal was considered a "dangerous" element. A zakrutka could be made just of rags or it could be stuffed with grain, hay or wool. Before the baby's birth, the rag doll was placed in the cradle, and when the baby was born, it became its first toy and protective amulet.

A doll like this could be swaddled, dressed up, cradled. Of course, over time, it frayed and got dirty - but it was easy to disassemble it, wash the rags and put it back together, which the children gradually learned to do themselves. One variety of the traditional rag doll was known as nyazhashka (from the word nezhit, meaning to coddle), which was made of clean rags so that a child could kiss it safely. 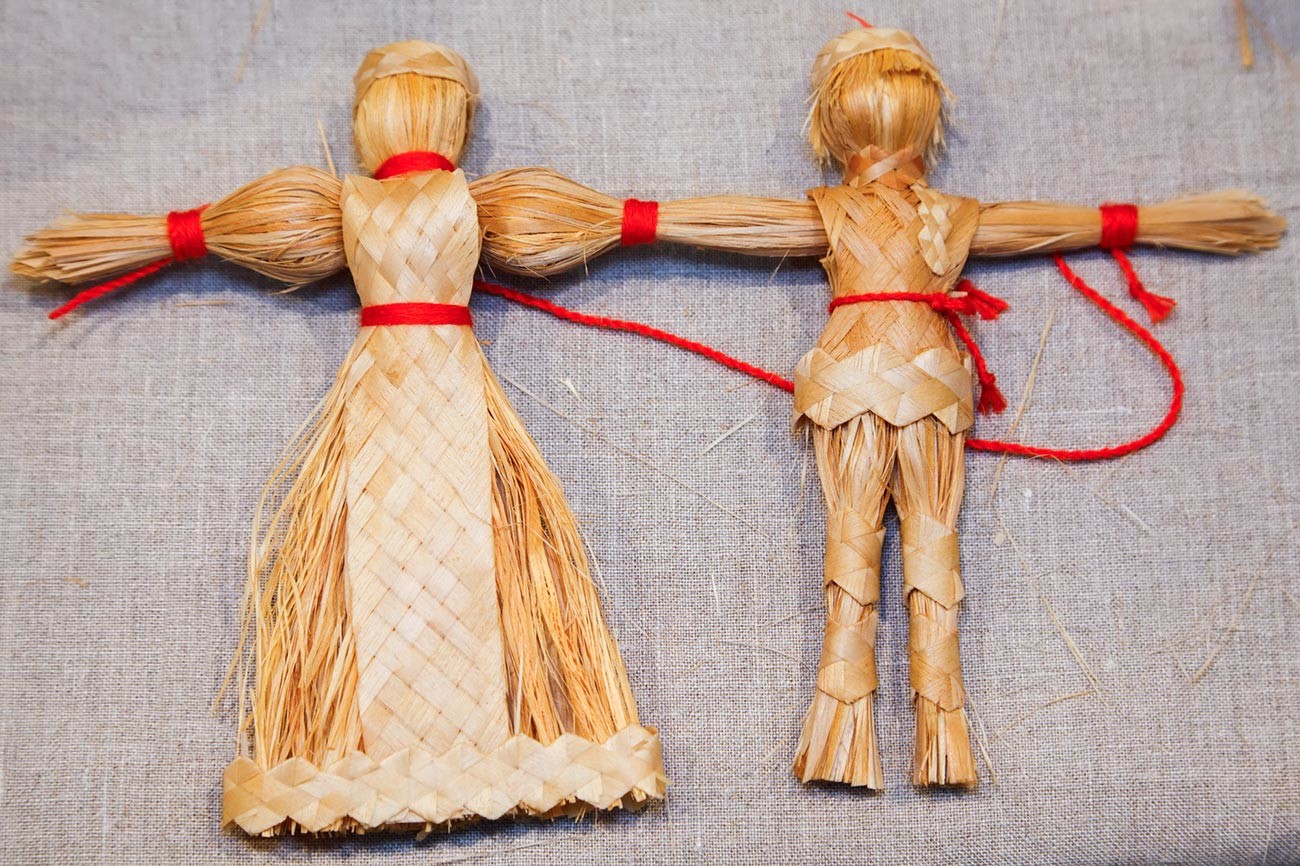 Wicker dolls (strigushki) were made from straw, often right in the fields, to calm and entertain a baby since small children had to be carried around when the rest of the family worked the land and there was no-one to look after them at home. When brought home, a wicker doll could be even more fun – dressed in rags and trimmed at the bottom, this bundle of straw could stand on the table or on the floor and "dance" from vibration created by stamping feet or knocking on the door. 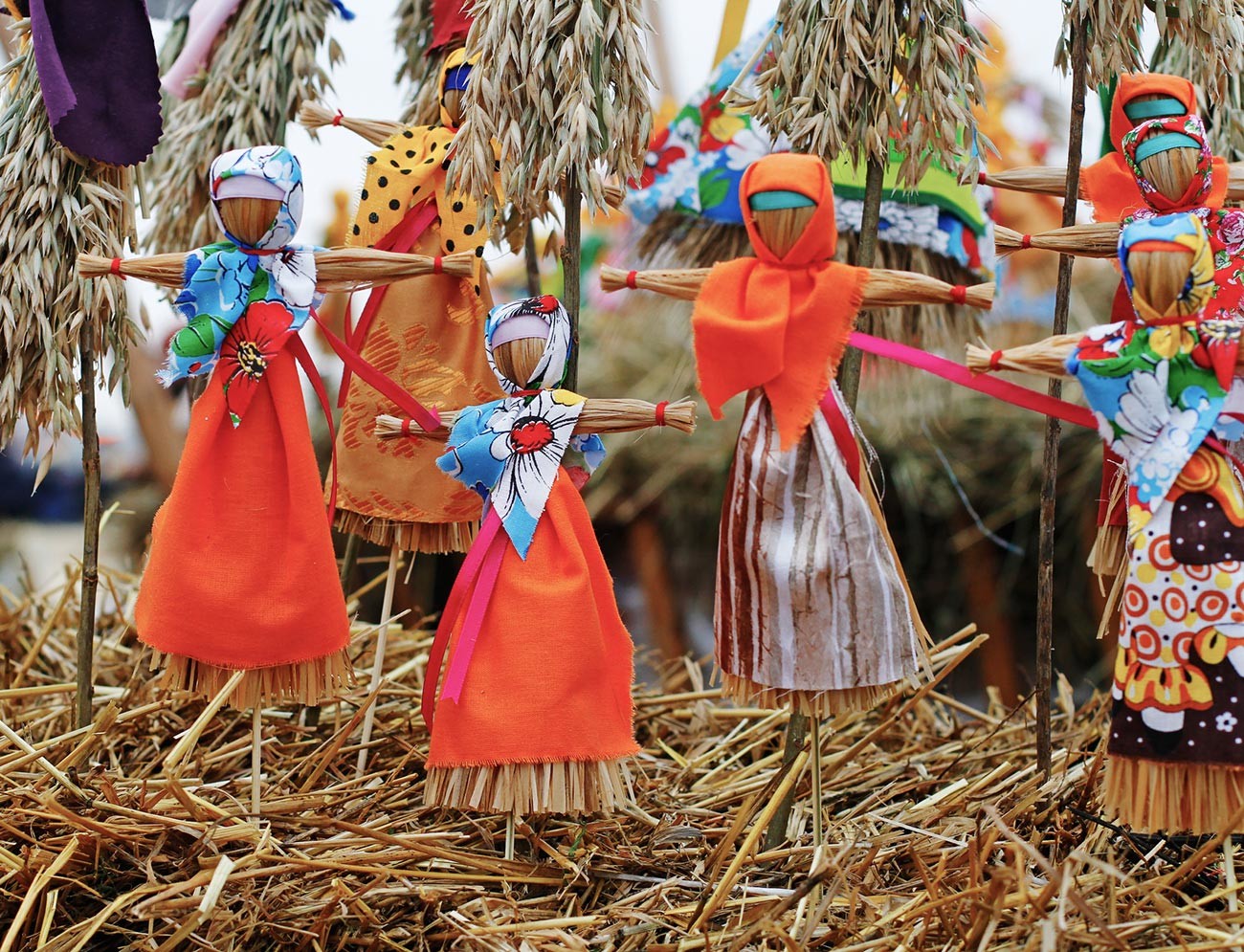 Depending on how the straw was trimmed at the bottom, the doll could - without falling - move in small "steps" on the table, and its dance each time was different! With several wicker dolls gathered together, a whole Russian dance could be assembled.

Bigger wicker dolls were placed between window frames for the winter for straw absorbed moisture, which prevented the frames from swelling when the frost from the glass began to thaw. Children were allowed to play with those large wicker dolls only after they had performed their moisture absorbent function during the winter. 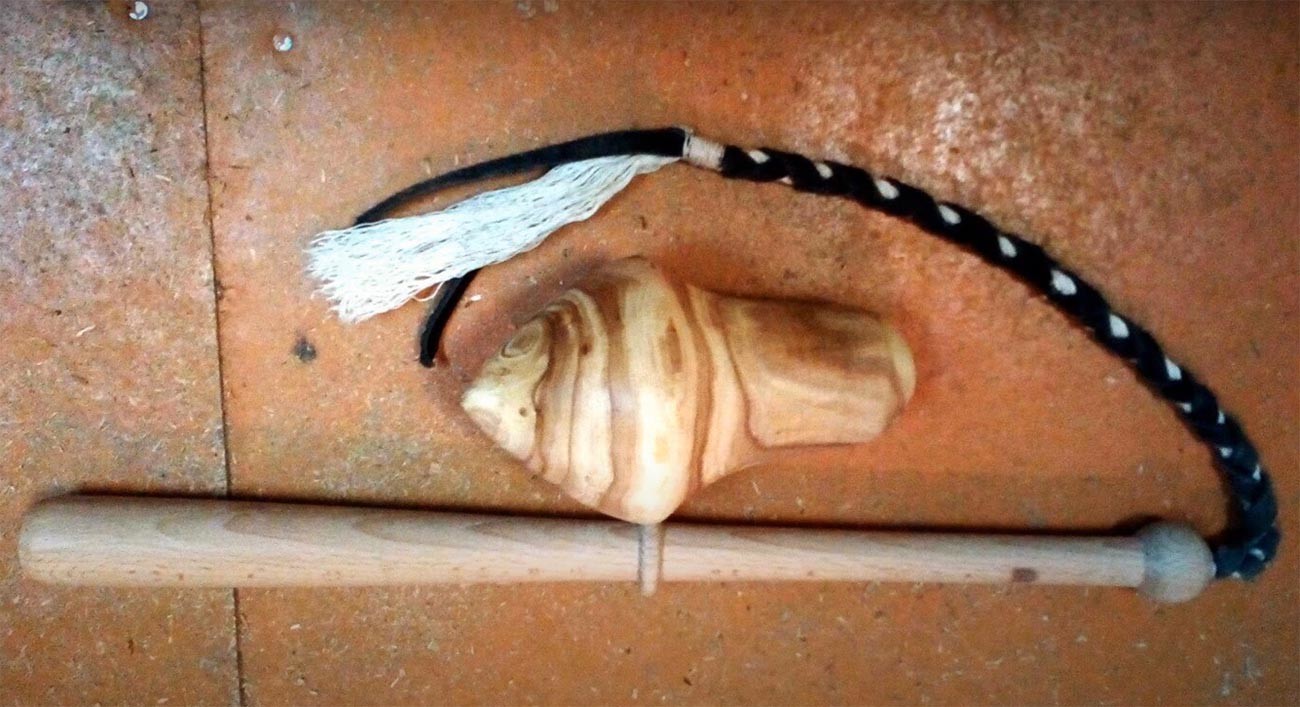 A whipping top (kubar') is a variety of a top which in the Russian tradition had a leather whip attached to it, making playing with it more fun. A whipping top was carved out of a cylinder 4cm to 8cm in diameter and 5cm to 11cm tall. This toy was so popular in Russia that it has been found in various archaeological layers dating back to the 10th century. Oleg the Prophet, Prince Igor, and Vladimir the Great probably played with whipping tops when they were kids. We can confidently say that playing with whipping tops was one of the favorite pastimes among residents of Old Rus.

A whipping top is spun by hand and then kept spinning by lashes of a whip that make the top jump and spin even more. There are numerous games involving this toy. One that was usually played in winter was particularly good fun: a playing field was marked on the ice of a frozen river and two players, taking turns to whip the top, tried to drive it to the opponent's side of the playing field. 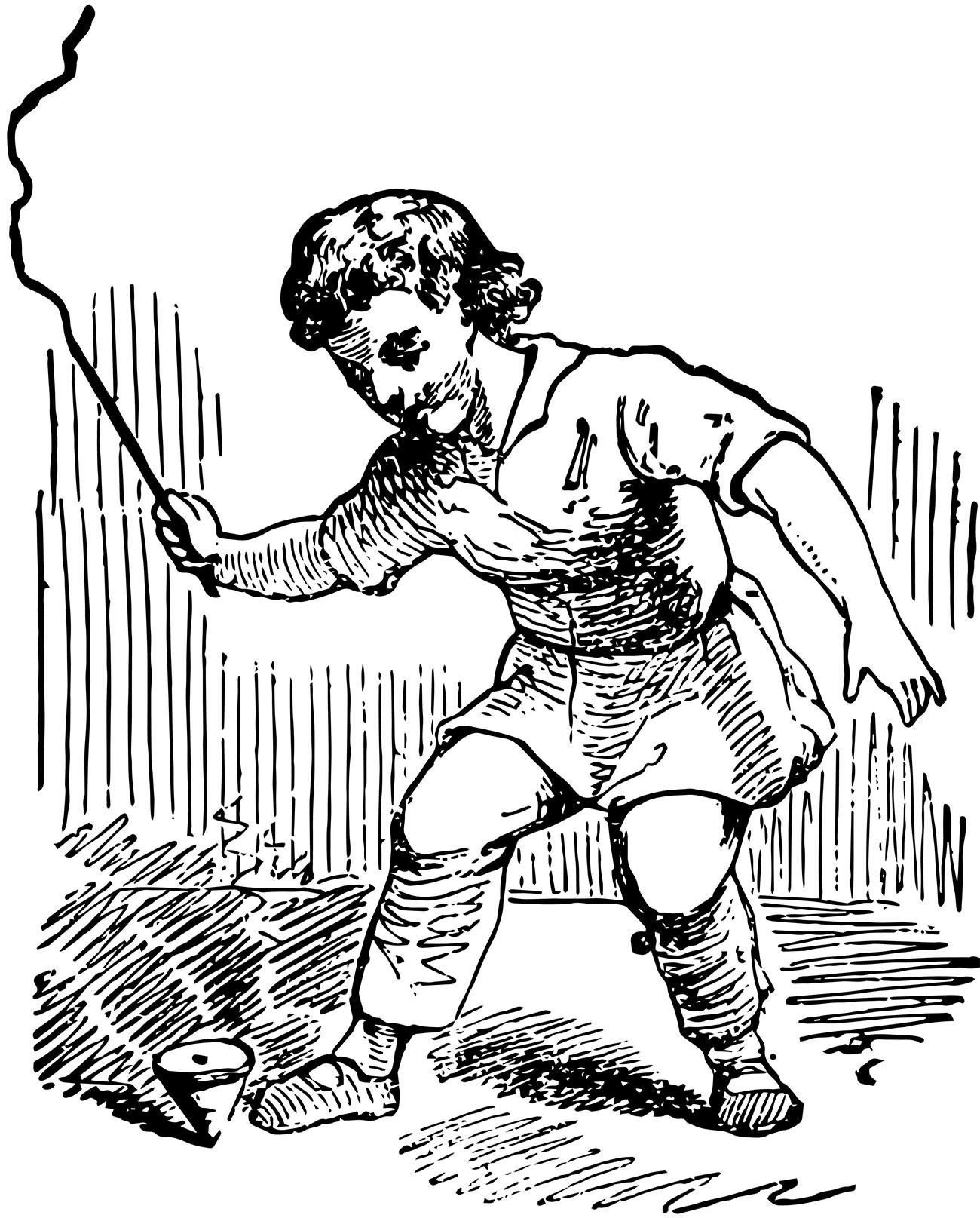 A boy playing a whipping top.

Masters of the game could make their whipping tops follow an "obstacle course" or do somersaults in the air. Playing whipping top developed dexterity, mobility, the spirit of struggle and competition in group games. Could centuries of playing this game on ice be the secret to Russians’ current success in playing ice hockey? 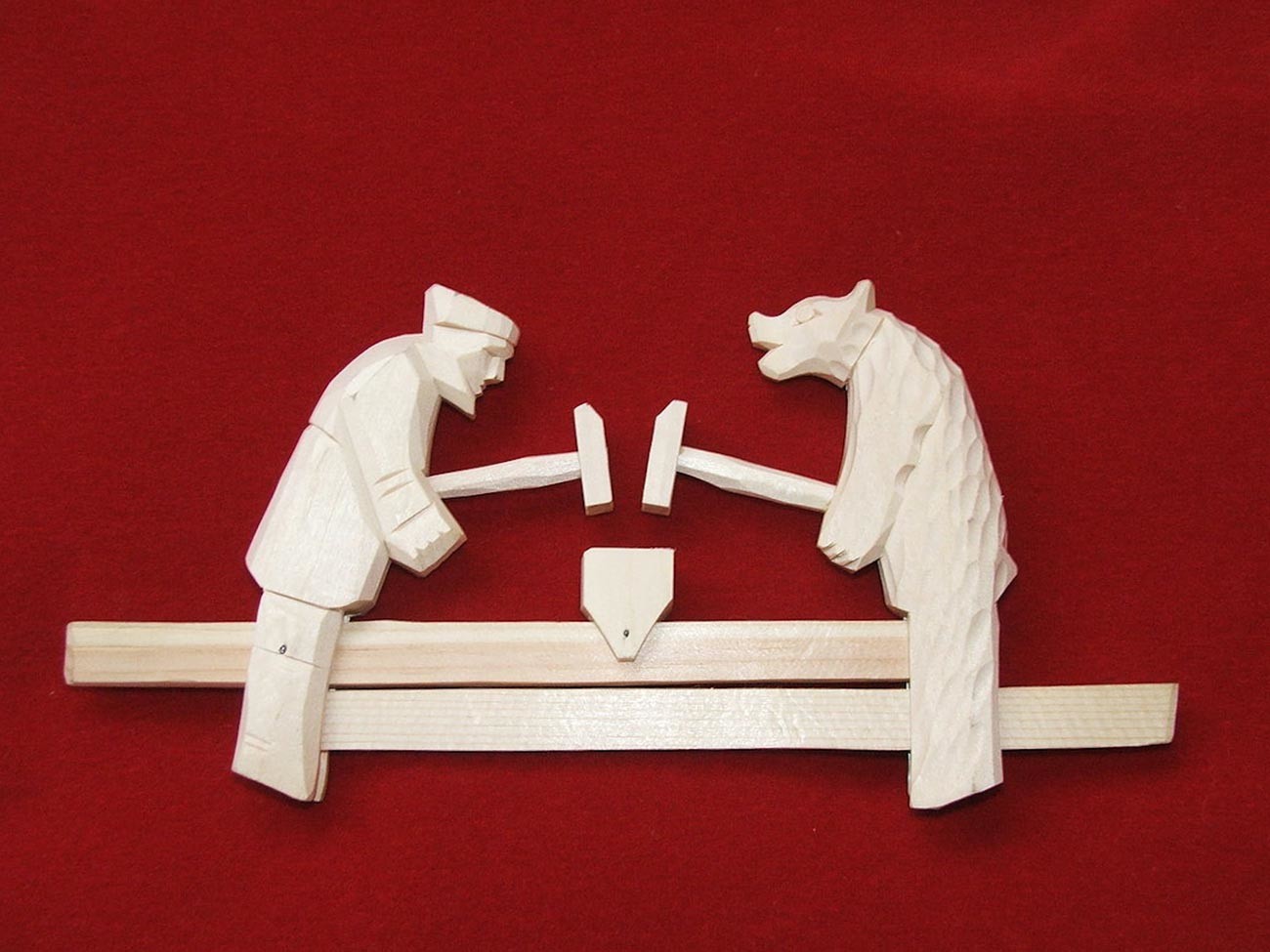 Russian kinetic toys, or motion toys, as they used to be known in the old days, required special skills in woodcarving and the use of proportions, so they were made by professional associations of toymakers. There were many such associations, each with its own style and traditions, but perhaps the most famous place where wooden toys, including kinetic ones, were made was a village called Bogorodskoye, near Sergiev Posad in Moscow Oblast’. The craft began to develop there from the early 19th century, but had in fact existed there since much earlier. Legend has it that Saint Sergius of Radonezh himself loved to make wooden toys and give them to children. 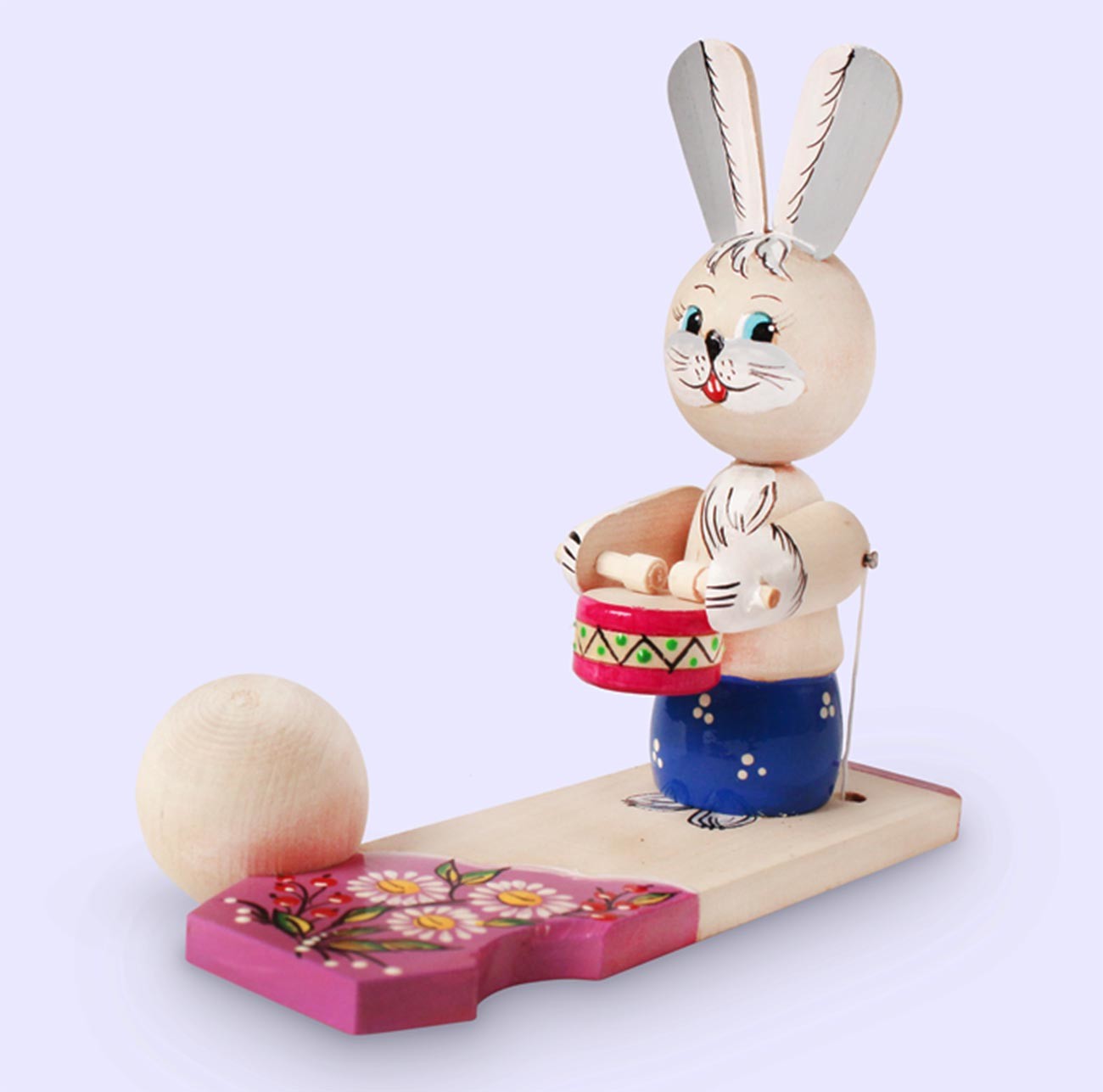 Woodcarvers from Bogorodskoye were so skillful that they could imitate a porcelain figurine in wood. Toys were made from softwoods - linden and aspen, the same that were used to church furniture, icons and decor. Local craftsmen had centuries-old experience in that skill.

Unlike toys made by the majority of other associations of craftsmen, Bogorodskoye toys were not painted since their main feature was motion. Let's take a look at the most famous of those toys. First of all, it is the toy called "A Man and a Bear", with the man and the bear each striking the anvil in turn as you slide the planks they are attached to. 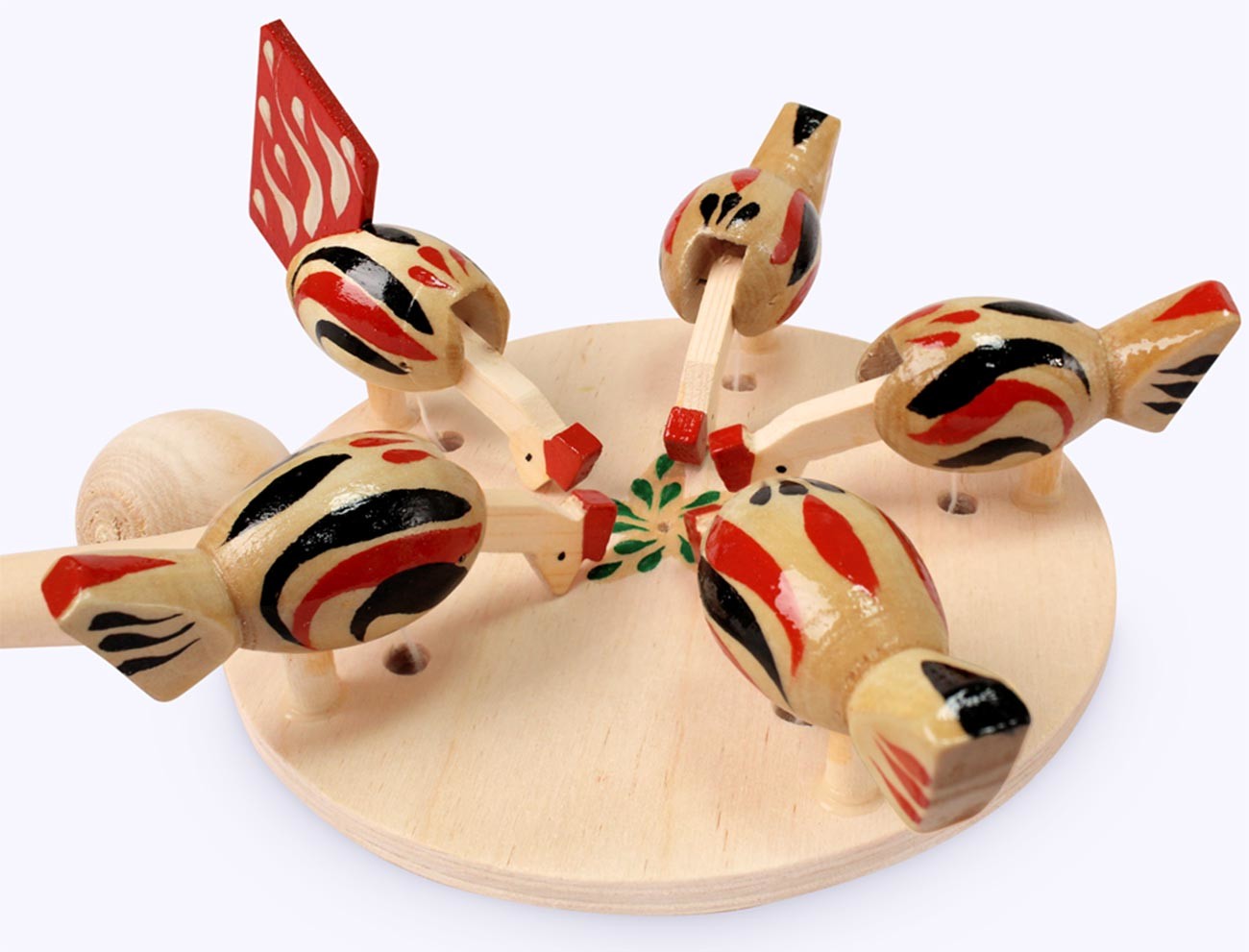 There were also various toys with a wooden weight on a string, by rotating which you could make their elements move, for example, chicken to peck grain, haymakers to make hay, and so on. The simplest toy using this mechanism was a hare (or a soldier) with a drum. 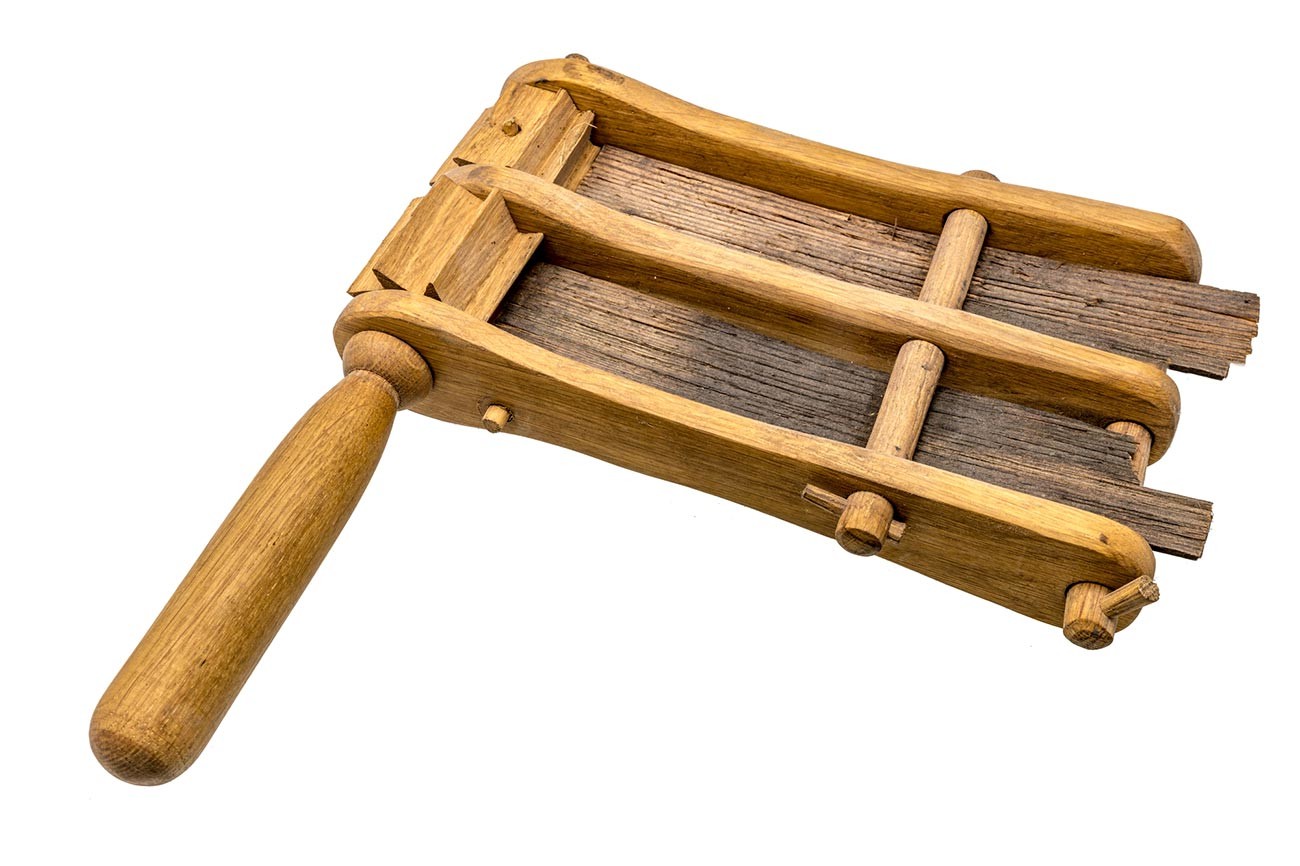 The most famous sound toy is a clay whistle in the shape of a nightingale, inside which water is poured and by blowing on its tail, you can produce "nightingale" trills. Art critic Yelena Kovycheva writes: "Our ancestors believed that all kinds of whistles, imitating bird songs, scared evil spirits away." The Vyatka province even had a spring festival called Svistunya (whistle fest) or Svistoplyaska (whistle dance), during which children blew their clay nightingales for several days in a row, welcoming in the spring and driving away demons. 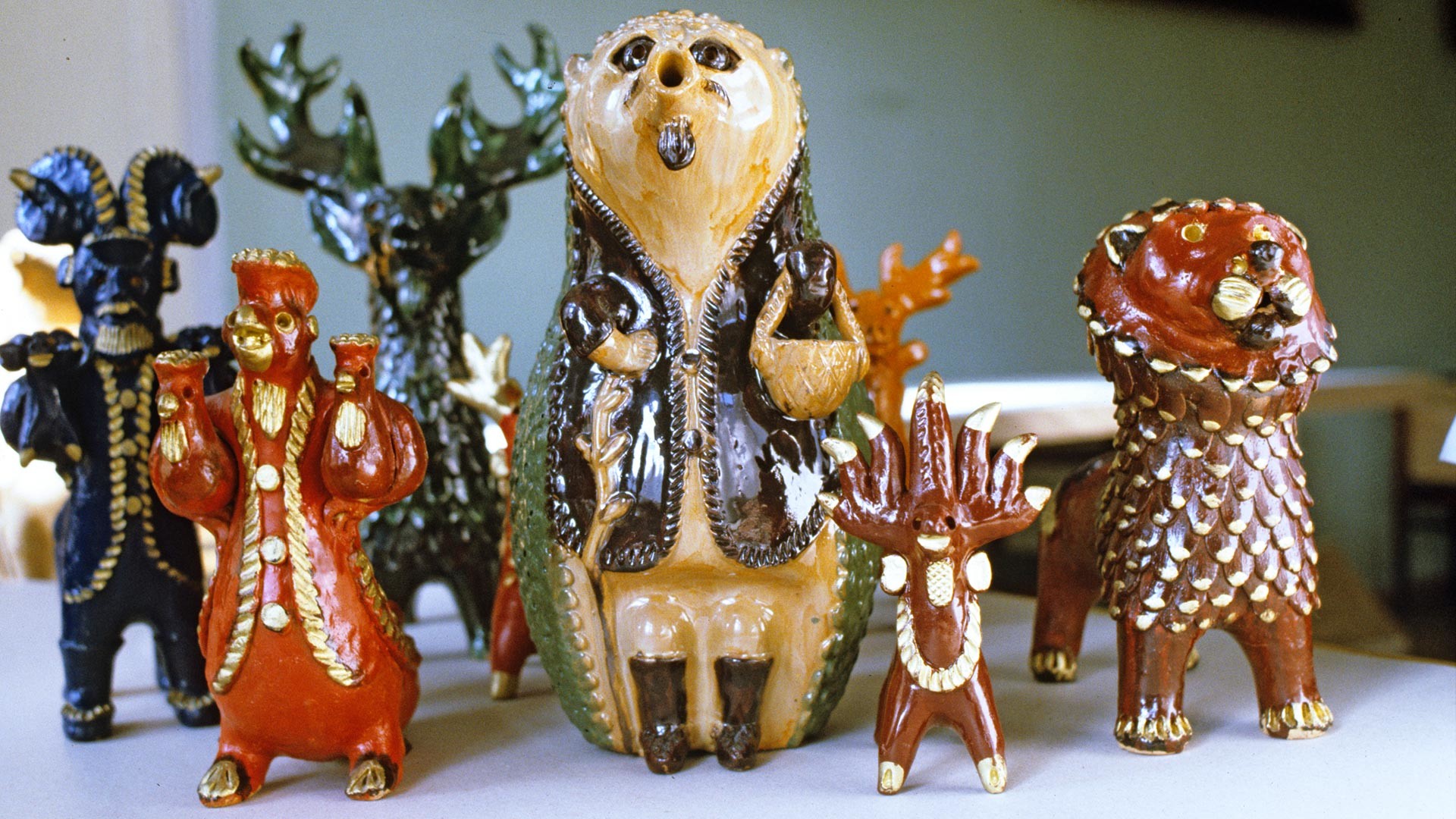 By the way, present-day Kirov citizens (Vyatka became Kirov in 1934) confirm that Svistoplyaska still happens in their hometown every spring! Even though now, the toy whistle birds are mostly mass-produced, instead of the handmade nightingales of the old times – still, the tradition lives on!

The same function of scaring the demons was ‘performed’ by numerous varieties of clappers, noisemakers and rattles. There were also various ocarina-like clay whistles in the shape of animals and people. Some of the famous types of clay toys that are still made include Dymkovo toys (Vyatka province), Khludnevo toys (Kaluga province), Abashevo toys (Penza province). Interestingly, Abashevo toys have clearly preserved through the centuries ancient images of fabulous animals, making them look something like objects of primitive art.