How did people do their laundry in the USSR? 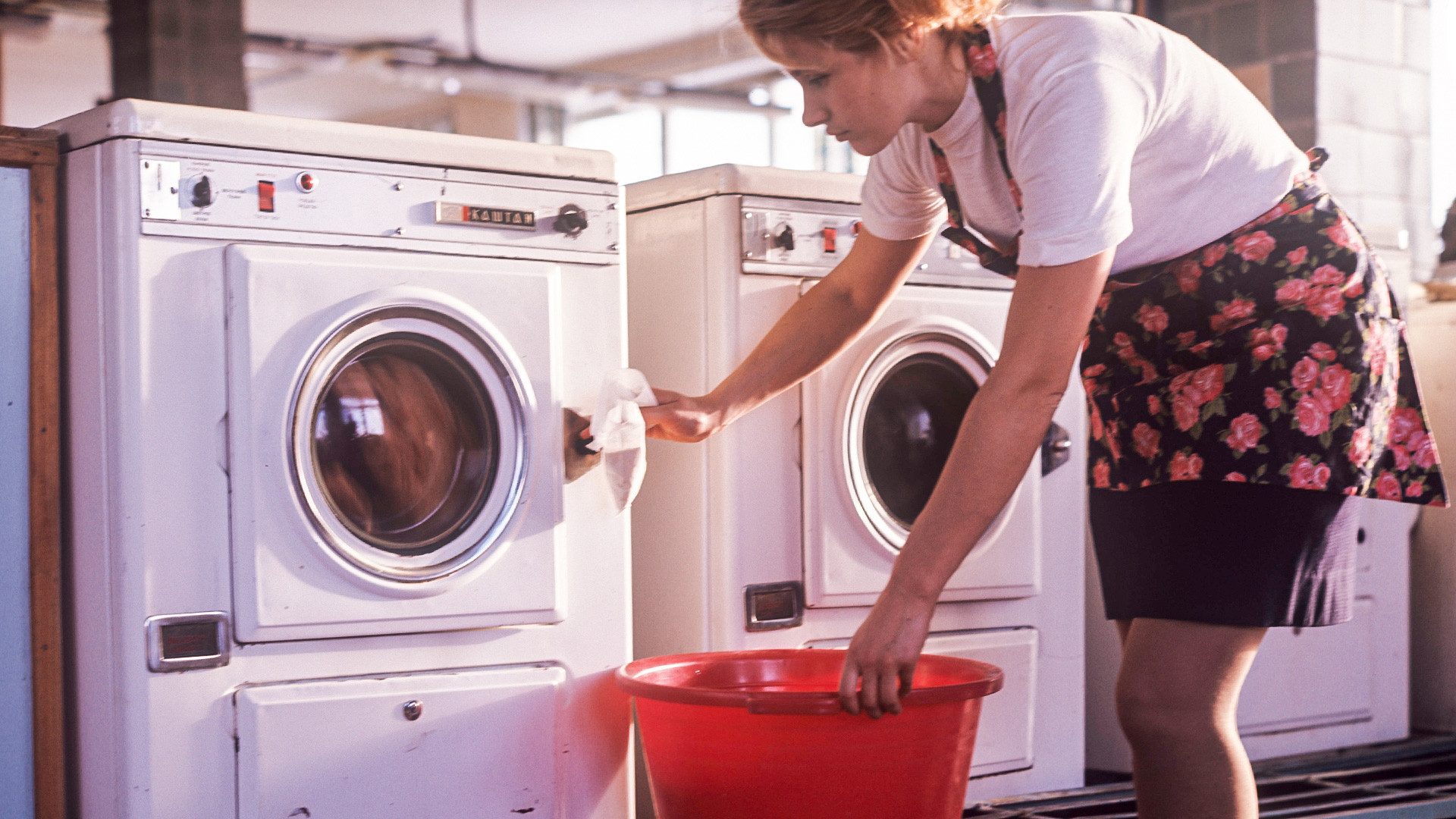 At the Chaika laundry in Moscow.

Viktor Chernov/Sputnik
In big cities, people could do their laundry in self-service laundromats, while on rivers and ponds in small villages you can still come across wooden platforms where people would wash their clothes.

If you have ever been to a Russian village, you probably noticed wooden planks on rivers and lakes stretching out from the shore. These platforms were not built for fishing or the waterside views, but rather for washing clothes. 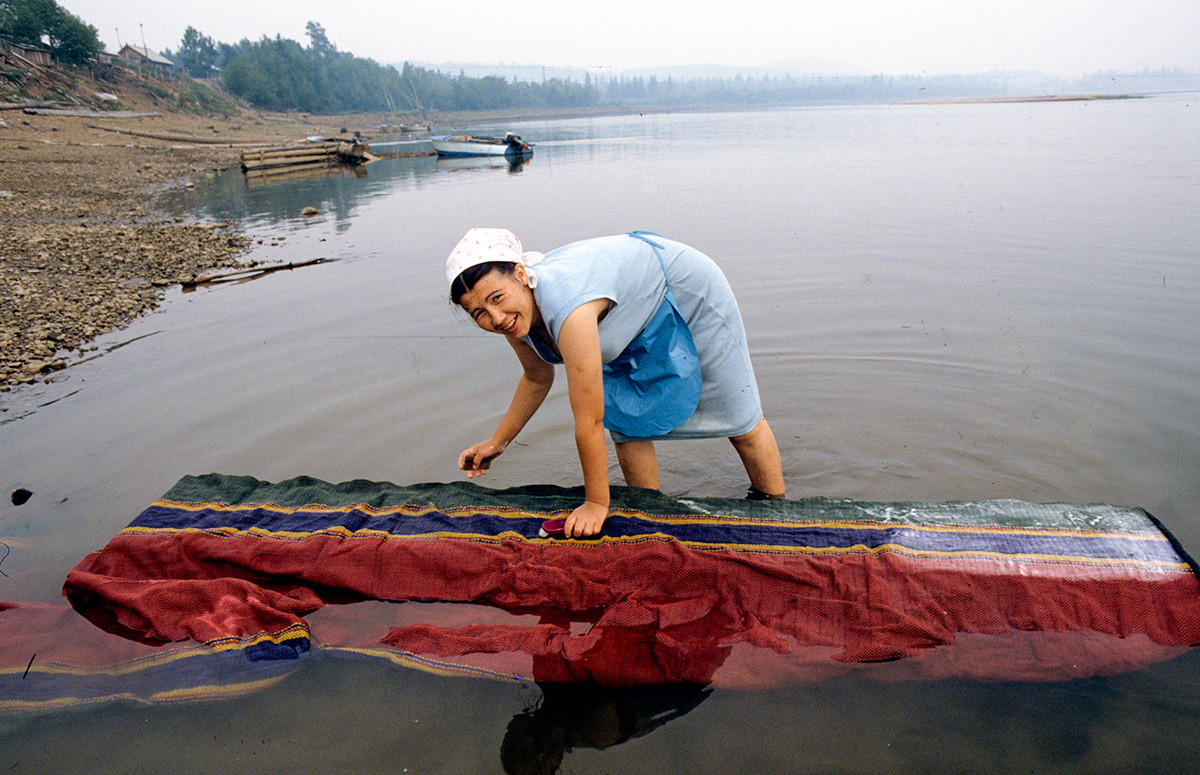 Just a century ago, this was how laundry was done even in cities like Moscow and St. Petersburg. It was considered very hard work, especially in the years before World War II when not all houses had running water. These days, these wooden platforms are mostly used for washing carpets, and only in the summer when the water is warm.

To do the laundry at home, people used a basin and a washboard. Clothes were rubbed on the board and then rinsed in soapy water in the basin. Instead of a powder, people most often used laundry soap. It sounds pretty simple, but in fact this was hard work, and you could easily scrape up your hands on the surface of the washboard. On the plus side, doing the laundry this way didn’t require any electricity. 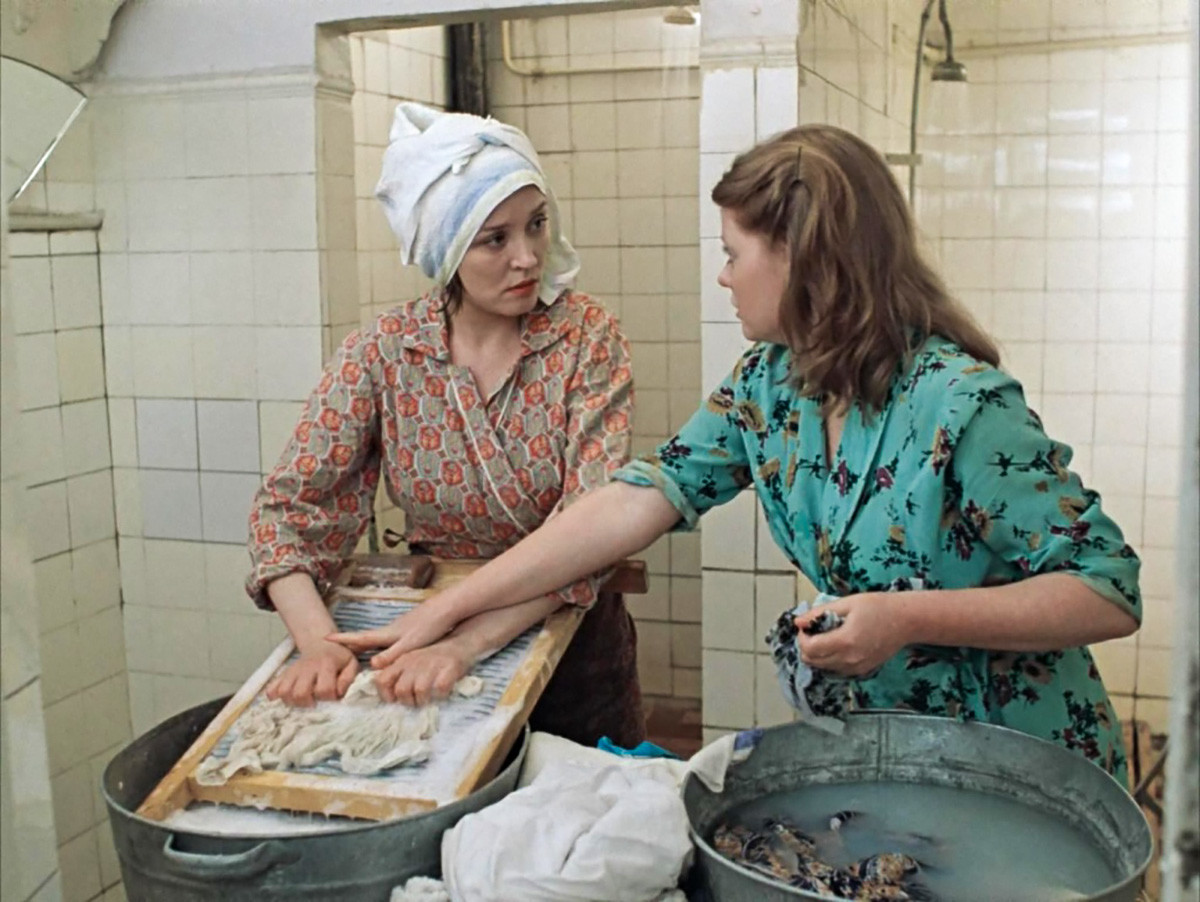 A scene from the movie "Moscow doesn't believe in tears."

White items like bed linen, shirts and towels were soaked before washing. For this, grated laundry soap was dissolved in hot water and then laundry was left to sit in it for several hours. Particularly dirty items could be boiled in a soapy solution with the addition of soda. Laundry soap contained a large amount of alkali, which allowed it to break up grease. 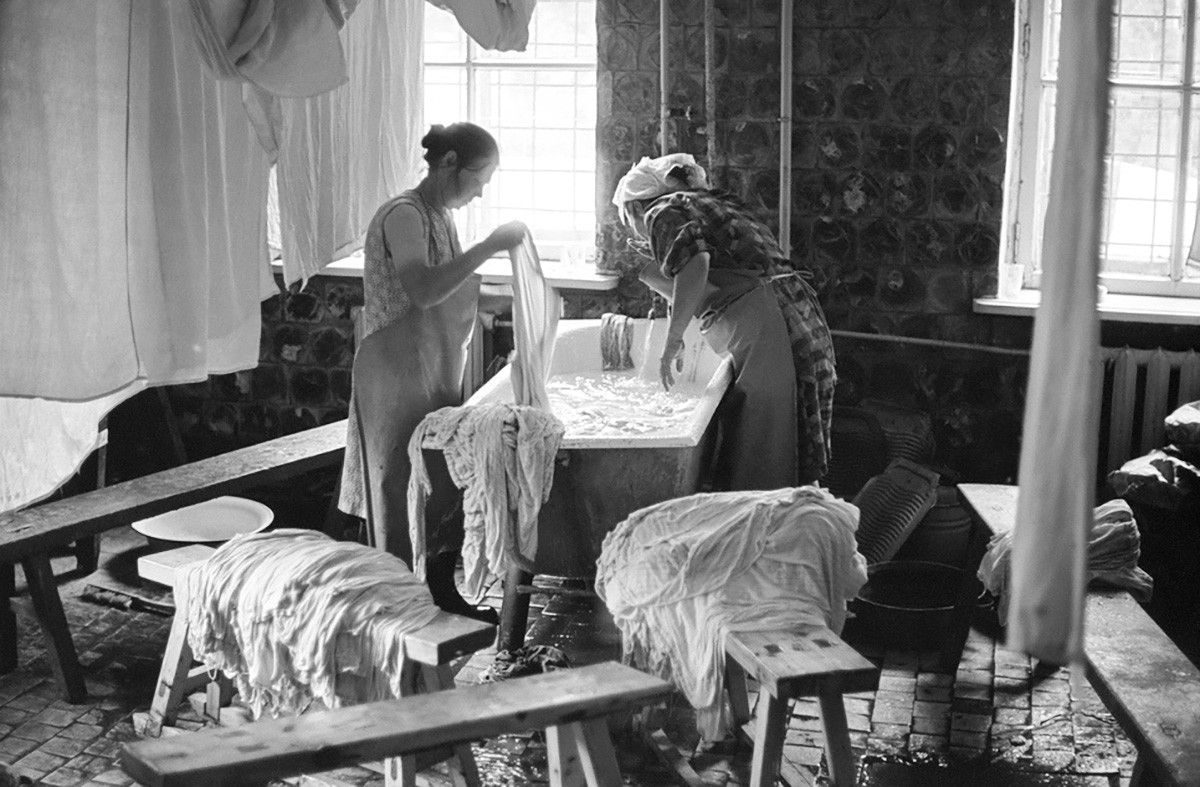 At the landry of sanatorium, Siberia,1981.

The first Soviet washing machines appeared in the mid-1950s. Waiting lists for the most basic varieties of the Vyatka, Riga, Ural or Oka models could take several months, but it was worth the wait since a washing machine would save you a lot of time and work. All these models had a more or less similar design and were popularly known as "a bucket with a motor." The contraption was placed inside a bathtub, filled with tap water and used to do a family’s laundry for the week. The used soapy water from the machine was then drained through a rubber hose into the tub. These machines were quite good at washing per se, and even filling them up with water and then draining them was not much of a hassle. Their main shortcoming was the absence of a spin cycle—there were wringers, but they did not work well and practically no one used them. For this reason, washed but not yet rinsed laundry had to be rinsed in the bathtub and then wrung out by hand. This was the hardest part of the whole process. 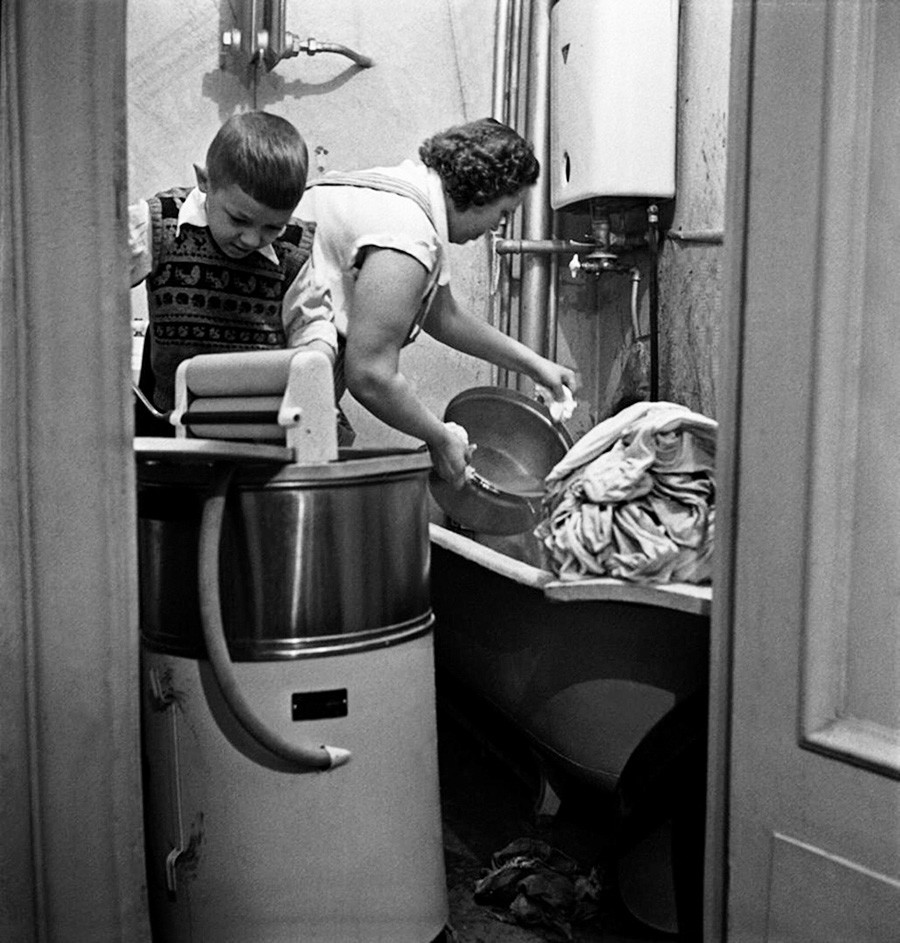 One of the first washing machines, 1958.

Soviet engineers also developed compact washing machines that did not take up much space and were suitable for small apartments. The first model was called Malyutka (“baby” in Russian), and all subsequent varieties of this type of washing machine were unofficially referred to by the same name. In fact, they are still sold in Russia and are particularly popular for dachas. Which makes sense when you consider that they weigh less than 10kg, cost a third or a quarter as much as a standard washing machine and can wash up to 4kg of linen in one go. 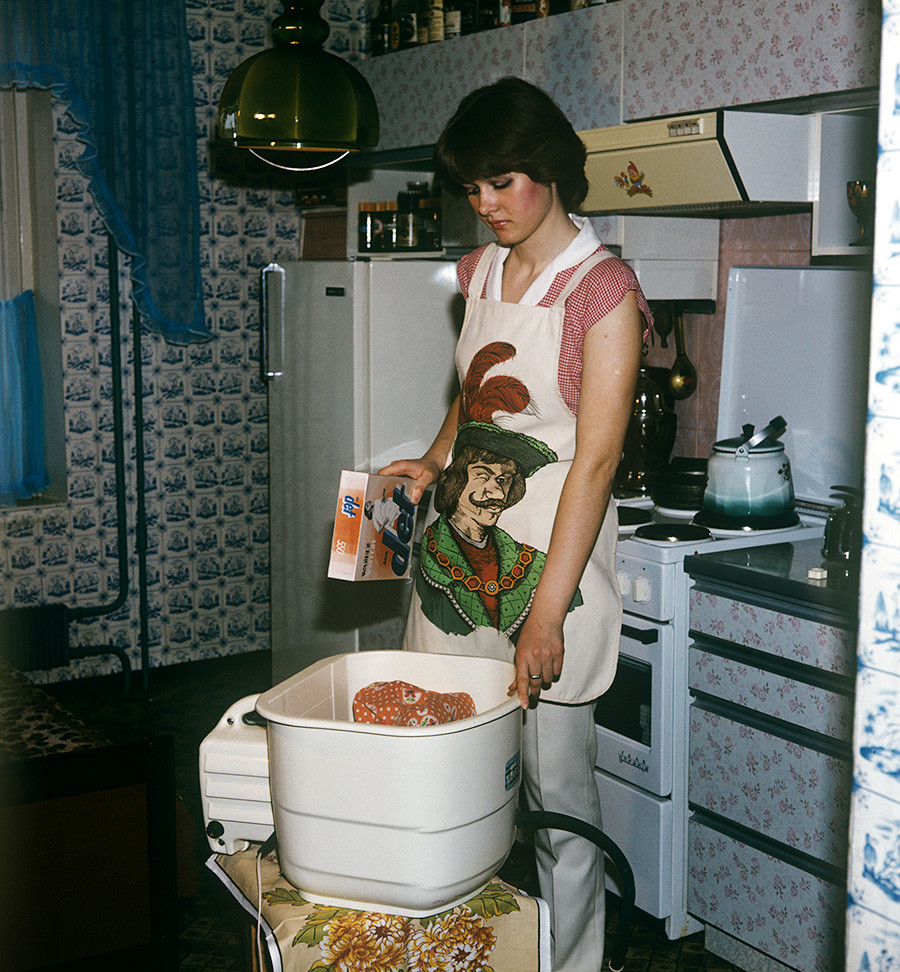 A breakthrough in the Soviet washing machine industry came in the late 1970s with the launch of the Evrika semi-automatic washing machine. They cost a lot, but even so you could only buy one if you had the right connections. It required installation, weighed as much as a "cast-iron bridge" (around 80 kg) and was connected to the tap with a water hose. But, unlike its predecessors, it had both a rinse and a spin cycle, so the result was not just clean but also wrung-out laundry. However, during the spin cycle the machine shook and jumped so much that it had to be fitted with a special stand. “When the spin cycle began, my grandmother would say to my grandfather: 'Volodya, come and hold it!' So the two of them would hold it from the top and let go only after the spinning was over. The racket was terrible,” Vasya Shapovalov from Moscow recalls from his childhood in the 1980s.

Fully-automatic washing machines, such as the Vyatka-Avtomat, appeared later, but they were a rarity since for a typical Soviet family their price was about as affordable as buying a spaceship. 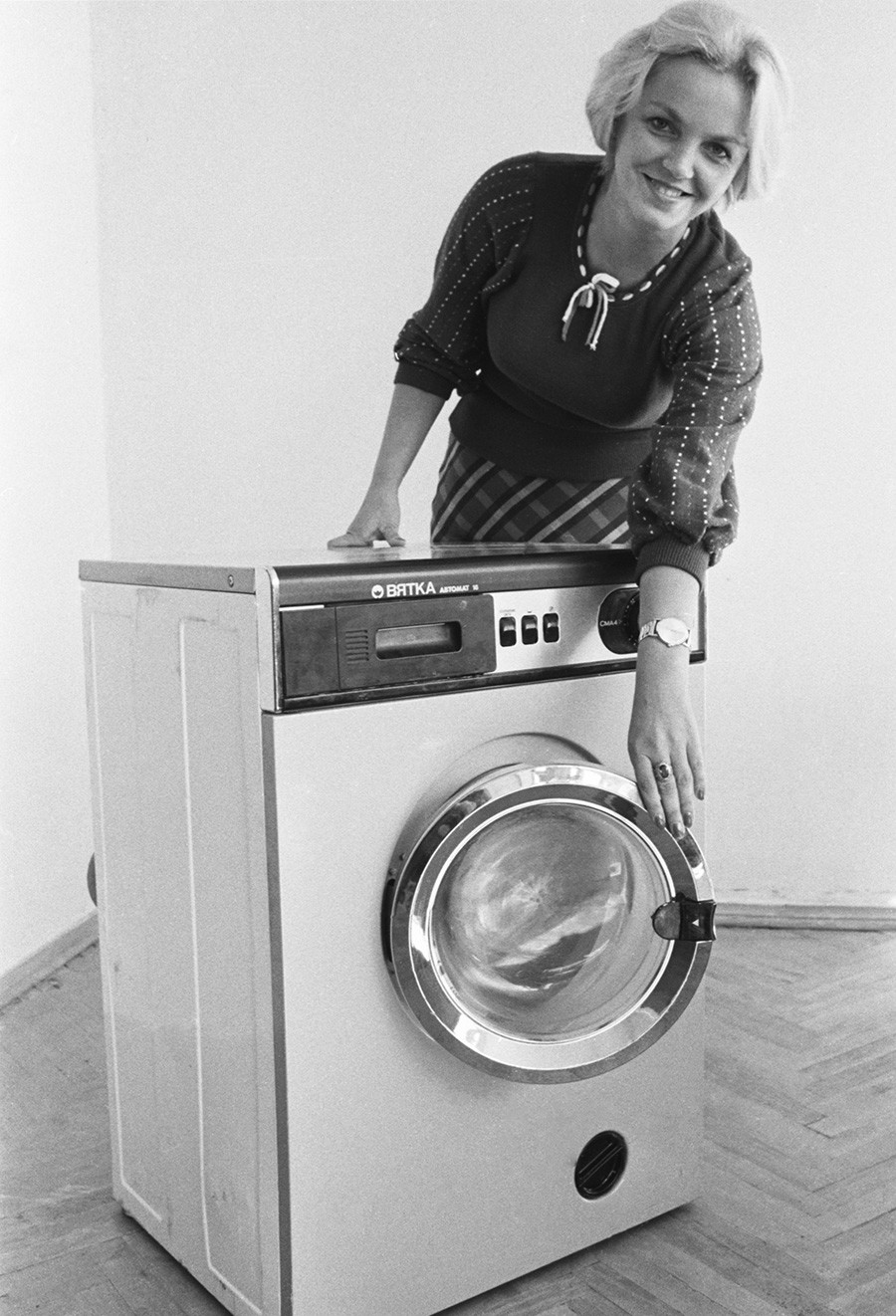 The USSR began producing synthetic detergents at the same time as washing machines. The first washing powder, called Novost, went on sale in the Soviet Union in 1953. It was based on hydrogenated animal fat. By the mid-1960s, the range of washing powders had expanded, with the brands Era, Lotos, Astra, Luch and others appearing on the market. In addition to washing powder, there were also washing pastes. They smelled awful but could cope with just about any stain. “It could be used to wash clothes or to wash one's hands or to clean the floors. Even now, nothing can clean your hands of soot or grime after repairing a car quite as well as a paste,” many Russians recall. 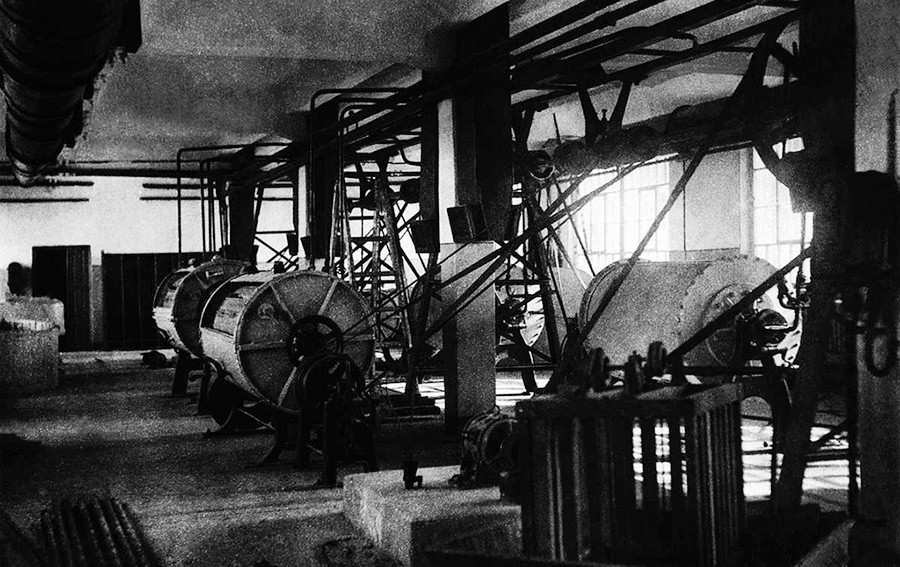 One of the goals of the Soviet regime, especially in its early years, was to liberate women from the slavery of doing household chores. All over the country, there appeared canteens, kitchen factories and huge mechanized laundries to take care of housework. Laundries were set up at factories for the workers, along with municipal laundries where anyone could have their things washed. Laundromats, as with everything else in the Soviet Union, had to meet certain standards of operation. 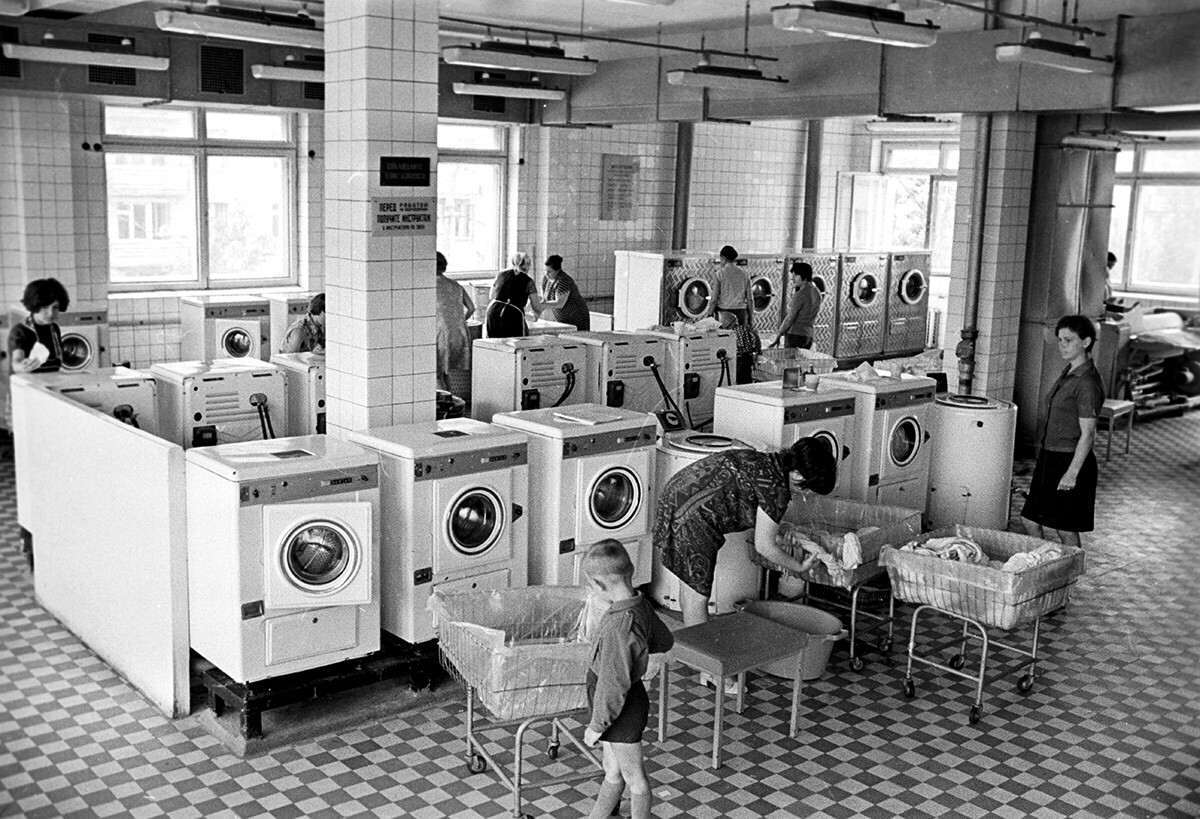 At the Chaika laundry in Moscow

In the 1970s, many large cities already had self-service laundromats. In Moscow, one of the first was the Chaika laundry, where you could wash and tumble-dry your clothes and linen for a small fee. It also offered ironing and dry-cleaning services. 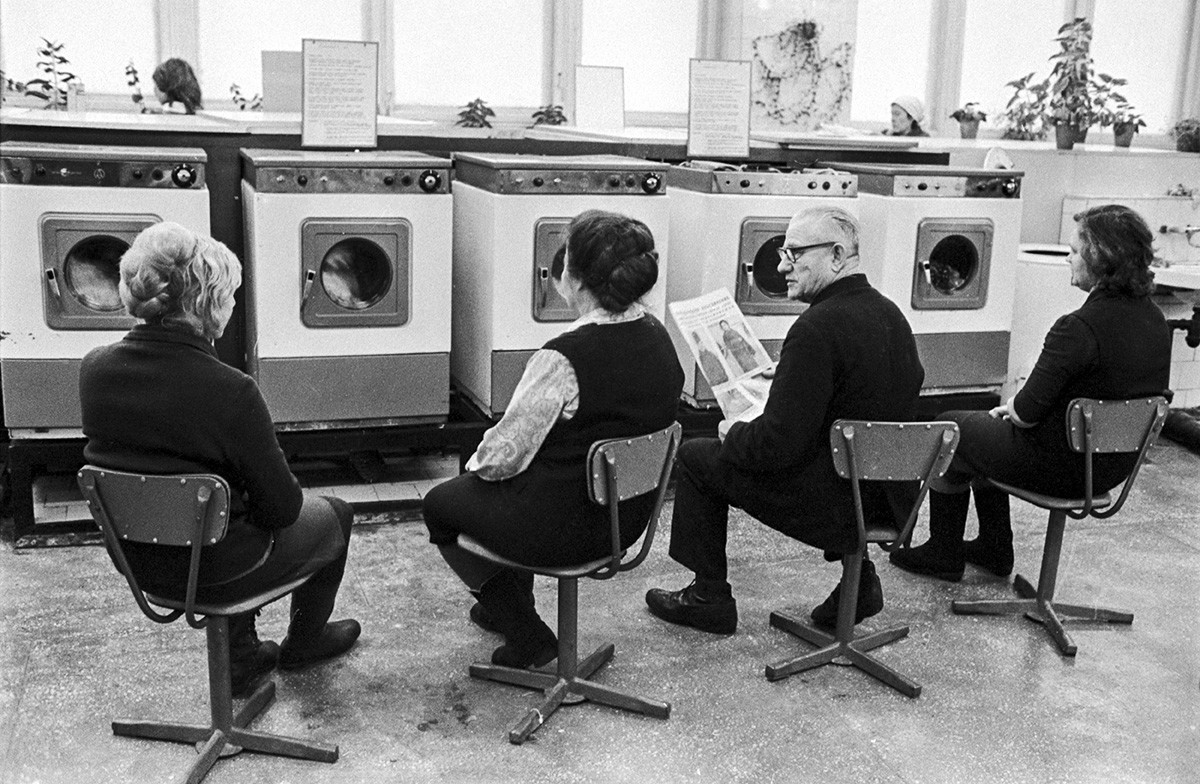 People wait for their wash at the laundry, Novosibirsk, 1973.

These days, it is difficult to imagine an apartment without a washing machine. The huge laundries that flourished in Soviet times are no longer in demand, although every city in Russia still has them as well as dry cleaners. They are mostly used for cleaning items that are difficult to take care of at home, such as carpets, bedspreads and coats.