How New Year was celebrated in besieged Leningrad (PHOTOS) 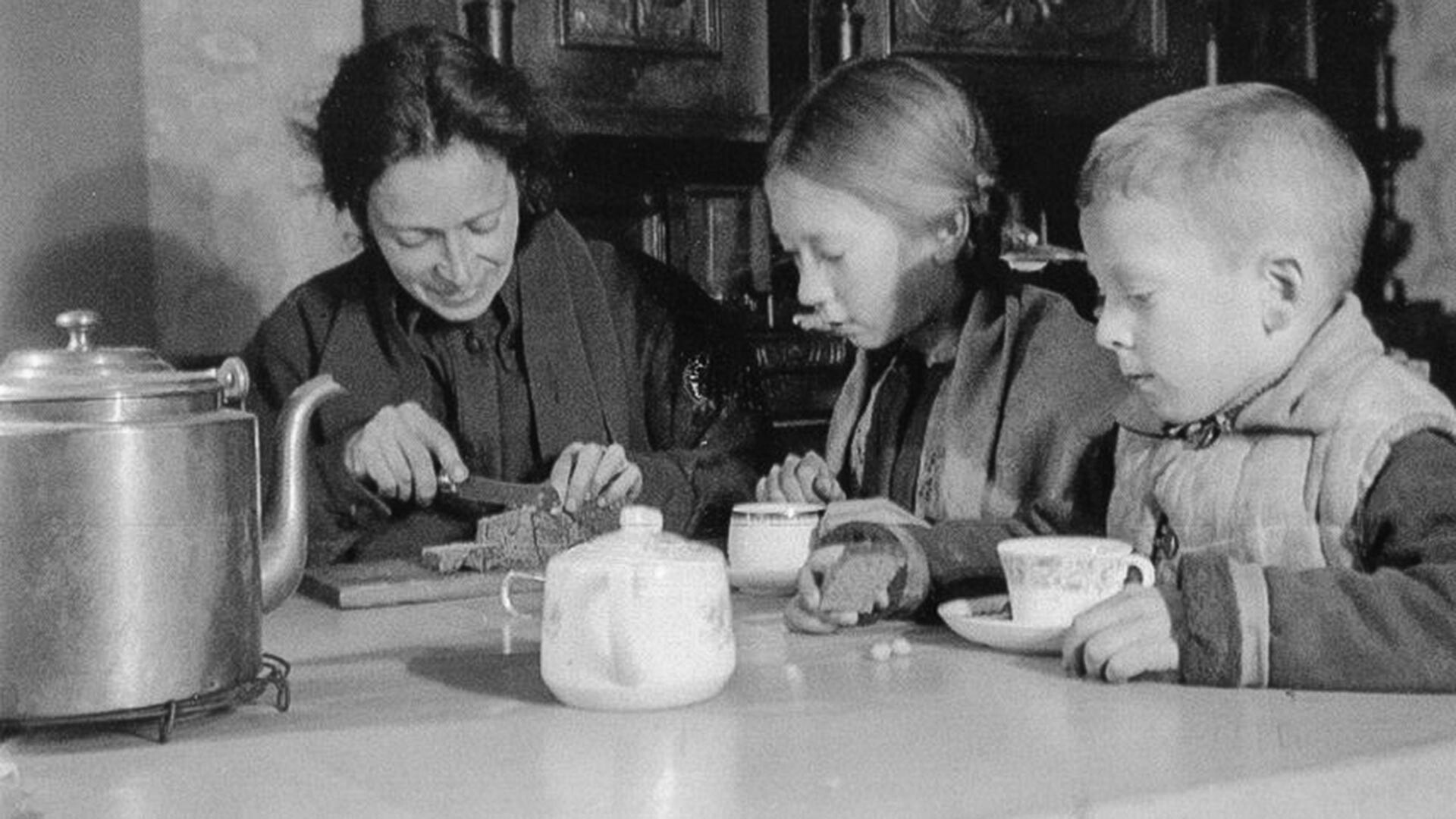 A music teacher Nina Nikitina with her children in besieged Leningrad.

A. Nikitin
For the population of the second most important Soviet city suffering from siege and mass starvation, New Year’s festivities were perhaps the only joy in life.

Cakes made of potato peel, a thin soup, aspic made from wood glue, a slice of bread and a spoonful of jelly – those were the “delicacies” gracing the festive tables in Leningrad on December 31, 1941. But for the exhausted and hungry residents of the besieged city, it was a real feast.

On September 8, 1941, the troops of Army Group North captured the town of Shlisselburg, thus closing the encirclement ring around the Soviet Union’s second most important city. From the north, Leningrad was blocked by the Finnish army. 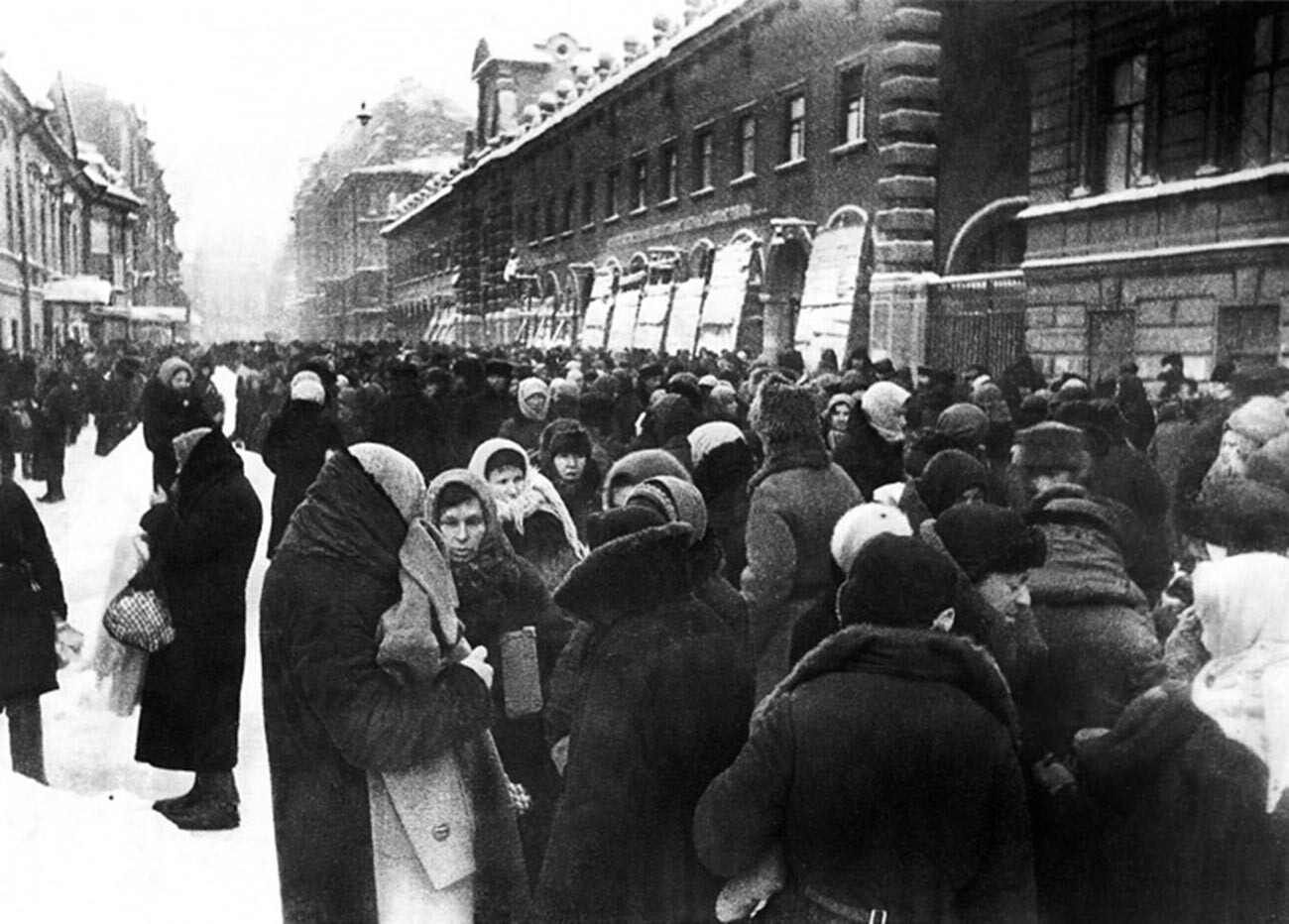 The Forge Market in besieged Leningrad.

More than 2.5 million residents of the city and about 500,000 soldiers of the Leningrad Front were cut off from the rest of the country. The only connection with the “mainland” was through Lake Ladoga along the so-called Road of Life, which was under constant enemy fire. However, neither it nor the Soviet transport aviation could ensure proper food supplies for such a large city.

Bread rations were reduced all the time and soon Leningrad faced mass hunger: people fainted at their workplaces from exhaustion, there were instances of cannibalism and murder for food ration cards. By the beginning of the winter, people had no electricity, no running water and no heating and the hundreds of corpses lying on the streets no longer shocked anyone. 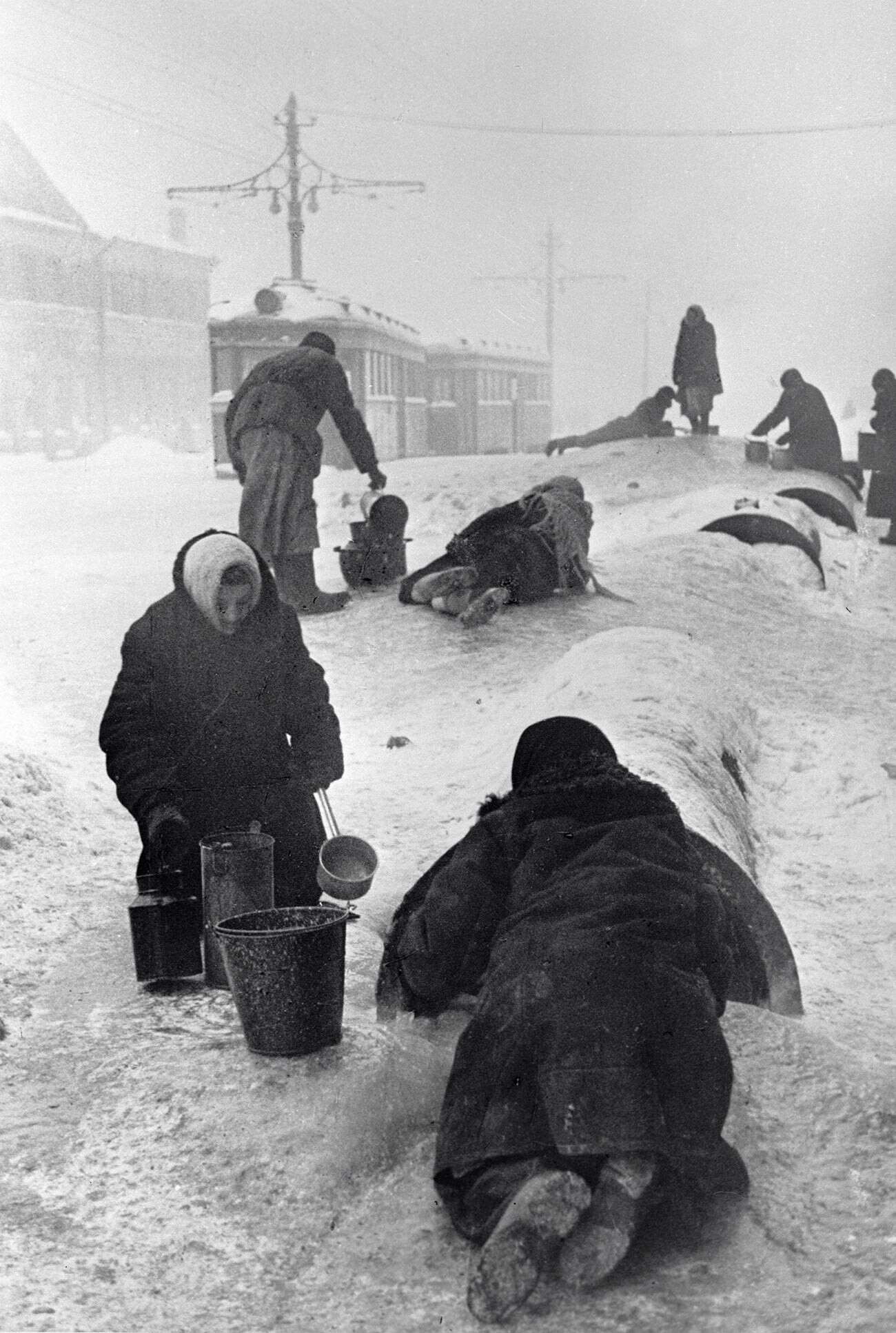 Residents of besieged Leningrad filling their buckets with water from a pump on Nevsky Avenue.

To try to cheer up the city’s surviving population, who were in apathy and deep depression, the municipal authorities decided to hold at least a semblance of New Year celebrations to usher in the year of 1942. It was seen as particularly important for tens of thousands of children who had not been evacuated from Leningrad in time.

Despite the shortage of fuel, a thousand fir trees were brought to the city from nearby forests to be erected in schools, kindergartens, theaters and houses of culture. Plays and performances were put up for residents of the city, although they were often interrupted by air raids. Exhausted children could hardly follow what was happening on the stage, but they were glad for the holiday and especially for the opportunity to get a hot meal after the show. 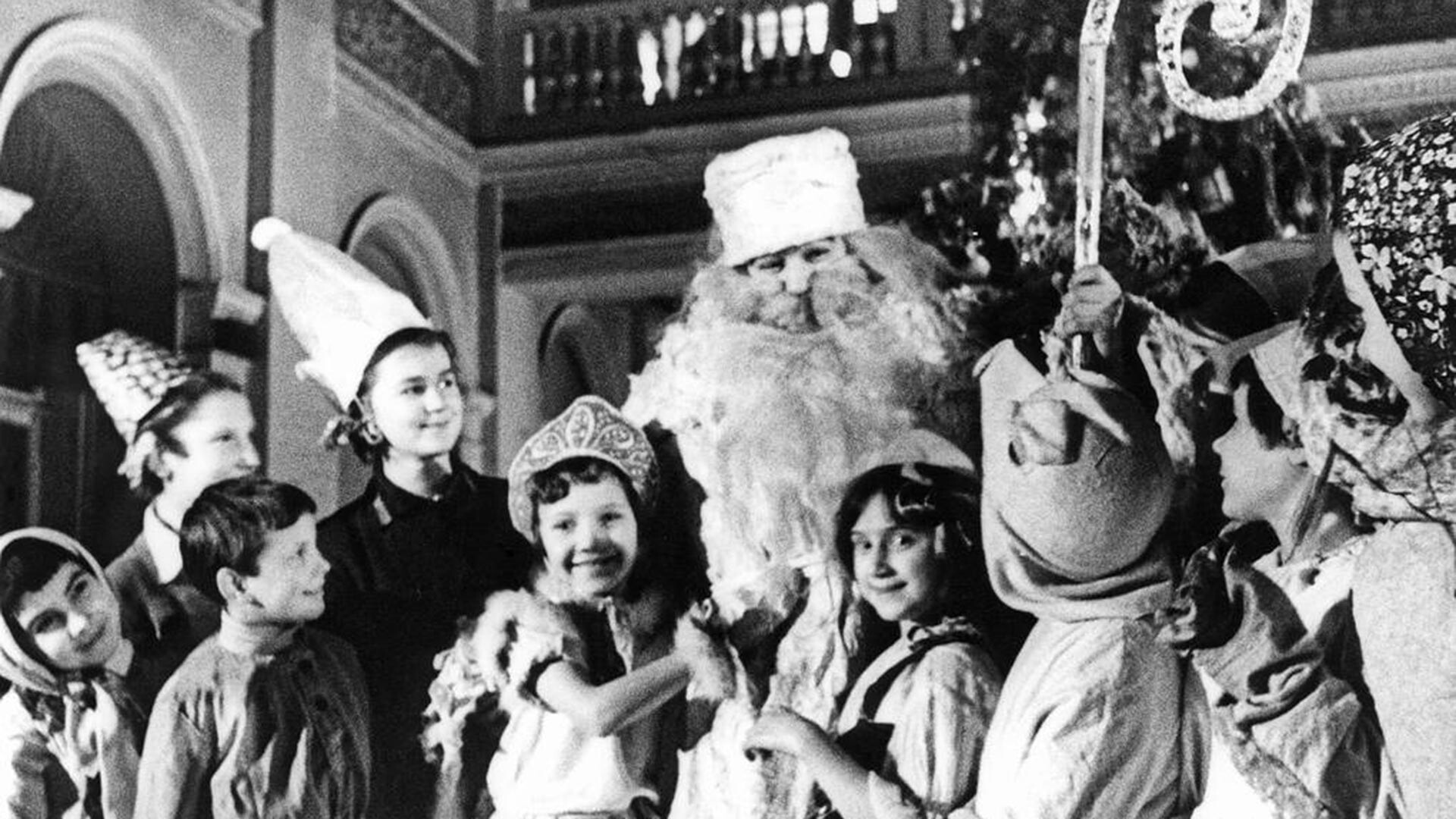 Celebrating the New Year at the Pioneers Palace.

“First, they showed us a concert, then they gave us soup – several noodles in a bowl of almost clear water – and vermicelli with a cutlet for the main course,” recalled schoolboy Isaak Bazarsky. “Since I was so very skinny, Alevtina Andreyevna divided one extra portion between me and another equally skinny boy. Apparently, someone could not make it to school and there was a spare portion... After that New Year party, I began to somehow get out of my nearly dying state, that get-together and the meal saved me.”

In one kindergarten, the children, seeing a Christmas tree for the first time in a very long time, felt a surge of energy and wanted to decorate it. To make the decorations, they needed glue and the teacher, having begged for some flour in the kitchen, prepared some flour paste and poured it into plates for the children. The kids, however, immediately ate it. So, she had to go to ask for more flour, but, in the end, they managed to decorate the tree that evening. 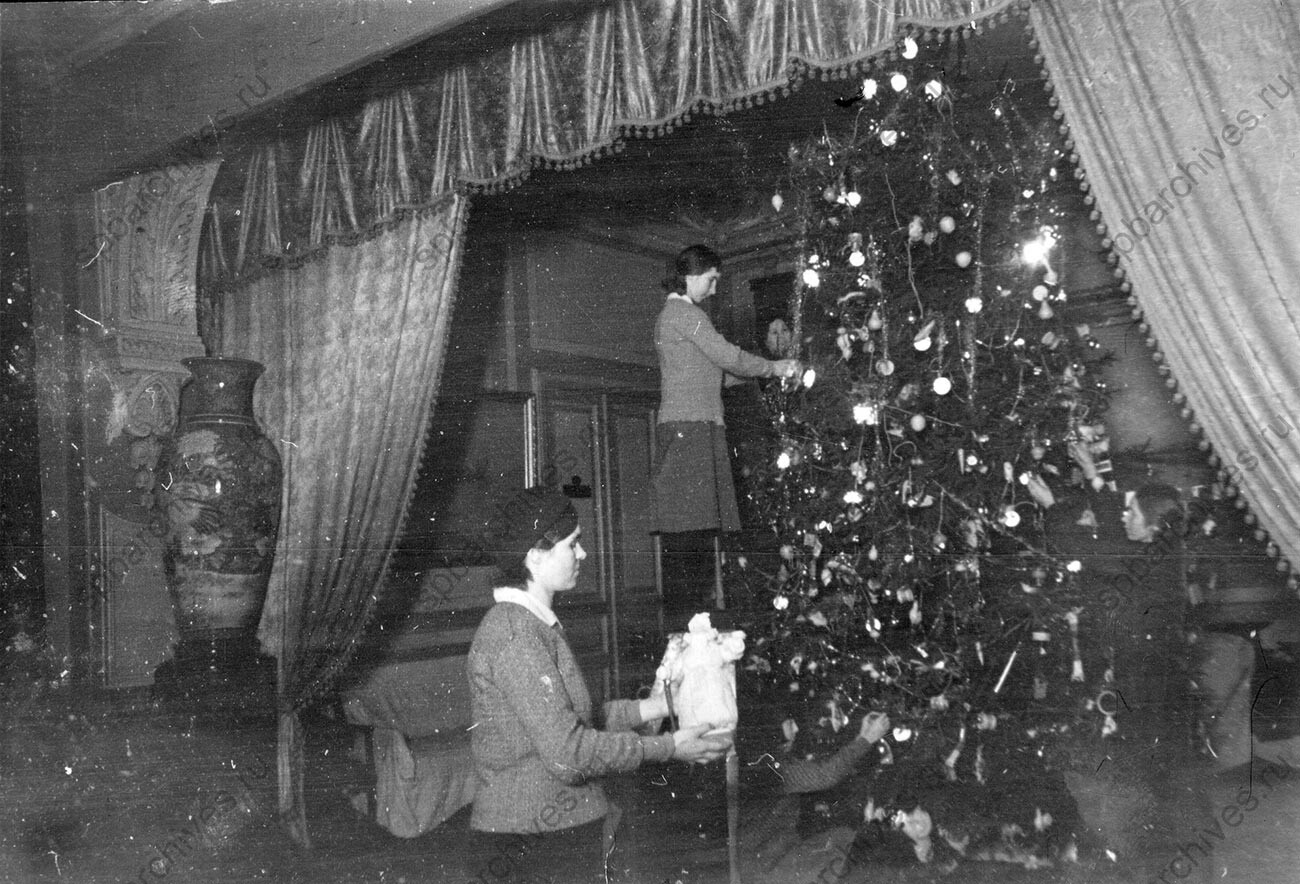 Celebrating the New Year at the House of the Navy.

The Central State Archive of Cinema, Photographic and Phonographic Documents in St Petersburg

“Polina baked one potato peel cake for each of us. I have no idea where she managed to get the peel from. I brought two cubes of wood glue, from which we cooked aspic and there was a bowl of ‘broth’ for each of us. In the evening, we went to the theater and watched a production of ‘Mashenka’. But it was not much fun, it was as cold inside as it was outside and all the spectators were covered in hoarfrost,” was how factory foreman Vladimir Fokin described one of the New Year festive days in the city.

“The piece of bread turned out to be small, weighing no more than 50 grams. A better gift could not have been imagined. The boys understood it and treated a piece of bread as the most precious delicacy. Bread was eaten separately from lunch dishes, as everyone tried to savor it for as long as possible,” recalled schoolboy Valentin Zvonarev. 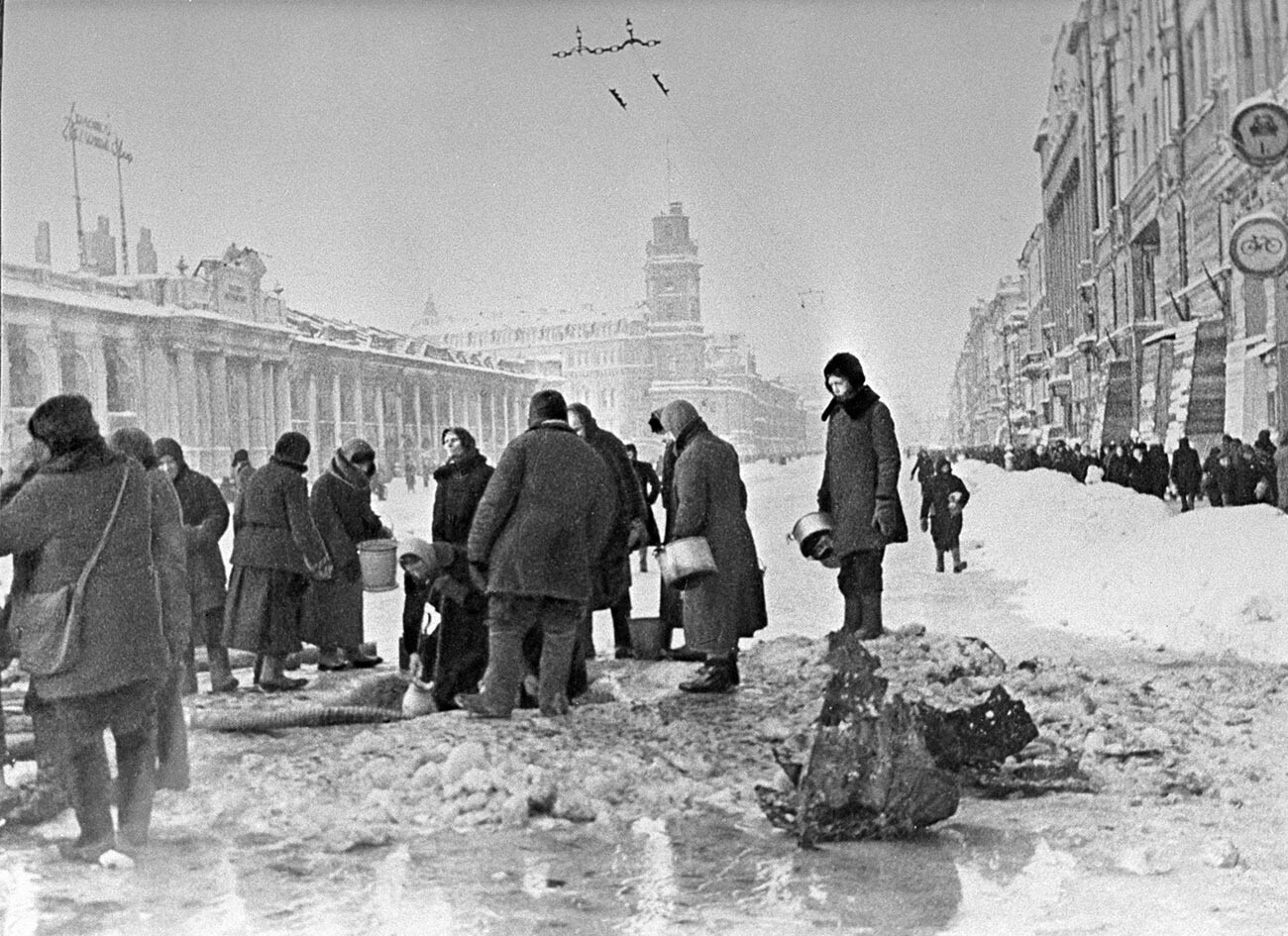 A real miracle for children was the appearance of tangerines in the hungry city. They had been sent from Georgia especially for the small residents of the besieged city.

Maxim Tverdokhleb’s truck, which was hurrying to deliver the exotic fruit along the ice of Lake Ladoga, came under fire from two Messerschmitts. Their bullets hit the radiator and the windshield and the driver himself was wounded in the arm, but he delivered the tangerines to their destination. When the truck was examined afterwards, there were 49 bullet holes in it. 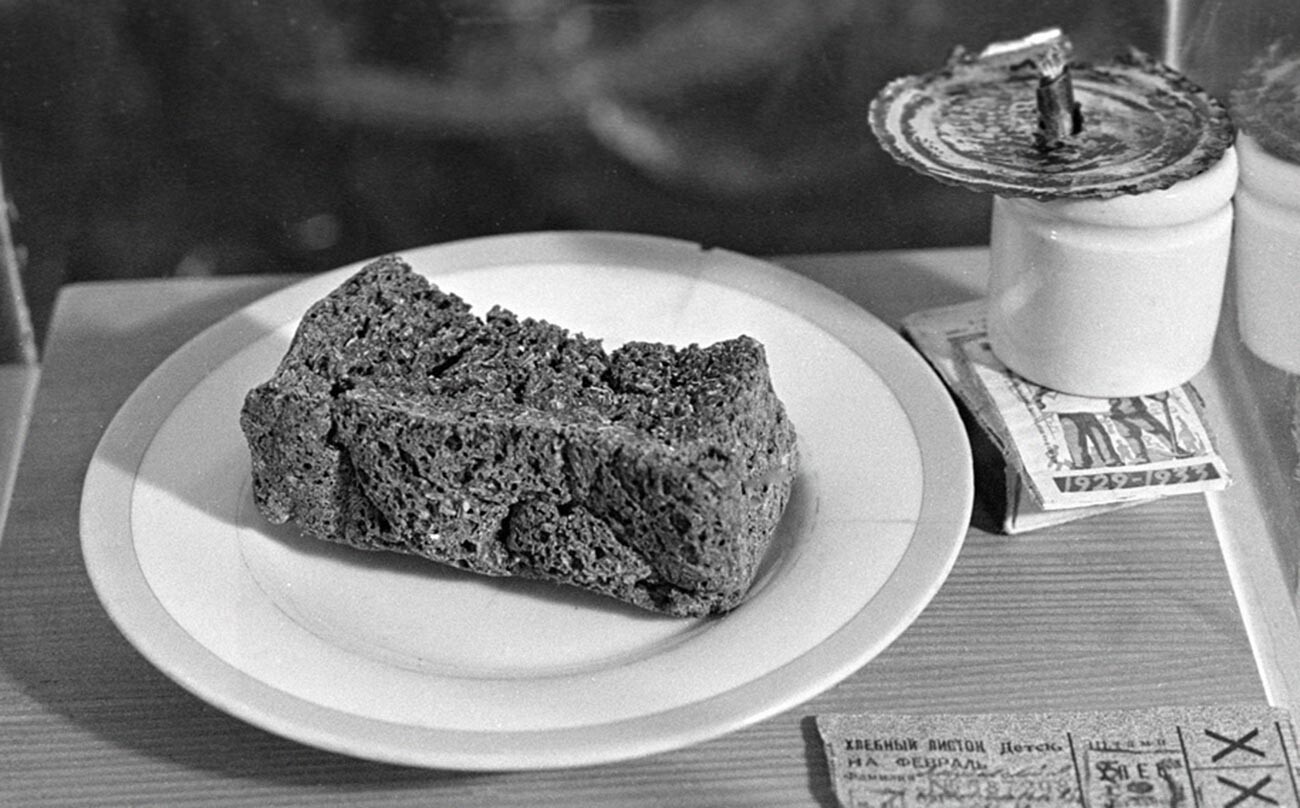 Another uplifting gift for Leningrad residents came from the Red Army. In a large landing operation in the east of Crimea in late December 2021, it liberated the cities of Kerch and Feodosia (however, by May 1942, the occupied bridgehead was lost). “When the radio reported this at 6:00 am (on December 31), we started jumping up and down on our beds. What a joy!” recalled Vera Ilyasheva, who was 20 at the time.

Not everyone, however, could work up a festive mood for the coming New Year. “That was the first time we celebrated the New Year that way: there was not even a crumb of black bread and instead of having fun around a Christmas tree, we went to sleep because there was nothing to eat. When, last night, I said that the old year was ending, I heard in response: ‘To hell with this year, good riddance!’ Indeed, I am of the same opinion and I will never forget the year 1941,” 16-year-old Borya Kapranov wrote in his diary. Sadly, he died in February 1942. 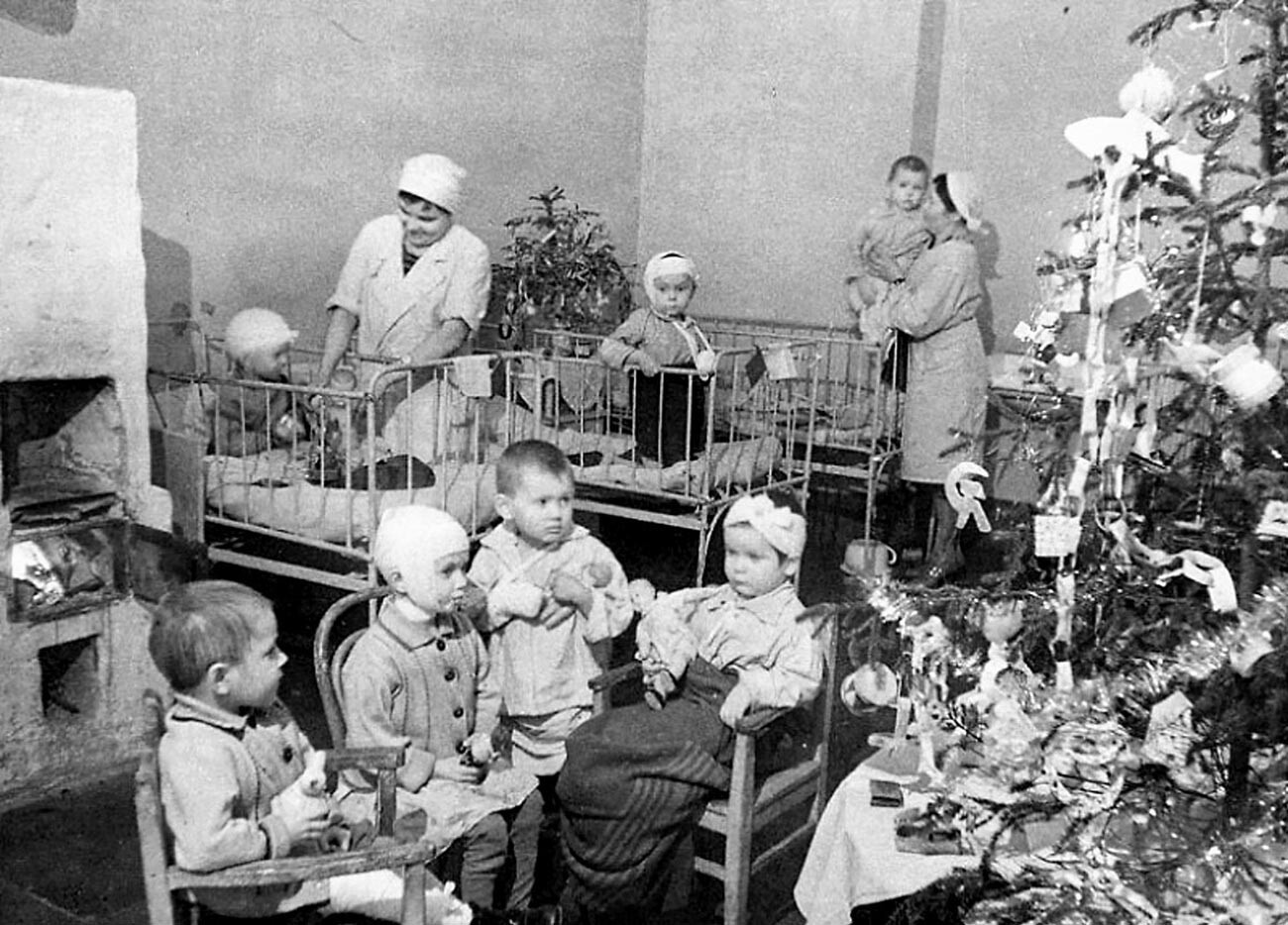 Celebrating the New Year at the Leningrad Children's Hospital.

Leningrad survived a horrific winter and, in the spring of 1942, began to slowly, but surely, come back to life. Farms for growing vegetables were set up in the suburbs, which helped improve nutrition and reduce mortality. City streets were cleared of garbage, the operation of public transport was partially restored and residential districts were supplied with electricity again (albeit for a limited amount of time).

Thus, the following New Year, 1943, was greeted by Leningrad residents with much more hope and joy than 1942. “This New Year’s Eve is very different from the last one,” the Leningradskaya Pravda newspaper wrote. “Our city looks different, too - the pulse of life is beating stronger, the sound of trams is ringing in the streets, there are cars darting around, the streets are not covered in snowdrifts and heaps of rubbish like they were last year. Factories and plants are operating at a military pace. Classes are under way in schools. Theaters and cinemas are open... There is running water and sewerage in practically all apartment blocks. And our people are different too - they have become stronger physically, they have become more cheerful, more experienced. This transformation of the city, this transformation of the people is the greatest achievement of the past year.” 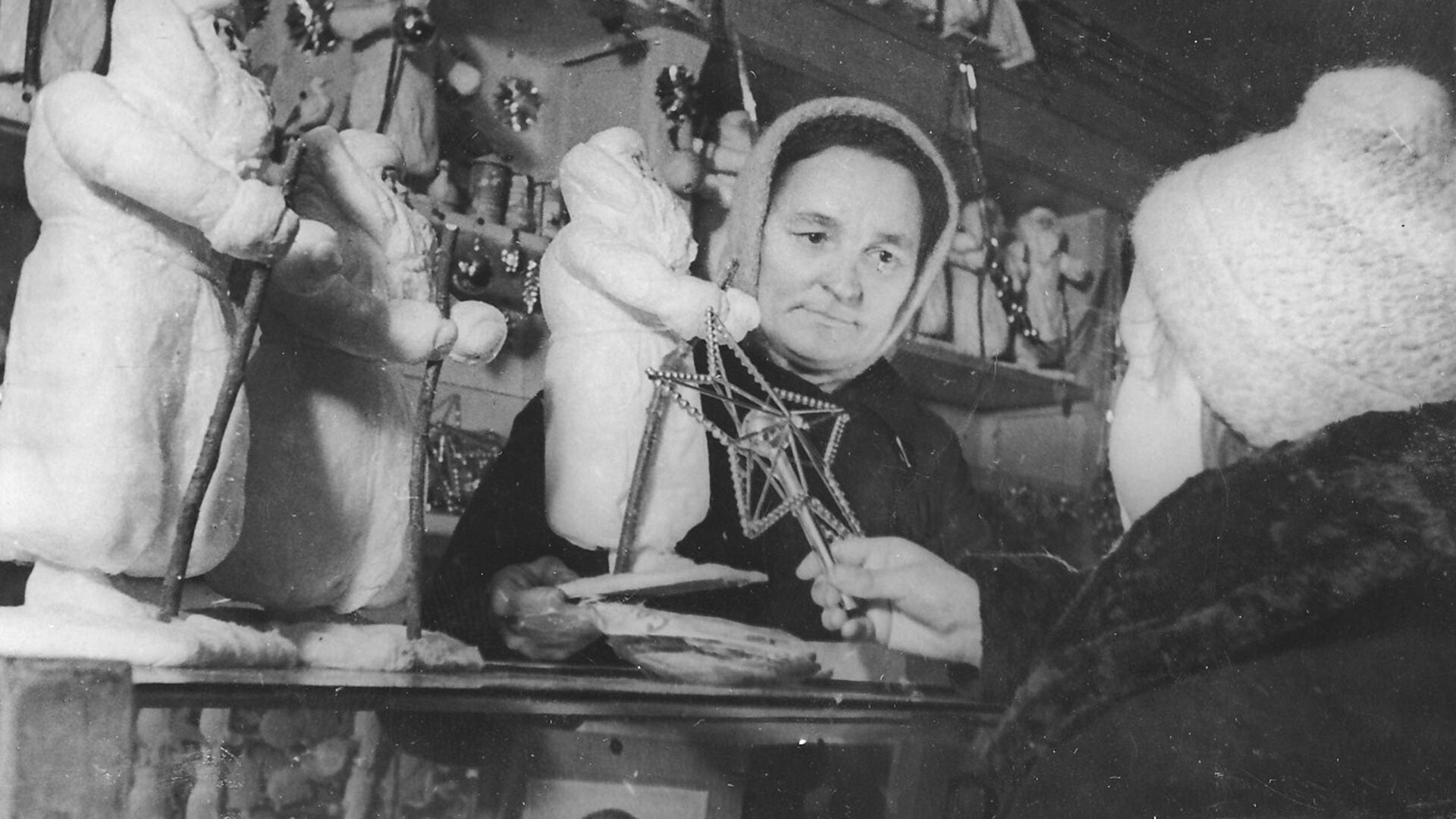 The Central State Archive of Cinema, Photographic and Phonographic Documents in St Petersburg

When listening to the news on the radio about the Germans’ defeat at Stalingrad in November-December 1942, residents of Leningrad believed that someday military success would be on their side, too. They did not have to wait much longer: already on January 18, 1943, during Operation Iskra, Soviet troops breached the siege and, on February 7, the first train from the “mainland” brought long-awaited food supplies to the city.