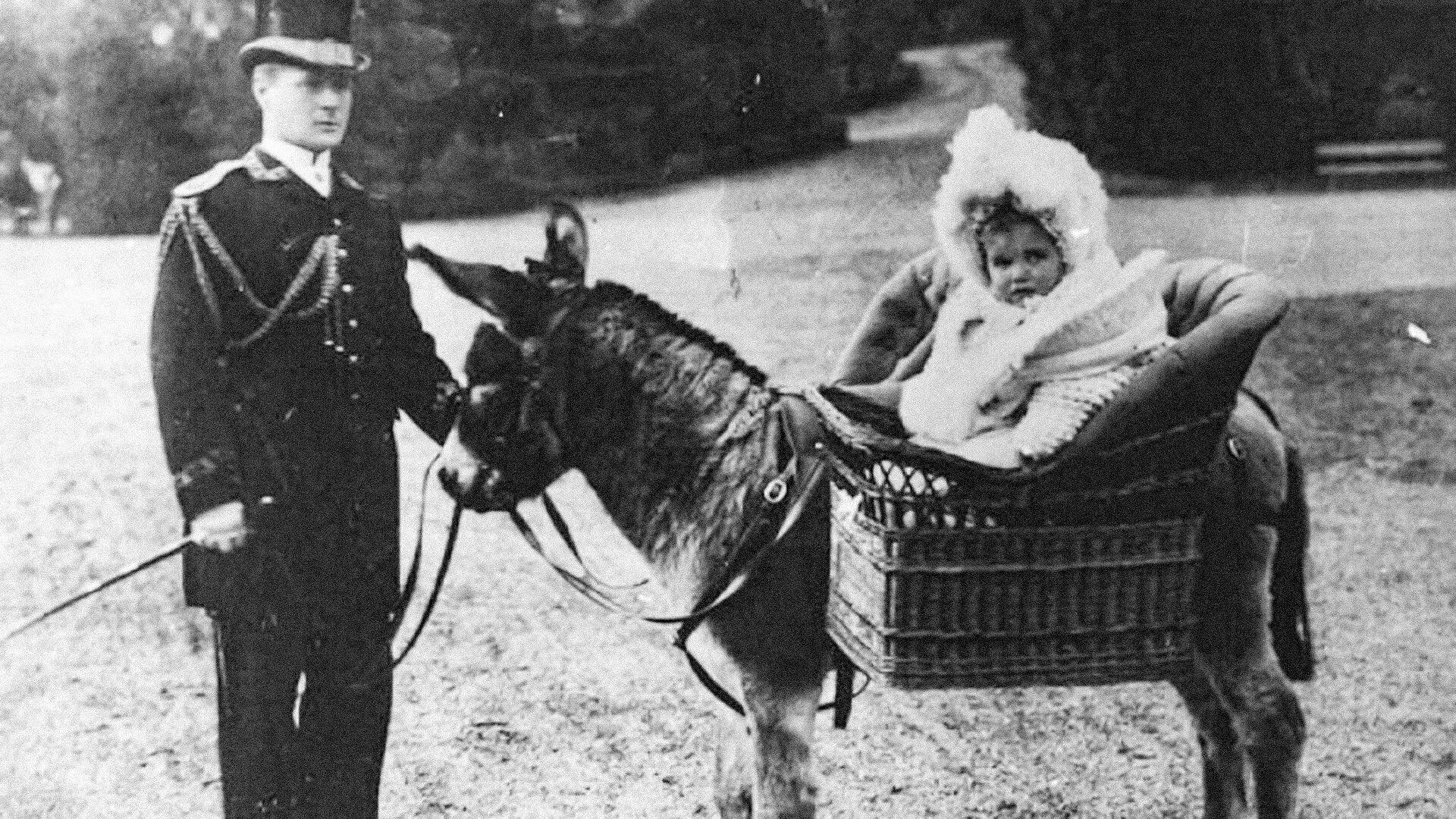 Boissonas & Eggler/Central State Archive of Film and Photo Documents of St. Petersburg
Peasants, workers, famous people and events crucial for the country that happened in the Russian Empire at the dawn of the 20th century.

One of the most ceremonial events of this year was the French President Émile Loubet’s visit to Russia in May. Pictured: the grand welcome of his carriage on its way to the tsar’s Winter Palace. 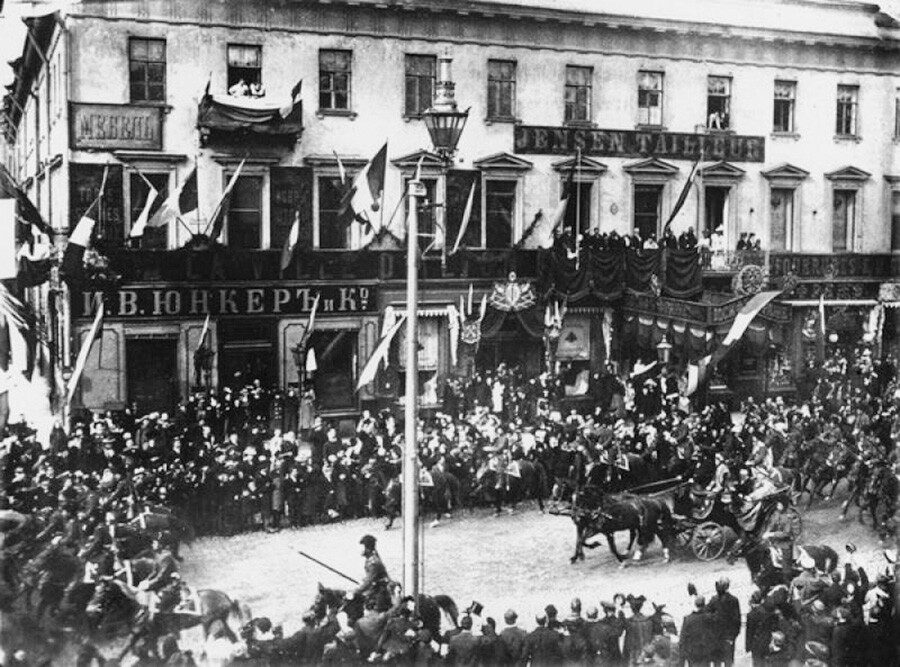 Another big guest of Russia was King Victor Emmanule III of Italy. 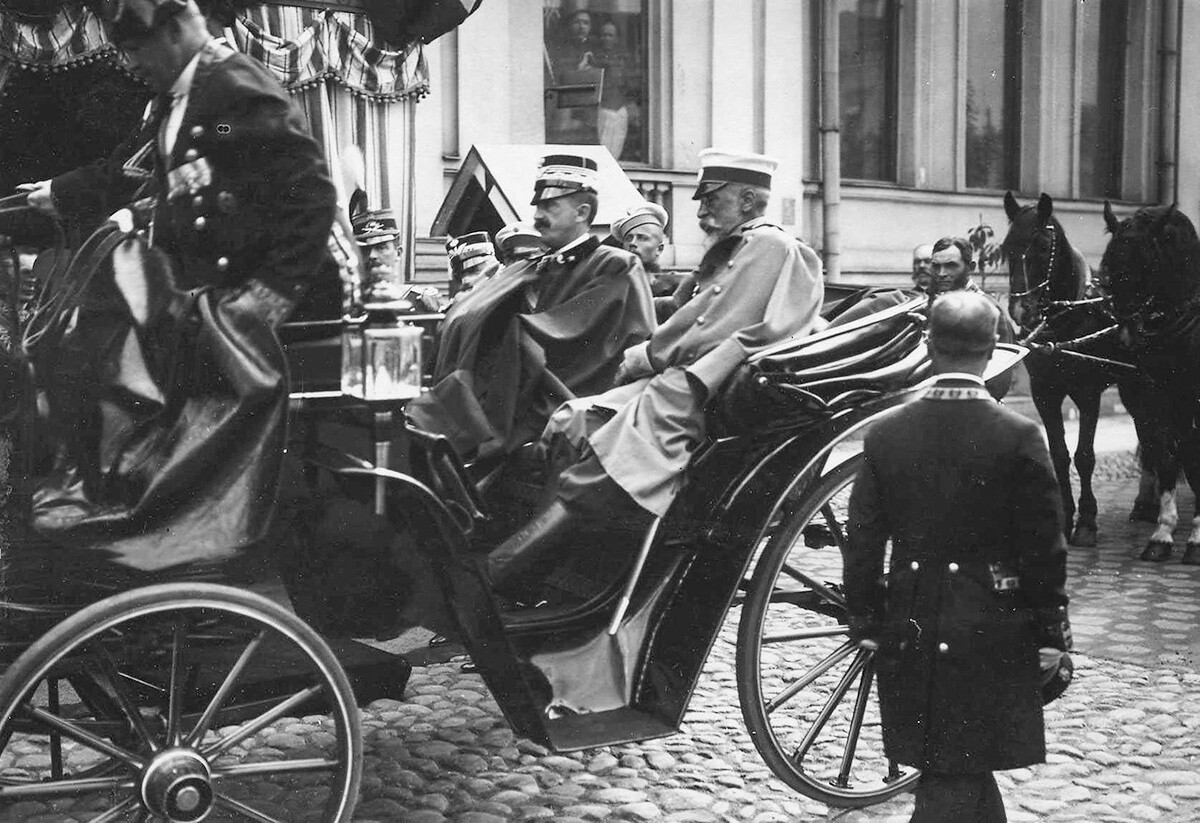 Emperor Nicholas II personally welcomed the Italian king. And while the Russian tsar would be killed in 1918, the Italian ruler even survived the Fascist regime. 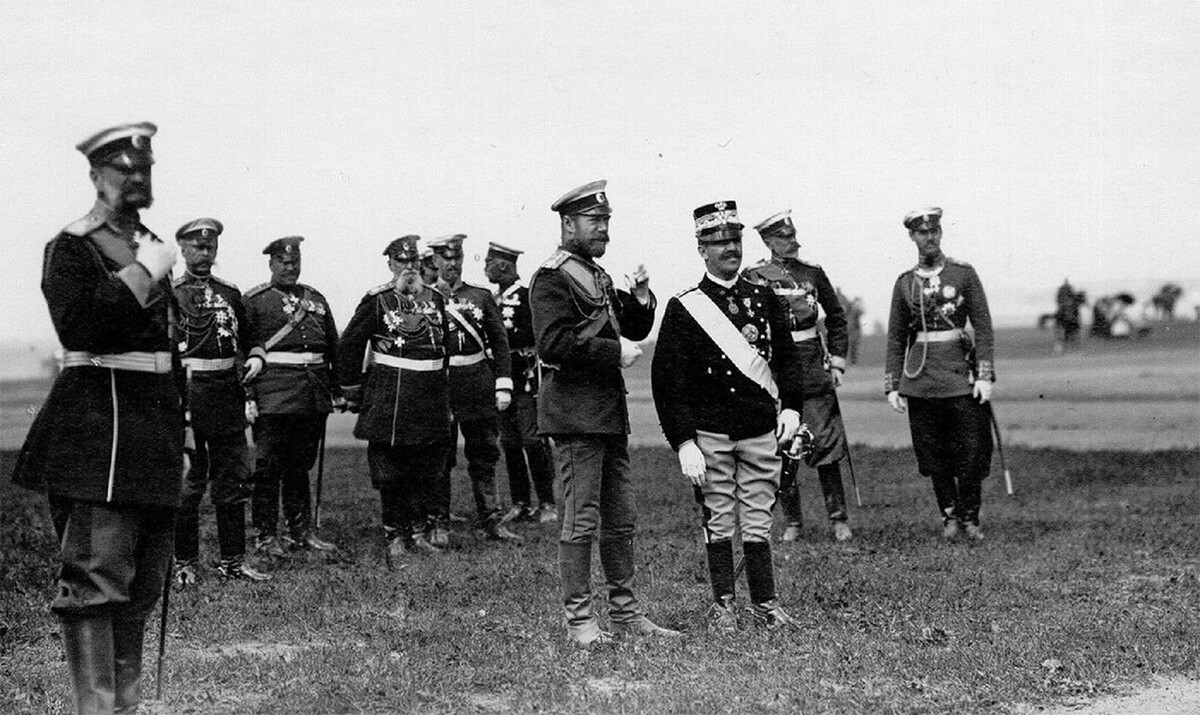 Up until 1902, Russian peasants were already freed from the serfdom, however, they were still tied to an ‘obshchina’, a village community with communal ownership of the land. They still had no documents and no money and little chance leaving the ‘obshchina’ or relocate. 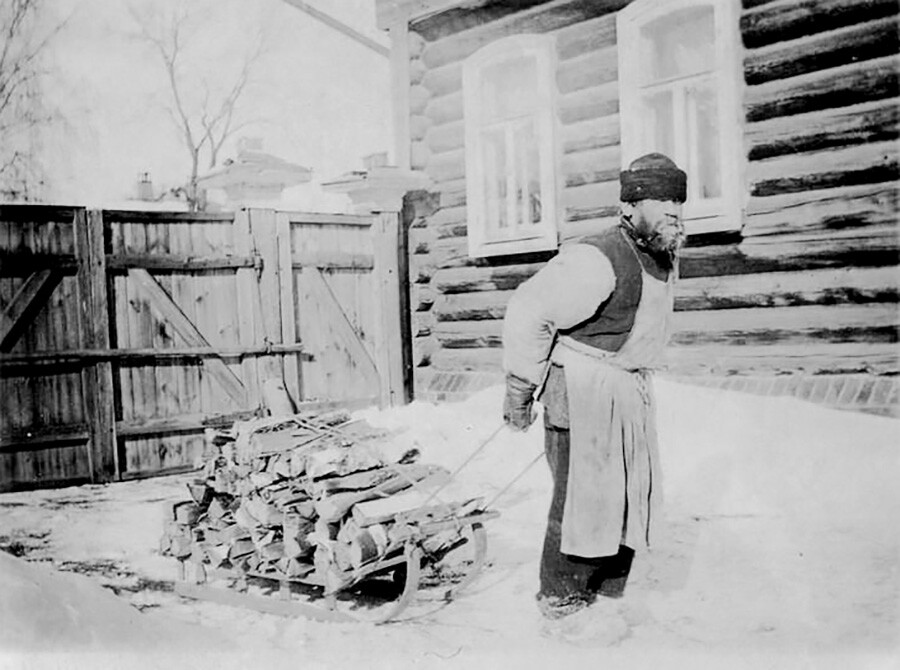 However, finance minister Sergei Vitte asked Emperor Nicholas II to give them more rights and powers. Pictured: Peasants of a Tula Region village after a Sunday service. 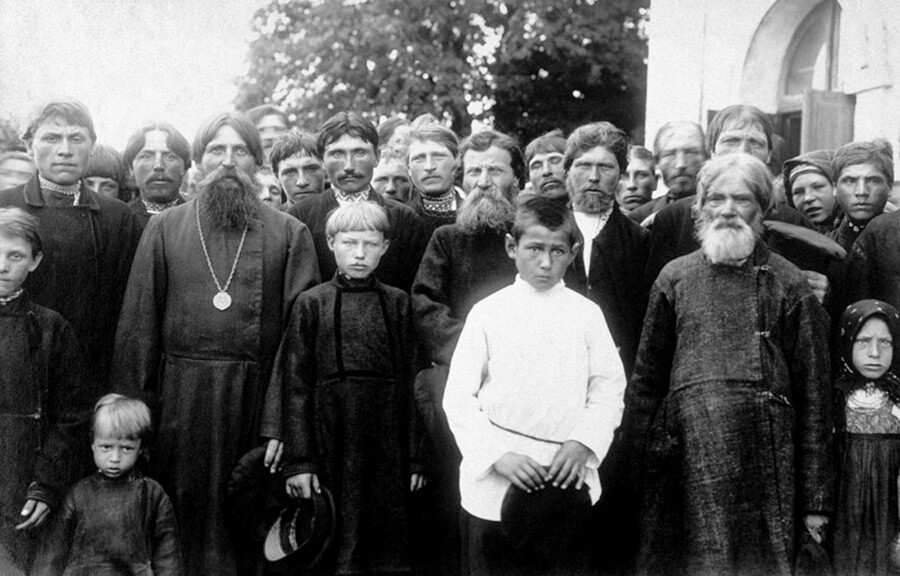 The Russian Museum of Ethnography/russiainphoto.ru

READ MORE: How abolishing serfdom led to the Russian Revolution

In the early 20th century, Russians still wore their traditional clothing. Pictured below are the wedding and ceremonial attire of Tula Region. 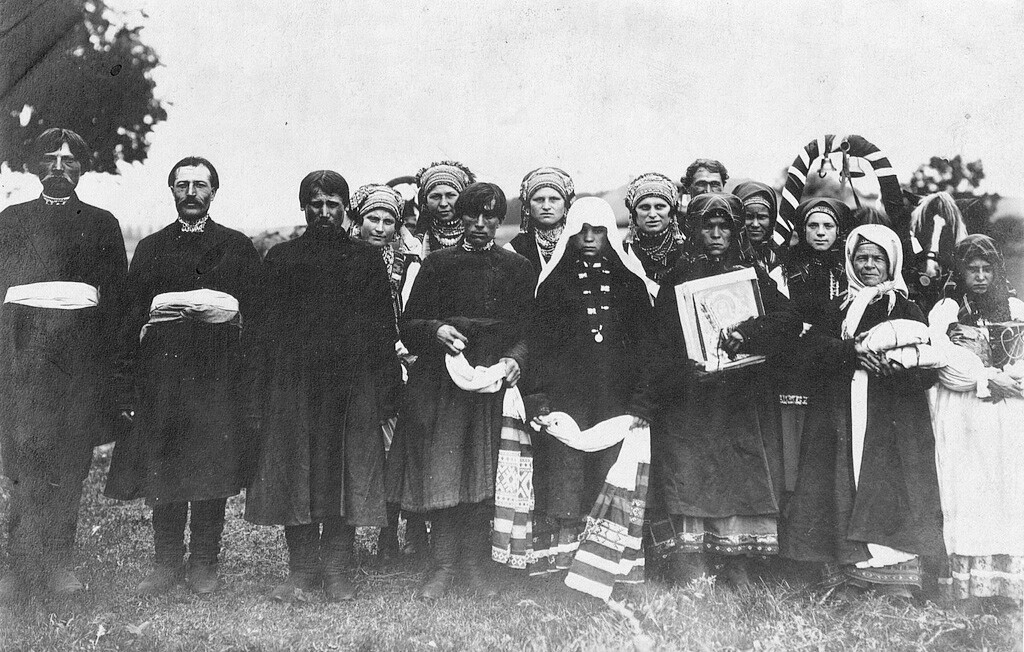 And here are carefree noblemen, drinking their tea in a summer countryside house, before all the revolutions, when they were forced to leave their houses, or even the country. 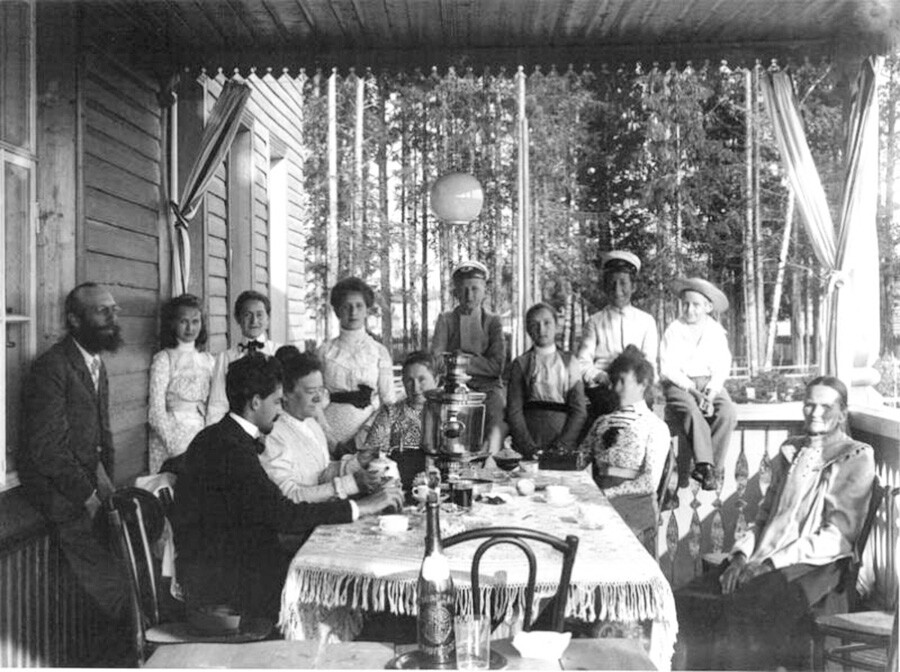 A portrait of Mathilde Kshesinska, the prima ballerina of the Imperial theaters and the true No. 1 star of St.Petersburg’s ballet scene and rumored to have been a mistress of future Emperor Nicholas II. 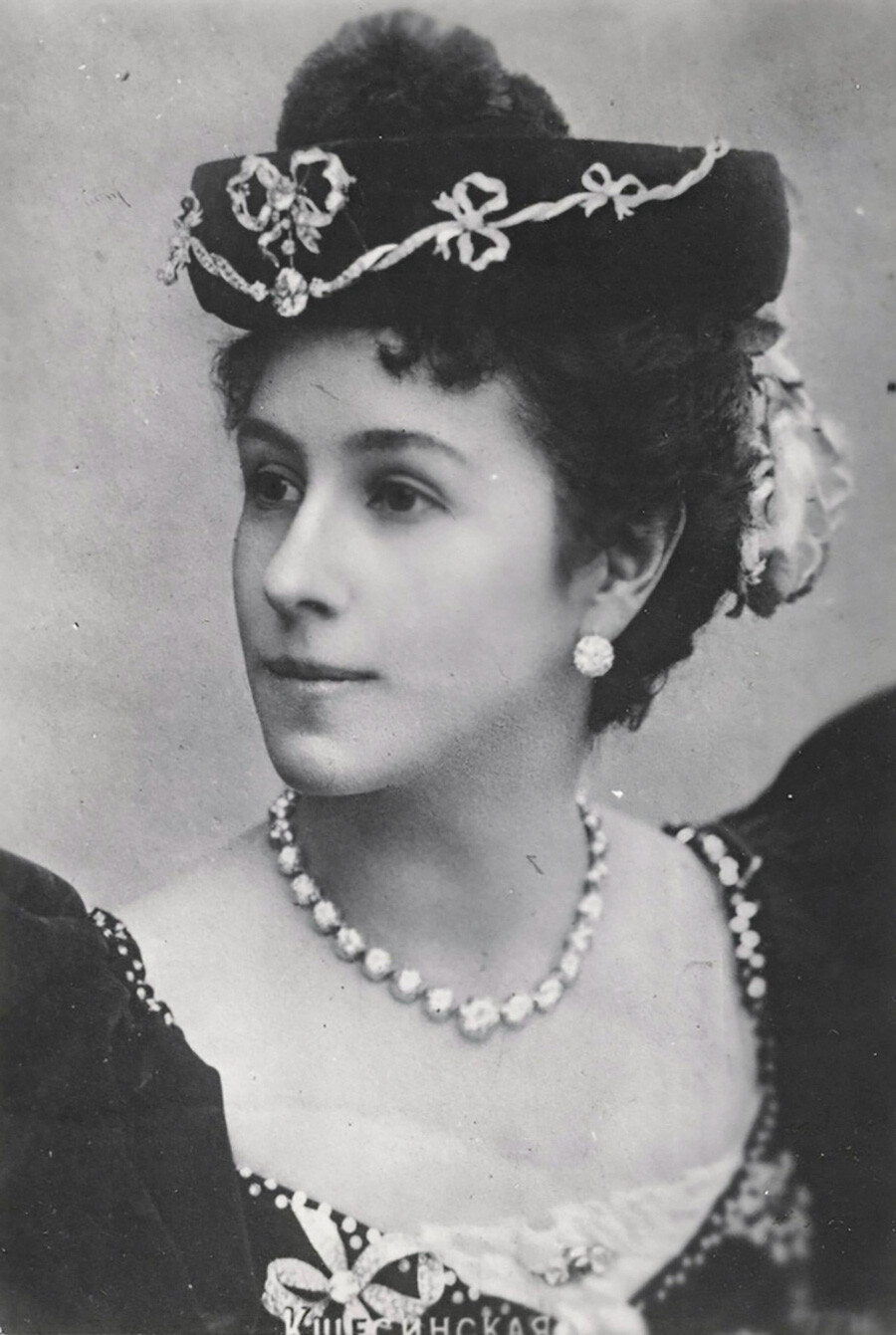 The Ministry of Internal Affairs staff, including the minister Vyacheslav von Plehve himself. In two years after several assasination attempts, he was killed by Socialist Revolutionary Party member named Yegor Sozonov. 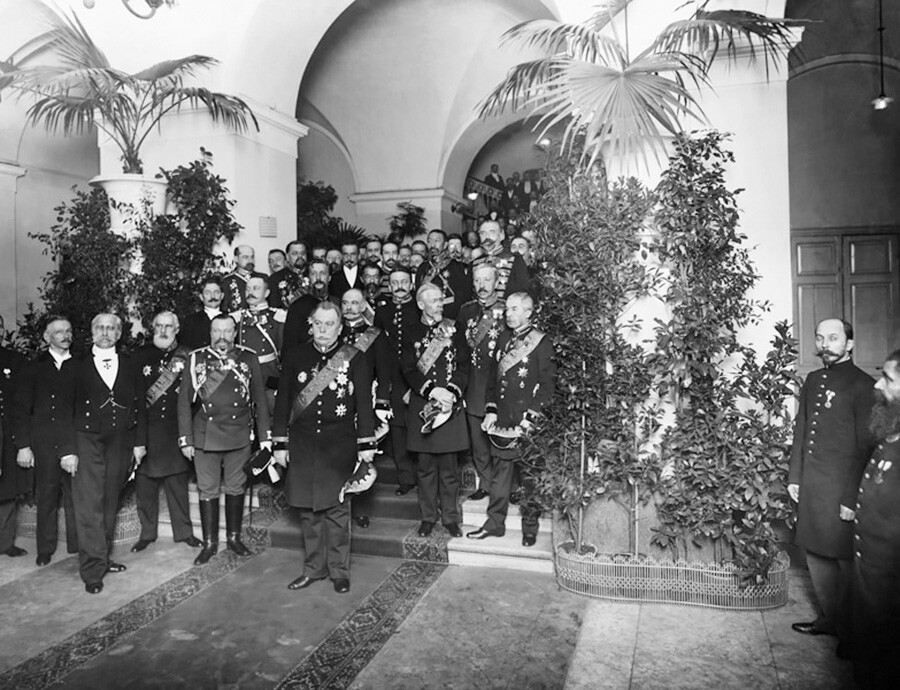 Below is the daughter of Nicholas II, Grand Duchess Anastasia, riding a donkey during a walk. 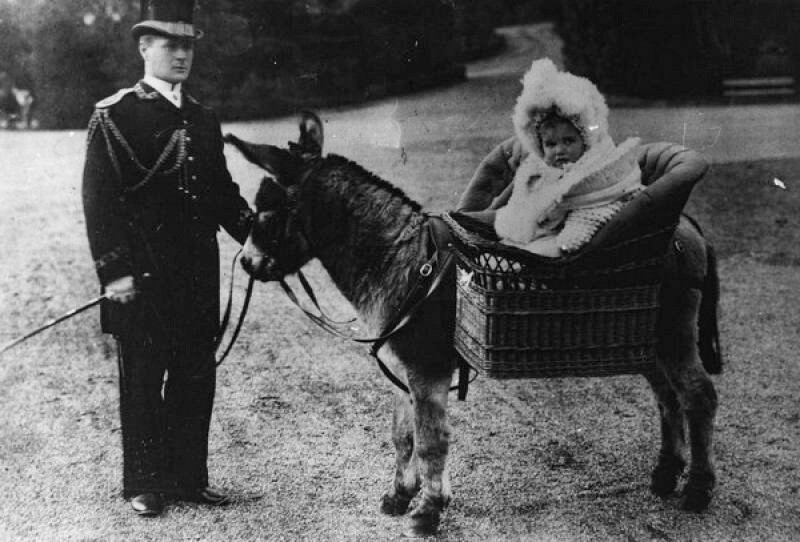 In 1902, a new protected cruiser dubbed ‘Askold’ was commissioned. It initially entered service with the Russian Baltic Fleet, but then was relocated to Port Arthur in Asia and, later, became a very active vessel during the Russo-Japanese War of 1904-1905. 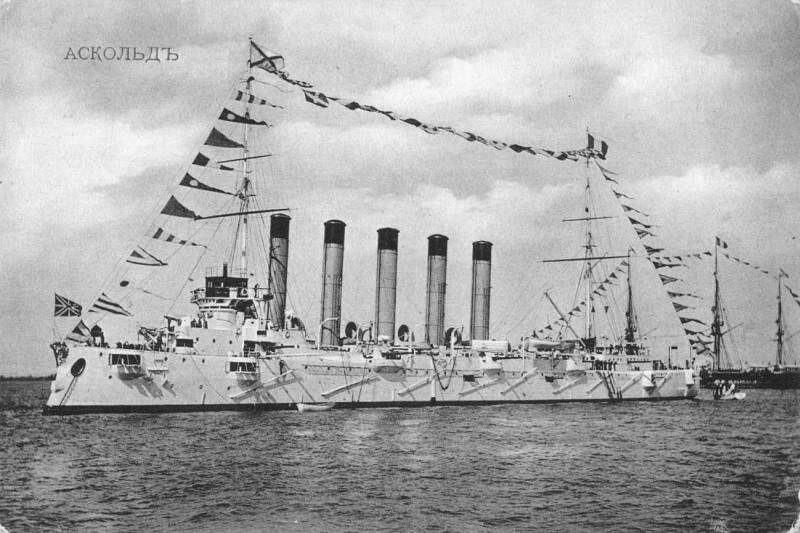 In 1902, the Imperial Army had a massive military exercises, or maneuvers, which were held not far from the city of Kursk. The Emperor Nicholas II attended and the war “game” was deemed a success, with the army showing its best skills. 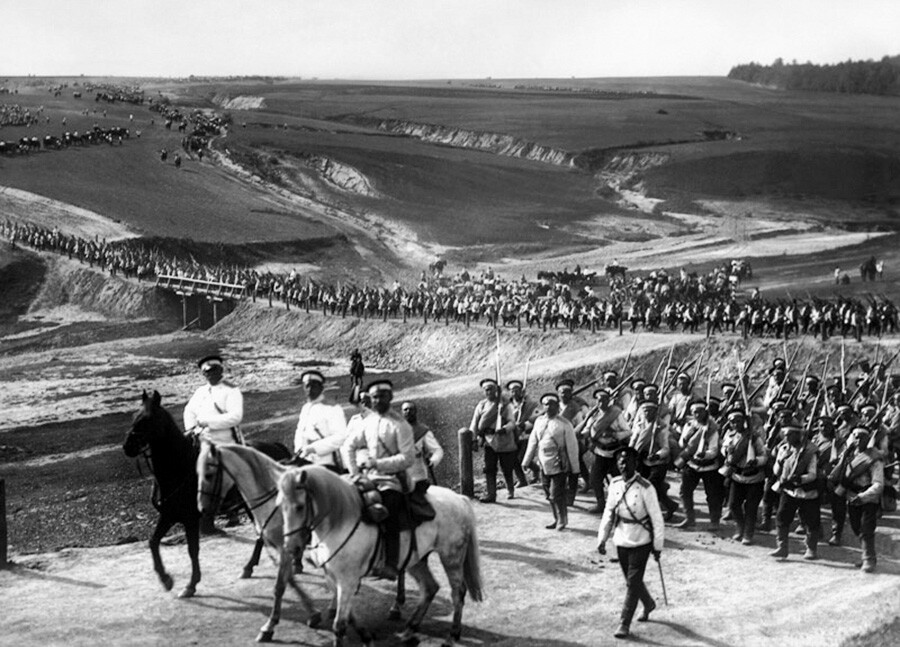 They have even lifted aerostats in the air! 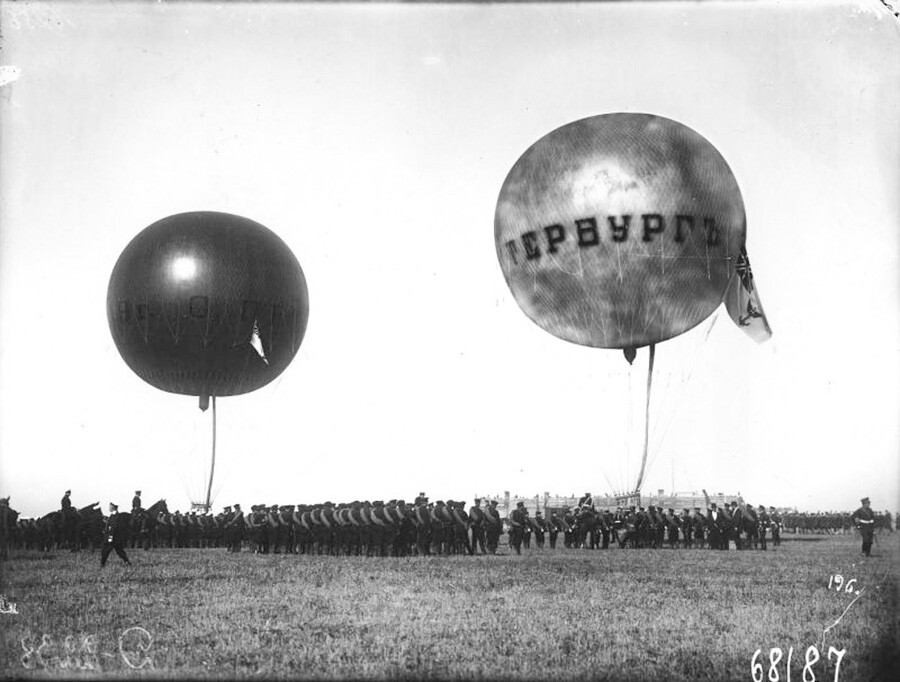 Immaculately dressed commanders’ staff at their dinner during the Kursk military exercises. Pay close attention to the uniform of the officer in the bottom right and read more about those small breast pockets here. 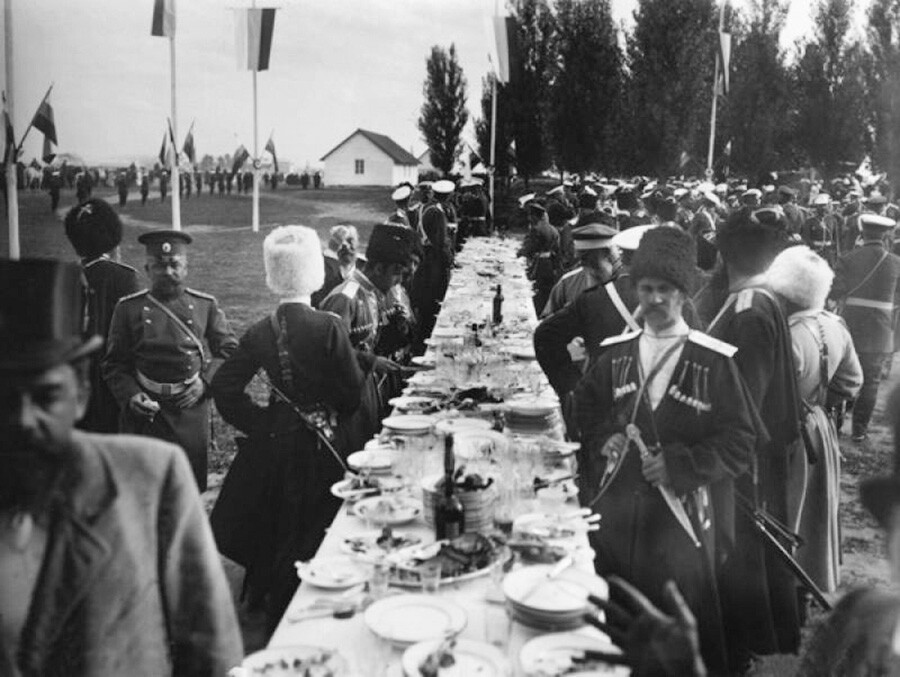 The first private non-studio photographs. This one pictures friends while walking in Kuntsevo estate and park in Moscow. It deserves to be posted on Instagram, doesn’t it? 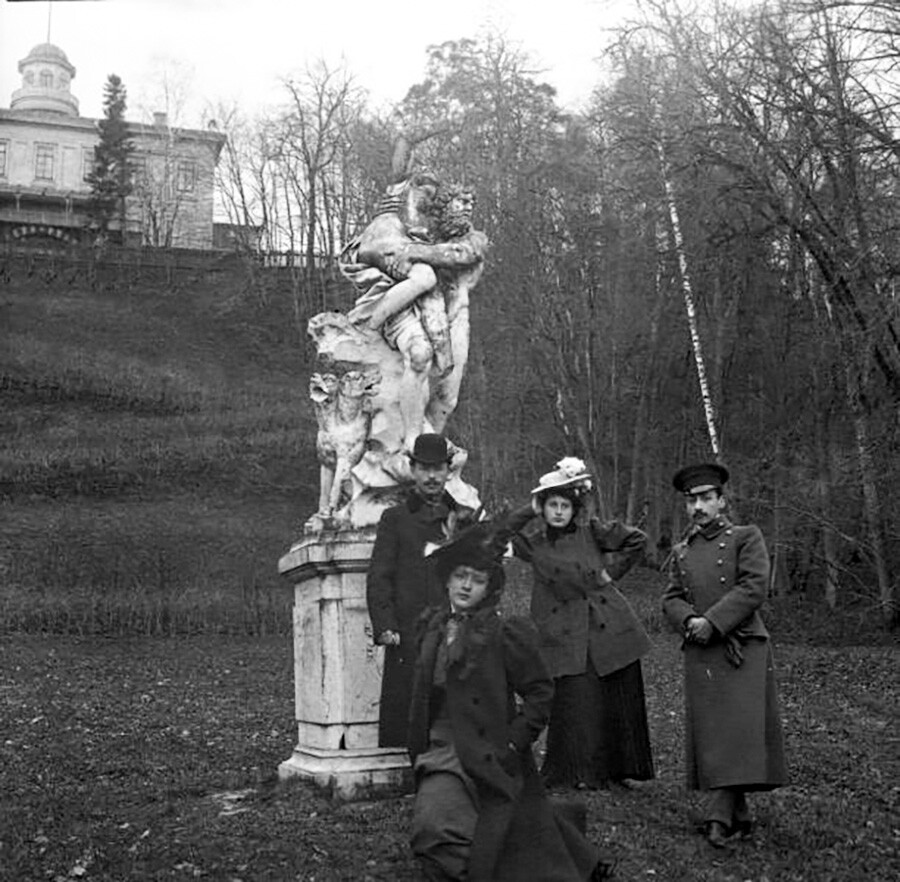 On February 13, 1902, the Russian Empire city of Shamakhi (now Azerbaijan) was struck by a massive earthquake, the biggest and the last one, so far. It destroyed 4,000 buildings, including the 10th-century Juma Mosque. More than 3,000 people died and remained under the rubble, while the rest of citizens had to leave the city looking for a new place to live. And camels were their transport. 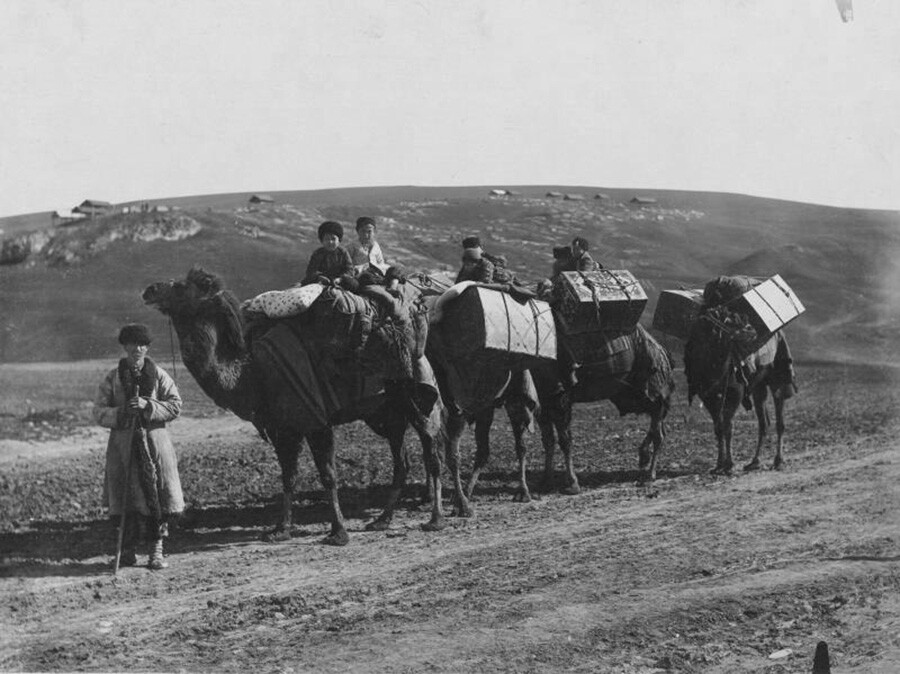 During this year, the first fame came to Maxim Gorky, the praiser of the first Russian Revolution. In 1902, he wrote his famous play titled ‘The Lower Depths’ about a night shelter for homeless people, which was immediately staged by Konstantin Stanislavsky at his Moscow Art Theater and became very popular both in Russia and Europe (the German version was staged in Berlin 300 times in a row). He’s pictured below with family the same year. 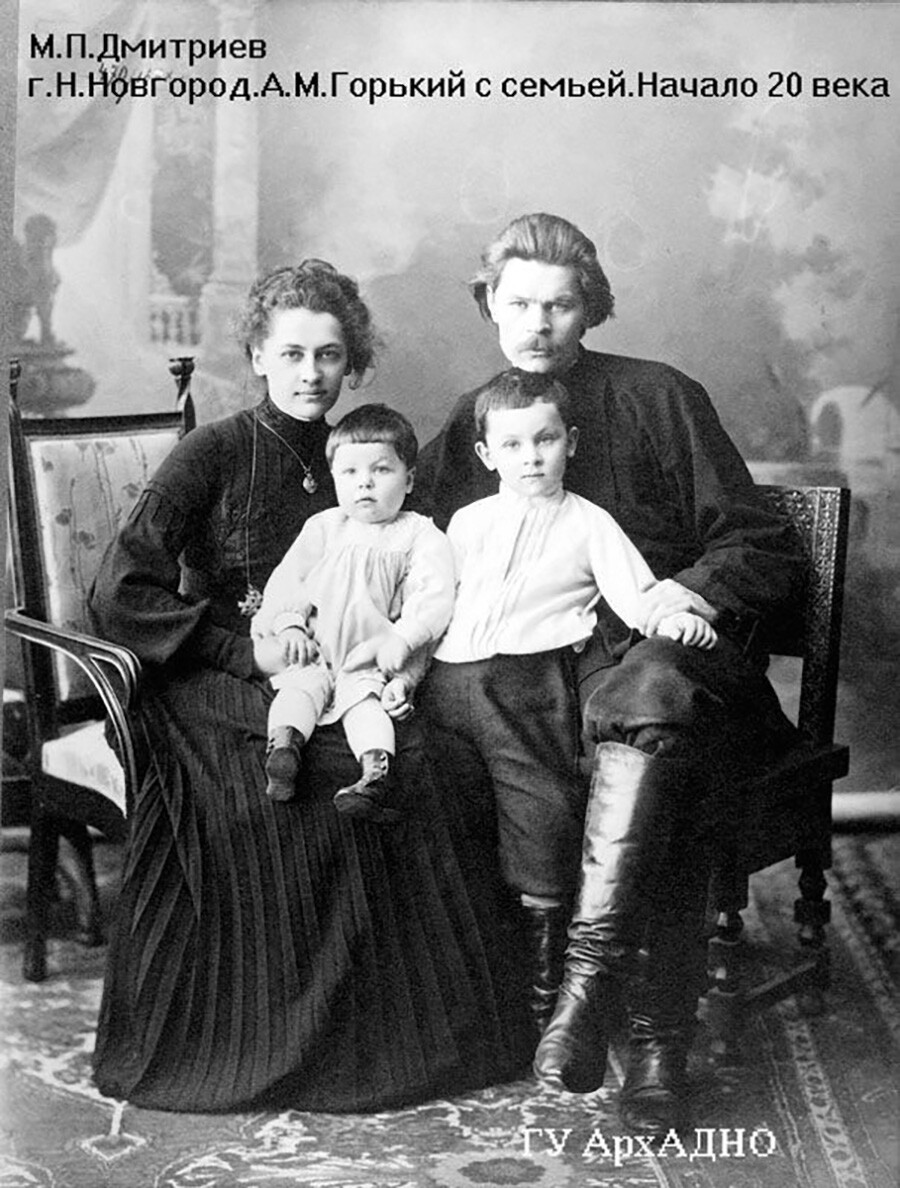 Leo Tolstoy was surprised when Gorky’s play had such a success. He was one of the first readers and his first impression was, “Why are you writing this?” Well, maybe he was just jealous? Anyway, in 1902, Tolstoy also got seriously ill: he caught pneumonia and, after that, typhoid fever. However, he recovered from both diseases. 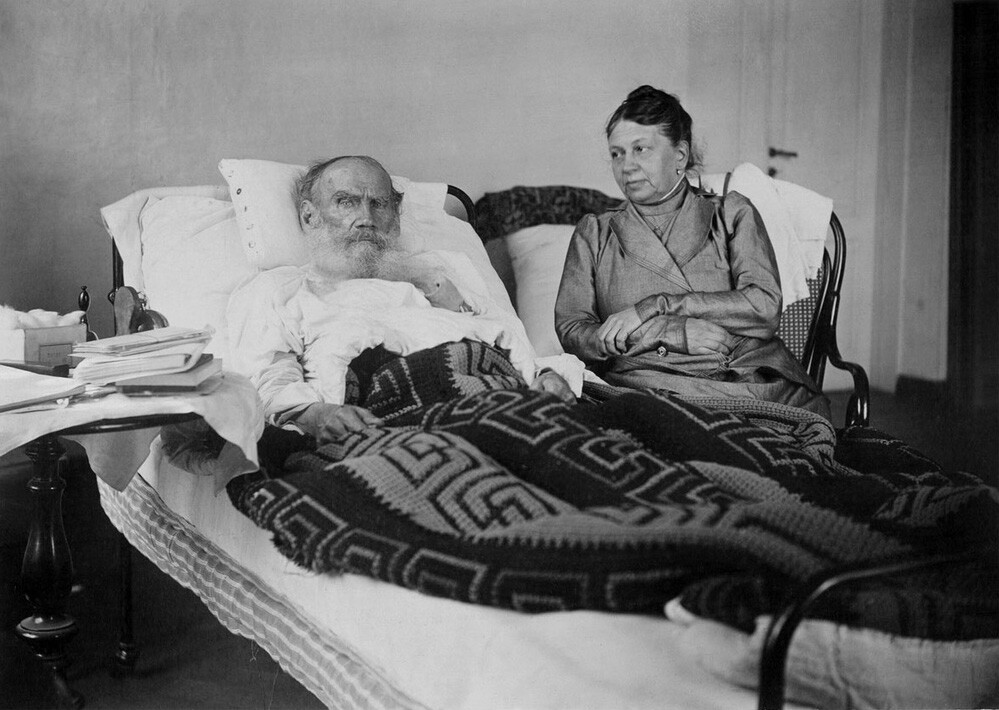 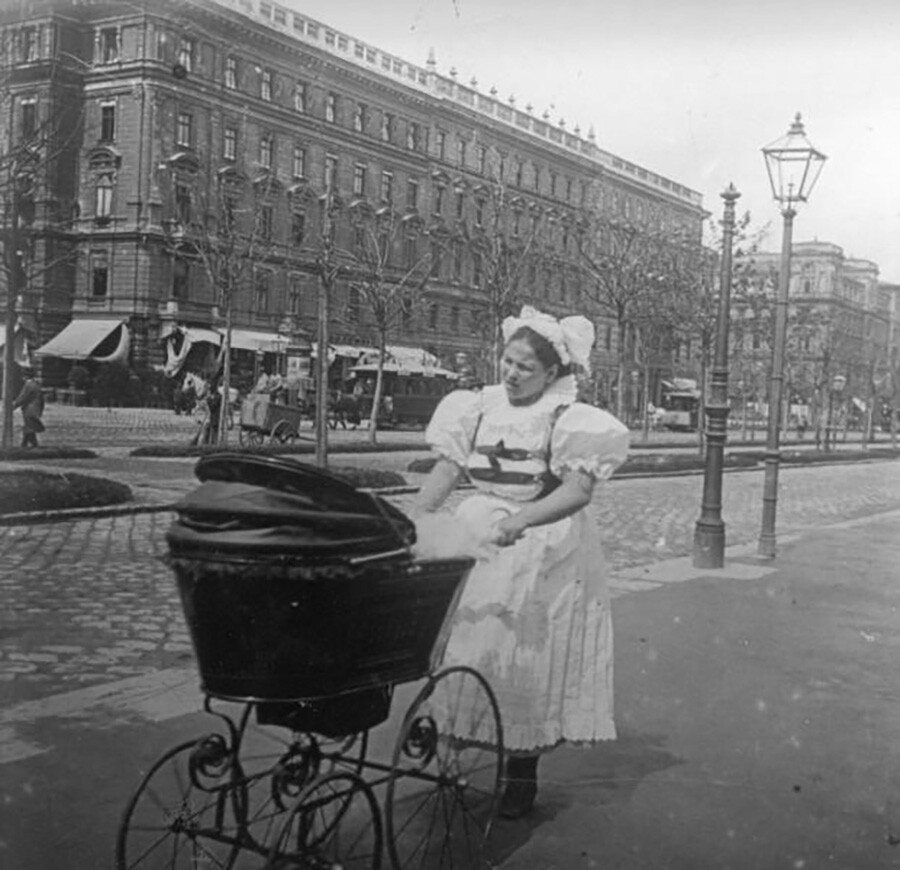 Pictured below is the amateur orchestra of the Urals ‘Satka’ factory, consisting of engineers, workers, accountants and other employees. There was also an amateur theater within the factory. One could say it was the beginning of the rise of the Russian worker class. 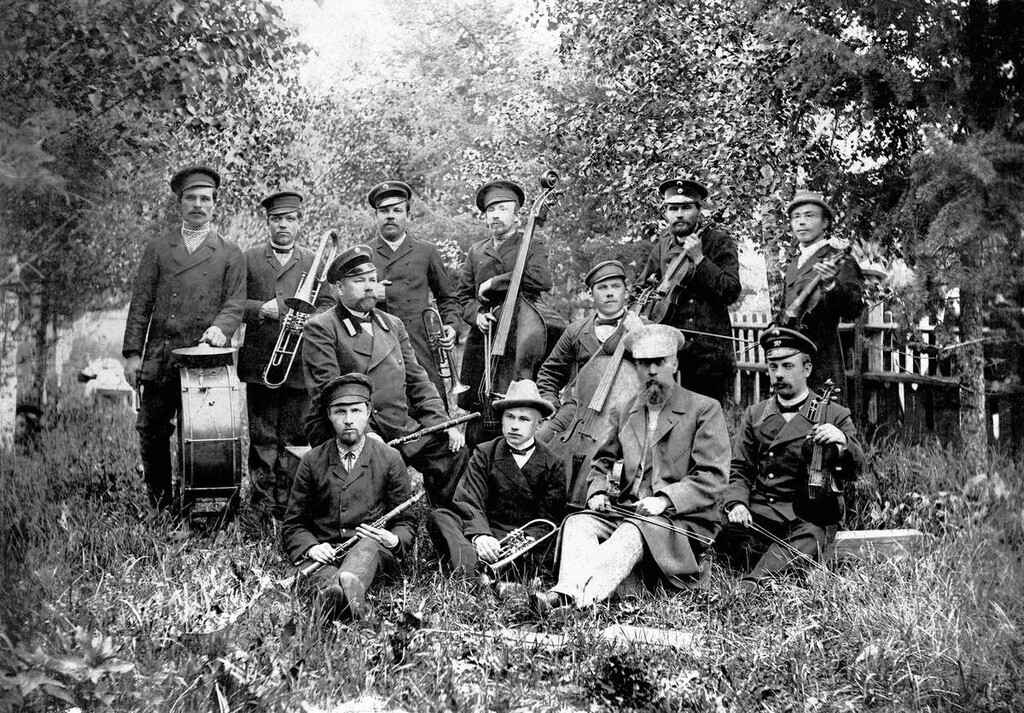 And here’s one of the Satka factories’ mines. The ore was excavated manually. Women and children labor was also actively used. 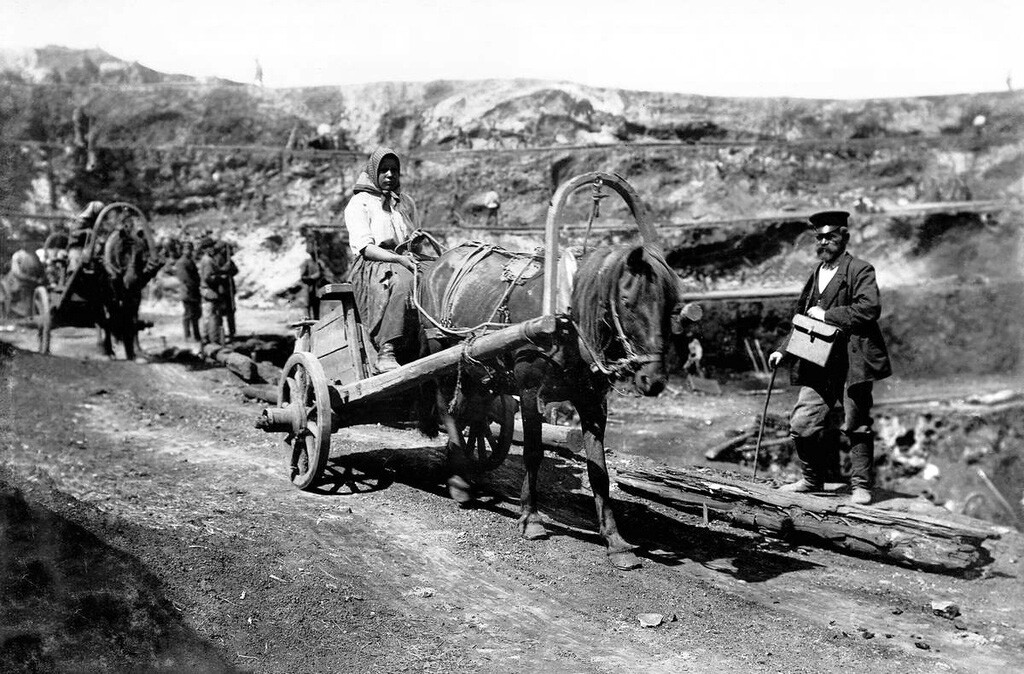 The Sakhalin Island was then infamous as a place of life-long labor and exile. In 1902, the first female photographer, Agnia Diness, visited that place and took a series of photos. The one below features the washing of gold-bearing sand. (Check out more photos of her Far East expedition here) 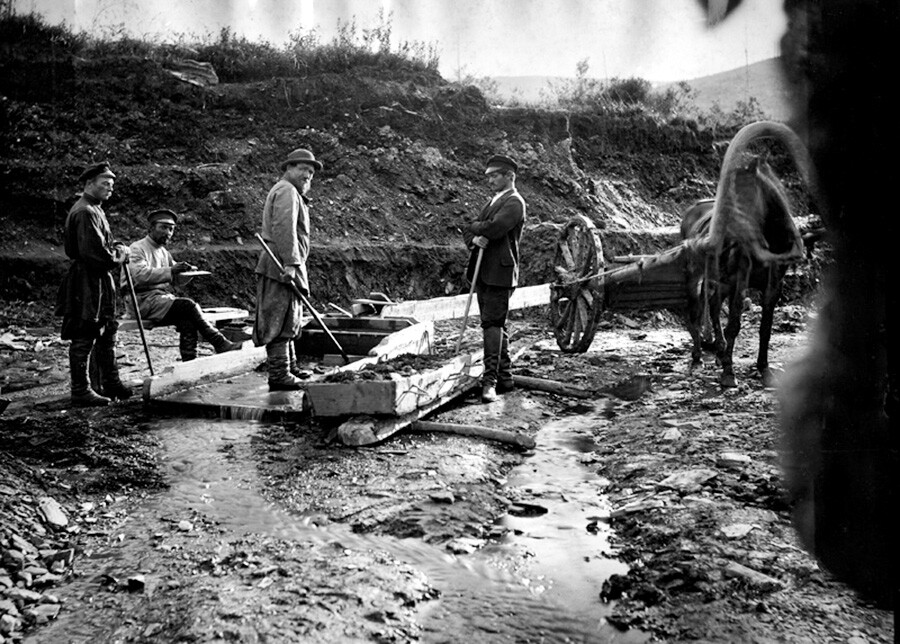 While the first Revolution would only happen in three years, and the 1917 Revolution even later, Joseph Stalin had already started his revolutionary activity and was fighting for workers’ rights. Already a member of the Russian Social Democratic Labor Party (future Bolshevik), in 1902, he was arrested and imprisoned for the first time, with more arrests to follow. This mugshot was taken by the police. 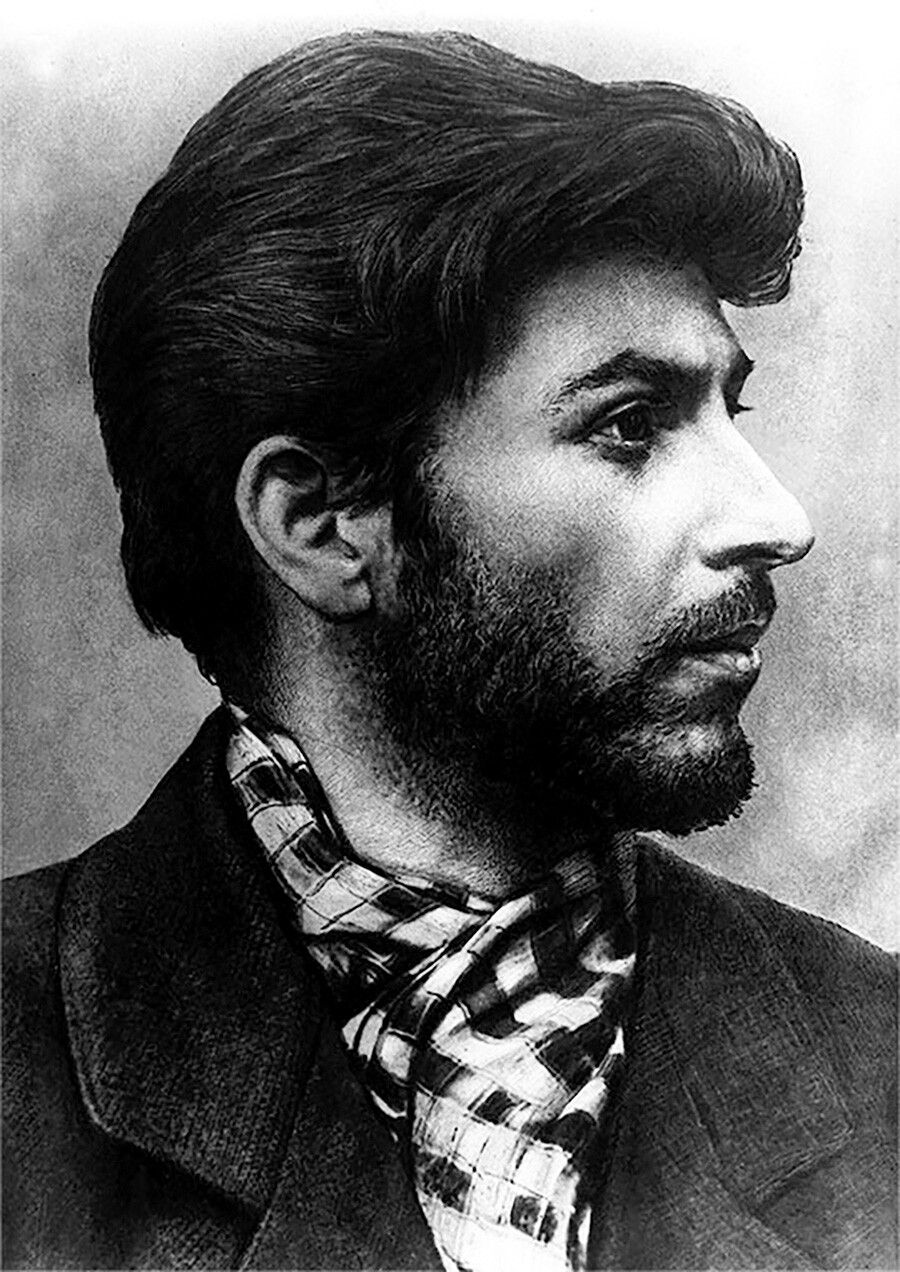 And, on November 25, 1902, Russia saw the first ever political strike of workers in Rostov-on-Don. 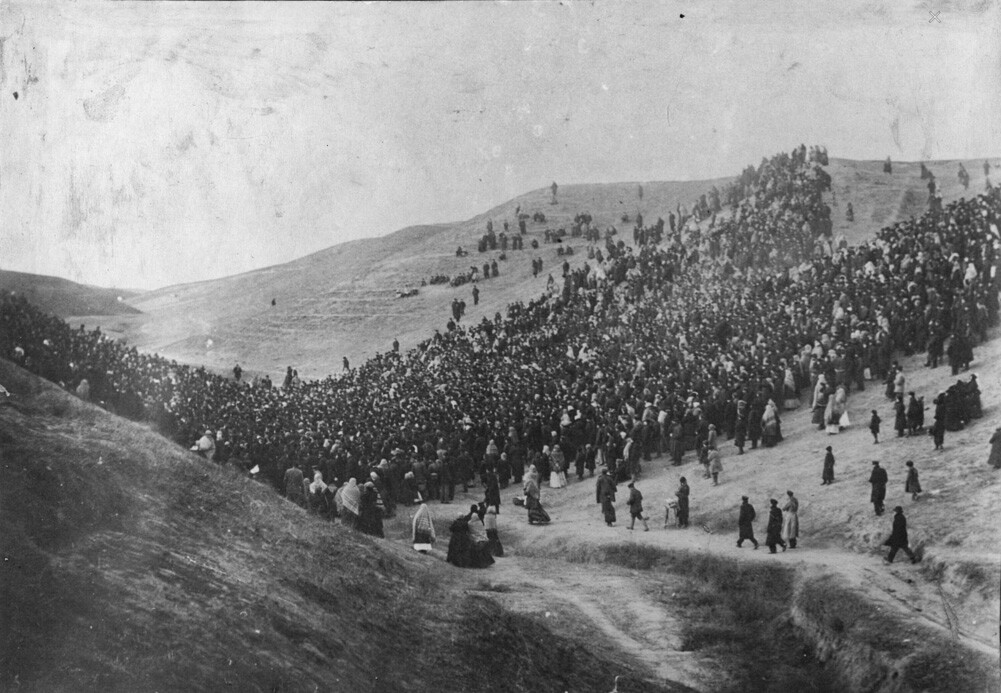