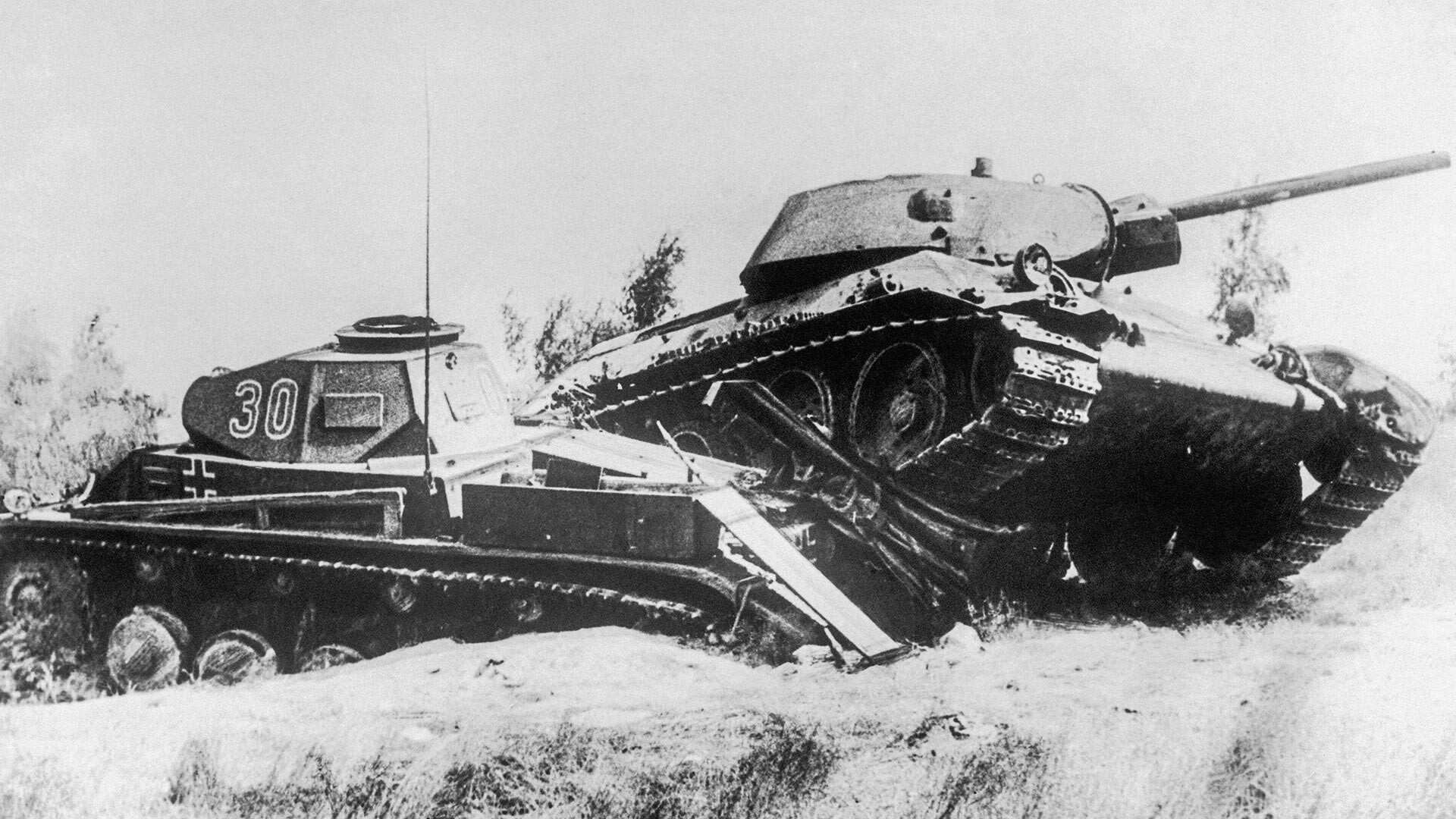 Daily Mirror Library/Mirrorpix/Mirrorpix via Getty Images
Ramming a heavy enemy tank could result in the deaths of an entire Soviet tank crew. Nevertheless, Soviet tank crews opted for this desperate measure hundreds of times in the course of World War II.

In World War II, tanks frequently used their powerful hulls to smash through street barricades and brick walls and to bulldoze enemy vehicles, artillery pieces and aircraft at airfields. But it was quite another matter to ram heavy enemy tanks. Only the most courageous and resolute crews undertook such a death-defying tactic. And some even decided to ram a whole armored train.

The history of tank rammings can be traced to the period of the Civil War in Spain. Soviet troops fighting on the Iberian Peninsula on the Republican side were the first in the world to adopt the tactic. 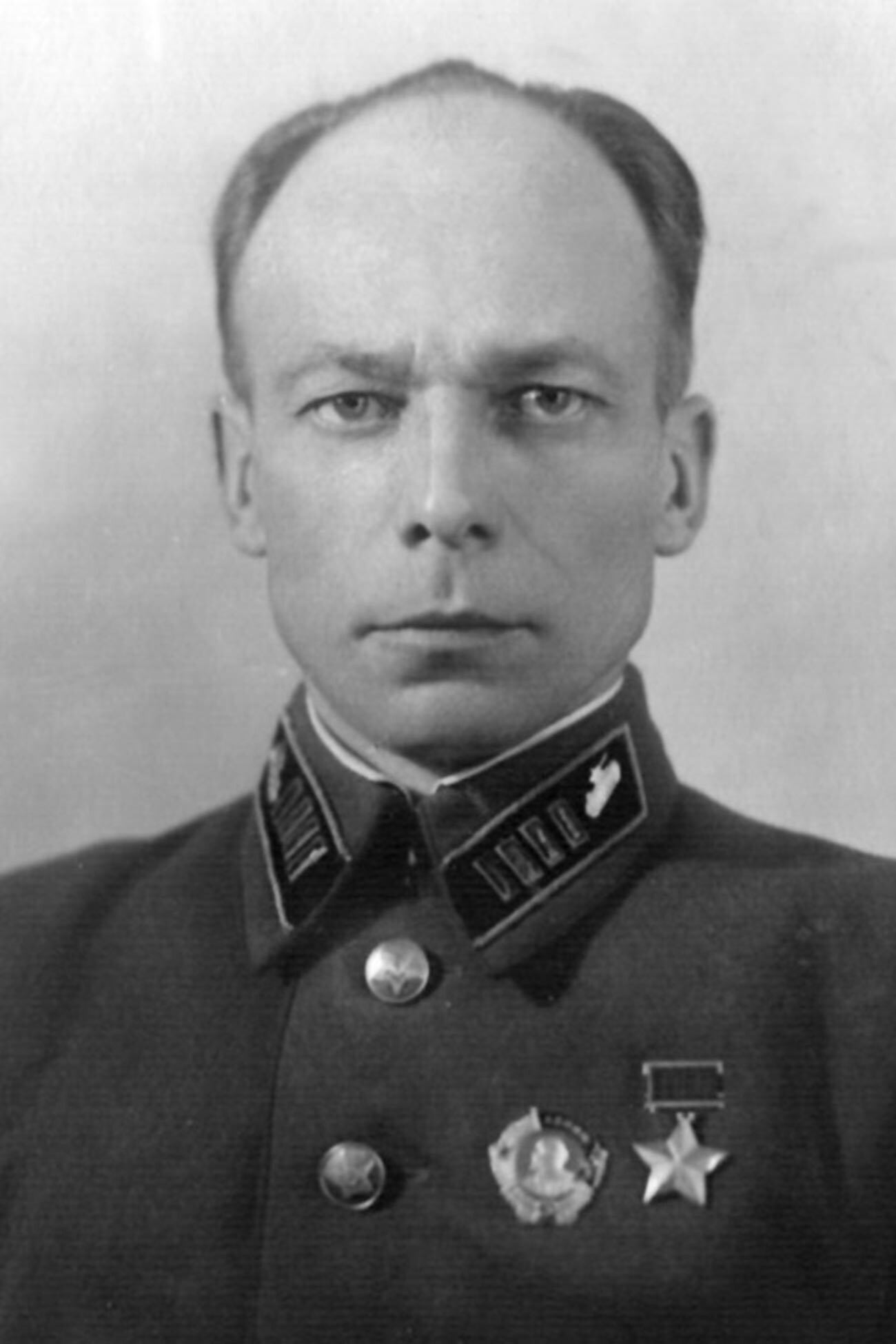 On October 29, 1936, a tank company commanded by Soviet captain Pol Arman [Pols Armāns] was engaged against Italian tanks on the outskirts of Seseña 30 km from Madrid. The commander’s tank, whose gun had jammed, was being fiercely pursued by a CV-33 ‘Ansaldo’ flamethrower tankette. Arman was saved from disaster by the T-26 of Lieutenant Semyon Osadchy, which ran into the hull of the enemy machine at top speed and knocked it into a ravine, where it rolled over several times and finally exploded.

Cases of tank rammings on the battlefields of World War II were recorded in the armed forces of several of the belligerent states, but the unequivocal record in this belonged to the Red Army. In all, Soviet tank crews rammed enemy tanks up to several hundred times. 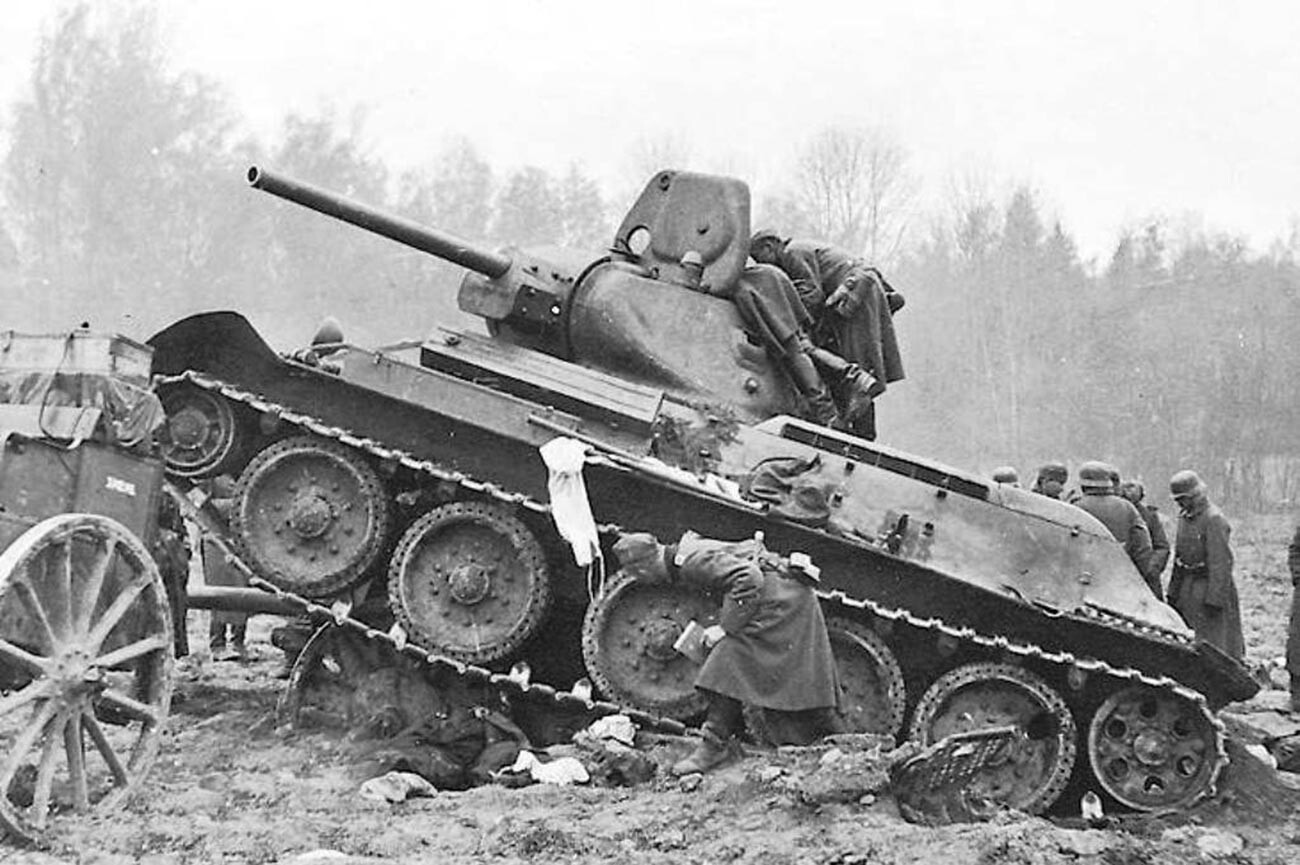 Ramming heavy enemy armored vehicles was regarded as a forced and desperate measure, to be resorted to in extreme circumstances - when no shells were left or the gun was disabled. Many Soviet tank crews were instructed in army colleges during the war on how to slam into an enemy machine in such a way as to put it out of action, without damage to themselves.

The first tank ramming incident during the war between Nazi Germany and the USSR was recorded on June 22, 1941. In fighting in Western Ukraine, a heavy KV-1 commanded by Lieutenant Pavel Gudz smashed into a Pz.Kpfw III medium tank, damaging its caterpillar track and knocking the enemy machine into a ditch.

During the Battle of Moscow in the winter of the same year, the crew of a BT-7 light tank joined battle with two German Pz.Kpfw IIIs near the village of Denisikha. The first tank was knocked out by fire, but there were no armor-piercing rounds left to deal with the second. The distance to the enemy machine was now as little as 200 meters and driver Pyotr Traynin decided to ram it. 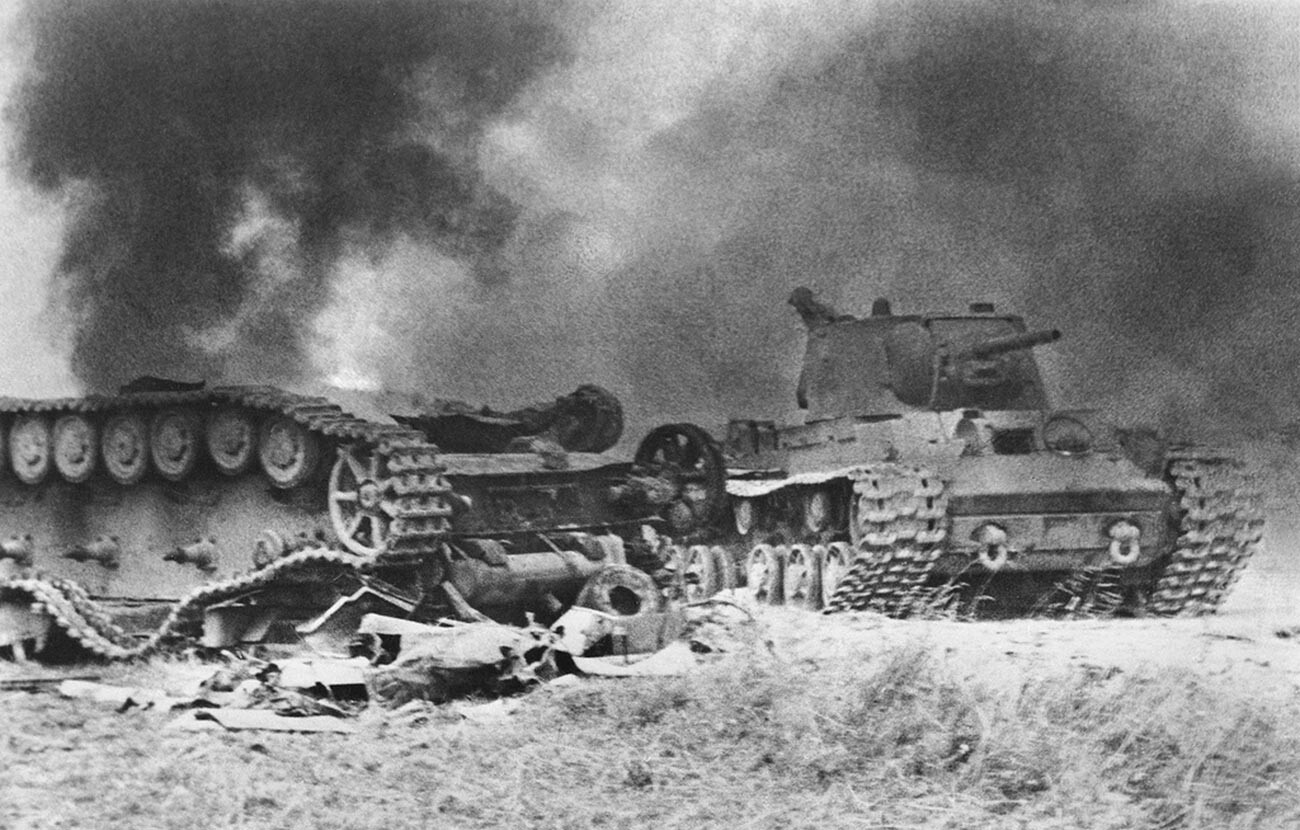 “I remembered literally everything that our driving instructor had taught us when we were learning the ramming technique,” the tank crewman wrote in his memoirs. “I acted strictly according to instructions: I went in and out of gear as required and pressed what I had to press… I rammed the enemy tank with the very middle of the front edge of the hull - the spot where the front armor plating is firmly welded to the hull floor. I hit him head-on at a sharp angle, precisely on his leading wheel. I left both the wheel and the track in pieces and when the shock of the impact had died down, I fully revved my engine and, engaging second gear, I dragged the enemy tank, skidding, for another eight to ten meters.”

The crew of the Pz.Kpfw III attempted to clamber out of their hatch, but the commander of the BT-7 forced them back inside with a burst of machine-gun fire. The German tank suddenly started sliding down somewhere and finally turned on its side. It transpired that Traynin had pushed it onto a steep riverbank covered by a snow drift.

The BT-7 had withdrawn into trees practically undamaged when another German Pz.Kpfw III appeared at the edge of the wood. At that point, the crew decided to repeat its audacious tactic. When the Germans approached their comrades’ knocked-out machine, the Soviet tank came hurtling towards them from the thicket of trees. 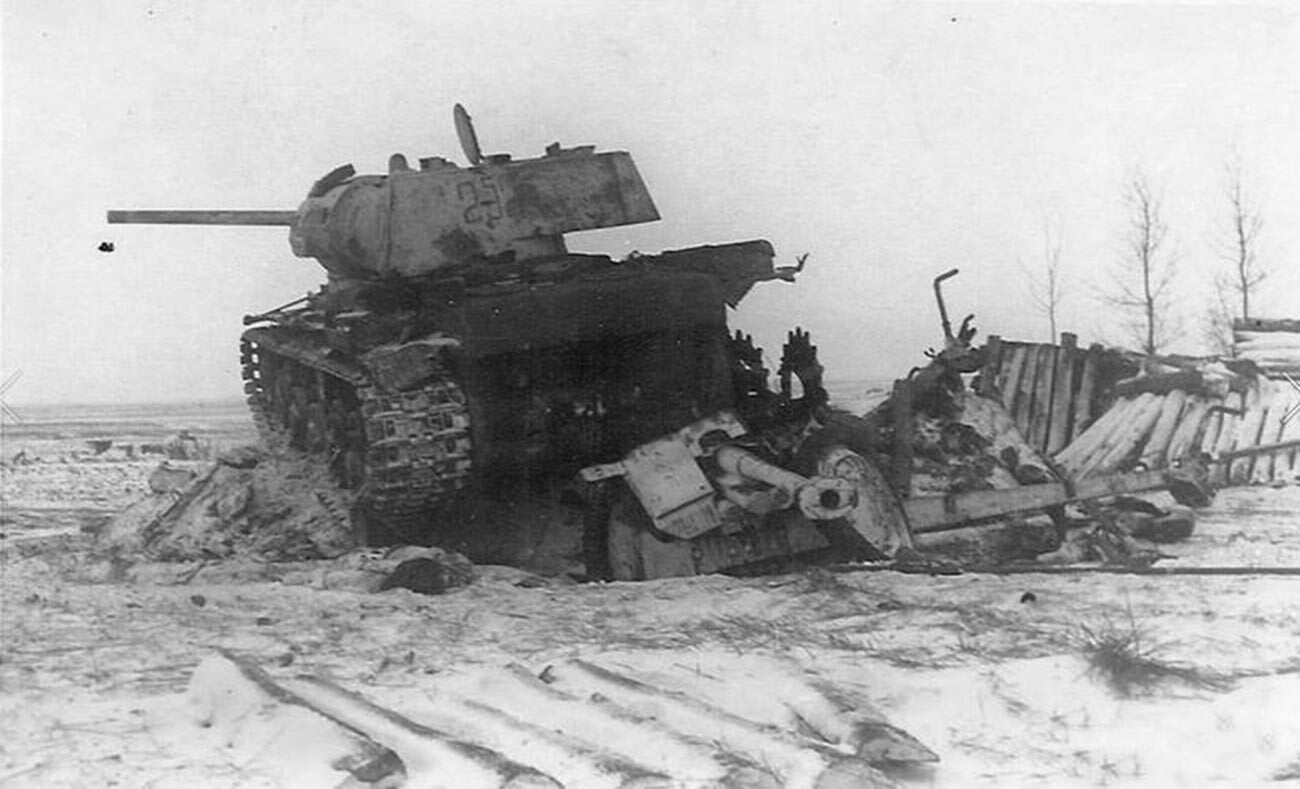 “This time, I knocked out the enemy tank’s leading wheel so expertly that I didn’t even feel the impact. But after the collision, my engine cut out and only restarted at the third or fourth attempt. And it was a good thing it restarted! Having recovered from the impact, the German crew of the crippled tank were already hastily rotating their turret,” Traynin recalled. Weaving from side to side, the BT-7 successfully managed to escape the enemy fire.

This double ramming of enemy tanks was not the highest achievement of Soviet tank crews. Some managed to perform the tactic three or even four times. For many, on the other hand,  even a single ramming of an enemy armored vehicle was their last.

The Battle of Kursk in the summer of 1943 marked the heyday of tank rammings. Around 50 such cases were recorded in the course of the battle. “Here and there the shooting match became a ramming contest, with tanks coming into close contact, their armor colliding and tanks mounting one another…” recalled General Yevgeny Ivanovsky. 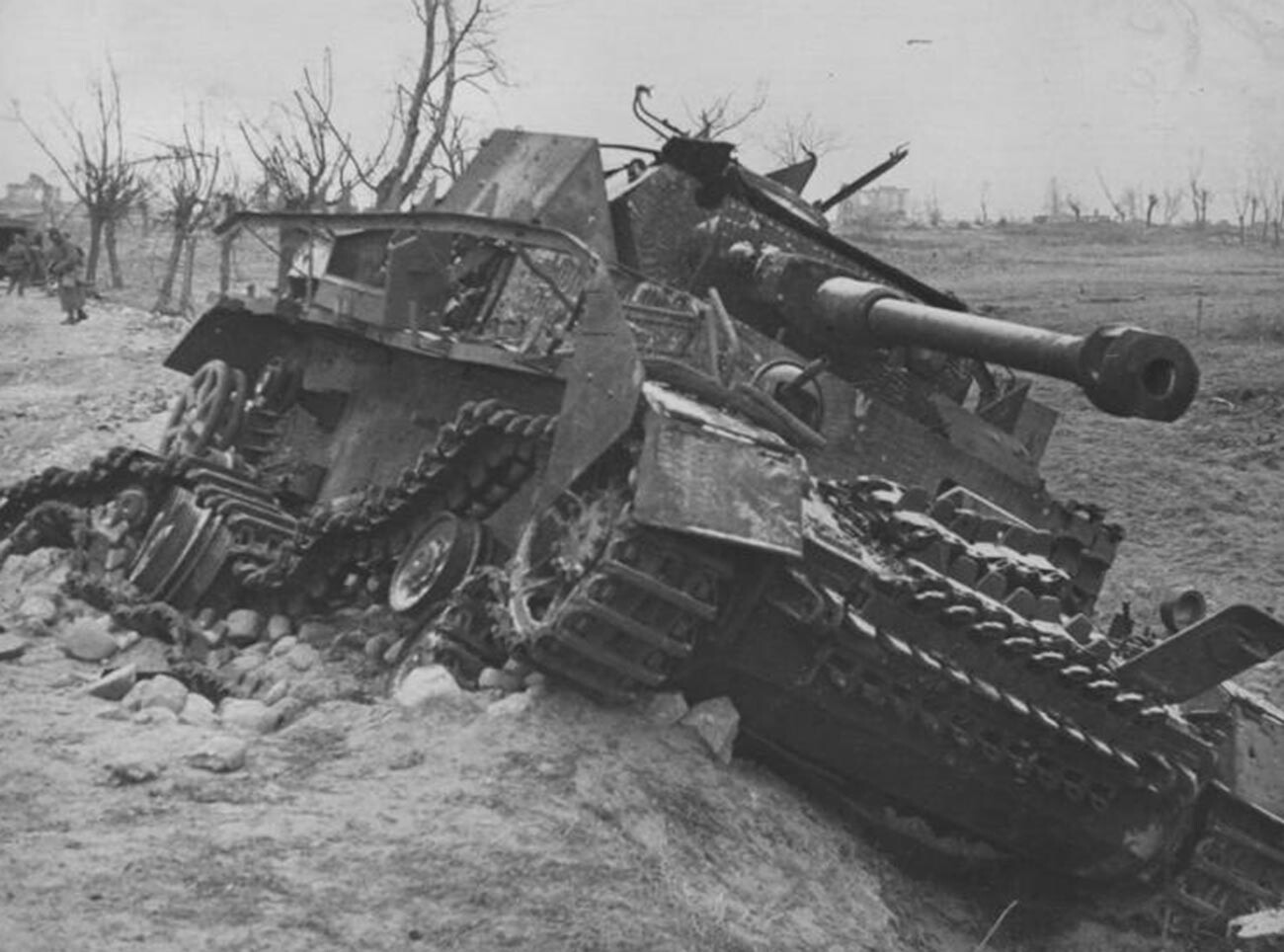 This involved T-34 30-ton medium tanks attempting to ram German heavy Pz.Kpfw VI ‘Tigers’, which were 57-ton brutes. The first such episode occurred on July 12 at Prokhorovka station, when the burning tank of Lieutenant Ivan Gusev plowed into a ‘Tiger’ at full throttle. The enemy tank found itself engulfed in flames and stopped, but this had cost the lives of the Soviet tank crew.

A crew commanded by Senior Lieutenant Afanasy Fyodorov was much luckier. When on the morning of July 28 it was among the first to force its way into the population center of Rybnitsa, driver Ivan Dupliy spotted a Tiger in the nick of time. It was waiting in ambush, the barrel of its gun beginning slowly to turn in the direction of the “Thirty-Four”.

“Commander, there’s a ‘Tiger’ behind the corner of the brick building! Shall we ram it?” exclaimed Dupliy. “Let’s go!” ordered Senior Lieutenant Fyodorov after reflecting for an instant. 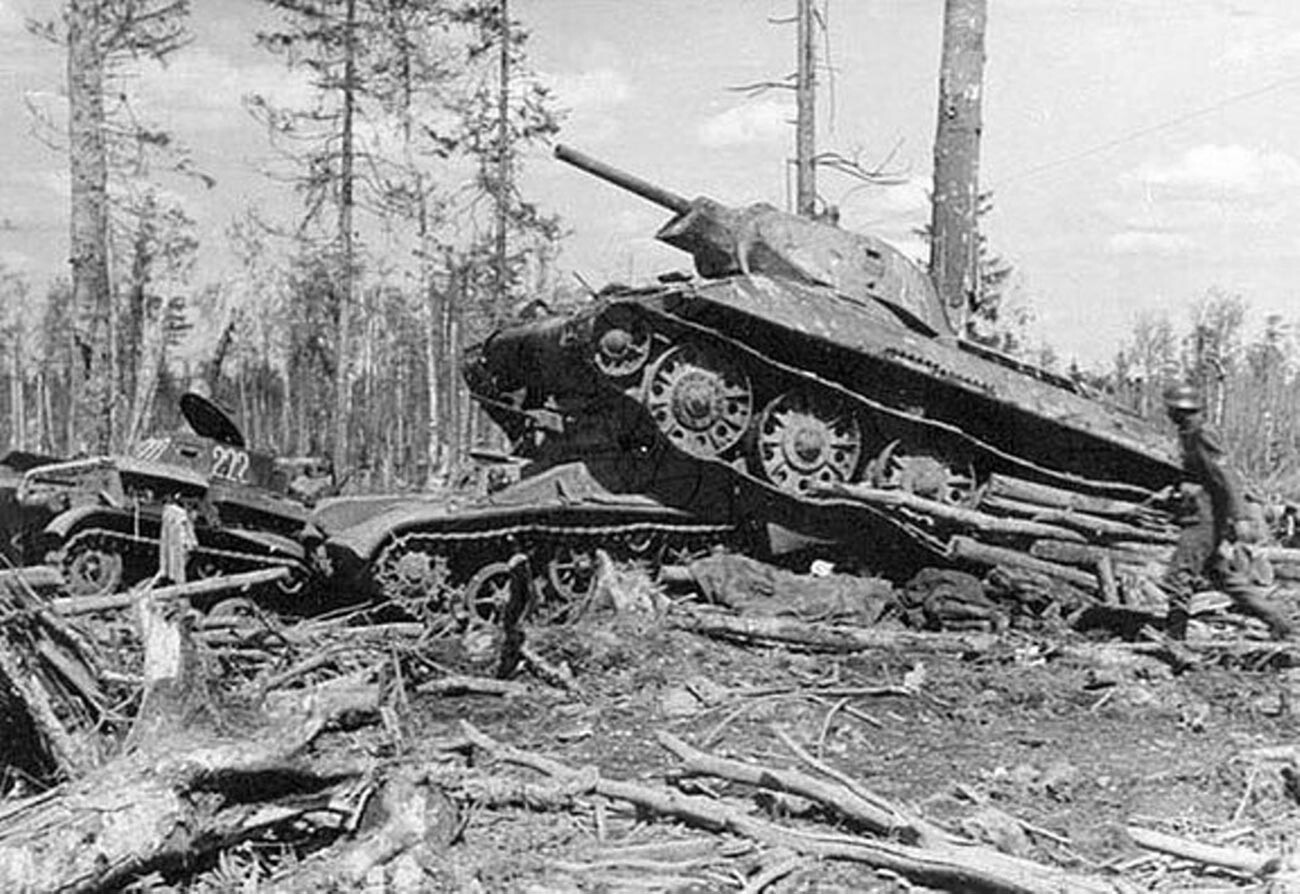 The driver accelerated as much as he could and maneuvered his way towards the Tiger, whose crew could not catch the nimble Soviet tank in its sights. The T-34 shunted into the side of the Pz.Kpfw VI at speed, ripping off its caterpillar track. The Germans tried to get out of their damaged machine, but were immediately mown down by a burst of machine-gun fire. Senior Lieutenant Fyodorov’s tank was quite undamaged in the engagement and remained fully battleworthy.

Many Soviet tank crews were trained in how to ram enemy tanks, but it did not enter anyone’s head to instruct them in how to ram an enemy armored train. Nevertheless, several episodes were recorded of Red Army tanks charging these “fortresses on rails” at top speed during the war. 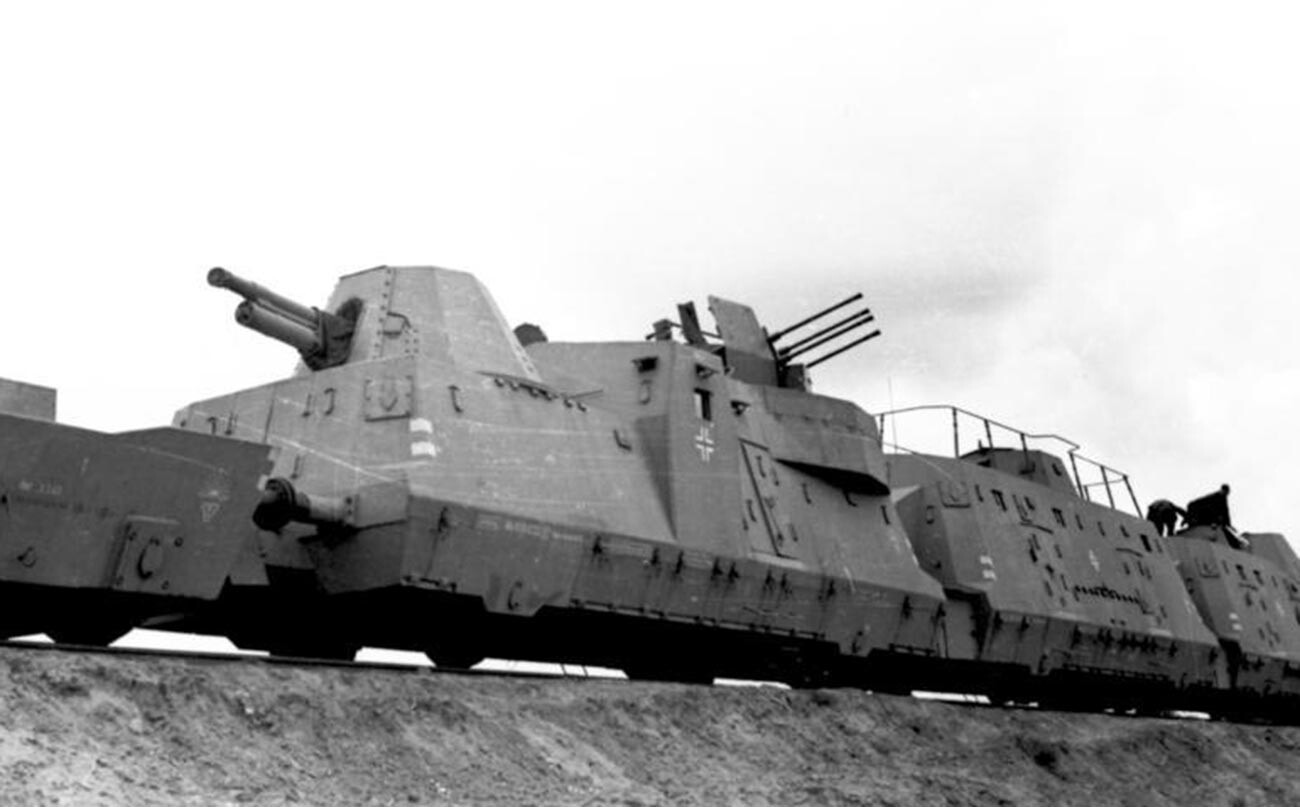 The most celebrated case occurred on June 25, 1944, in southeastern Byelorussia. The 2nd tank battalion of the 15th guards tank brigade was battling for the Chernyye Brody railway station not far from Bobruisk and an advance by Soviet troops was effectively being held off by a German armored train.

In the very heat of battle, a T-34, engulfed in flames and with a damaged main gun, decided to ram the German leviathan. At that point, Lieutenant Dmitry Komarov and his driver, Mikhail Bukhtuyev, were the only crew members still capable of fighting.

The tank, scattering enemy infantry as it went, mounted the raised track bed at top speed and plowed into the German armored train. As a result, three flat wagons, along with the machine guns and artillery pieces mounted on top of them, were derailed. The Soviet troops took advantage of the enemy’s confusion and broke through to the station. 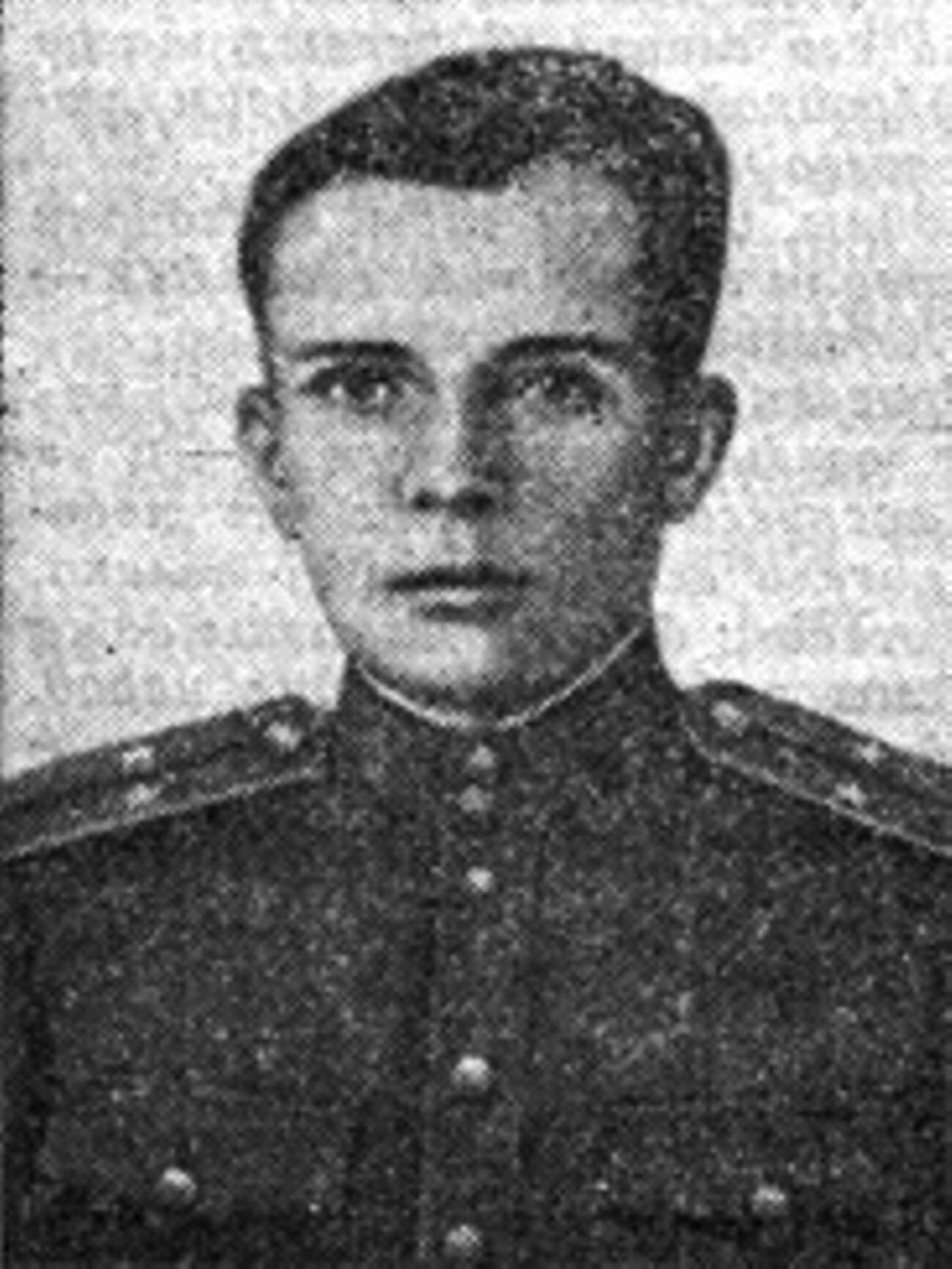 Driver Mikahil Bukhtuyev was killed on the spot by the impact, but Komarov astonishingly survived. Bloodied, he clambered out of the T-34 and, returning fire with his pistol, managed to get to the nearest woods, where he collapsed unconscious. The lieutenant was lucky - he was shortly found by a Soviet reconnaissance party.