Moscow in the times of Leo Tolstoy (PHOTO) 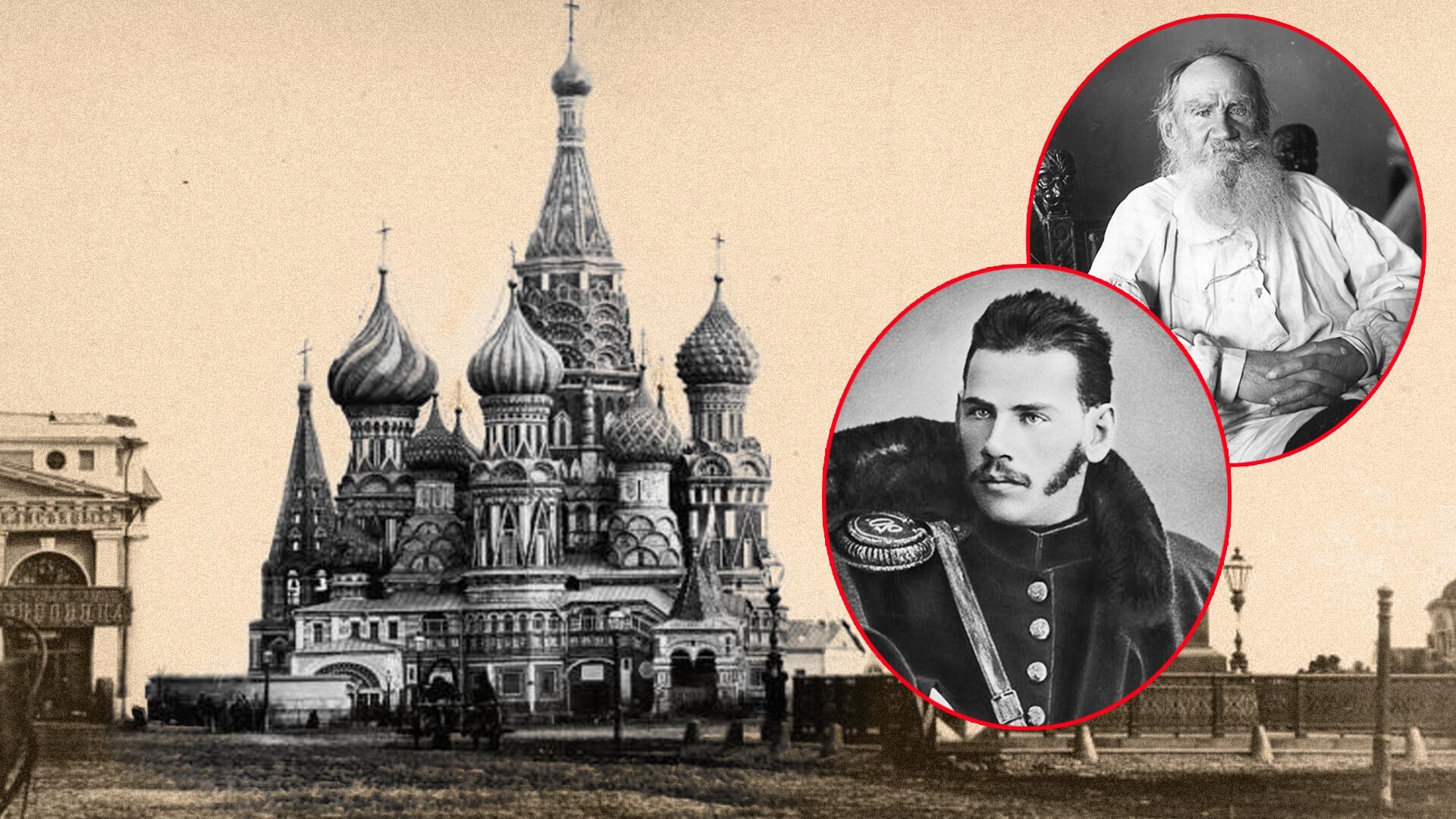 Yuly Melbius/L.N. Tolstoy state museum/russiainphoto.ru
Although the writer did not live permanently in Moscow, he owned a house there and the city plays a central role in his epic War and Peace. 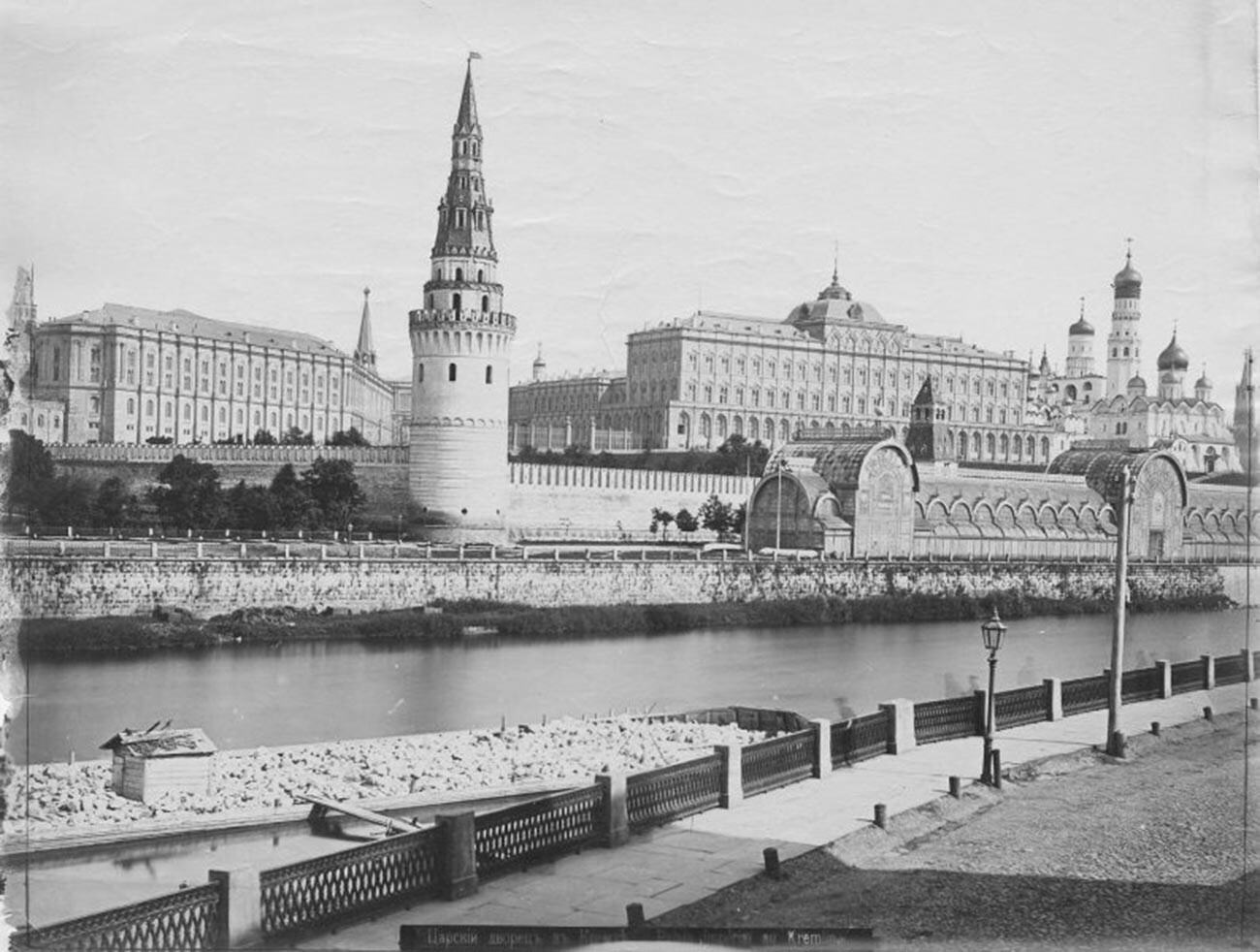 Leo Tolstoy was born and lived most of his life at his family estate at Yasnaya Polyana near Tula, south of Moscow. However, as both a young and old man, he very often visited Moscow and spent long periods there. Let's take a look at the city through the eyes of the great Russian writer. 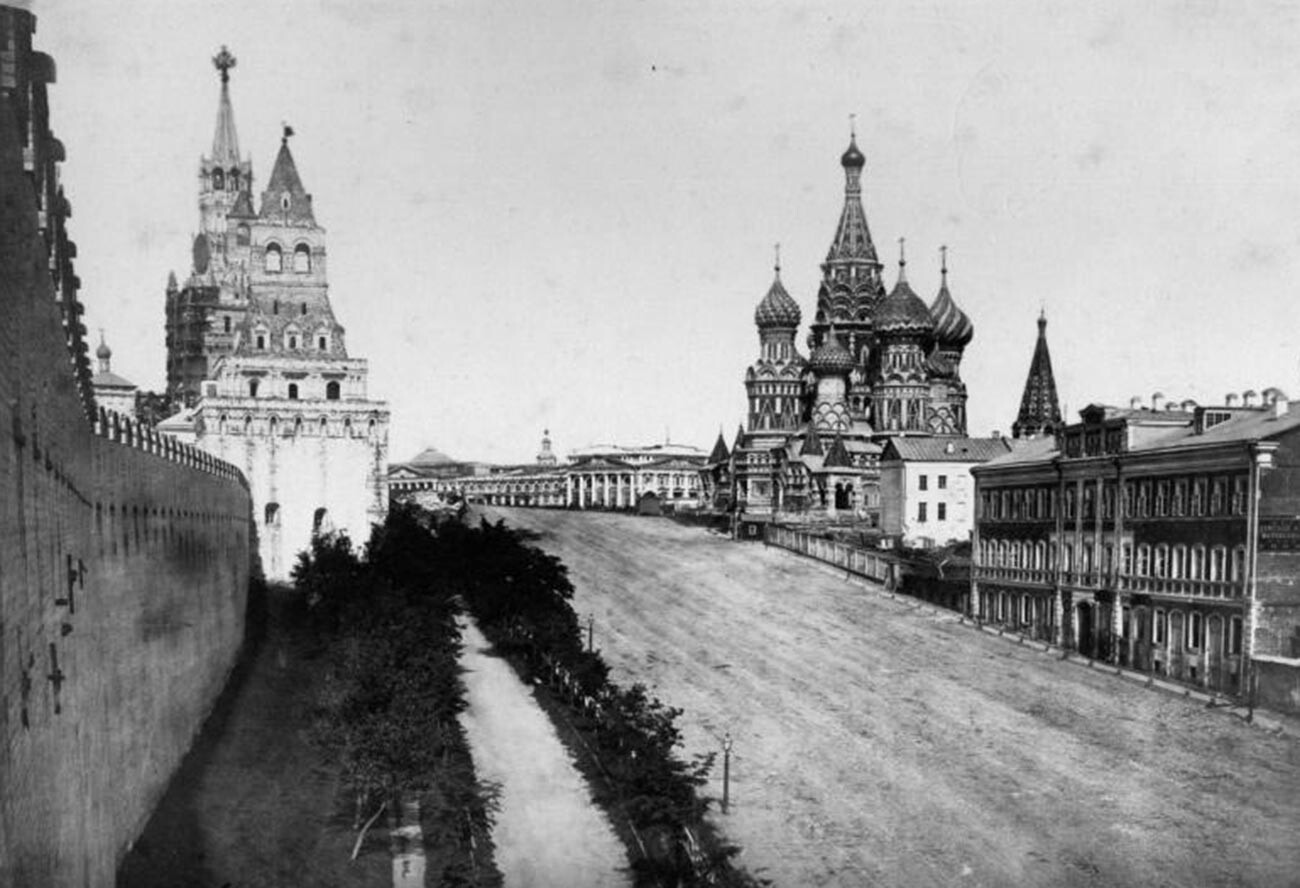 Tolstoy’s first address in Moscow – on Plyushchikha street – was not far from Novodevichy Convent, which he dearly loved and walked around as a child. Today a monument stands to the writer in the nearby Devichoe Pole (Maiden’s Field) square. 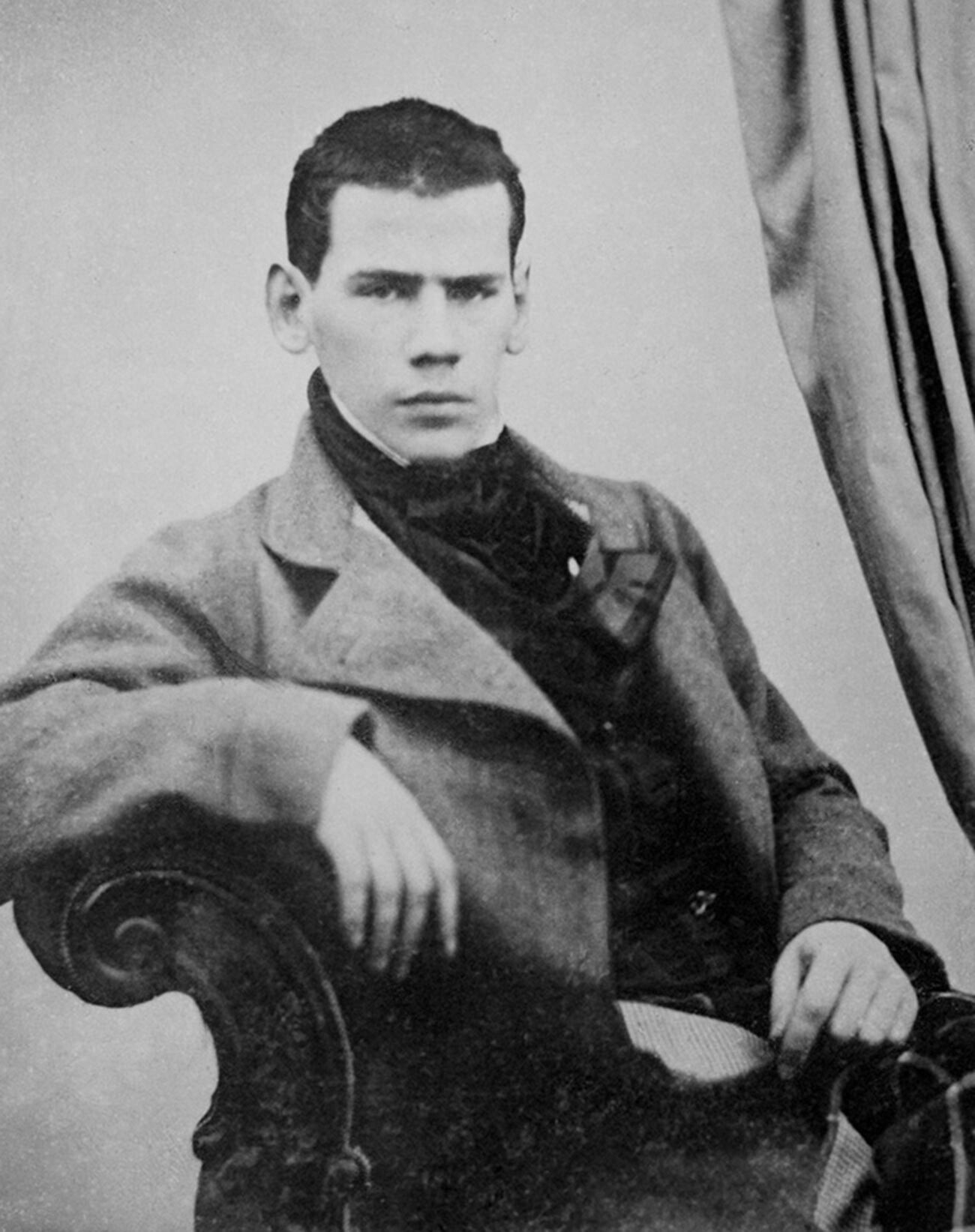 Tolstoy was a frequent guest at the manor house on Povarskaya Street, which once belonged to his relatives, the Bode-Kolychev family. It is believed that this building was the house of the Rostovs in War and Peace. 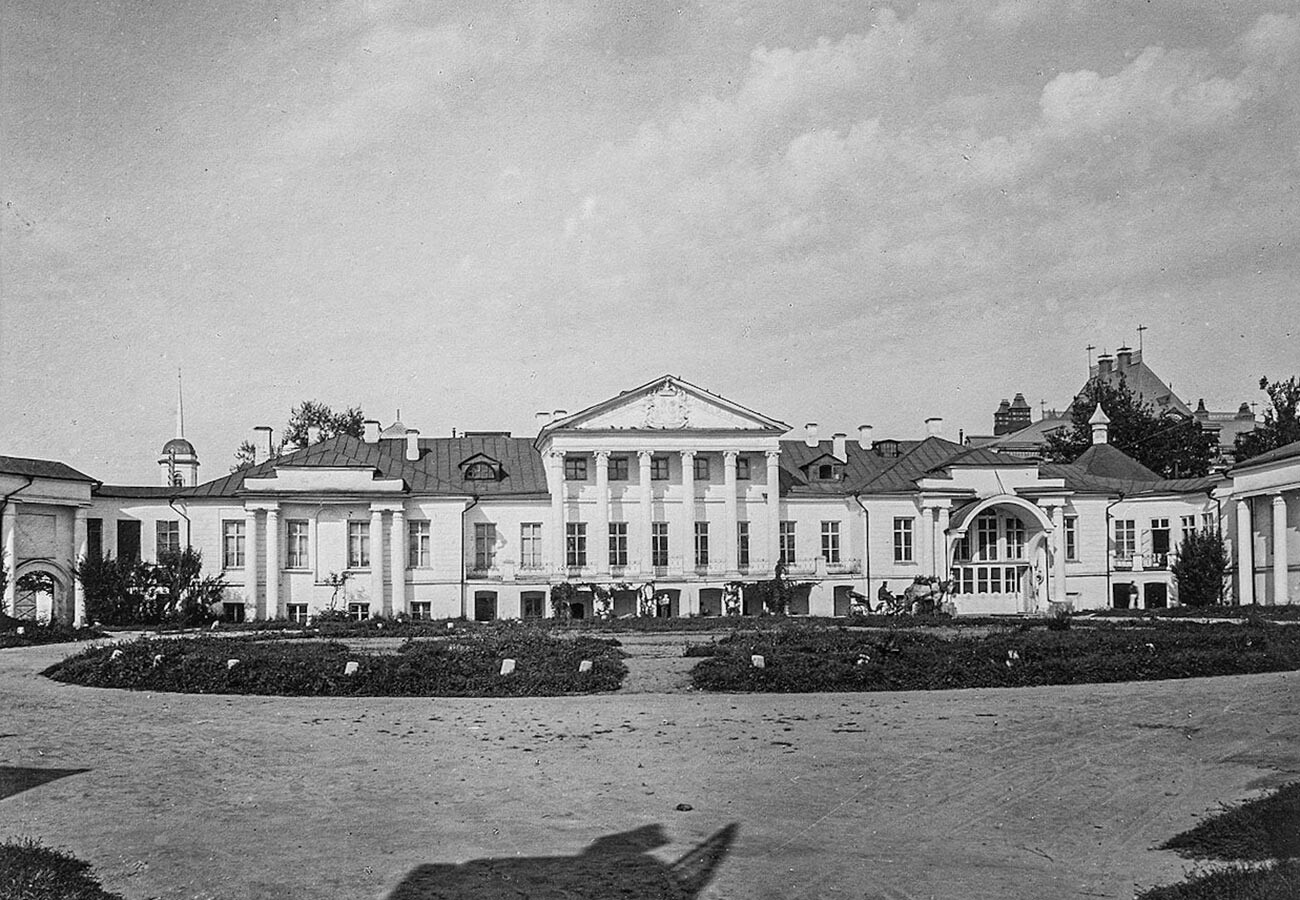 This house, at 9 Vozdvizhenka Street, survived the war of 1812 and the great Moscow fire. It is another place frequented by Tolstoy, who used it as a model for old Prince Bolkonsky’s house in War and Peace. 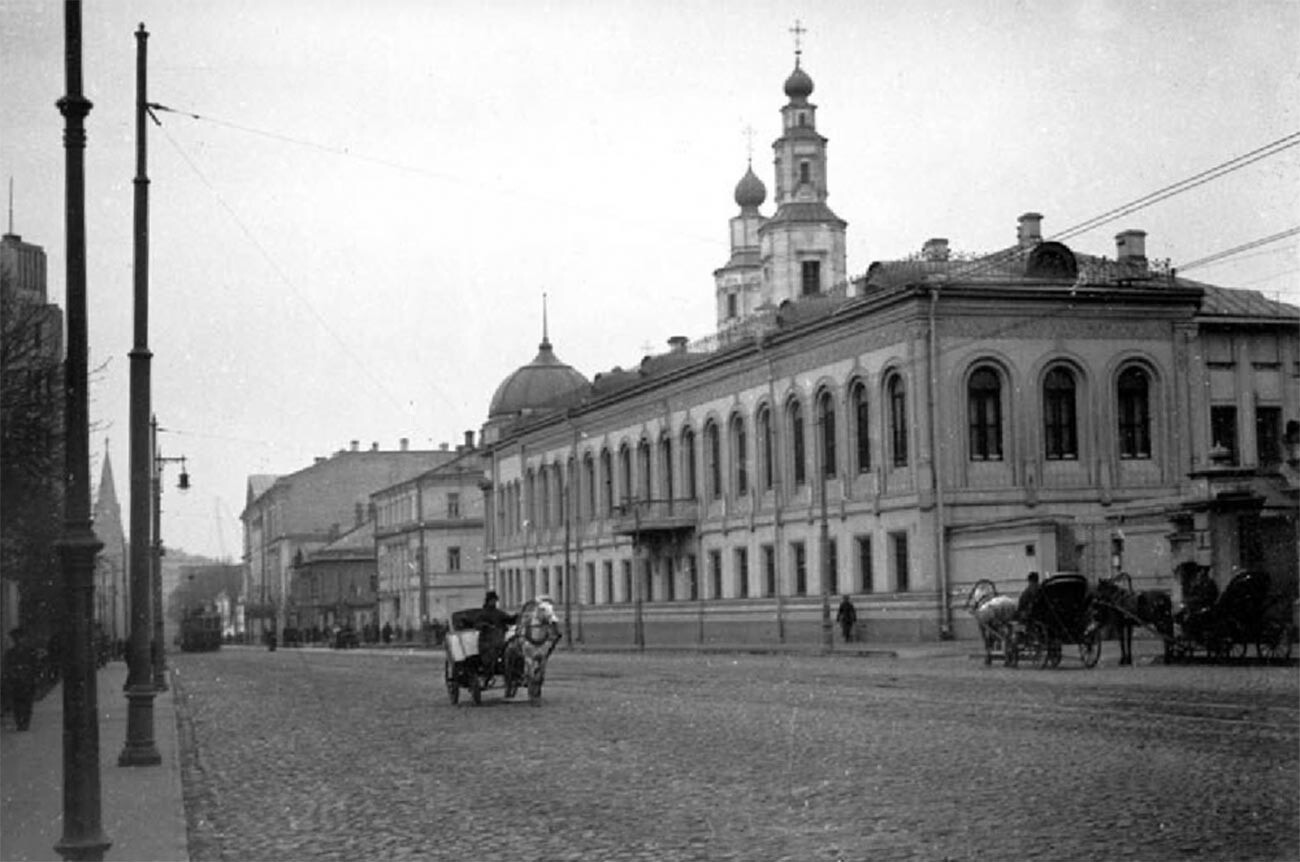 In 1836, the huge Tsar Bell, which had been damaged in a fire back in the 18th century, was moved to the Kremlin as a monument, which crowds of onlookers went to see. Arriving in Moscow for the first time in 1837, the little Tolstoy was likely one of them. 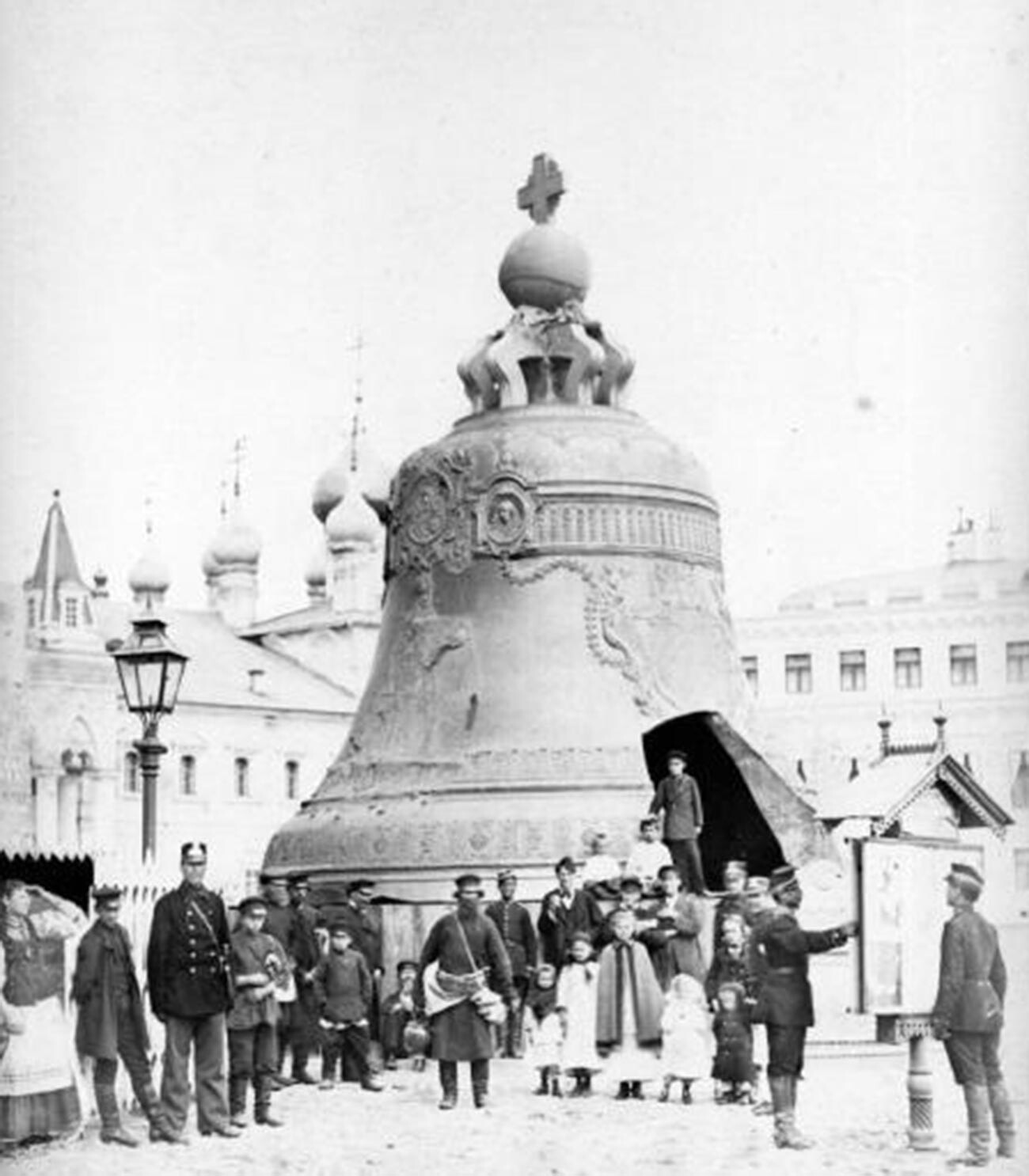 1839 saw the ceremonial laying of the foundation stone of the future Cathedral of Christ the Savior in memory of the war of 1812. The 11-year-old Tolstoy who witnessed this event could not have known that his novel about this war would bring him eternal global fame. (Photo from the 1880s) 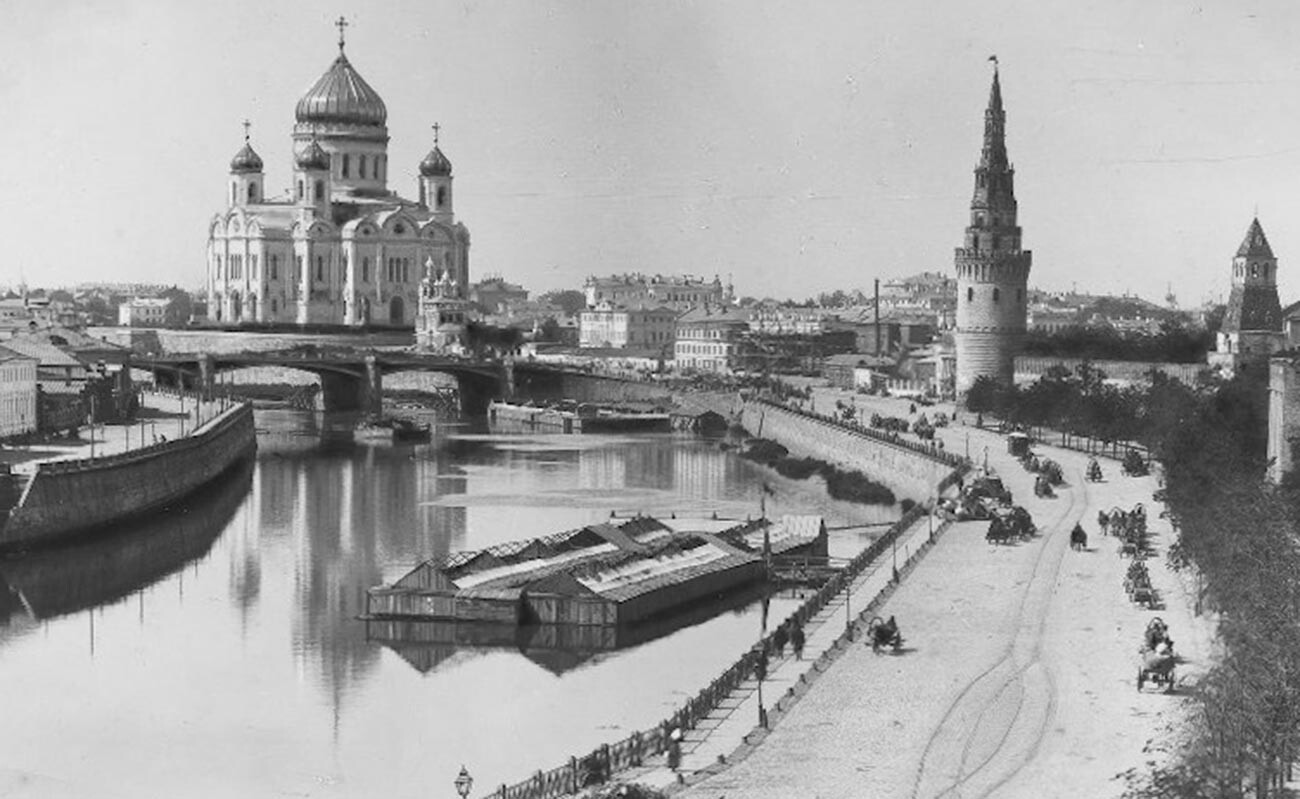 The cathedral was demolished in Soviet times and then rebuilt, and the surrounding area was re-landscaped. The building of the Bolshoi Theater, meanwhile, built in 1856, has changed little since Tolstoy’s time. 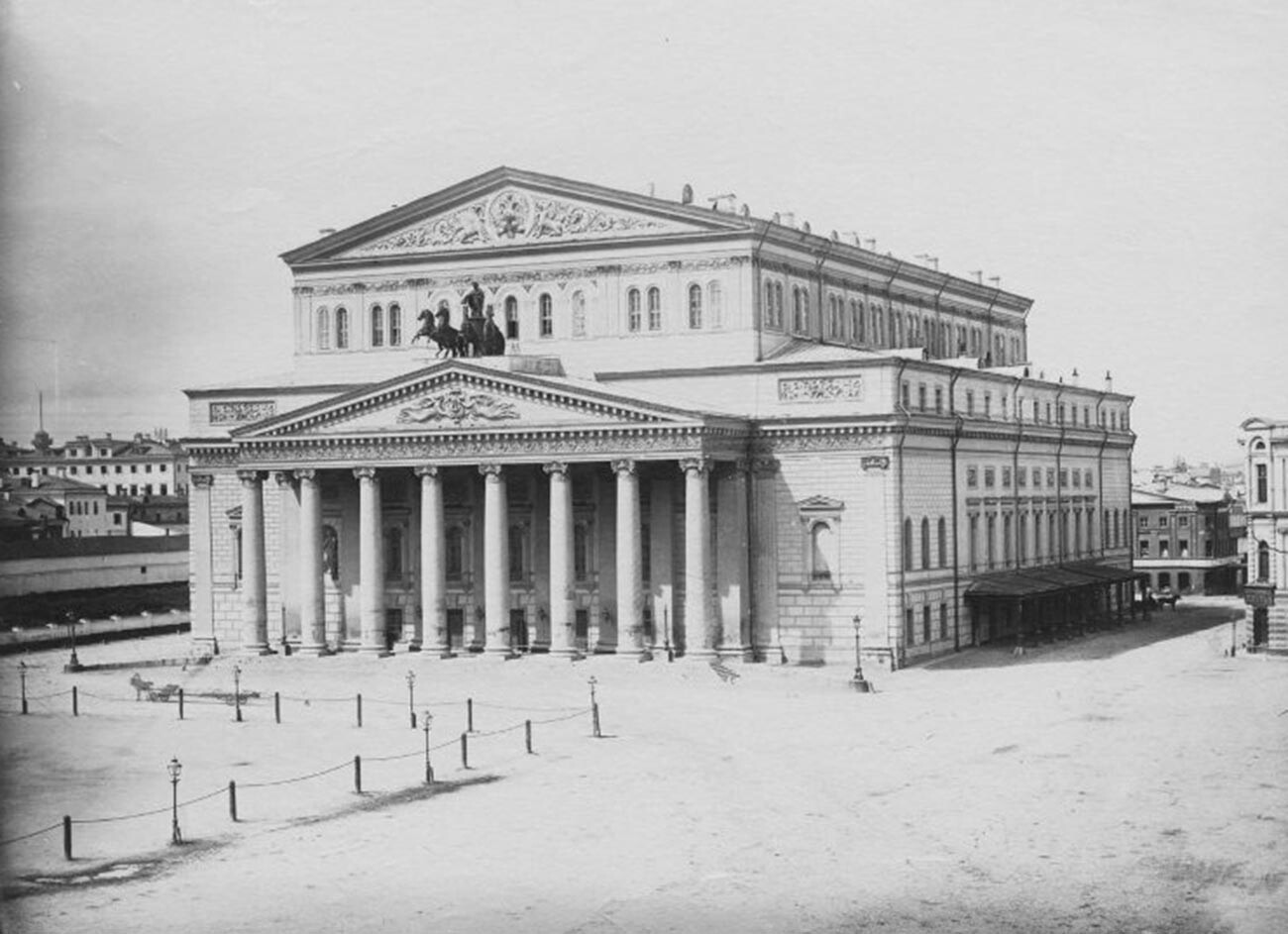 This is Tolstoy’s Moscow estate in Khamovniki District, which he bought in 1882 and spent every winter there until 1901. He had no desire to move to Moscow permanently, but it was more convenient to work with publishing houses there, plus his children studied at the university. 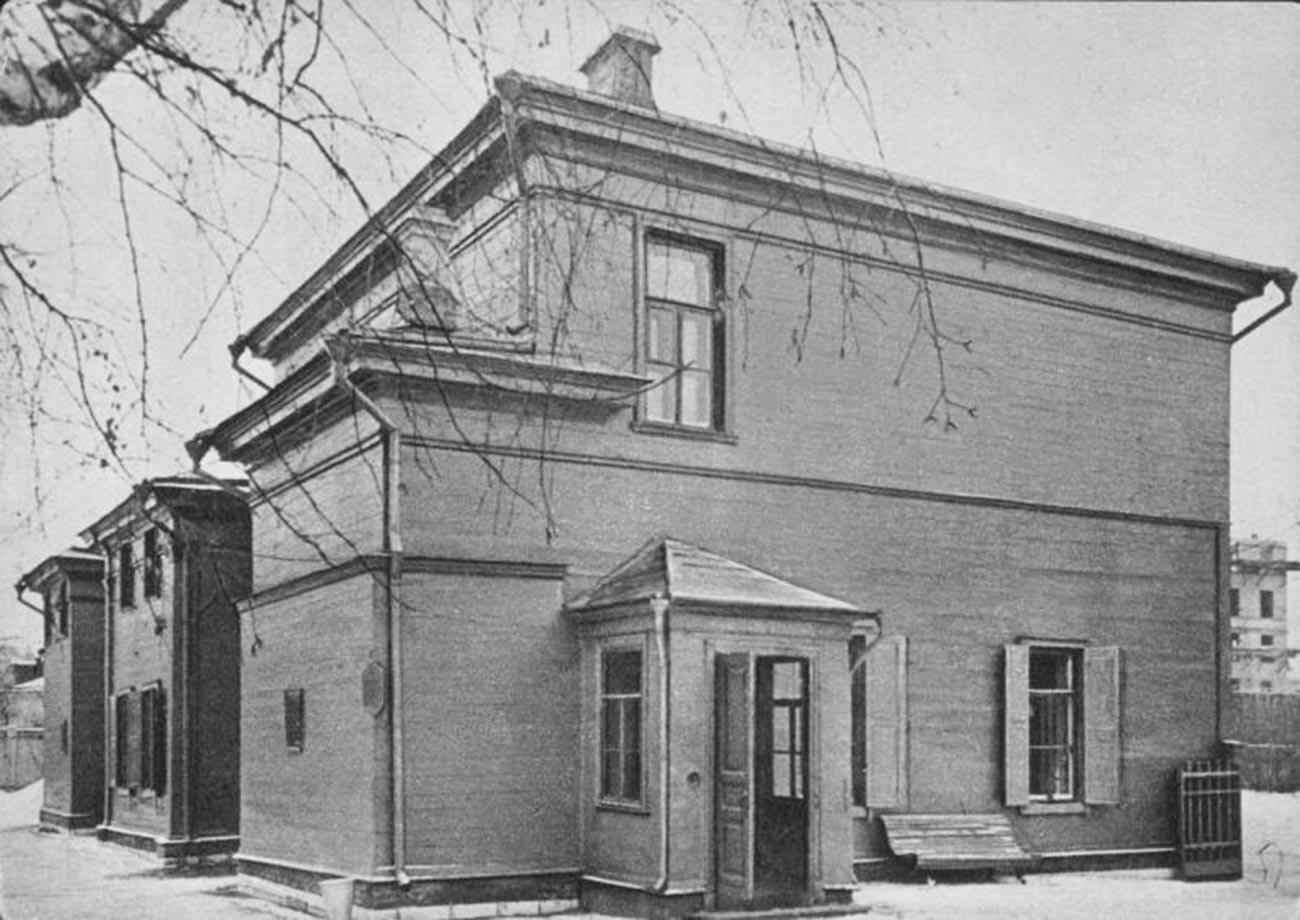 Leo Tolstoy and his wife Sofya with their children 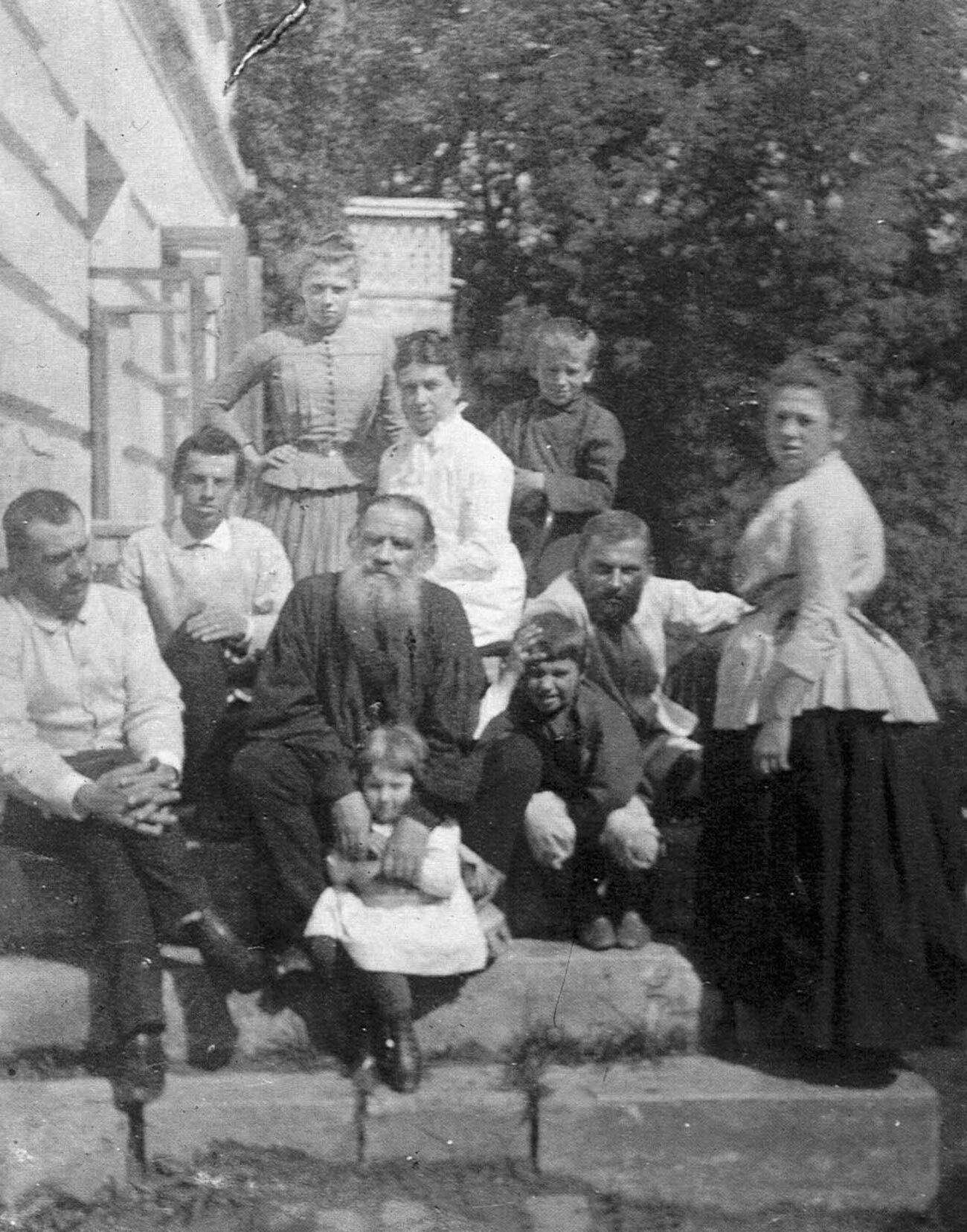 The great writer created around a hundred works at his Moscow residence, including his later masterpieces: the novel Resurrection, the novellas The Kreutzer Sonata, The Death of Ivan Ilyich, Kholstomer and Hadji Murat, and the treatise What I Believe. The photo shows the writer in his home study in Khamovniki. 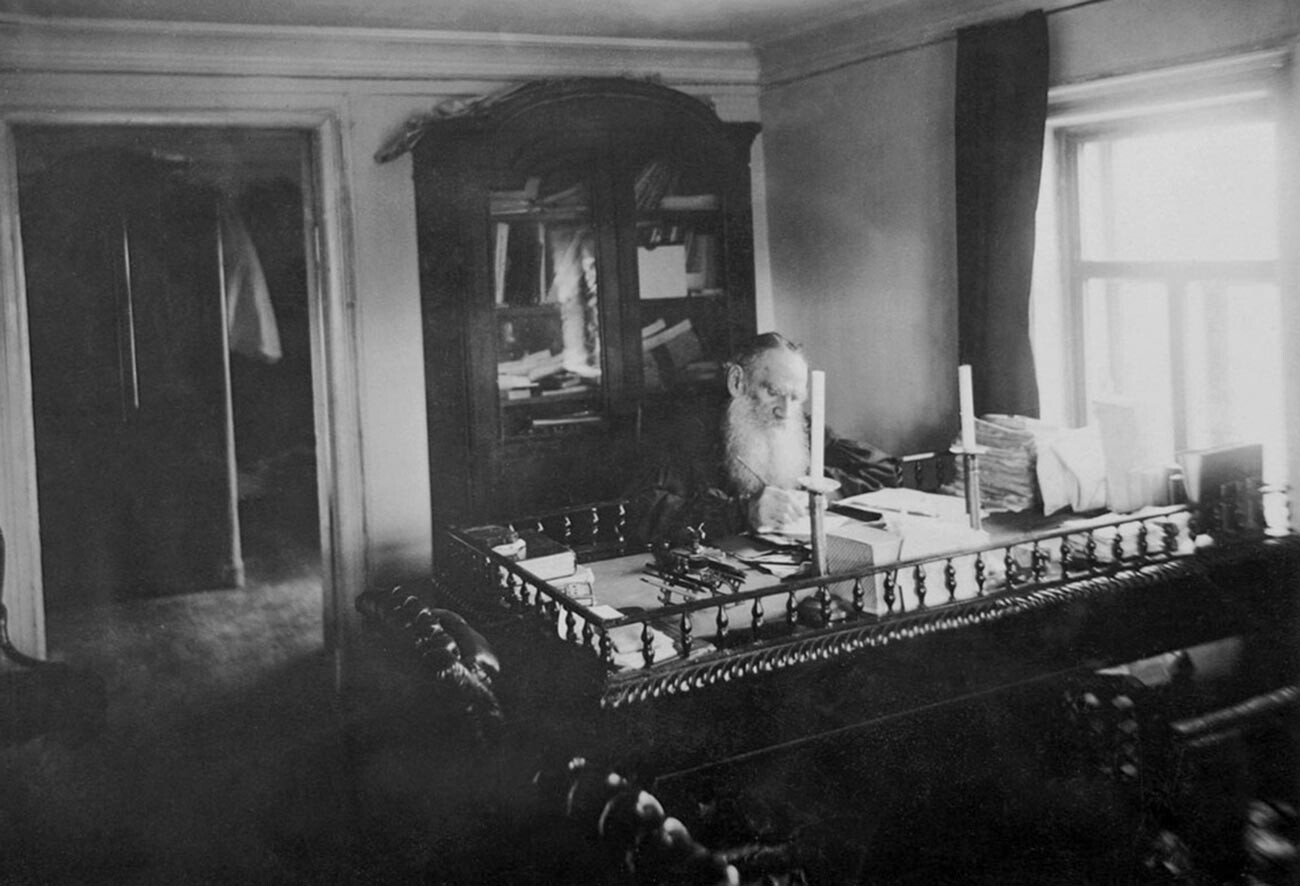 Tolstoy did not live in this house permanently, but spent every winter here from 1882 to 1901. Today it is a house museum. 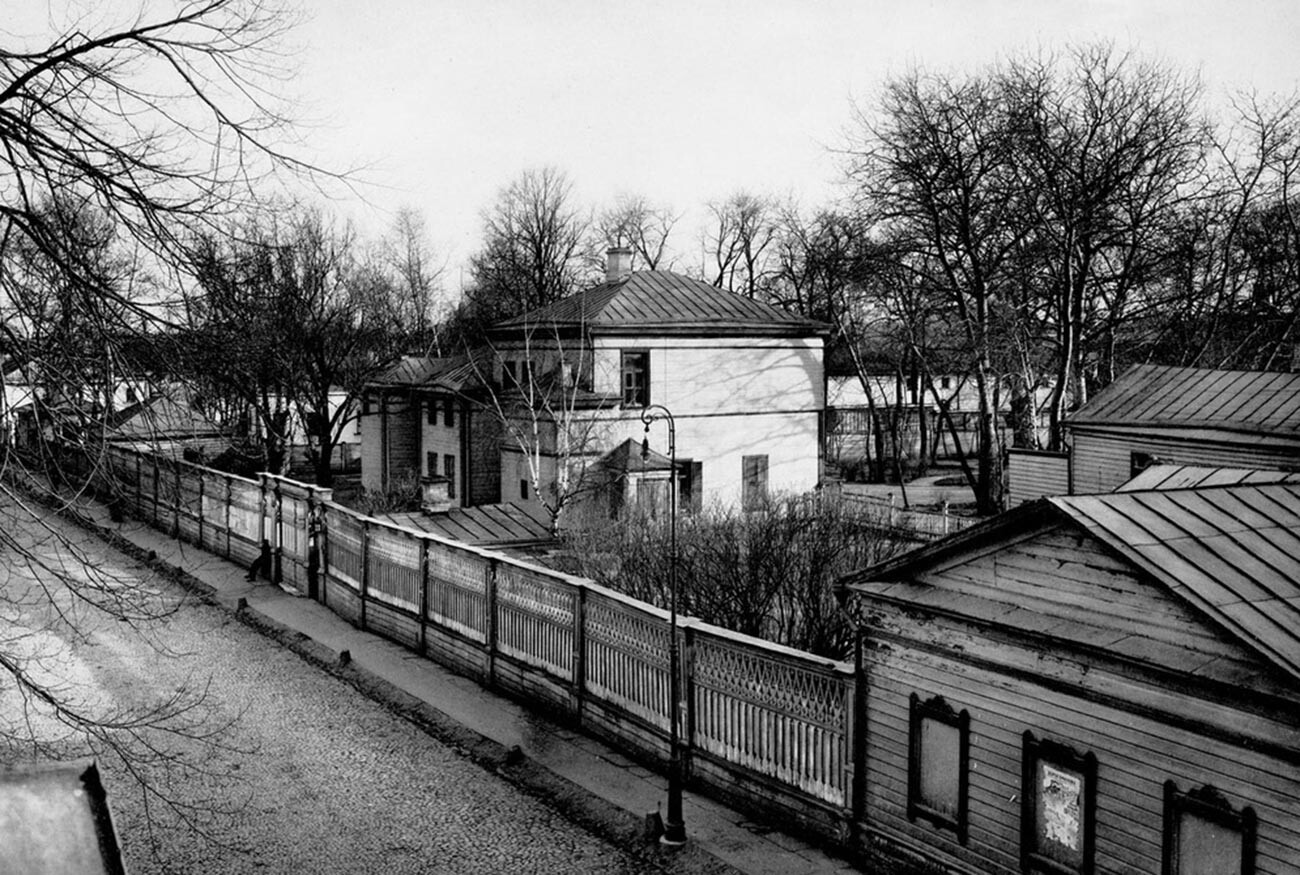 The great hall inside Tolstoy’s house in Khamovniki hosted receptions for many guests. Music was another passion of the Tolstoys, and among those who performed here were the great opera singer Fyodor Chaliapin, composer and pianist Sergei Rachmaninov and composer Nikolai Rimsky-Korsakov. 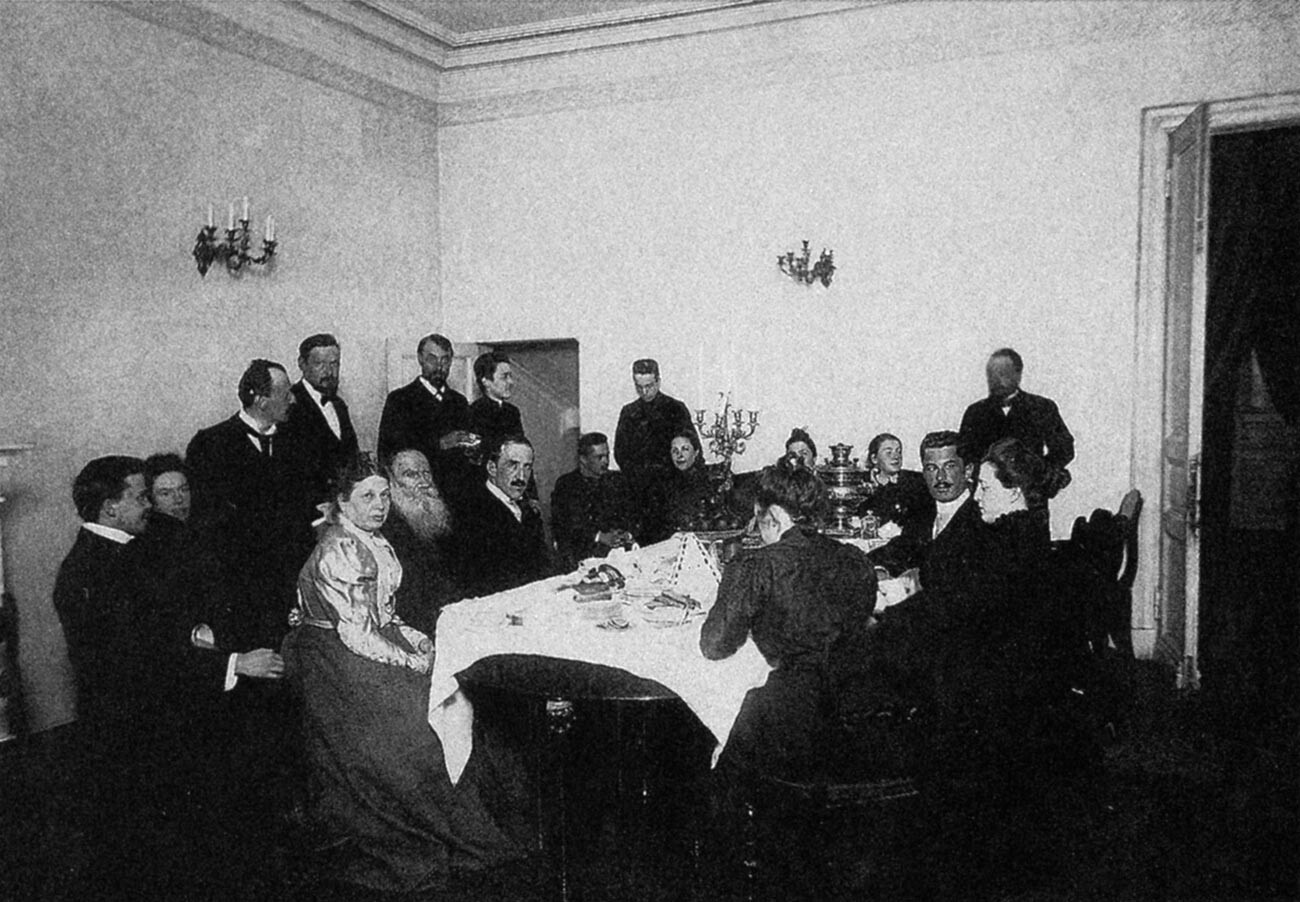 In 1883, Tolstoy witnessed the construction and opening of another emblematic building in Moscow: the State Historical Museum in this Russian-style palace. The red-brick building blends so harmoniously into the Kremlin/Red Square architectural ensemble that the uninformed observer would not even guess that it was built centuries later. 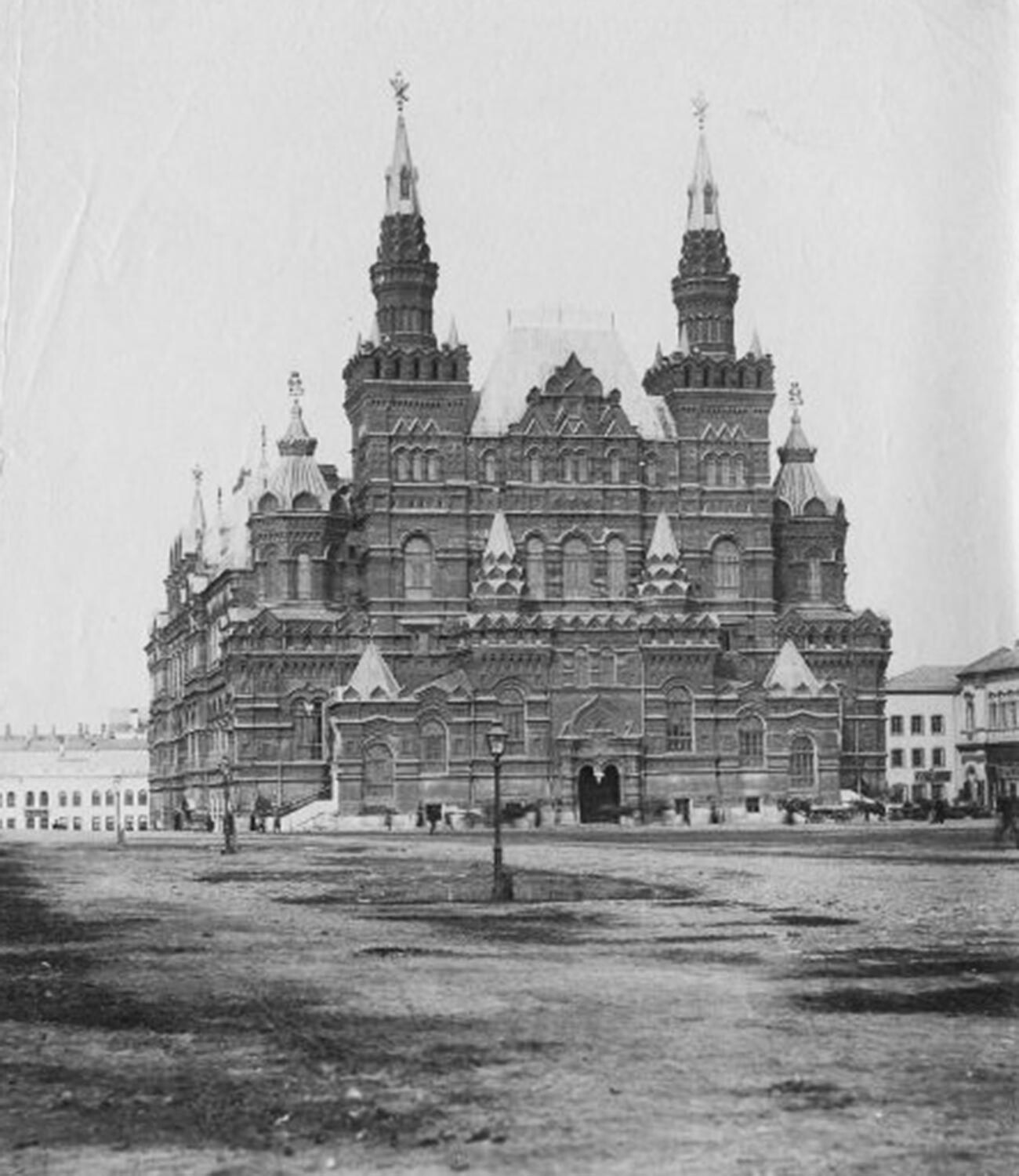 In 1893, the bustling open market on Red Square was replaced by the architectural miracle that is the Upper Trading Rows, built in the pseudo-Russian style. Today called GUM, it is one of the most famous stores in the city and the world. 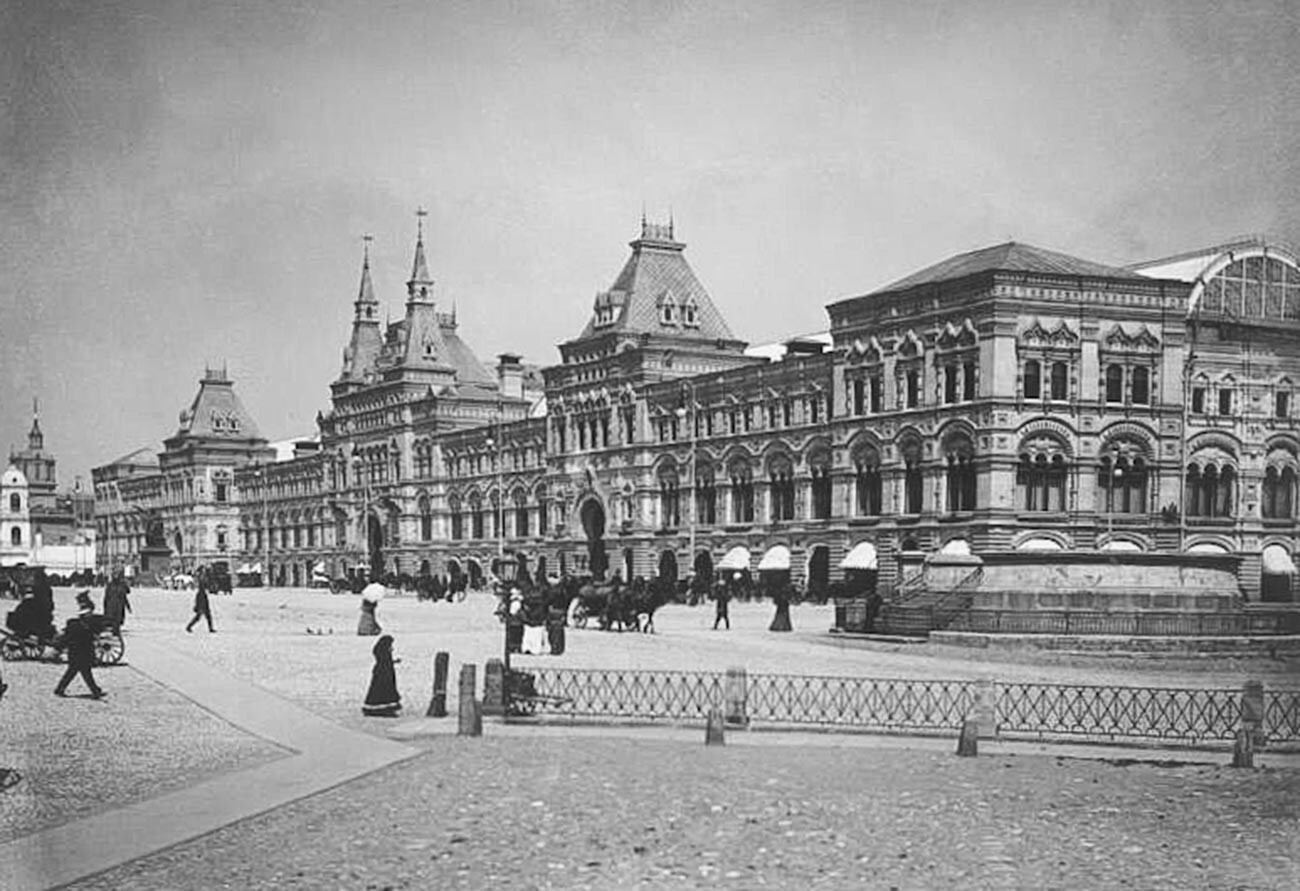 Both at Yasnaya Polyana and in Moscow, Tolstoy was a focal point for worshipping pilgrims. In Moscow, his admiring guests included the artist Ilya Repin, who painted more than one portrait of the writer, as well as the sculptor Paolo Trubetskoy, who can be seen sculpting a bust of Tolstoy in the photo below. 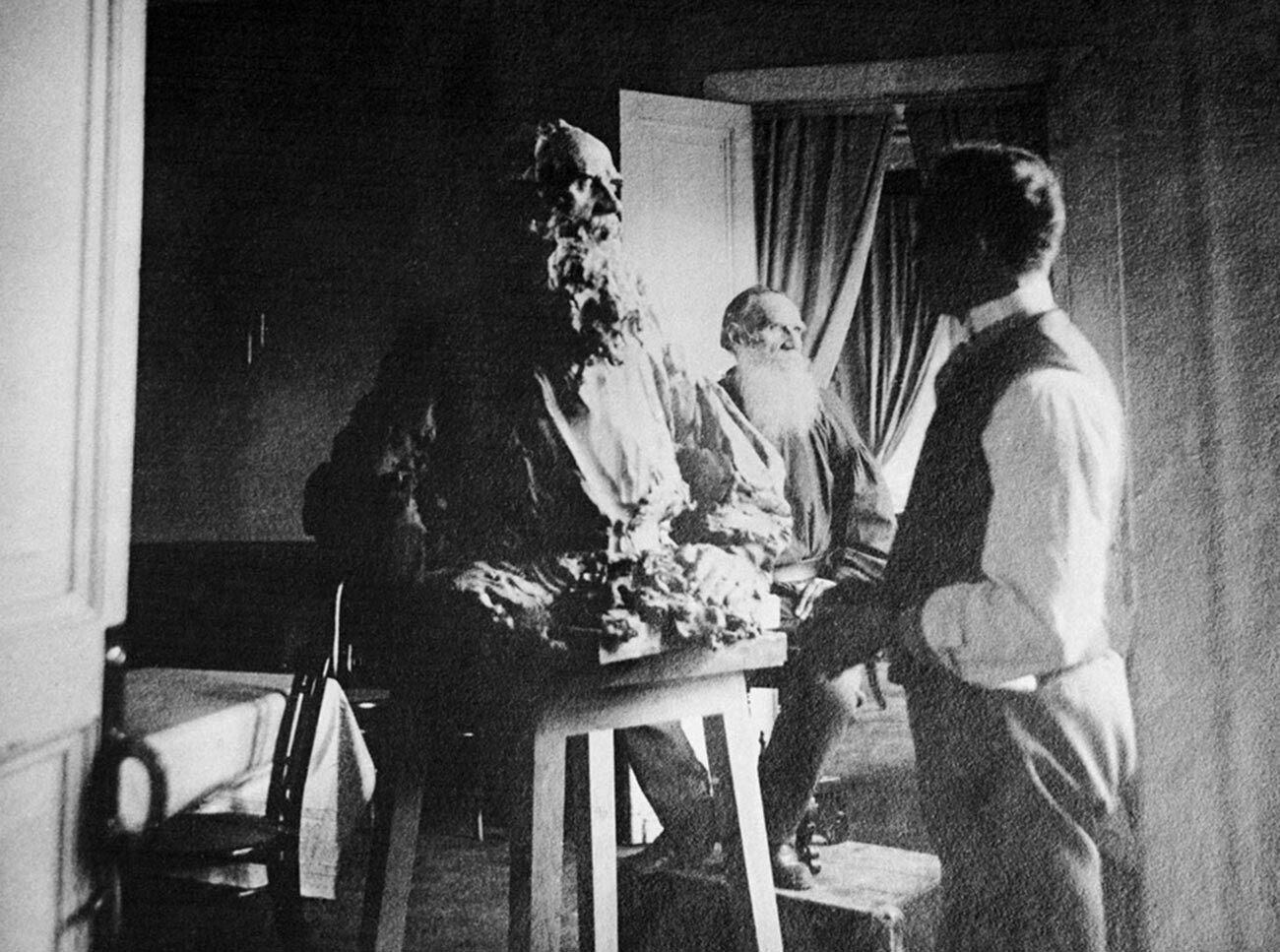 A living legend, Tolstoy was often spotted strolling around the city. In this photo, for example, he is out for a walk with his secretary Vladimir Chertkov. 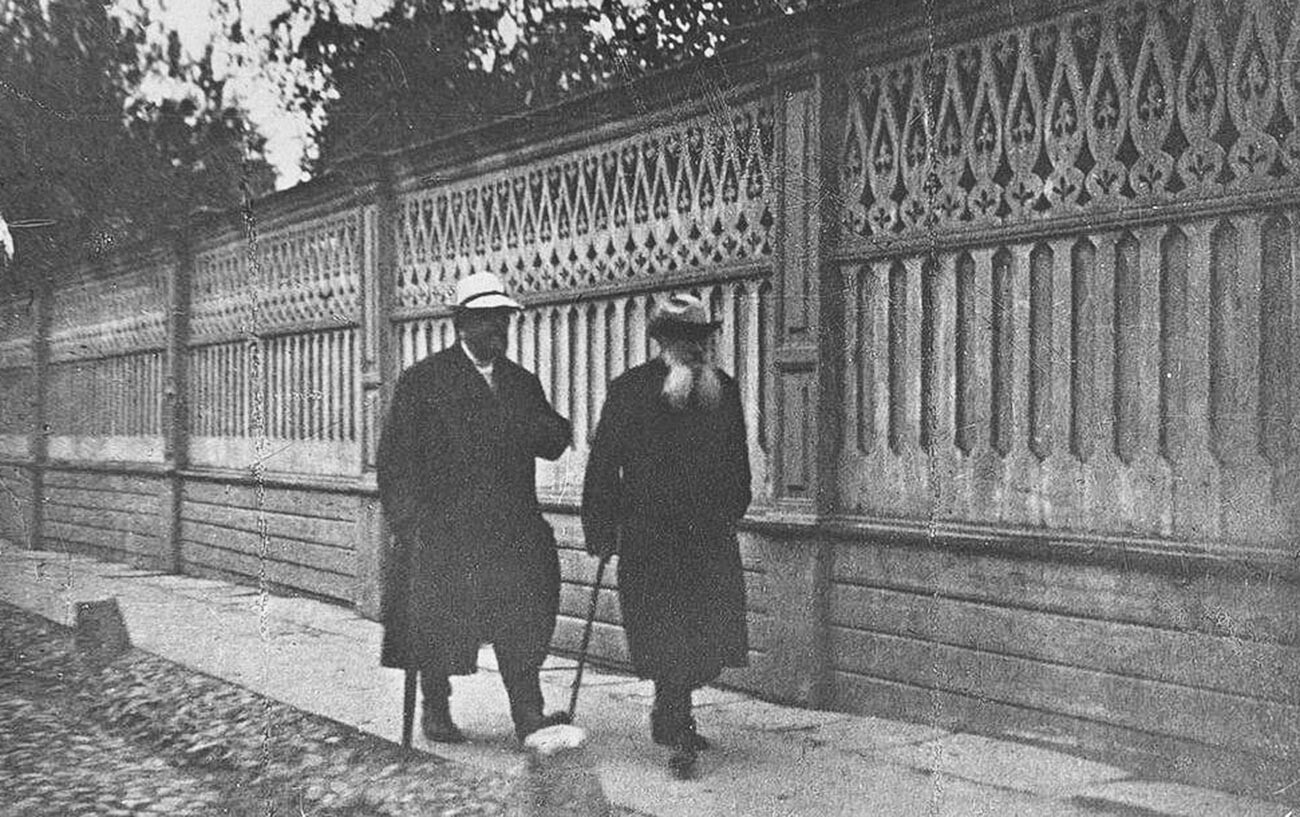 1896 saw the coronation of Nicholas II. The whole of Moscow was decorated magnificently for the occasion, and even Tolstoy’s wife with the couple’s younger children went to Moscow to watch the celebrations. 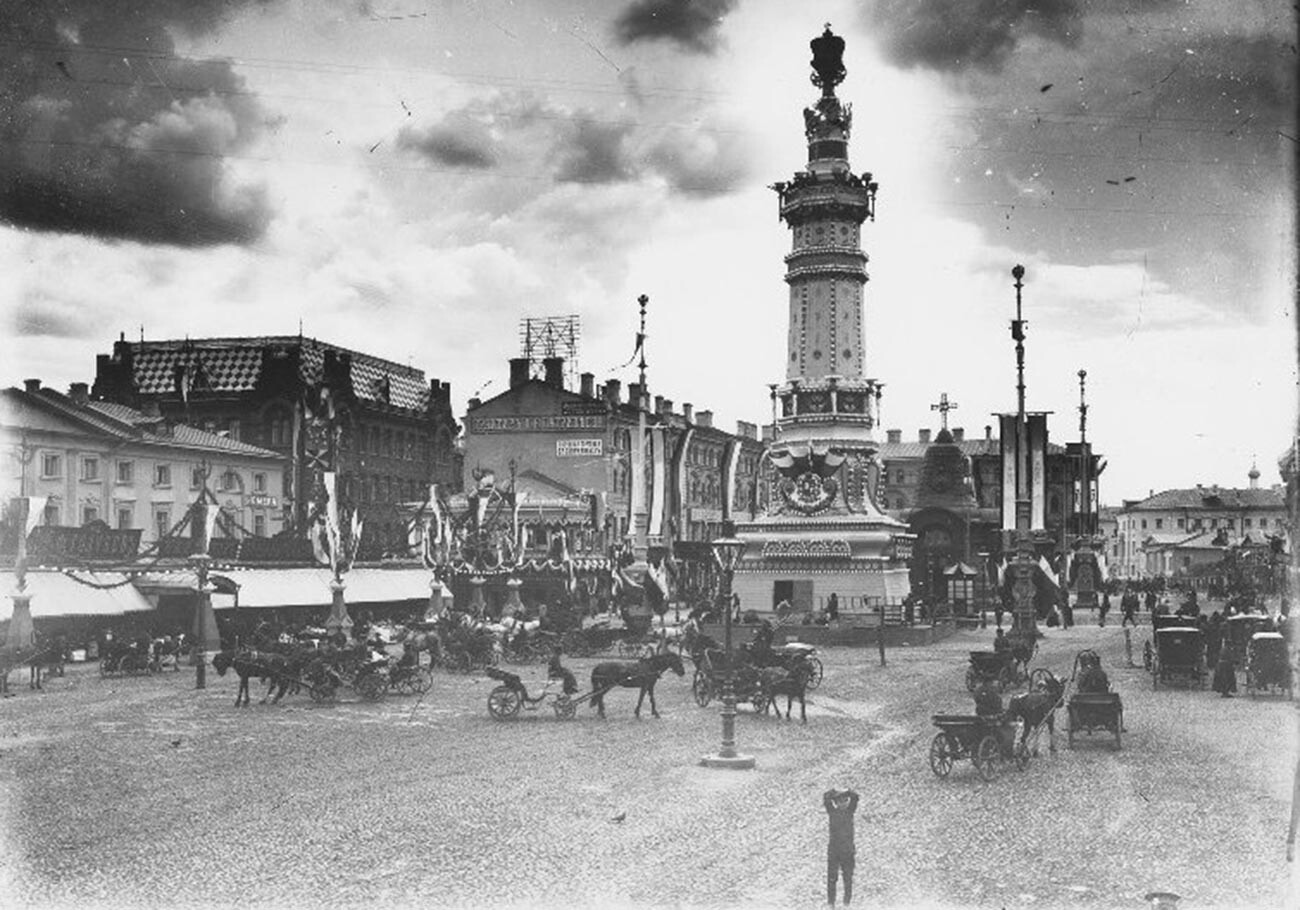 The great man himself, however, known for his near anarchist views, remained at Yasnaya Polyana and wrote in his diary: “I read about the coronation and was horrified by the deliberate deception of the people.” About the tragic death of people in a stampede at Khodynskaya Field, he noted: “A terrible event in Moscow, 3000 dead.” The photo depicts the adorned Pashkov House, opposite the Kremlin. 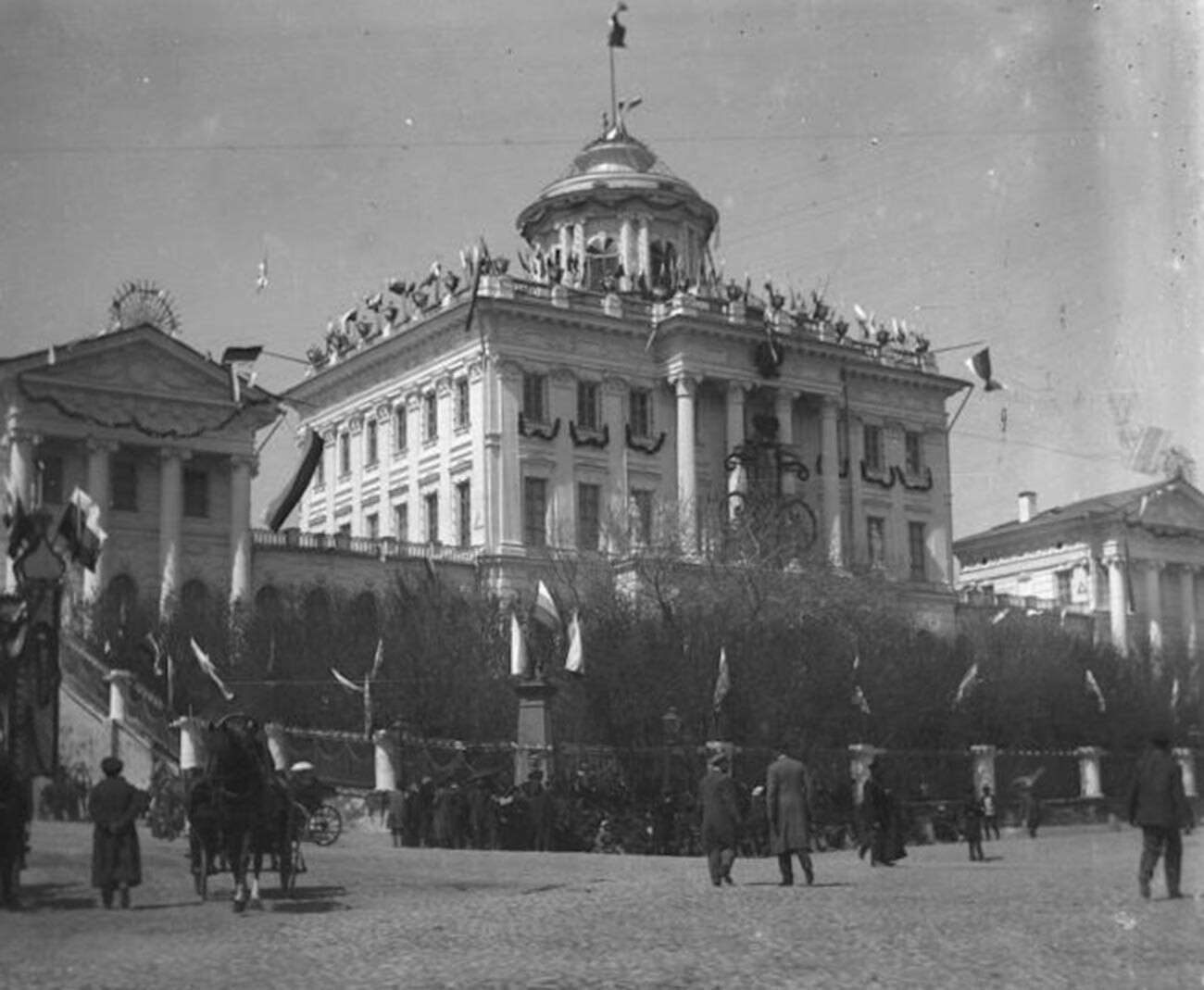 Incidentally, Tolstoy’s aunt, Alexandra Andreyevna Tolstaya, was a maid of honor at the imperial court. She often defended her “anarchist” nephew before the emperor himself. 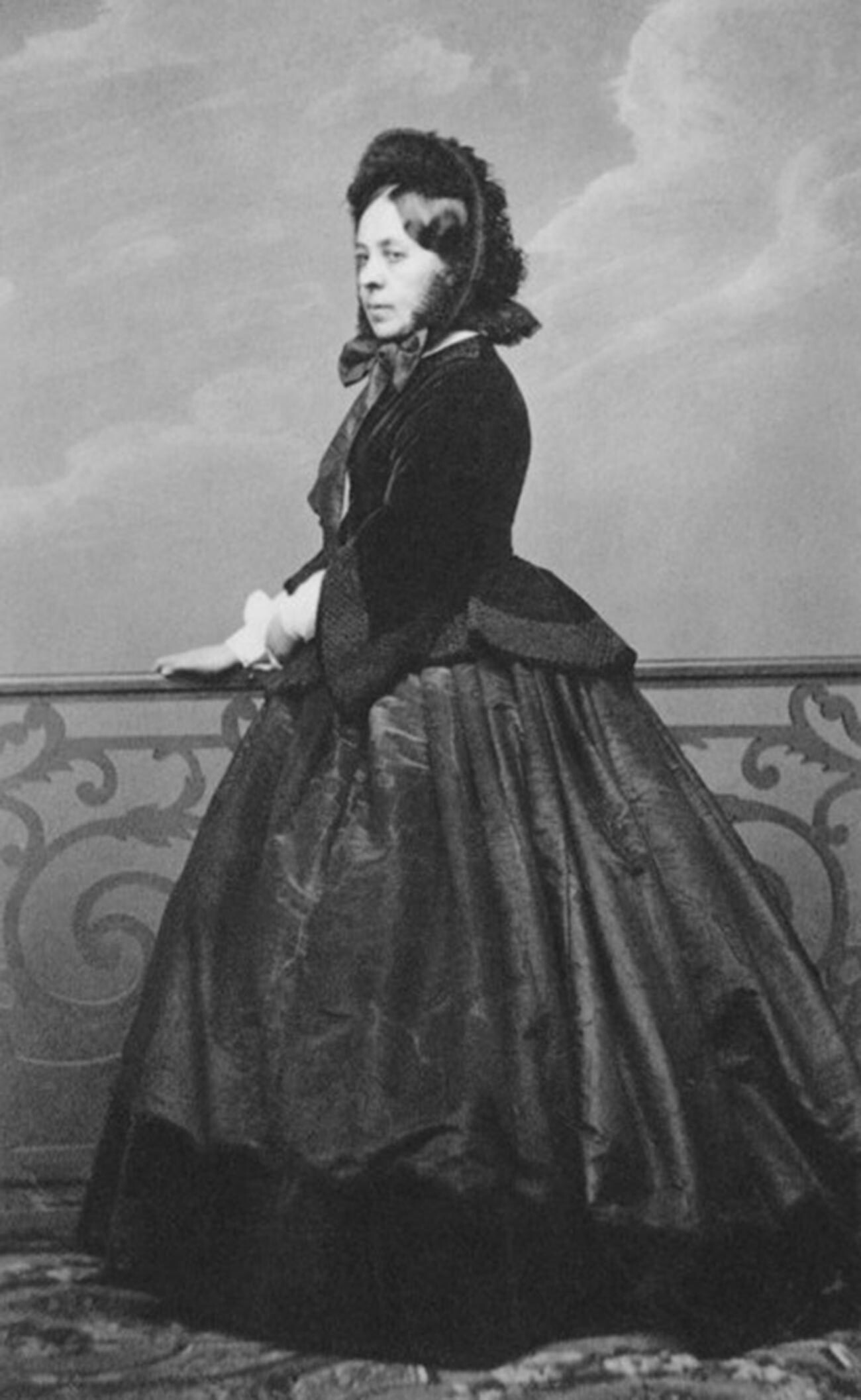 In the 1890s, one of the most unusual houses in Moscow was constructed: the neo-Moorish mansion of merchant Arseny Morozov on Vozdvizhenka Street. Today it is the Reception House of the Russian government, but back then the whole city poked fun at it. The hoopla did not pass Tolstoy by, and it had a cameo role in his novel Resurrection: walking past it, the main character Nekhlyudov muses that it is “a stupid unnecessary palace for some stupid and unnecessary person.” 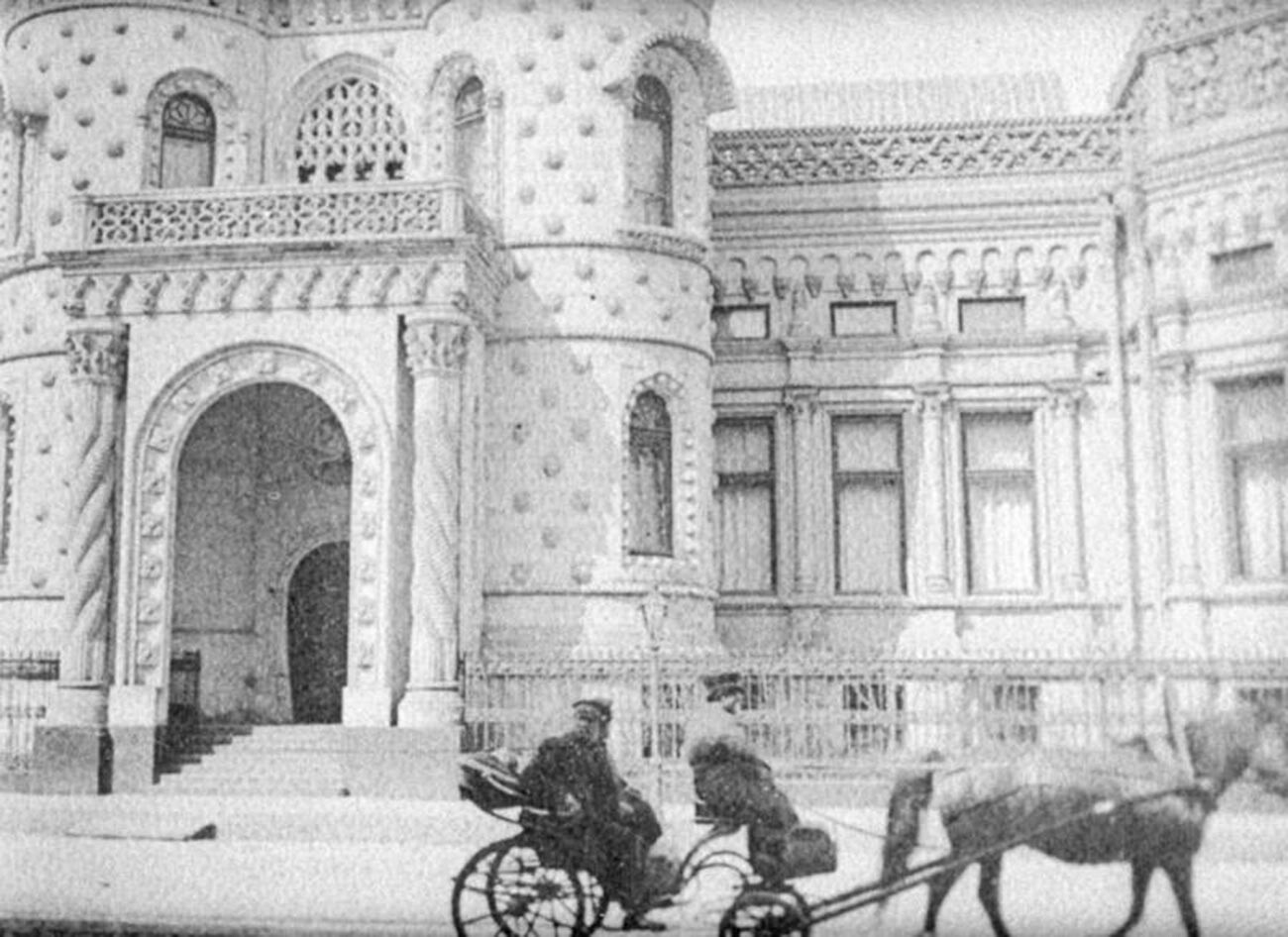 Tolstoy knew the two faces of Moscow: one pompous and ornamental, the other squalid and sordid. The photo shows Sukharev Market and the now lost Sukharev Tower. This area adjoined Khitrovka, Moscow’s seediest district, teeming with low-life and criminals. 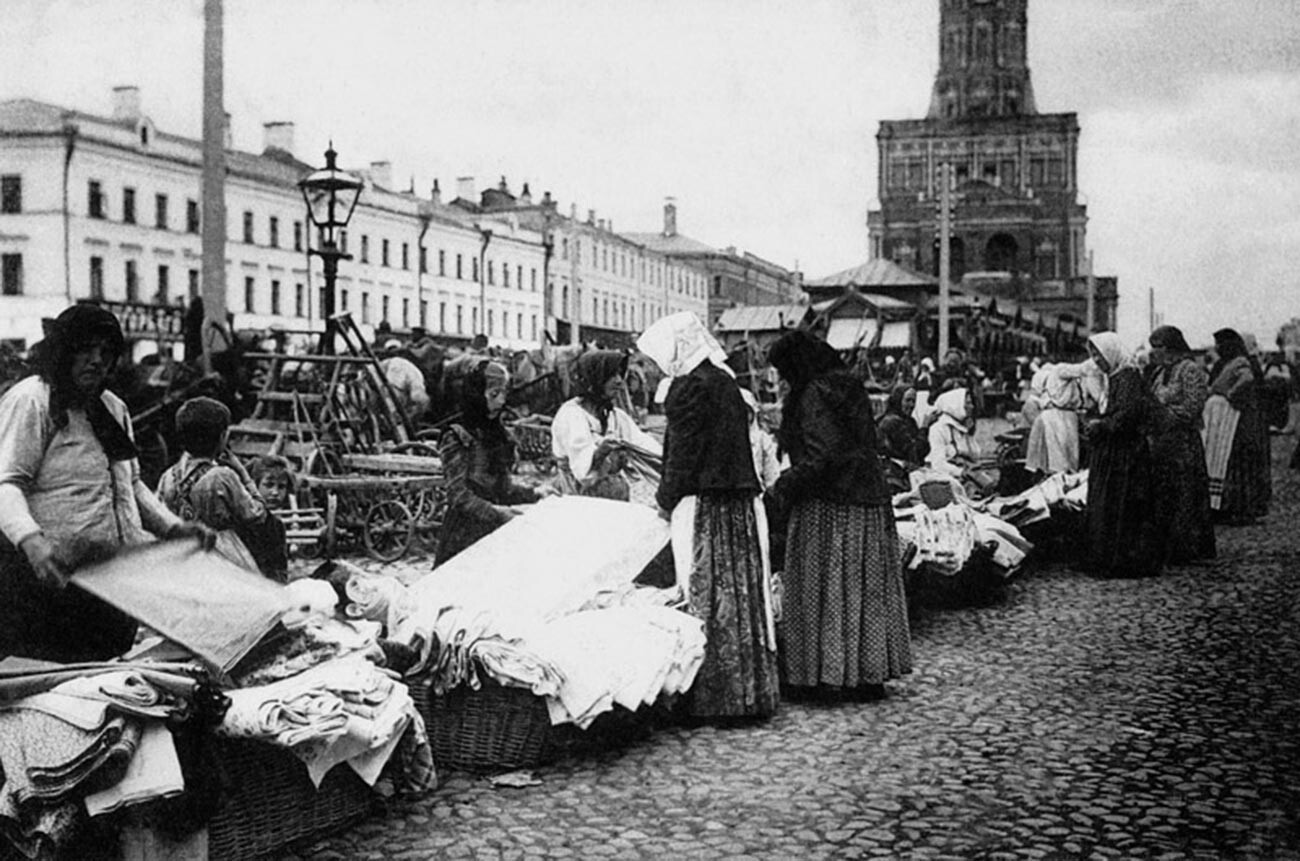 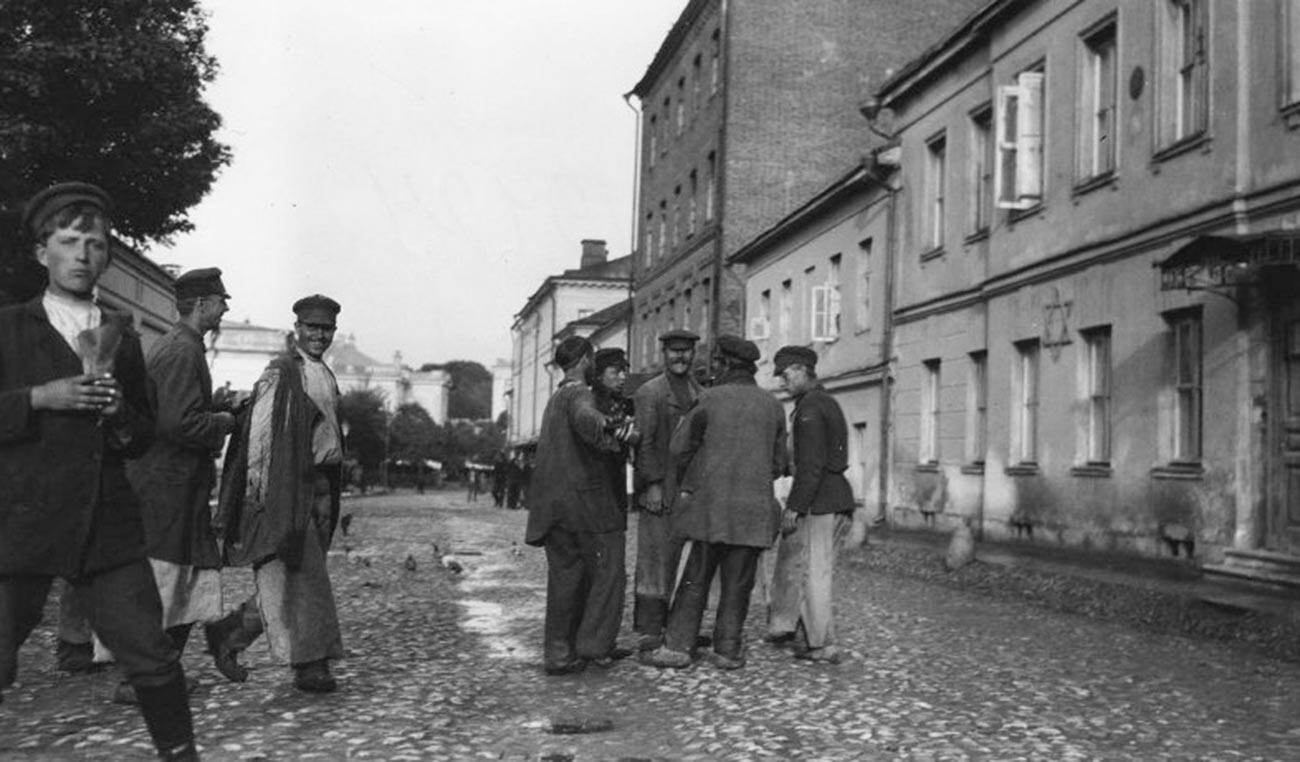 And yet, modern Moscow is very different from what Tolstoy saw. For example, in the Soviet era, the Kitay-Gorod wall, which, like the Kremlin, was a fortification, was demolished. Before that, it was possible to enter the heart of the city only through gates, one of which, the Vladimir Gate on Lubyanka, is pictured. 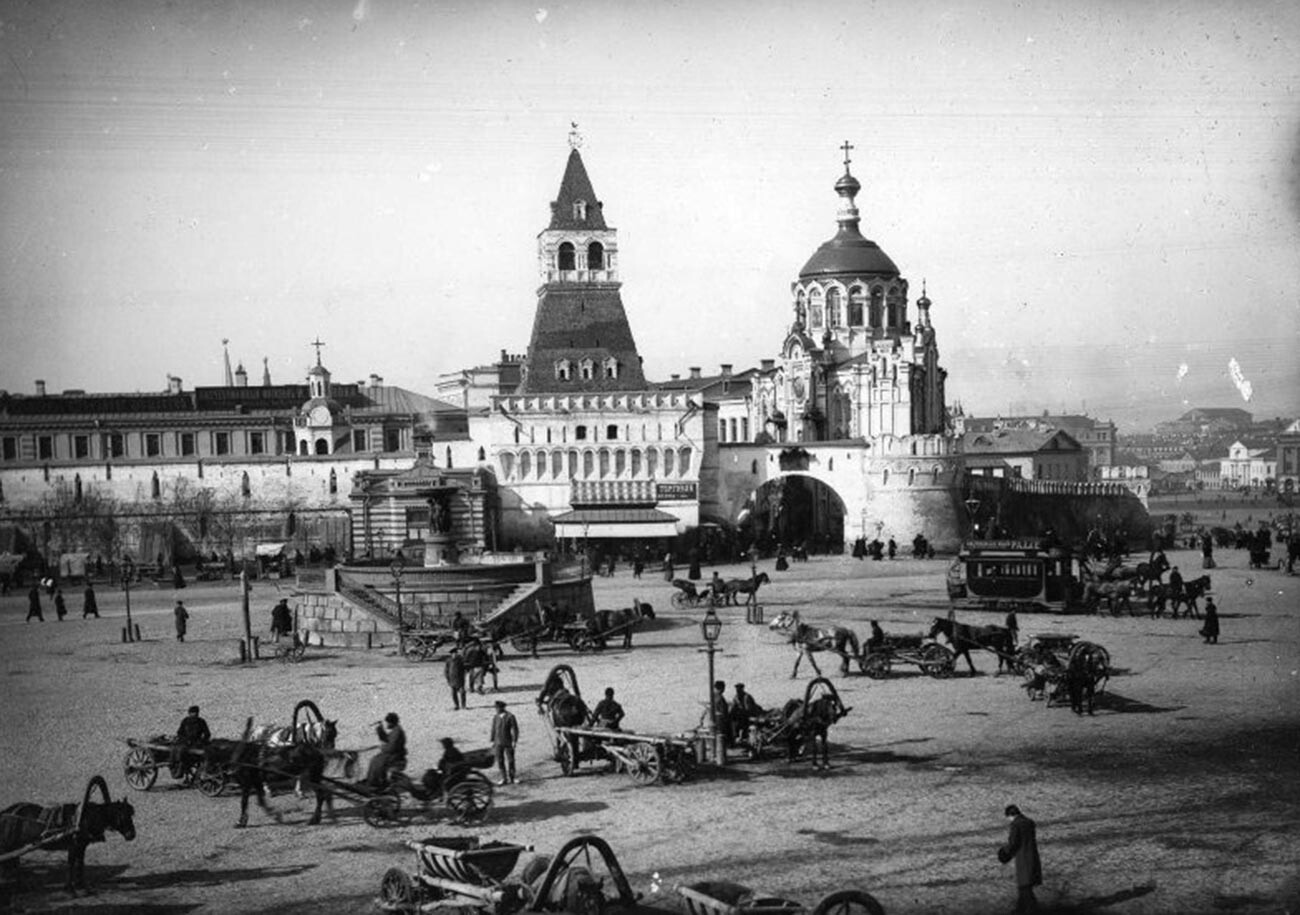 In the 1870s, the first horse-drawn railroad appeared in Moscow, essentially a wagon pulled by a horse. Tolstoy adored all technical innovations, and, of course, loved riding the new horse tram. “I watched with joy and amazement as Tolstoy sprang nimbly and youthfully [at the age of 72] onto the footboard of the moving car <...> There were a lot of people inside, so he had to stand on the footboard for a long time until the passengers squeezed in and found space for him,” historian Nikolai Nikolsky recalled in 1900. 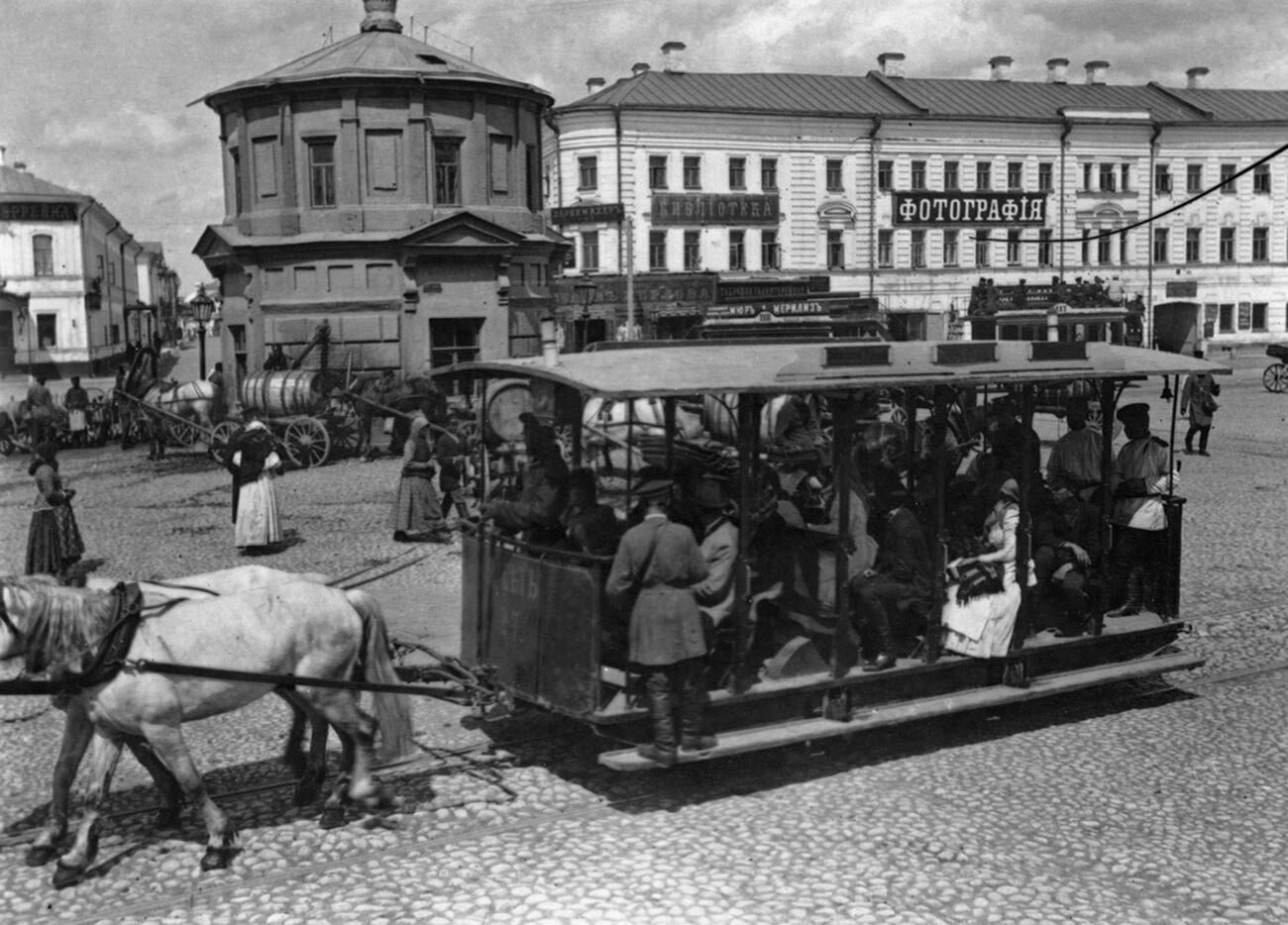 Union of Photographers of Russia/russiainphoto.ru

Last but not least, Leo Tolstoy in the Moscow Zoo! One of the oldest in Europe, the Moscow Zoo was founded in 1864 and is still there today. 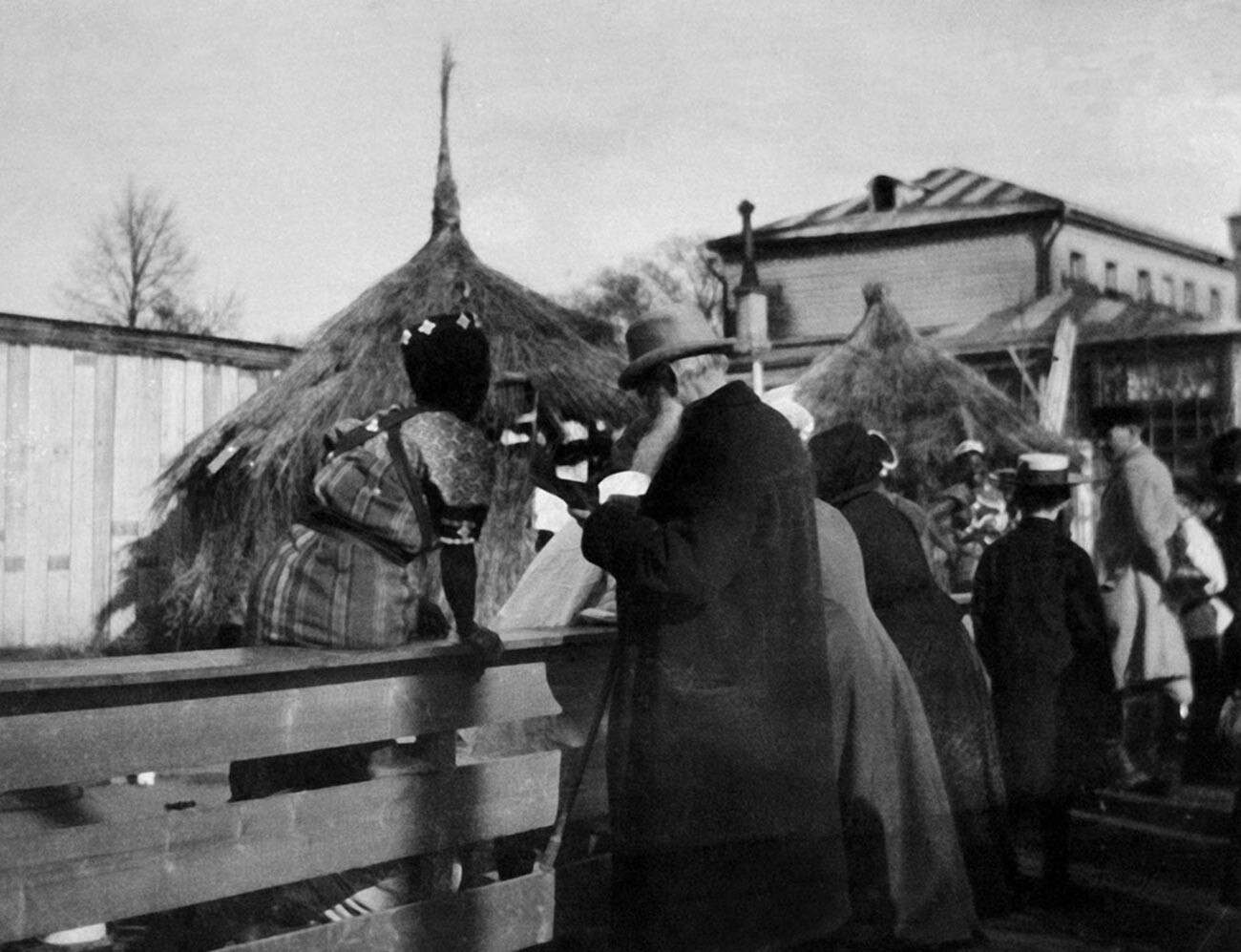