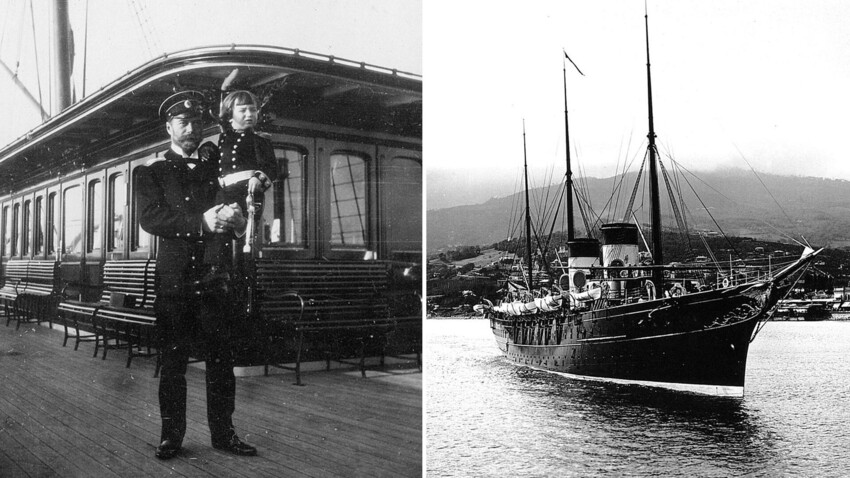 Public domain
The Romanovs didn’t just build yachts with crystal chandeliers, churches and cowsheds onboard. These were massive cruisers, capable of going into battle, if the situation demanded it.

The last Russian emperor is often considered one of the richest people in history. His worth was estimated at $250-300 billion, if we go by what the ruble was worth in 2010. A multitude of factors must be considered when speaking of the Royal family’s ‘bank account’ (not all is straightforward there), but what we know for sure is that living expenses left a massive dent in the Russian Empire’s treasury. In 1894-1914, the family had the largest yacht flotilla of all monarchs on the planet. These floating castles were formally owned by the maritime department, but, in practice, belonged to the Romanov family and built to its specifications.

In 1892, the maritime department ordered a Danish shipyard to build a cruiser, but Alexander III soon ordered to turn it into a yacht. It was already during Nicholas II that the yacht was finally lowered into water, using ‘Standart’ - a traditional name for a tsar’s vessel (the first yacht of this name saw the light of day during Peter I’s reign, almost 200 years earlier). 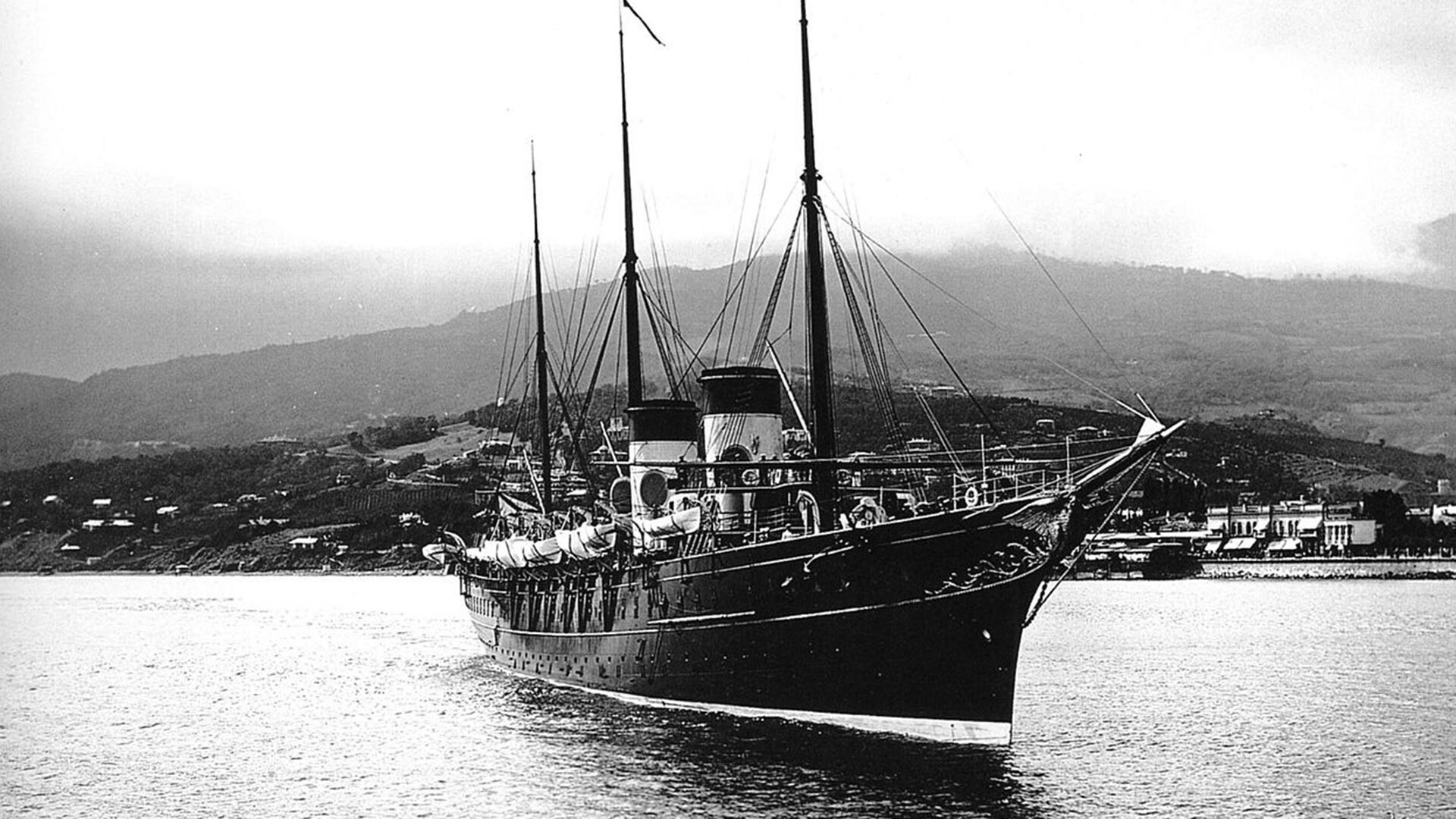 The cruiser yacht, meanwhile, was humongous: measuring 128 meters, it had a crew of almost 400! The Standart was the largest and most luxurious emperor’s yacht in the world, boasting a conference room, an exquisite dining hall for official visits, separate living room, ensuite amenities for every guest cabin and so on. The interior was fashioned with expensive wood and matched the Winter Palace in luxuriousness: crystal chandeliers, candelabras, velvet portiers and other bells and whistles. 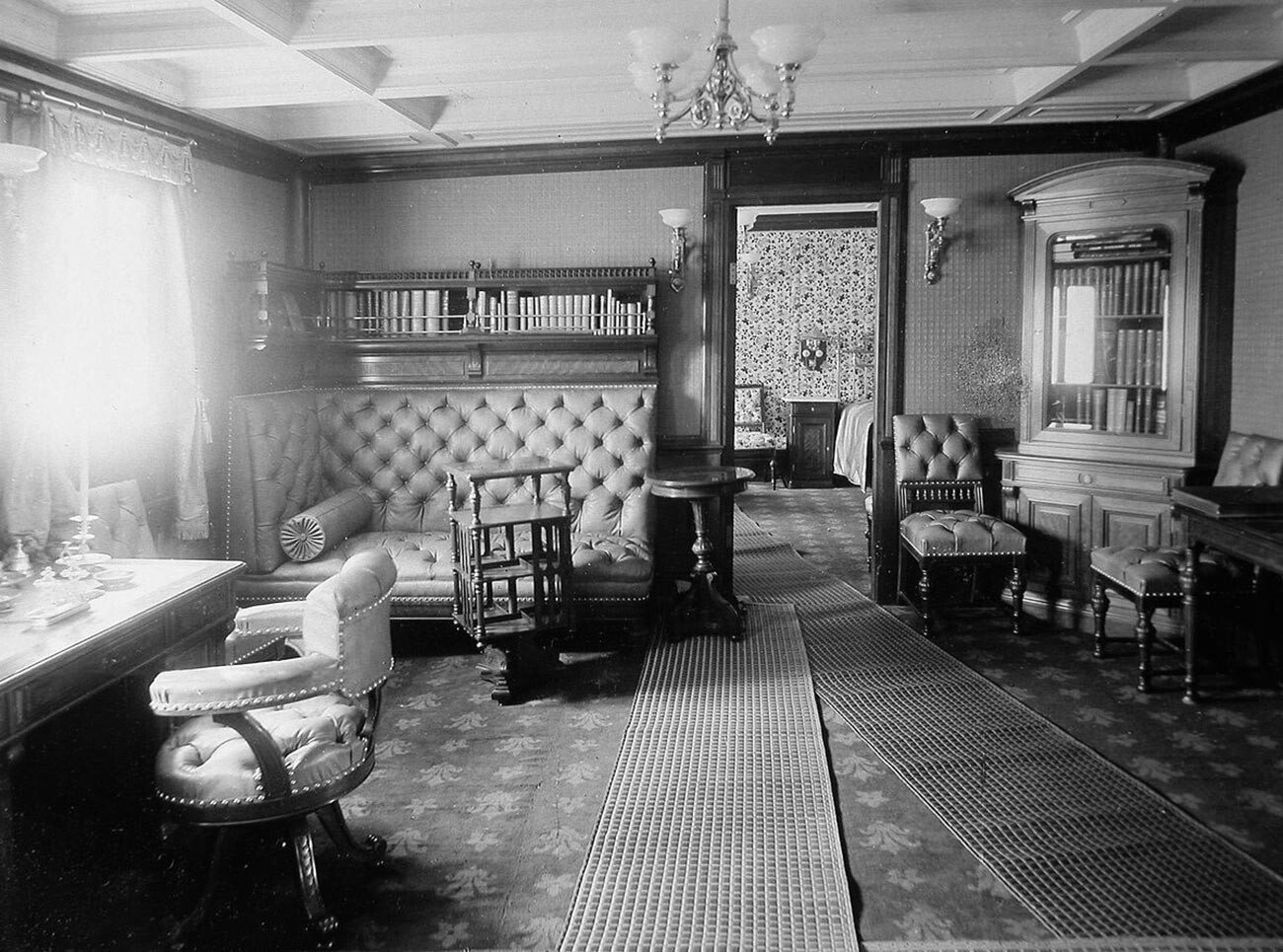 All of that was, of course, perfect for welcoming the most esteemed guests onboard: a Siamese King, a German Emperor and a French President were all visitors at one point. However, the yacht was just as likely to be used for family outings. Nicholas and his family loved to vacation from June to early August, usually on the Finnish islands. They would live on the yacht and only set foot on land for relaxing walks. 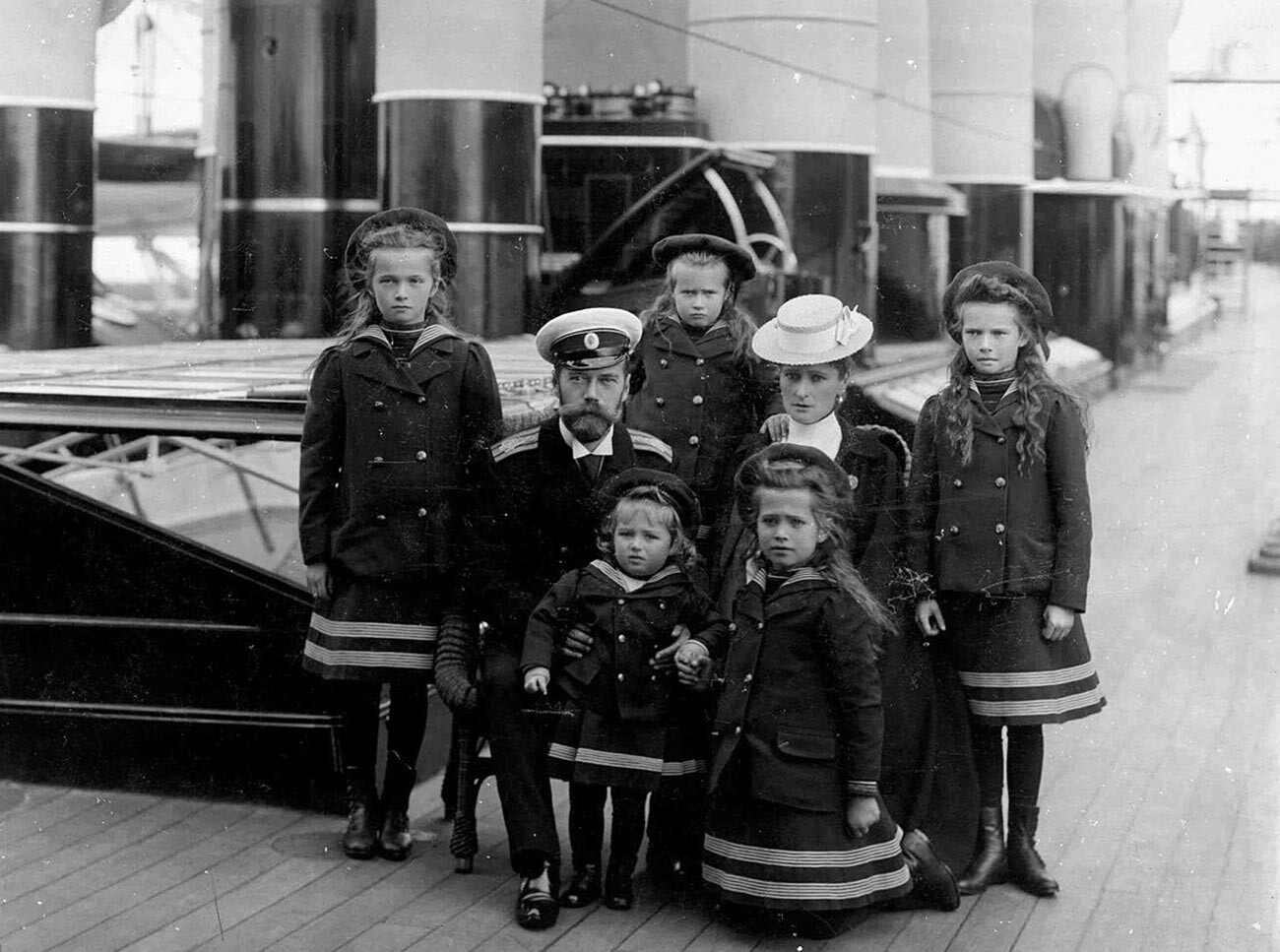 The Russian Imperial Family aboard the Imperial yacht Standart.

World War I put an end to those walks and yacht trips, for security reasons. In 1917, the tsar-cruiser became the site of a sailor rebellion - just as other vessels at the time, and already in April, the Baltic Fleet’s Revolutionary Committee took up residence in it. 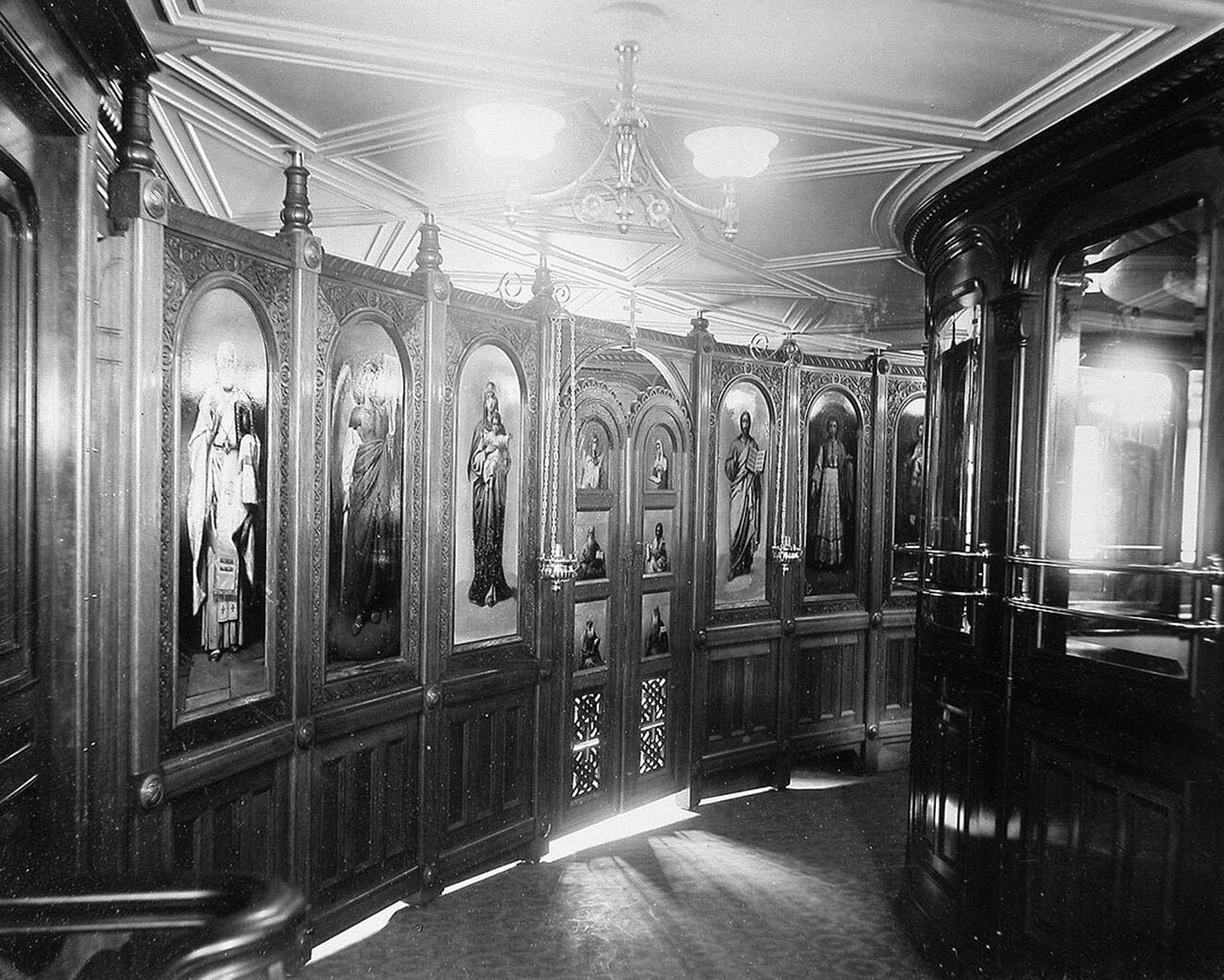 All of the metamorphoses that had taken place henceforth aboard the yacht did not exhibit even a trace of its former elitist flair. The ship was repurposed into a minelayer, then used in battle. After the war, the vessel served as a barracks on water and, from 1961, as target practice for missiles. By the end of the 1960s, it bore the unglamorous fate of being taken apart for parts and scrap metal. 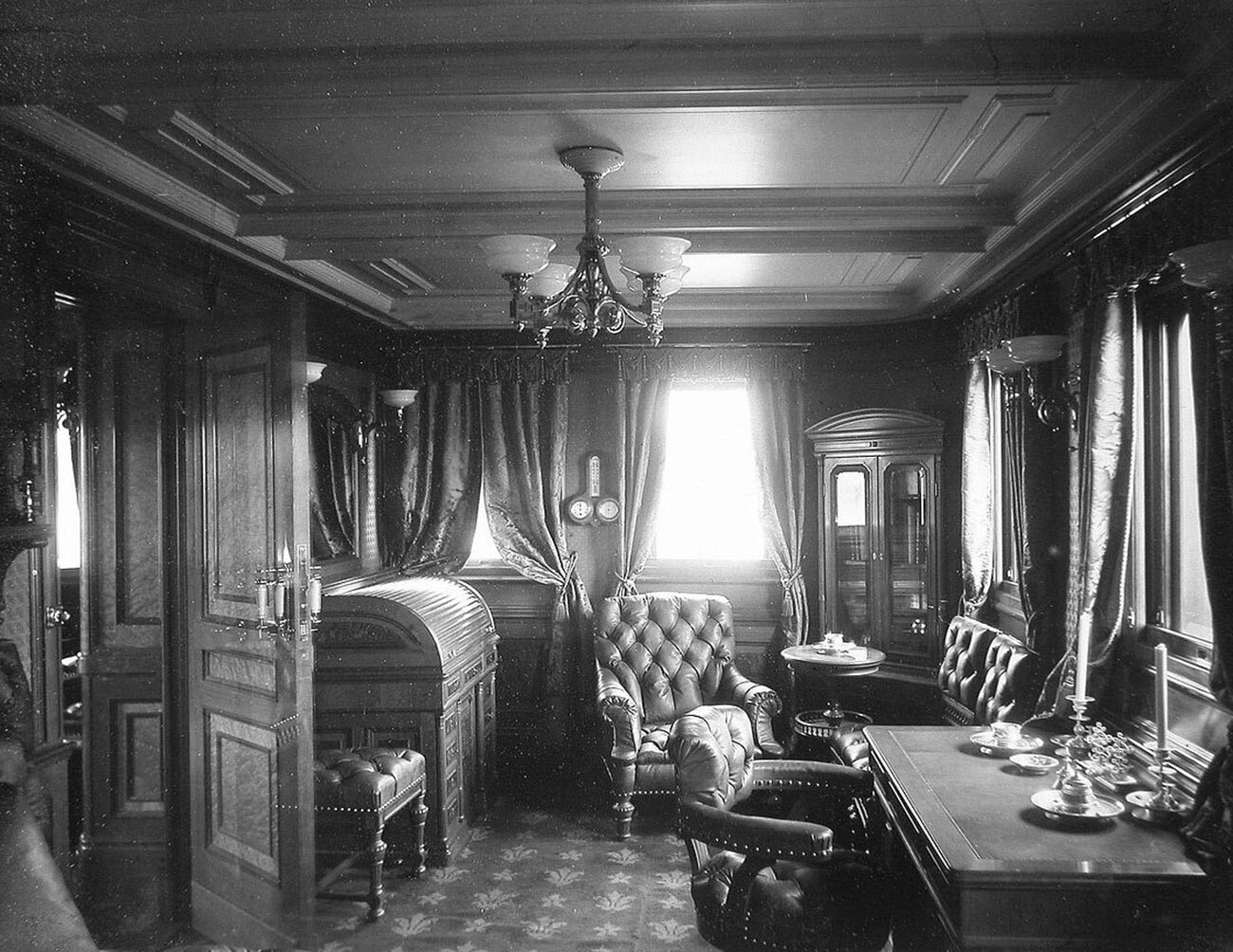 The ‘Polar Star’ appeared in the Royal family earlier than the ‘Standart’, in 1888. Its construction was also that of a cruiser yacht, with four 47-millimeter cannons on board. 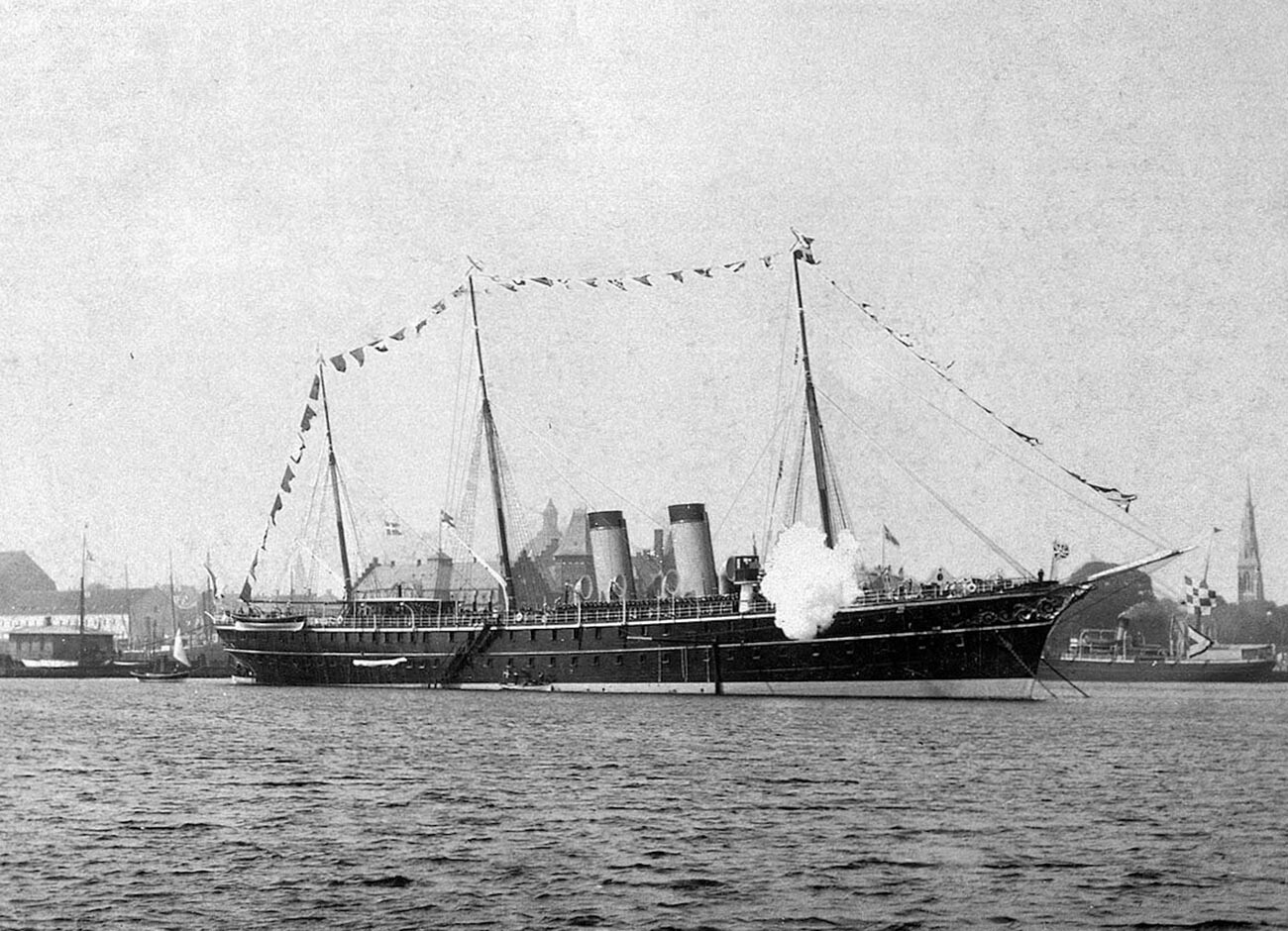 The cruiser served the Romanovs until 1914 and used to take the tsar on visits to European capitals, as well as participating in official military functions and celebrations. And, although the Polar Star was a more modest affair than the Standard, according to Count Ignatyev, “her rival”, which belonged to English Queen Alexandra of Denmark, Nicholas II’s aunt, “paled in comparison”. The Polar Star housed a church and even a cowshed, with a separate cabin. 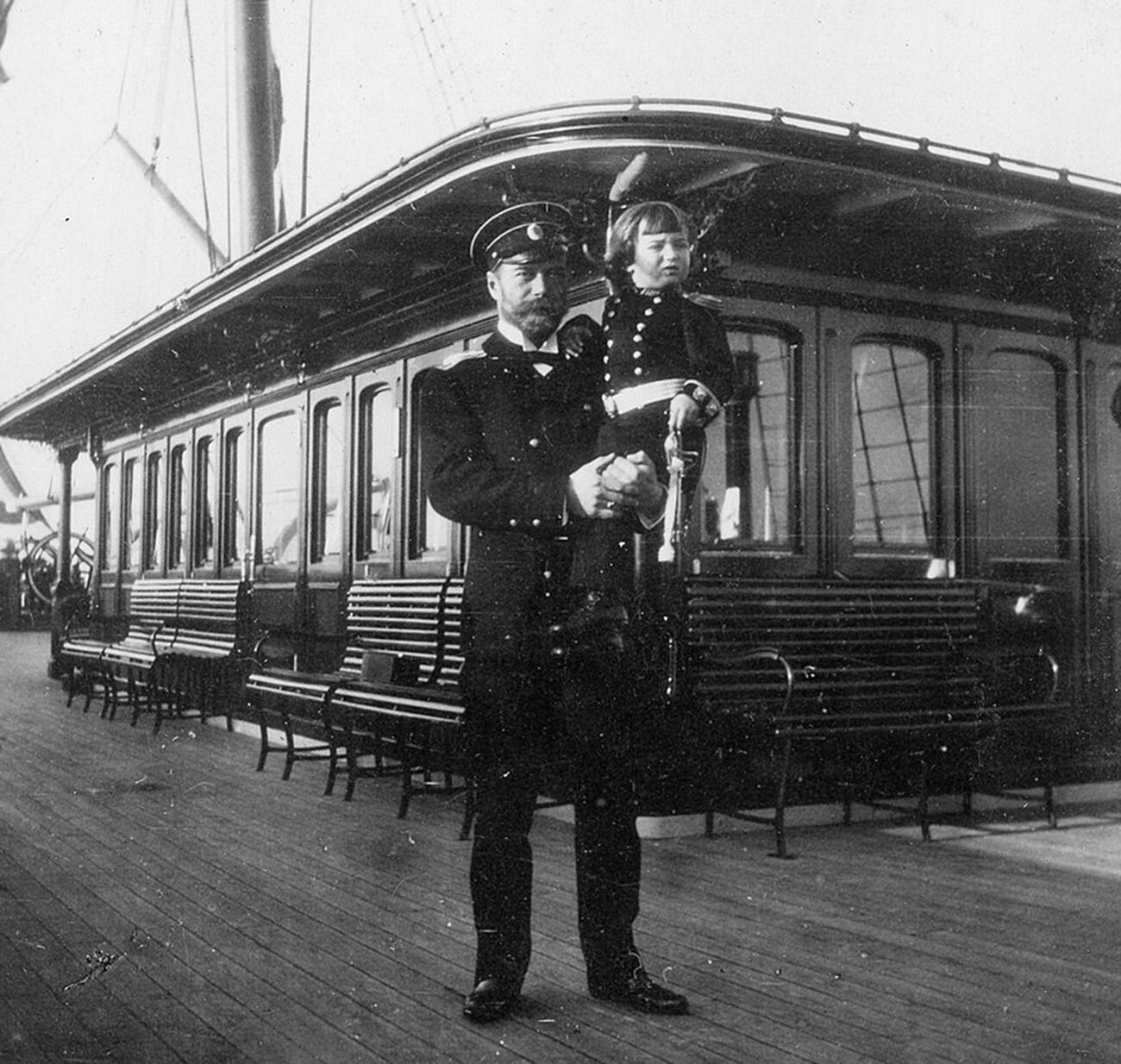 The yacht was most frequently spotted not at official state functions, but in a small Copenhagen port, where this “dark blue beauty, fringed with a massive gold rope”, voyaged every year with Nicholas’s mother, Maria Fedorovna, aboard. The Royal family loved going shopping in Copenhagen and, although the Danish capital was only a couple of days’ travel by train, the widowed empress preferred the yacht. 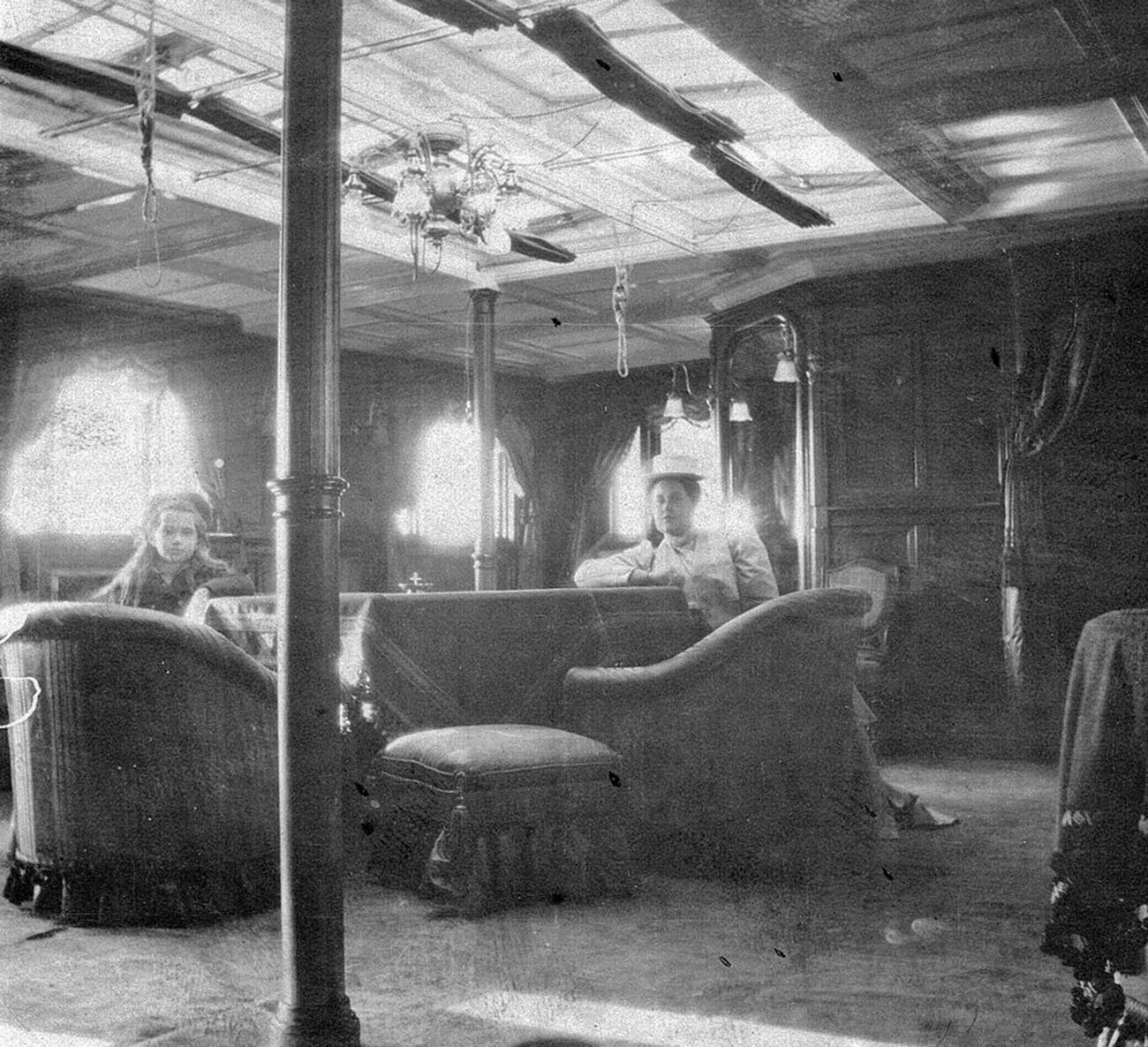 After the Revolution, the vessel faced a similar fate to the Standart. It was first taken up by revolutionary sailors, then, before World War II, it was repurposed to serve as a submarine mothership. In 1954, the former Romanov yacht was likewise turned into a floating barracks and, seven years later - into a target for missile tests. It was finally sunk in the 1960s.

Nicholas II’s uncle Prince Aleksey’s personal yacht, the ‘Svetlana’, was inspired by the 2nd class French armored cruiser, the ‘Catinat’, so was given to French engineers to design. It was lowered into the water in 1897. 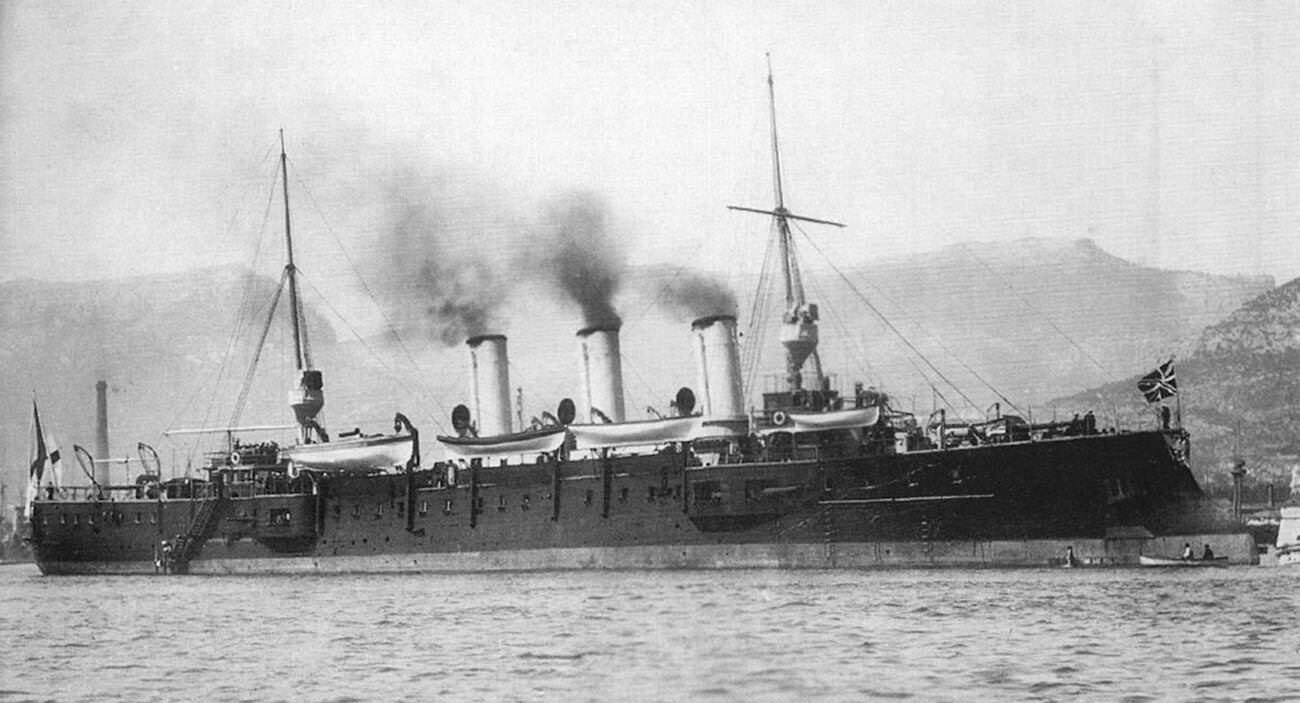 Due to the fact that the ship was first intended for Grand Duke Aleksey Aleksandrovich, it contained luxurious chambers, fashioned with expensive wood, marble and persian rugs. The Portuguese queen once took a 45-minute tour of the yacht, allegedly never hiding her amazement. 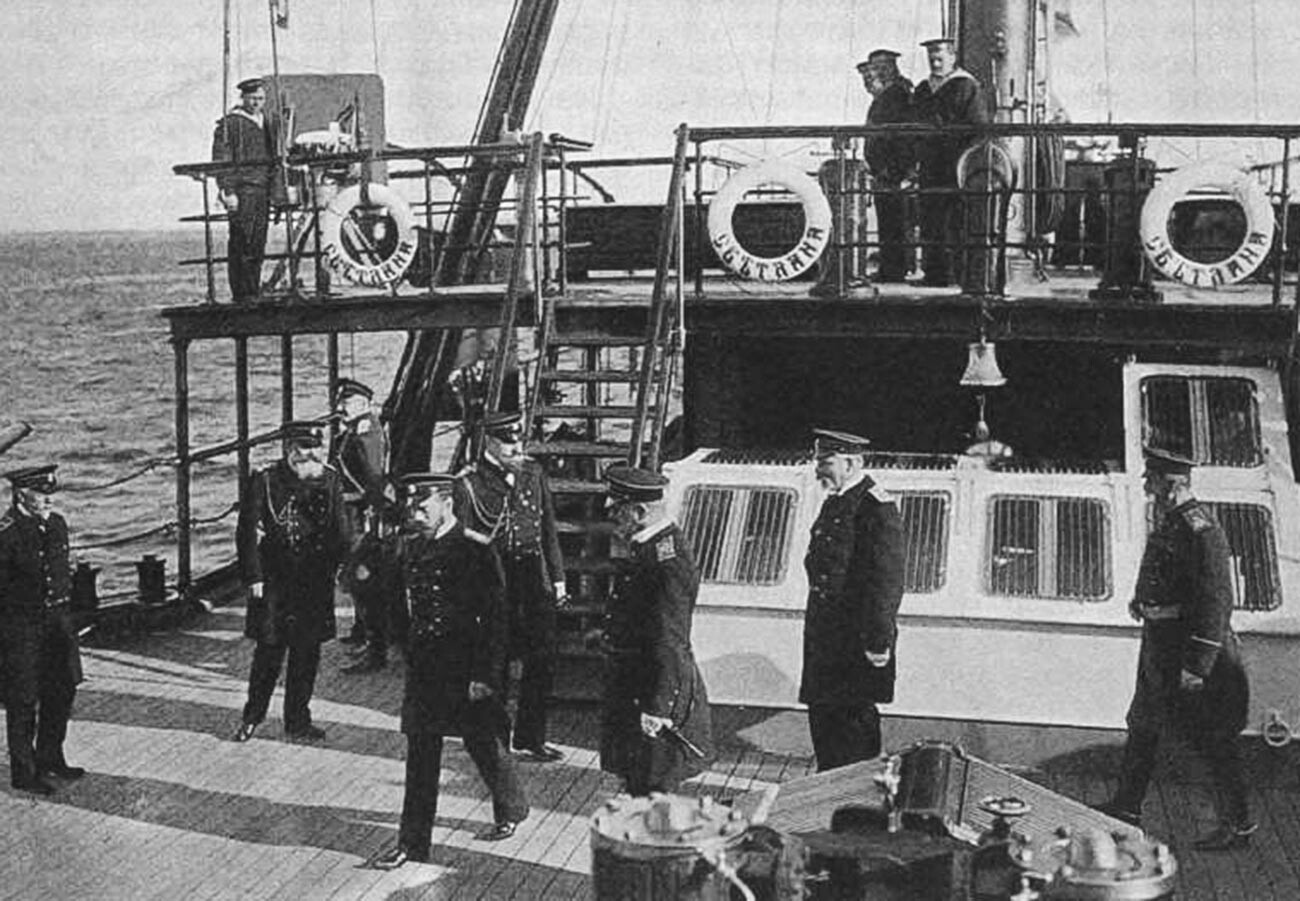 But, aside from taking the Royal family on vacations and serving as an armored minelayer and escort, the vessel also managed to take part in battle. Aside from soft couches and marble, the ship was armed to the teeth: in 1904, it was included in Russia’s Pacific Fleet and sent to fight in the Russo-Japanese War. Having received a direct shell hit during the Battle of Tsushima, the cruiser attempted to get itself to safety, but was detected and sustained heavy Japanese fire. Almost 300 sailors lost their lives. An investigative committee set up after the battle determined that the crew of the Svetlana “showed exemplary fortitude and self-sacrifice”. This appraisal was especially important to those who had survived: prior to the war, the Pacific Fleet’s sailors considered them “maids” and their ship - a “floating hotel”, instead of a fighting unit. 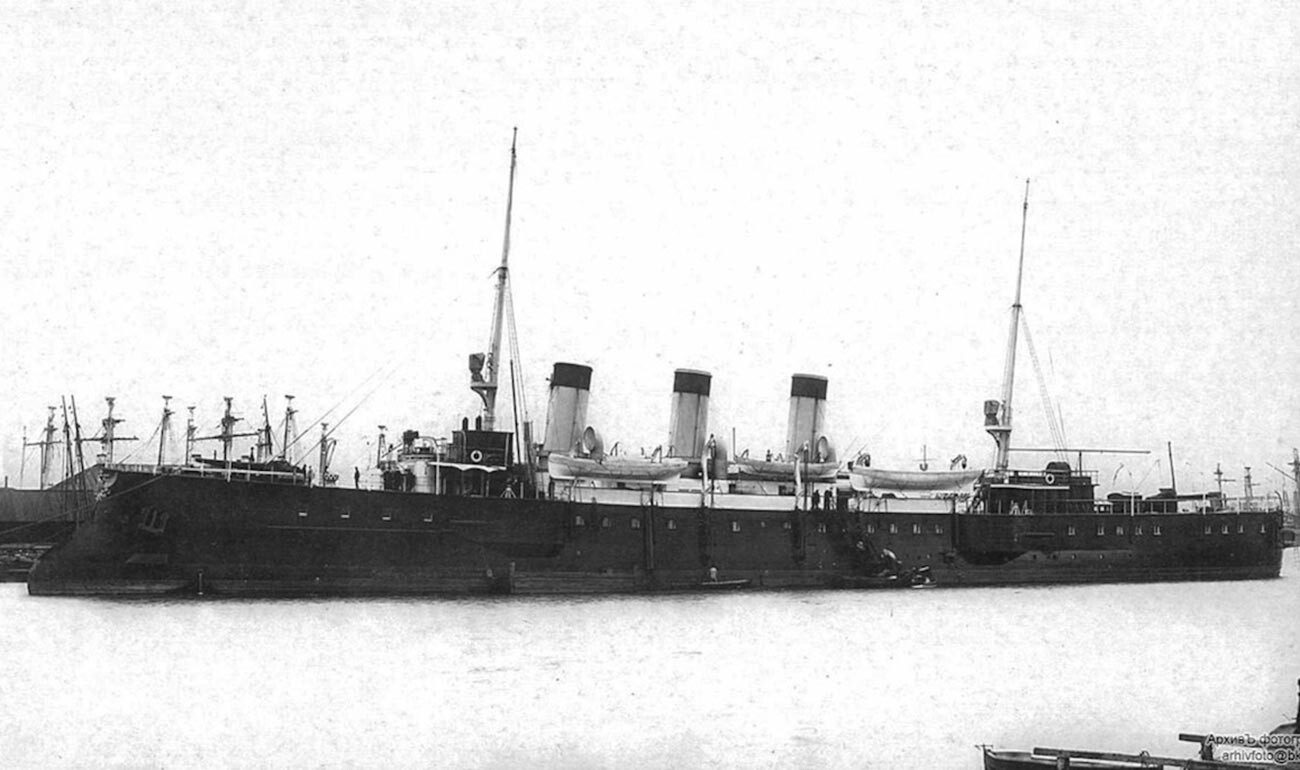 The list didn’t end there. Almost every Romanov relative used to own their own cruiser. From 1905, one such vessel - the ‘Almaz’ (‘Diamond’) - acted as a double. For six long years, it would swap places with the Standart in Finland - their silhouettes were extremely similar. The security measures weren’t unfounded: there was word that, in 1907, a floating mine was spotted on approach to Kotkin Bay. The Almaz was docked in the Standart’s place that day. 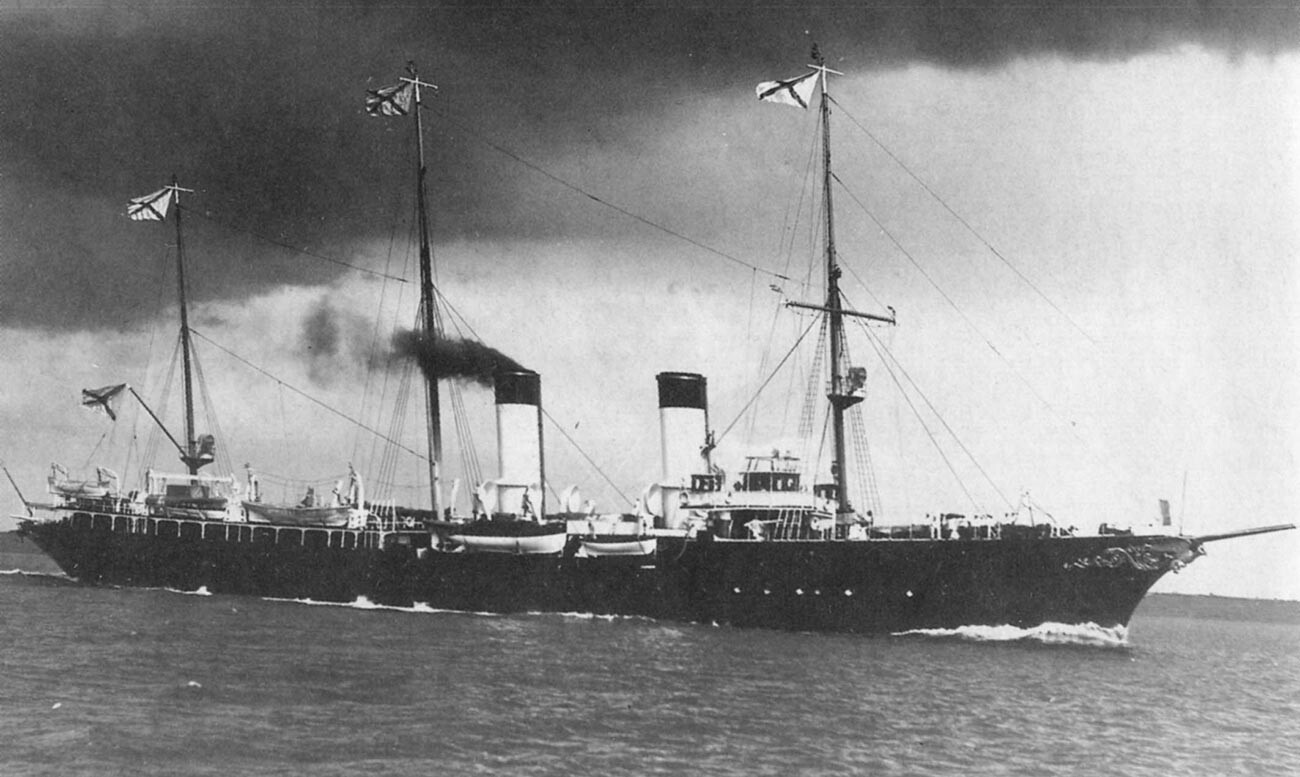 However, aside from these humongous yachts, the Romanovs also used a dozen smaller ones: the ‘Tsarina’, ‘Aleksandria’, ‘Slavyanka’, ‘Livadia’ and others. They were used for relaxed outings around that same area and not for official state visits to Europe. 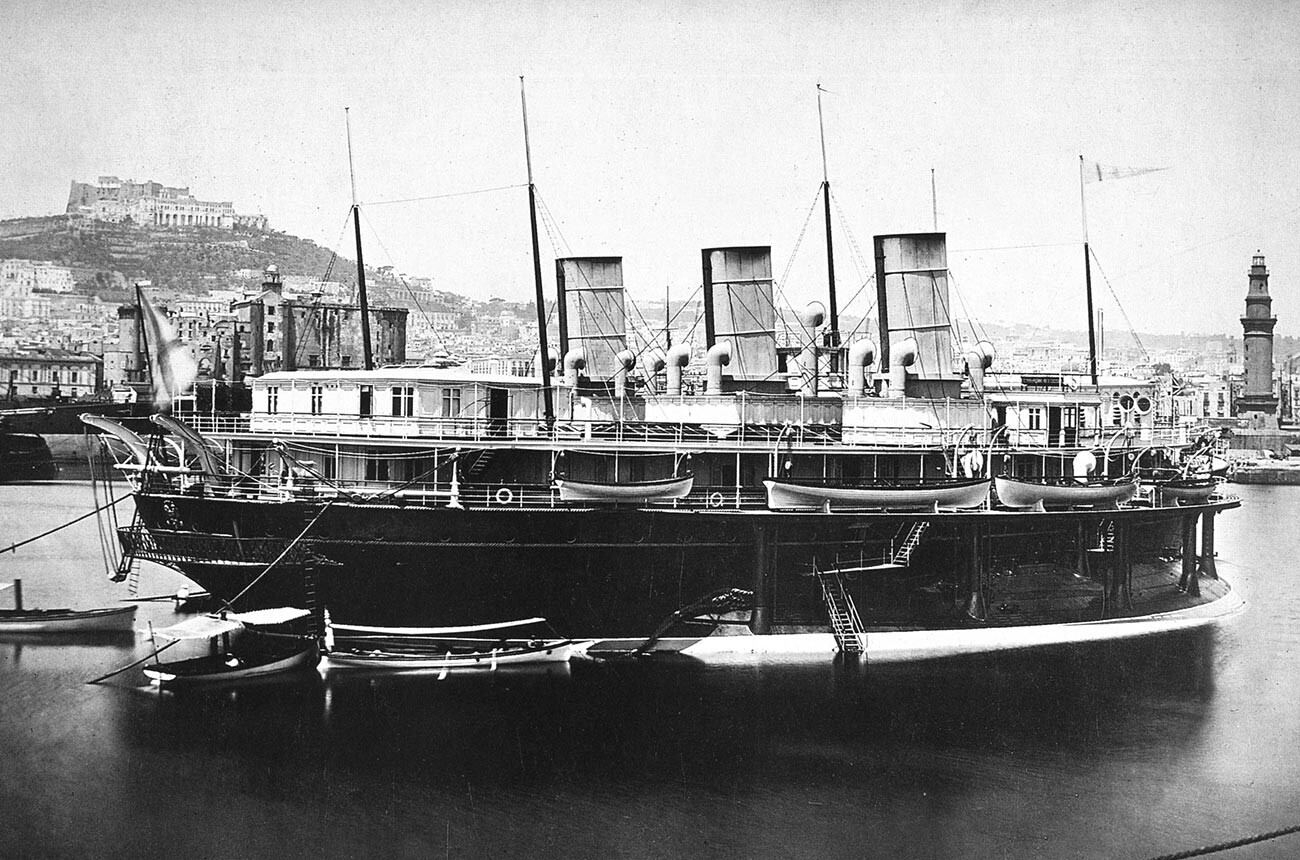