How Napoleon’s cousin persuaded the Russian tsar to capture Paris 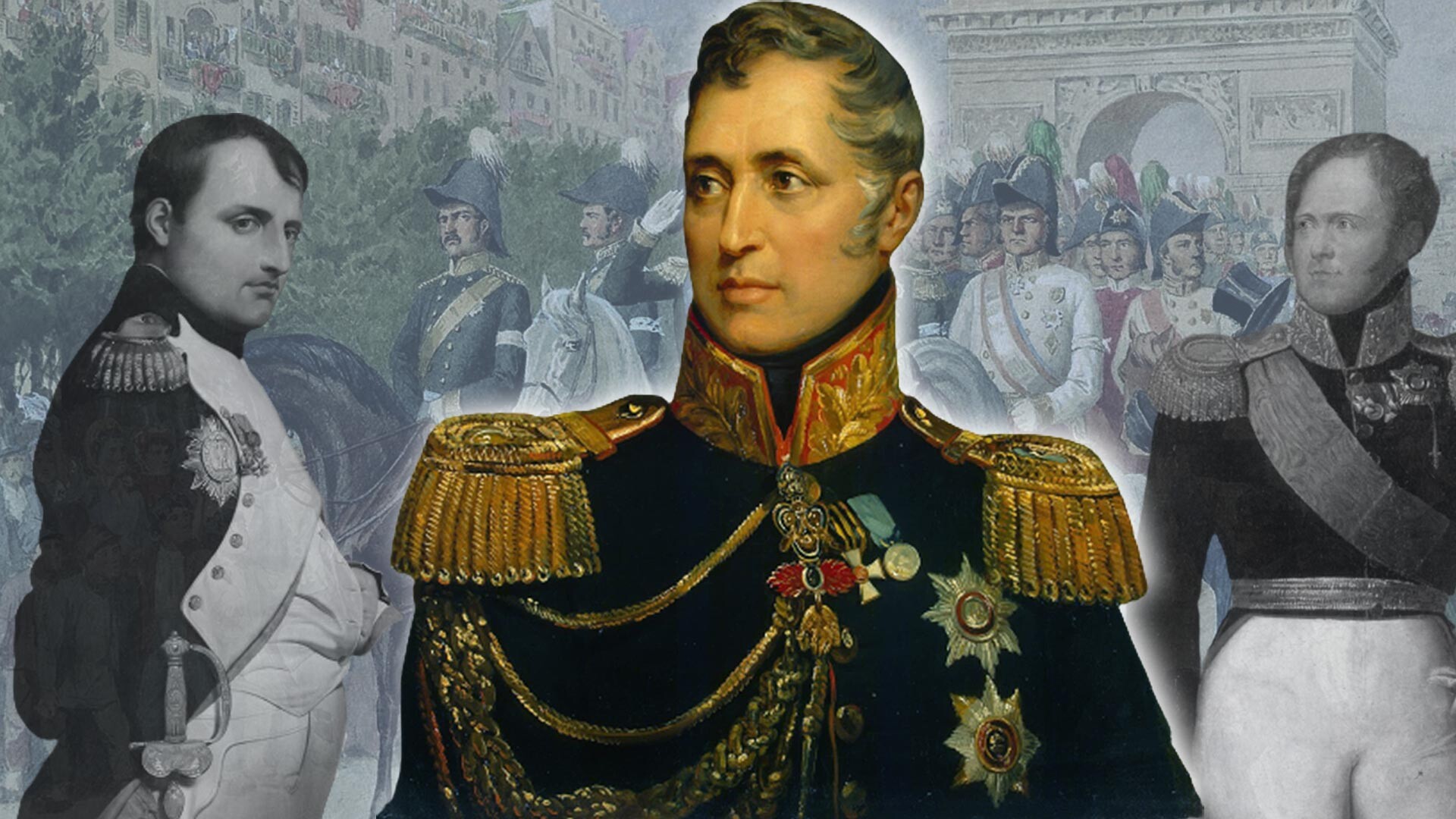 Russia Beyond (Photo: Public Domain; Paul Delaroche; Alexey Kivshenko)
Charles-André Pozzo di Borgo was a sworn enemy of the French emperor and played a significant role in his fall. During his feud with Napoleon, he even went into the service of Alexander I.

“Pozzo di Borgo hated and, at the same time, deified Napoleon more than anybody,” said French historian Albert Vandal, describing one of the most influential Russian diplomats of the 19th century, who was Napoleon’s fifth cousin and became his sworn enemy.

While being held in exile on Saint Helena, Napoleon wrote in his memoirs that the advice of Pozzo di Borgo to the Russian emperor changed the fate of France, Europe and the whole world.

From love to hate 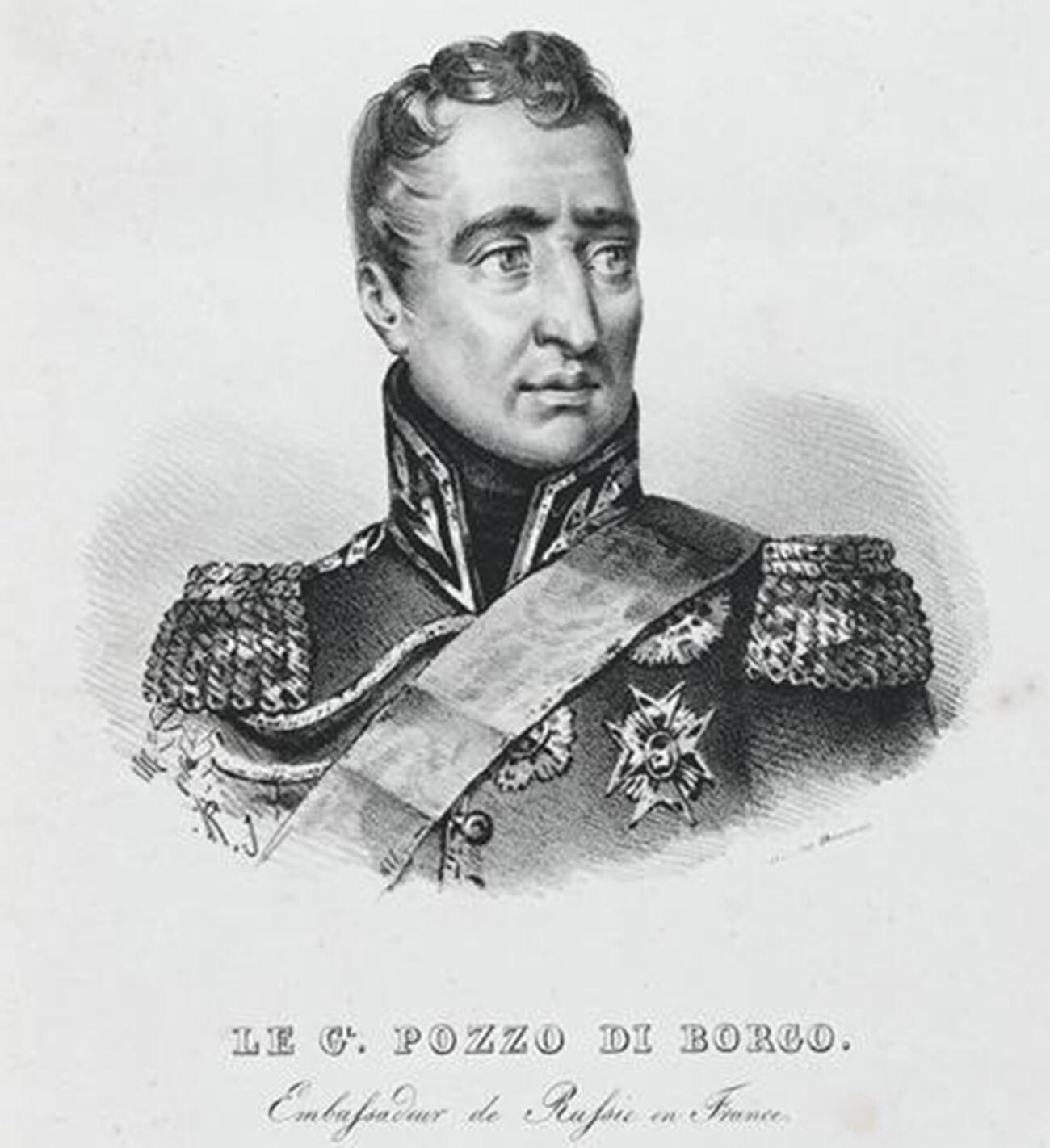 Charles-André Pozzo di Borgo was born into an ancient Corsican family whose history was closely intertwined with the no less ancient Buonaparte family. The two families were linked by distant kinship and acted from time to time as allies and rivals.

As a child, Charles-André was a friend of Napoleon and his family. For some time, he even lived at their house in Ajaccio. The views of the boys then fully coincided. They both dreamed of Corsican independence, which was practically achieved shortly before their birth in the fight against Genoa, but was lost with the arrival of the French in 1769.

A difference of opinion between the two appeared soon after Napoleon’s departure to France for his studies. Years on the mainland turned an ardent Corsican patriot into a true Francophile. 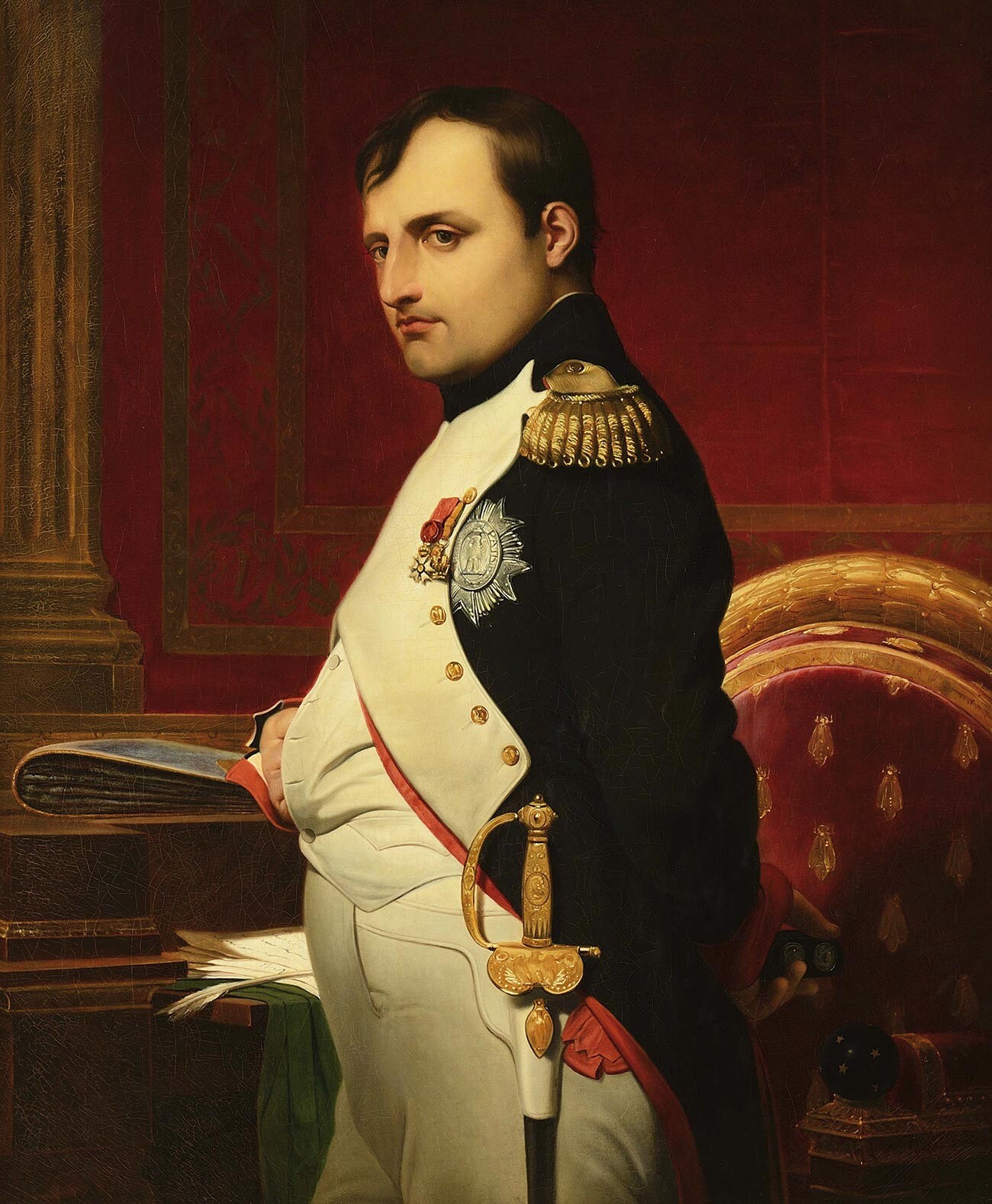 The sibling rivalry began during the Great French Revolution, when Bonaparte became an ardent opponent of Corsican independence. In the spring of 1793, Pascal Paoli, leader of the Corsican national liberation movement, announced that he had severed relations with Paris and had called on the British for help. In the following year, the proclaimed Kingdom of Corsica came under the protectorate of British King George III and Paoli’s chief associate, Pozzo di Borgo, was appointed president of the local Council of State.

Bonaparte’s family spoke out against Charles-André, accusing him of high treason. However, the latter did not remain in debt, becoming the main initiator of the expulsion of Napoleon from the island.

In October 1796, due to the brilliant victories of Napoleon in northern Italy, the British were forced to evacuate their troops from Corsica. The French reoccupied the island and, now, Pozzo di Borgo himself had to flee. Bonaparte personally crossed his name off the amnesty list. 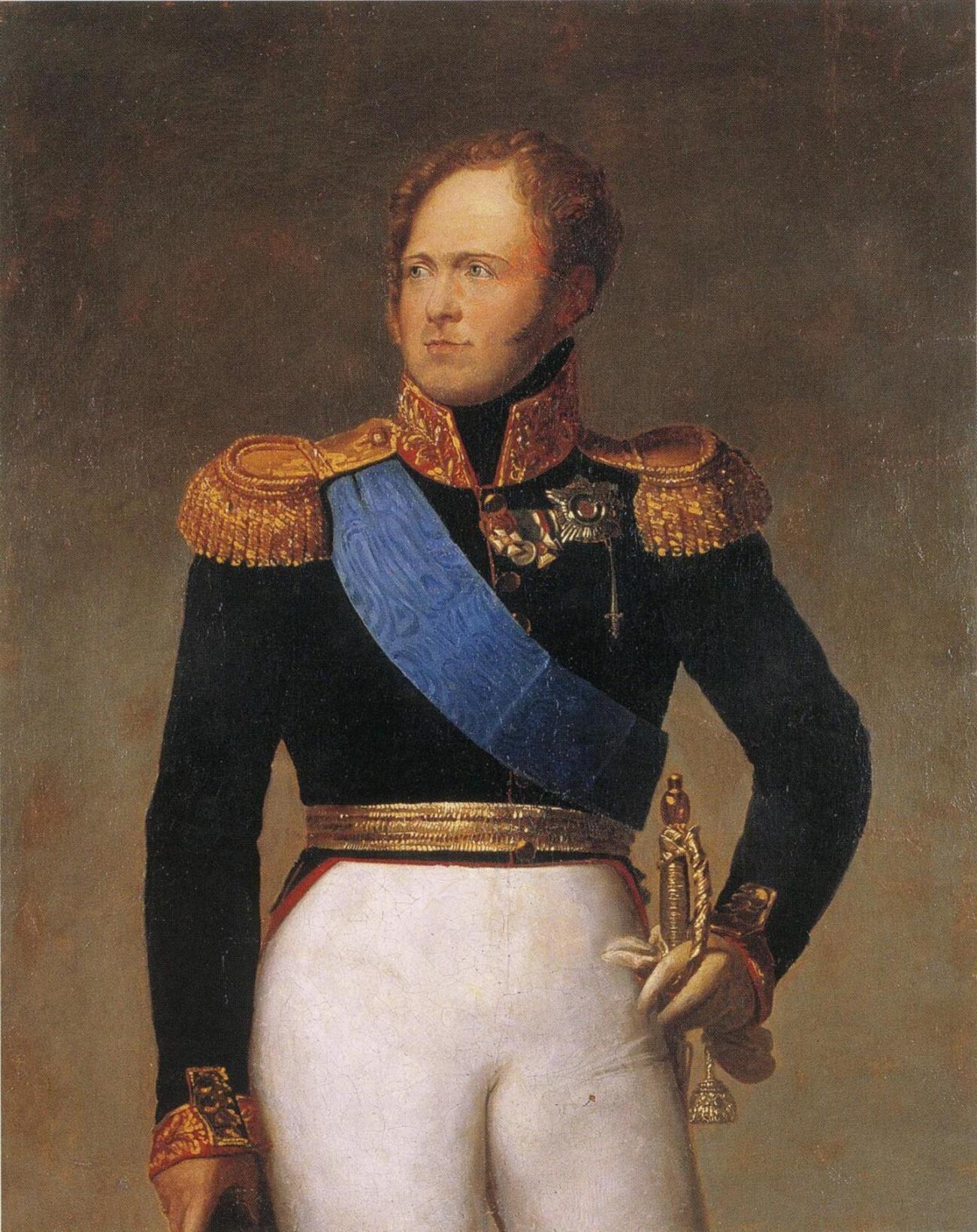 Emperor Alexander I of Russia.

After wandering through the courts of Austria and Britain, Charles-André entered the Russian service in 1804. He became a state councilor at the Collegium of Foreign Affairs and began to carry out diplomatic missions for Emperor Alexander I in Europe.

The defeat of the fourth anti-French coalition and the signing of the Tilsit Treaty between the Russian tsar and the French emperor on July 7, 1807, affected Pozzo di Borgo directly. Alexander refused to extradite him to Napoleon, however, the Corsican was spared from his duties.

Roaming between Vienna and Berlin, Charles-André nevertheless continued to inform the tsar unofficially of the state of affairs in Europe. Interestingly, in conversations with the local aristocracy who spoke deprecatingly of the “Corsican upstart”, he fiercely defended his rival: “What do these people know about Napoleon? If they knew as much about him as I know, they would feverishly shake with fear. How can these midgets compare themselves to a giant! They are ridiculous! They’re going to lose everything!” 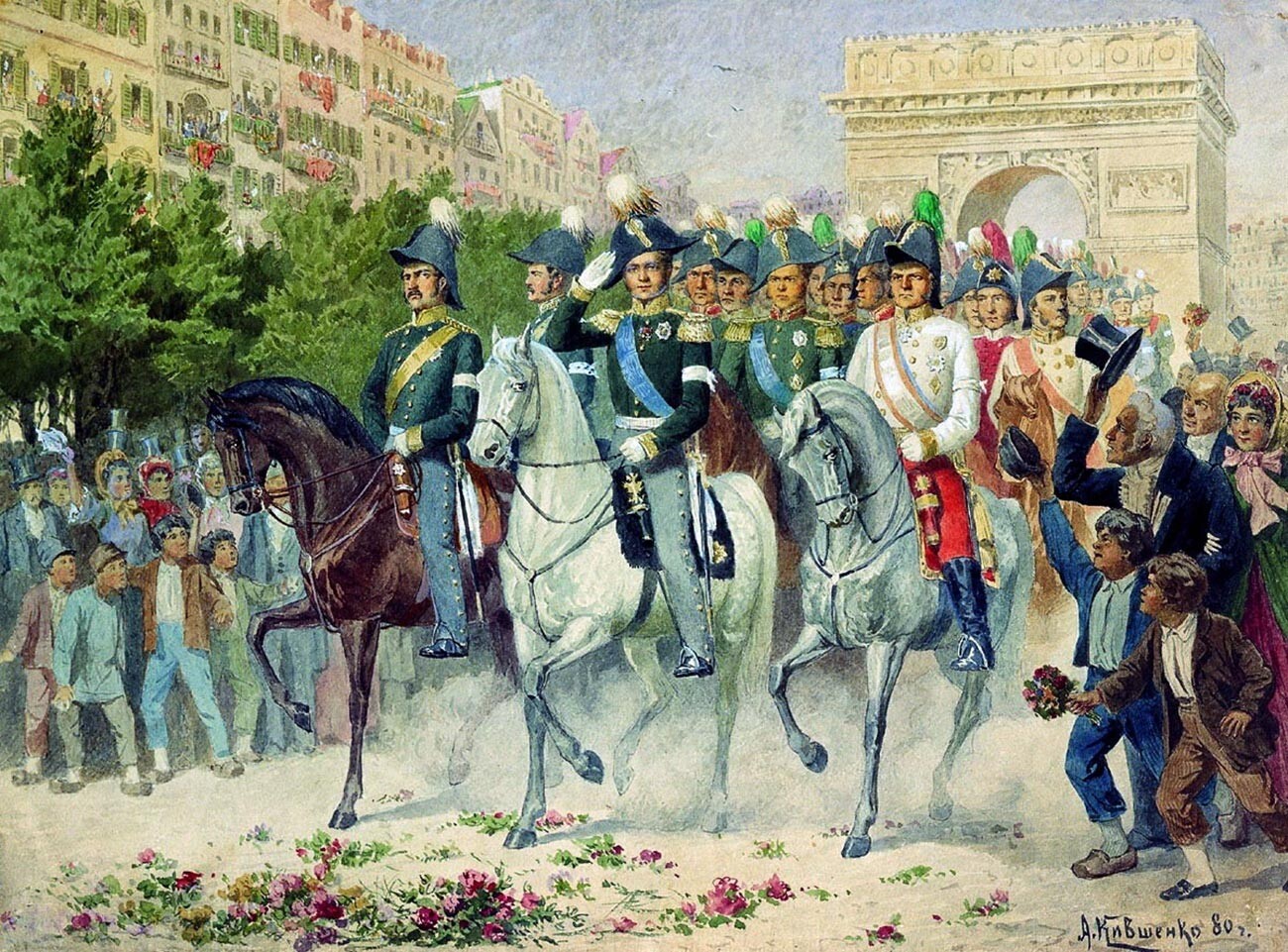 The invasion of Russia by ‘The Great Army’ and the outbreak of the Patriotic War of 1812 allowed Charles-André to return to the service of Alexander I. He took part in several battles against the French forces and also resumed carrying out the tsar’s diplomatic missions. For the successful involvement of Sweden in the anti-French coalition in July 1813, Pozzo di Borgo was promoted to major-general.

It was the Corsican who persuaded the wavering Allies in the spring of 1814 to march swiftly into Paris, which, in the end, crossed out all Napoleon’s military plans and accelerated his fall. “The goal of the war is Paris. As long as you keep thinking in terms of battles, you run the risk of being defeated, because Napoleon will always fight a battle better than you… You must aim to end the war not militarily, but politically… Touch Paris with just a finger and the colossus of Napoleon will be destroyed, you will break his sword, which you were unable to seize,” said Charles-André.

Largely due to the efforts of Charles-André Pozzo di Borgo, the Bourbons returned to the French throne. He was able to convince the king, who had a low opinion of the dynasty, that this was the only way to avoid civil war in the country. It was the Corsican authorized by the Allies who brought Louis of Provence (the future Louis XVIII) an offer of the crown of France. 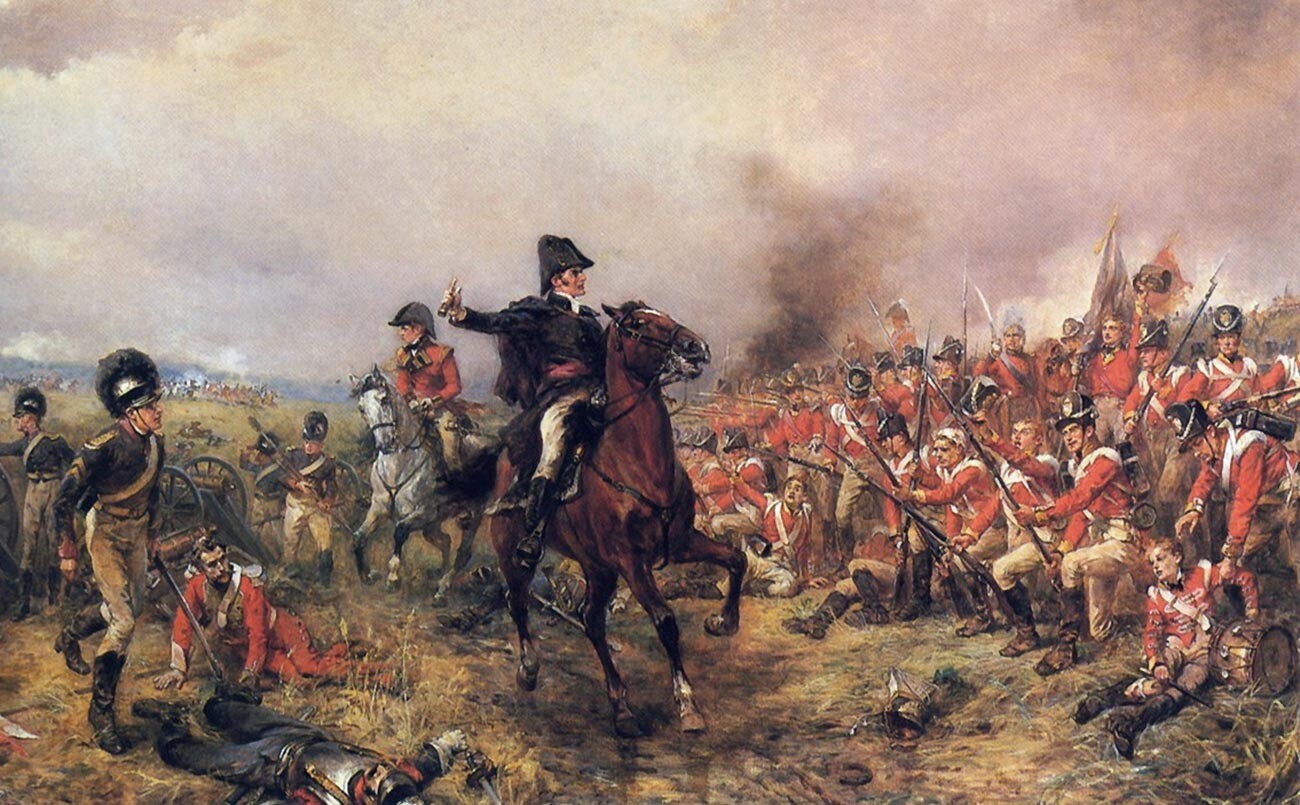 After Napoleon’s triumphant return to power in 1815, Pozzo di Borgo served in the armies of the Duke of Wellington, where he represented the Russian tsar. He took part in the battle of Waterloo, during which he was wounded. Legend has it that during the battle the two enemies even looked at each other through spy glasses.

After the war, Charles-André served for many years as Alexander I’s special envoy to the court of Louis and, as for Bonaparte once, France became a home to him. Due to his efforts, the French avoided major territorial losses and the occupation forces were soon withdrawn.

The diplomat did everything in his power to bring France back into the system of European relations and to ensure that her connection with Russia would never weaken. He had a truly great influence. Both Alexander I (and, after him, Nicholas I) and the French monarchs listened to his opinion. Parisians even joked that they were still ruled by a Corsican. 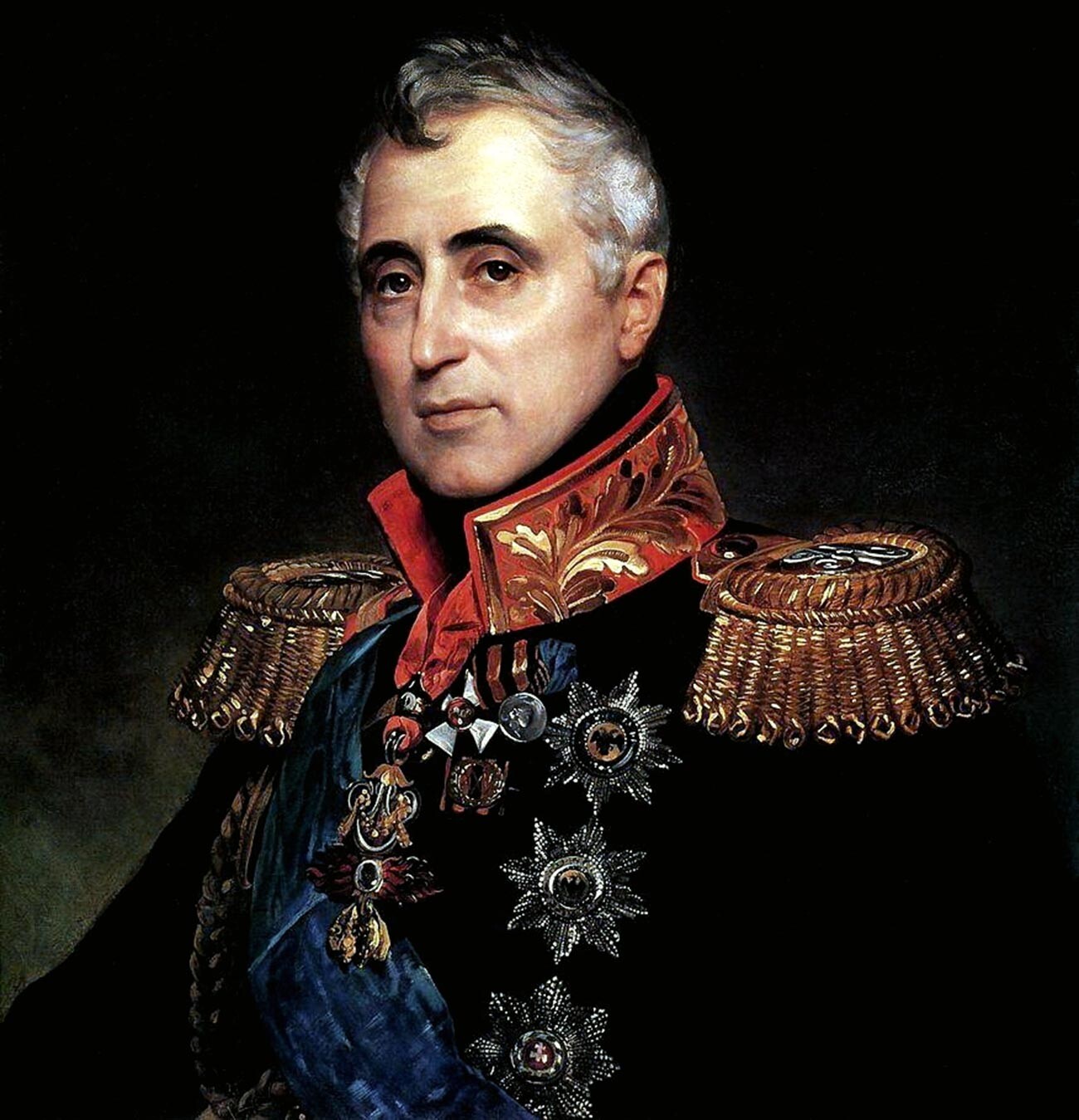 Pozzo di Borgo died in 1842, having outlived Napoleon by more than twenty years. Considering his cousin his main enemy, he still always paid tribute to his genius. As early as 1831, Charles-André told his nephew Carlo Pozzo, “Like most other people, I will be just a minor planet revolving around the big sun, whether it is life-giving or world-burning.”