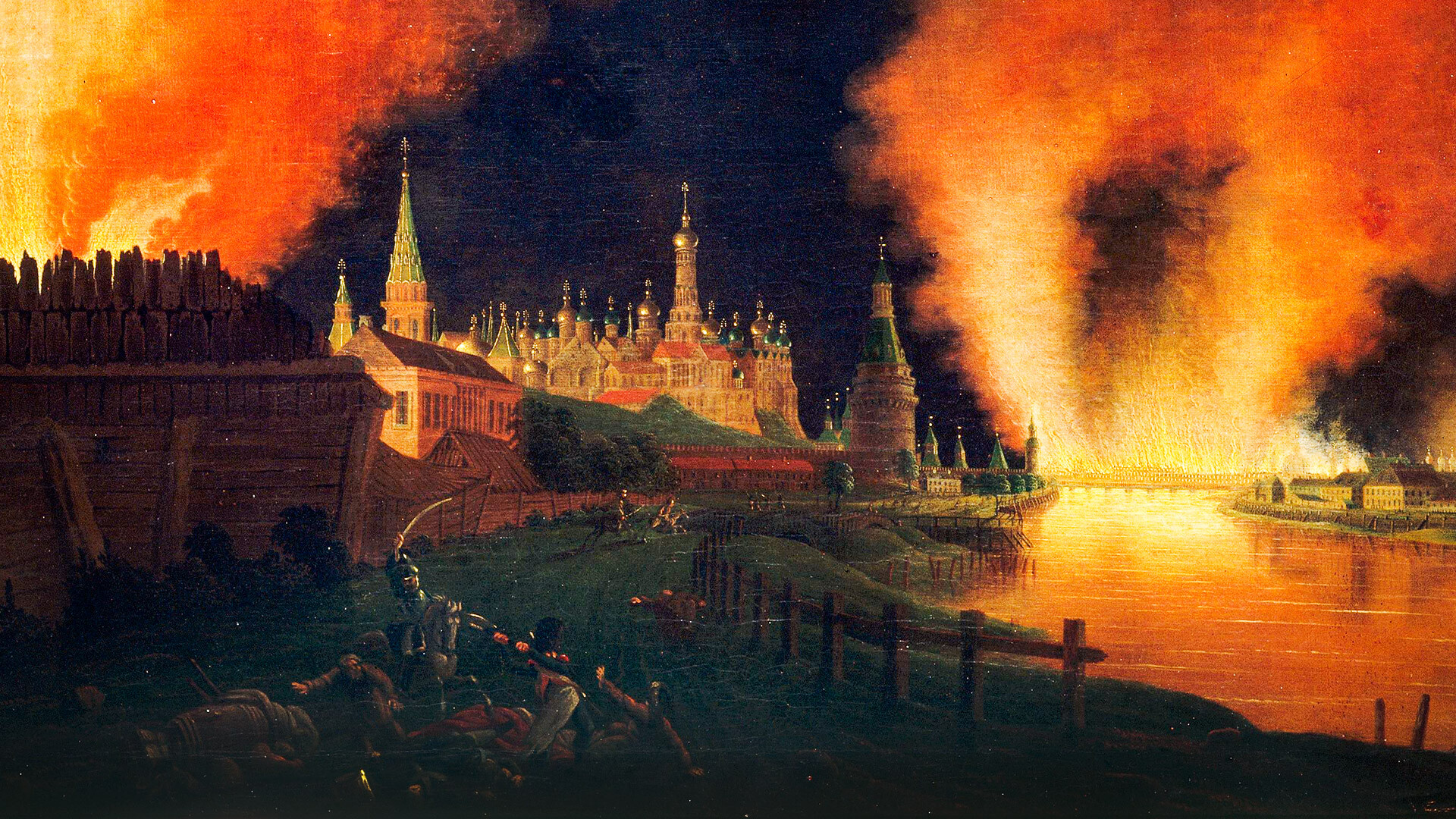 The Fire of Moscow in September 1812.

Christian Johann Oldendorp
The Russians believed that Napoleon's troops destroyed the city. However, the French themselves were convinced that it was burned down by the local residents. Who was really to blame for the tragedy?

"It was a sea of fire, the sky and clouds seemed ablaze, with mountains of red swirling flames, like huge sea waves, suddenly surging up, rising to the blazing sky and then falling into the fiery ocean. Oh, it was the most magnificent and frightening sight mankind had ever seen," was how Napoleon Bonaparte described the vast fire which engulfed Moscow on Sept. 14, 1812, on the very day the Grande Armée occupied the ancient capital of Russia.

The fire destroyed six out of the city's nine thousand houses, almost half of its churches, the university with its unique archives, and grand houses with their collections of priceless works of art. Also, over two thousand gravely wounded soldiers of the Russian army perished in the fire - according to the custom of the time, they were left in the care of the enemy due to the impossibility of evacuating them.

The fire raged for five days and, in some places, it was still smoldering when the French left the city at the end of October. Both sides immediately blamed each other for this act of barbarity, but who was the real culprit? 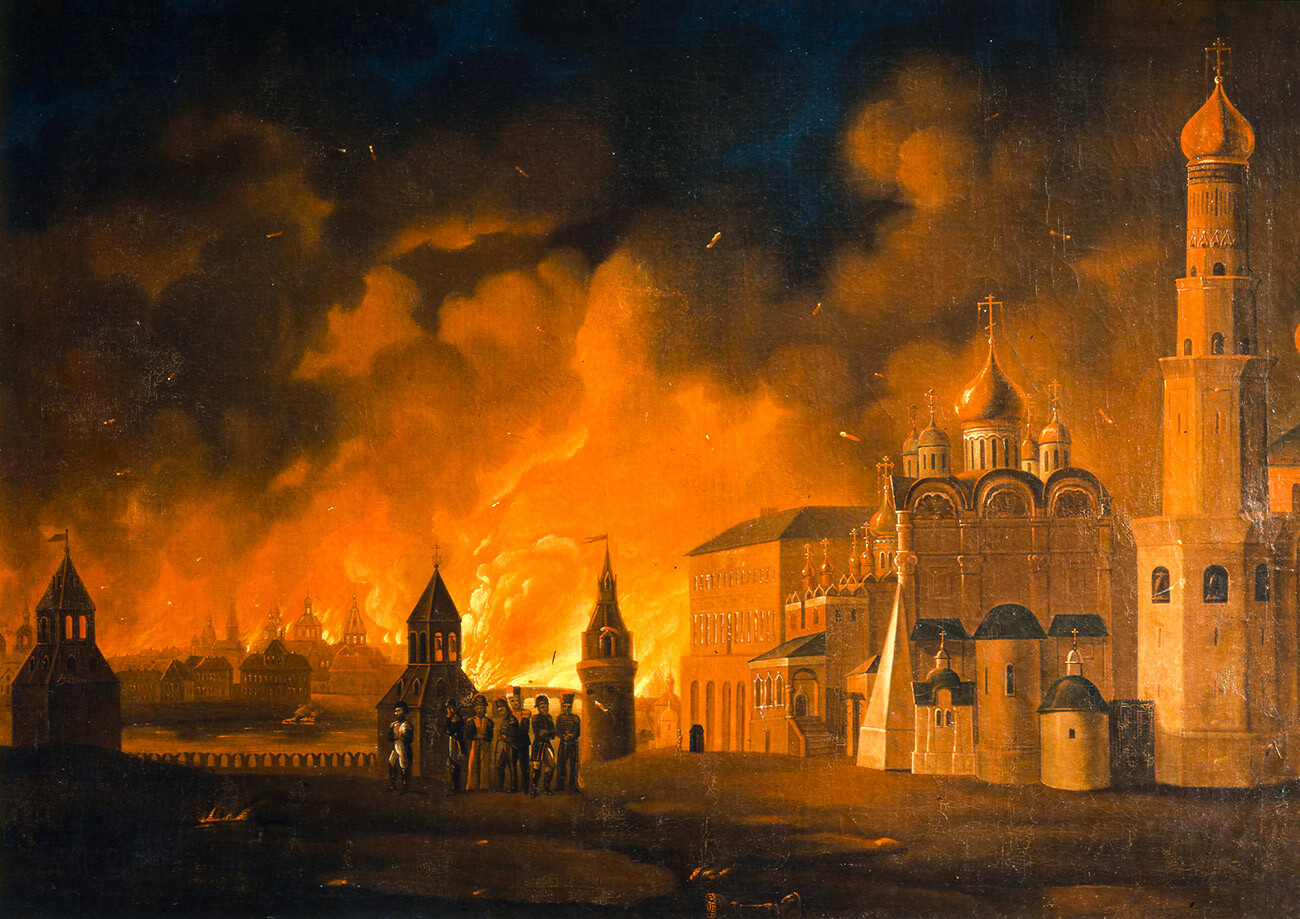 "Fires are breaking out in the city all the time and it is now clear that their causes are not accidental," recalled Grande Armée officer Cesare De Laugier: "It appears that the arsonists have been acting on the orders of Rostopchin and police chief Ivashkin. The majority of those arrested turn out to be police agents, Cossacks in disguise, convicts, officials and seminarists… Those captured at the scene are immediately executed."

The French named Moscow Governor-General Fyodor Rostopchin as the main culprit responsible for the disaster. Philippe-Paul de Ségur, who was in Napoleon's entourage, wrote that a huge number of rockets and other incendiary devices had been made on Rostopchin's orders: "Moscow was supposed to be turned into a huge infernal machine, the sudden explosion of which at night would swallow the Emperor and his army."

True, the city's governor often expressed the melodramatic sentiment that he would rather destroy Moscow than give it to the enemy. He had written in a letter to Prince Pyotr Bagration in August that, if the enemy came, the people would "turn the city to ashes and, instead of booty, Napoleon would get the site where the capital used to stand (i.e. the ancient capital, as the capital of the Russian Empire at the time was St. Petersburg - Russia Beyond). It would be good to let him know that too, so that he shouldn't expect to get his hands on millions here, or find warehouses full of bread, as he would find only charcoal and ashes instead." 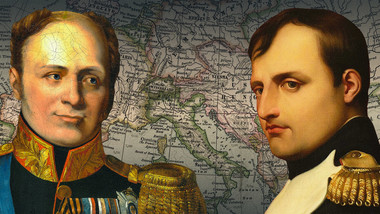 What actually caused the Russo-French War of 1812?

Rostopchin demonstratively burned down Voronovo, his estate near Moscow, and, at the last moment, issued orders for food warehouses to be set on fire "as far as feasible in sight of the enemy" (by and large, the French put out these pockets of fire straight away). As regards the complete annihilation of the city, however, the governor-general could only embark on such a move on direct orders from the Russian Army's commander-in-chief, Mikhail Kutuzov, or Emperor Alexander I himself. However, no documents with instructions to this effect, or reports from those who might have carried them out, exist.

The Moscow police did not have the time or the opportunity for any sabotage. Immediately after the Council in the village of Fili on September 13, at which point the command decided to abandon Moscow, Kutuzov asked Rostopchin "to send (him), with the same adjutant Montresor, as many police officers as possible, who could lead the army to the Ryazan road by different routes" - in other words, to withdraw the troops, which had the French literally snapping at their heels, through the city in a southeasterly direction.

Finally, Rostopchin was perfectly aware of the thousands of wounded Russian soldiers who remained in the city and for whom an all-out fire would mean certain death. And that is exactly what befell them in the end. 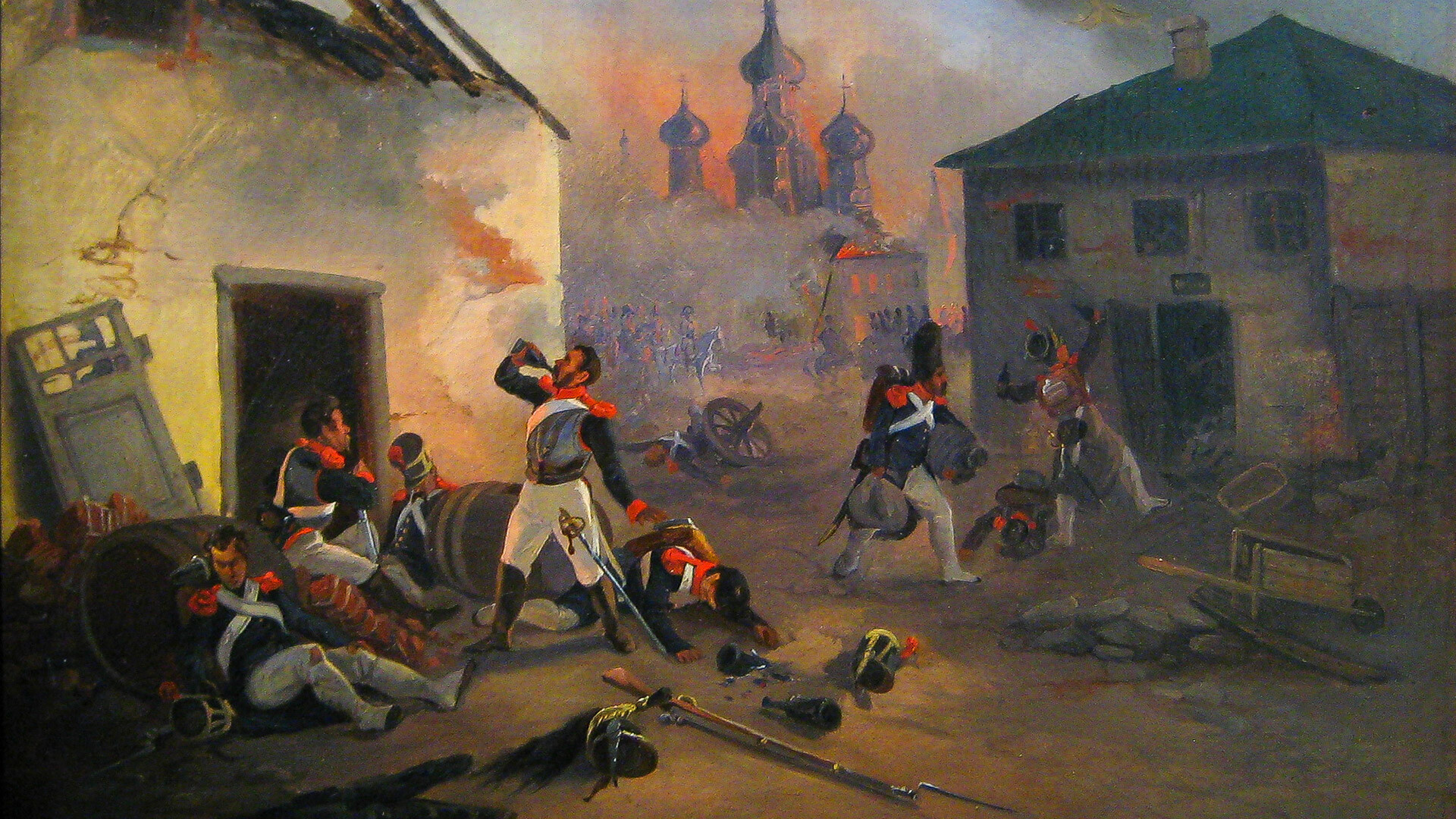 The Russian side, for its part, laid the blame for the Moscow disaster on the French. Government reports in October were already referring to them as "despicable arsonists", and to the acts of arson as the work of the "mentally deranged".

After the entry of the Russian army into the French capital in 1814, diplomat Semyon Vorontsov asserted: "We are seen as the barbarians, while the French are for some reason regarded as the most educated of nations. They burnt down Moscow, while we preserved Paris."

In a letter to Vorontsov, Rostopchin wrote that Napoleon "consigned the city to flames in order to acquire a pretext to plunder it"... In order to lay his own infamy at someone else's door, Bonaparte awarded me the title of arsonist, and many believe him," he remarked in another letter. 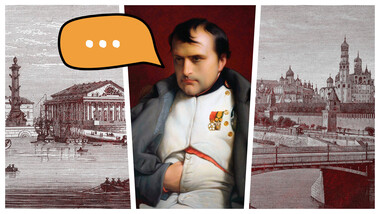 It made no sense, however, for the French Emperor to set fire to a city in which his numerous troops were billeted. Furthermore, he personally took part in efforts to put out the fires, and almost died in the flames himself.

It could be that the disaster was caused by unchecked looting on the part of soldiers of the Grande Armée. According to an account by one of the Frenchmen who had come to Moscow, "they abandoned themselves to pillaging and all sorts of violence; many paid for their avarice with their lives: More than 6,000 soldiers were suffocated by smoke in houses that caught fire after they entered them for the purpose of robbery."

Even before the French started to hunt down and shoot torch-brandishing "men with brutish faces, clothed with rags", the comte de Ségur was blaming his fellow-countrymen for the disaster: "It seemed to most people that the fire was caused by the drunkenness and unruliness of our soldiers, and that the strong wind merely fanned the flames. We looked at one another with a certain sense of revulsion. We were afraid of the outcry and outrage that were bound to sweep across the whole of Europe. We approached one another afraid of lifting our eyes, despondent at this terrible catastrophe: It tarnished our glory and threatened our existence both in the present and in the future; from now on we were an army of criminals that would be condemned by heaven and the whole of the civilized world." 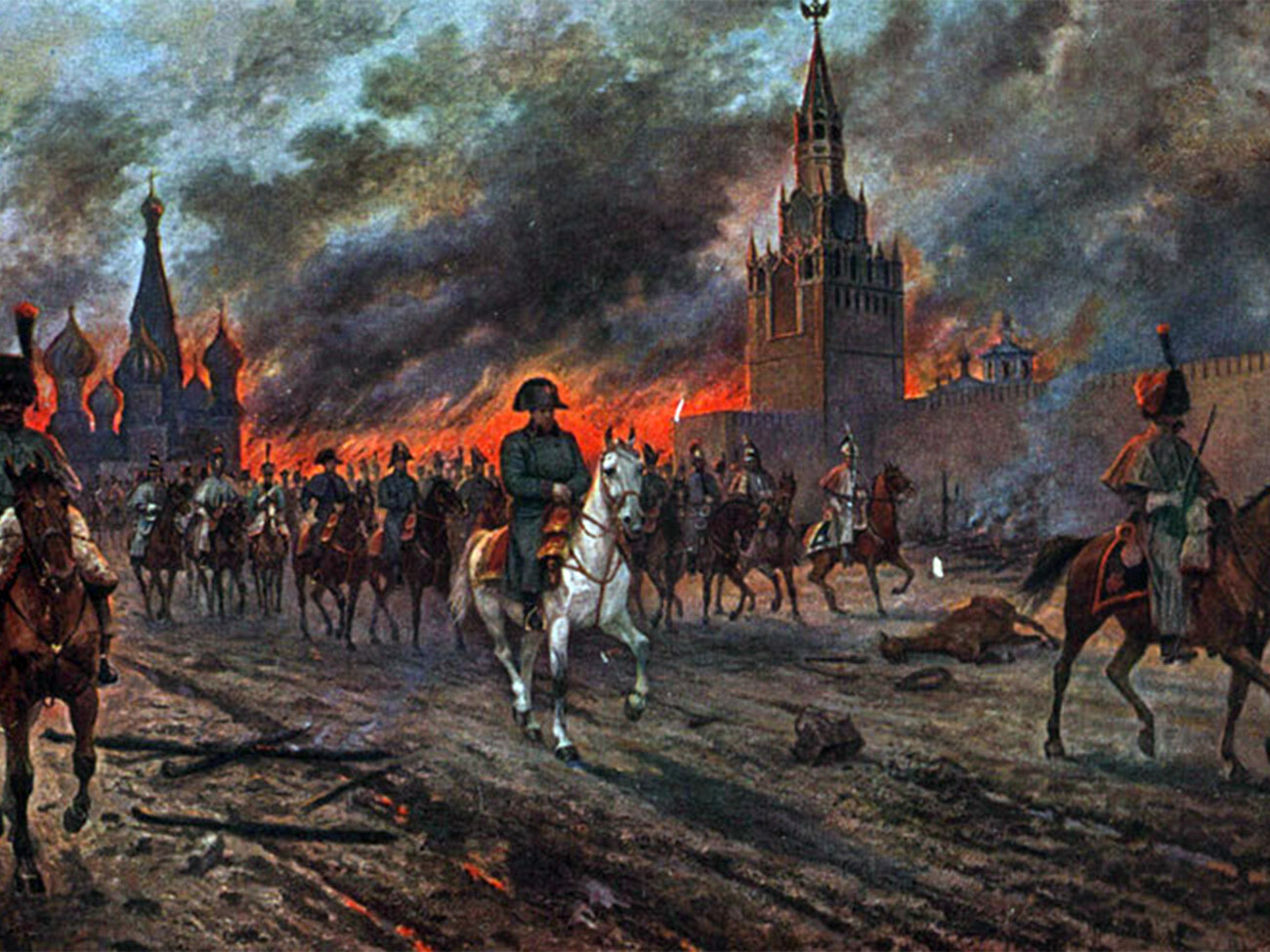 Contemporary eyewitness testimony is full of contradictory accounts of the degree to which one side or the other was to blame for the Moscow events. Even historians couldn't reach a consensus after arguing with one another for two centuries.

In recent years, however, historians have tended towards the hypothesis that the truth lies somewhere in the middle, and that both sides were to blame for the disastrous fire of Moscow in 1812.

Rostopchin was undoubtedly responsible in one way or another for the disaster that unfolded. It was on his orders that the warehouses were set ablaze and, even more importantly, all the fire-fighting units left the city. "The night-time fire could not be halted since there was no fire-fighting equipment to hand, and we did not know where to get hold of fire extinguishing pumps," recalled Gen. Armand de Caulaincourt. 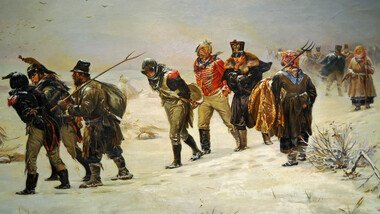 How Russia crushed Napoleon in 1812 (PICS)

Burning torches were brandished by both patriotically-minded townspeople and persons who had decided to take advantage of the general chaos for the purposes of looting and also to settle old scores. Russian army infiltrators entering the city in disguise could indeed have played a role, although they mainly started turning up in the city after the emergency had passed.

The actions of soldiers of the Grande Armée were a significant cause of the fires that broke out in numerous locations: against the background of a general collapse of discipline they subjected the city to wholesale pillage without the slightest regard for fire safety, sometimes deliberately setting fire to houses and shops. The strong wind caused the fire to spread around a city where, because of the exodus of a large number of townspeople and the absence of any single authority, it very rapidly became a destructive force.

Moscow suffered more than any other city of the Russian Empire in the course of the Patriotic War of 1812. Two decades were needed for the city to be fully restored. Although it is difficult today to pinpoint the main culprit behind the tragedy, one thing can be asserted for certain - both the Russians and the French could have done without it.