When did Russia have the largest number of French émigrés? 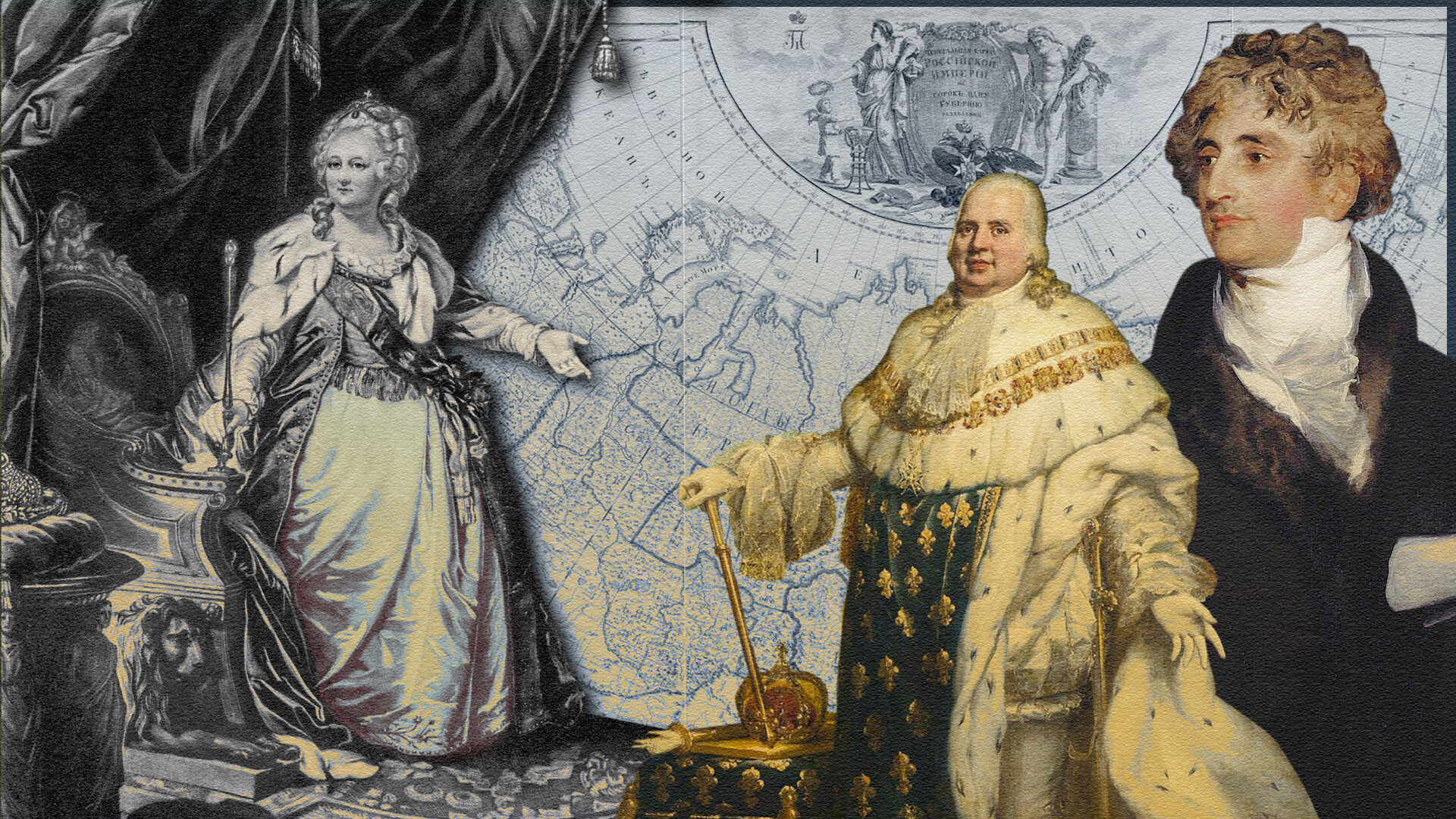 Russia Beyond (Photo: Mary Evans Picture Library/Global Look Press; The Royal Collection; Legion Media)
At the end of the 18th century, a joke was doing the rounds in Russia that any provincial landowner could afford to hire a French marquis as a tutor. And it was almost true.

The Great French Revolution of 1789 came as a blessing for some and a real curse for others in France. The faster the flywheel of terror spun, the greater was the number of people fleeing the country in search of safety. Wealthy aristocrats, their loyal servants, impoverished members of the nobility, clergymen and even some revolutionaries whom the mob had elevated to the pinnacle of power yesterday, but wanted to send to the guillotine today, all fled abroad.

In total, between 100,000 and 150,000 people left France during the revolutionary events of the final decade of the 18th century. The largest number (25,000) settled in Britain, while Russia unexpectedly found itself as the second most popular destination - about 15,000 French people found a temporary or permanent home there. What attracted them to what they believed was a cold and “barbaric” country?

Initially, the remote and little-known Russian Empire did scare off French émigrés and their numbers here were small. Over time, however, the fugitives began to appreciate all the advantages of life in the east of Europe. 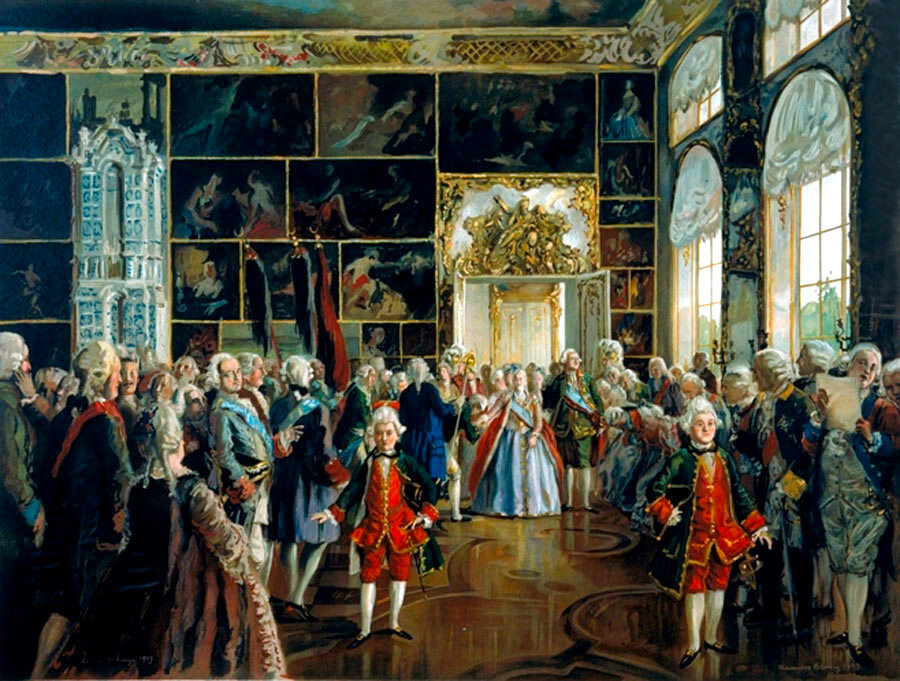 First of all, Russia was a long way away from the battlefields of the revolutionary wars and the émigrés, unless they wanted to engage in the fighting themselves, could live in its vast expanses in complete peace (at least until 1812).

France’s neighbors, especially the smaller German principalities, often worried about how the mighty Republic would react to the fact that they sheltered its hated enemies. At times, they created extremely difficult living conditions for their guests, trying to get rid of them as soon as possible. Russia, on the other hand, was absolutely indifferent to threats from France.

In the land of Empress Catherine the Great, opponents of the Revolution were warmly welcomed. “To all the French that I encounter, I preach affiliation on the basis of one principle: total loyalty to the King and the monarchy, that they should live and die by this principle and then I send them away, saying: ‘I shall be a friend and support to everyone who thinks this way’,” asserted the Russian ruler. 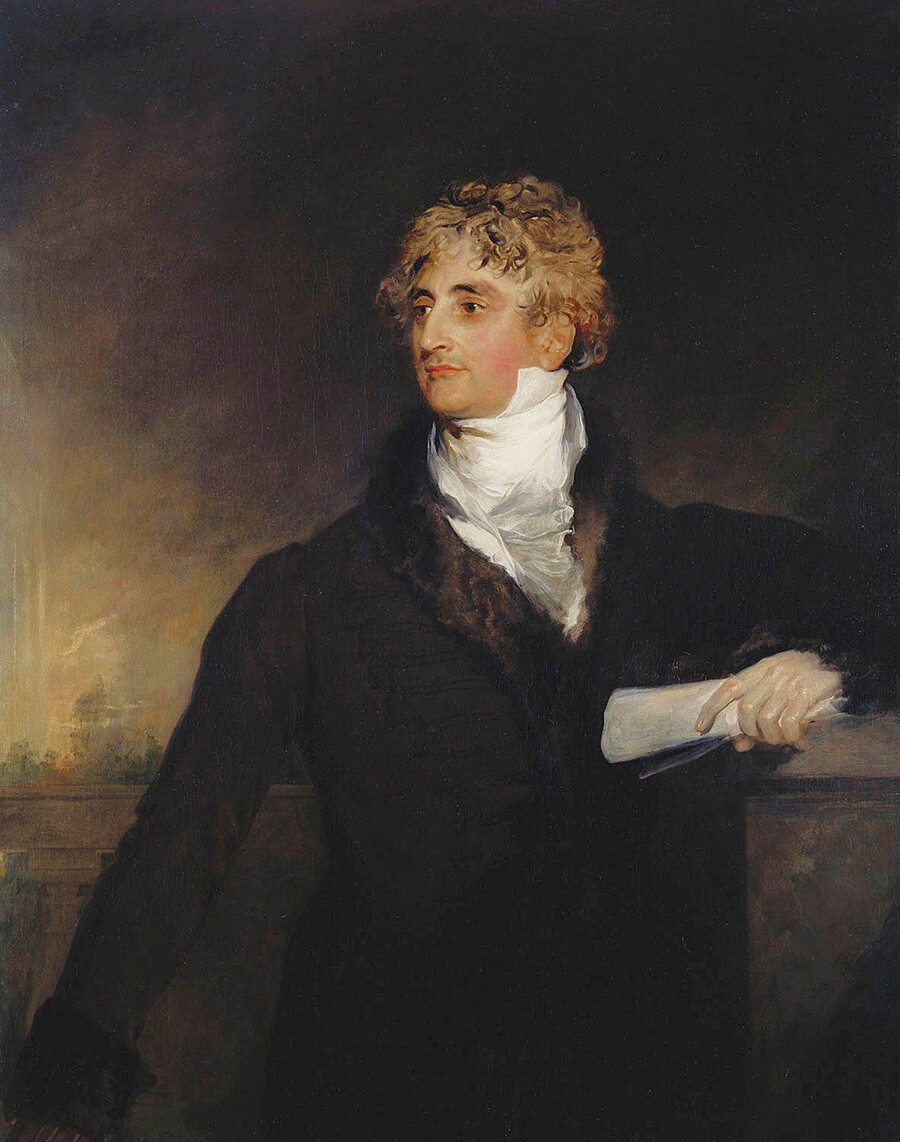 Of course, representatives of the highest French aristocracy felt the most comfortable in Russia. They could expect to occupy high positions in the civil service without any problems.

Thus, Armand-Emmanuel de Vignerot du Plessis, duc de Richelieu, himself a descendant of the famous Cardinal Richelieu, was appointed Governor of Odessa, as well as ruling Novorossiya (the Northern Black Sea region). Guillaume Emmanuel Guignard, vicomte de Saint-Priest, chose a career in the Russian army; he rose to the rank of lieutenant-general and was killed in the Battle of Reims, fighting against his former compatriots in 1814.

Certain French aristocrats were showered with privileges left, right and center. Immediately on his arrival in Russia in 1793, archeologist and diplomat Auguste, Comte de Choiseul-Gouffier was granted a large pension and promised the presidency of the Academy of Sciences, a post he did not take up only because he suddenly fell into Catherine II’s disfavor. Nevertheless, her successor, Paul I, elevated the Frenchman again, making him president of the Imperial Academy of Arts and owner of extensive estates in Lithuania.

The most important émigré of all 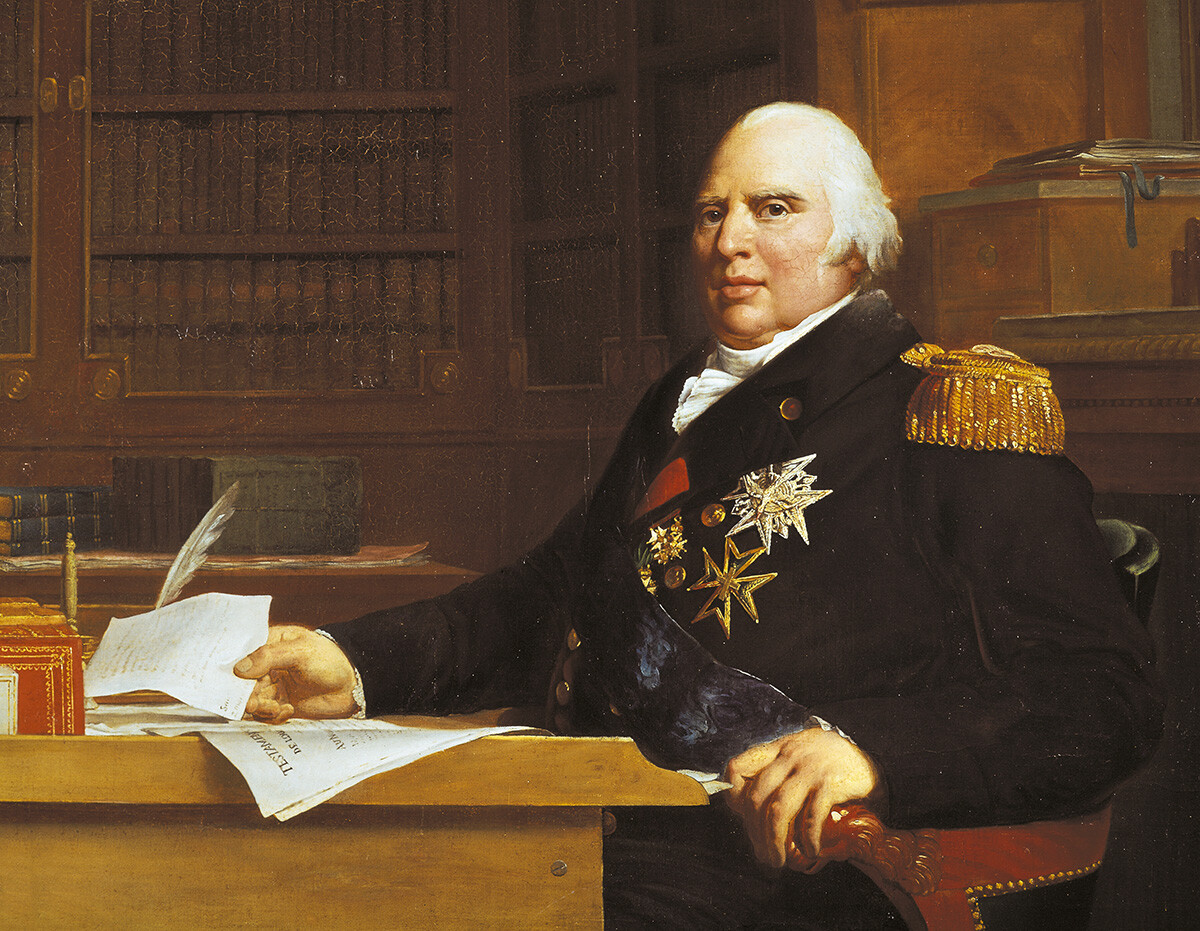 The most distinguished French émigré to settle in Russia was Count Louis Stanislas Xavier, who had been proclaimed King Louis XVIII of France in 1795. Persecuted by the French Republic with its hatred of the Bourbons, the king without a kingdom was forced to roam around Europe until, in 1798, Paul I granted him sanctuary.

The Emperor put a palace in Mitau (today’s Jelgava, in Latvia) at Louis’ disposal and also assigned for his personal guard 100 soldiers from the famous 7,000-strong royalist corps of Louis Joseph de Bourbon, Prince of Condé, who had also found refuge and financial support in Russia.

The French king’s tranquil existence in his “mini-Versailles” came to an end in 1800, when Paul I, disillusioned with his British and Austrian allies, drastically altered the direction of his foreign policy and began to seek a rapprochement with Napoleonic France. On January 19, 1801, Louis received an instruction from the emperor to leave the country immediately. 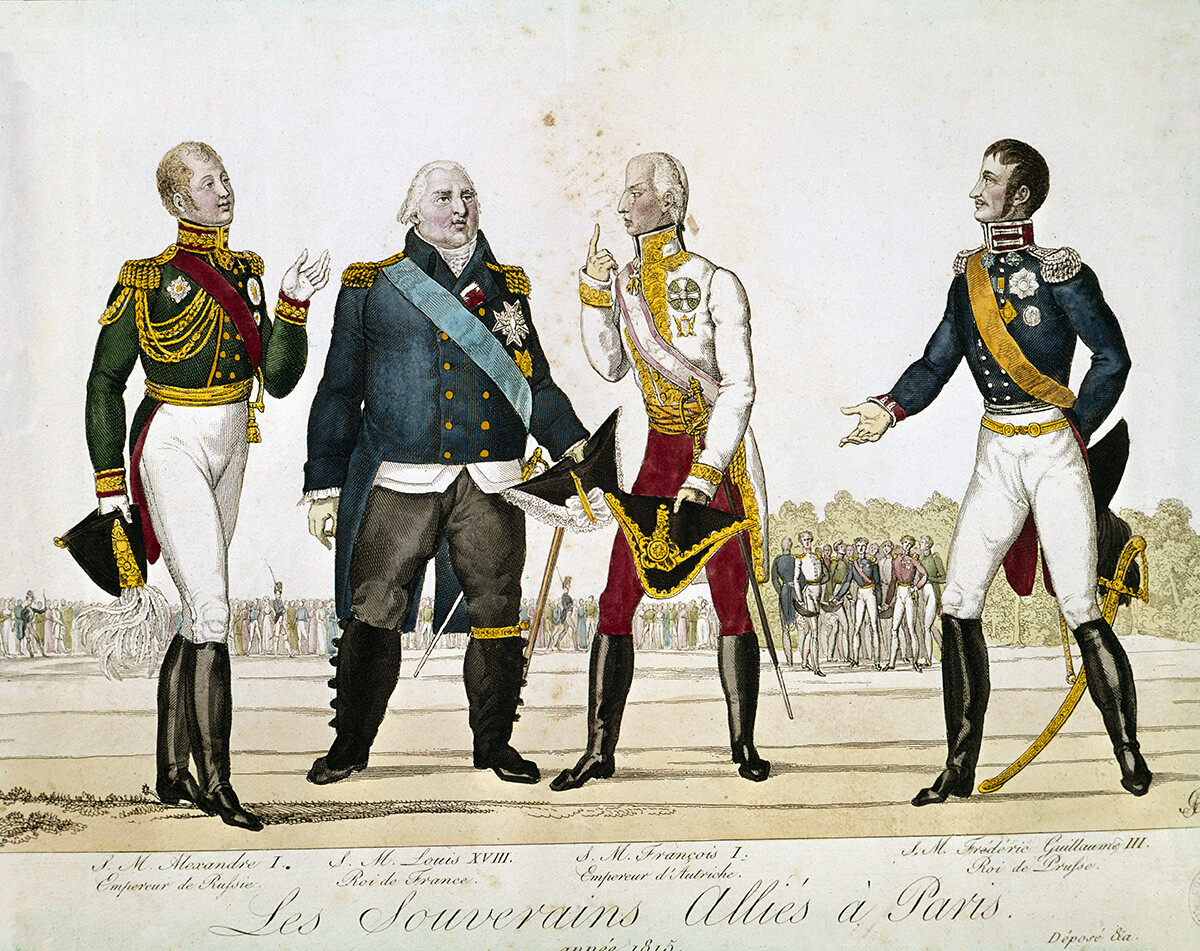 Alexander I of Russia, Louis XVIII of France, Francis I of Austria and Frederick William III of Prussia, 1815, coloured engraving.

The exiled king only returned to Russia in 1804 at the invitation of the new emperor, Alexander I, who had again set the country on a path of confrontation with the “Corsican Ogre”. History repeated itself in the same unpleasant way, however. The Fourth Anti-French Coalition collapsed in 1807 and Alexander and Napoleon signed the Treaty of Tilsit (in the town today known as Sovetsk in Kaliningrad Region).

“The friendly relations between the two recent adversaries that emerged after the Treaty of Tilsit prompted the downhearted Louis XVIII to leave Russia again - only, this time, it was not forcibly, but quite voluntarily,” wrote Ambroise-Polycarpe, Vicomte de La Rochefoucauld, one of the king’s confidants.

Obviously, not all French émigrés to Russia at the end of the 18th century were scions of ancient aristocratic houses. The vast majority of those who found refuge in the empire possessed neither wealth, nor connections, nor sponsors in high places. 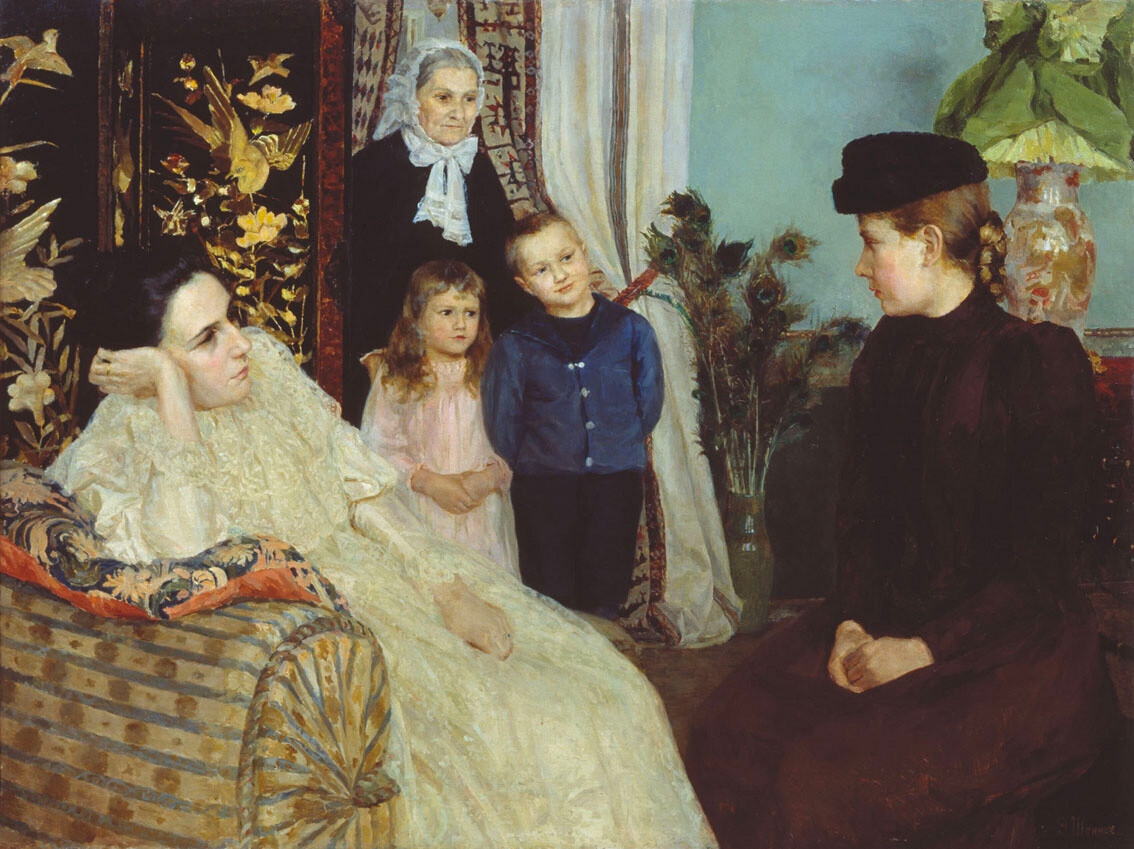 Unable to find a place for themselves in Europe, members of the French nobility went to Russia, where they were forced to work as doctors, librarians, craftsmen, modistes and dancing masters among other professions. A good solution was to become a tutor in a family. According to a joke doing the rounds in Russian society at the time, any impoverished landowner even in the remotest backwoods could now easily acquire a marquis.

Following the defeat of Napoleon and the restoration of the Bourbons to the French throne in 1814, the French émigrés largely returned home. Nevertheless, there were also some who decided to remain permanently in a country they had grown to like. Their descendants faithfully and loyally served the Russian Empire until its collapse in 1917.