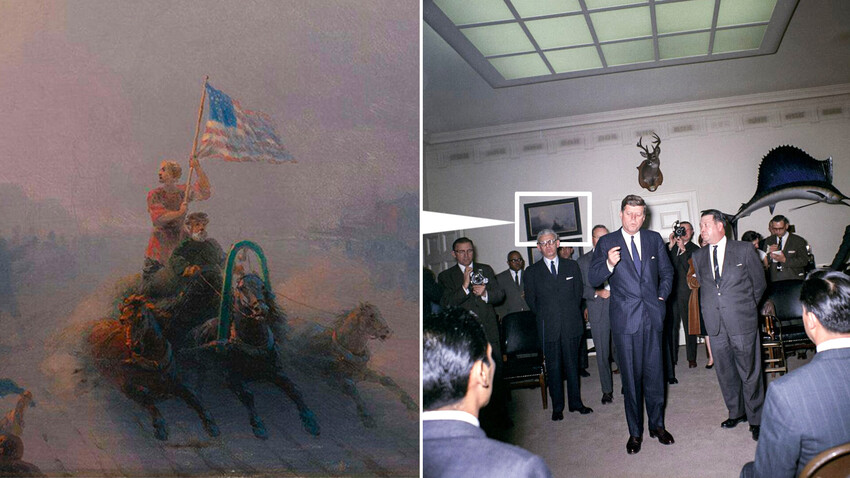 Robert Knudsen. White House Photographs. John F. Kennedy Presidential Library and Museum; Corcoran Gallery
Some say the two paintings by the famous Russian artist have been banned in Russia since the time of Alexander III until now.

In 1963, during the Presidency of John F. Kennedy, two paintings hung on the wall of the Roosevelt Room. One depicted a ship on the coast of the Russian Empire, the other – a Russian peasant waving the American flag. Rumors had it that the paintings by artist Ivan Aivazovsky were banned in Russia in an attempt to erase a dark page of the country’s history.

The first picture depicts an American ship docking in a Russian port in the Baltic Sea. A crowd of people waves to greet the American sailors. 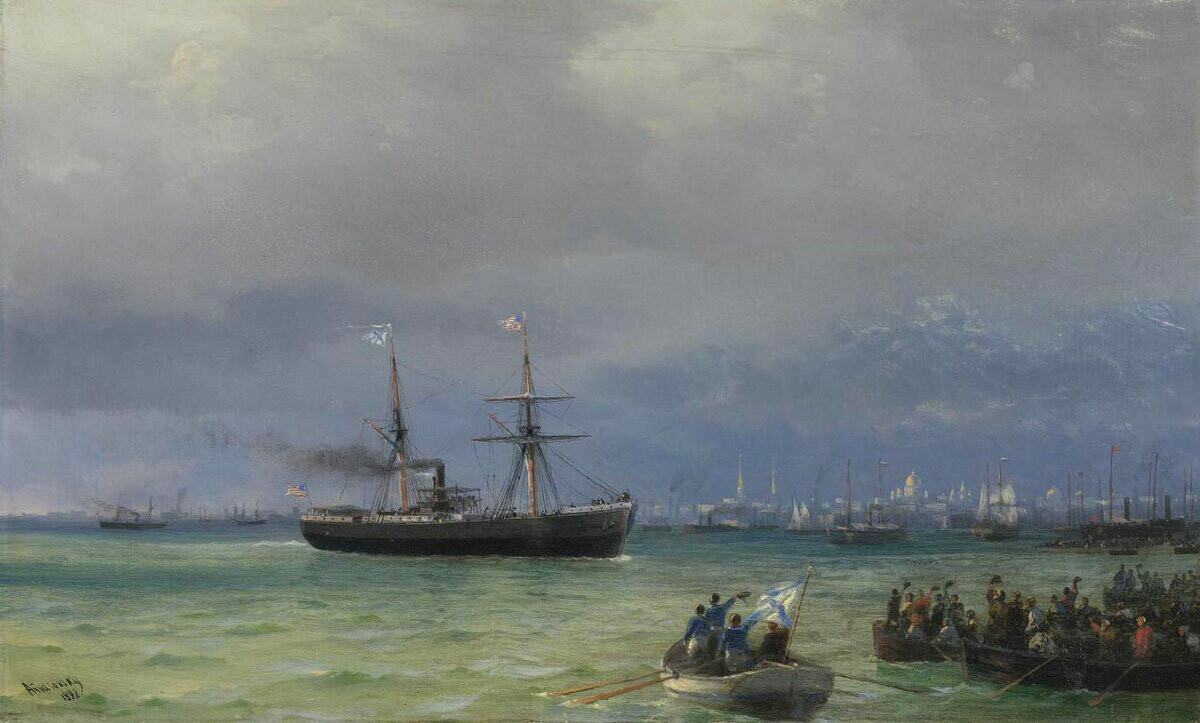 The second painting depicts a Russian troika, a traditional harness combination of three horses abreast pulling a sleigh. There are two men in the carriage. One person directs the horses while the other waves the American flag to a crowd of observers waving from both sides of the road. Russian flags are seen on one of the wooden houses built along the road. 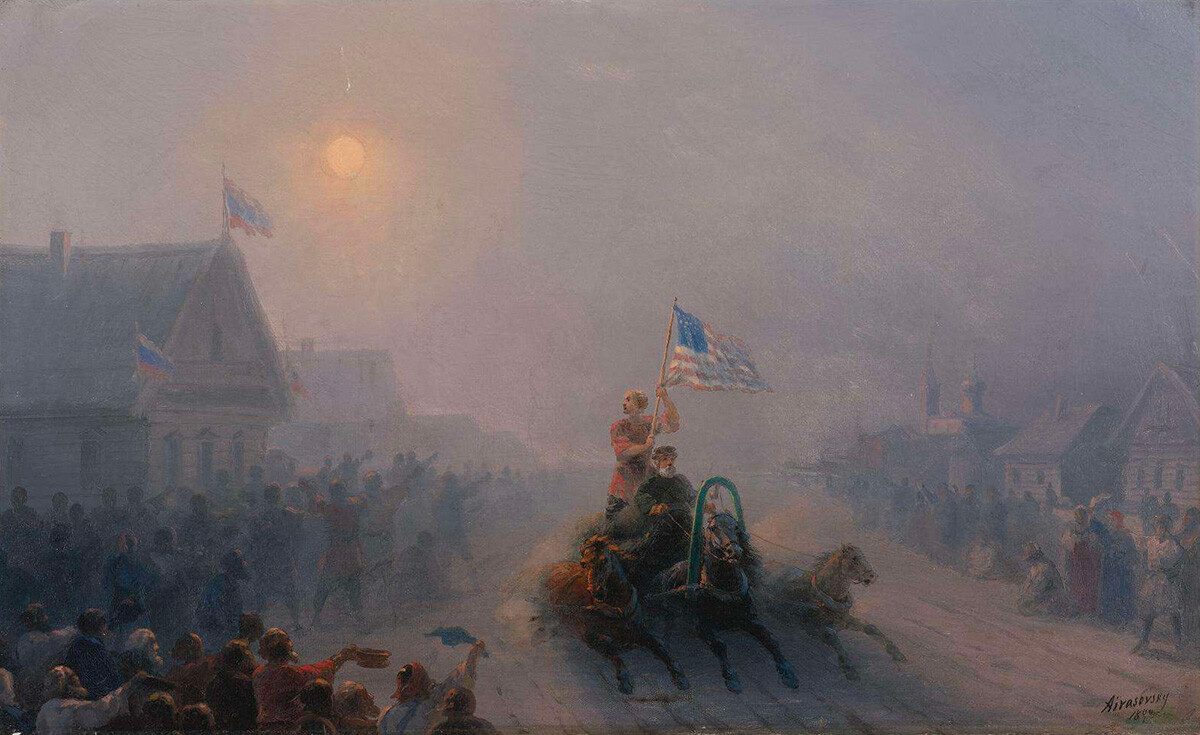 Together, the canvases document a dark moment in Russian history. Shaken by the suffering of the poor Russian people from the famine that engulfed the country between 1891 and 1892, Aivazovsky was also deeply touched by the private efforts of some Americans who sent humanitarian aid to the Russian Empire in an attempt to alleviate the suffering of people in the far away country.

The road to the White House

In 1892, Ivan Aivazovsky made a trip to the United States. By that time, he had already risen to prominence as a recognized artist in his native Russian Empire and abroad.

During his stay in the U.S., Aivazovsky held a personal exhibition In New York. The artist exhibited 24 canvases. Among them were the two above-mentioned paintings, named ‘The Relief Ship’ (also known as ‘The Help Ship’) and ‘Distributing supplies’, respectively. 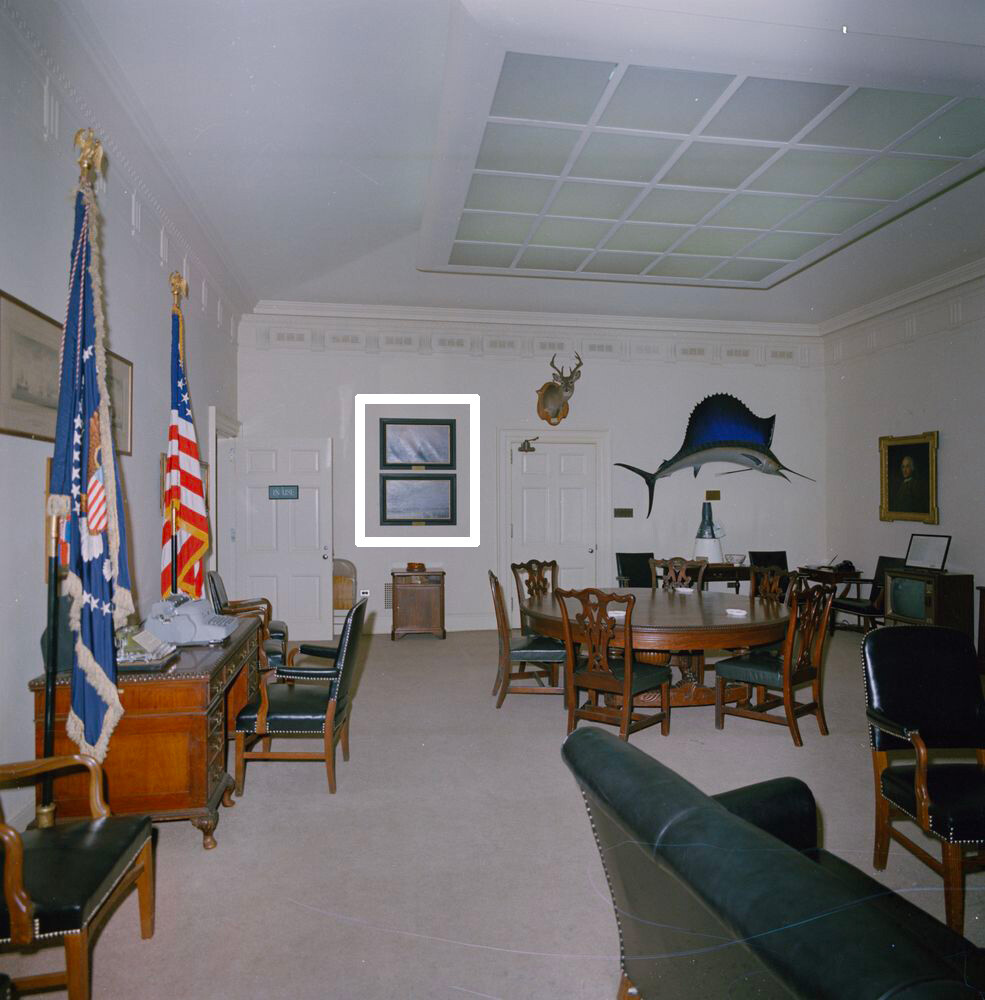 Known for his generous nature, Aivazovsky often presented his paintings as gifts. ‘The Relief Ship’ and ‘Distributing supplies’ went to the Corcoran Gallery of Art in Washington. 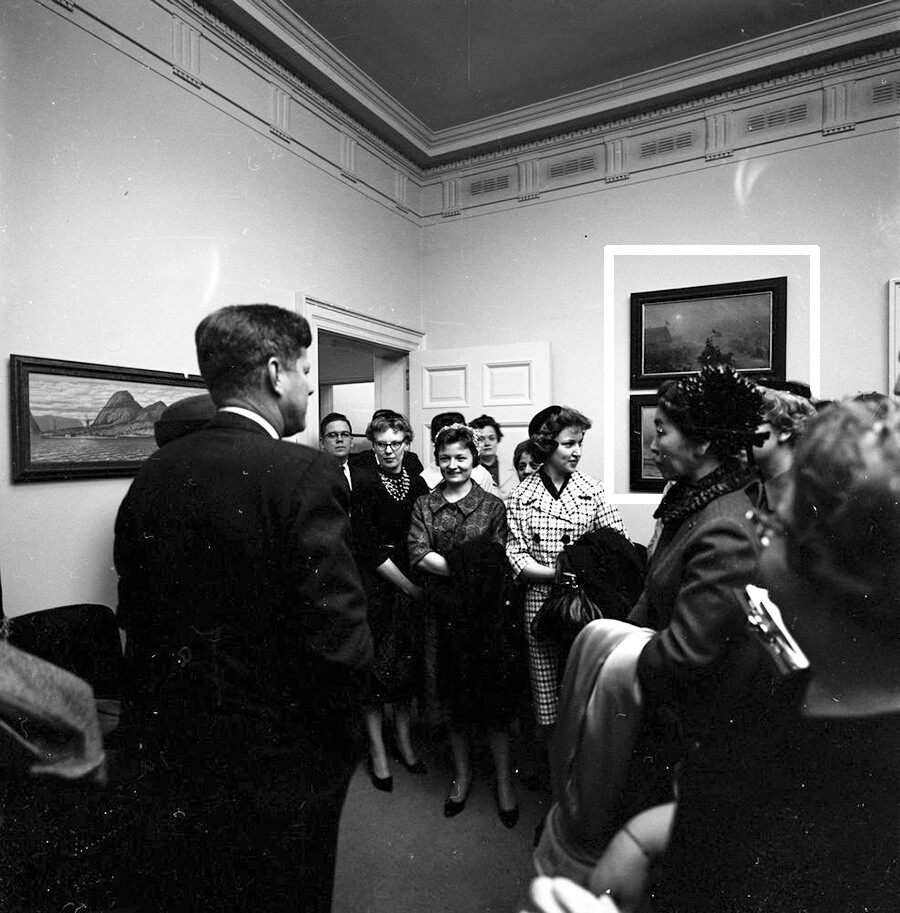 When JFK became president in 1961, the canvases moved to the White House at the initiative of Jacqueline Kennedy. 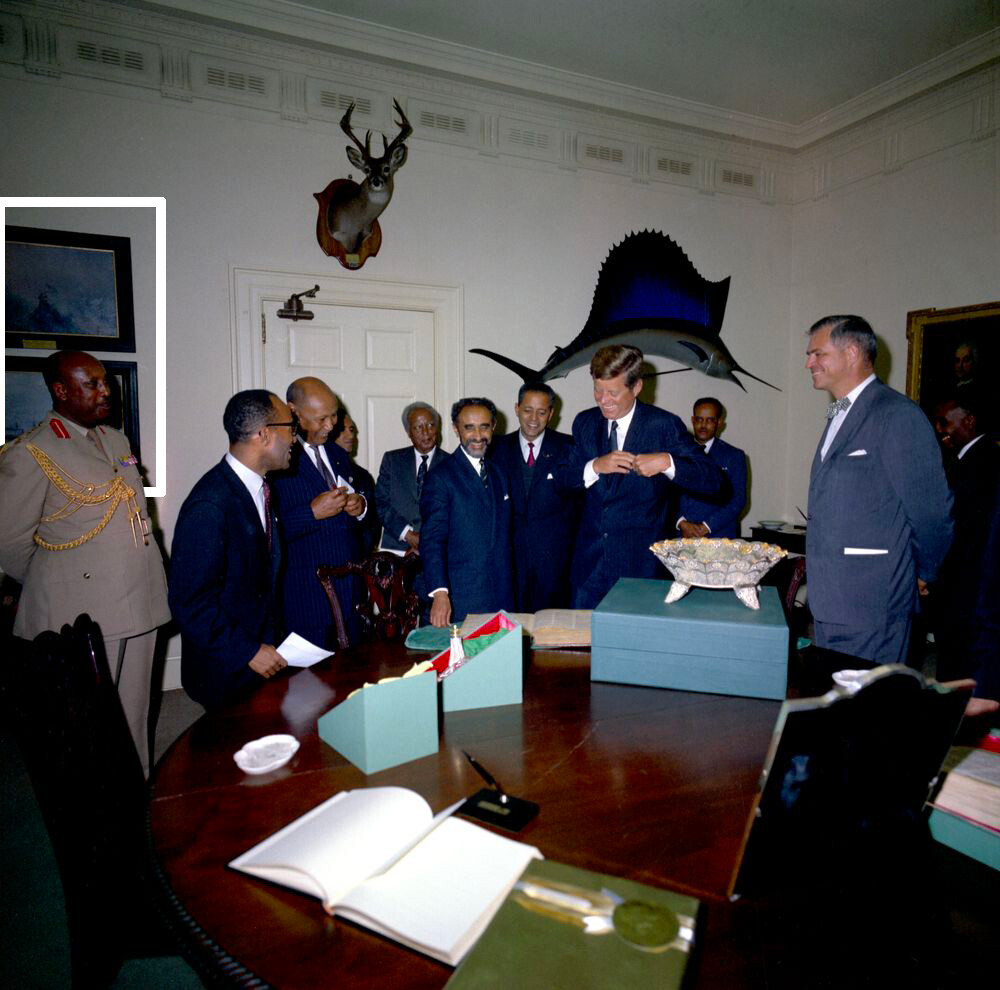 President John F. Kennedy laughs with Emperor of Ethiopia, Haile Selassie I, during an exchange of gifts in the Fish Room of the White House.

The paintings disappeared from public view in 1979, as they somehow ended up in a private collection, but resurfaced in 2008 at the Sotheby auction. There, they were sold for $2.4 million to a philanthropist who transferred them back to the Corcoran Gallery in Washington.

Learning about famine in Russia that quickly spread on the territory between the Urals and the Black Sea and the government’s inadequate measures to stop the hunger, private individuals in the U.S. formed the so-called ‘Russian Famine Relief Committee of the United States’.

Not endorsed by the U.S. government, the charity organization was mostly self-funded by private donations under the leadership of William Edgar, the editor of the North Western Miller weekly. 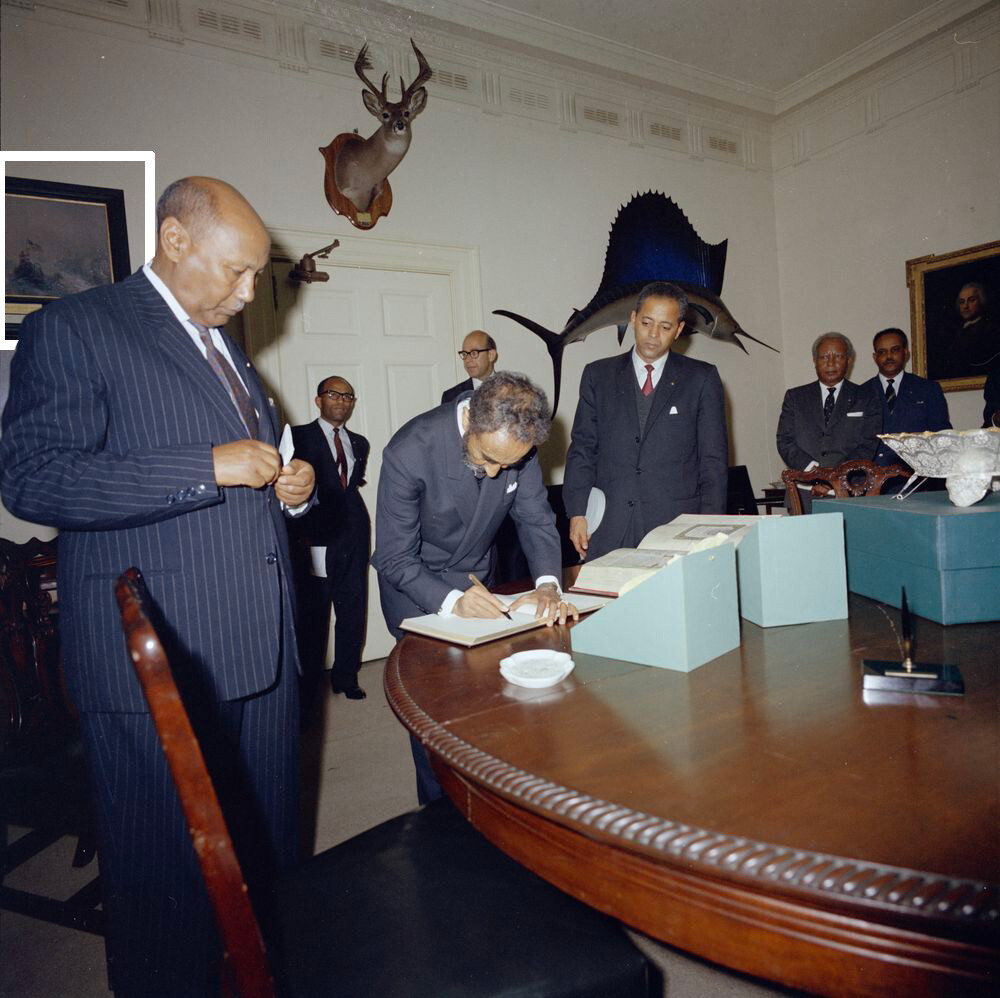 Emperor of Ethiopia, Haile Selassie I, writes in a book during an exchange of gifts with President John F. Kennedy (not pictured) in the Fish Room of the White House.

On March 16, 1892, the first ship carrying American humanitarian aid – food, grain and corn flour – arrived in a Russian port in the Baltic Sea. Soon, other ships followed. From the beginning of Spring to the middle of Summer 1892, five ships carrying some $1 million worth of food amounting to some 10,000 tons arrived in Russia. 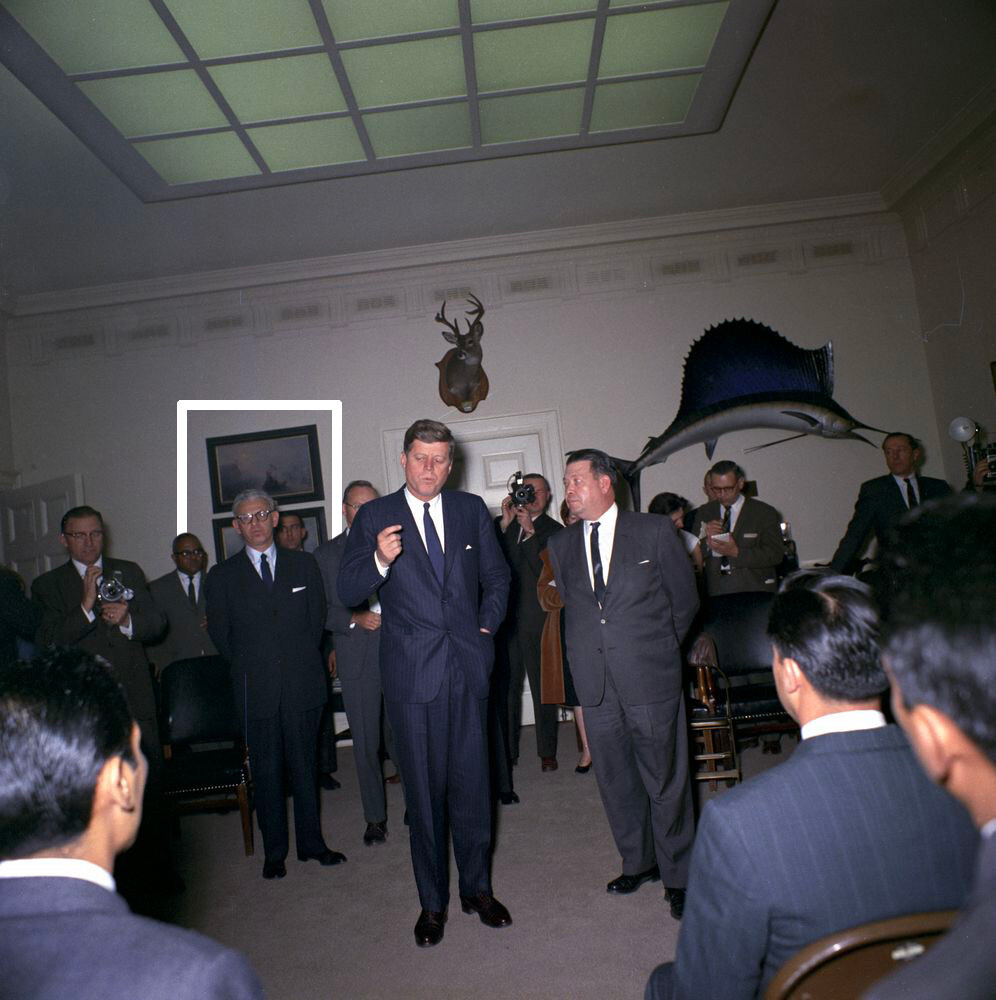 “We are all deeply touched by the fact that ships full of food come to us from America,” said future emperor Nicholas II, who coordinated the relief efforts at the time.

However, his father, emperor Alexander III is said to have not appreciated the gesture, because it inadvertently questioned his ability to mitigate the domestic crisis. As the famine spread causing great suffering for Russian peasants, it also exposed the inadequacy of social organization in the Russian Empire – characterized by a wide gap between the rich and the poor – and the inability of the tsarist government to decisively address the pressing issue.

When the first U.S. ships with food arrived in Russia, Aivazovsky was inspired by the generous gesture of common Americans. He then created two paintings documenting the arrival of the first ship to a Russian port and the process of distribution of food from the U.S. in the Russian Empire.

Some sources say that since the whole story had the potential to undermine the image and legacy of Russian Emperor Alexander III, the paintings were banned from being displayed in Russia. Although there was never a written decree banning these two paintings in the Russian Empire, some sources go as far as to claim the canvases have been banned in Russia since the era of Alexander III up until now.

There is no evidence to support the claim but it’s worth mentioning that the two paintings have never been publicly displayed in the Russian Empire, the USSR, or modern Russia.

Click here to find out how Russia helped the United States during the Civil War.