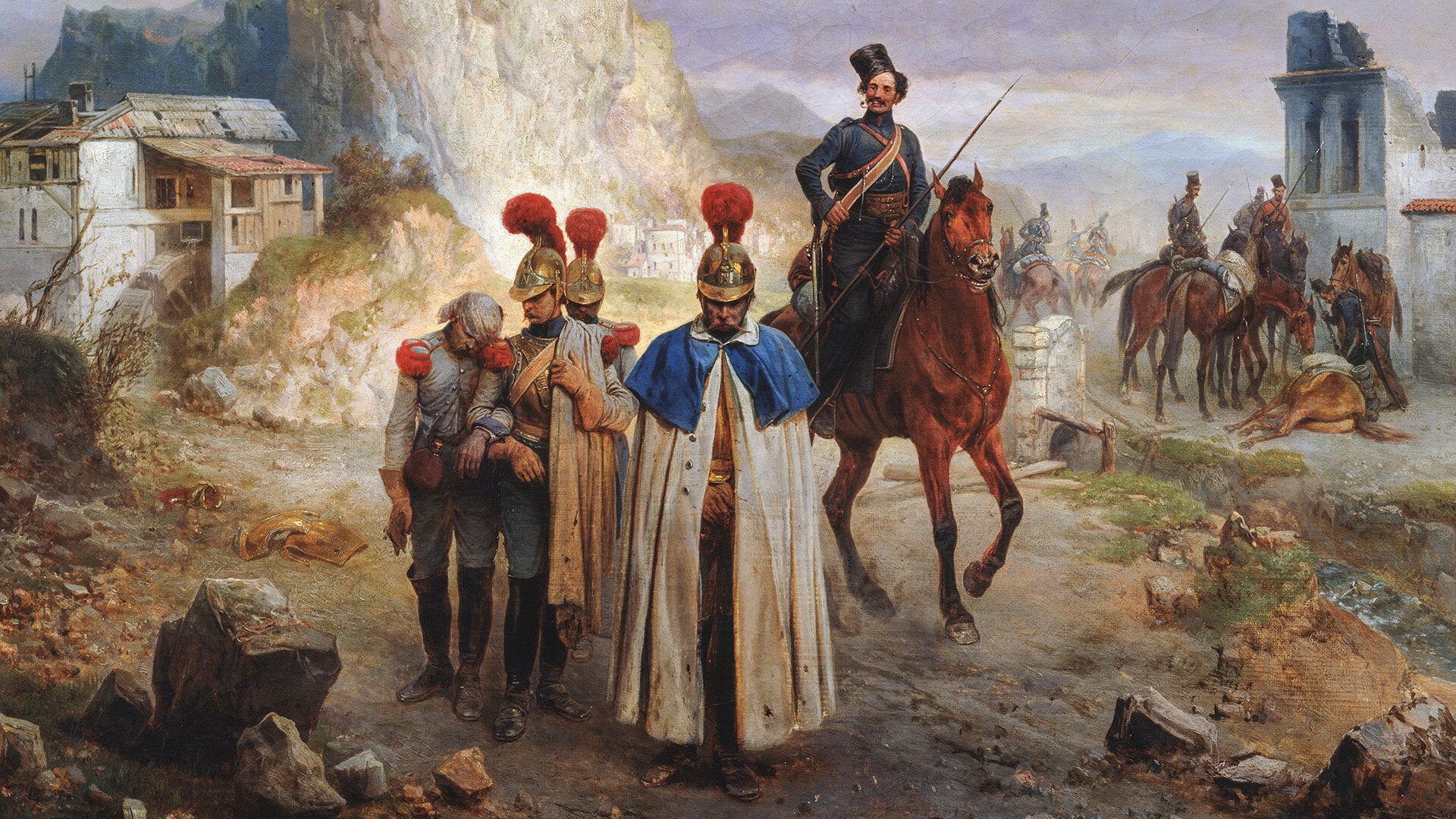 Bogdan Willewalde/Taganrog Art Museum
The “fierce and brutal” Russian Cossacks were feared like the plague in early 19th century Europe. This, however, did not stop a certain number of “civilized” French officers from eagerly joining their ranks.

“They were huge in stature, in furry hats pulled down over their heads, with cruel staring eyes, brandishing blood-stained lances and sporting necklaces of human ears and watch chains around their necks…” was how the French saw the Cossacks who, as part of the Russian army, made their way into France in 1814.

The irregular Cossack regiments that had fought so successfully against Napoleon’s Grande Armée during his invasion of Russia and in the battles in Europe that followed, seemed truly exotic to the French. They saw the terrifyingly fierce, bearded “northern bears” as a vivid emblem of “Russian barbarism”. 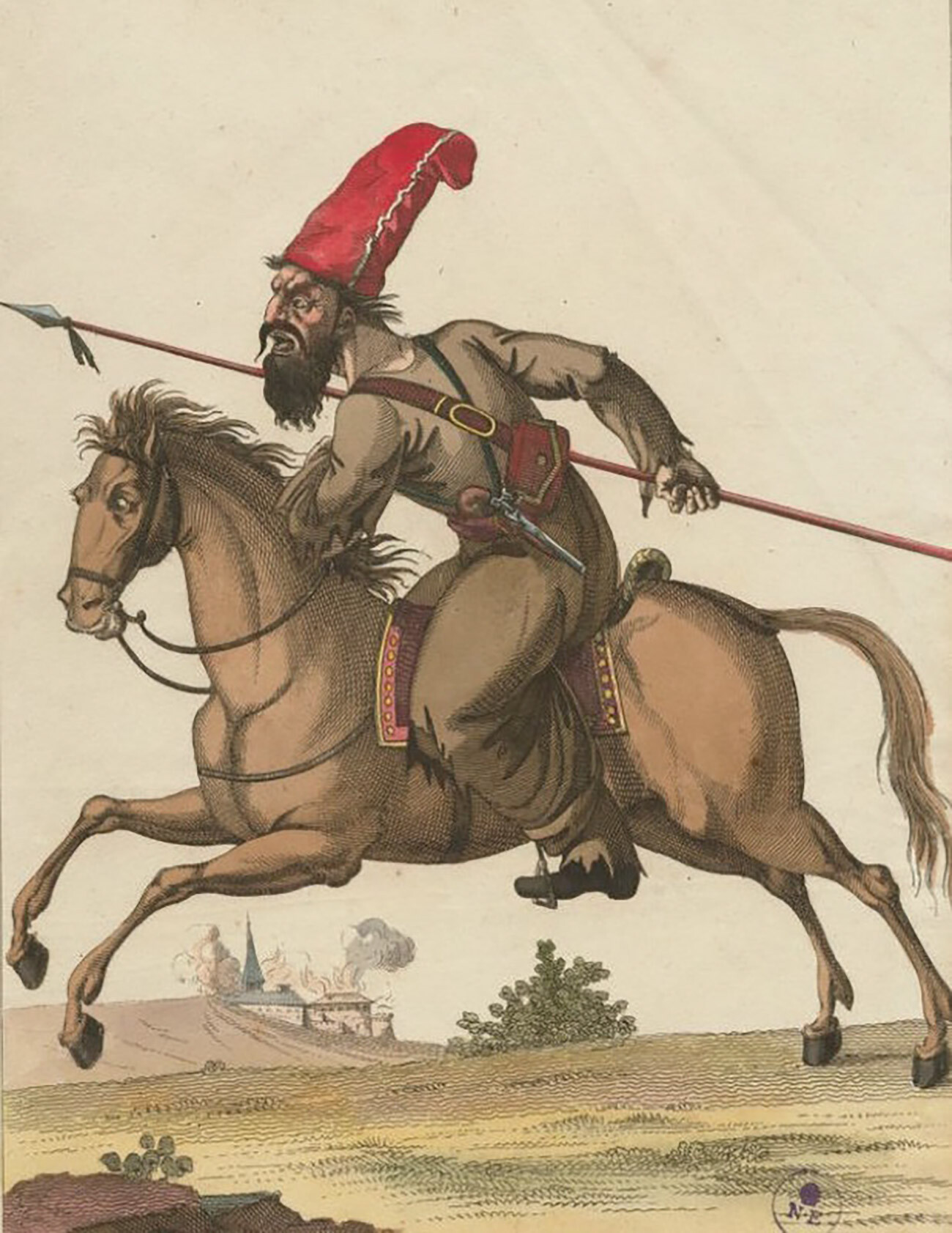 It is all the more surprising that quite a few of Napoleon’s French soldiers and officers voluntarily and even eagerly joined the ranks of the Russian Cossacks. How did it happen?

More than 400,000 soldiers of the Grande Armée invaded the Russian Empire in the Summer of 1812. Later, they were joined by reserve forces from Europe numbering another 200,000 men.

By the end of the year, out of this huge number, only 80,000 had made it out of inhospitable Russian territory along with their emperor, while between 300,000 and 400,000 men had been killed in battle, died of hunger and disease or had deserted. About 200,000 men, including “48 generals and 4,000 officers”, ended up in Russian captivity.

To keep so many prisoners in the western part of the empire that had been devastated by war was almost impossible and, “in order not to put too much burden on the local population and to prevent them from escaping”, the French started to be escorted eastwards, deep into the vastness of Russia.

Although efforts were made to provide the French with sufficient food and appropriate clothing, they mainly set off to their places of captivity in winter dressed in light summer uniforms. Prisoners died from frostbite and outbreaks of “malignant and contagious diseases”, because of which local people in villages and towns along the way flatly refused to let them anywhere near their dwellings. 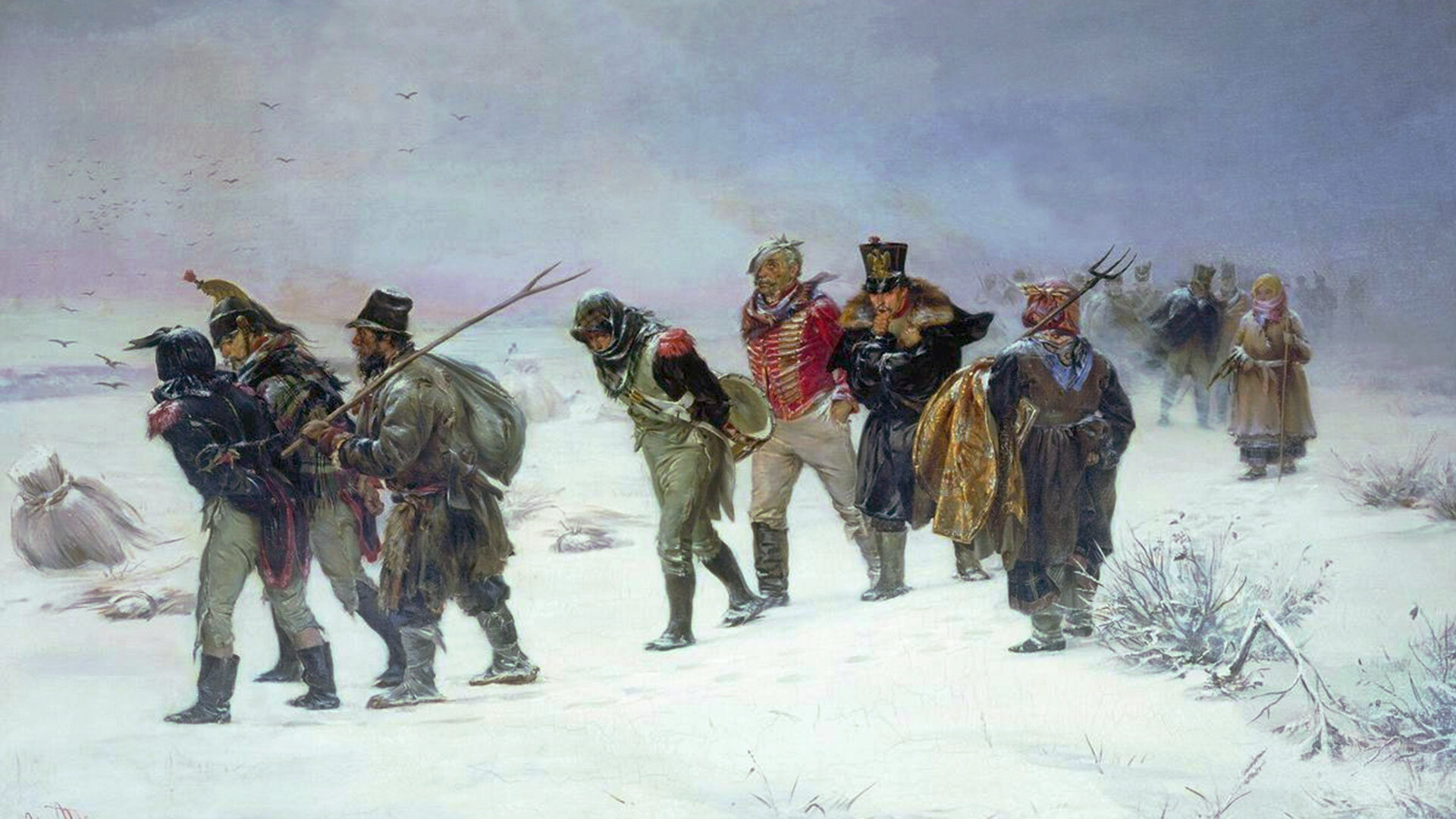 French retreat from Russia in 1812.

Many prisoners, however, did survive the arduous journey. Thus, almost 170 officers and over 1,700 lower ranks of the once great Napoleonic army made it to Orenburg Province (on the border with present-day Kazakhstan), where the phenomenon of the “French” Cossacks was eventually to emerge.

There was no point in keeping prisoners under constant surveillance in such a remote province. They had nowhere to go anyway: The distance from Orenburg to the western border of the Russian Empire was more than 2,000 km.

Officers received monetary allowances from the state and even rented their own accommodation. Also, the local gentry, fascinated by distant France, gladly invited them to stay in their houses. Ordinary soldiers, who received far less money, were housed in peasants’ dwellings, where they had to pay for their board and lodging with hard physical labor.

The local people, who had not experienced the impact of the French invasion, were fairly restrained in their attitude to their temporary guests. The main condition for maintaining neighborly relations was respect for local customs and ways of doing things.

The first group of former servicemen of the Grande Armée to start being allowed to go home were the Germans, in 1813, and, on December 14, 1814, a proclamation was issued declaring that “all captured Frenchmen have been released”. 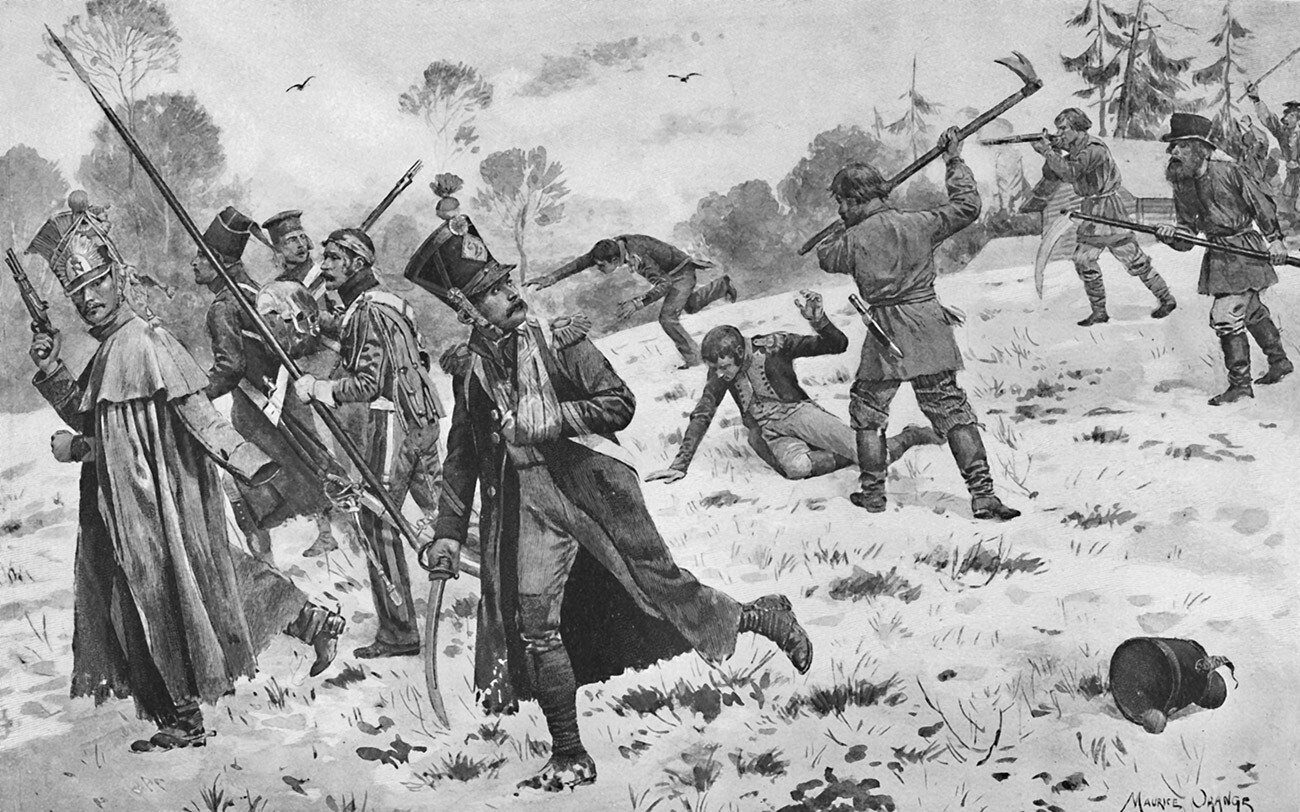 As it turned out, many decided not to leave “savage Russia”. Whereas in war-ravaged Europe their prospects were somewhat uncertain, in Russia, they were regarded as representatives of a high culture and were readily offered jobs as tutors to children of the gentry, a good salary and a roof over their heads. In all, around 60,000 French captives who had found themselves in the empire expressed a wish to adopt Russian citizenship.

In Orenburg Province, there were eventually around 50 men wishing to remain in the country that they now regarded as home. They actively learned Russian and converted to the Orthodox Church, while even those who had not yet changed religious affiliation started crossing themselves in front of icons and before meals.

In the town of Birsk, one enterprising Frenchman opened a “Parisian Café”. Others set up successful businesses making and selling straw hats to fashion-conscious local women or beautiful gaming dice, which enjoyed great popularity.

Some took a decision that seemed unthinkable for the French: To become something that every “civilized” person feared like the plague - one of the “savage” Cossacks. The first five volunteers were recruited into the Orenburg Cossack Army at the end of 1815.

The author of the monumental ‘Explanatory Dictionary of the Living Great Russian Language’, Vladimir Dahl, recalled how, in the Urals in 1833, he had personally encountered just such a French Cossack: “Our Cossacks had taken him prisoner in 1812 and brought him here, to the Urals; he put down roots, married and joined the Cossacks himself. So there he was: The French Cossack, Charles Bertu!” 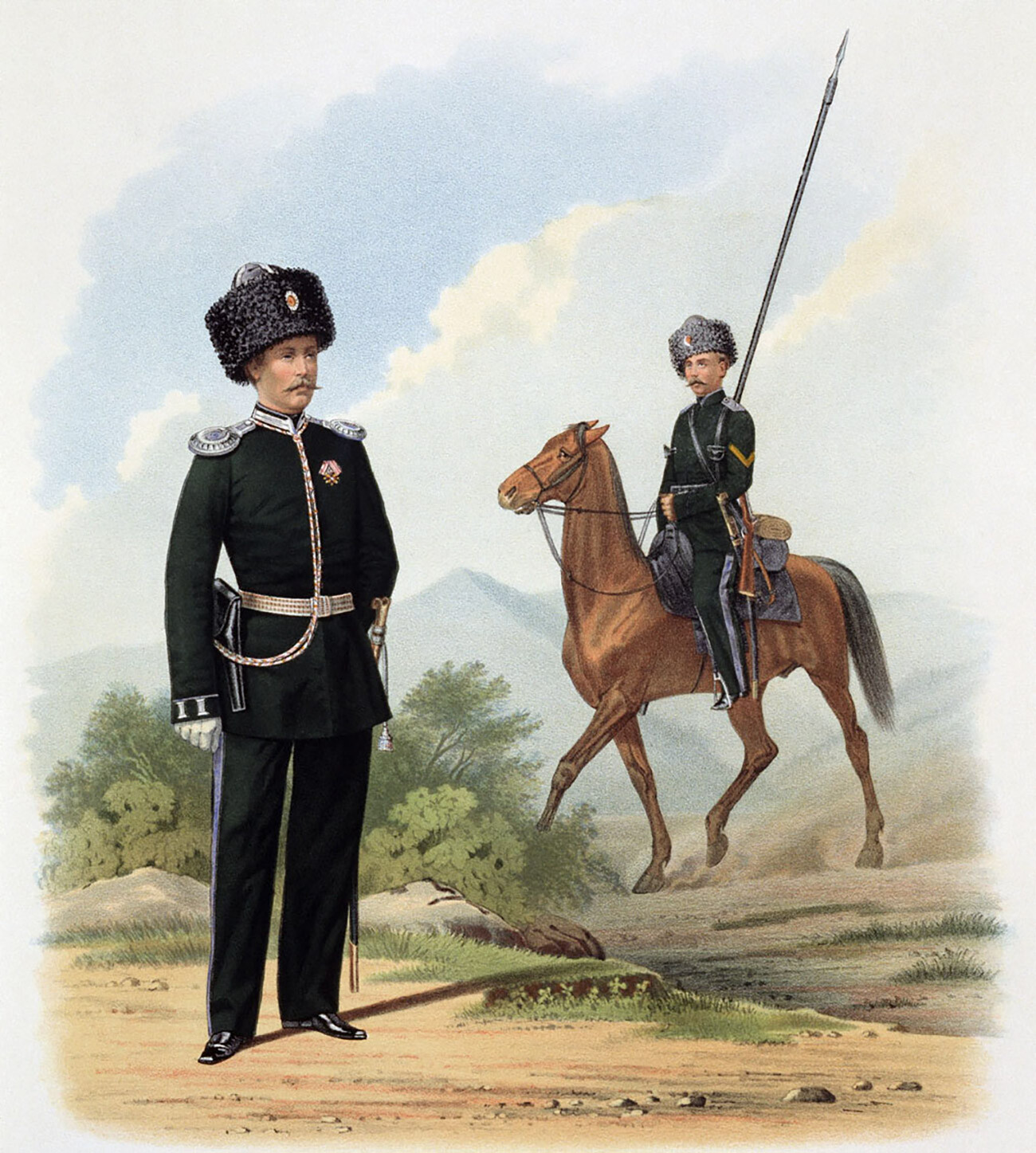 The precise number of Frenchmen who expressed a willingness to join the Cossacks is unknown. It has been established that towards the end of the 19th century there were 48 descendants of captured Grande Armée soldiers in the ranks of the Orenburg Army.

Some of the sons of the Frenchmen-turned-Cossacks made glittering careers.  For instance, the son of Napoleonic soldier Désiré d’Andeville, Viktor Dandevil, rose to the rank of general and distinguished himself in the Russo-Turkish War of 1877-78 and military campaigns to annex Central Asia to the Russian Empire.

With time, the French Cossacks progressively lost their French identity. Reluctant to stand out from their comrades-in-arms, they extensively adapted their surnames to make them look Russian. For instance, the grandchildren of officer Jean Gendre went by the name of Zhandrov. By the early 20th century the “Napoleonic” Cossacks had conclusively assimilated into Russian society.