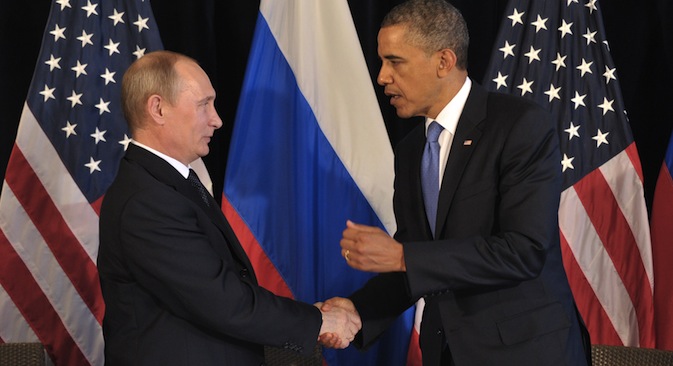 Russian President Vladimir Putin and U.S. President Barack Obama (from left) hold a meeting on the eve of the G20 summit at the Hotel "Esperanza" in Los Cabos. Source: RIA Novosti / Alexei Nikolsky

While Barack Obama has officially embarked on his second term at his second presidential inauguration, prominent Russian pundits Nikolai Zlobin and Fyodor Lukyanov make their guesses about the future of U.S.-Russia 'reset.'

"I think Obama would like to continue the 'reset' policy. I understand, the accent will be put in this reset on conventional arms reductions, nuclear weapons and the attainment of the global status quo," he told Interfax on Sunday.

But there is no agenda today that could facilitate the reset. Political willingness alone will not suffice, he said.

"There are no occasions suitable for improving Russian-American relations. They have not been seen for a long time. Therefore, bilateral relations will be objectively deteriorating. There is no agenda for now for a renewed reset except mutual sympathy that will manifest itself in political demagogy," he said.

Zlobin said that the Magnitsky Rule of Law Accountability Act, signed by Obama, had a negative impact on Russian-American relations.

"It is not the Magnitsky law, of course, that will set the tone in the entire spectrum of relations," Zlobin added. "As the Jackson-Vanik amendment was once a fly in the ointment, so will the Magnitsky law be, without seriously influencing global problems or bilateral relations as a whole. The Russian reaction added another blot on the landscape, spoiling it big."

A chill in relations with Moscow had been sought by Obama's opponents, who found a pretext for spoiling them by initiating an anti-Russian bill, Zlobin said.

Another analyst, Foreign and Defense Policy Council Chairman Fyodor Lukyanov, said, "Obama's foreign policy will not be particularly active given the U.S. leader's plans to cut the number of global problems it will have to tackle."

"In this setting, foreign policy will be less active by all accounts. The U.S., as the country claiming global leadership, cannot just distance itself from global problems. But Obama will try and cut their number as much as possible, and make them less consuming financially. For instance, troops pullout from Afghanistan, schedule for 2014, could occur earlier," he said.

"Russia will not be Obama's foreign-policy priority in this context, he added.

"Russia will matter as an additional instrument of tackling problems important for the administration: withdrawal from Afghanistan, as well as Syria and Iran. But all of these issues stand separately without forming a single line for accomplishing what is called "reset" - a kind of a package deal to take each others' interests into account," the Russian expert said.

The administration will focus on domestic problems: "The state debt, the final confirmation of the health reform that will make it irreversible, plus the new polarizing issue - the freedom of access to weapons, all of which will take a lot of time and strength," Lukyanov said.