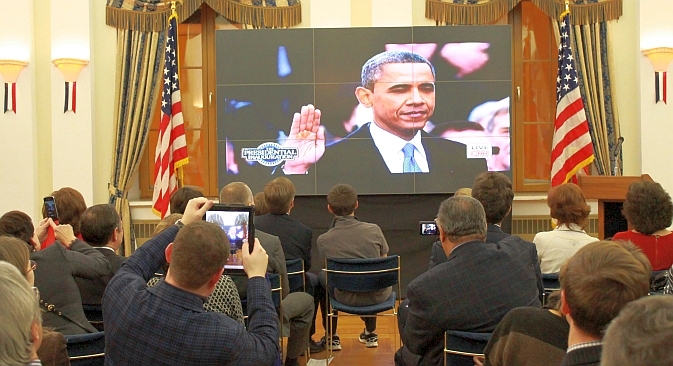 With the beginning of Barack Obama’s second term, Russian experts express a range of views on the potential for bilateral relations.

As Barack Obama took the presidential oath of office on the steps of the U.S. Capitol for the second time, a group of Americans and Russians gathered around a big-screen TV in the Moscow residence of U.S.

Ambassador to Russia Michael McFaul to watch the ceremony live. The guests of the ambassador included Russian journalists, politicians, opposition activists and scientists as well as academics and exchange program fellows and directors. Following the inauguration ceremony, Ambassador McFaul took the floor and invited guests to join him in celebrating the beginning of President Obama’s second term.

For Russian pundits, the U.S. president’s second term means the second round of the “reset” of relations between the United States and Russia. Despite growing differences between the two countries, Russian experts do not rule out an improvement in bilateral relations, particularly in such fields as education and business.

These fields provide more opportunities for the U.S. and Russia to see eye-to-eye – unlike both domestic and international politics, where officials on both sides continue to argue over such issues as missile defense, human rights and the situation in Syria.

Education and science on the periphery

“Two major factor factors may hamper U.S.-Russia relations,” said Alexei Arbatov, an expert at the Carnegie Moscow Center. “First, Russia is not seen as key priority in American foreign policy. The U.S. focuses on Afghanistan, Iran, Iraq, Syria and, generally speaking, on the Arab world. At the same time we can see a shift in the U.S. foreign policy to the Asia-Pacific region. Russia doesn’t play a significant role.”

The second factor that may cause additional deterioration in Russian-American relations is Russia’s domestic policy. Arbatov echoed the view of many experts that Russian President Vladimir Putin’s actions, including a series of laws adopted in 2012 that restrict political activism, indicate a tightening of the screws in the country. “He [Putin] takes the course of consolidating power in his hands and curbing democratic freedoms within the country,” Arbatov said.

These changes have resulted in criticism from American officials that has not set well with Moscow. “The attitude of the West is very important for Russia,” Arbatov said. “What is the most important for Russian is whether it is treated with respect abroad or not. The Kremlin doesn’t want to develop relations with the U.S. in terms of increasing criticism from the West toward Russia’s domestic policy,” Arbatov said.

However, Arbatov suggested some foreign policy arenas that could become the basis for improved bilateral relations.

“Nonproliferation treaty is a field where Russia is regarded as a main partner,” Arbatov said. “Nevertheless, we are hardly likely to see any progress here given the complicated situation on this issue. Russia won’t make any concessions and the U.S. is more likely to give up [seeking common ground in this issue] and deal with other problems.”

Arbatov acknowledged that the environment, education, science, cultural exchange and business are very important for the future of U.S.-Russia relations, but said that cooperation in these fields is superficial without close political partnership and mutual political understanding.

“[Such programs] don’t change the situation generally,” Arbatov said. “Educational, scientific and environmental collaboration is on the periphery of U.S.-Russia relations. That’s why our political differences and the lack of economic ties can’t be resolved only by educational and cultural partnership.”

In contrast, Maxim Kisilev, chief development officer of the Skolkovo Technopark said that there are some positive signs for improvement of U.S.-Russia “at least in two fields.”

According to Kisilev, scientific and technical collaboration will remain among key priorities in U.S.-Russia cooperation, and Russia’s domestic policy and controversial laws are hardly likely to seriously affect the bilateral partnership in these fields.

“Both Russia and the U.S. are seriously concerned with problems of innovations and transition to intellectual economy,” Kisilev said. “I don’t think that the so-called Dima Yakovlev law will hamper our innovation collaboration. At worst, it will bring about indignation, but won’t affect our joint projects.”

Kisilev added, “The collaboration between Massachusetts Institute of Technology and Skoltech is a good example of intellectual partnership that can address the major innovation challenges.”

Skolkovo and its American counterparts have also stepped up efforts in development of space clusters, biomedical and information technologies projects.

“There is keen interest from the U.S. in Russian innovation projects and technological start-ups. In the U.S. there is a lot of funding, but the problem is to find new ideas that can be gotten off the ground,” Kislev said. “And now there is a soft rivalry in the U.S. and Russia for ideas. That’s why the American side creates more opportunities for Russian start-ups.”

Edward Lozansky, president of the American University in Moscow, said that there are three positive signals for U.S.-Russia relations coming at the start of Obama’s second term. The first is Obama’s promise during the campaign that he would seek compromises with Russia if re-elected. Secondly, John Kerry, the nominee to be the next U.S. Secretary of State, is “more reasonable” than his predecessor.

And third, the nominee to head the Pentagon, Chuck Hagel, is less inclined to geopolitical risks.

According to Lozansky, the American missile-defense system in Europe is one of the most important aspects of U.S.-Russia strategic collaboration. “In this case, Russia could be more flexible and use its soft power to persuade or explain to the U.S. what advantages the U.S. will benefit from the creating of a joint missile-defense system, an idea that was earlier proposed by then-President Dmitry Medvedev.”

Lozansky argues that Russia should reinforce its soft power abilities in order to be more persuasive in the U.S. on geopolitical and military issues. “Although there are few attempts to fill the gap in this field, Russia has failed to use its soft power,” Lozansky said.