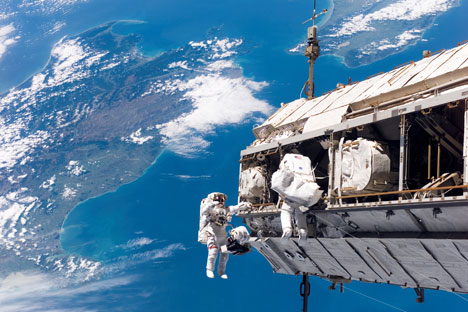 Russia will be responsible for the pre-flight training of NASA astronauts, as well as the delivery of cargo to the International Space Station (ISS) and back. Source: NASA / STS-116 ISS Expedition.

U.S. President Barack Obama has signed a law authorizing NASA to extend its commercial cooperation with Russia until 2020.

“On Monday, the president signed the bill extending NASA’s authority to effect payments to Russia for activities at the International Space Station, from July 1, 2016 until December 31, 2020,” a press statement issued by the White House said.

Russia will have over 110 satellites serving national needs by 2020

The bill, which was backed by Congress in late December 2012, also extends the U.S. secretary of transportation’s mandate to effect payments under the claims for damages caused by commercial launches, according to RIA Novosti.

Russia will also be responsible for the pre-flight training of NASA astronauts, as well as the delivery of cargo to the International Space Station (ISS) and back.

Currently, Russia’s Soyuz spacecraft are the only means of transportation used to fly astronauts to the ISS. Itar-Tass notes that the United States closed down its Space Shuttle program in 2011 for financial reasons, deciding to focus instead on the development of spaceships capable of reaching higher orbits and, in particular, of flying to Mars.

The list of the next ISS mission participants has already been published on NASA’s website. It costs the United States $60 million to deliver one astronaut to the station onboard a Russian space vehicle. According to military industry magazine Voyennoye Obozreniye, Roscosmos (Russia’s space agency) has been increasing its rates on a regular basis. In 2012, it cost $51 million to send a U.S. astronaut into space; in 2013, that figure stands at $55.8 million.

Shuttle launches, however, are far more expensive. A single mission requires around $450 million. Shuttles can carry up to eight passengers, but the United States has no use for so many people in space. The U.S. has yet to find a fully functional replacement for the costly shuttles.

In its search for alternative ways to fly to the ISS, NASA has also been considering the possibility of creating a simplified version of the Orion spacecraft, which was originally intended to be part of the Constellation program. Another option includes using Dragon, the spacecraft developed under the COTS (Commercial Orbital Transportation Services) program by the private company SpaceX.

This article is based on materials from Rossiyskaya Gazeta, Itar-Tass, RIA Novosti and Voyennoye Obozreniye.