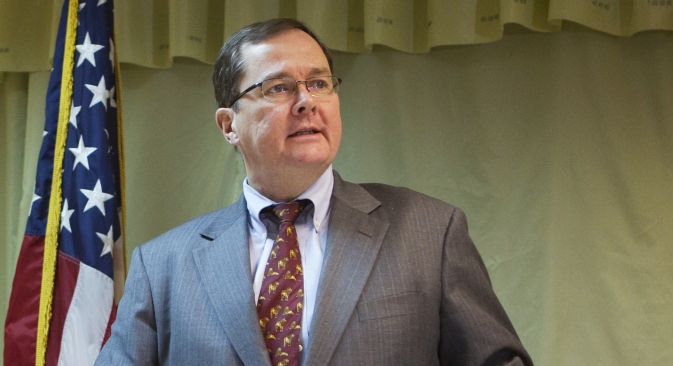 The U.S decided to withdraw from the working group on civil society of U.S.-Russia bilateral presidential commission. While Russia's authorities regret this stance and some human rights activists see it as a wrong step, others hope for a new agreement.

The U.S. has made a decision to withdraw from the working group on civil society issues of the Russian-U.S. bilateral presidential commission, U.S. Deputy Assistant Secretary of State in the Bureau of Democracy, Human Rights and Labor Thomas Melia told Interfax on Friday.

Because the Russian government has taken actions aimed against civil society, this working group is no longer an appropriate or effective forum promoting the expansion and strengthening of civil society, Melia said.

At the same time, Melia said Russia and the United States will continue working together in the sphere of human rights with the Russian government and representatives of civil society.

USRF may pick up where USAID left off in Russia

The U.S. government is ready for fair and open dialogue on civil society and human rights with the Russian government and civil society, and the United States will continue expressing concerns, both publicly and privately, about the new laws restricting civil society activities, during intergovernmental contacts, he said.

Other issues handled by the working group, namely, issues relating to children, the fight against corruption, human trafficking, and the situation in prisons, can be resolved in other working groups and/or other structures, Melia said.

"This information has reached us from U.S. officials," he said. "It has until now reached us verbally, we have not yet received any written official documents on Washington's decision to withdraw from this format of dialogue with Russia." >

When asked how Russia will react to the U.S. decision, the diplomat said: "We will react officially when we get official notification. We can now say that Russia made specific proposals to our U.S. colleagues to call another meeting of the working group, which was to be held in Moscow, throughout 2012."

Dolgov said Russia has offered the United States several options for such a meeting and also made specific proposals in the format of a discussion based on the agenda of the group, which was approved by the administration of the two countries.

"Unfortunately, we never received the U.S. consent to come to Russia to take part in the official meeting of the group," Dolgov said. "All of our proposals remain in force, we have not recalled them. We are ready to continue helping Russian civil society, which wants to continue talking with the U.S. colleagues, including in the format of this group."

"We regret whenever a bilateral format is cancelled without an appropriate substitute," presidential press secretary Dmitry Peskov told Interfax.

When asked whether the U.S. decision will affect the work of the other working groups, he said: "As far as I know, there was a pause in the work of these groups. They may have to be reformatted somehow."

At the same time, Lyudmila Alekseyeva, chairman of the Moscow Helsinki Group, said she does not regret the U.S. stance.

"This group did not work properly," she told Interfax. "We need to make something new, we need to try again. I understand why the Americans did that. That commission had turned into an imitation."

Alexander Brod, director of the Moscow Human Rights Bureau, sees the decision made by the United States as "the wrong step."

"This group was formed during the 'reset' of the bilateral relations," he said. "The meetings of the group were constructive and involved prominent experts. They addressed common issues that concern Russia and the U.S. If the U.S. withdraws, it's a demonstrative step on their part, which confirms that America is not interested in developing relations with Russia and relations between NGOs."