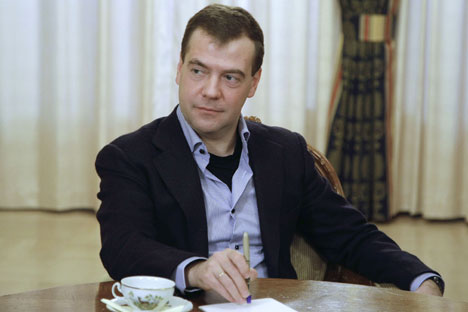 The prime minister told Handelsblatt that Russia was interested in the closest possible integration relations with the European Union. Source: DPA / Vostock Photo.

Though optimistic about the eurozone’s future, Russia is not planning to buy European debt anytime soon. Instead, according to Prime Minister Medvedev, Russia should look at options for swapping part of its euro reserves and reducing dependence on hydrocarbon exports. Experts agree, believing Russia should steer clear of other countries’ financial problems and face its own economic challenges.

Russia’s assessment of the EU’s anti-crisis efforts is one of “cautious satisfaction.”  The crisis is not over yet, but there are “glimmers of hope,” according to Russian Prime Minister Dmitry Medvedev.

“I believe that the responsible position of the leading states, including Germany, has made a contribution in this sense,” Medvedev said in an interview with one of Germany’s leading business newspapers, Handelsblatt.

However, Russia is still in no hurry to by European bonds.

“We have a different mission: 42 percent of our reserves are in euros, and we have an option to get rid of them and exchange them for securities denominated in some other currency. Our total reserves are in excess of $500 billion. That’s a considerable amount, so this is already about sharing risks,” said Medvedev.

Investcafe analyst Anna Bodrova does not believe the EU should “rely on Russia in the matter of buying European bonds, for China is the likeliest buyer.” Moscow, for its part, should stay away from other countries’ economic problems for the time being, she says.

The prime minister told Handelsblatt that Russia was interested in the closest possible integration relations with the European Union, emphasizing that the economic situation in Europe largely depended on the status of Russian-German relations.

When asked whether he would like to continue working with an Angela Merkel government after the Bundestag elections this summer, Medvedev said that he was on very good terms with the German chancellor.

“I have always enjoyed discussing the most diverse issues with her, including foreign policy and economics,” the Russian prime minister said. “Vladimir Putin and Angela Merkel also have good friendly relations. There are, of course, some emotional aspects, but this is a purely personal matter.”

Commenting on the eurozone’s Cyprus bailout plans, Medvedev did not rule out that Russia may help Cyprus. “Cyprus has a substantial margin of strength, unlike some other countries that are in trouble, such as Greece,” said Medvedev.

“We believe that the main responsibility for resolving these issues rests on Cyprus itself, as well as on the European Union states. But we will not refuse to help out in certain circumstances — that is, once all the main agreements have been achieved, but not before,” Medvedev said, recalling that Russia had loaned Cyprus $2.5 billion in 2011.

Furthermore, Medvedev reiterated that the Russian government intended to reduce the country’s dependence on hydrocarbons.

“Less than 50 percent of our revenues come from raw materials. So there is something else, namely, the domestic market, that is giving a serious impetus to development,” said Medvedev.

Solid Investment & Financial Company analyst Dmitry Lukashov estimates Russian export and tax revenues from hydrocarbons at 65 percent. “The reserves we have now are enough to keep the production rate at least at 500 million tons annually for the next eight or nine years. During this period, the government will have to address two challenges: to start developing offshore fields and, even more importantly, to reduce the dependence of the Russian economy on the export of hydrocarbons,” says Lukashov.

“I guess that to reduce the dependence on hydrocarbons fast is a doable task if we slash import in value terms and manage to substitute it with domestically made products. It may sound like the Juche idea in North Korea, but at a later phase we’ll have a chance to become a high-tech economy, just the way Finland did. It is better to start modernization right now, while we still have oil and around $60 billion in the Reserve Fund and the National Welfare Fund,” Lukashov says.

This year, the government plans to continue its campaign to privatize state-run assets. There are plans to sell large stakes in Russia’s biggest ship-owner, Sovkomflot, and the country’s second-largest bank, VTB.