The Big Chill: Will the U.S.-Russia reset keep cooling? 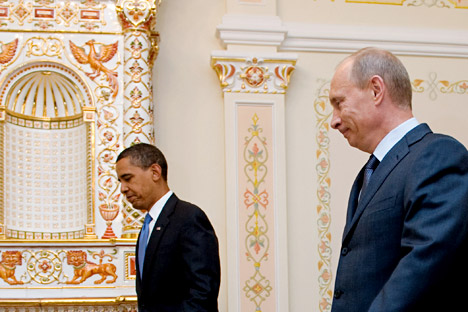 One of the central elements of reset was the way Obama administration changed its tone in dealing with Russia. Source: AFP/East News.

To try and sort out the perceived chill between the two countries over recent months, Alexander Gasyuk of Rossiyskaya Gazeta’s Washington D.C. bureau sat down with executive director of the Washington, D.C.-based Center for the National Interest Paul Saunders.

Recently, in its turn, Russia pulled out from a law enforcement and counternarcotics agreement with the United States. Moscow called this 2002 treaty “outdated.”

To try and sort out the perceived chill between the two countries over recent months, Alexander Gasyuk of Rossiyskaya Gazeta’s Washington D.C. bureau sat down with executive director of the Washington, D.C.-based Center for the National Interest Paul Saunders. Is there any chance of salvaging the “reset” policy?

RBTH: Do you believe that Russian President Vladimir Putin and U.S. President Barack Obama could reverse the negative momentum, which is clearly taking place in bilateral relations?

Paul Saunders: Certainly both sides have the capacity to turn this momentum around if they really want to. The real questions are whether they want to do that and how much energy both leaders would be prepared to put into improving that relationship.

Obviously people referring to the negative trend are [talking about] the recent Magnitsky bill and adoption legislation in Russia. However in reality this trend started a year ago - since the time of elections and protest in Russia; after the way U.S. Ambassador Michal McFaul was treated by the Russian media; and President Putin’s May 7 decree, which at least as I read it, reflected the lower priority given to the United States and the much bigger role given to Europe and Asia.

Russia, US may sign a new arms disposal agreement

So this trend has been building for a while. And it fundamentally reflects underlying problems: One is that the “reset” policy accomplished most of the things that were relatively easy and straightforward and where differences were narrower. The issues that are left are much wider. Obviously at the same time there are unresolved tensions related to how Russia is governed. The U.S. has its perspective and the Russian government has its perspective, which makes it difficult to do a variety of other things.

RBTH: Is there any chance of salvaging the reset policy?

P. S.: One of the central elements of reset was the way Obama administration changed its tone in dealing with Russia. And stopped denouncing Russia in the way Bush’s administration did. However the combination of the U.S. reaction regarding elections in Russia and U.S. reaction to Russia’s position on Syria has effectively eliminated improvements.

My personal view on the issues of mutual interest which are left is that cooperation on Afghanistan and on the security environment in South and Central Asia are probably the most promising topics to turn the negative momentum around. Things like Syria, missile defense, arms control, European security - all this is going to be very hard.

RBTH: Obama’s national security advisor Tom Donilion had planned to visit Moscow in January, but it seems this visit is put on hold or delayed. What’s on the top of the White House’s international agenda and if Russia has a role to play in this regard?

P. S.: I heard some discussions about President Obama possible going to Russia before the G-20 summit in Saint Petersburg. Even if a possible visit to Russia is something that the U.S. President is exploring it’s a positive sign that the U.S. is trying to make an effort in improving relations with Moscow.

My sense of this administration is that this President’s focus is overwhelmingly domestic. He wants to turn the economy around, he has a wider domestic agenda and some parts it are politically controversial and he may have to spend political capital on it.

As far as the U.S. international agenda is concerned, clearly Iran is still a very pressing issue. What the Obama administration really wants to try to find is a way to stop Iran from acquiring nuclear weapons without engaging in military action, because military action creates all kinds of unpredicted consequences both internationally and domestically. I believe the White House wants to avoid that. From that perspective there is some room for cooperation and overlap with Russia. Moscow also doesn’t want Iran to have nuclear weapons and doesn’t want American military action.