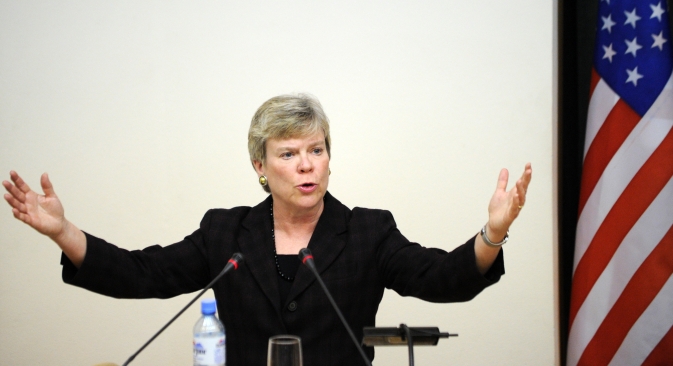 Rose Gottemoeller, undersecretary of state for arms control, is expected to propose launching negotiations between Russian and the U.S. on further reductions in nuclear arsenals during her upcoming visits to Russia. Source: AFP / East News

American officials believe that the new move to cut nuclear weapons will save the U.S. and Russia up to $8 billion a year.

The Pentagon believes the number of warheads allowed by the New START Treaty is still too high and proposes introducing a limit well below the number specified in the agreement. High-level meetings on the issue are scheduled between U.S. and Russian officials in mid-February, but, if Moscow declines, the U.S. may start scrapping warheads unilaterally.

Washington is setting the stage to propose that Russia scrap more of its nuclear arsenals. A new dialogue will be opened with Russia during the visit by Undersecretary of State Rose Gottemoeller, which is slated for Feb. 12. The White House believes that both countries can half their arsenals without compromising their security.

The RBTH comix: A new round of US-Russia negotiations. CLICK TO READ MORE.

During their meeting in Munich on Feb. 2, Vice President Joseph Biden informed Russian Foreign Minister Sergei Lavrov that the U.S. was ready to start discussing additional arms cuts. Sources in the White House claim that the proposal received a cool reception.

“They are concerned in Russia that the move would enrage the military and representatives of the military industrial sector, who have been promised money to develop the SS-27 intercontinental ballistic missile,” the source said.

The new proposal stems from a report by the Department of State, the Pentagon, the National Security Council, the Joint Chiefs of Staff, the intelligence service and the U.S. Strategic Command. The secret memorandum specifies a new list of targets for U.S. strategic forces.

Iraq and Syria are no longer on the list of targets, but facilities in Russia, China, North Korea and Iran do remain among potential targets for U.S. strategic forces. According to a recent doctrine, a first strike would have been aimed at destroying a country’s leadership and inflicting “irreparable damage” on its armed forces. Now, experts believe, the missiles could be re-targeted at key economic and military facilities.

The number of such targets is falling. A report by the Federation of American Scientists (FAS) claims that American missiles had at least 660 missile silos in Russia “in the cross-hairs.” The number of potential targets has now halved and is expected to be reduced even more. Analysts believe that the number of Russian ballistic missiles on combat duty is unlikely to be more than 230 now.

Washington believes 1,000 to 1,100 warheads would be enough for effective nuclear containment, according to the most recent scenario. However, the recent New START agreement allows both Russia and the U.S. to keep a much larger nuclear stockpile. Under the treaty, each country must have no more than 1,550 warheads on combat duty by 2018.

The counting system assumes, however, that a single strategic bomber can carry only one warhead, whereas a bomber can actually carry up to 20. This rule alone enables each country to have up to 1,900 nuclear warheads.

The treaty fails to limit the number of short- and intermediate-range warheads, as well as warheads in storage. According to FAS data, the U.S. has 2,700 such units, with the respective figure for Russia, at 2,680, being almost the same.

The Pentagon considers these numbers to be too high. James Kowalski, head of the Global Strike Command, has called for a reduction in the number of strategic warheads on combat duty to below the 1,500 limit introduced by the treaty.

Such a move would almost halve the total American nuclear arsenal, bringing it down to 2,500 warheads. That could lead to considerable financial savings: a decision to cancel construction of at least two Trident-class submarines out of the planned 12 would save $16 billion, while dismantling of one ground-based strategic missile command would cut U.S. spending by $360 million a year.

The details of the report submitted to the president have not yet been revealed. Even so, the heads of key agencies are known to have backed the new strategy. Former Sen. Chuck Hagel, who is awaiting the vote on his nomination as secretary of defense, has confirmed that he said, in a report to the president last summer, the number of nuclear warheads currently in the inventory of the U.S. Armed Forces “is much higher than the number required for adequate nuclear containment.”

Sources in the White House have confirmed that President Obama supports these conclusions. A plan for a further reduction in the nuclear arsenal might be made public within the next few weeks; however, Washington needs to clarify Russia’s position on this issue.

Both the undersecretary of state, Rose Gottemoeller, and the national security advisor in the Obama administration, Thomas Donilon, are expected to propose launching negotiations on further reductions in nuclear arsenals during their upcoming visits to Russia. The U.S. is certain that such an agreement could be framed as a supplement to the START Treaty or as a protocol of intent.

A source close to the U.S. administration said “if Moscow rejects the proposal, the White House might seek an affirmative vote by two-thirds of the senators to start scrapping nuclear warheads unilaterally.”