No breakthroughs on nuclear arms reduction 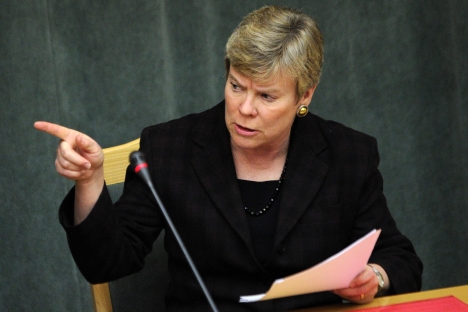 Without U.S. concessions on missile defense, Russia will not discuss nuclear arms reduction

Under Secretary of State Rose Gottemoeller left Moscow with mixed results. No breakthroughs were made on nuclear arms reductions, as Russian officials believe the U.S. proposal is aimed at softening Russia’s stance on missile defense. However, a new agreement could be drawn up to replace the Nunn-Lugar program before the G-20 summit in St. Petersburg.

Thursday, February 14, marked the end of a two-day visit to Moscow by Rose Gottemoeller, the acting under secretary of state for arms control and international security. The U.S. official came to Russia to discuss two key issues: the possibility of further reductions in both U.S. and Russian nuclear arsenals and a new cooperation agreement to replace the Nunn-Lugar program.

As far as Russia is concerned, the first topic is off the table for the foreseeable future, primarily due to differences over missile defense.

Ahead of her visit, Gottemoeller said she was going to Moscow to negotiate a new agreement to reduce the two countries' nuclear arsenals that would "encompass all arms categories: strategic and non-strategic, deployed and non-deployed."

Washington's proposal was met with skepticism in Moscow. A source in the General Staff of Russia's armed forces referred to the U.S. initiative as "not in accordance with the present-day realities" and stated that the idea of a unilateral disarmament was a "political move."

"They are trying to lure us into softening our stance on missile defense," the source said.

The White House believes that Russia and the U.S. could dispose of half their warheads and not compromise to the security of either state. If Moscow refuses to consider the idea, the White House could enlist the support of two-thirds of the Senate and undertake a unilateral reduction.

"For us, missile defense is a cornerstone issue. Without an agreement, Russia will not reduce its arsenal any further," said a source in the Russian Ministry of Foreign Affairs.

According to the source, Moscow and Washington are now looking for ways to provide Russia with guarantees regarding the U.S.-led NATO missile defense system (Moscow wants to be assured that it is not aimed at its nuclear deterrent) without having to seek approval from the U.S. Congress, as opposed to the legally binding guarantees that Russia had previously demanded. However, a compromise has yet to be found.

Before negotiations commence on further reductions, Moscow considers it necessary to fulfill the requirements of the START Treaty, the source noted. "If the talk is of a package agreement, we would like to see it also contain strategic non-nuclear weapons, but Washington is not ready for that," the source said. "There remains the problem of the imbalance [in favor of the U.S.] in conventional weapons. Clearly, it is not a short-term issue.”

More productive negotiations were to be had on the second topic: an agreement to replace the Nunn-Lugar program, under which the U.S. has funded the dismantling of surplus Russian nuclear warheads and chemical weapons since the early 1990s. The Russian authorities have decided not to extend the program when it expires in June, declaring that Russia no longer needs subsidies.

During the negotiations with Gottemoeller, the Russian side stated the conditions under which Moscow would sign a new agreement with Washington on this matter. Diplomatic representatives from the Ministry of Foreign Affairs and the Ministry of Defense said that it must be "based on equality."

Russian Deputy Foreign Minister Sergei Ryabkov said that Moscow was "satisfied with the content of the consultations" on the issue.

"We are moving forward, but to say that we have achieved an outcome or a breakthrough would be premature. But despite the differences, there is a dialogue," said Ryabkov. Asked when a new agreement would be signed, the diplomat couched his words figuratively: "We have not yet reached the last station where everyone has to leave the train, sit down at the table, and put pen to paper."

Meanwhile, according to the president of the PIR Center, Vladimir Orlov, the parties could draw up a draft agreement over the next six months — in time for the meeting between Presidents Vladimir Putin and Barack Obama that is due to be held in September on the margins of the G-20 summit in St. Petersburg. Orlov believes the Nunn-Lugar program should be replaced by a new 10-year program that is more compact in terms of financing and number of projects.

"The priority should be to use the positive experience of the Nunn-Lugar program to implement projects in third countries," said Orlov. "The withdrawal of U.S. assistance programs from Russia will not only remove an anachronism, but also alleviate sore points, such as liability for damages."

Under the Nunn-Lugar program, U.S. contractors hired to work in Russia did not bear any responsibility for incidents and accidents that occurred on their watch.

According to Orlov, the framework of the new program between Russia and the U.S. could include cooperation in the CIS — for example, to improve safety in the nuclear industry. In the Middle East, they could set about retraining nuclear engineers and military scientists from Iraq and Libya.

In addition, Russia and the U.S. could realize projects to combat the proliferation of weapons of mass destruction in Pakistan, Afghanistan, and Southeast Asia.