Middle East: Will the Quartet reach any breakthroughs? 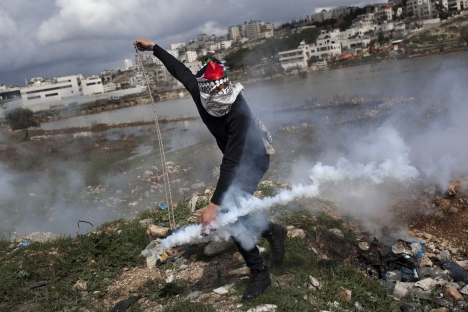 A Palestinian throws back a gas canister previously shoot by Israeli forces, not pictured, during a protest to support Palestinian prisoners, outside Ofer, an Israeli military prison near the West Bank city of Ramallah on Feb.19. Source: AP

Fixing a date for Quartet negotiations, scheduled for March, represents a major diplomatic success for Moscow. Yet it may be marred the lack of coherent agenda and the actions of the U.S., which clearly prefers to go it alone in the Middle East.

A ministerial meeting of the Quartet on the Middle East is set to take place in New York on Mar. 18–19. Russia has long pressed for this meeting, but attempts earlier ran into opposition from the U.S., which considers it a less effective mechanism than forays into the region by officials for solving disputes.

Informed sources in the countries and organizations that act as brokers in the Arab-Israeli settlement have revealed that the date for the Middle East Quartet (Russia, the U.S., the UN and the EU) New York meeting has been tentatively set for Mar. 18–19. So far, there have been no official comments from the diplomatic establishments of any of the Quartet members.

Lavrov: No comfort from a Gaza Strip truce

Will Palestine's new status resolve its conflict with Israel?

However, Russian Deputy Foreign Minister Mikhail Bogdanov made a statement in mid-February that can be seen as indirect proof of the arrangement. Bogdanov told the RIA Novosti news agency that the Quartet meeting may be combined with the U.N. Security Council meeting on Afghanistan, which is to be held in New York in the middle of March.

For Moscow, fixing a date for the Quartet negotiations represents an important diplomatic achievement. The last Quartet meeting at the ministerial level was held on April 11, 2012. Russia proposed organizing the next meeting on the fringes of the U.N. General Assembly in New York in September 2012, but the U.S. rejected the idea.

Later, Moscow called on the parties to sit down at the negotiating table after the eight-day November armed conflict in Gaza, but the U.S. again blocked the initiative — this time at Israel’s insistence.

The Russian Foreign Ministry’s latest statement on this theme barely concealed its irritation.

“Russia has, over the past months, repeatedly proposed to step up the work of the Quartet, especially in the ministerial format,” Foreign Ministry spokesman Alexander Lukashevich said. “But our partners are slow in determining their position.”

He said that the pause in the activities of the Quartet had been linked to “the presidential election in the U.S. and the formation of a new U.S. administration, as well as with the early elections for the Israeli parliament [Knesset].”

Now these obstacles are out of the way. “Israel welcomes any efforts of the world community towards a Palestinian-Israeli settlement if it leads to the start of direct peace talks between the two sides without any preconditions,” said the press service of the Israeli Embassy in Russia.

Moscow’s diplomatic triumph may be marred, though, by two circumstances: the lack of coherent results after the meeting (no one expects a breakthrough) and the actions of the U.S., which clearly prefers to go it alone in the Middle East. For instance, former Secretary of State Hillary Clinton’s recent trip to the Middle East gained her plaudits as the state secretary who stopped the war in Gaza and brokered a truce between the Israeli authorities and Hamas.

Furthermore, the meeting of the Quartet in New York may be eclipsed by Barack Obama’s first visit to Israel in his capacity as the U.S. president. The trip is scheduled for Mar. 20-22 or 21-23 — that is, immediately after the probable Quartet meeting.

“The ministerial meeting of the Quartet is a matter of diplomatic routine. But Obama’s first visit to Israel is something else entirely: for several years, the president had to explain to Israelis and Americans alike why he could not find time to visit a country which the U.S. considers to be its closest ally,” said Dmitry Trenin, director of the Carnegie Moscow Center.

Against the background of the Quartet’s failures — it promised a peace treaty by the end of 2012 and the formation of a Palestinian state by 2013 — the hands-on program Barack Obama will be bringing to Israel looks much more impressive.

This, however, would be in exchange for a Palestinian promise not to use its status of observer state obtained at the recent U.N. General Assembly to prosecute Israel at the International Criminal Court. The freezing of some settlements and release of Palestinian prisoners from Israeli jails will also be discussed.

Moscow has not lost hope that it may also contribute to the Palestinian-Israeli settlement. After its recent initiative to invite the Arab League to take part in the Quartet was met with a lukewarm reaction, Russia has come up with a new initiative.