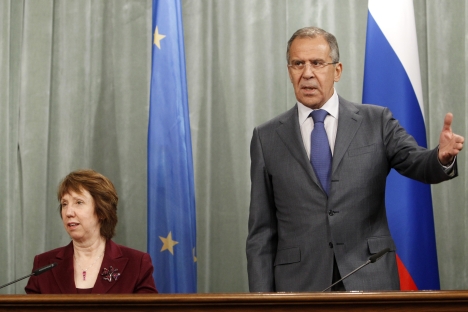 Moscow changes its strategy in negotiations with the EU, hoping to enter a visa-free regime by the end of 2014.

Russia is no longer counting on the abolition of visas with the EU for the Winter Olympics in Sochi. Moscow now hopes to reach the decision by the end of 2014. This question was the key at talks in Brussels on Feb. 19, where Russian Foreign Minister Sergei Lavrov met with EU representative Catherine Ashton.

For one, the two parties have not been able to sign the contract on the substantial simplification of visa formalities, which has actually already been agreed upon. Moscow insists that the contract include a clause on the abolition of visas for holders of official passports, but Brussels opposes this measure. The diplomats have been trying to resolve the dispute for over a year, but the positions have so far remained unchanged.

What does Moscow expect from Russia-EU summit?

An EU diplomatic source said that, if it were not for the differences of opinion regarding official passports, the agreement could be signed in mid-March.

Russia does not agree with this approach. According to a Russian diplomatic source, Moscow has already reduced the number of blue passport holders (granted the right of visa-free travel) from 150,000 to 18,000, by including only holders of the biometric official passports in this preferential category.

Meanwhile, the EU insists that the agreement on visa facilitation already provides additional benefits for officials. If the agreement enters into force, it will be easier for officials to receive multiple-entry visas for lengthy stays.

The Russian side, however, does not consider this to be a proper argument.

"If we cannot agree on such a compact and trustworthy category as official passport holders, what can we say about the prospect of visa-free travel for all groups of citizens," the Russian diplomat said.

European officials see one possible way out of the negotiations impasse: Russia and the EU could conclude an agreement on visa facilitation without the service passports point, but also sign a memorandum or letter of intent that states the issue requires the parties to return to it later.

A Russian diplomatic source warned in advance: "Moscow will not accept such a scenario. ‘Later’ can be protracted a lot."

The implementation of a list of "common steps" toward a complete abolition of visas — the second negotiating track — is also proceeding with difficulty. Earlier, Russian officials had expressed the hope that a visa-free regime with the EU would be in place for the Olympic Games in Sochi. Now, sources in the Russian Foreign Ministry admit that meeting that deadline is unlikely. According to one source, officials in Moscow now hope that visas can be abolished by the end of 2014.

One European diplomatic source, however, cautioned that this date should not be considered final.

"We are totally against any artificial deadlines," he said.

The two parties will be able to continue the discussion on a visa-free regime in the middle of March, during government-level meetings in Moscow, as well as in early June, at the next EU-Russia summit that is likely to be held in Yekaterinburg.