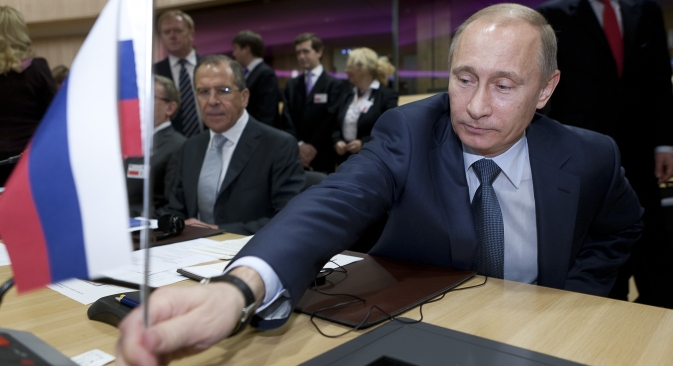 Russia will continue to maintain an active policy in the international arena through modern economic diplomacy and soft power, seamlessly embedding itself in the global information space, said President Vladimir Putin, commenting on Russia’s updated Foreign Policy Concept, which was presented to members of the Security Council at a meeting in the Kremlin in mid-February.

"Russia will continue to pursue an active and constructive line in international affairs. Its weight and influence in the world will increase," Putin said, adding: "The basic principles of Russian foreign policy remain the same."

According to Putin, Russia is interested in creating a favorable environment in which to achieve internal development and address social and economic challenges.

"That means, above all, openness, predictability, pragmatism, and the pursuit of national interests without any confrontations in accordance with the role of the United Nations and the rule of international law," Putin said.

The new concept takes into account the global changes that have occurred in recent years, in particularly the global financial crisis, the Arab Spring and its aftermath and ever increasing globalization.

The article is abridged and first published in Russian in Rossiyskaya Gazeta.

The priorities of Russian foreign policy have been clearly established and aligned. First of all, they concern relations with the countries of the former Soviet Union. The document highlights the importance of cooperation with the C.I.S. in terms of foreign policy priorities.

It underscores the need to strengthen the proposed Eurasian Union and multilateral ties between members of the former Soviet Union, from which we can conclude that Russia's approach to global and regional issues places the accent on relations with its immediate neighbors.

As for relations with the West, the emphasis is more on the pragmatic aim of strengthening Russia's economic potential.

It should be noted that despite the ongoing talk in recent years of the need for Russian diplomacy to reorientate itself in an Asian direction, relations with Western countries are still prioritized in the hierarchy of Russian foreign policy objectives: in first place is the C.I.S., followed by the West, and only then comes the Asian vector of cooperation.

In my view, the tonality of the present concept highlights the fact that the world is full of threats. The document highlights in particular that the risks are becoming harder — and sometimes almost impossible — to anticipate.

In these conditions, the fundamentals of each individual country take precedence, namely the idea of national identity.

To a large extent, global security today depends on a precise formulation of this concept. The document expressly notes that the world is a place of interaction, which may entail clashes and competition between different national identities. This, in my opinion, is what distinguishes Russia's new foreign policy from the old.

For a long time, Russian diplomacy, and the Russian authorities in general, focused on pragmatism: less ideology, more targeted action and interests. Now some rethinking is being done. Yes, pragmatism is important, but without a value-based, ideological foundation foreign policy cannot develop.

At this stage, the question of framing a set of specific principles to define national identity remains open. Only the contours have been outlined.

Of all the new regulations, the introduction of the concept of soft power stands out; in actual fact, it is a projection of one's own identity onto other countries and the rest of the world. The strong accent on soft power is indirect evidence that Russia intends to shape its ideological and moral baggage in such a way as to be able to offer it as an alternative in the global market of values. Economics in this respect will not play second fiddle.

Russian diplomacy, as framed in the concept, will continue to work actively to promote Russia's national economic interests. All the more so at a time when the risk of a major war is low and the probability of there being one is small, while other forms of confrontation, particularly the struggle for economic influence, are becoming more acute.

Fyodor Lukyanov is chairman of the Council on Foreign and Defense Policy of Russia.