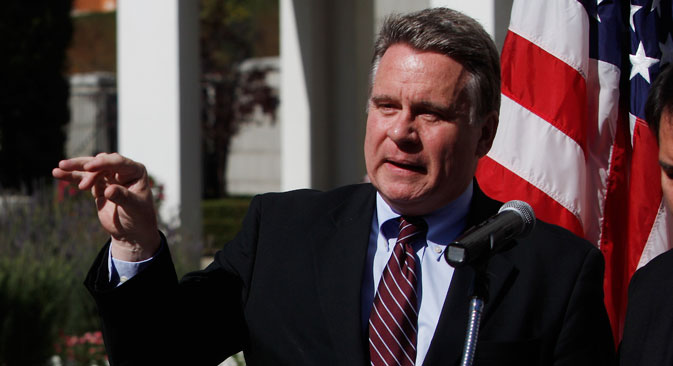 Smith believes the refusal was retaliation for the passing of the Magnitsky Act. Source: AP

Despite having traveled to Russia before and intervention of the U.S. Ambassador to Russia, Congressman Chris Smith was denied a Russian visa.

According to Smith, he had previously traveled to the Soviet Union and Russia, but in February 2013 he was denied a visa, despite intervention by U.S. Ambassador to Russia Michael McFaul. The congressman said that no reason has been given; however, Russian Ambassador to the US Sergei Kislyak reportedly said that the decision had been made in Moscow, not at the Russian Embassy in Washington.

Smith believes the refusal was retaliation for the passing of the Magnitsky Act. Nevertheless, the congressman plans to reapply for a visa. He said he had previously been denied visas to China, Cuba and Belarus. He had planned to travel to Russia to discuss the Dima Yakovlev Law, which bans Americans from adopting Russian children and was passed partially in response to the Magnitsky Act. Smith said he shared the legitimate concerns of the Russian officials and had prepared a resolution highlighting the death of 19 Russian children adopted by American parents.

The Magnitsky Act was passed in December 2012 to impose sanctions on Russian officials allegedly complicit in the death of lawyer Sergei Magnitsky, who died in jail in 2009.

Smith had long been interested in the fate of the deceased lawyer: in 2011, on the second anniversary of Magnitsky’s death, a briefing was called in Washington under the auspices of the politician, hosting a performance of “One Hour Eighteen,” a documentary dedicated to Magnitsky’s final moments.

Alexei Pushkov, chairman of the State Duma's International Affairs Committee, said that it was the Magnitsky Act passed by the Congress that created a new area of tension between Moscow and Washington—visa issues. Russia made it clear from the very start that the adoption of the bill in the U.S. would have consequences. “But we didn’t start this process,” Pushkov said.

He added that the issuance of visas in the framework of the relationship between Russia and the U.S. depended entirely on Washington’s policy, reported Interfax.

Smith is also known for paying close attention to the situation around Ukraine’s former prime minister Yulia Tymoshenko who is currently serving time for abusing her position. Smith has repeatedly called for her release.

In January 2013, the Russian Foreign Ministry confirmed that Moscow had issued and extended its own classified blacklist of American citizens, unofficially dubbed the “Guantanamo List.” It there has been no official statement as to who appears on the list, but according to media reports, it contains about 60 names on it.

The “Guantanamo List” reportedly includes officials implicated in the prosecution of Russian nationals Viktor Bout and Konstantin Yaroshenko. The list was extended as Congress members sponsoring the Magnitsky Act were added to it. The list was further extended to include the U.S. citizens who reportedly violated the rights of children adopted from Russia.

Based on materials from Rossiyskaya Gazeta, Interfax, Lenta.ru, Kommersant and Komsomolskaya Pravda.