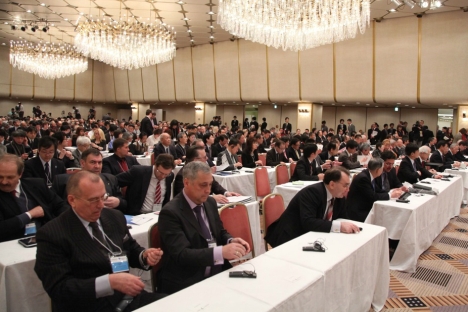 The Russian-Japanese forum “Areas of Cooperation: Business. Technology. Culture,” which was held in Tokyo on Feb. 28, has the potential to become a permanent platform for dialogue between the two countries, according to representatives of forum sponsors Russian daily Rossiyskaya Gazeta and Japanese newspaper Mainichi.

Russia and Japan step up bilateral ties at Russian-Japanese Forum

Thematic sessions during the forum covered infrastructure, IT, space, culture, sports and the development of resources. Alongside the plenary session, these smaller meetings provided a platform where important issues and urgent problems could be raised.

Viktor Ishayev, Minister of Development of the Russian Far East and Presidential plenipotentiary envoy in the Far Eastern Federal District:

The Far East is Russia’s gateway to the Asia Pacific Region. But in order to be a visible point of contact, its social and economic development must be accelerated. The Far East is also a contact zone that ensures the integration of Russia into the Asian region.

The Russian side is considering important tasks in the development of the Far Eastern regions. Japan can be useful and interesting for Russia on this issue. If possible, I would like to see a broad dialogue on all levels with a view to deciding how we can build up and develop the Far Eastern regions together for the benefit of Russia and Japan.

Yevgeny Afanasyev, Ambassador of the Russian Federation to Japan:

Economic interaction between our countries has become more diverse in terms of the structure of the industries covered, the forms of cooperation and geography of the regions involved. New spheres of cooperation that meet the tasks of modernizing the Russian economy are gaining importance.

Siberia and the Russian Far East are of course the key areas of our cooperation.

Mr. Mori has called for more active contacts between the heads of state. He is absolutely right that it has been a long time since a Japanese prime minister has visited Russia. So far, the results of our cooperation are not entirely evident. We have made progress in the economy, but the same cannot be said about politics. The fact that Mori noted our political relations have picked up is to me the key point in his speech.

Alexander Panov, Ambassador and rector of the Diplomatic Academy of the Russian Ministry of Foreign Affairs:

People in Russia and Japan know little about what is happening in each other’s country. It is the task of forums like this one to involve broader social strata in the exchange of information. All the more so since Rossiyskaya Gazeta and Mainichi are important and authoritative publications.

I have often noticed that if our media report anything about Japan, it is usually an earthquake or a tsunami. Japanese journalists show similar things. Very little is written about the prospects of our relations. Although there are many positive things about our relations, they seem to escape public attention.

This forum is important because it creates a platform for experienced specialists and experts to come together. They express their opinions and the result of these exchanges is mutual understanding. Mutual understanding is the first step.

Without mutual understanding, you cannot move on to the following stages in developing relations between the two countries. Russia is a great space power with vast experience. For me as a specialist in space medicine, this appears to be the most promising area.