What does Chávez's death mean for Moscow? 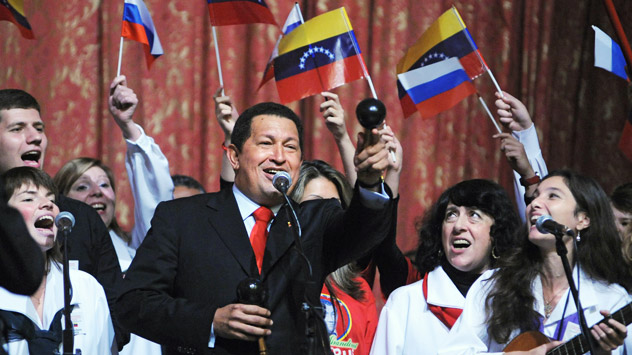 The late Venezuelan President Hugo Chavez during his visit to Russia. Source: ITAR-TASS

The late Venezuelan President Hugo Chavez died of cancer on Mar. 5. The confirmation about his death came from Nicolás Maduro, who was named his vice president. If Maduro is elected president, Moscow may continue close relations with Venezuela.

The late Venezuelan President Hugo Chavez died of cancer on Mar. 5. The confirmation about his death came from Nicolás Maduro, who was previously named his vice president and his successor. Under the Venezuelan constitution the next presidential elections should be held within 30 days.

Photo gallery: Adios to Hugo Chavez, commander and a longtime friend of Russia

If Maduro is elected president, Moscow may continue close relations with Venezuela, according to experts. Meanwhile, a postponed election could benefit the opposition and spell disaster for Russian contracts in Venezuela.

Chávez, 58, died  in a military hospital in the Venezuelan capital of Caracas, where he had been taken from Cuba in mid-February after two months of treatment.

Chávez made a public announcement about his illness in July 2011. His personal doctor, Salvador Navarrete, said then that Chávez’s life expectancy was up to two years.

In October 2012, Chávez won his fourth presidential election in a row, but his inauguration never took place because of the disease; thus, the idea to build “socialism of the 21st century” in Venezuela was never realized.

Chávez will go down in history for his ambitious attempts to create a powerful anti-imperialistic coalition in Latin America.

He openly challenged his country’s main trade partner, the U.S., by nationalizing the oil assets owned by Exxon Mobil, ConocoPhillips and Chevron, alongside banks, gold mines and power plants. Chávez once referred to President Obama as a “clown,” and to President Bush as “the devil.”

Venezuelan Vice President Nicolás Maduro, 50, whom Chávez named his successor before leaving to get treatment in Havana, is thought to have an even more stringent anti-American stance than Chávez, and will likely continue Chávez’s policies.

If he wins an early presidential vote, Moscow will look to build on its warm relations with Caracas.

Maduro, formerly a bus driver and metro union activist, rose to be foreign minister and, then, vice president. Maduro has been a loyal supporter of Hugo Chávez since the early 1990s.

Chávez’s political career started with a failed military coup in 1992, prompted by discontent with the economic policy of Venezuela’s leadership at the time. After two years in prison, Lt. Col. Chávez founded the social-democratic movement The Fifth Republic. Four years later, he won his first presidential election.

In the mid-2000s, Chávez began a campaign to form an anti-imperialistic front, declaring the creation of an “axis of good” with his closest allies — Cuba and Bolivia.

It was at this time that Caracas and Moscow intensified their relations, mostly in the military and technical sector. The process was stepped up in 2006, after the U.S. refused to supply arms and spare parts to Venezuela.

“Venezuela opened the doors to Latin America to Russia, by way of purchasing large amounts of Russian arms and engaging Russian companies in gas and oil projects in Venezuela, as well as other projects,” says Vladimir Sudarev, deputy director of the Institute of Latin America at the Russian Academy of Sciences.

The Venezuelan stock of orders was estimated at $6–7 billion in early 2012 (the total did not include the $4 billion loan given to Caracas to promote military and technical cooperation).

“When it comes to the military and technical sector, we have reached the ceiling,” Sudarev says. “Venezuela doesn’t need any more arms, and Russia should take it easy in order to avoid accusations of pushing an arms race in Latin America.”

The energy sector is another priority for Russia. In 2010, Venezuela’s PDVSA and Russia’s National Oil Consortium (founded by Russia’s top five oil majors) signed a deal to develop the Junin-6 block located in the Orinoco river basin — the world’s largest accumulation of oil and bitumen. Oil production started in September 2012.

Rosneft plans to start developing a Carabobo-2 oil block in the same area in two years. The two blocks each produce up to 450,000 barrels of crude oil per day. Inter RAO has announced plans to build a 300 megawatt power plant in Venezuela.

“It was Chávez who made the fundamental decisions that created a favorable climate for Russian energy companies and manufacturers,” says Vladimir Sudarev.

Following Chávez’s death, the country will have a pre-term presidential election. The sooner Venezuela holds this election, the better chance Chávez’s successor Maduro has of winning, Sudarev says.

“The opposition showed its muscle in October, when Henrique Capriles polled 45 percent of votes [and lost to Chávez, who had 54.5 percent of the vote]; but it’s fragmented, it has no single candidate, while Chávez’s supporters control the media,” says Sudarev.

It will be harder to predict the results of the vote if the election is postponed. The opposition can also benefit from a possible economic slump. In 2012, consumer inflation was as high as 21 percent — the seventh-worst result in the world after Belarus, Syria, Sudan, Argentina, Iran and Ethiopia.

If the opposition should come to power in Venezuela, Russia could see a favorable political environment for its companies — created largely through Chávez’s efforts — deteriorate.